Porsche's latest Boxster range swaps its atmo flat sixes for turbocharged fours. Is less really more, or has the Boxster been emasculated?

WHAT IS IT?
Twenty years after it first appeared, the Porsche Boxster goes turbo. Many of the ingredients remain the same but make no mistake, the 718 Porsche Boxster is the biggest leap forward in two decades of Porsche's hugely successful roadster.

WHY WE'RE TESTING IT
Porsche flew us halfway round the world for an early drive in the 718 Boxster. It's one of the most intriguing cars to be launched this year and we needed to know if going turbo had seen the Boxster sell out or step up.

THE WHEELS VERDICT
Objectively, the 718 Boxster steamrollers its predecessor. It's faster, lighter, more agile and more efficient, throwing down the gauntlet to rivals with performance that's hard to draw level with. Despite this, a little of the magic that makes Porsche sports cars so special has gone, and for some that'll make all the big numbers look a bit hollow. Viewed in isolation, however, it's hard not to be impressed at how Weissach has executed the transition to downsizing. It still merits a solid buy recommendation from us. 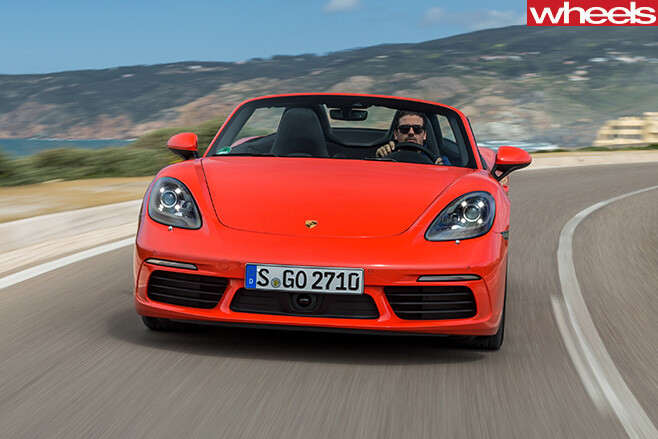 THE WHEELS REVIEW
PORSCHE has ruined the Boxster. The switch to from six-cylinder naturally aspirated engines to four-cylinder turbocharged units is a disaster. That's what many motoring writers would have you believe.

You'll see their faces on the video reviews, brows knotted in impotent disbelief at how the latest 718 Boxster doesn't sound anything like the old car and doesn't drive like it either. They'll sniff at the engine response and chunter on about the drip-drip diminution of all that they hold dear, such as granularity of steering feel, fibrous response at the contact patch and endless reams of similar guff.

None of that particularly matters and here's why. The Boxster is the entry-level Porsche sports car. A statistically insignificant number of 718 Boxster buyers will have previously owned a Boxster, and the rest will have no frame of reference for drawing comparisons with what went before. We'd be prepared to bet they'll absolutely adore the 718, largely because it's such a crushingly competent package. 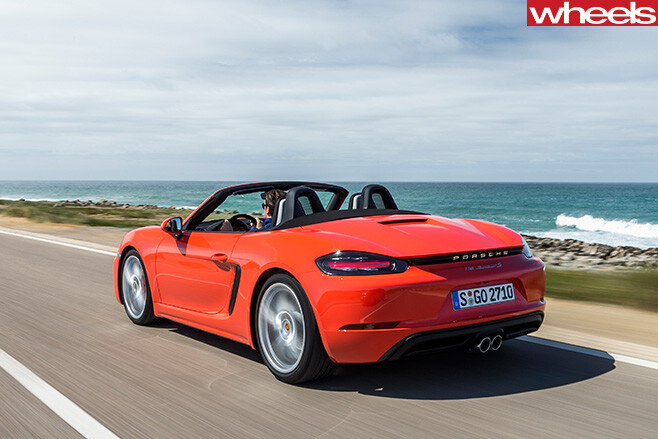 Yes, it has changed hugely. In the face of increasingly stringent emissions regulations, Porsche has had no choice but to switch to turbocharging. The old atmo lumps had been squeezed until the pips were squeaking and there wasn't anywhere left for Porsche to turn, in order to realise meaningful emissions cuts, than to downsize the engines and switch to forced induction. You don't have to like it but that's the way the industry is moving. Whoever adapts best wins, and Porsche has traditionally been rather good at ingenious adaptation.

What's wholly un-Porsche is that the company has felt the need to overcompensate massively for short-changing customers a pair of pots. That's why both the 2.0-litre and 2.5-litre engines offer a healthy step up in power and a massive step-change in torque compared with their predecessors. The Boxster is good for 220kW with a fat 380Nm of torque on tap, fully 100Nm more than the previous entry-level Boxster. Spring for the Boxster S and the numbers ease out to 257kW and 420Nm.

The torque is the key to how these cars drive. Whereas in the old Boxster, you'd willingly ping it off its redline to hear the engine note harden and yowl, and then rue the fact that second gear was taking you over 130km/h and toward an impending appearance before the local magistrates, the 718 rewards a less frenetic approach. Whichever engine you choose, peak torque arrives at less than 2000rpm and lasts to 4500rpm, tailing off gently thereafter. Therefore, you tend to upshift early and plug in low again. That torque has solved the Boxster's perennially over-long gearing issue. 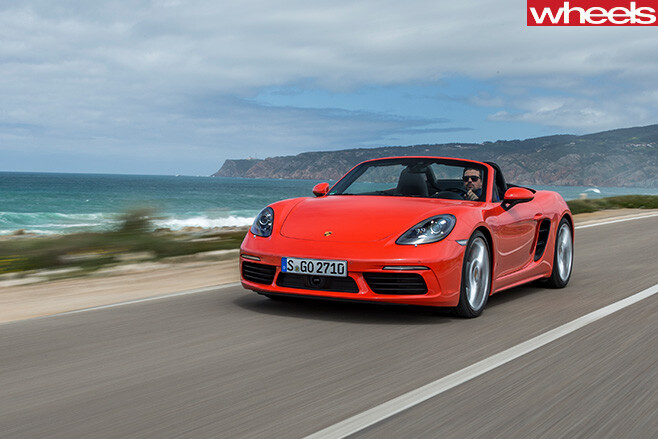 The turbo installations differ markedly, too. The 2.0-litre engine features a wastegate which, when combined with the Vario Cam Plus action on the exhaust, allows for incredibly subtle management of the ramping of boost pressure. The 2.5-litre engine also features this system but augments it with Variable Turbine Geometry (VTG) as seen in the 911 Turbo.

The whole rear end of the 718 has been beefed up to handle this added muscle, with heavier duty springs and dampers, a half-inch wider track, and meatier four-point engine mounts. The Boxster is quick, with the PDK gearbox 90 percent of buyers will choose teaming with launch control to catapult it to 100km/h in 4.7 seconds. The Boxster S is now ballistically rapid. Chew on these numbers. It gets to 100 kays in 4.2 seconds, the same as a 996 Turbo. It'll lap the Nurburgring in 7m 46s, fully 16 seconds quicker than its predecessor and that's neck and neck with a 996 GT2. Need a more recent frame of reference? It's only two seconds a lap slower than the garlanded Cayman GT4.

The ride quality is better, lateral grip has improved, the brakes are bigger and the steering is 10 percent more direct, thanks to the steering system adapted from the 911 Turbo. That's the good news. The bad? Neither engine has the aural fireworks to raise the hairs on the back of your neck. Of the two, the 2.0-litre is probably the better sounding, lacking the synthetic edge of the 2.5 but, at risk of being excommunicated by Porsche, at certain frequencies it does a pretty good impression of a Subaru WRX lump. At idle, and especially with the optional sports exhaust engaged, you can clearly hear the firing order, a staccato and slightly unpleasant pulsing. There's a sound symposer in the bulkhead behind the seats that injects a bit of amplitude into the sine waves and offers a lovely bass tone burble but there's not a lot in the way of top notes on offer. What's more, there are some curious acoustic frequencies where manually clicking down a gear actually lowers the pitch of the engine note.

The odd acoustics can be forgiven for the sheer amount of lug on offer out of corners. Punt the car into a bend in what seems a hopelessly high gear, apply gas, wait a moment for the turbo to spool and it delivers a sinewy surge of drive. It's quite addictive and certainly something you'd take great joy in learning how to get the best from. I had the opportunity to follow Walter Röhrl in a Boxster S on part of the route and can confirm that, for the 12 seconds or so I had him in my gunsights, the 718 Boxster S is spectacularly composed at the limit. The stability control calibration is excellent, allowing a smidge of rear-end slip before gently stepping in. Specify the Sport Chrono system and you also get PSM Sport mode, which affords more leeway in vehicle yaw, the system re-engaging if it thinks you've really unleashed the power of ineptitude. Hold the button in for a few seconds and you're on your own. For the first time on a Boxster, PASM Sport suspension is offered as an option for the S model. This combines a 20mm reduction in ride height with firmer ride. Porsche has also improved the active suspension, delivering a more marked differentiation between comfort and sport modes. Specify the Sport Chrono pack and the manettino-like dial on the steering wheel offers an Individual mode in addition to the standard Normal, Sport and Sport Plus settings. As before, Sport Plus is best left for track use, with Sport offering a rather less antisocial powertrain characteristic. The damping is excellent, and even with the optional 20-inch P Zeros fitted and some spectacularly scabby minor roads negotiated, little in the way of harshness filters to the cabin. Body rigidity is similarly impressive and in that regard, it's hard to see how the forthcoming 718 Cayman will deliver a whole lot more to keen drivers.

The styling? I'd give that an unreserved thumbs-up. The front end is sharper, with angular swages running down the bonnet, bigger air intakes and a bi-xenon lights backed up with LED daytime running lights. A full LED light kit is optional. The flanks get bigger twin-louvred intakes while the rear end gets lovely 3D-effect Porsche lettering along with the now familiar excess of fonts. Badge delete is your friend here. The larger blade spoiler now has a greater aerodynamic effect and no longer splits the rear light clusters. Porsche's designers aimed at making the Boxster look lower, wider and more aggressive and they've nailed that assignment. The interior looks familiar. There's a new 918-Spyder style 375mm steering wheel that looks the business, with the option for a smaller 360mm item. Raised air vents give the dash rolltop an edgy industrial look and there's a new infotainment system. Where most markets have to specify sat nav as an expensive option, here in the lucky country, we get it as standard along with, somewhat mystifyingly, seat and steering wheel heaters. We also get the Porsche Dynamic Lighting System, a digital radio, auto dimming mirrors inside and out, cruise control, park assist front and rear, 14-way electric sports seats with memory package, a no-cost option 64-litre fuel tank, and voice control for the Porsche Communication Management unit.

Because the PDK-equipped base car manages to duck under 7.0L/100km it nets a luxury-car tax sidestep which its manual sibling doesn't enjoy. This means that you'll need to add a mere $1333 to the price of the $113,100 manual model to net a PDK-equipped car. From there it's quite a jump to the $143,400 Boxster S manual, with the PDK in this instance adding another $4900 to the asking price.

A better-looking car with a smarter level of finish, far more grunt available all the time and lower running costs? The 718 unquestionably delivers more car for your money than ever before. So why am I left feeling so unmoved by it? 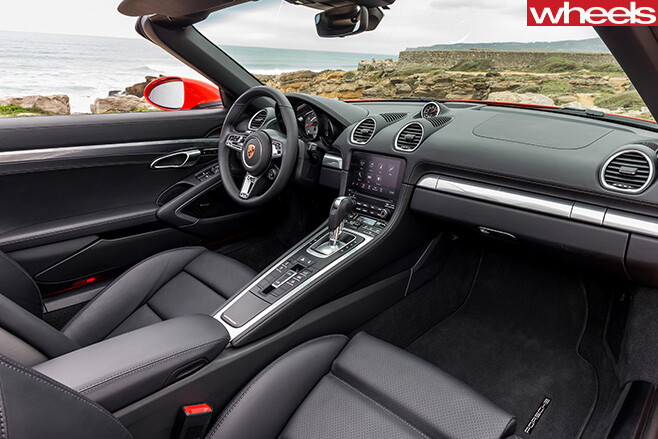 Probably because I'm one of the couple of percent who cares about the esoterica, the special things that distinguish a Porsche sports car. Nothing elitist about that: it's actually quite a sad and nerdy thing. But maybe that was the reason why the 718 Boxster didn't paint a big grin on my face. The vast majority of you will probably disagree and in that regard, Porsche has undoubtedly done the right thing. It's hard to think of a car that has undergone such a drastic difference in personality between generations, and while I found myself  respecting the loping, rangy utility of the 718 and marvelling at the engineering trickery used to integrate turbocharging, I found myself missing the yowl that the old car made as it approached the redline.

Still, it would be rapidly receding yowl in the current car's rear view and it's hard to argue with the sheer effectiveness of the 718. As an exercise in making the best of a tough brief, it's hard to fault.