The 2016 Porsche Macan GTS will slide into the German brand’s medium SUV line-up between S and Turbo. It’s the sportiest Macan of all, according to Porsche.

WHAT IS IT?
Medium-size, five-seat, high-performance SUV manufactured in Germany and based on the same Volkswagen Group MLB component matrix as the Q5 and other larger Audi models.

WHY WE’RE TESTING IT
Porsche recently introduced the Macan GTS to world media alongside the updated 911 Carrera and Carrera S, but its Australian intro isn’t until April 2016.

MAIN RIVALS
The Macan GTS is priced like one-size-larger SUVs from other A-grade German brands. Mercedes-Benz GLE400, with its feisty and refined twin-turbo 3.0-litre V6 is the closest match. Same-size quasi competitors such as the Audi SQ5 and Volvo XC60 T6 are less powerful and less costly. While fearsomely fast on the right (perfectly surfaced) road, the Macan GTS lacks the ride comfort appropriate in an SUV and is costly for its size.

THE sporty SUV is where the immutable laws of Newtonian physics collide head-on with a car maker’s understandable desire to profit from satisfying the misguided desires of an ever-swelling cohort of customers. It’s self-evident that height and heaviness are serious impediments to the achievement of handling agility and accelerative ability. Still, some companies do make a better job than others of taking clumsy SUV material and turning it into something almost elegantly athletic. Which brings us to the Macan GTS… 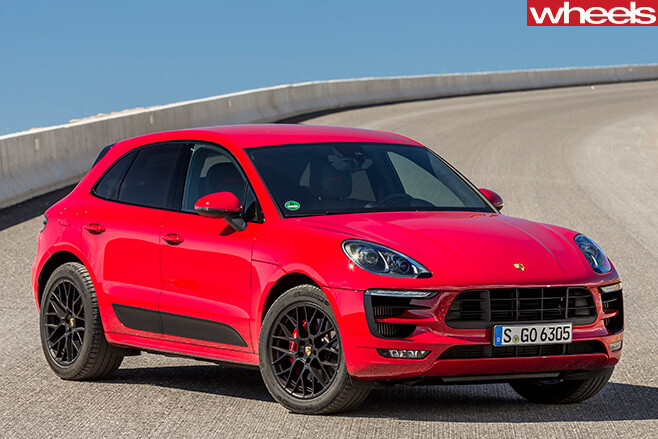 This latest addition to Porsche’s medium-size SUV line-up, due to reach Australia next April wearing a $109,800 price-tag, can be eye-wideningly rapid. One of the exercises on the program at the international launch is chasing a well-driven 911 pace car up and down a snaky and silky smooth 4.2km stretch of blacktop on the island of Tenerife.

As well as giving us the chance to hear the over-run cackle and pop of the optional sports exhaust of the new Carrera S ahead, the experience confirms Porsche’s claim that the GTS is the sportiest Macan of them all. It corners without too much roll or any hint of skittishness, the broad tyres on its dark-painted 19-inch wheels deliver ample grip, the steering is swift and accurate, and the brakes are strong.

The GTS is rapid, even though it doesn’t have the power to match the Turbo with its 294kW twin-turbo 3.6-litre V6. Instead, the GTS has a 265kW version of the twin-turbo 3.0-litre V6 from the Porsche Macan S, teamed with the seven-speed dual-clutch transmission and all-wheel-drive hardware used in all Macan models. The GTS engine’s small increase in boost yields a modest 15kW increase. Porsche concentrated more on boosting the GTS’s curve-carving credentials. Its suspension is 15mm lower and the setting of its standard adaptive damping system is sportier.

While effective on a flawless road surface, the suspension of the Macan GTS isn’t happy elsewhere. The PASM – Porsche Active Suspension Management – system has three basic settings, none of them right for roughness. ‘Comfort’ is busy on small irregularities, but exerts inadequate control of the body motions caused by heaves and humps. ‘Sport’ fails to completely quell this floatiness, while increasing jiggliness. ‘Sport Plus’ sorts the handling, but makes the ride annoyingly brittle. In a five-seat passenger-carrier such as a Macan, such a range of choice is difficult to forgive.

Speaking of choice, wouldn’t it be smarter to pick something with attributes and abilities similar to the Macan GTS, but without its handicaps of heft and height? The lower, much lighter and sportily entertaining new Volkswagen Golf R wagon, for example, has the same number of seats, equivalent cargo space, all-wheel-drive and similar performance… and is, in round figures, $50,000 less costly.