WHAT IS IT?
The second generation of Renault’s Koleos mid-size SUV - a hugely-important model for the French brand in this country, considering the ever-swelling popularity of SUVs in Australia.

Offered in three grades (Life, Zen and top-shelf Intens), the 2016 Koleos range occupies a price bracket spanning from $29,990 to $43,490 and is offered in front-wheel drive and all-wheel drive configurations.

A single engine is offered for the time being – a naturally-aspirated 2.5-litre petrol four-pot with a modest 126kW and 226Nm – and all models are equipped with a CVT automatic as standard. 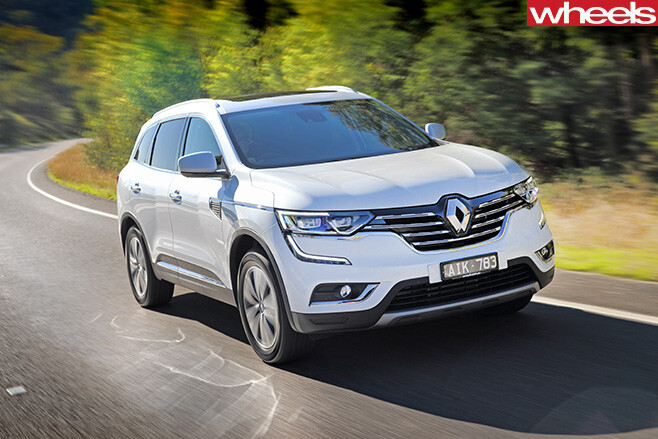 Why are we testing it: Because its predecessor was so undercooked. With even empty-nesters opting for high-riding SUVs, the success of the Koleos – and Renault Australia’s bottom line - hinges greatly on whether it is any good.

Renault globally recognises this: which is why they’ve fast-tracked the all-new Koleos to Australia ahead of every other market.

THE WHEELS VERDICT
The Koleos has morphed from ho-hum to hum-dinger, now boasting plenty of space in a more attractive and well-equipped package. It’s at its best in its highest specification, where it offers loads of mod-cons for an attractive price, but its powertrain lacks pep when the speed limit rises. THE WHEELS REVIEW
The Renault Koleos is like a delinquent student who’s decided to quit hanging behind the bike shed and start sitting up the front of the class. The first-gen Koleos was a dud, but an all-new 2016 model has arrived in Australia and the improvement between it and its predecessor is massive: so much so that the Koleos has gone from being a genuine dunce to having a good shot at becoming dux.

The old car was a backmarker in the ever-competitive and increasingly-important medium SUV segment, with frumpy styling, antiquated infotainment and sub-par quality. The last time we put a Koleos through the Wheels wringer we complimented its ride and off-road nous, but lamented virtually everything else. The new Koleos addresses the overwhelming bulk of our criticisms.

Sharing its platform, powertrain and drivetrain with its corporate cousin the Nissan X-Trail, the new Koleos is longer, has more cabin between the axles and is substantially bigger on the inside than the superseded model.

There’s no seven seat configuration offered – nor will there ever be, according to Renault Australia – but as a five-seat rival to the likes of the Hyundai Tucson, Honda CR-V and Mazda CX-5, the Koleos can finally boast competitive dimensions, both inside and out. And it’s inside where the Koleos makes its most convincing play. Roomy and well thought-out, the Koleos has a distinct whiff of premium-ness compared to the X-Trail that it’s based upon.

All models get a customisable TFT screen in place of traditional analogue instruments, mid-grade and high-grade variants score leather (though it’s synthetic on the mid-spec Zen) and the top-shelf Koleos Intens ships with a choice of leather upholstery colours, a 8.7-inch portrait touchscreen display, heated and cooled front seats, power tailgate and LED headlamps.

The front seats are spacious and offer up a great view of the road ahead, while the back seat has enough leg, knee and headroom for even six-footers to be comfortable. A pair of USB charging ports for backseat passengers are provided on the Intens grade, but fans of smartphone mirroring may be disappointed that no Koleos model offers Apple CarPlay or Android Auto integration. At least sat-nav is standard.

The Koleos offers plenty of room for cargo, whether it’s a brace of boogie boards or a pram (or two) for your brood. Luggage capacity measures in at 458 litres with the seats up and 1690 litres with the 60/40 split second row dropped. 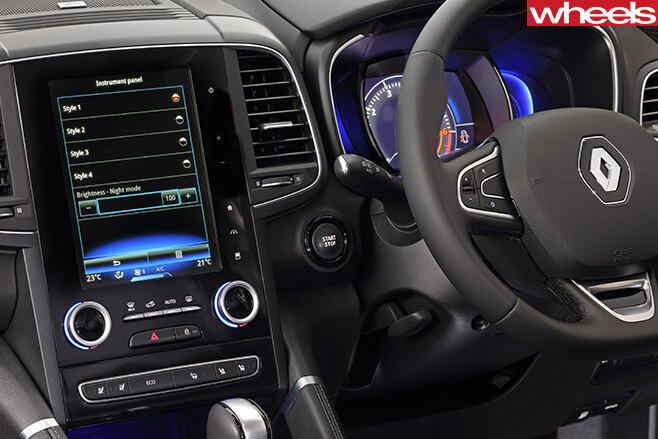 There are a few black marks though, among them being a lack of under-thigh support in the seat bases, cheap-looking window switch blocks shared with the X-Trail and squeaky boot plastics.

Renault also doggedly refuses to put the cruise control/speed limiter toggle switch in an area of the cabin that’s easily visible, instead hiding it low on the centre console behind the shift lever – forcing drivers to take their eyes off the road as they search for it.

The Koleos’ 2.5-litre petrol powertrain lacks oomph. Considering rival Mazda manages to squeeze 138kW and 250Nm out of a similar displacement for its CX-5(compared to 126kW and 226Nm for the Koleos), that puts Renault behind the eight-ball when it comes to driveability.

It feels less hamstrung in front-drive form, but if you’re opting for the full-fruit Koleos Intens then all-wheel drive is the only drivetrain configuration available. It brings a traction advantage on slippery surfaces thanks to its ability to send up to 50 percent of torque to the rear wheels, but the rest of the time its extra weight simply slows down proceedings.

A CVT is the only gearbox on offer, and that puts another crack in the Koleos’ façade. On the hilly and twisty launch route the combo of engine and drivetrain wasn’t happy, with the latter forever hunting for the right ratio and the former droning away as it struggled to deliver the pace required. Need to overtake? Allow plenty of space for a run-up. On highways the gearbox becomes more amenable, quickly settling into a stable ratio and a low rpm that promotes efficiency. Our on-test average of 11.1 l/100km in an AWD-equipped Intens was well above the 8.3 l/100km claim, but we’ll blame the hills for that one.

If that puts you off, consider that a diesel auto will be added to the family around mid-2017.

The Koleos irons out truly lumpy surfaces with ease, but minor, low-amplitude bumps and corrugations reveal a slightly fussy and fidgety suspension. There’s plenty of body roll in corners (as you’d expect for an SUV), but the Koleos keeps its body movements in check on all but the most diabolical of surfaces.

The steering, however, is dull and overly-assisted. But few will care when they scope the Koleos’ pricetag.

The $29,990 price of entry is slightly higher than the average midsize SUV, but in higher grades (where the bulk of buyers tend to shop) the Koleos convincingly undercuts its chief rivals with a $43,490 pricetag for the range-topping Intens.

That’s cheaper than its underwhelming predecessor – and cheaper even than the X-Trail Ti petrol upon which the Koleos Intens is based, and a hell of a sharp deal considering the equipment on offer.