The next Renault Megane GT, which Australia will see in October, shows the French understand evolution as well as revolution

The next Renault Megane GT, which Australia will see in October, shows the French understand evolution as well as revolution

WHAT IS IT?
A good-looking European C-segment front-drive hatchback, featuring a lively turbo drivetrain and some advanced or interesting tech for the class.

WHY WE’RE TESTING IT
With Clio and Captur, resurgent Renault is winning hearts and minds. Will the new Megane, due here in the second half of 2016, add to the brand’s momentum? Driving the Megane GT, the only Australia-specification model on offer at the recent international launch in Portugal, suggests that it will. 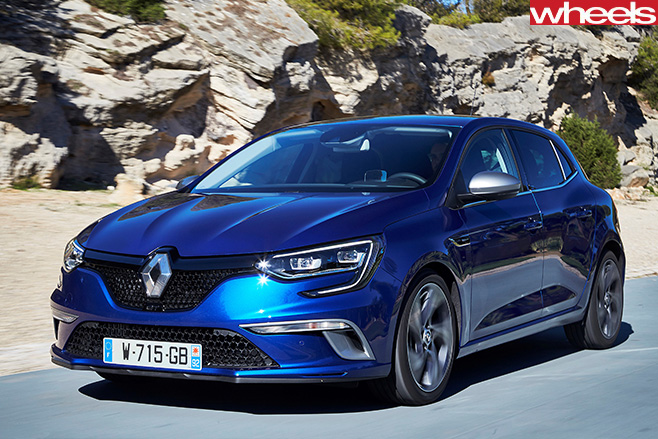 THE WHEELS VERDICT
The GT is likeable rather than lustworthy, but it does promise a much-improved line-up of less costly Meganes from the big Frenchie. All Renault Australia has to do is price and specify them for success.

THE WHEELS REVIEW
THERE’S a lot of space (and plenty of Espace) in the new Megane GT. The fourth generation of Renault’s C-segment hatchback has grown in almost every direction, creating a car with a wider cabin, more rear-seat knee room and one of the biggest cargo compartments in its class.

Nothing unusual so far, but the source of the hardware that sets the sporty GT apart from more mundane Meganes is surprising. Its drivetrain, steering rack and steering rear axle all come from Renault’s big new crossover.

Like the Espace, the new Megane is built using the Renault-Nissan Alliance’s CMF (Common Module Family) component matrix. CMF is obviously a fairly flexible system: the crossover’s wheelbase is more than 200mm longer than the hatch’s.

The Espace is built only in left-hand drive, yet the ambidextrous Megane uses the same steering ratio and rack-mounted electric-assist system. It gives the GT 2.3 turns lock-to-lock instead of the 2.9 of standard models. The Megane GT’s ‘4Control’ rear axle, a torsion beam with a 30kg electric micro-steer system, likewise comes from the Espace. For the Megane GT, it’s retuned by Renault Sport for handling agility, not just a tighter turning circle. 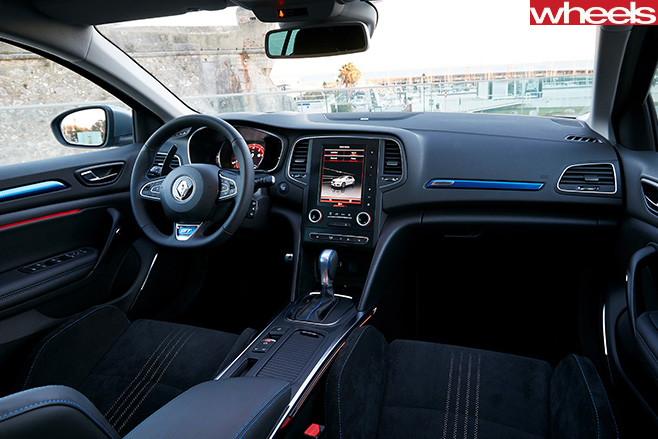 The GT’s 151kW 1.6-litre turbo-petrol is practically identical to that in the Clio RS200. But Renault Sport exec Regis Fricotte says the GT’s drivetrain is most closely related to the Espace, which uses the same seven-speed dual-clutch transmission. The hot Clio has instead a six-speed dual-clutch.

While the ways in which the GT differs from other Meganes are important, so are the things it has in common: stand-out exterior style and an inviting interior.

The new Megane’s longer, wider, lower dimensions must have helped, but Renault’s designers deserve credit for the car’s stance and shapeliness. It’s especially attractive from the rear, a view that emphasises the body’s broad shoulders and distinctive LED lighting strips.

High-grade Meganes (the only kind at the international launch in Portugal) will come with an instrument panel featuring a Volvo XC90-like portrait-oriented touchscreen in its middle. The second thing you notice, after the display, is the huge step forward Renault has made with interior design and quality. This is a cabin that stands comparison with the best in class.

But it’s not perfect. The steering column-mounted controls are a long way from ergonomic excellence. Rear access could be easier, with only a narrow gap between B-pillar and seat base for getting feet in and out. And, as with so many modern designs, the angle and thickness of the A-pillars hinder vision.

There’s stuff to praise, as well. The driving position is fine, as are the GT-specific Alcantara-trimmed front sports seats. The glovebox is usefully big. And that portrait screen makes car set-up – and Renault does give the picky driver a lot of choices – relatively painless. 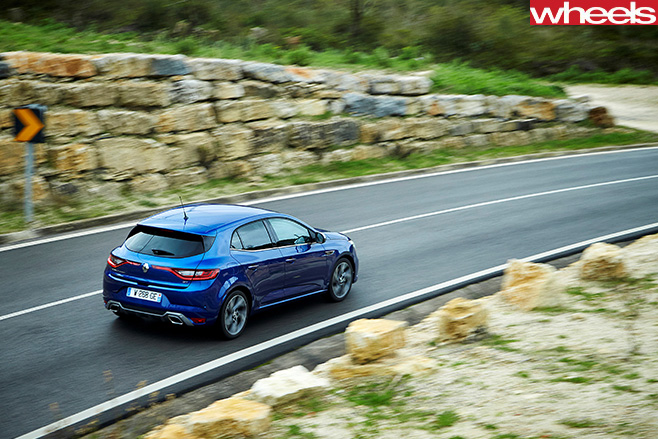 Chief engineer Fabrice Garcia says ride comfort was a priority during development of the new Megane. Even with its stiffer springs, firmer dampers, more rigid anti-roll bars and low-profile 18-inch tyres, the GT is smooth and supple for something sporty. Quiet, too.

It also feels agile, thanks to the direct steering and the 4Control rear axle. In Sport mode, the rear wheels steer counter to the fronts up to 80km/h. In Neutral and Comfort modes the GT makes an earlier switch, at 60km/h, to stability-enhancing same-direction steering.

Sport mode also reduces the level of steering assistance, but does nothing to alter the system’s numbness. Still, the GT is prompt and precise in its responses to inputs. And the car feels well balanced up to the point it pushes gently into understeer.

The engine is sweetly refined, nicely muscular and with a pleasantly raspy top end. But the new-generation Megane isn’t significantly lighter than the old one, meaning the 1.6-litre turbo delivers brisk rather than brilliant performance.

The seven-speed dual-clutch transmission, which Renault labels EDC, does not seem able to read both the driver’s mind and the road ahead the way the DSG in Volkswagen’s Golf GTI can do. It’s okay in Neutral or Comfort, but in Sport – which alters both throttle and transmission mapping – it can be hesitant.

Still, the GT does promise a better basic Megane. The style and space are giant steps in the right direction, as is the emphasis on quality, refinement and comfort. And Renault’s decision to include a full suite of up-to-date active safety tech, including autonomous emergency braking, is a wise one.

With the local launch of the new Megane scheduled for the second half of 2016, Renault Australia is still months away from finalising specification and pricing. What they do know for sure is that the launch line-up will include a 97kW 1.2-litre turbo-petrol four teamed with six-speed manual and seven-speed dual-clutch transmissions, plus an EDC-only 81kW 1.5-litre turbo-diesel four.

Priced right – say from $21,000 for the base petrol manual to around $37,500 for the GT – Renault Australia should find there’s space enough for the new Megane in one of the market’s most crowded segments.