Audi has given the RS3 new clothes and a new heart for 2017 – not to mention a sedan bodystyle for the first time in the nameplate’s history.

AUDI has given the RS3 new clothes and a new heart for 2017 – not to mention a sedan bodystyle for the first time in the nameplate’s history.

WHAT IS IT?
The mid-life update for the Audi RS3, now available in both sedan and hatchback form for the first time ever.

WHY WE’RE TESTING IT
Audi Sport has designed a brand-new five-cylinder engine for its entry-level RennSport model, the RS3, and with more power and more torque surging to all four tyres coupled with significant weight reductions, it promises greater agility and urgency than before.

THE WHEELS VERDICT
The 2017 Audi RS3 takes what was already a capable platform and enhances it by carving off kilos from all the right areas, while simultaneously adding power and torque. It’s a compact rocketship that pays homage to Audi’s rallying roots in the most flattering way, and as a sedan it’s extra desirable. 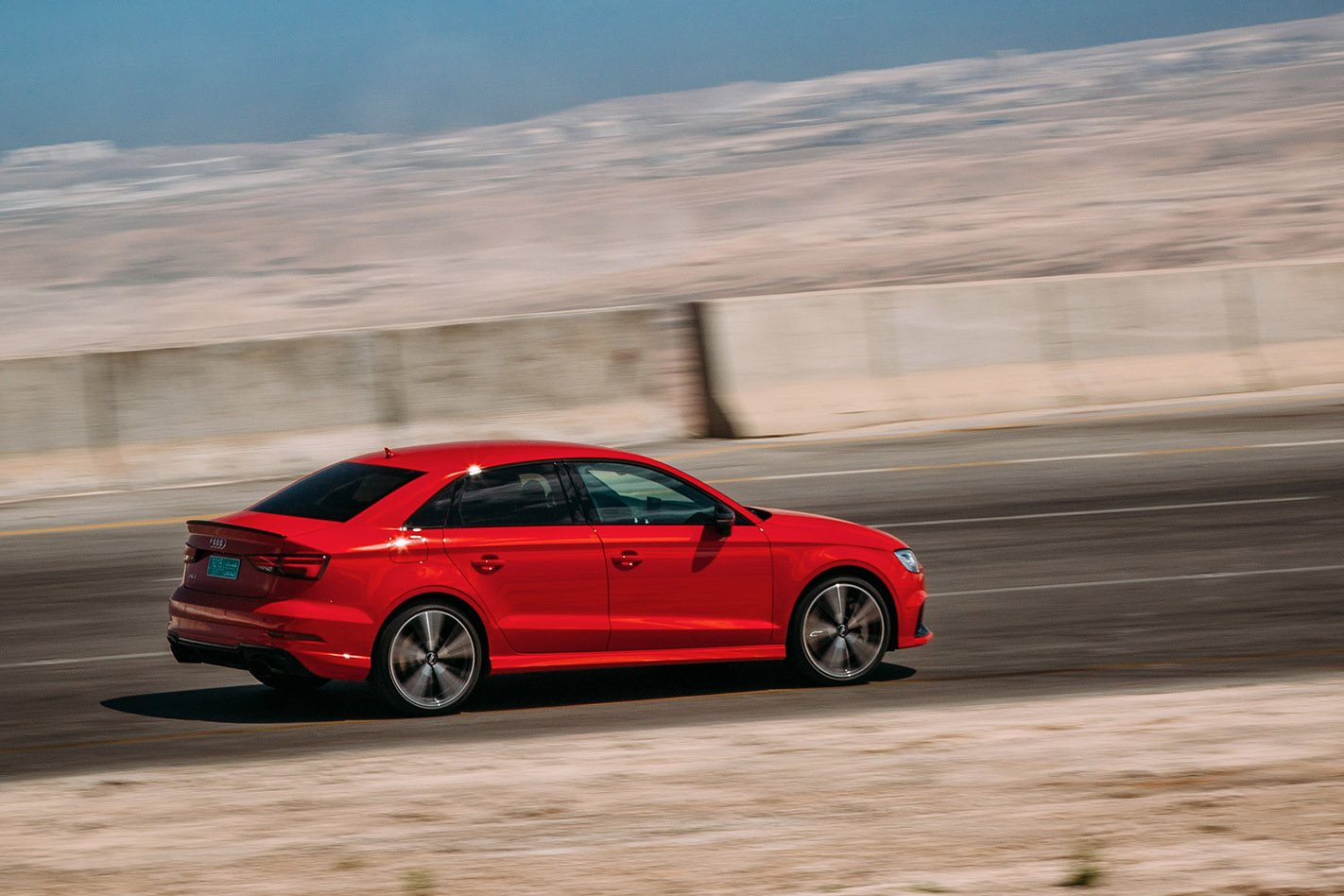 THE WHEELS REVIEW
DON'T be fooled by the 2017 Audi RS3’s new plastics, fresh alloys and extra in-cabin tech – this is no mere mid-life update.

Audi Sport hasn’t just pumped its A3-based entry level model full of botox to keep it looking fresh – it’s given it a heart transplant that sees power and torque figures ascend and kilograms drop. Leaner and meaner, the new RS3 has been reshaped into a more athletic offering.

And there’s a sedan now, too. 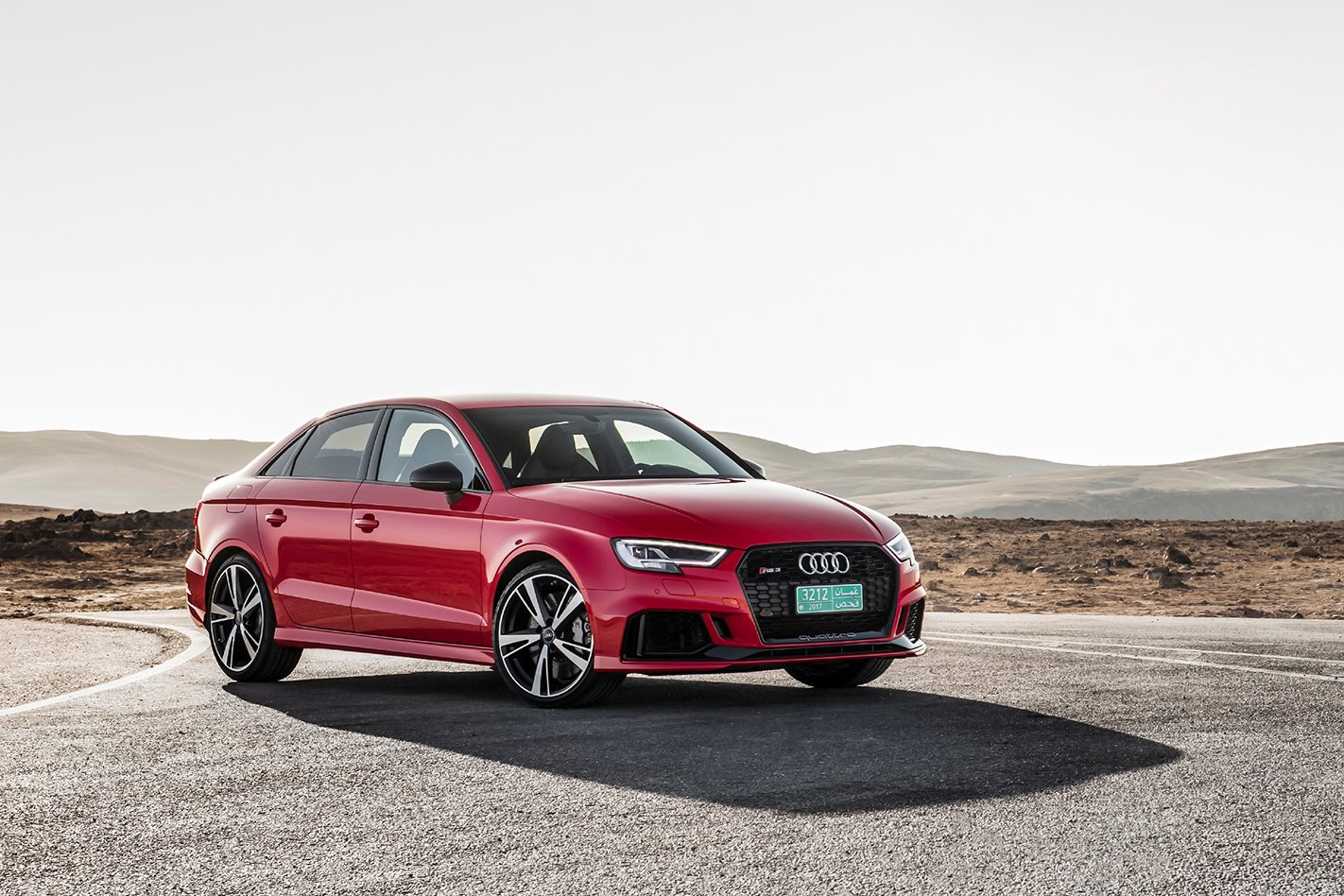 This is great news, as the A3 four-door is tremendously handsome for a transverse-engined sedan.

Up until now Audi Sport has resisted building the RS3 in anything but hatchback flavour, but market demand (and the not inconsiderable competition of the Mercedes-AMG CLA45) has swayed the company in a four-door direction. Our eyeballs are grateful. 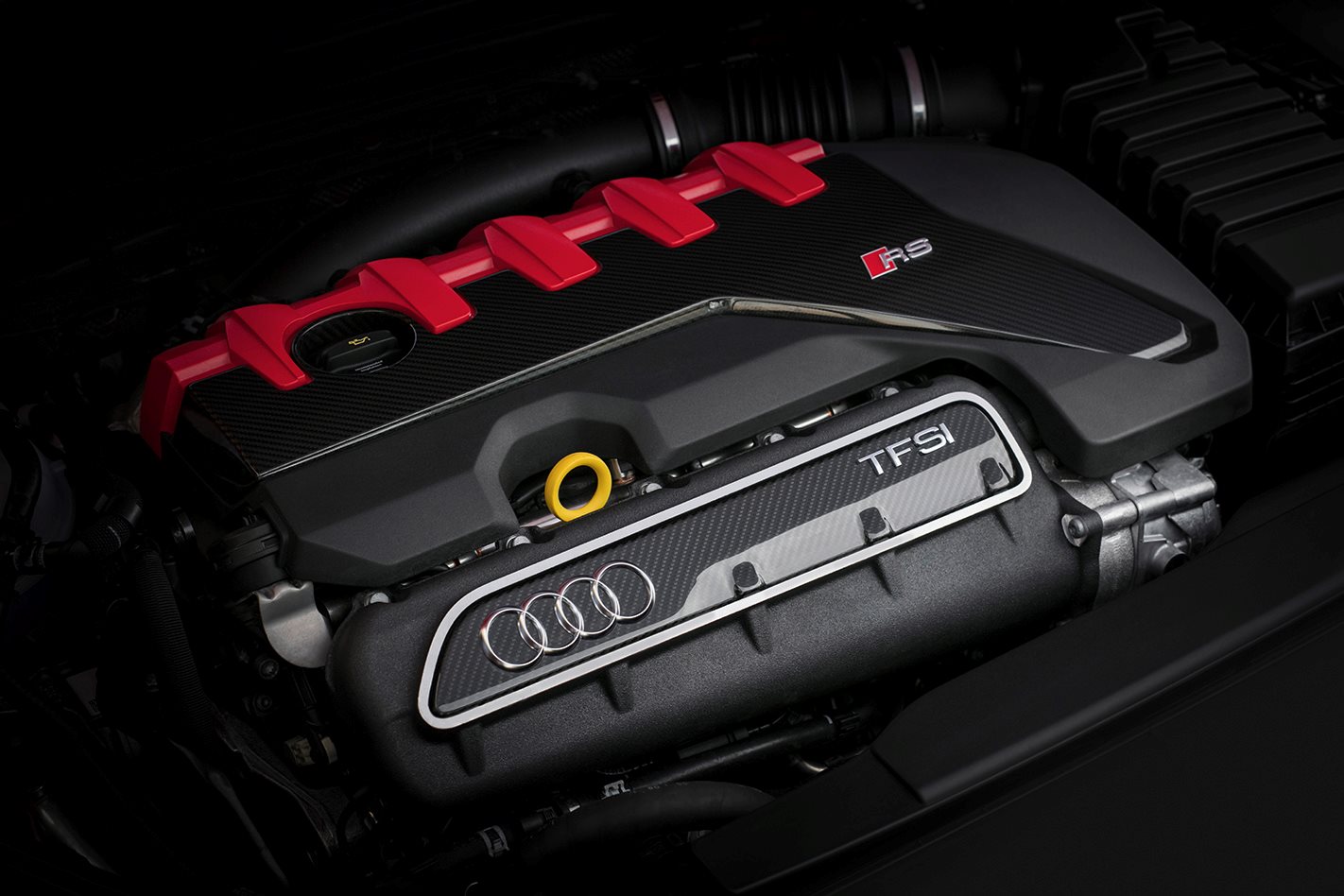 It’s still a 2.5-litre inline five sitting sideways under the bonnet, but this alloy-blocked unit differs substantially from the iron lump of the outgoing RS3. Borrowed wholesale from the TT RS (inlcuding most of the exhaust), the new Audi straight-five weighs 26kg less than before and makes a hefty 294kW and 480Nm.

A lightweight crankshaft, smaller main bearings, dual port/direct fuel injection and a switchable coolant pump are among this motor’s nerdier party tricks, but all you need to know is that the power-to-weight ratio of this powerplant has travelled in a virtuous direction. 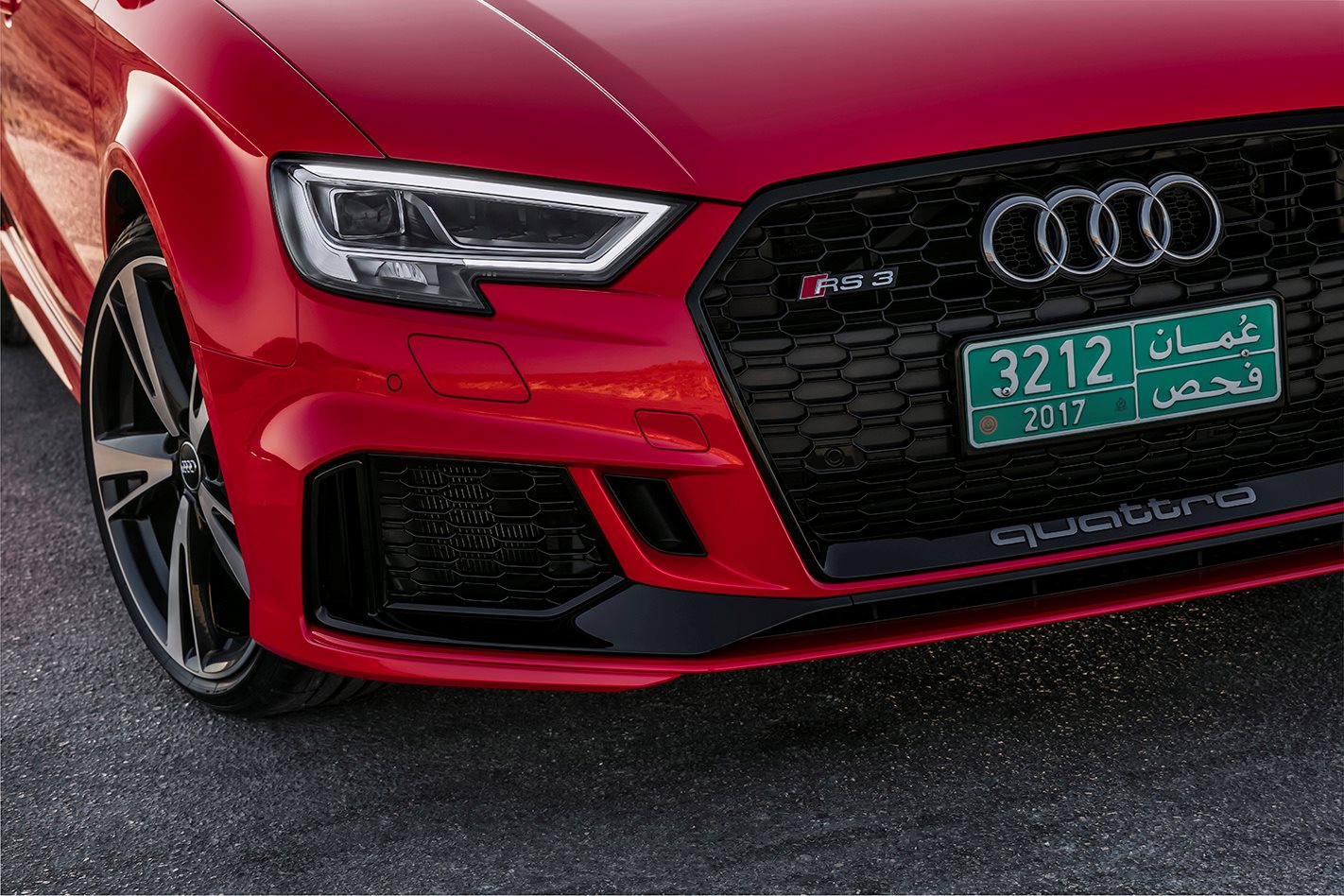 Slicing 26 kilos off the snout of a car should transform the way it handles, and in the RS3’s case that’s absolutely true.

And here, at the 2017 RS3’s international launch on the southern tip of the Arabian Peninsula in Oman, Audi’s RS entry point showcases its newfound dynamic edge well. Oman’s road network offers up countless kilometres of surprisingly smooth tarmac, but it’s dusty and often greasy thanks to arid environs and the poorly maintained Tata trucks that crawl across the Sultanate.

With lower friction than the average Aussie road, Oman offers a good environment to explore the handling of a grunty AWD sports sedan – especially up in the Dhofar hills that overlook the southern coastal city of Salalah. 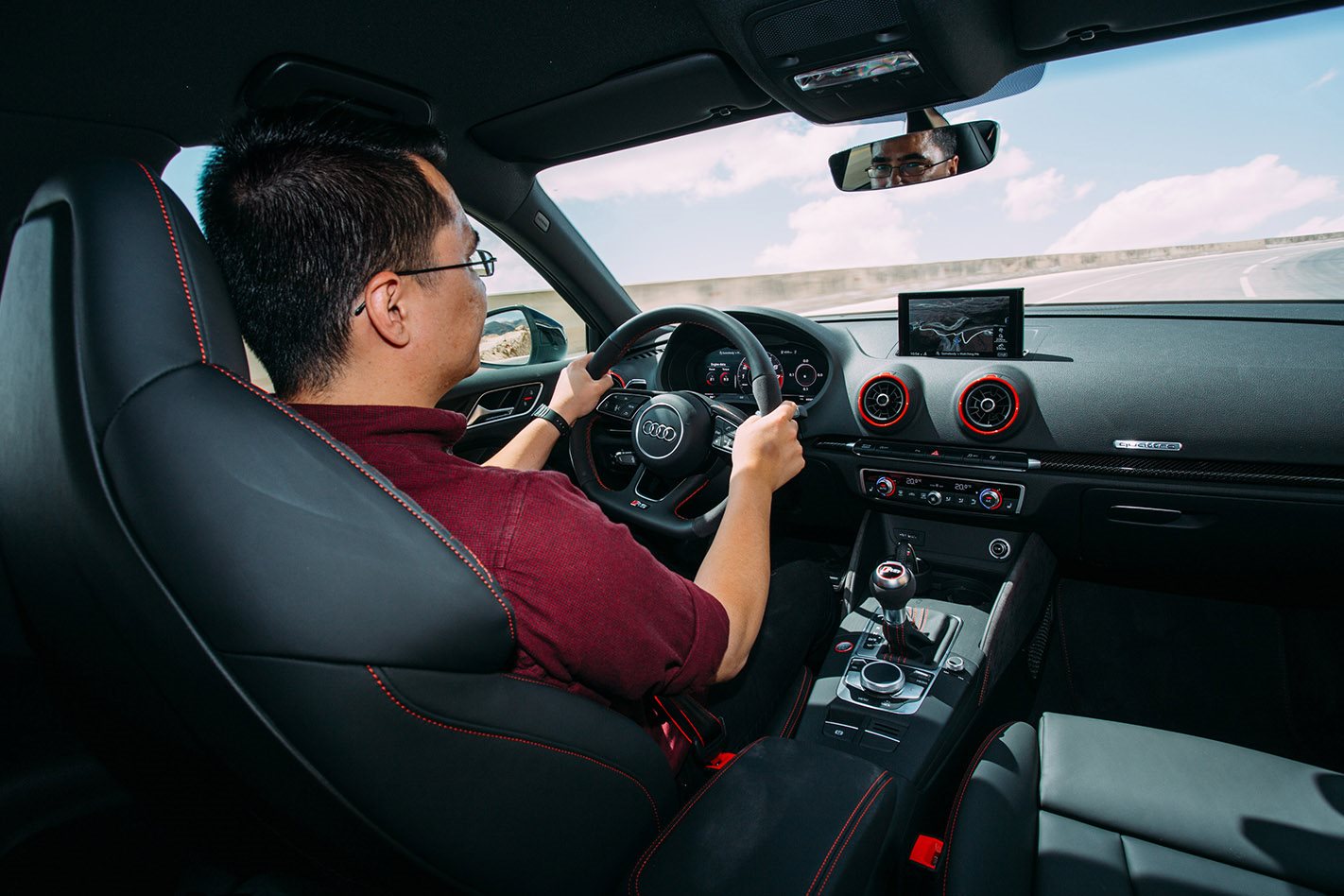 There’s ample grip from the quattro AWD gubbins. The default torque split is an even 50:50 front to rear, but if needed it’ll shuffle as much as 100 percent to the back axle.

Brake torque vectoring also helps out with maintaining composure when cornering under power and the RS3 feels unshakeable as a result. Much like the old car did. 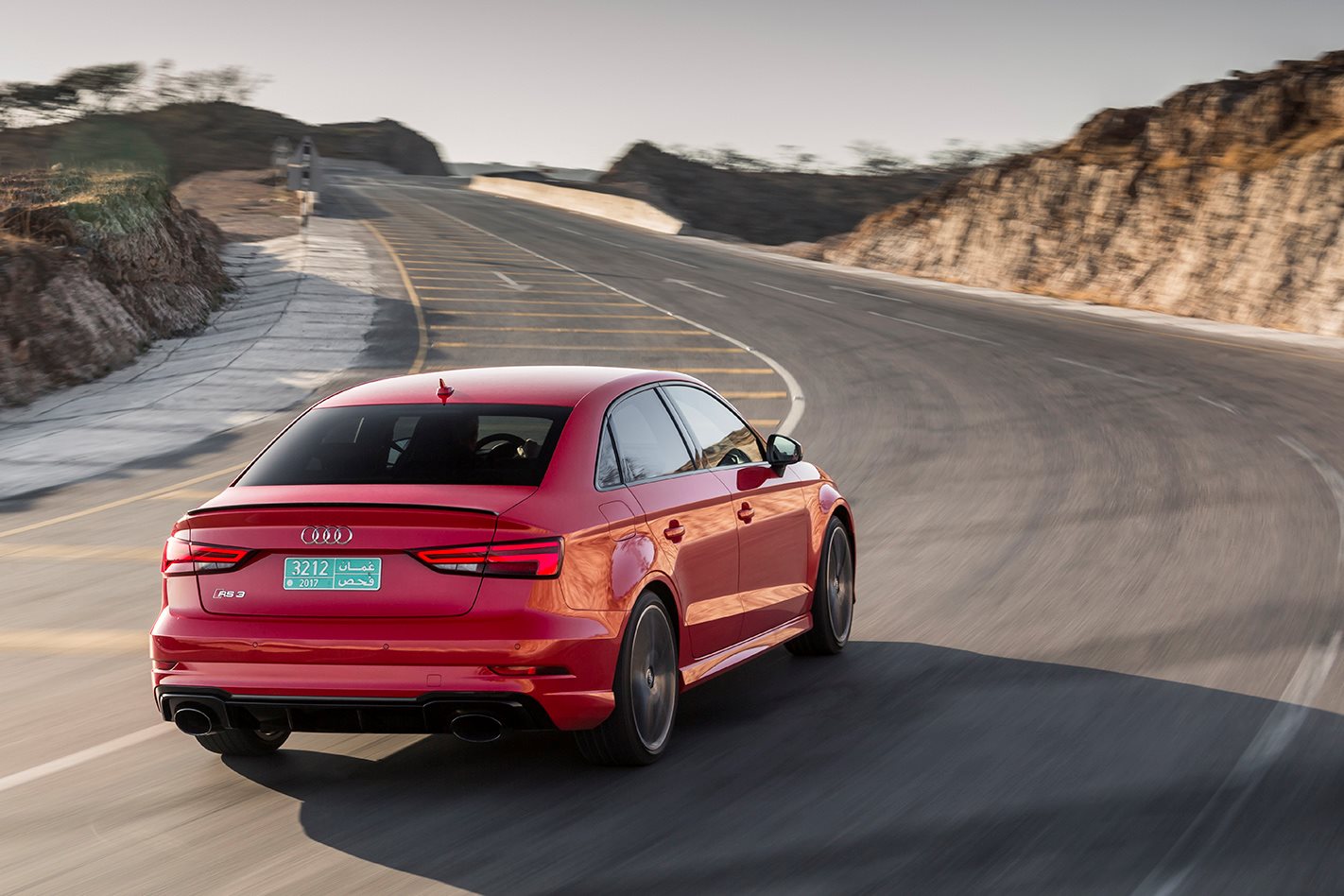 And though the engine design is thoroughly modern the turbine doesn’t start to spool strongly until the tacho is past 2000rpm, and you have to wait until 2600rpm before the boost gauge is truly maxxed out.

It may have displacement on its side, but in terms of turbo lag this 2.5-litre doesn’t feel a whole lot more responsive than the boosted 2.0-litre that powers Benz’s CLA45. 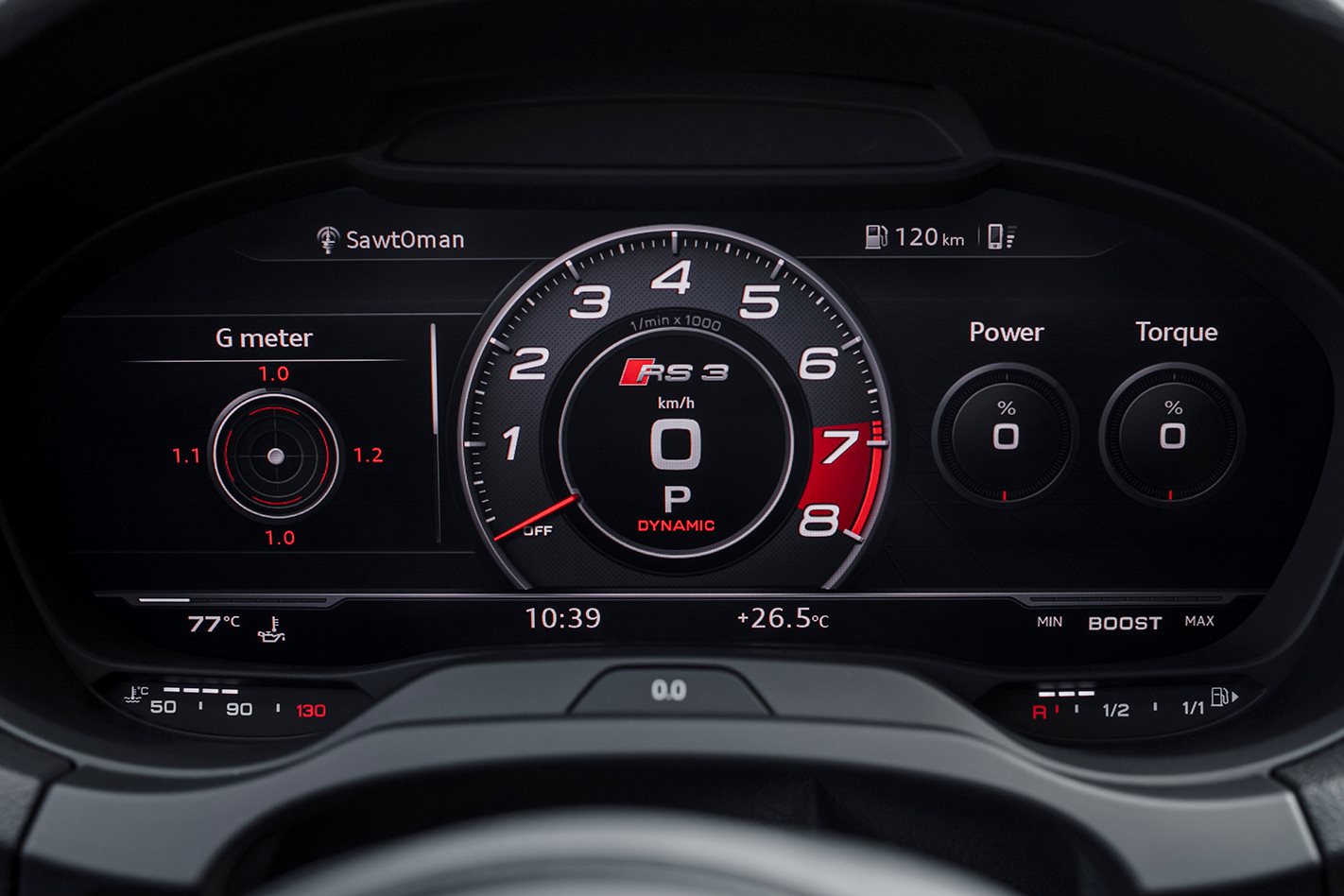 However, it’s on the descent down the Dhofar mountains where we discover a new, entertaining facet of the RS3’s dynamics. A long string of downhill switchbacks hasten the drop in altitude, and the tight hairpins are a playground for drift fiends.

Thumb the ESC button to relax the electro-nannies, aggressively steer into the corner and the tail will come right out in a smooth, predictable, and ultra-satisfying arc of oversteer.

Once sideways, the angle of attack can be adjusted with the throttle. Anyone who says AWD cars lack handling nous needs to drive this RS3 – it’s good. 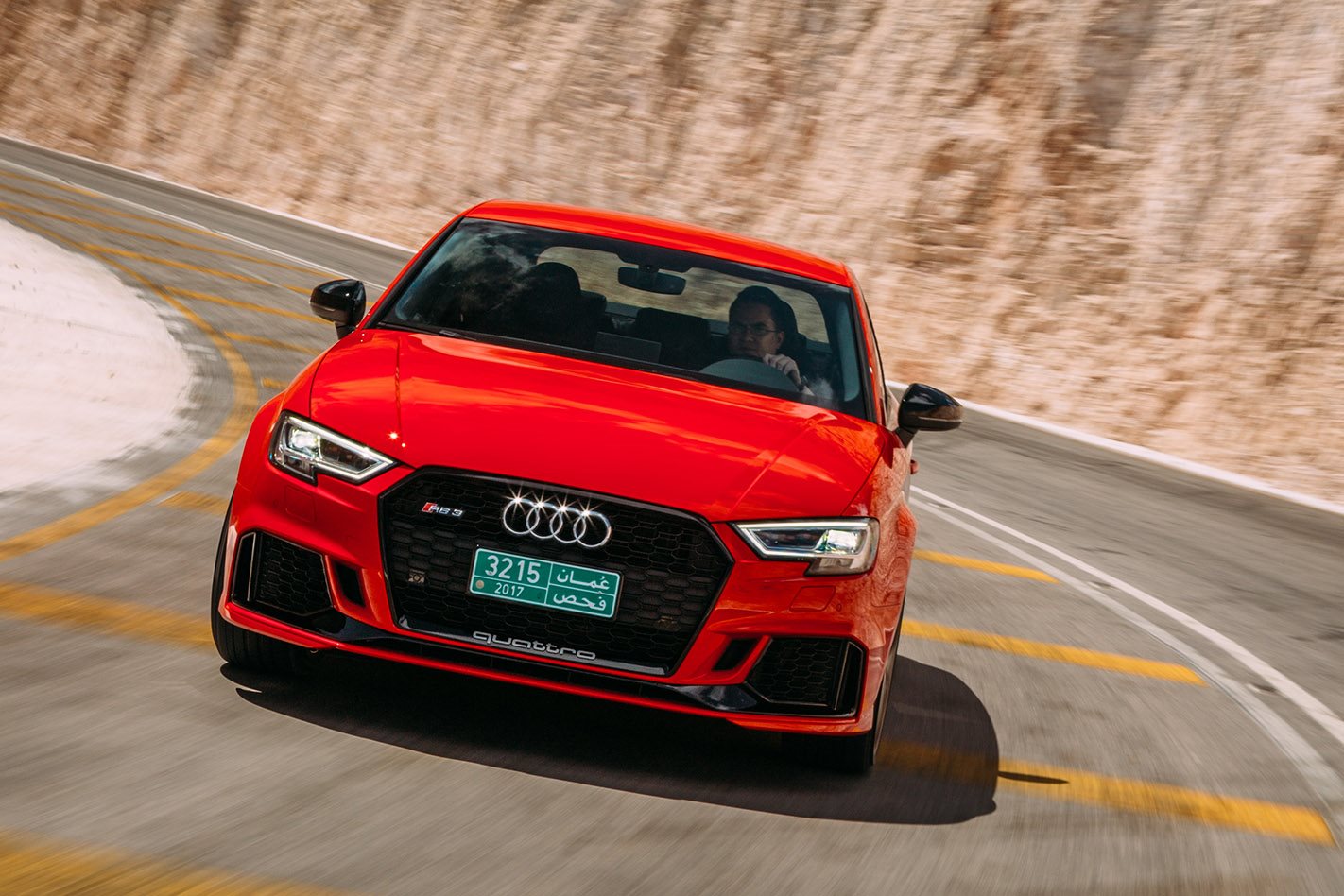 But then again, of course it feels more alert at the front end - Audi has stacked the deck by equipping most of the launch cars with optional carbon-ceramic brakes and wider front rubber - the former taking 12 kilos off the front axle, and the latter adding 20mm more width to each front tyre’s contact patch.

It’s simple physics: less weight plus more grip at the front equals faster direction changes and a looser rear end. Equipped as such, chassis balance is – dare we say it – fairly neutral.

Is it cheating? Not really. All it means is you should probably aspire to spec your own RS3 similarly, but with the carbon brakes expected to be a $10-15K option we’ll forgive you if you don’t tick that box. The chubby rubber is worth your coin, though. 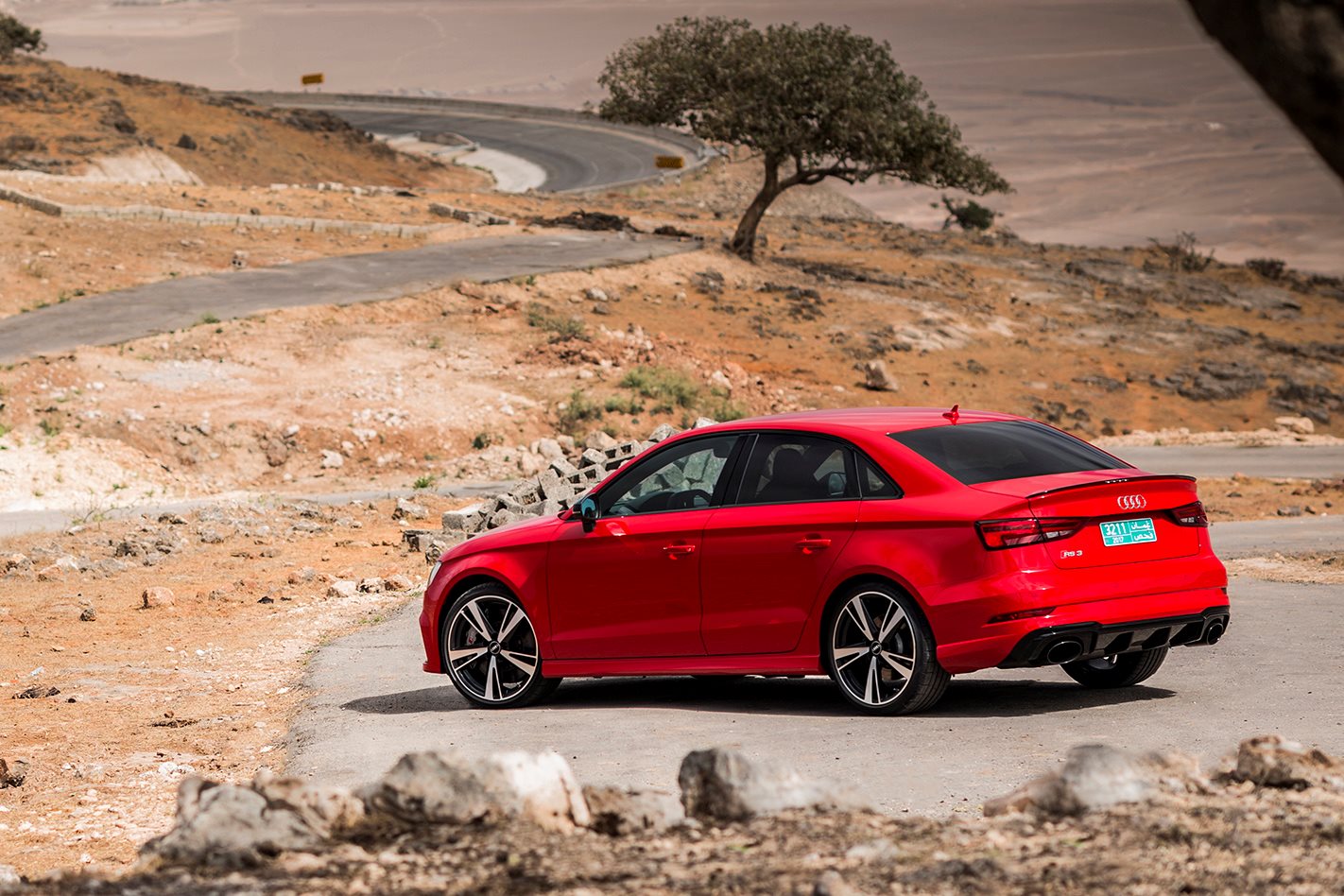 It’s hard to assess ride comfort on Oman’s glass-smooth roads, but the standard suspension and 19-inch alloys didn’t jar us too much. That said, if you want a cushier experience there’s always the optional adaptive damper package.

Thankfully, despite the myriad mechanical changes the character of the RS3 remains largely intact, with its appealing combo of all-paw traction and a grunty five-cylinder being retained. However it’s the details – less weight and more neutral handling – that transform it from good to great. Like we said, this is not your average mid-life facelift... 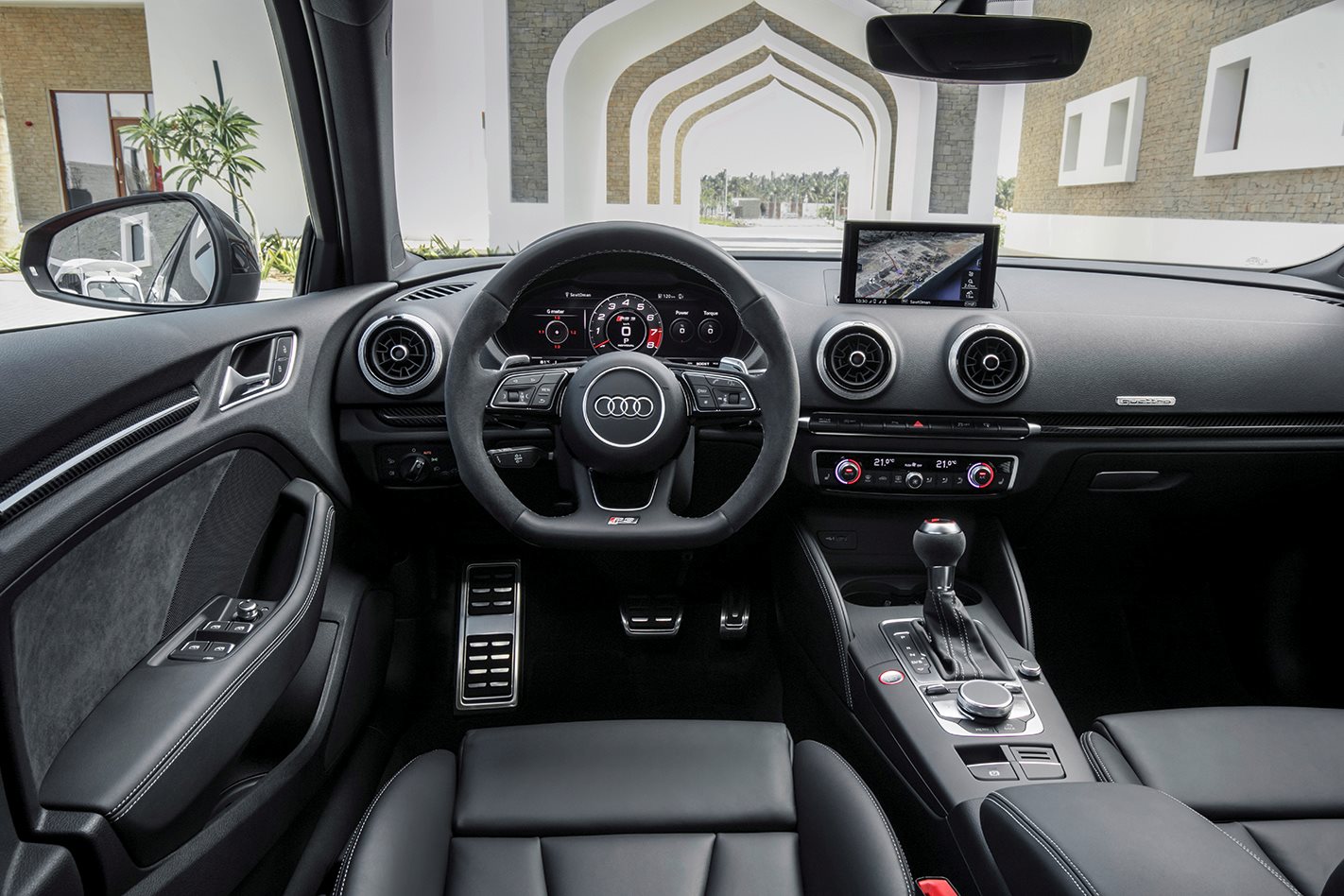 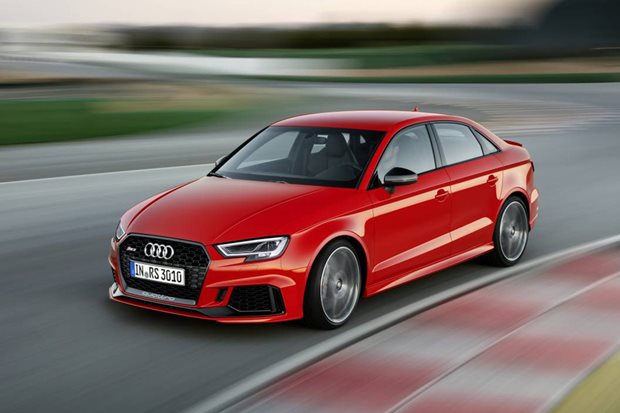 The balance of the car and not the horsepower is the most important things, says Audi Sport boss. 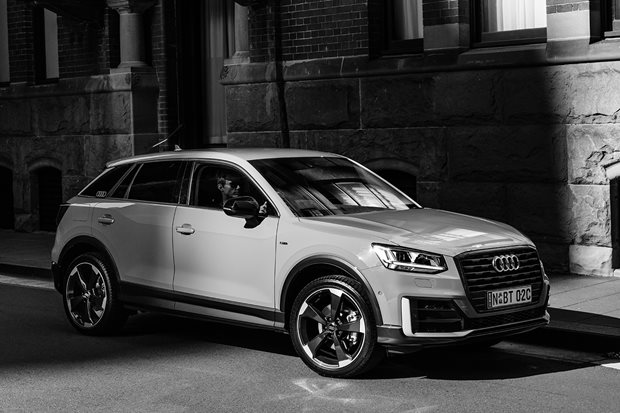