WHAT IS IT?
Maserati’s first SUV, and the car the company hopes will practically double its global sales volumes as it chases 75,000 sales a year. Australia, as with all right-hand drive markets, will be getting only the diesel version, while other places will also have a choice from two turbocharged V6 petrols.

WHY WE’RE TESTING IT?
To establish whether Maserati and SUV are concepts that can live happily together. Many other manufacturers have moved into this part of the market in recent years, but the idea of a Maserati off-roader still feels odd considering the company’s distinguished history of sports cars and sports saloons. The big ask is whether it can deliver a Maserati-appropriate driving experience, especially with the sole powerplant option in Australia being a V6 diesel. 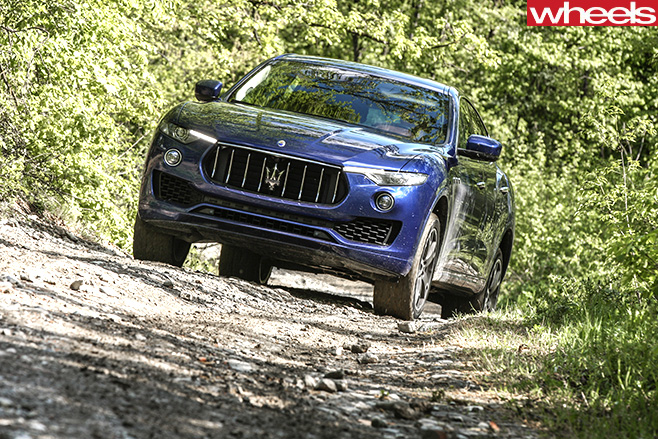 THE WHEELS VERDICT
THE Maserati Levante is a confident move into a new segment for Maserati, and one that looks set to pretty much double the brand’s total global sales off its own bat. It’s dynamically rewarding, comfortable, well-built, refined and – if it matters – even moderately talented off-road. Our only significant disappointment is the failure to offer any of its more exciting powerplants in Australia, something we hope that time will fix.

THE WHEELS REVIEW
IF YOU’RE a physicist who has just cracked time travel, hold off on the predictable ideas for a first spin in your new time machine. 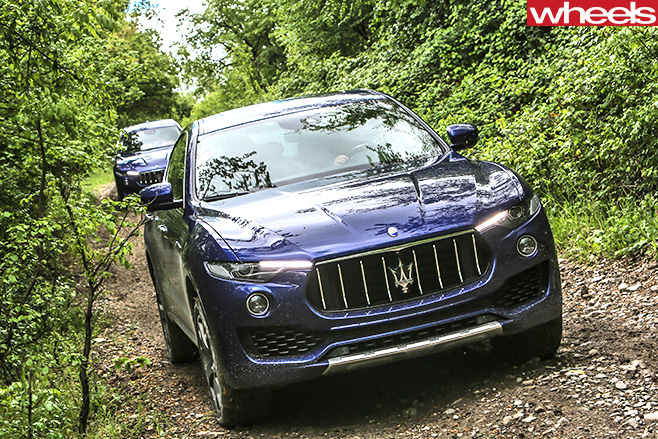 Don’t head backwards to a betting shop, or dial up the future to see how many grandkids you end up with. Instead, consider the amusement to be had from dispatching the new Levante 20 years into the past and then driving it to a meeting of the Maserati faithful, revealing that the future of the brand would turn out to be a diesel-powered SUV.

Of course, the response might not be spluttering indignation: the brand’s tifosi would likely be delighted to learn Maserati had made it into the 21st century. Two decades ago the company was struggling to push global sales into four figures. These days it’s aiming at 75,000 sales – a strategy for which that the new Levante is the critical component. It’s no exaggeration to say the Levante is one of the most important cars the brand has launched.

The company deserves full credit for resisting the obvious shortcut. Or more precisely, for fighting its imposition from on high. Maserati’s place in the Fiat-Chrysler alliance meant building its SUV on a bastardized Jeep platform would make most sense from a cost point of view. Indeed the Kubang concept of 2011 was essentially a rebodied Grand Cherokee which, we were told at the time, was set to be built in Michigan. 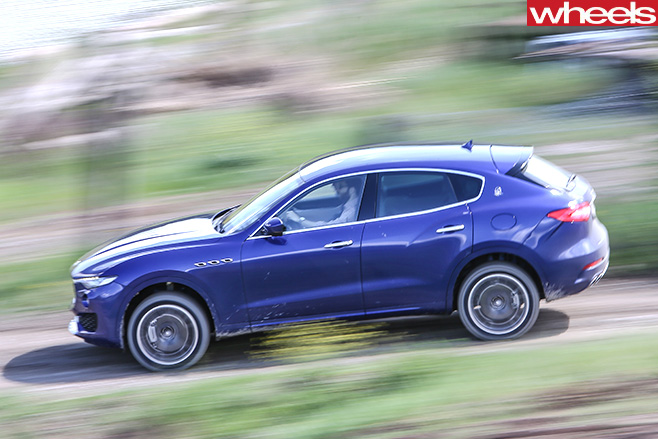 Mercifully, that didn’t happen, with the production Levante being spun from the same architecture as the Ghibli and Quattroporte. It will be made in Turin, and powered by developed versions of the same turbocharged V6 engine used elsewhere in the range.

Leading to the bad news. Only one of these motors is coming to Oz, and it’s not the best one. The plan is that all right-hook Levantes will be fitted with the 202kW VM Motori diesel mill, a decision we can blame squarely on the UK’s insatiable appetite for compression ignition skewing the business case. All versions use a ZF eight-speed autobox and send drive to all four corners, but via an all-wheel drive system that is predominantly rear-biased, with 90 percent of torque heading aft under regular use. Air suspension is also standard, which turns out to be an important advantage on a launch route in northern Italy consisting almost entirely of roads that seem to have been built by the lowest bidder’s second cousin.

Styling follows Maserati’s tradition of being distinctive rather than unambiguously handsome, although to my eyes the Levante looked far better in the soft sunlight of Emilia-Romagna than it did on Maser’s stand at the Geneva show, well-managed proportions doing a good job of disguising its five-metre length. The interior feels predictably similar to that of the Ghibli, with pretty much every non-transparent surface in the fully laden car we drove covered in either leather or carbonfibre trim. There’s plenty of space for both front and rear seat passengers, and a long-but-shallow loadspace at the back. 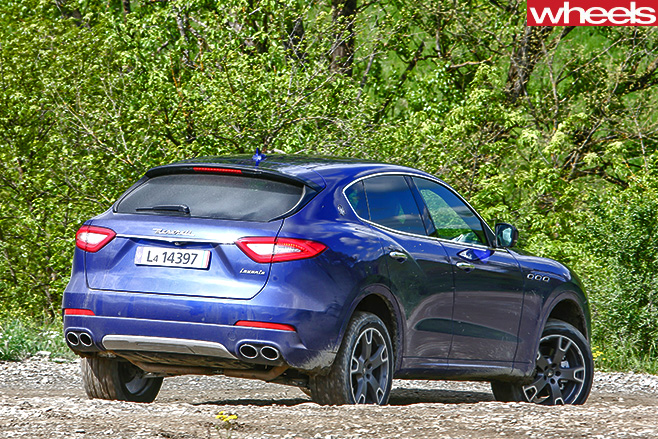 The diesel engine performs adequately, although without the ability to deliver any kind of adrenaline spike. There’s solid urge from low revs and a muted-but-muscular induction burble when it starts to work harder. Acceleration tailed off markedly during attempts at higher-speed progress on the Italian Autostrada, but at velocities well above any but the most incautious would attempt in Oz. The eight-speed autobox shifts cleanly and – along with the throttle response – sharpens its reactions in the more aggressive Sport mode, which also gives the switchable dampers a noticeably firmer edge.

The chassis is the starring feature, with the decision to offer standard air springs responsible in large part for its remarkable combination of talents. Body control is outstanding, the Levante staying composed over the sorts of roads that feel like they should be tackled by a car wearing a full sumpguard and a co-driver shouting instructions. Yet it’s smooth and impressively quiet when asked to cope with high-speed cruising – with ride height automatically lowering by up to 35mm at speed. Manually selecting off-road mode pumps up the springs to lift the body by up to 40mm, and although owners are likely to have scant inclination to test Maserati’s claims of 250mm maximum body clearance over anything sharp, the car did a good job driving up and down some steeply graded gravel tracks on its road-spec P-Zero tyres. 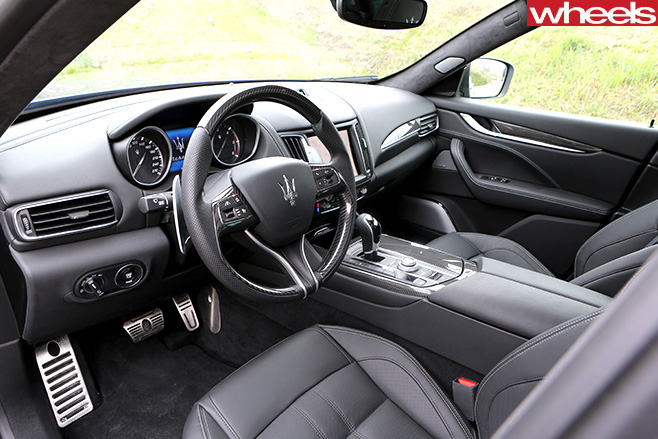 Under hard cornering there’s still body roll, the effect exacerbated by the high seating position, but grip levels are high and there’s very impressively little understeer as the clever all-wheel drive system does its thing while trying to send as much power rearwards as possible. The Sport dynamic mode slackens off the stability control slightly, but adhesion levels are high enough to mean there’s little sense of slip or movement in the chassis, even under high lateral loadings.

The steering deserves praise as well – the Levante will be one of the last new cars to be launched with hydraulic rather than electrical assistance – giving excellent feel and weighting.

Pricing hasn’t been confirmed, but the steer from Maserati Australia is that we’ll be looking at around $150,000 when the Levante goes on sale here at the end of the year, meaning a supplement over its obvious rivals. The exclusivity of the Maserati badge should help to bridge some of that. The Australian importer is already battling for an increased allocation – and for a non-diesel powerplant option as well.