That said, Nissan is making up for lost time by bringing us the biggest, baddest Nismo-branded car there is; the GT-R Nismo, complete with GT3 customer race-car boost-tech and a price-tag with more compression (probably chest compressions when you hear what the number is).

Forget that it’s been available in the US, Europe and Japan since MY14…it’s here now and that’s what matters. 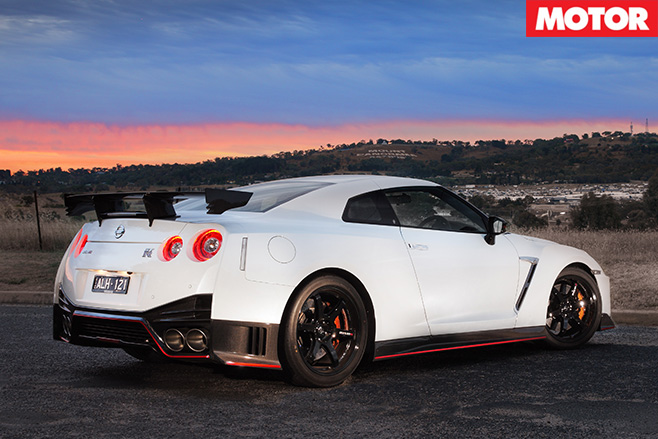 In Nismo form, the GT-R, already a supercar by any standards, is launched into the performance stratosphere. Godzilla has grown an extra bollock.

That starts under the bonnet where the standard 3.8-litre V6’s turbochargers have been replaced by larger units with the same part-number as those on the GT3 competition car we saw running in the Bathurst 12-hour and other global race events. 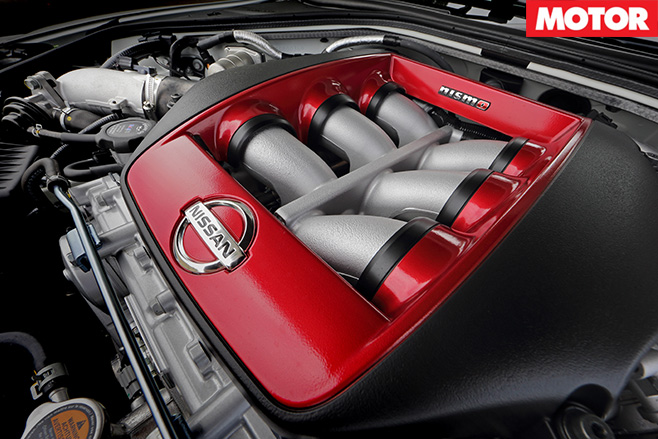 Preventing all that torque from turning the GT-R inside-out is a revised bodyshell that uses a bonding process as well as the standard car’s spot-welds. And it needs it because the spring-rate of the Nismo version is somewhere between 2.5 and three times the stocker’s already tightly-wound coils.

Downforce is the body’s other big job, and to see to that, the Nismo gets a bunch of carbon-fibre doo-dads including a widened front bumper, tapered rear bumper, side skirts and a monster rear wing.

The detail stuff is pretty intriguing, too. There are carbon-fibre brake ducts, 20 x 10-inch front wheels with knurling inside the bead are to stop the tyre turning on the rims, forged alloys which contribute to an overall 2.9kg weight reduction and carbon Recaros. 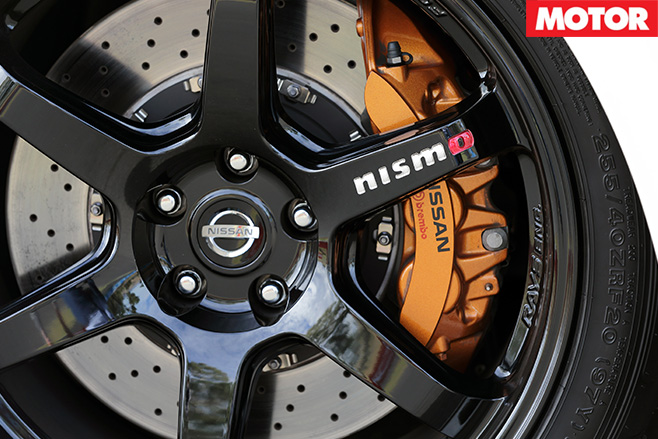 You also score plenty of alcantara trim and the number of buttons has been reduced across the MY17 range, but it still looks a bit like a high-end pinball machine. But here’s the sting in the tail: while the GT-R has always been touted as a supercar with a working-class price-tag ($189,000 in its most affordable, Premium guise) the Nismo will rush you $299,000.

Now, given that the original GT-R was never really applauded for its ride quality, upping the spring rate by something like 300 per cent should make it more or less undriveable.

True, even in Comfort, you will – on typical back-roads – spend a fair bit of time with your tail above your head and there still doesn’t seem to be a whole lot of difference between the boulevard and track suspension settings. 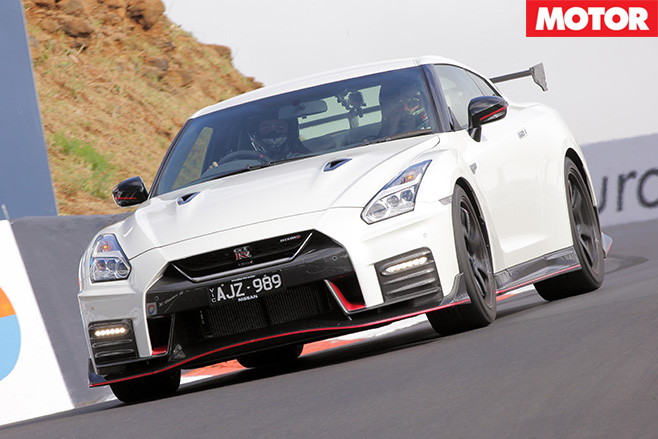 But while it can get lively, what saves it is a beautiful set of dampers. Okay, they’re conventional in that they use traditional damper technology, but these things are so obviously tuned for this, and only this, application, that the end result actually gets away with it. To an extent…

That other GT-R bogey – a clunky, truculent gearbox – still contributes the odd thunk and clang, mainly when changing down. But to be honest, it’s so in keeping with the track-inspired feel of the thing, I think I actually quite like this level of unashamed mechanical-ness. Rolls Royce is unlikely to copy it, but you get the idea… 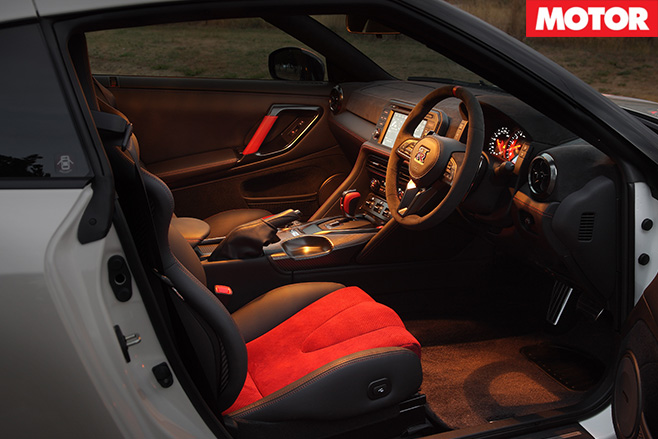 Here is a car where the steering angle is entirely down to where you point it, and not a function of how far over it’s leaning at the time. As a result, when it rotates, it REALLY rotates. You are left in no doubt whatsoever as to whether you’ve got her turned in or not.

Actually, it almost feels bit fidgety as if there’s not much transition between apexed and not-yet-apexed, but all that grip saves the day. At which point, you’re back on the noise and trying to anticipate the next bumpy stretch.

Ah yes, that grunt. Not too many road-going cars can boast 600 horsepower, so the yardstick required to truly understand that is not one that everybody will be able to locate at the time. But trust me when I say that it honestly feels like every one of those neddies is present and accounted for and champing at the goddam bit. 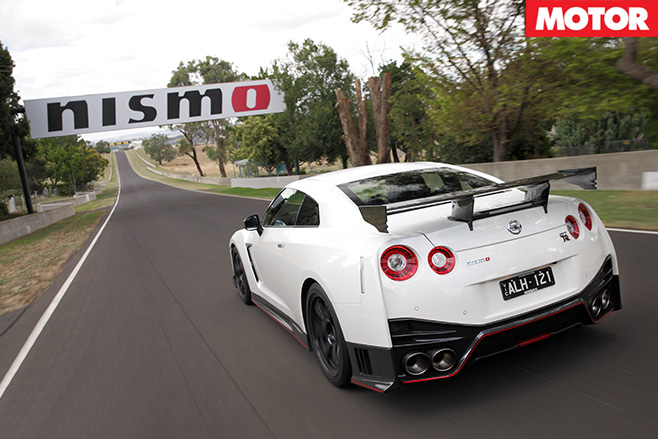 The torque is pretty phenomenal, too, and the push in the back just doesn’t quit, even when the orange shift light hands over to the more insistent red one and you feed it another cog. Without lifting, of course. D’uh!

And like all good, really, truly fast cars, 200 is just another mark on the speedo. It means nothing, and the GT-R will surge past it while ever you’re game to keep pouring on the coals. And it’ll do it even up a steep hill like Mountain Straight at Bathurst.

How do I know? Because for reasons known only to its corporate head-shrinkers, Nissan took advantage of a Mount Panorama circuit, still in race trim after the 12-Hour, to let us loose. 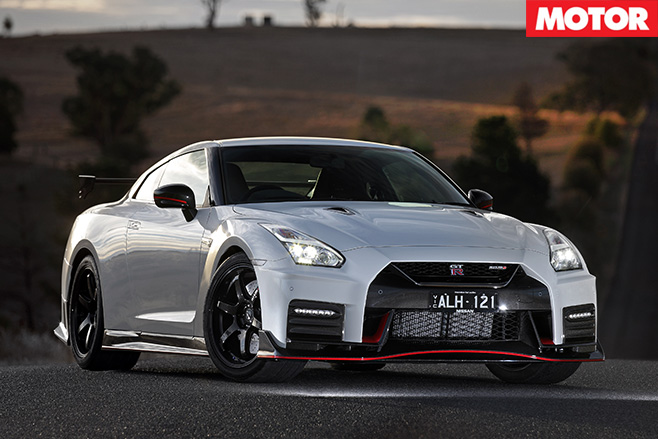 If I told you that I took that Nismo by the tail and taught it the meaning of respect in the first 6.2km of hallowed hotmix, you’d be right for calling me out as a shitter of bulls. In fact, even with the affable Cody Crocker in the death seat, it took me a few laps to get to the point where I was even linking the corners up.

But even at those speeds, it was obvious the GT-R Nismo is dead-set up for it. A more track-ready car you will struggle to find in new-car showrooms. And even when Cody and I swapped chairs and the pace and level of commitment kind of doubled (that’s how it looked through the windscreen, anyway)  old Godzilla just got on with it.

Actually, I should have made Crocker write this bit (no point just one of us being outside our comfort zone).

LIKES: There’s track-ready and then there’s this.