IT’S easy to think of the Alpina B3 Biturbo Touring as the M3 wagon that BMW never made. Easy, but wrong. The 301kW load lugger instead offers a softer-edged take on going quickly, with the reassuring exclusivity that comes with every Alpina product. You’ll pay for the privilege though…

WHAT IS IT?
Alpina has been fettling BMW products for more than half a century, and it’s reasonable to expect the company has become pretty competent at bringing its own look and feel to Munich’s wares. The B3 Biturbo Touring is the fast BMW wagon you’d probably build on a fantasy configurator, brought to life in Buchloe.

WHY WE'RE TESTING IT
Having recently spent some seat time in Audi’s RS4 Avant and Mercedes-AMG’s C63 wagon, we were curious to see whether Alpina could bring something new and worthwhile to this fearsomely competitive sector.

THE WHEELS VERDICT
There’s something delightfully old-school about the Alpina B3 Biturbo Touring. Compared with its key rivals, it feels a bit of a throwback, but in a good way. It feels friendly, analogue and predictable and although it’s tough to make a case for at this price, in this market, it’s not impossible. A trickle of takers is all that Alpina needs to tick over output while retaining exclusivity.

THE WHEELS REVIEW
EASY power. It’s a term we hear a lot of in sport. George Foreman had it in his prime. Tennis star Nick Kyrgios has it in spades, as does AFL’s Dustin Martin and cricketer Chris Gayle. It’s that effortless ability to land a hammer blow without appearing to break sweat and the Alpina B3 Biturbo Touring majors on it. Yes, you can buy wagons that are quicker, but I can’t think of one that makes going quickly so easy. Is that a good thing? That depends on your point of view and the overall appeal of the Alpina certainly depends on a certain left-field standpoint. 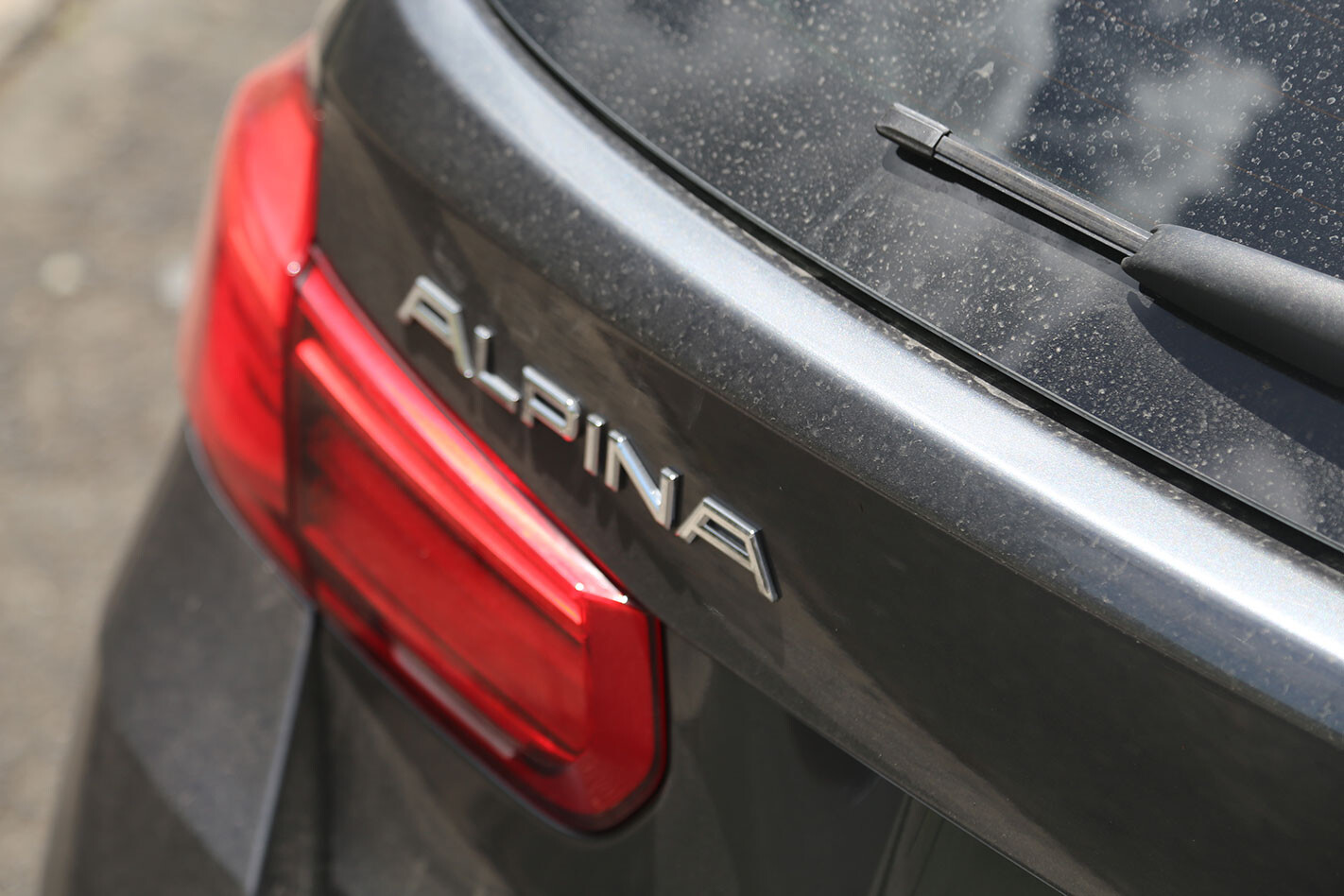 Judged on cold economic realities, it’s hard to stand up the B3 Biturbo Touring. BMW has never built a production-ready M3 Touring, while the 340i Touring is a car that some markets get, but not Australia. We get the 240kW 340i sedan, but the Touring range tops out with the 185kW four-pot 330i. Extrapolating from BMW’s pricing here, were a 340i wagon imported it would carry a price tag of around $96,000. The 301kW Alpina B3 Touring carries a price tag of $167,727. That’s more than the 331kW Audi RS4 Avant. More than the 375kW Mercedes-AMG C63 S wagon, too, which means the car from Buchloe needs to do some serious spruiking of its USPs.

At first, it’s easy to be cynical. The Alpina dress-up kit with stripes, badging and distinctive alloy wheels looks great or gauche (again, standpoint is key), and the interior is all buttery thick leather, build plaques and factory crests of carbs and cranks. The engine is the N55 engine from the 335i, modified with a pair of turbos rather than the single twin-scroll unit it’s usually supplied with. It also gets a specially cast crankcase design that Alpina ships to Munich for installation on the line before the car arrives at Buchloe for final fettling. It’s an open-deck design rather than the closed-deck architecture of BMW’s successor engine, the B58 that’s found in the 340i, so in many ways it’s a bit of a pick’n’mix. A melange it might be, but when teamed with a custom-calibrated ZF eight-speed auto it’s a heck of a combination. 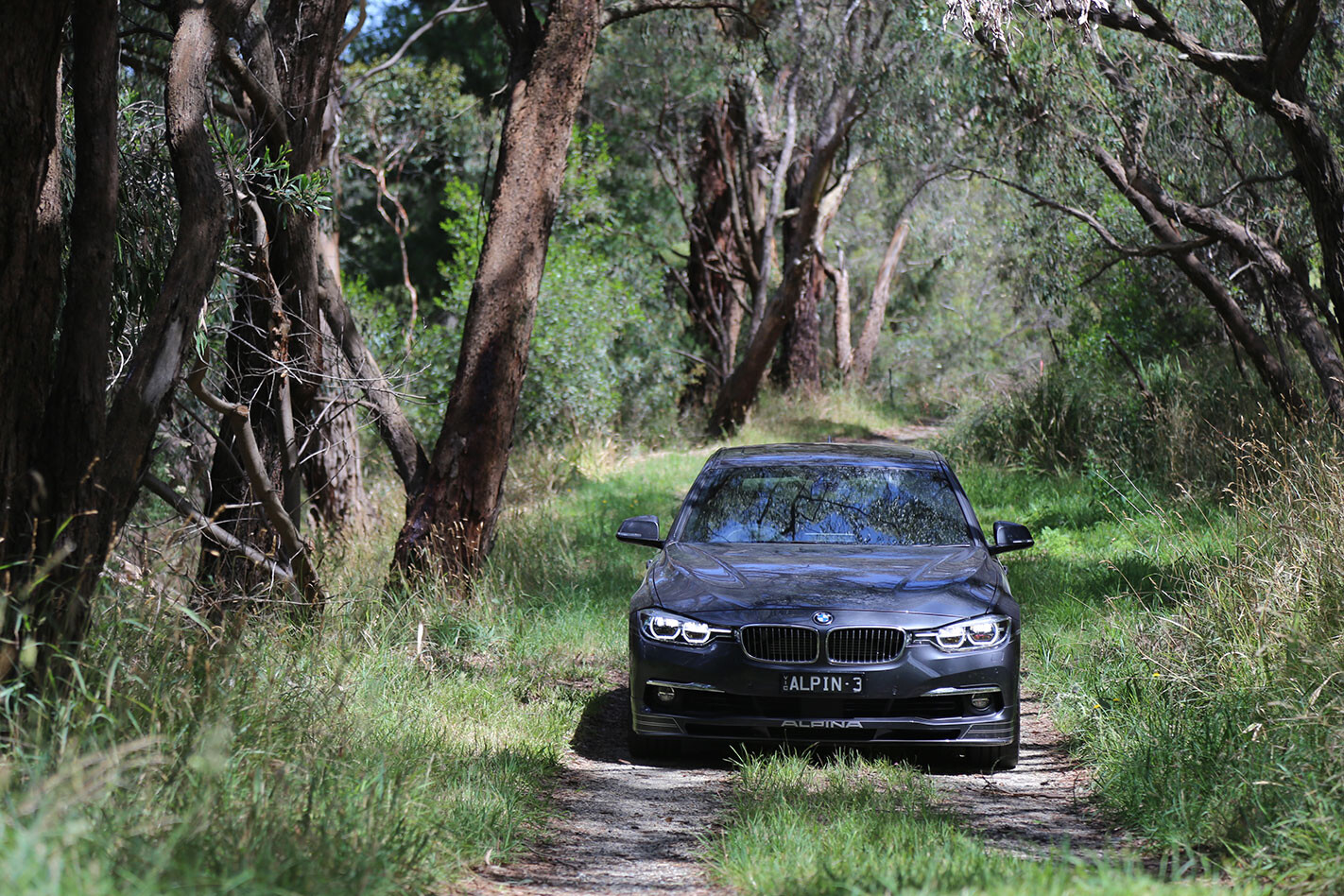 It seems strange saying this about a car that wears a body kit and stripes, but the one word you’d use to describe the B3’s driving characteristics is maturity. The cleverness in this car isn’t overt; Alpina crediting its customers with a deep understanding of what makes a car good to drive. There’s subtlety in the way the drive modes are configured. Many manufacturers will offer an extremely soft or an extremely spiky extreme to their settings, whereas the B3 is driveable on-road even in its most aggressive Sport+ mode. The adaptive dampers effectively have two modes, with Sport+ also freeing off the stability control, but you could enjoy a good road in Comfort, while Sport wouldn’t rattle your fillings in the city, even riding on 20-inch alloys. Likewise the throttle mapping doesn’t engage in cheap tricks to make you think the car is quicker than it is. It doesn’t need to.

The Akrapovic exhaust adds a few pops and bangs on the overrun in the Sport modes to amp up the aural excitement, and from 5000rpm towards the redline there’s a yowling intensity, with the rear always feeling just on the edge of needing some electronics to rein in the 600Nm in the lower gears. Yep, that’s 50Nm more than an M3 or M4 Competition, so you need to really think twice before doing the long press on the stability control button. Get the B3 sliding and you need to be on your game. The chassis is relatively benign and the steering excellent, but plugging into that Goldilocks zone where there’s just enough torque before the big turbo really gets excited requires a sensitive right clog. On a flowing road, keeping the engine around 4000rpm gives the Alpina a sinewy feel, leaping from apex to braking zone with an addictively elastic muscularity. 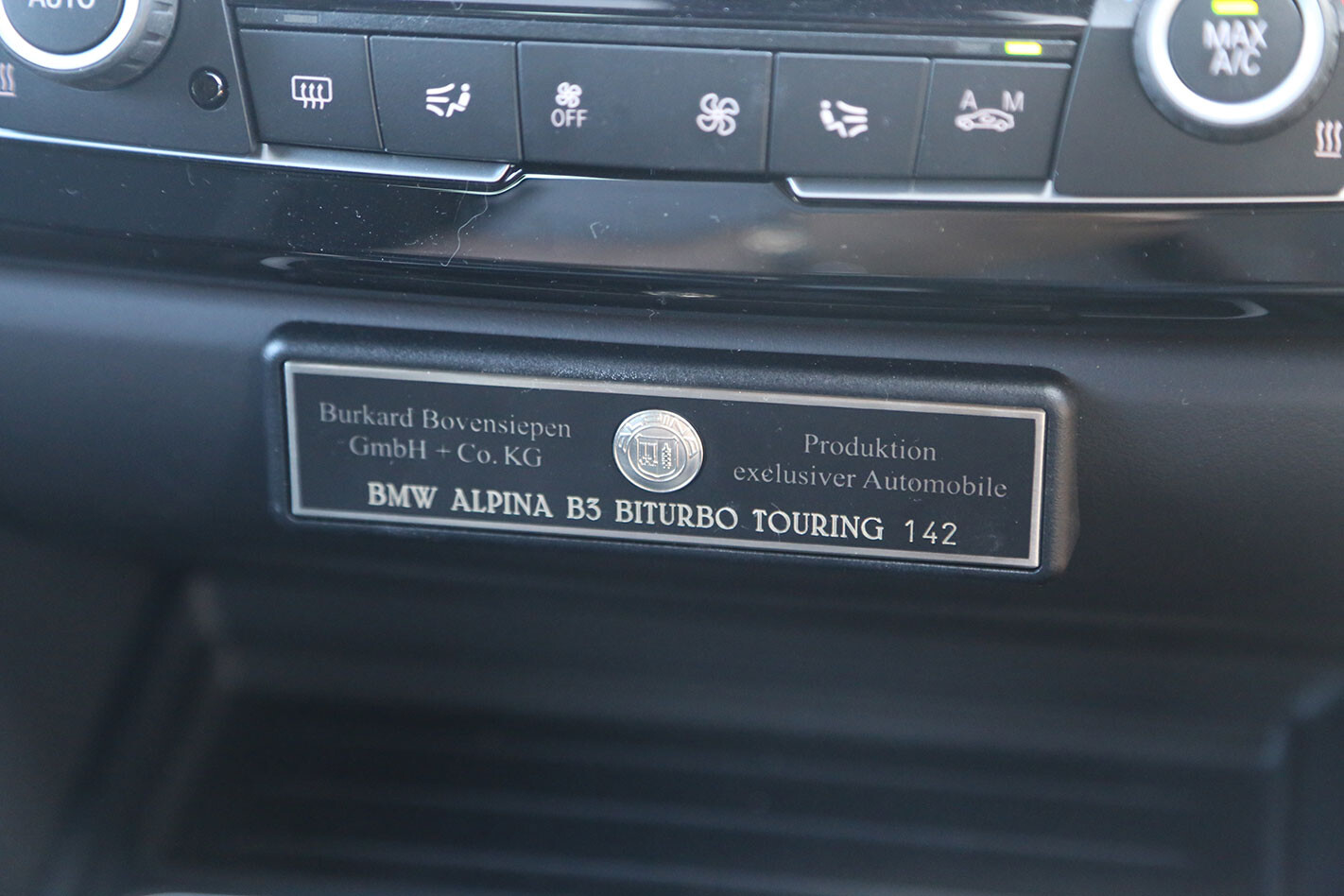 Alpina claims a 0-100 time in the mid-fours but on road, you’ll like the quick-witted traction control that just allows you the faintest squeak of wheelspin as you step smartly off the line. No, it’s not as concussively accelerative as an Audi RS4, but that’s no dishonour. Despite packing a pair of blowers, the engine lacks a little in true subsonic torque, and you’ll need around 2500rpm on the board for the B3 to really pick up its skirts, with peak torque arriving at 3000rpm, in contrast to the RS4’s 1900rpm serving of 600Nm.

The transmission is a sweeter thing at most speeds than the M3’s twin-clutcher, although it does occasionally have the propensity to kick down a bit too sharply when you’re just ambling. The shift buttons on the back of the wheel spokes are a flat-out bad idea. If you’re really jinking through tight corners, you can often find the car running to its redline while you’re fumbling for the dollar-coin sized bumps. Sorry, Alpina, but a set of paddles is just a better execution for shifting on the fly. 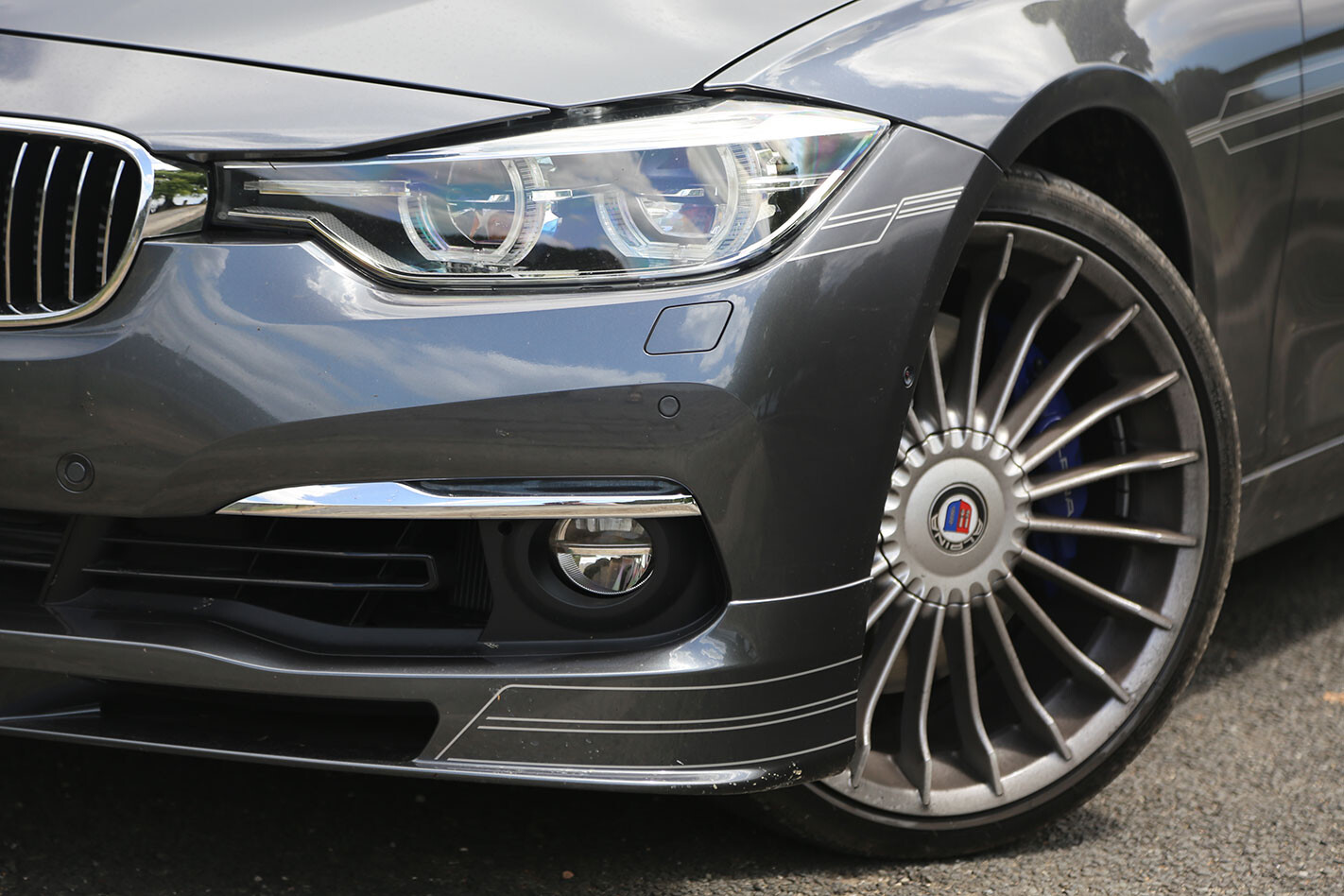 For all of the extra coin, the cabin isn’t a marked departure from normal 3 Series fare. The blue dials, the smart upholstery, the ritzy stitching, the rather ungainly steering wheel and the build plaque differentiate it, but it lacks the theatre of an RS4 or a C63. Maybe that’s the point. One thing that was a common complaint was constant creaking of panels around the B-pillar once on the move, although it has to be said that this was a very well-used demonstrator vehicle.

There are clearly more conspicuous claims on your $167K than the Alpina B3 Biturbo Touring. It’s an easy car to overlook based purely on numbers, but to do so ignores a blend of talents that Buchloe has spent half a century honing. It’s a lovely thing to drive either quickly or slowly, with Alpina’s nuanced understanding of balanced dynamics giving it the sort of polish that feels anything but the ‘tuner car’ that the uninformed will pigeonhole it as. If anything, the B3 feels a more cohesive proposition than any current 3 Series and one that richly rewards the keen driver.

As it stands, there are only two Alpina B3 cars left for sale in Australia but that’s actually no great cause for regret. Winging in at the same $167,727 price point is the new Alpina B3 S, packing 323kW and 660Nm. Based on the updated ‘LCI’ version of the latest 3 Series, the B3S cars get new turbochargers, a revised cooling system, fettled suspension and remapped transmission software.

Mercedes sells more than 4000 AMG models per year in Australia. Alpina? “We’re supply limited,” explains Sales Manager Phil Jeffery. “BMW only allocates Alpina between 1500 and 2000 build slots per year. That’s globally across B3, B4, B5, B6 and B7 lines. If we considered ourselves to be 1 percent of that we’d be extremely fortunate. In real terms, double figures would be good, here in Australia. Twenty sales would be excellent.”

If the B3S still seems a bit too pedestrian for your tastes, the next-gen Alpina B5 is due to launch in February/March. Arriving at much the same time as the new M5, the B5 is the product of BMW and Alpina working hand-in-hand with the new G30 Five Series platform. With all-wheel drive, 447kW/800Nm, and 0-100km/h time of 3.5 seconds, the B5 Biturbo Touring will also run on to a top speed of 330km/h, making it the world’s fastest wagon.