Hyundai's i30 N is here. And we can gladly confirm Namyang’s new weapon won't be overlooked on price or performance.

With more than 200kW packed into its nose and a chassis developed by former BMW M boss Albert Biermann on the Nurburgring, it's always been promising. 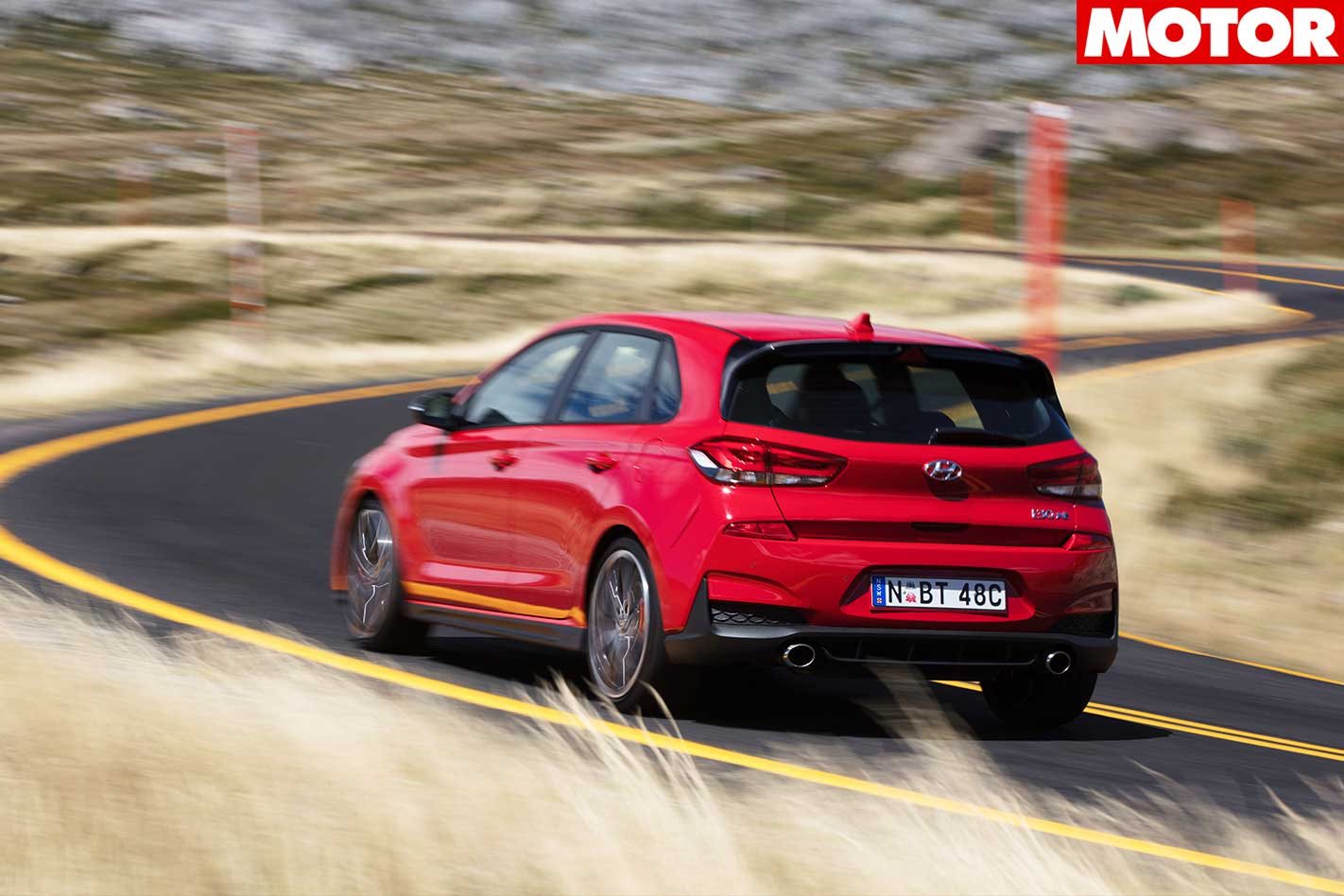 Yet, after enchanting us with its balanced and assertive performance in Europe, we reserved judgement on the front-driver’s abilities until we tackled Australia’s unique roads in anger.

Luckily, Hyundai Australia devised an epic drive program for its local launch out of Albury to leave no doubt about its debut performance car.

The 500km drive shoots down through Granya Rd, then Omeo highway, to Falls Creek. Then loops back through Mount Beauty and Tawonga Gap Rd. 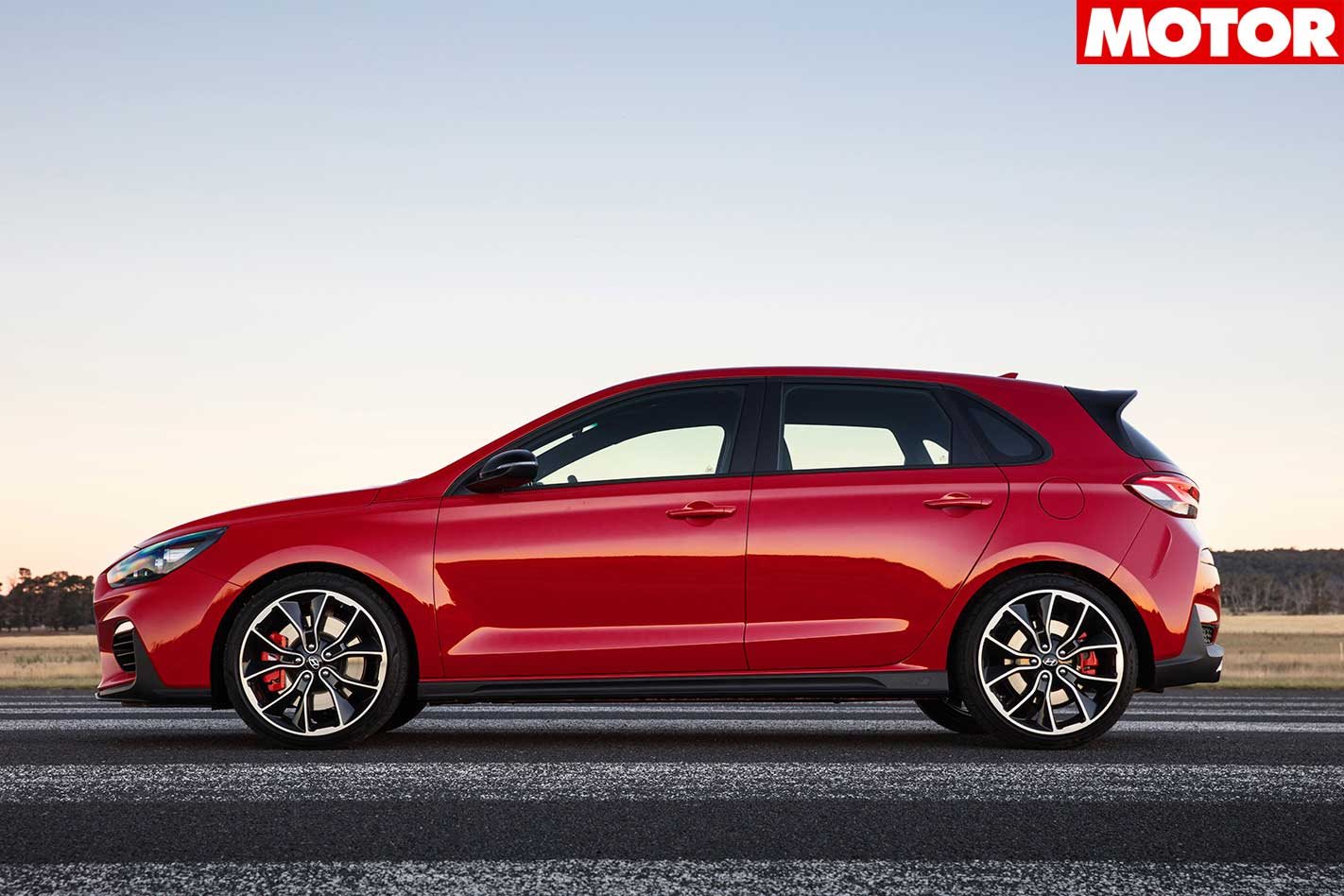 After, a full day’s thrashing at Winton Raceway will prove whether a newly announced racetrack-friendly warranty and parts program is merely talk.

Hyundai’s set the i30 N at $39,990 before on-roads to give the fledgeling performance brand its best chance in our cut-throat hot hatch market.

It’s also copied the higher-grade Performance Pack i30 N in Europe, where it’s sold in two guises, for its single full-fat specification variant. 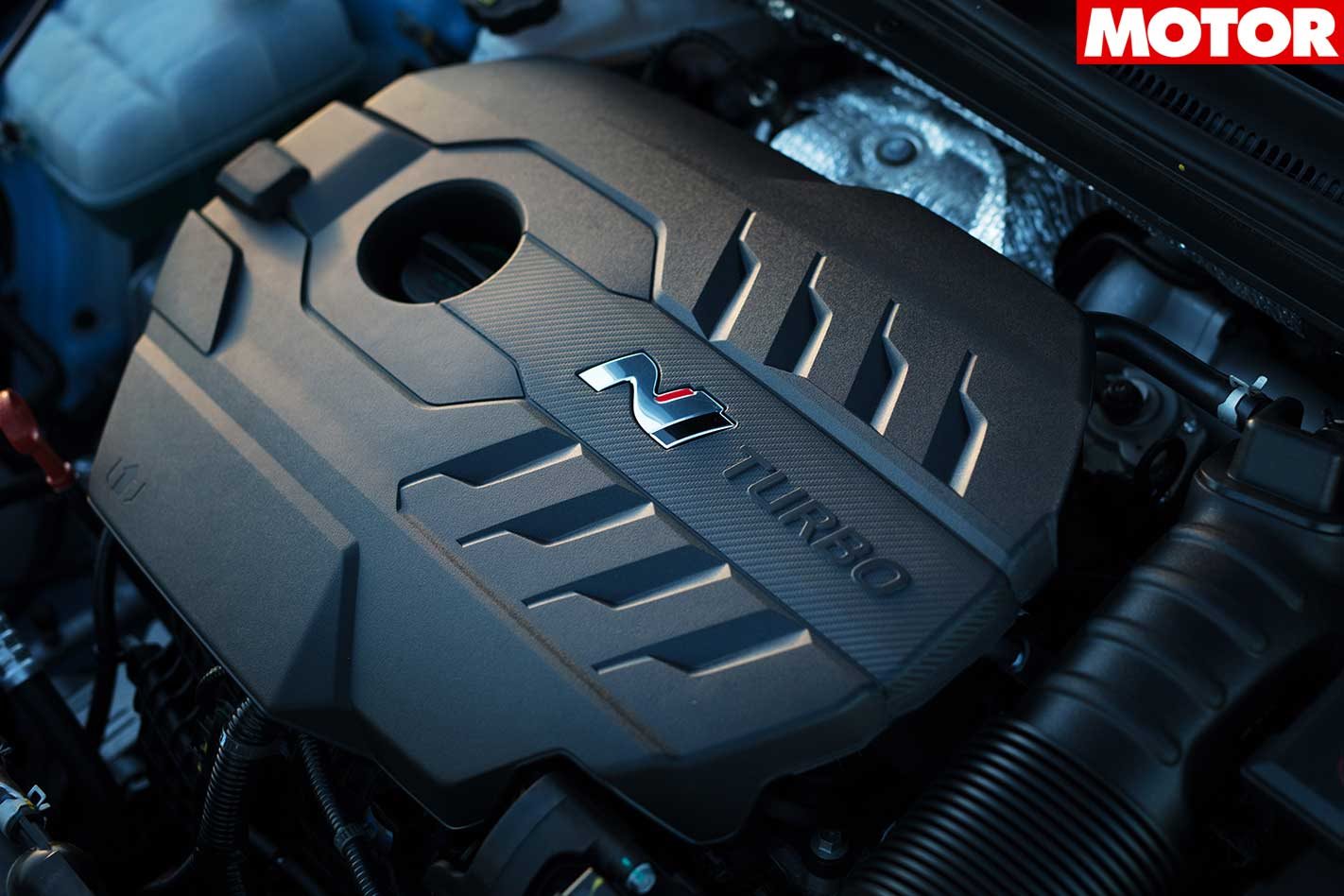 To secure that rock-bottom price with as many fast bits as possible the standard equipment list had to shed a few items. Front parking sensors, power front-seats in leather, and a push-button start can only be had in an optional $3K Luxury Pack.

That said the standard car’s interior hardly feels spartan. Inside there are alloy pedals, decent cloth seats, an eight-inch sat-nav with Apple Carplay, and a leather steering wheel. And it all feels put together in a solid, European way. 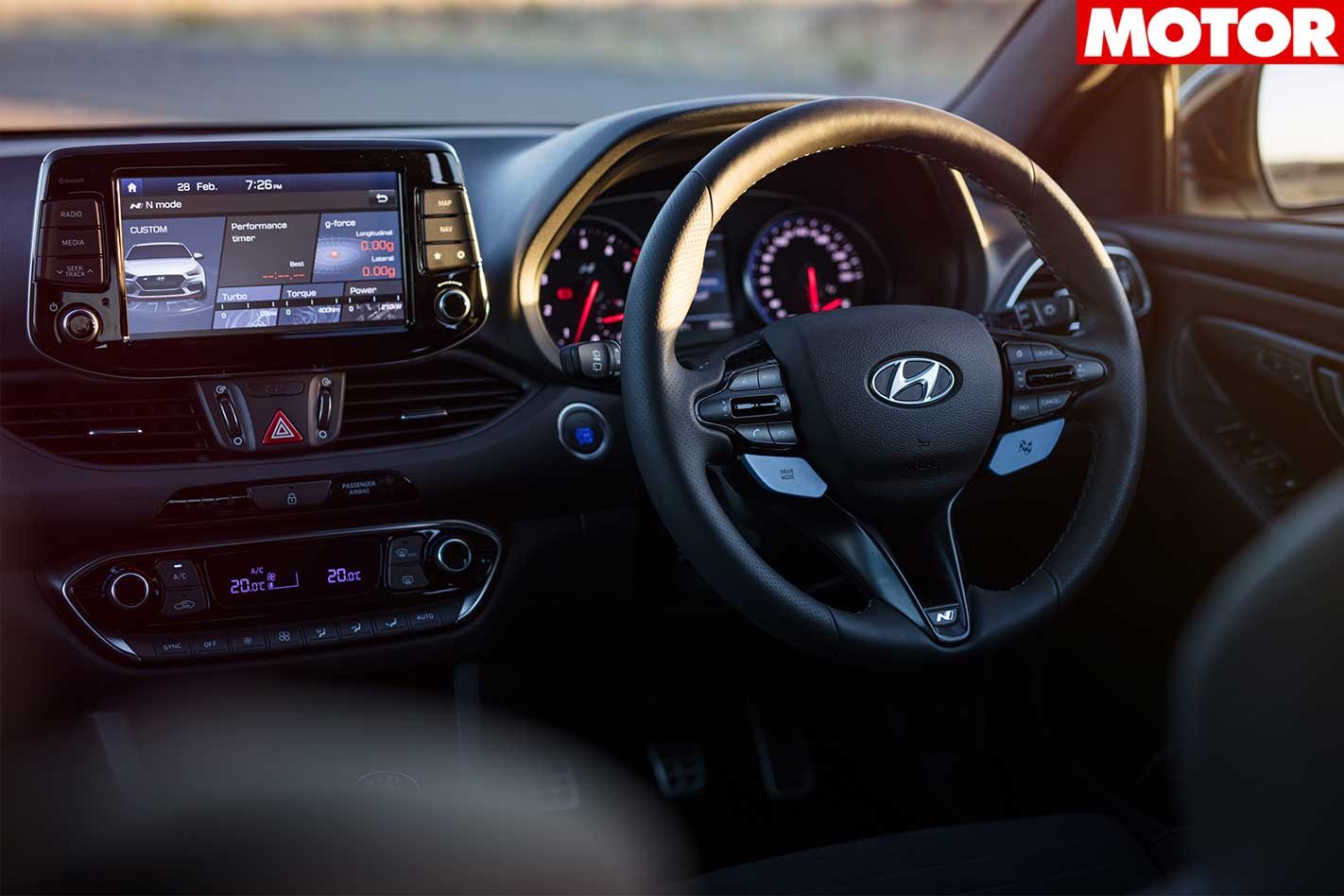 That robustness comes at a price, though. The car’s 1429kg kerb weight in standard form can quickly balloon to 1509kg after ticking a few options. Combating this is a 2.0-litre turbo inline-four from the brand’s Sonata sedan.

A fair bit of work’s been done on the engine to reap more reliability and higher outputs. It’s turbo and cooling systems have been completely redesigned. There are new pistons, and an overboost system, for 202kW and 378Nm.

As a result, the transmission’s been reinforced with a beefier clutch, carbon synchros, and a new six-speed gear set. It has launch control, albeit with a three-minute wait between launches, and a zingy rev-matching system. 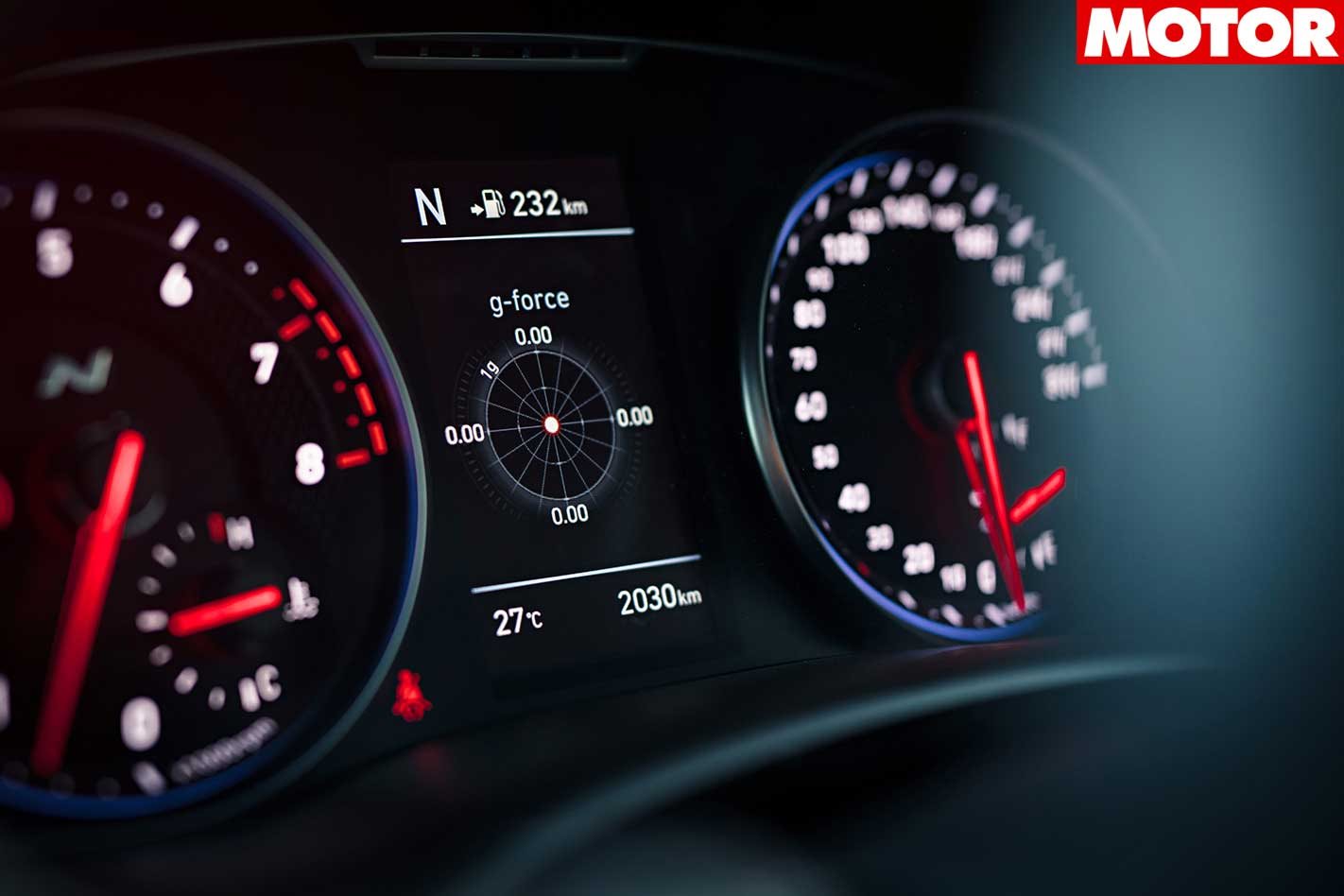 Rowing the hamburger-shaped knob is a treat. The clutch operates with a smooth, linear stroke, even if it bites a little vaguely, and each gate arrives with a meaty clunk.

Feathering the throttle conjures a gruff sound in normal mode and something more growly in sport plus. And while its note lacks some personality under throttle, it redeems itself on the overrun with pops and bangs loud enough to wake the dead.

There’s a mic in the intake tract that sounds like it plumbs spool noises through the firewall. The N’s real party piece, though, is its customisable N drive mode menu, where you can set different bits (steering, diff, ESP, suspension, rev matching) in varied states of aggressiveness. 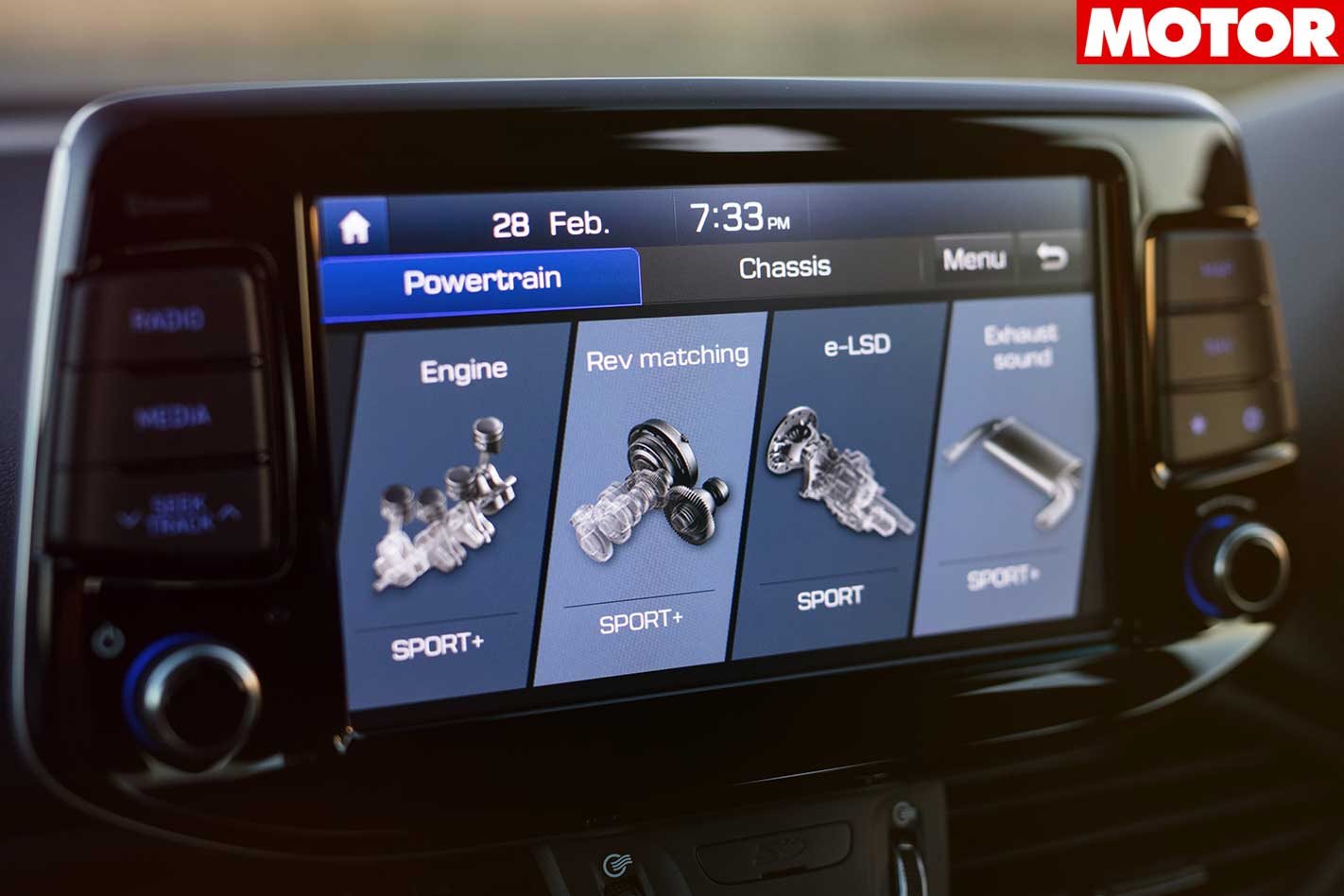 Throttle response is good in sport-plus mode, even if the turbocharger needs a second to reach full boost. Sink the throttle from low revs and the thrust swells at 2500rpm before really flexing its muscles at 3500rpm. The surge lasts until 5500rpm before tapering off.

Hyundai claims it’ll hit 100km/h in 6.2 seconds. We didn’t get the chance to test that with launch control, but the N hustles with decent pace. In-gear acceleration is strong, with gear ratios putting the Theta engine in its torque-rich midrange for easy overtaking.

There’s no peaky top-end rush, which is welcome on the tight left- and right-handers that define the run down to Falls Creek via Omeo highway. The i30 N tips in with immediate response and feeds you detailed information on steering direction, available purchase, and front-axle load.

On such tight roads you have to manage its weight and thrust so that you don’t push wide, as its stable spread of grip prefers to use the car’s outside front tyre to turn, rather than use a hoisted rear axle to get into corners.

More flowing roads that surround Victoria’s Mount Beauty reveal the car’s element. The i30 N tracks along a neutral line and encourages you to get into the throttle earlier, the brakes later, or carry more speed.

The roads don’t challenge the car’s ride as much as we’d hope, which is a shame because Australia is the only country to go against Biermann’s order for one suspension tune.

It’s on the firmer side of things, but the fact we use its hardest damper setting more than we ever did in Europe suggests local work has unlocked a more usable ride. 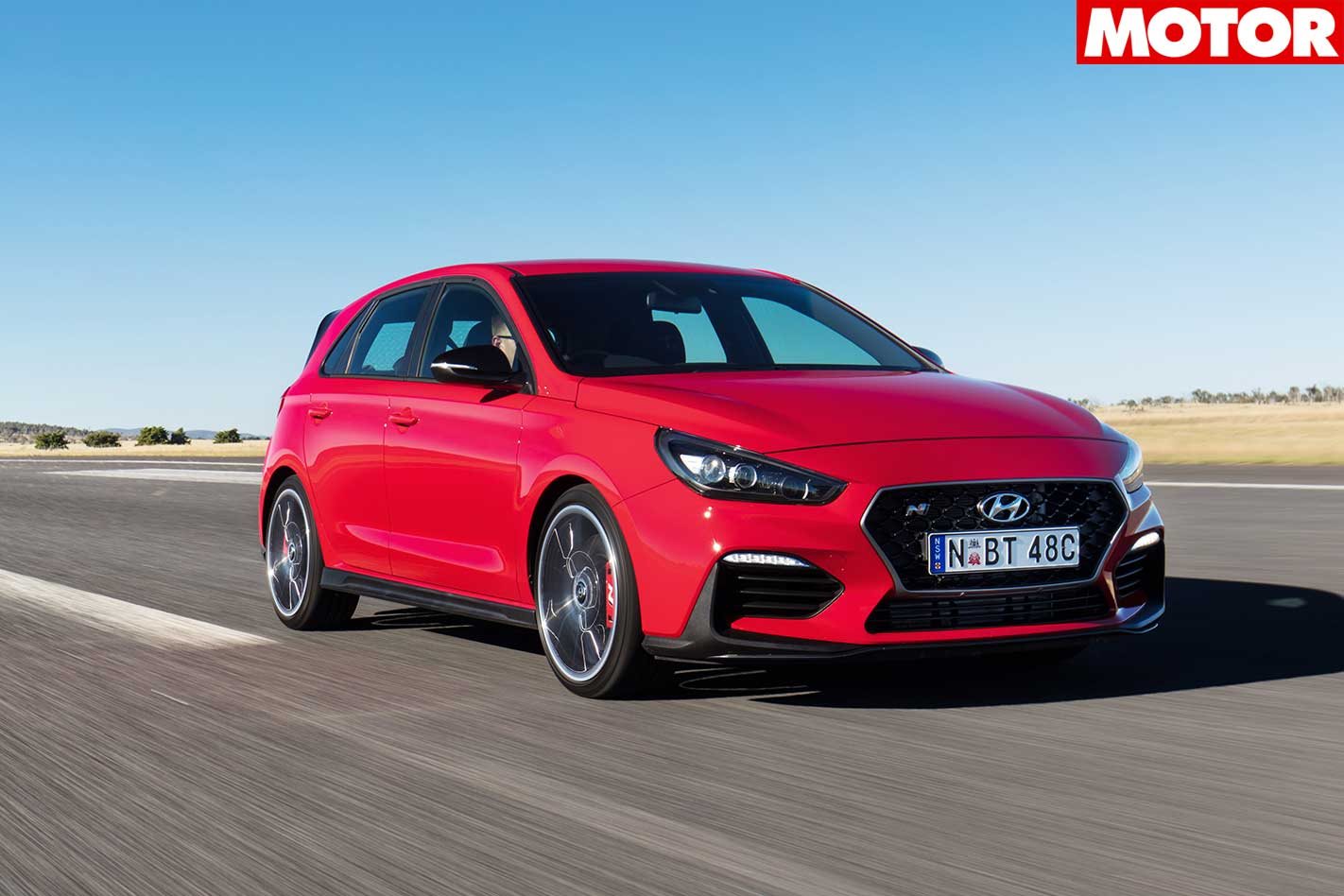 Caning the i30 N at Winton Raceway shows it hasn’t come at the expense of outright performance, either. The Hyundai piles into the track’s tight low-speed corners with acres of grip and shoots from them with unbelievable drive.

On-hand rally ace Brendan Reeves says a softer damper setting is faster on the track’s slippy surface. But while it adds more roll at the rear, we don’t find it unlocks Megane RS levels of rotation.

Whether you like it or not, the rev-matching proves brilliant on track. Reeves agrees it is one less thing to worry about, the system blipping on cue on every downshift. Its brakes, which slightly soften at the top of their travel after all this abuse, still are full of feel and offer loads of precision for a single caliper system. 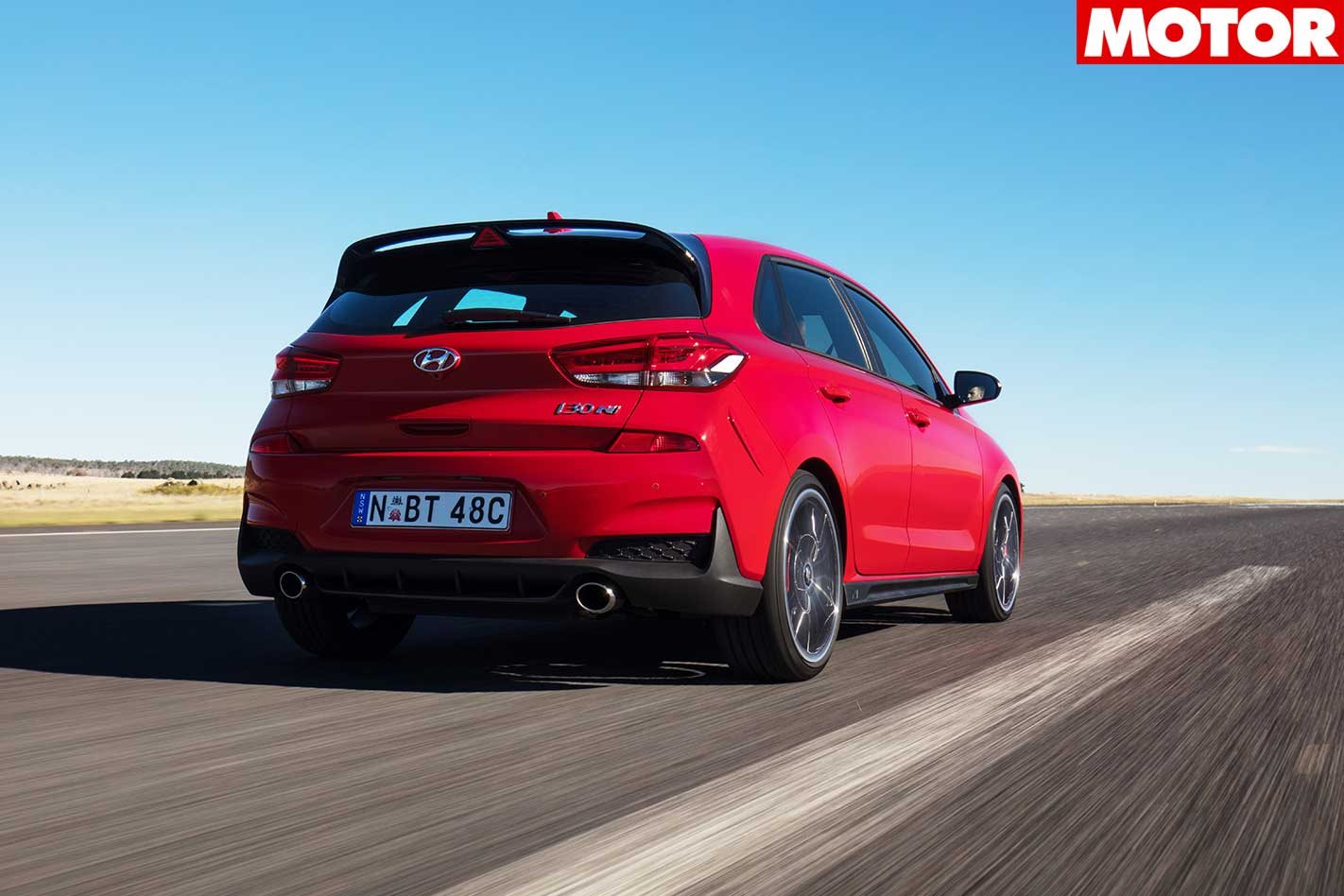 Perhaps the most impressive thing is the car’s reliability. We’ve seen carbon-ceramic brake systems smoke after three laps. The i30 N, though, after almost 500km of road testing the day before, laps all day without fault.

We steal one for the drive home to Melbourne from Winton Raceway. And it’s surreal that the Hyundai’s brakes, engine, and clutch are fresh enough for a two-hour highway blast. On top of that, tyre drone isn’t terrible and the seats (in standard or luxury trim) are still wonderfully comfortable.

Even though the chubby front pillars make seeing through corners slightly difficult and the car's primary ride might have not been fully ironed out, there’s a duality to this car that reminds us of a Porsche 911 GT3. Of course, it’s nowhere near as rewarding or stimulating. Even on a hot-hatch level. It’s more the capability to swap between a club racer or regular hatch that spread the i30 N’s breadth of ability so wide. 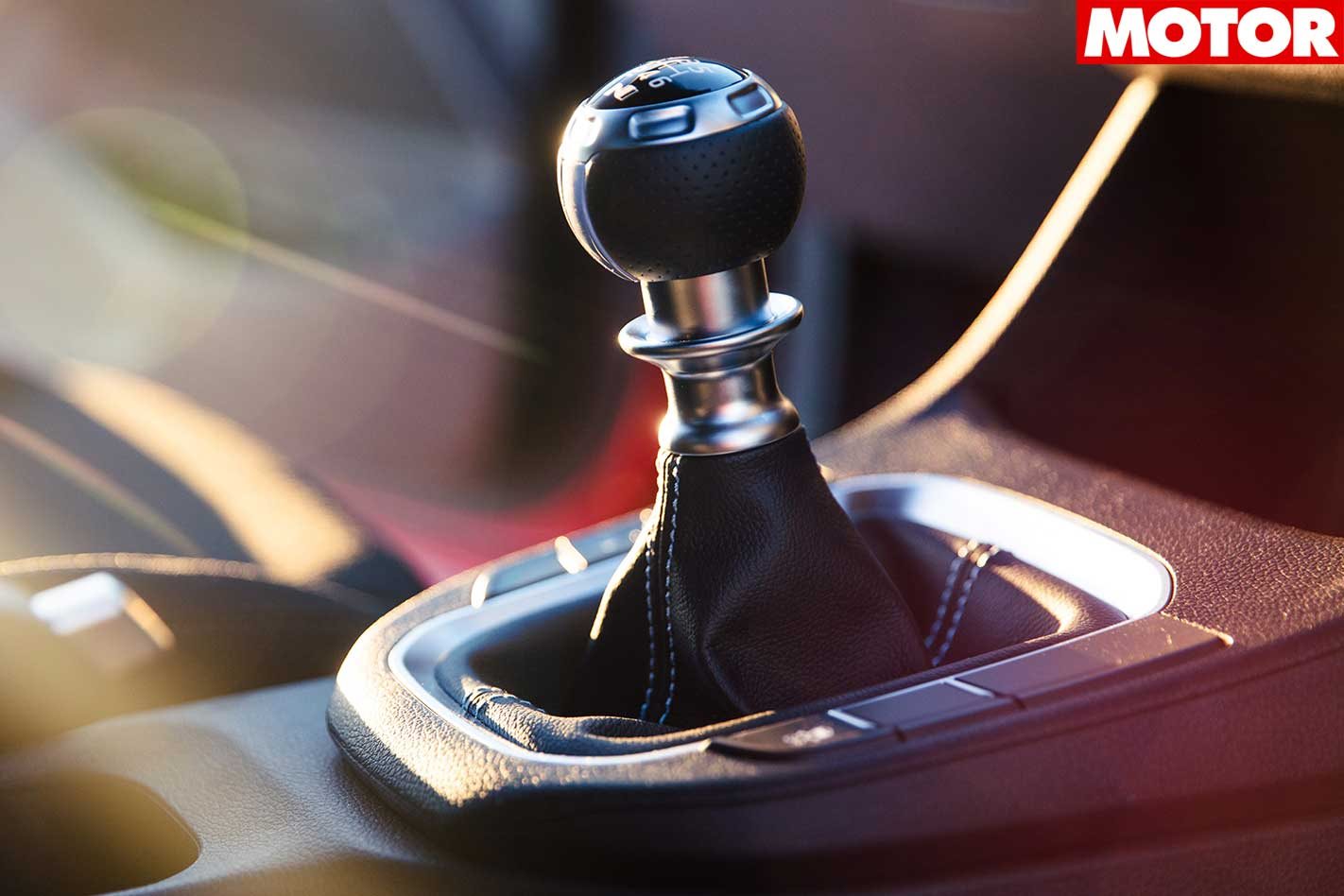 Even with aero-friendly lips, spoilers, and sills (claimed to create downforce) the i30 N glides past other cars without much notice. Throw in a track friendly five-year warranty and there’s little to argue with.

Hyundai has nailed its first ever hot hatch. The question remains whether it can drive a stake into established rivals?

We suspect the more precise Honda Civic Type R is faster, and the Golf GTI Performance Edition 1 more liveable, but the beauty is that the i30 N is priced almost $8K clear of both.

At its price, Volkswagen’s newly created Golf GTI Original and Renault’s Megane RS are all that stand in the way of glory. Yet by this showing maybe Hyundai isn't the one who should be worried. 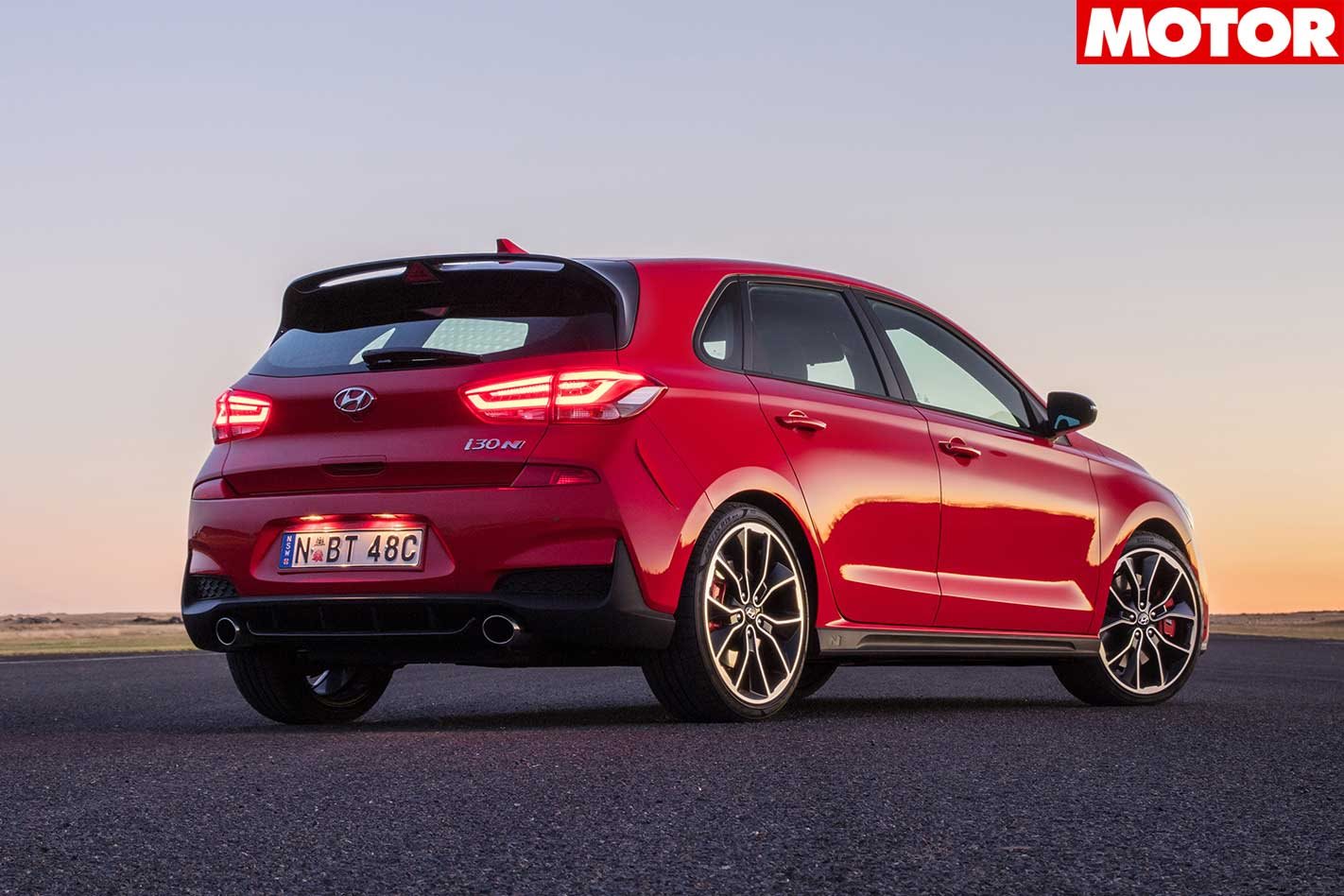 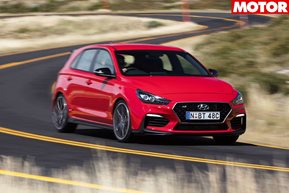 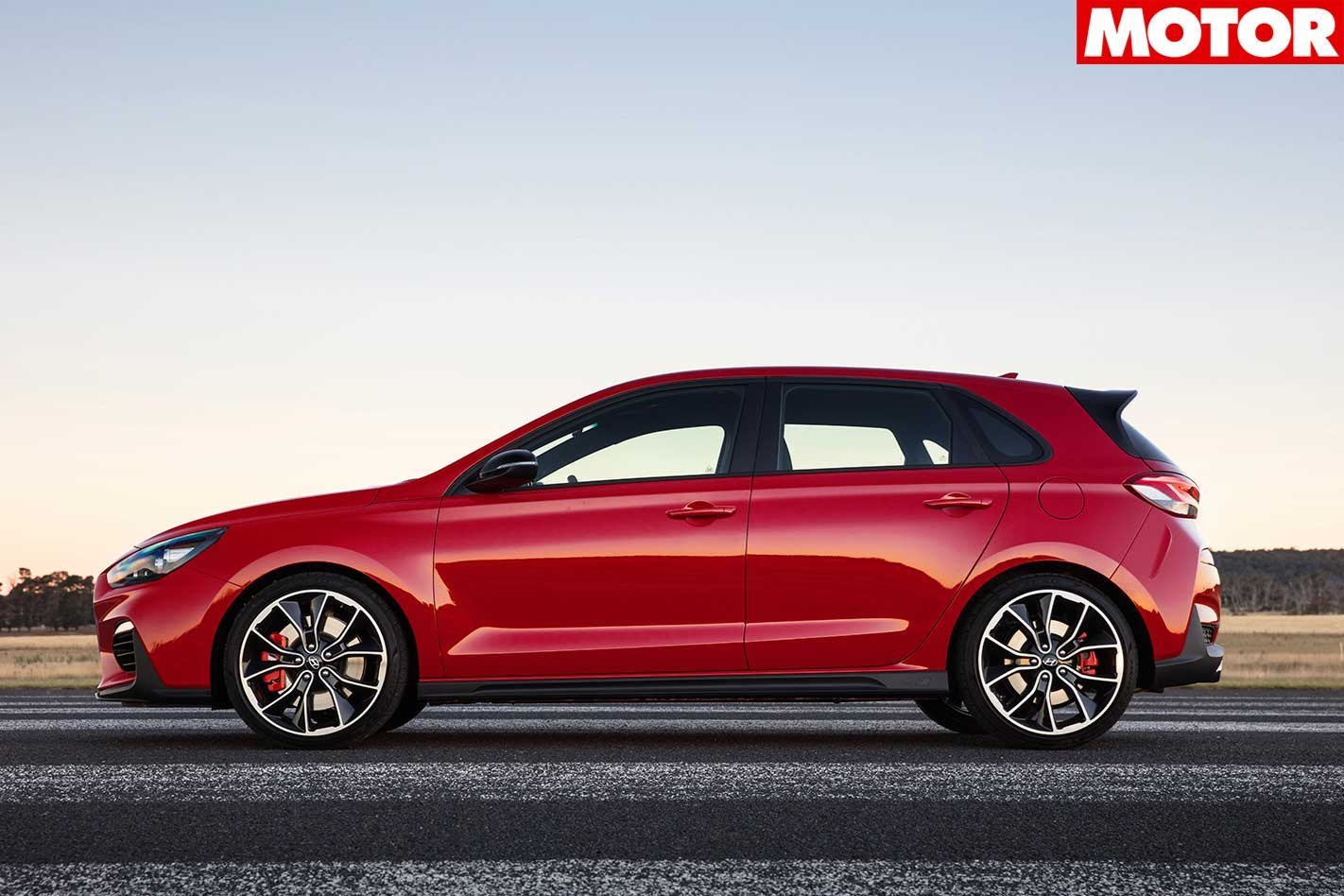 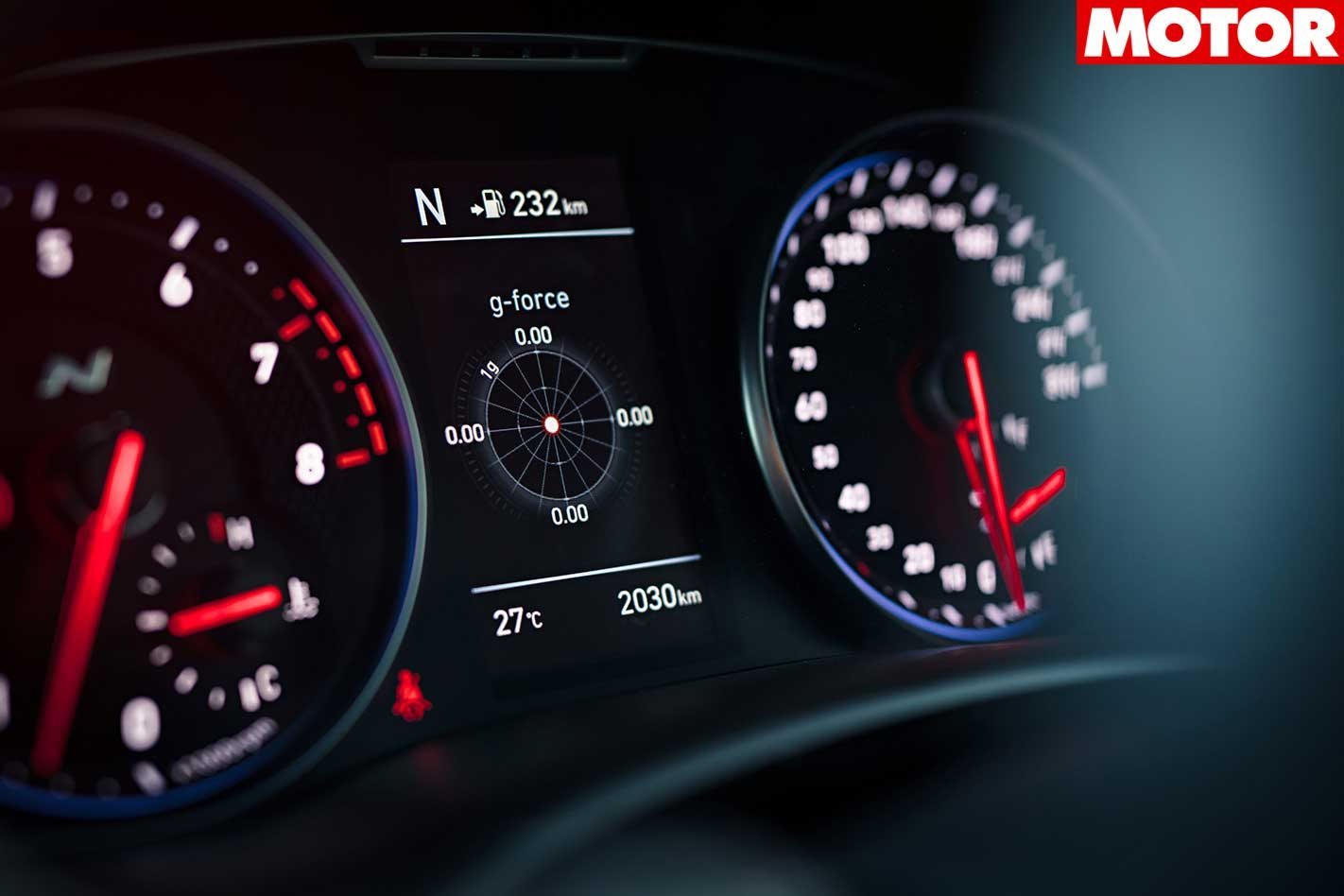 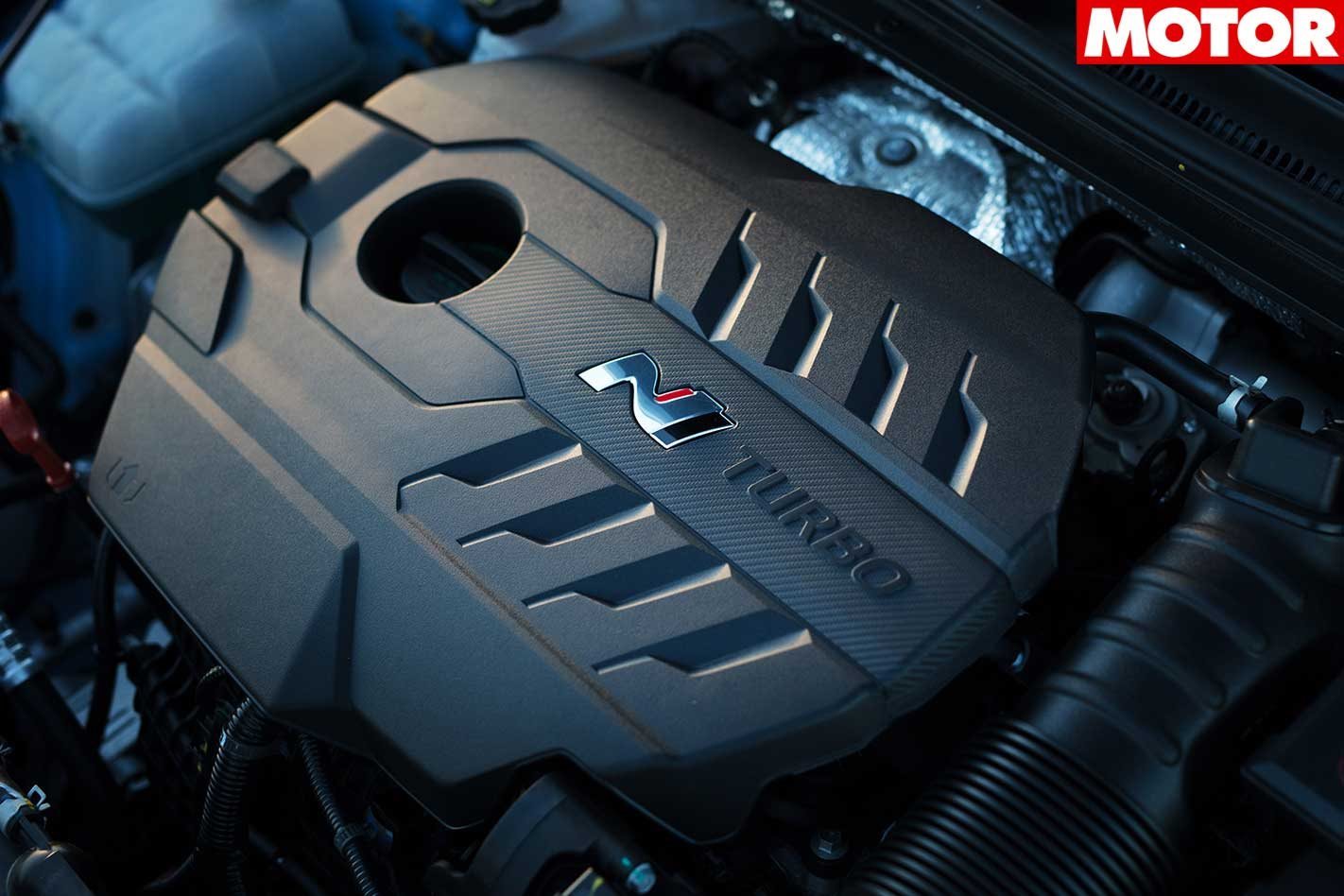 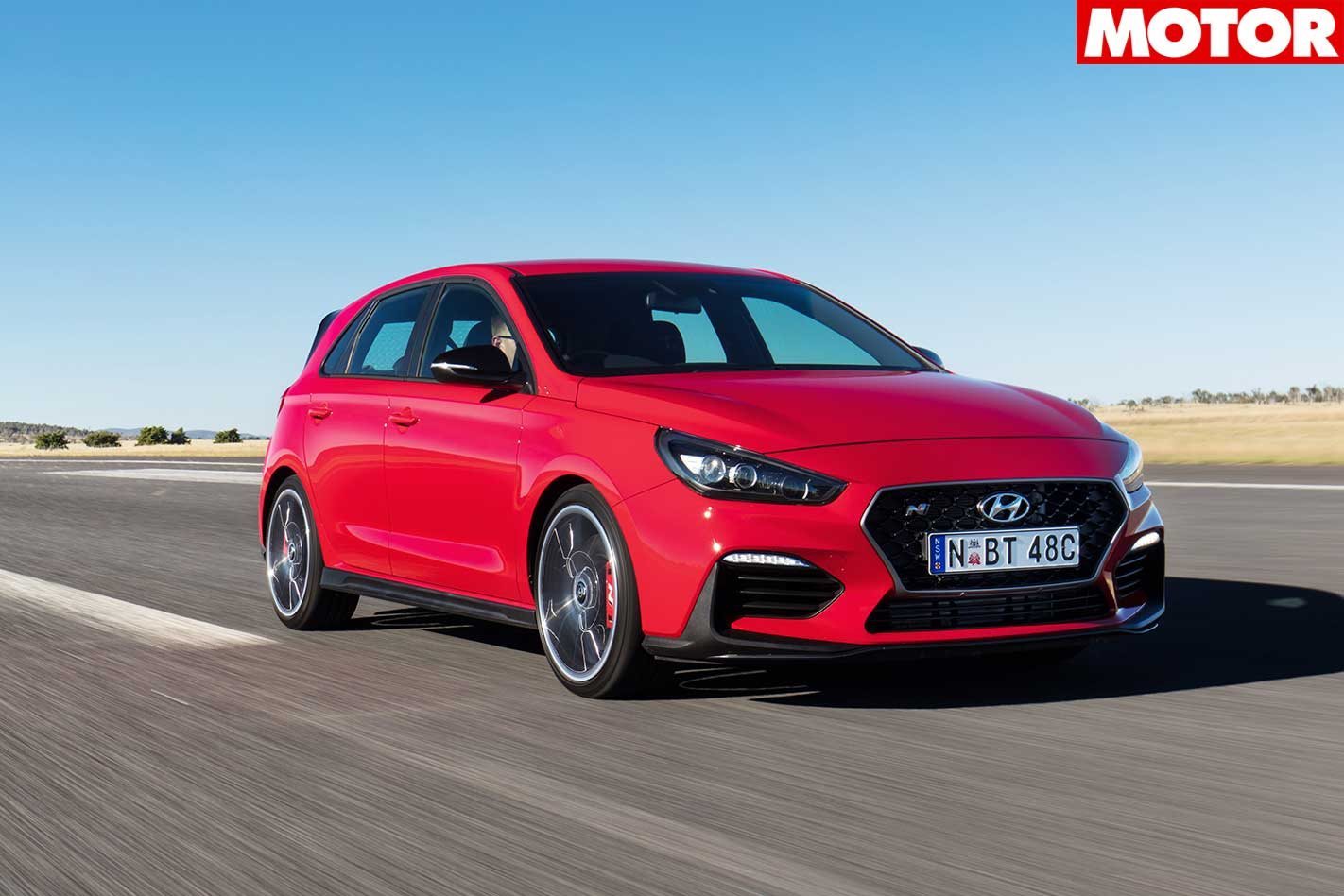 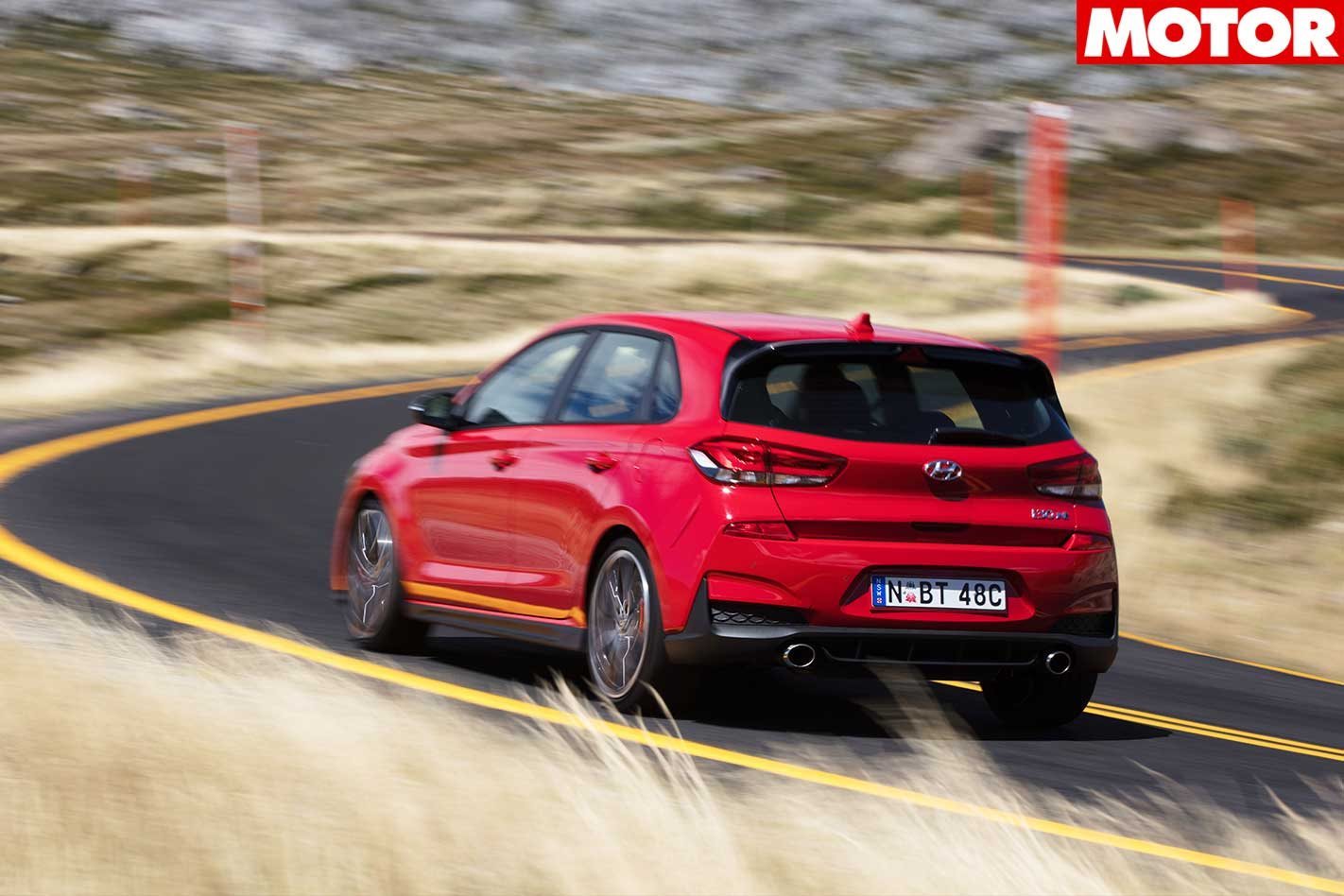 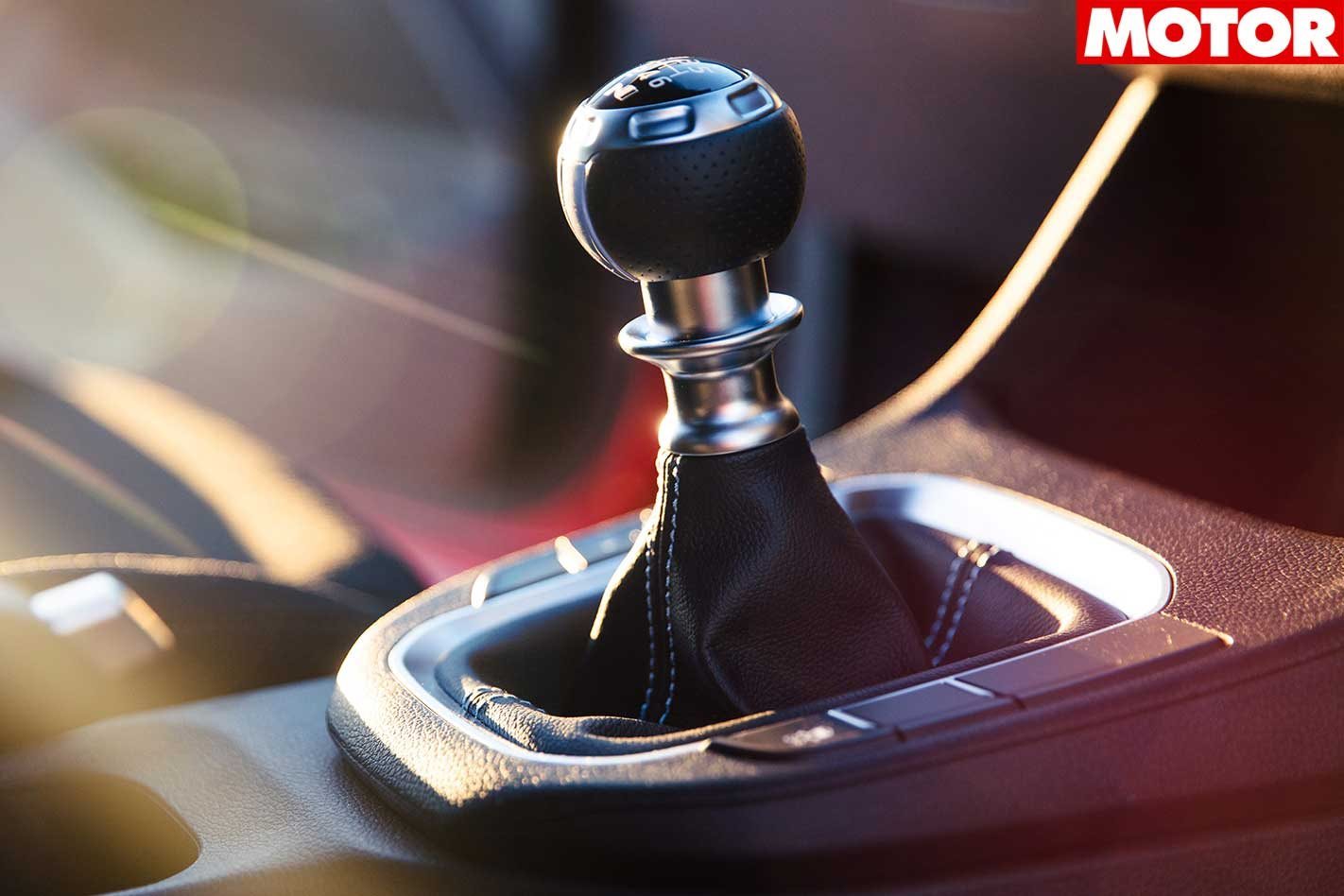 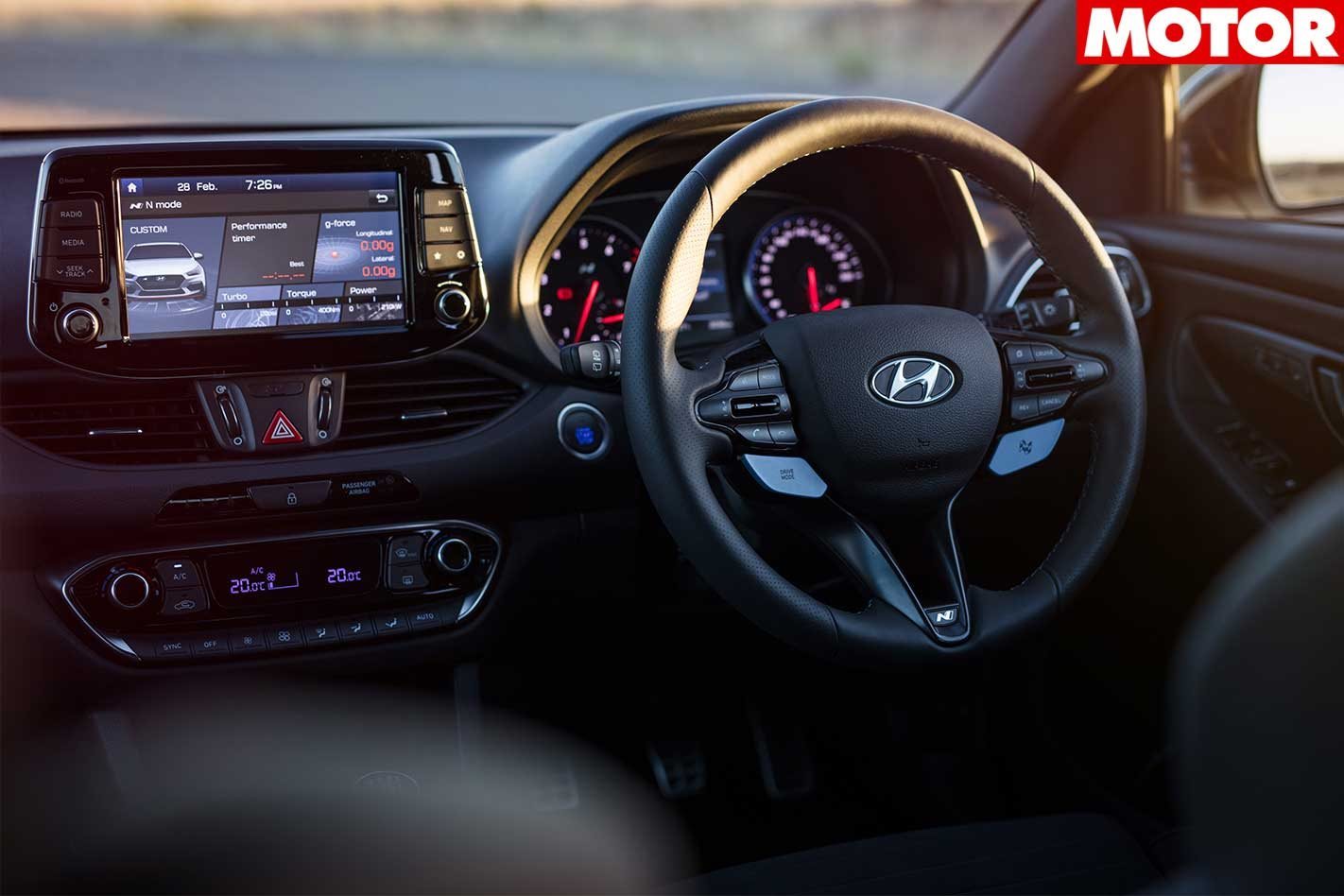 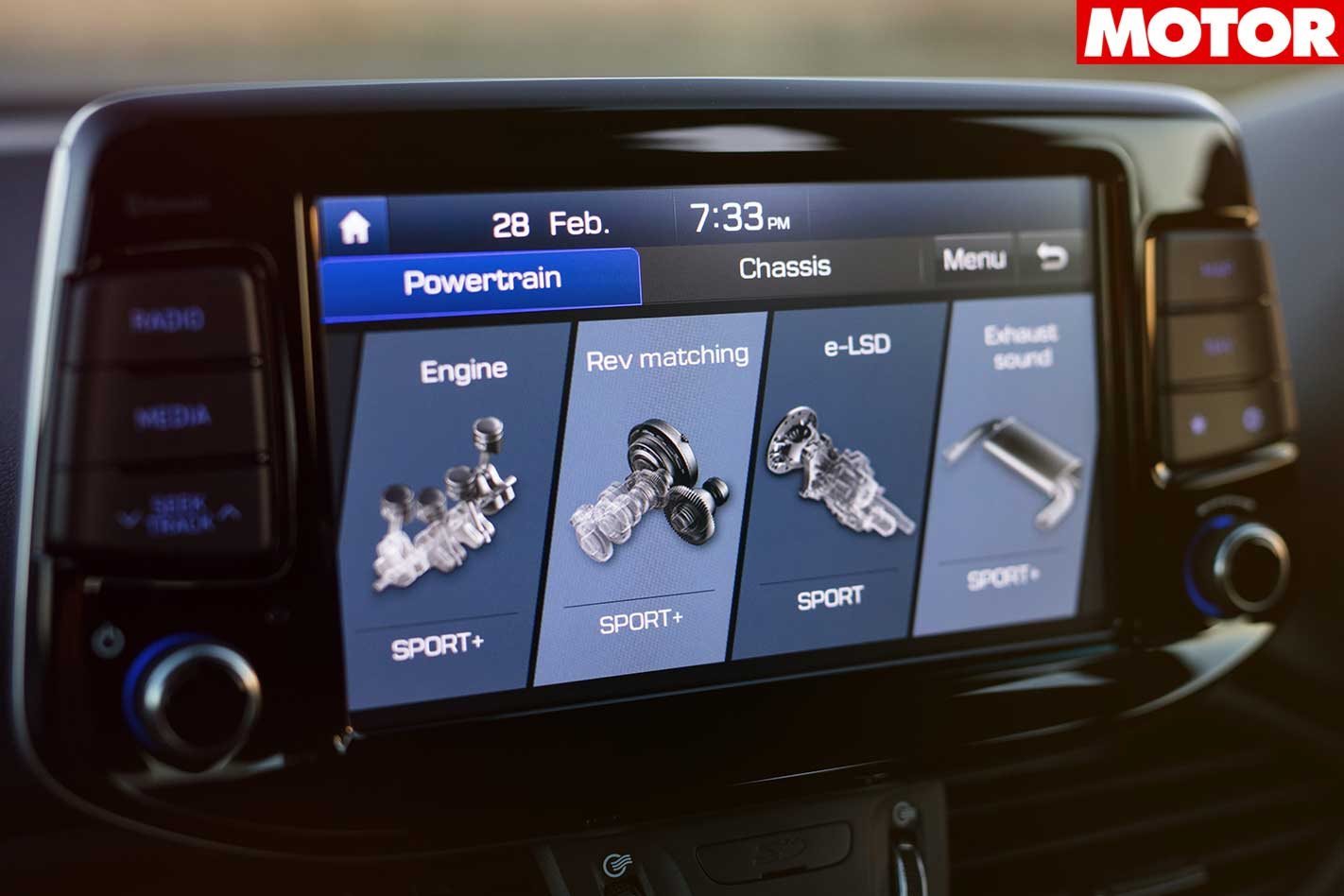 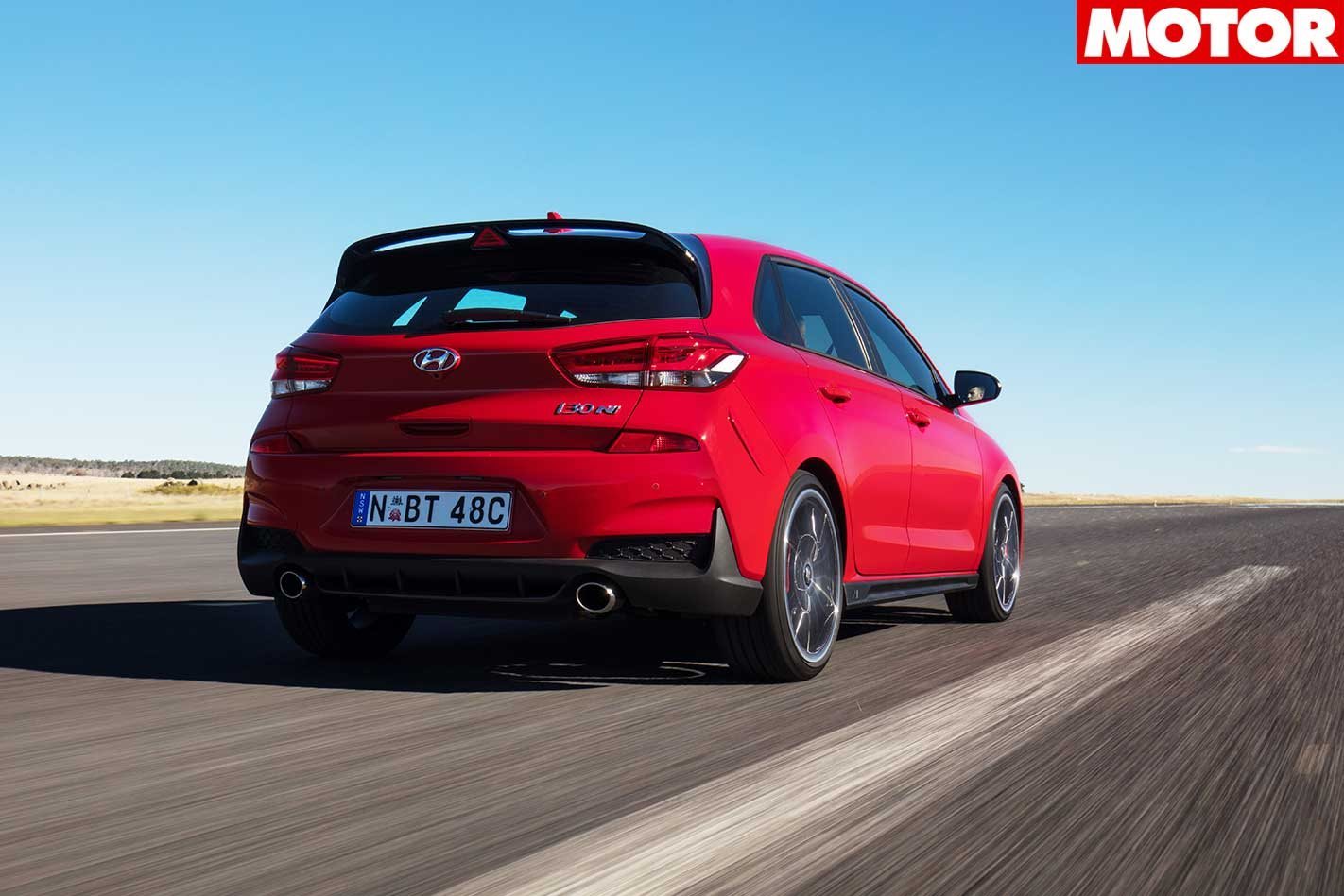 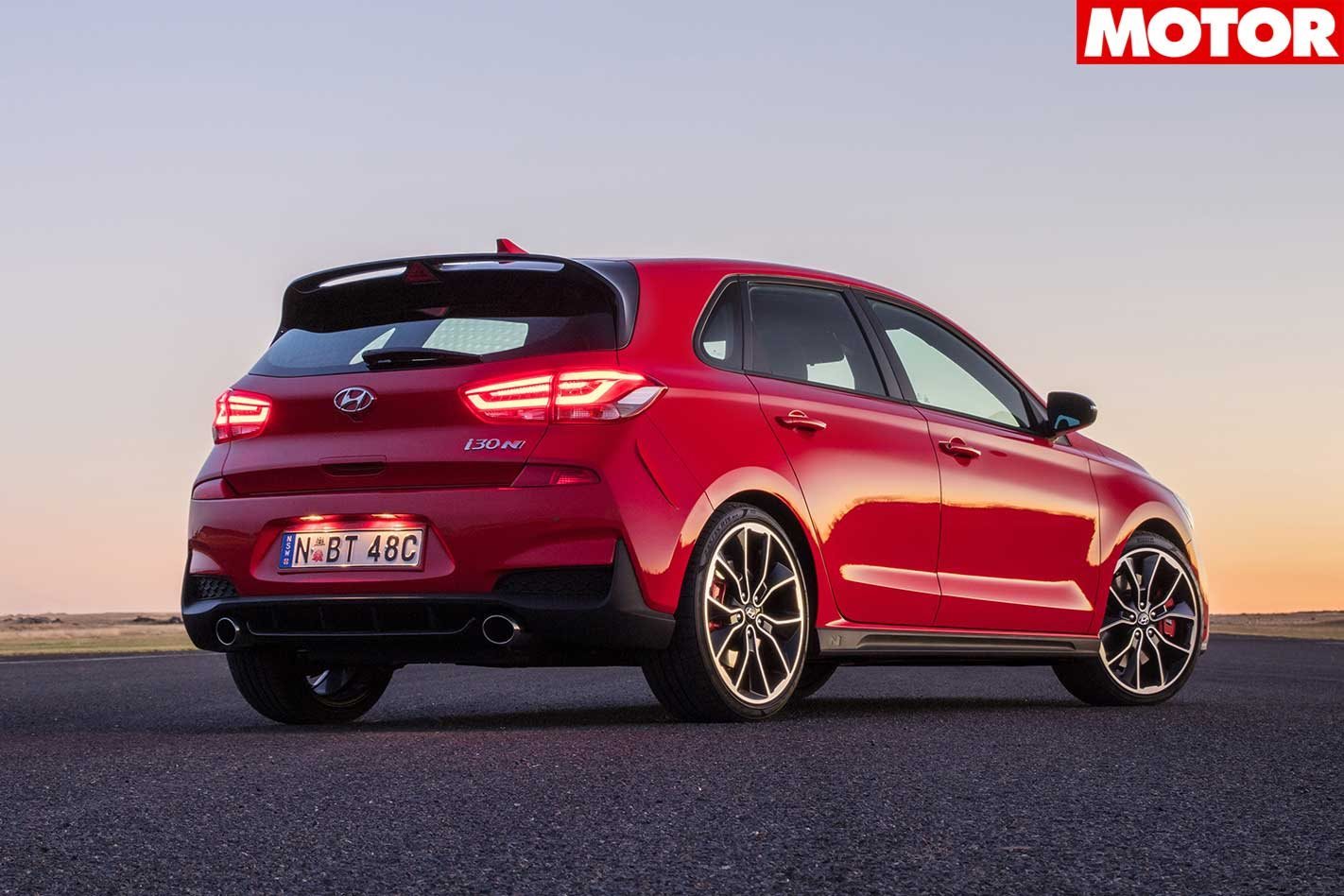