The most interesting Aston Martin in ages, the DB11 introduces a new V12 engine and all-aluminium platform, and provides a first taste of the fruits of the brand’s tech tie-up with Daimler

The most interesting Aston Martin in ages, the DB11 introduces a new V12 engine and all-aluminium platform, and provides a first taste of the fruits of the brand’s tech tie-up with Daimler.

WHAT IS IT?
Big 2+2 GT with oodles of almost everything. There’s design drama outside, leathery luxury inside, a beast beneath its bonnet and chassis sophistication down below. All it lacks is room for rear seat passengers and luggage.

WHY WE’RE TESTING IT
This is a hugely important car for Aston Martin. The DB11’s architecture will provide the foundation for a new generation of road cars from the brand, including an SUV, and its twin-turbo V12 is sure to power future top-end models. When executives say the DB11 launches Aston Martin’s renaissance it’s not really an exaggeration. With so much riding on it, how could Wheels decline an invitation to the car’s international press launch in Italy? 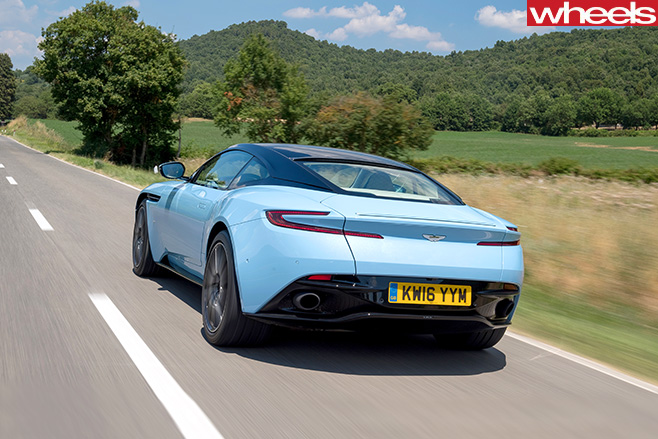 MAIN RIVALS
Bentley Continental GT and Porsche 911 Turbo for sure. Maybe the Maserati Gran Turismo, but the Italian lacks youth and power compared to the Aston Martin. At a (big) stretch, the Ferrari F12 Berlinetta or even the GTC4 Lusso.

THE WHEELS VERDICT
Suavely charming most of the time, and plenty quick if required, the DB11 is the most convincing Aston Martin in years. New V12 is a great engine, delivering exactly the kind of performance promised by the exterior design. 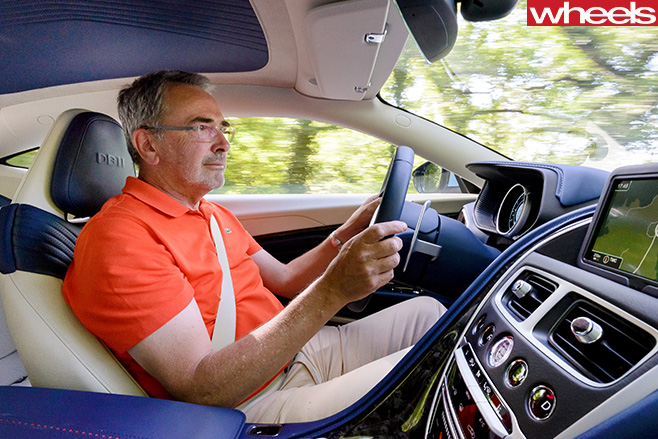 THE WHEELS REVIEW
SHANGHAI Fashionista sports mainly pale blue metallic paint, but has glossy black topsides. It’s not the kind of colour combination you expect to see on an Aston Martin. No sign of Savile Row-style understatement inside, either. The cabin’s blue and ivory leather is extensively patterned with stitching, perforations and shoe-like brogueing.

This look is one of six designer specifications created by Aston Martin to show the breadth of colour and trim choices available to buyers of its new DB11. Other looks have names like Mysterious Sport, New Heritage and Iconic Craft, none of them quite so loud and adventurous as Shanghai Fashionista.

Together they testify to Aston Martin’s ambition to ensure its big new 2+2 GT has truly global appeal. This is a car designed to satisfy the fantasies of those special people with a lot to spend ($395,000 in Australia, when it arrives late this year), regardless of where they live, their cultural background or personal taste. But the DB11’s eye-catching colours and eye-watering array of interior finish options are, in truth, mere superficial details. 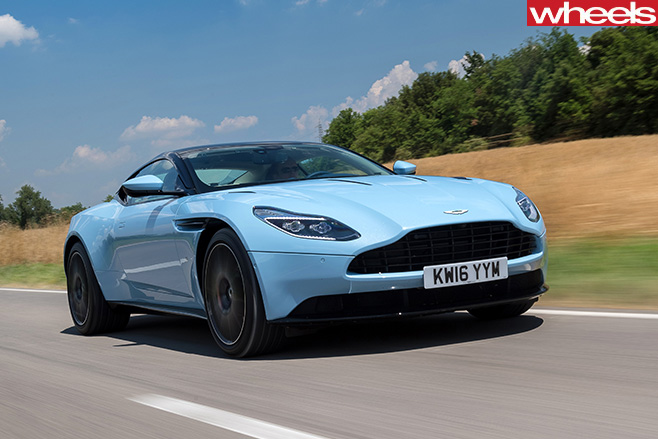 The DB11 is a hugely important car for Aston Martin. Not only is it a replacement for the ageing DB9, it’s also the cornerstone of a plan to revive the brand. The all-new and all-aluminium architecture that debuts with the DB11 will also provide a foundation for a new generation of Astons; first up, replacements for the Vantage and Vanquish, then, in 2019, the DBX crossover SUV.

Aston Martin’s owners, mainly hard-headed investment companies, have agreed to fund development of the new products, up to and including the DBX. From that point onwards, they expect Aston Martin to be a self-sustaining operation. While high-priced, low-volume specials will generate some cashflow, it’s the models built on the new architecture that will have to do most of the work. So you can see why the DB11 needs to be good.

As if this pressure wasn’t enough, the car also introduces a brand-new engine. The DB11’s 5.2-litre twin-turbocharged V12 was designed in-house. 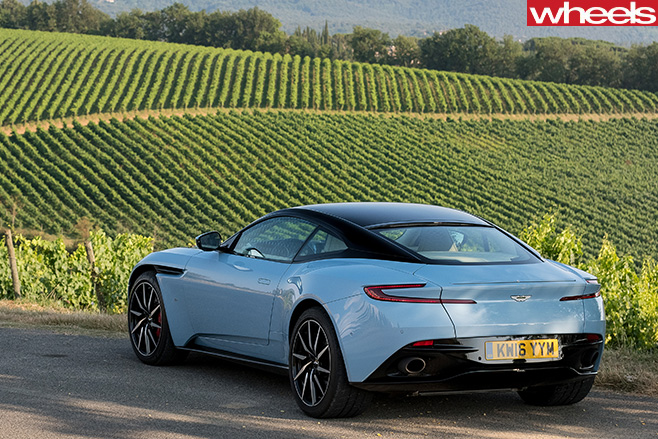 The engine is a beauty. If Shanghai Fashionista conjures an image of spike heels, flooring the DB11’s accelerator makes you think spiked soles. There’s surging torque from anything over 2000rpm, and the Aston engine feels stronger low down than Ferrari’s higher-revving non-turbo 6.3-litre V12. Sonically, the DB11 engine is at its regal, roaring best around 6000rpm, not far short of its 7000rpm limit. Aston claims a 3.9-second 0-100km/h time, and this feels credible.

The V12 is connected via a torque tube to the DB11’s rear-mounted eight-speed transaxle. The transmission is a beefy version of ZF’s popular automatic, designed to cope with the Aston’s 700Nm torque output. 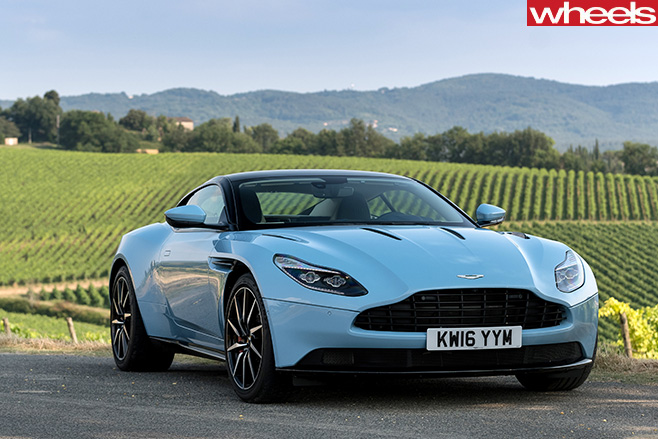 While the transaxle location is good for weight distribution – 51/49, according to Aston – the layout eats into boot space and rear passenger room. The DB11 is a big car, especially in width, but has only a 270-litre cargo compartment. The car’s broad transmission tunnel also cramps the pair of individual rear seats, but the greater concerns back there are the lack of head room and knee space thanks to the car’s elegantly aggressive exterior proportions.

Up front in the DB11 there’s much to enjoy. The leather that’s everywhere is flawless and beautifully stitched. The car’s buttons, knobs, switches and screens are straight from Mercedes, a result of Daimler’s five percent ownership of Aston Martin and a technical tie-up inked back in 2013. They don’t look out of place. 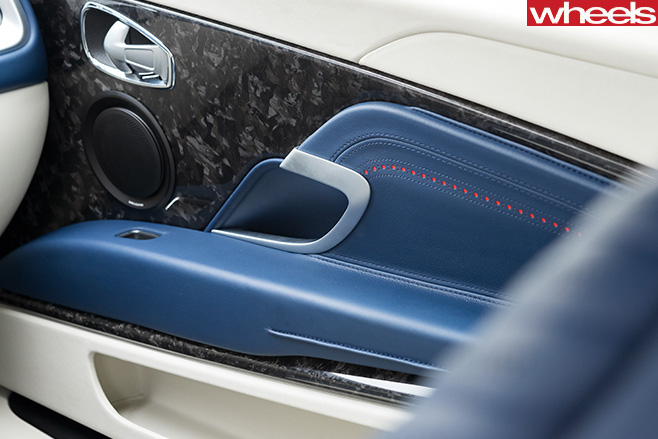 The DB11’s driving position is fine and the front seats are both comfortable and supportive. Save for the too-bulky steering wheel boss, it’s a good-looking environment, too. The instruments are screen displays, which vary with the driving mode selected. There are separate mode selection switches for chassis and drivetrain, located above the familiar Mercedes hardware on the left and right spokes of the steering wheel.

Aston Martin designates the DB11 a GT, and the car’s GT mode leans heavily in the direction of Turismo. It’s perfect for high-speed cruising on an Italian autostrada, where the only niggle is wind noise that seems to be generated by the mirrors. But on a winding Tuscan backroad with the chassis set to GT, the DB11 feels Labrador-puppy lollopy.

Flicking to Sport mode on both buttons increases steering weight, drivetrain responsiveness and remedies the lack of damping, with little loss of the chassis’ impressive ability to absorb lumps and bumps. It’s the best mode for spirited public-road driving, better than the stiff Sport Plus chassis setting. The Aston may be a big and bulky bugger, but Sport encourages the driver to exploit its V12 and the grip of its 20-inch Bridgestone Potenza S-007 tyres. 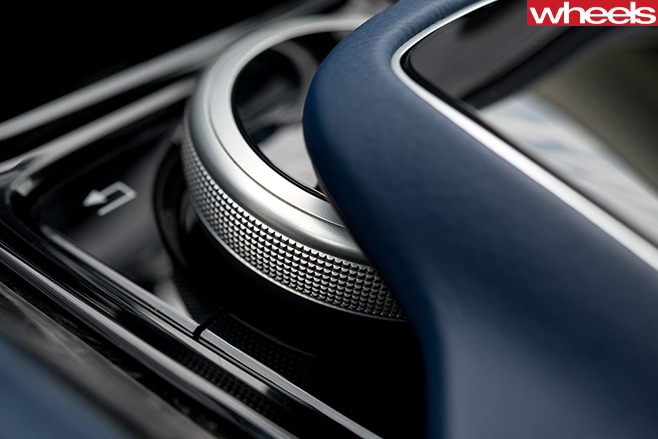 It doesn’t take too much courage to find some classic rear-drive oversteer, which is deftly checked by the chassis electronics. Over-ambitious corner entry speeds lead to the discovery of gentle understeer. The DB11 responds best to a fluid rather than ferocious driving style. And the harmony of the electrically assisted steering, sweetly balanced chassis and strong brakes make it an easy car to enjoy when driven this way.

Equally easy is imagining how the DB11’s obviously excellent essentials could be adapted for greater power and speed. Aston Martin’s revival is off to a convincing start – even dressed in Shanghai Fashionista blue.