Ninth generation brings its advance from the rear.

IN A world increasingly consumed by SUV ownership, it’s easy to overlook the virtues of a really well-executed wagon. The lighter weight, lower centre of gravity, lower drag coefficient, improved driving dynamics, and to this wagon lover, at least, the generally sleeker and more sporting aesthetics all trump a higher seating position and light-duty off-road ability.

A good wagon visually speaks of utility and true day-to-day functionality, rather than suggestions of rugged recreation that rarely happens.

But the world hasn’t completely fallen out of love with the wagon. In Australia, Audi’s new B9-generation A4 Avant aims to seduce those not sold on a Audi Q5, or its rivals from BMW and Benz. Audi expects to move around 60 per month (against around 250 sedans, admittedly) so its business case is still as solid as the thunk of its doors.

And its powers of seduction are strong enough to sway even ardent SUV lovers. This new generation Avant is 26mm longer than the outgoing B8 model, but underpinned by a 12mm longer wheelbase, so its overhangs remain tightly contained.  It’s only 2mm lower, but its stance is made more planted and purposeful thanks to a 16mm increase in width to the wheelarches, and an 8mm wider track than the B8.

Drag is up slightly on the sedan, but still low at .29cd, and repositioned exterior mirrors help see it slip through the air stealthily.

Before checking out the load carry capabilities, take a quick dive under the bonnet: the main change compared to the outgoing line-up, is the deletion of a diesel variant. The old 2.0-litre TDI was taken up by only five percent of Avant buyers, so it’s gone, cleaving a way for a two-model line-up. The new kids are both 2.0-litre turbo petrols with seven-speed dual-clutch (S tronic) transmissions. The entry-level is front-driver, delivering 140kW/320Nm. The next level up is a high-output AWD quattro model punching out 185kW/370Nm. It’s handy, yes, but remember that this engine is offered with 210kW/380Nm elsewhere in the Audi range.

The price of entry also rises with this new generation, offset to some degree by the increase to standard spec. The front-driver is $63,900 — $3000 more than the equivalent sedan, while the high-output quattro variant helps justify its $9000 rise over the FWD model (to $72,900) with standard 19-inch wheels (the entry-level offering has 18s) and larger brakes, among other upgrades.

The rear is where the Avant’s USP sits, obviously, and it’s accessed via a standard electric tailgate that opens with one quick air-swing of your foot below the bumper line. It rises to reveal a beautifully trimmed and finished cargo compartment that’s marginally larger than the old model with the seats up (+15 litres) and up an appreciable 80 litres (to 1510L) when the rear seats — now split 40/20/40, rather than the less practical 60/40 of the old model —are folded. 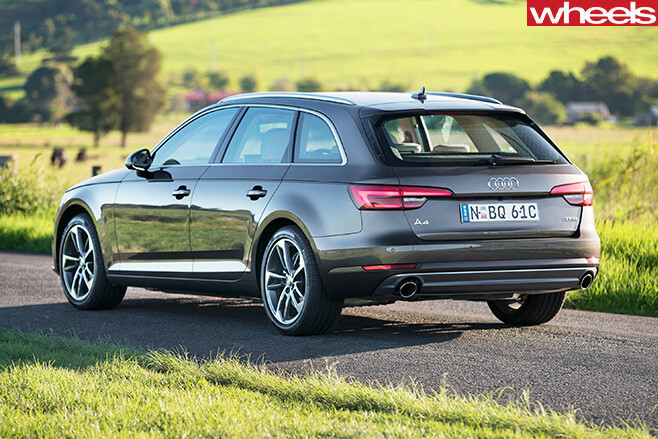 Seat releases are located in the cargo compartment, but new touches include LED strip lights on either side of the inner arches (vodka-bar cool in your cargo compartment!) and the option of a load-area rail system with load-securing kit (reasonably priced at $350) that stores neatly in an underfloor nook, forward of the spare-wheel well when not needed.

And let’s not forget the main floor panel, which can be flipped to reveal a durable, laminated surface for when your gear is too wet/muddy/sandy/stinky for the carpeted side.

So, the load-carrying ability and attention to practical details score bullseyes; the driving dynamics really don’t differ appreciably from the sedan variants. The extra power and tractive benefits make the quattro Sport the obvious choice for keen drivers. The 19-inch wheels don’t ruin the ride either, especially when teamed with the optional ($1700) 10mm-lower adaptive comfort suspension. Audi’s chassis engineers still insist on a steering calibration that seems to want to isolate, rather than involve you with the driving experience, no matter which setting you choose from the adaptive drive menu, but even this isn’t enough to mar the whole Avant experience.

The crisp, responsive drivetrains, styling, practicality and all-pervasive ‘premiumness’ make sure of that.

And for that extra peace of mind…

For A4 owners a bit nervy about crashing their new Avant, Audi offers an optional assistance package that, for $1900, crams in a startling array of avoidance or mitigation systems. Along with the usual lane assist, adaptive cruise control (with stop and go and traffic jam assistant), there’s a pre-sense system that prepares the car for rear-end impact, turn-assist –  which prevents you turning into the path of an oncoming car – and ‘exit warning’ which alerts a driver about to open a door into the path of a cyclist.

The assistance isn’t just limited to avoiding the ugly stuff though: predictive efficiency assistant uses the navigation system to scan the route and advises via a dash symbol when it’s advisable to lift off the throttle, such as just before the crest of a hill that has a roundabout on the other side, for example.