An SUV in its fourth generation? Wow, that must be one of the oldest SUV model line-ups in existence. Hang on, it is.

BMW’s X5 is the SUV that started it all, the big, soft four-wheel-drive that convinced the world they no longer wanted sedans and wagons. Twenty years since the Bavarian car maker first revealed the E53 it has sold more than 2 million X5s around the globe. It didn’t take long for rival companies to clue on to the fact that SUVs were big business; the X5 is now just one of a large group of premium SUVs on the market. So it’s got some competition to beat.

To see how the new model fairs we’ve been driving the diesel-powered 30d, which hits the showroom at $112,990 plus on-road costs. However, the PR department was nice enough to give us a few extras that include the M Sport Package for an additional $4000, massive 22-inch alloys at $3900, and a $2700 leather covered instrument panel. All up, the extras cost $18,100 and bring the total price of the car to $131,090. Ipso facto, it has a lot of convincing to do to prove that it’s worth its weight in gold. 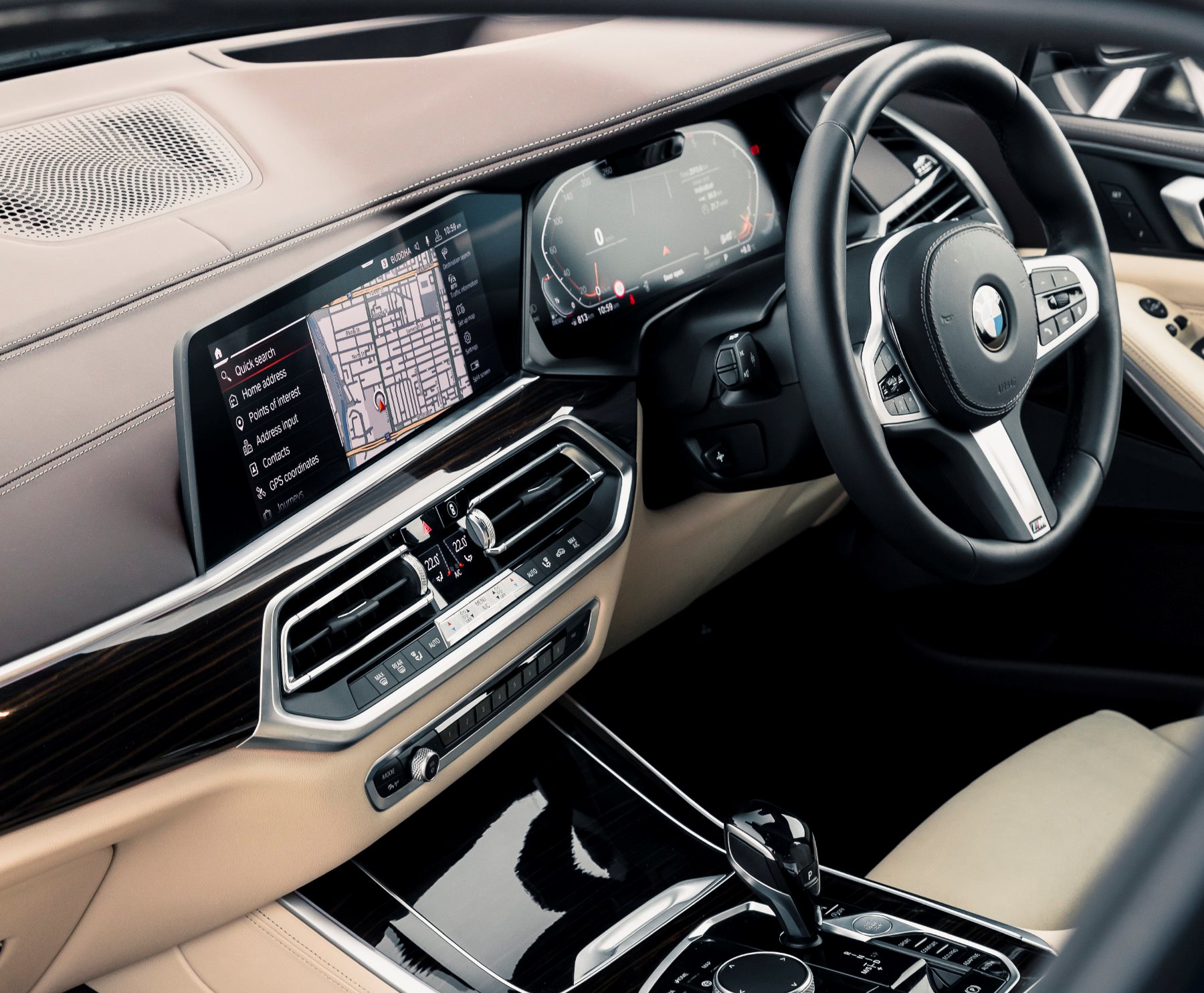 Trent Giunco
Staff Journalist
What an impressive engine, backed up by a drivetrain worthy of praise. It’s a combination that makes progress in the X5 30d effortless, especially given the 3.0-litre straight-six turbo diesel serves up a mammoth 620Nm. Although, you can’t forget its 2.1-tonne, meaning the claimed fuel consumption is hard to achieve when pushed. Optioning the HUGE 22-inch wheels without air suspension seems foolish. The interior is plush, with the X5’s cabin gaining a level of luxury that almost befits its exorbitant price tag (although it seems unfair not to receive heated seats in an SUV optioned up to $131,090). Still, it’s practical as a family SUV, but its looks are… challenging?

Felipe Ubilla
Art Director
The X5 30d offers a competitive package with its plush interior and nimble performance that hustles around town with ease despite its 2110kg weight. The interior also ticks all the right boxes, with plenty of space and a class leading infotainment system angled slightly towards the driver, hinting that the X5 has a driver focus - it absolutely please both the family and the concerning driver. Although, at a touch over $130k, we would expect heated seats.

Alex Rae
Online Editor
It’s easy to fall into a routine with the X5 when you start to live with it and its controls and ergonomics feel like they’re in a good relationship with each other. It’s not the biggest cabin in this segment but the boot is pretty huge, and the luxo-vibe is well executed. I’d have this diesel unit too, with its tremendous torque output easily catering for the weight underneath. The ride is too sharp for my liking, though, so I’d look at the equally-pretty but not as sharp-riding 20-inch alloys that come standard over these 22s.

Diesel SUVs are not just fuel efficient, long distance cruisers, as the 30d proves that the old oiler still has plenty of life in it, motivating the X5 to the point that it will keep up with hot hatches like the Hyundai i30 N. If you’re feeling really competitive, it even has launch control. 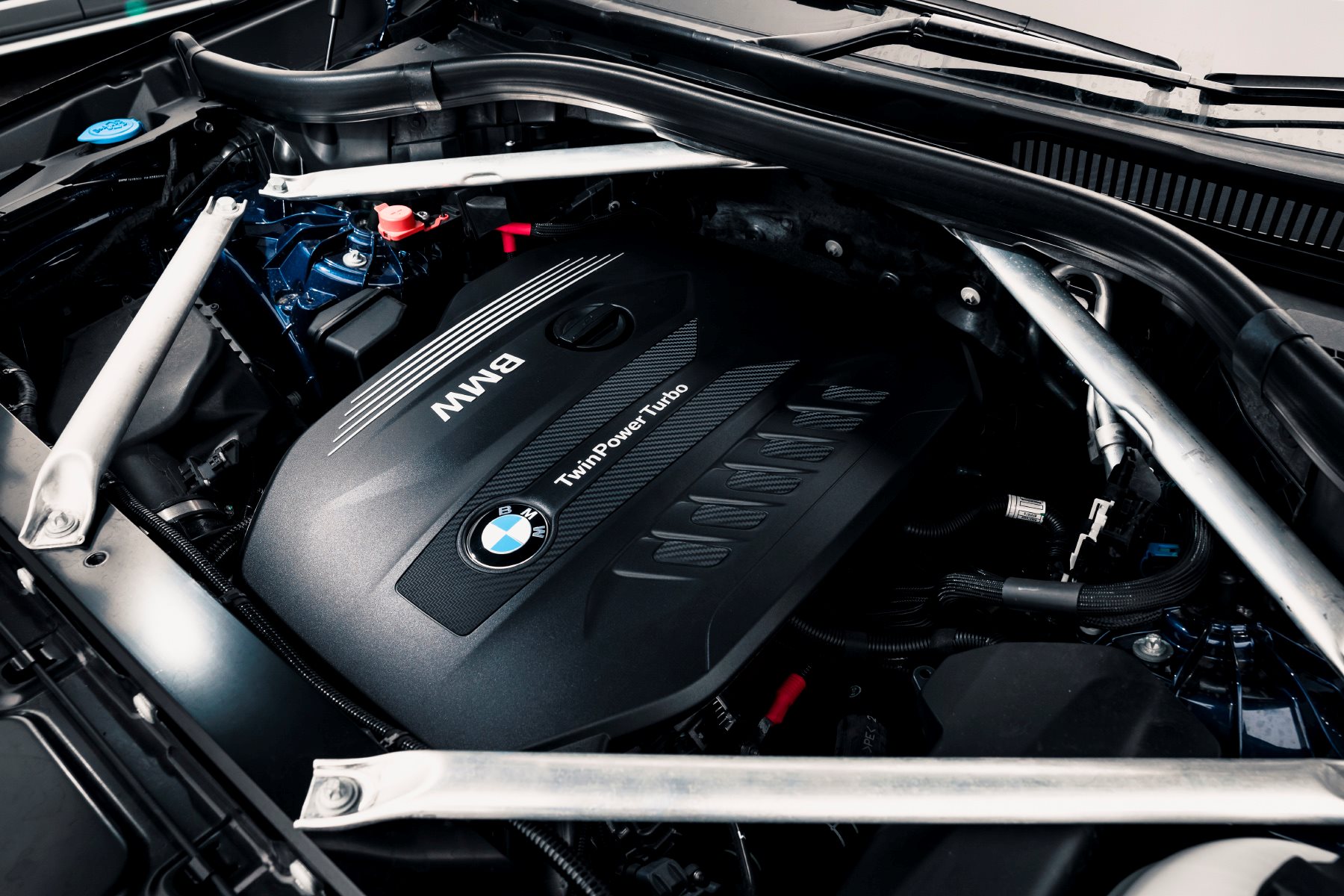 Helping the 30d launch off the mark is a 3.0-litre straight-six turbo diesel producing 195kW at 4000rpm and 620Nm at 2000-2500rpm. In our performance testing at Heathcote Raceway, we managed 0-100km/h in 6.6 seconds and a quarter mile sprint in 14.8sec. In short, it’s quick and responsive and more than enough for most urban requirements.

Beyond an energetic and immediate lurch from the line when the throttle is prodded, the drivetrain – connected to a quick reacting ZF eight-speed automatic and grippy all-wheel drive – is smooth and refined. At cruising speed it mumbles along quietly and even around town it isn’t intrusive with the usual rattle associated to a diesel. BMW is known for its sweet straight sixes, and that certainly extends to its diesel mill. But it might come at a cost, as the manufacturer-claimed 7.2L/100km combined fuel consumption figure was off by about 4.0L in our testing – though that included some runs down the drag strip. 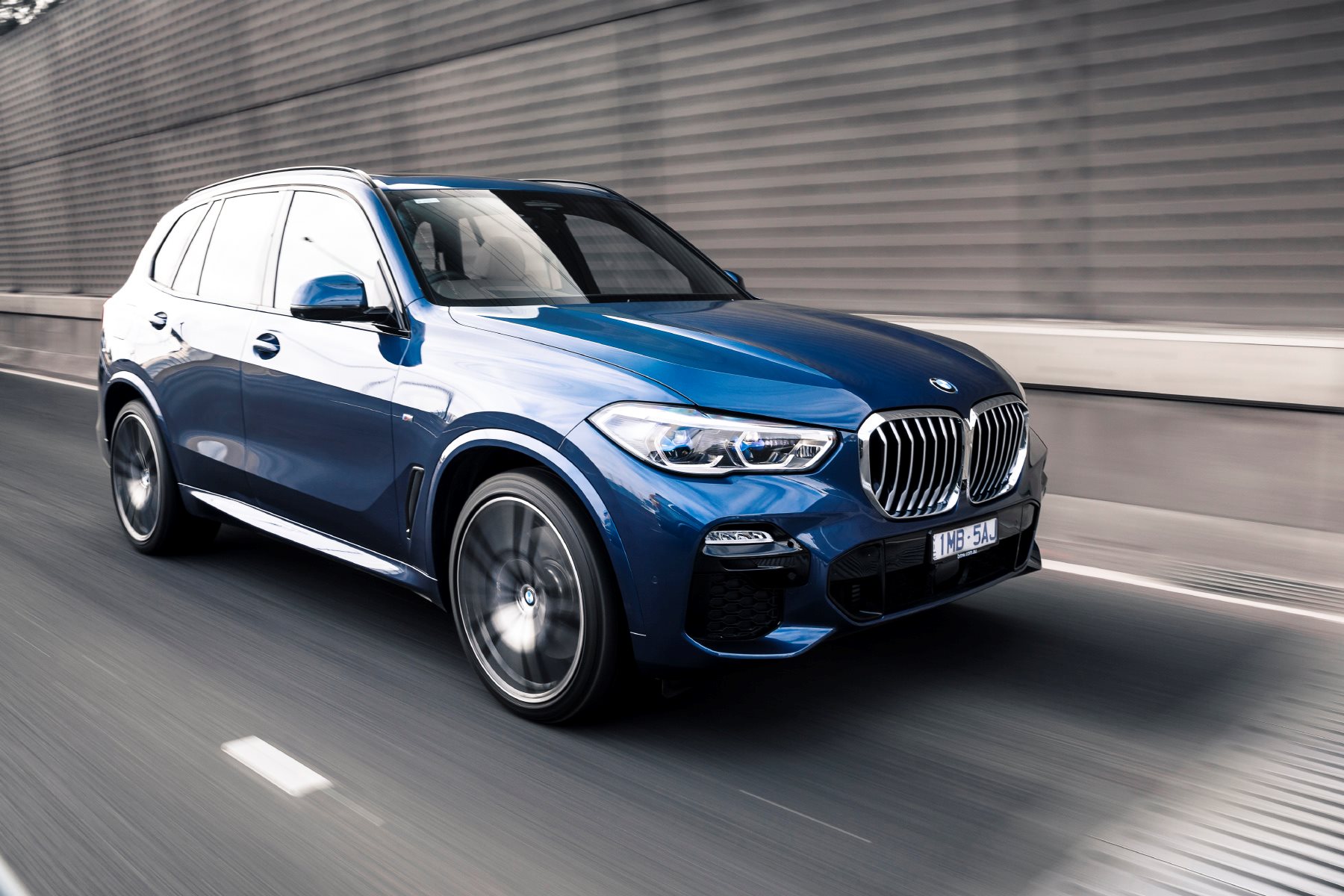 How do you hide the dynamic handling gremlins created by shoving 2.1 tonnes of weight in a tall SUV silhouette? Mostly, you don’t, and it’s a problem only compounded by the large cost-option 22-inch alloys with low profile tyres. Yes, there is adaptive suspension added to our test vehicle thanks to the M Sport Package, but it isn’t enough to keep the X5 from crashing over sharp bumps and feeling a bit edgy on its feet when cornering quickly. It is, however, a pretty smooth sailor in Comfort mode and on the right road – anything shy of unloved bumpy country bitumen and rotten city streets.

Adding more weight to the cabin, in the form of humans in the second row, makes it feel even harsher, but that’s really the price to pay for optioning a set of rims bigger than a TV set from the ’90s. On the flip side, the brakes are strong and bitey and pull up the big buses’ heft quickly. 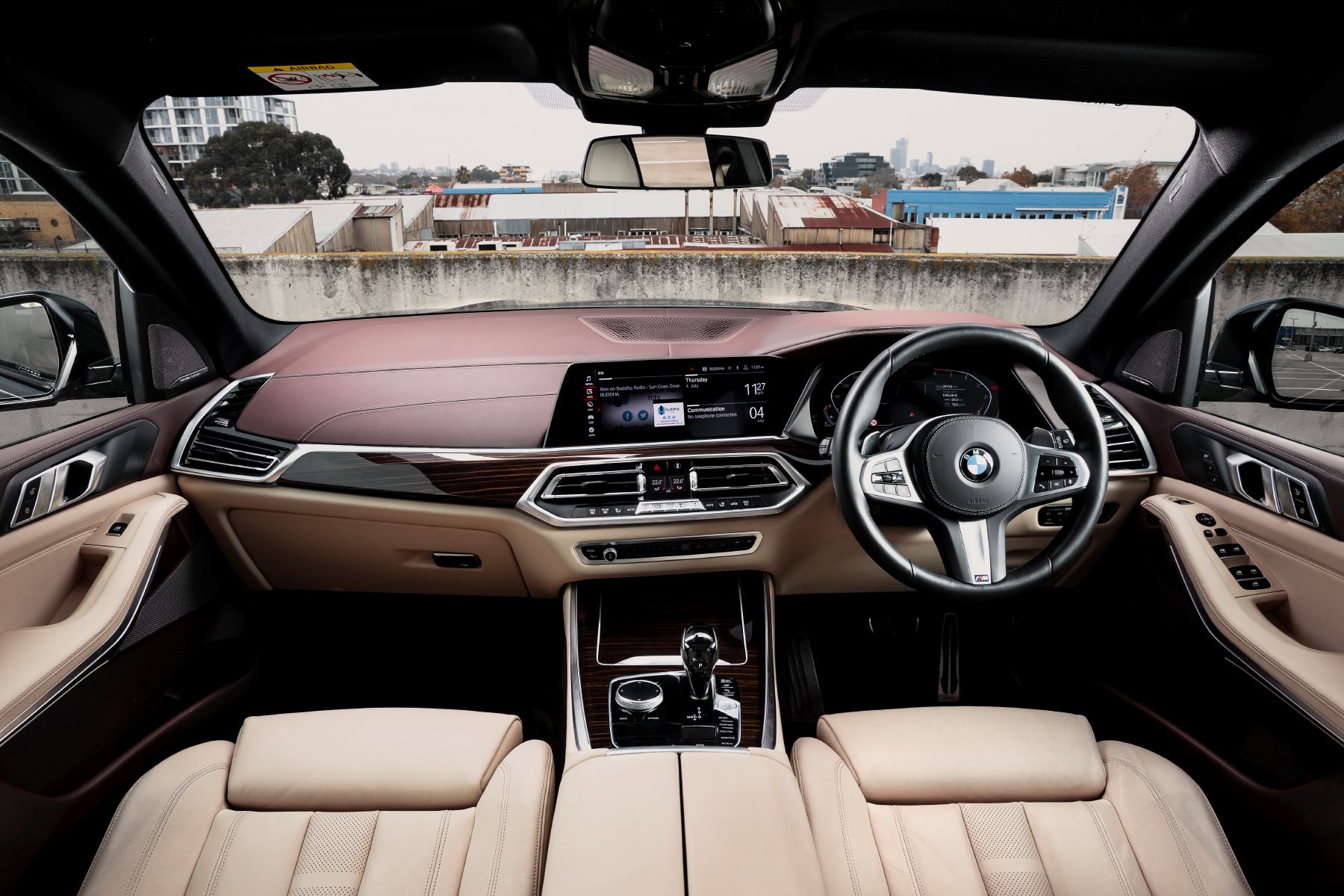 Wow, what an opulent cabin. Lashings of soft leather and lovely woodgrain trims abound inside the X5 and it feels like a million bucks. Unfortunately for penny pinchers, the loveliness of this cabin comes at an $8900 premium; the wireless charging pad alone costs $900, and Apple CarPlay can only be activated via a $179 yearly subscription, while Android phone users miss out completely. Shamefully, both are services that have become standard expectations (without the yearly subscription) in this segment. The twin digital screens (one for the driver, one for the central infotainment) look lovely and come loaded with some very snazzy graphics and software. 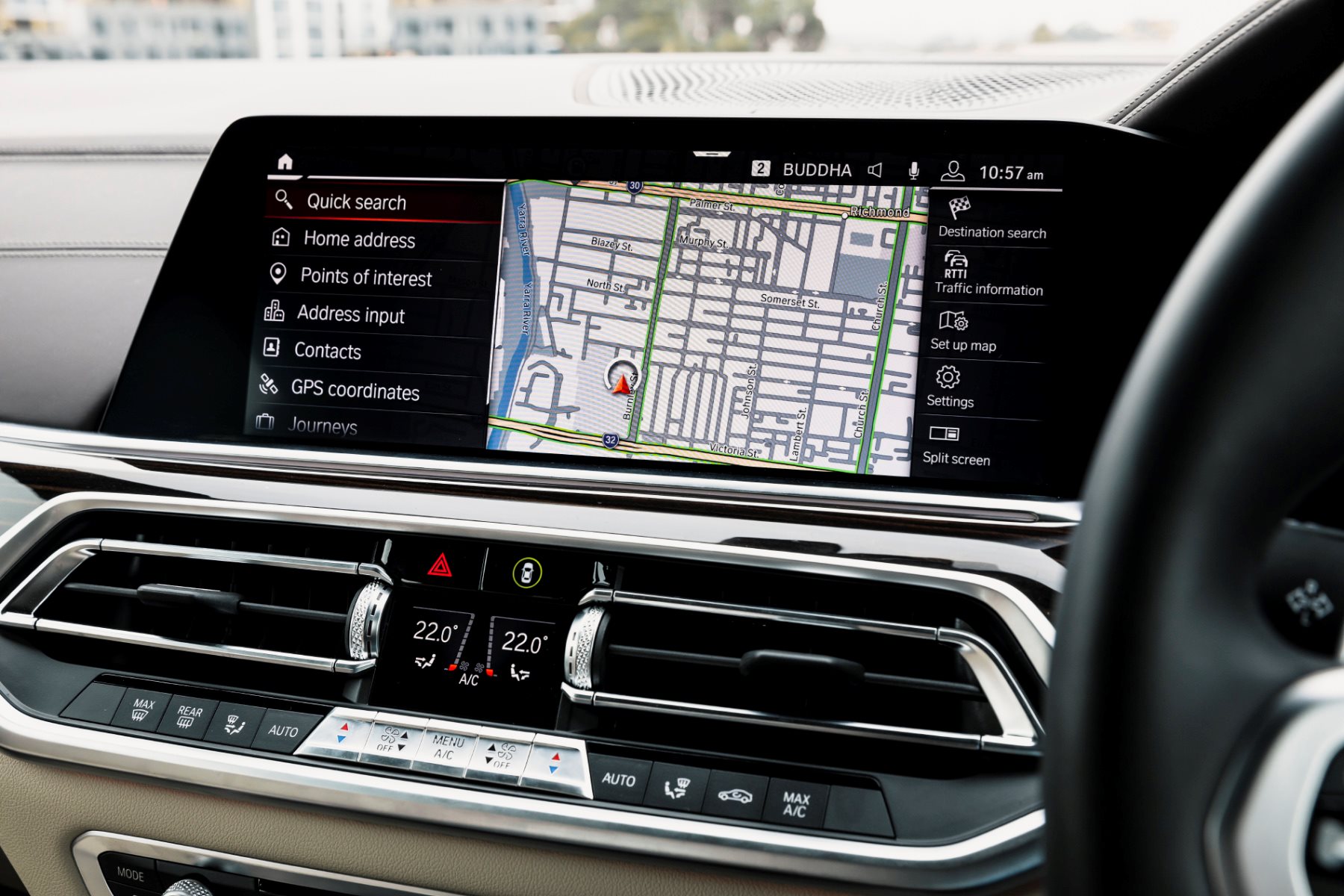 But there are further highlights for those after a well-furnished interior, with the cost-option harman/kardon sound system a strong performer and the four-zone climate control a boon for rear-seat passengers. Incredibly, though, there aren’t seat heaters.

Room in the back is good, but not segment busting, as the front seat backs come close to adult knees. Further back, the 645L boot is as capacious as it reads on spec, with a massive opening to take in a pram and a family’s luggage.

It’s hard to throw much shade at the X5 from the standpoint of being a comfortable family cruiser on first impression. The cabin meets luxury expectations, while the quality and materials is what you should expect at this price point. But once you get moving it’s not quite as plush, with a busy ride underneath that’s too apparent on the wrong road. There is optional two-axle air suspension available which might tidy that up, or perhaps you’d not opt for the huge rims underneath. The latter would be the smart choice, as you’d make twice the saving, leaving the wallet open for the extras that make this pricey test unit such a nice cabin to sit in. But there’s no question about the drivetrain, which is a terrific unit. 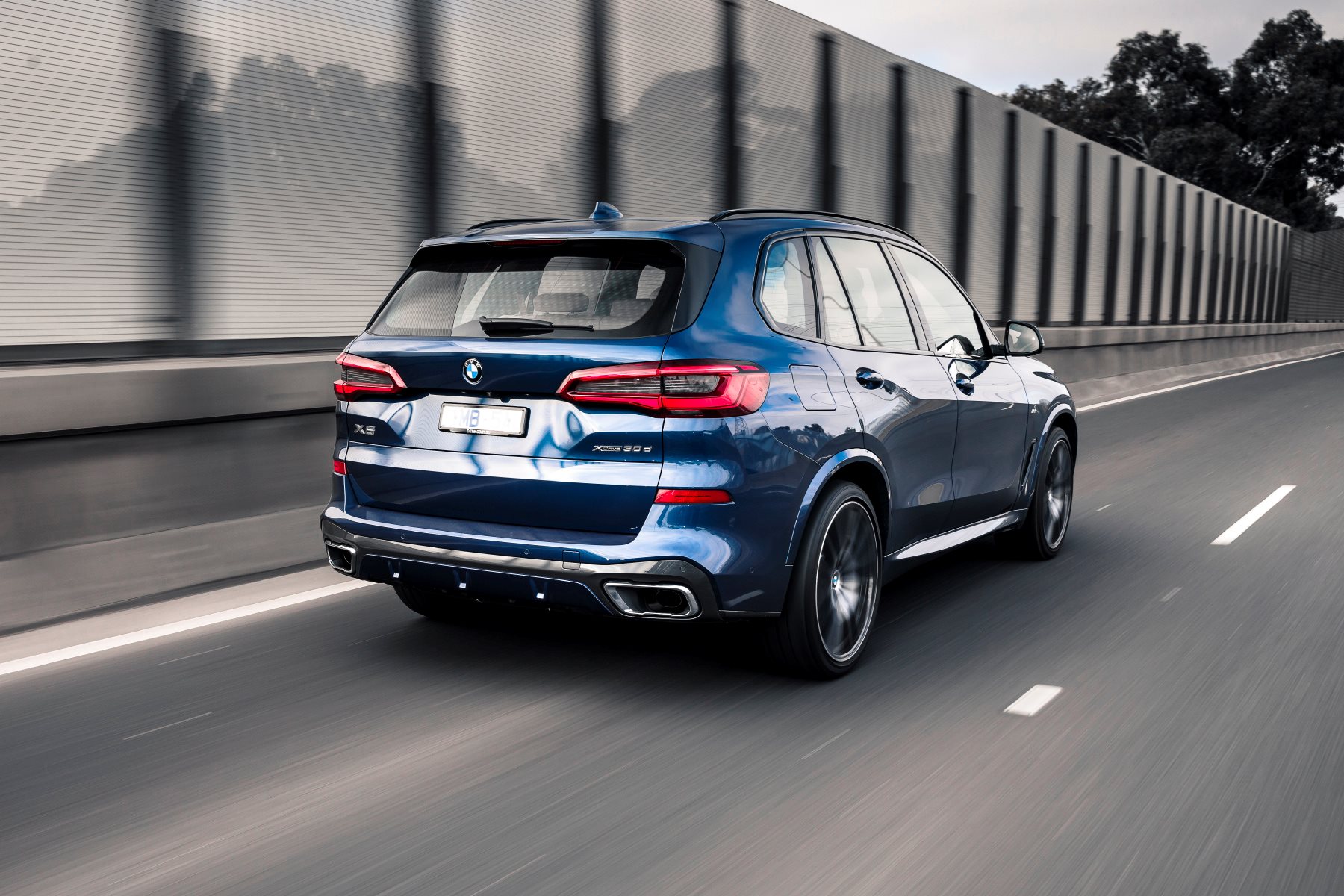 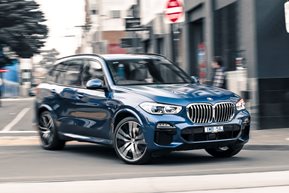