I had always imagined the 275 Trophy-R was the high point of the really hot Renault Mégane model series. I’m not sure why, but I remembered it as the high watermark. With its coupe-ish appearance and rock-rigid body, it seemed as modern as today’s Megane, but with less than 300 horsepower, it retained the delicacy of old hot hatchbacks.

It’s also the only one I drove at the Nürburgring, the track that has made this series of special Renault Sport Méganes famous, because each of the trio set a new lap record for a front-driven production car. That’s not any guarantee of greatness, of course, but it helped here, and I always felt that the 275 Trophy-R was the standout among a series of standout cars.

Today, though, will tell. We have the three cars in the series together in the same place at the same time. It’s a sequence that started in 2008 with a car called the R26R, or R26.R in Renault-speak of the sort that led to the Kia cee’d becoming the Ceed by the time it had passed via sensible sub-editors. 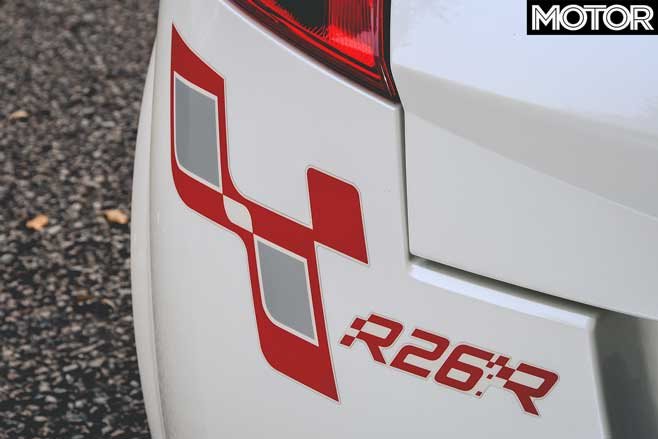 There had been hot Renaults before the R26R. The most bonkers Clio ever had a V6 installed in its middle – the ‘three-litre Clio’ – and even before that, there were Group B rally-homologated mid-engined Renault 5 specials. But the R26R had a different kind of competition mind and went about succeeding at it in a different way.

Renault wanted the Mégane to become the fastest front-wheel drive production car around the Nordschleife – a feat that, remember, doesn’t necessarily make for a great driver’s car – so set about throwing out 123kg from an already light hatchback, including ditching the rear seats and swapping the rear window and tailgate glass for plastic. Thus equipped and riding on optional Toyo track tyres, Renault’s tame test driver, Vincent Bayle, took the R26R around the Green Hell in just 8min 17sec. 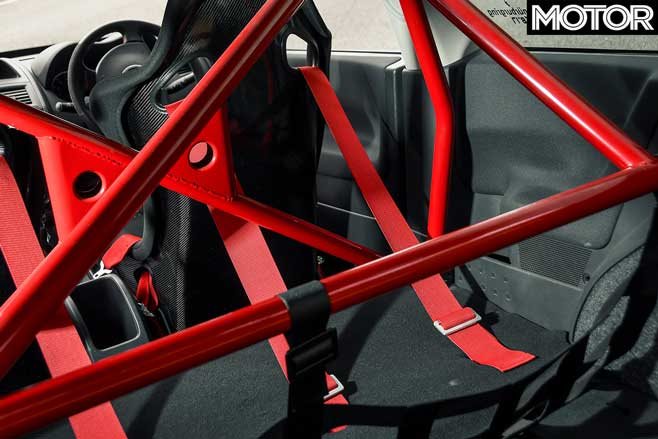 There were quite a few production examples of this car built at the old (and new) Alpine factory in Dieppe: 450, none of which came here. Renault UK was quite bullish about the prospects of selling them in Britain, opting to take 230.

It didn’t quite pan out like that. As with the earlier, if anything more special, Ford Racing Puma, the market baulked at the £23,815 (plus another £3000 for the track tyres, roll-cage and titanium exhaust that no R26R should be without) asked for a two-seat Renault – more than $50K in Oz money – so some of the allocation made its way onto Renault’s internal car scheme on favourable rates, while other examples were sold back in France.

Used values, at one point, dropped to half their price when new. Sigh. Yes, we probably should have. Now they will cost what they did when they were new, but even at that price, as when new, I think they’re worth every penny. To drive one today is to still find a hugely enjoyable hot hatch. Or perhaps ‘small coupe’ would do it more justice. 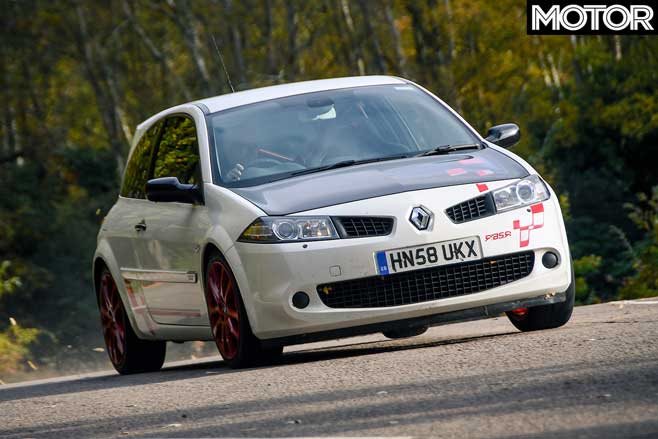 With the R26R, Renault set out (and this is a theme it continues) to do more with less. So the 169kW turbocharged 2.0-litre four-cylinder engine and six-speed manual gearbox came in unchanged from the standard Renault Sport Mégane, which was called the R26.

Acceleration increased (0-100km/h fell by half a second to 6.0sec) as a result of the weight loss, but the lap time came from extra poise, grip and braking.

Some old cars, even future classics, start to feel a bit tired as their bodies fatigue and their suspension bushes soften, but this evidently well looked-after R26R feels impeccably tight. So although the steering wheel is thin-rimmed and slow-geared by today’s standards, it’s still exceptionally precise and controls a chassis that generates brilliant grip and poise. 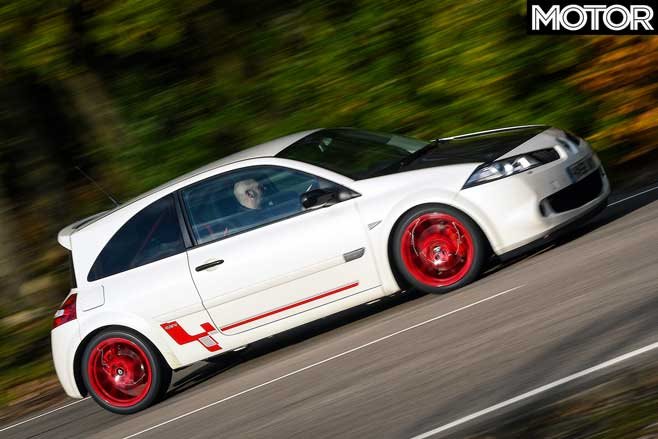 At a test track, it hangs on gamely and resists understeer, including under power, feeding back plenty of splendid road feel while it’s at it. That keen line is partly possible because it makes less power and torque (at 309Nm) than a truly modern hot hatch. But it also has an ability to damp road lumps, owing to 10 per cent softer springs than the standard R26 (lightness keeps on giving, as Renault recently demonstrated once again so deftly with the Alpine A110), while there’s a lovely throttle adjustability that subtly and predictably brings the rear wheels into play in faster cornering.

It’s three generations old, this car, but it feels every inch as rigid and competent now as I remember it was at the time.

That time, though, wasn’t quite so long ago, really. Renault used to launch its super-special version just as time was running out for the model that spawned it, so the R26R set its fast lap and failed to find buyers as recently as 2008 – the same year the Mk3 Mégane was launched. 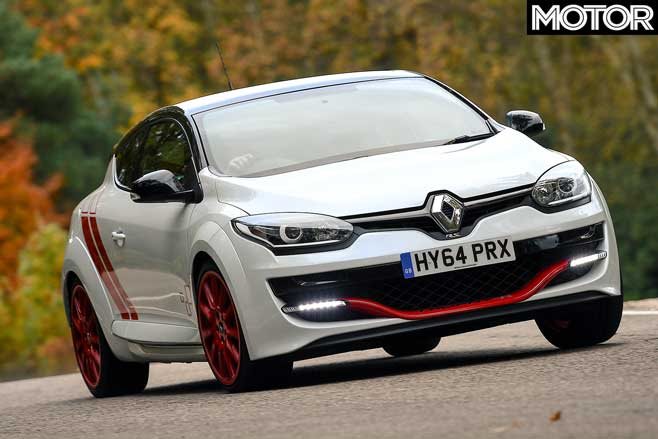 It took until 2015 for the German Ring Road Special edition of that variant to find its way onto the street in the form of the 275 Trophy-R. More than 80kg was removed from the standard 275’s kerb weight, but the measures weren’t quite so extreme as the first-time 101kg (maybe through fear that market forces would again shun it), so while there were no back seats, there were still glass windows and a strut-brace rather than a half roll-cage. And that meant you could tell your other half you were buying a small van.

The price went up to $67,490 driveaway, and Australia was allocated a generous 50 of the 250 production run (whereas the UK had to make do with just 30, perhaps because of the earlier over-order). The Nürburgring lap time, set by Laurent Hurgon, dropped to 7min 54.3sec.

I remember loving it dearly at the time, and while it’s no less impressive today, trying it and the R26R back to back reveals that they’re not night-and-day different in class in the way I had remembered. I thought I remembered the steering of the R26R being vaguer, but while it’s true that the 275 Trophy-R has a weightier, much quicker and more responsive rack, it’s actually no more accurate than its predecessor’s. 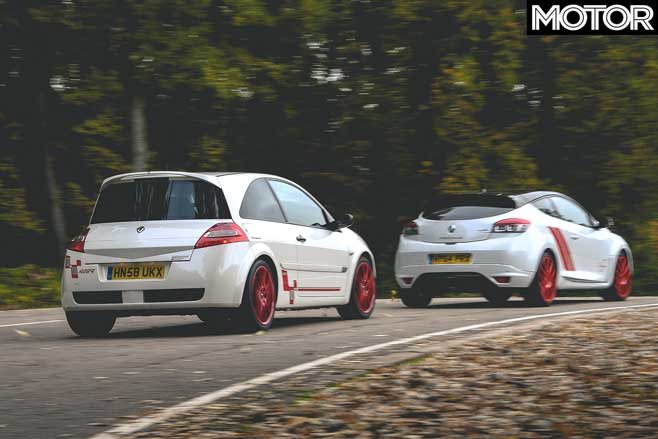 What it does simultaneously do is feel wider, heavier, taller of scuttle and firmer. A lot firmer. Quicker in a straight line too – unsurprisingly, given the 33kW power increase that came with it. But more noteworthy still is the on-or-off nature of the handling; you turn at a corner and the 275 Trophy-R really dives to the apex. Do the same with the throttle off, or if chance allows with the brakes trailed, and the rear wheels are exceptionally but predictably and controllably mobile. While the R26R is relatively delicate and mild-mannered, the 275 Trophy-R is much more brutish and physical.

To that end, it’s not unlike the cars in another test I did featuring a decade-old car: a Porsche 911 GT3 RS from 2010, which lined up alongside a recent 911 GT2 RS. There, as here, the newer car felt all of more rigid, heavier and larger and yet simultaneously more responsive, grippy and accelerative – if not necessarily any more enjoyable.

The 275 Trophy-R isn’t the same as a GT2 RS, obviously; there’s the small matter of 317kW between them. But there are similarities between the ultimate Renault Sport line and GT Porsches. And there’s no denying that, in the same way that the most powerful new car, the GT2 RS, is the most extreme model, the latest Mégane 300 Trophy-R is similarly the most ballistic and hardcore of all the Renaults. 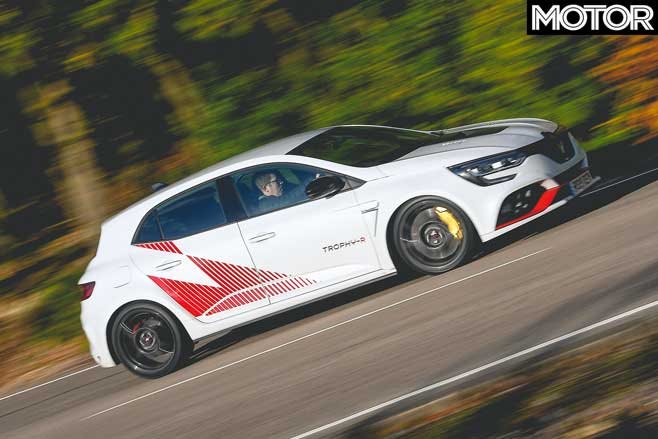 For the 300 Trophy-R’s concept, the same path as with the other two cars here is followed: there are no rear seats, so weight is reduced, and power hasn’t been increased. This time, the big weight loss comes from ditching the active rear steering mechanism that makes the standard 300 Trophy such an unpredictable drive, leaving you wondering just how much it will turn on each steering input and coursing bends like it’s outlining a 20-cent piece.

You would need a lot of those coins to get one, even if the 11 available in Australia weren’t already sold out. I wonder if Renault, buoyed by the relative commercial success of the 275 Trophy-R, has overstepped here. I love the 300 Trophy-R dearly – more than most of my colleagues – and, given the depth of engineering changes, I’m happy to explain away its asking price of $74,990.

Even rarer (just one in Australia) and considerably more expensive is the Record model – same spec as the Nürburgring record-breaking car – which comes with 19-inch carbonfibre wheels, carbon-ceramic brake discs and a straight-feed air intake. I like the regular 300 Trophy-R very much even without them, but nothing other than a back-to-back test on the same road would truly reveal what difference the wheels and brakes make. But the fact is that it won’t go as fast without them. 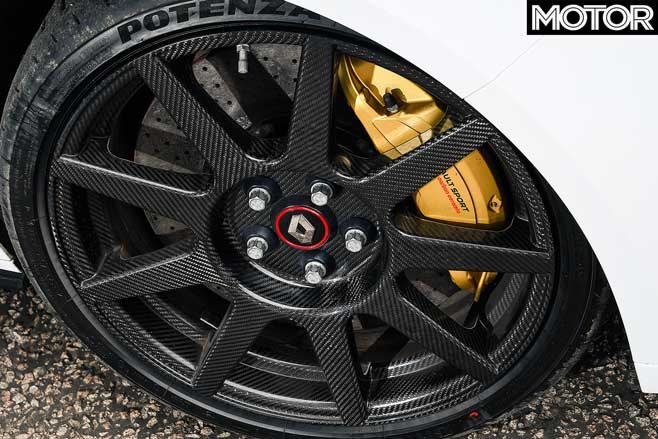 Either way, by gum it’s fast. The lap time has fallen to 7min 45sec, but in a straight line the gulf between the 275 and 300 feels as strong as between the R26R and the 275. It zaps to the redline with such ferocity that it feels like the clutch is slipping, and there’s a real breathiness to it, making more intake noise and less exhaust sound than the 275 – over which it also feels bigger and heavier again.

And, in rather sophisticated style, the 300 is exceptionally agile; if you turn in with no power on, it moves around predictably, quickly and controllably (who needs rear-steer?), with a steering system that, at 2.3 turns between locks, is pretty fast, but somewhat distilled like the rest of the car. It’s a sportscar with more front-end bite than the others, and that lets you lean on it much harder.

The 300 feels softer than the 275, but neither matches the delicacy of the R26R. In this company, that car almost feels an entire class smaller. 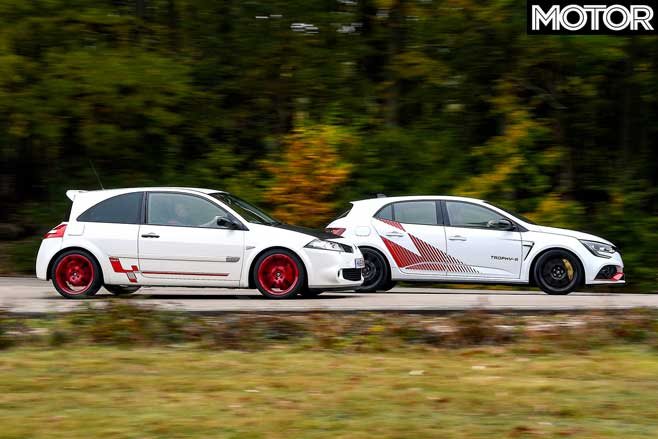 So, while each of the three cars in this series is today still in the category of ‘thoroughly enjoyable and a bit too quick for the road’, there is a fairly natural progression: each is bigger, faster, grippier and yet more responsive to its steering, in the same kind of way that a modern Range Rover leaves a 40-year-old one feeling like a creaky compact car.

Only the R26R isn’t that old. And, coming as it does with fixed-back seats, harnesses and a half roll-cage, it’s just as rigid as it was when it was new, which is still pretty rigid by today’s standards. So yes, there are faster Méganes and more expensive Méganes, but I don’t think there are such immersive, charming and fun Méganes as the original R26R. 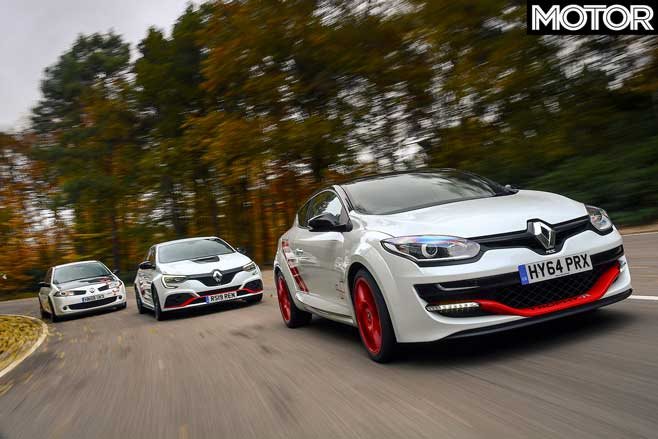 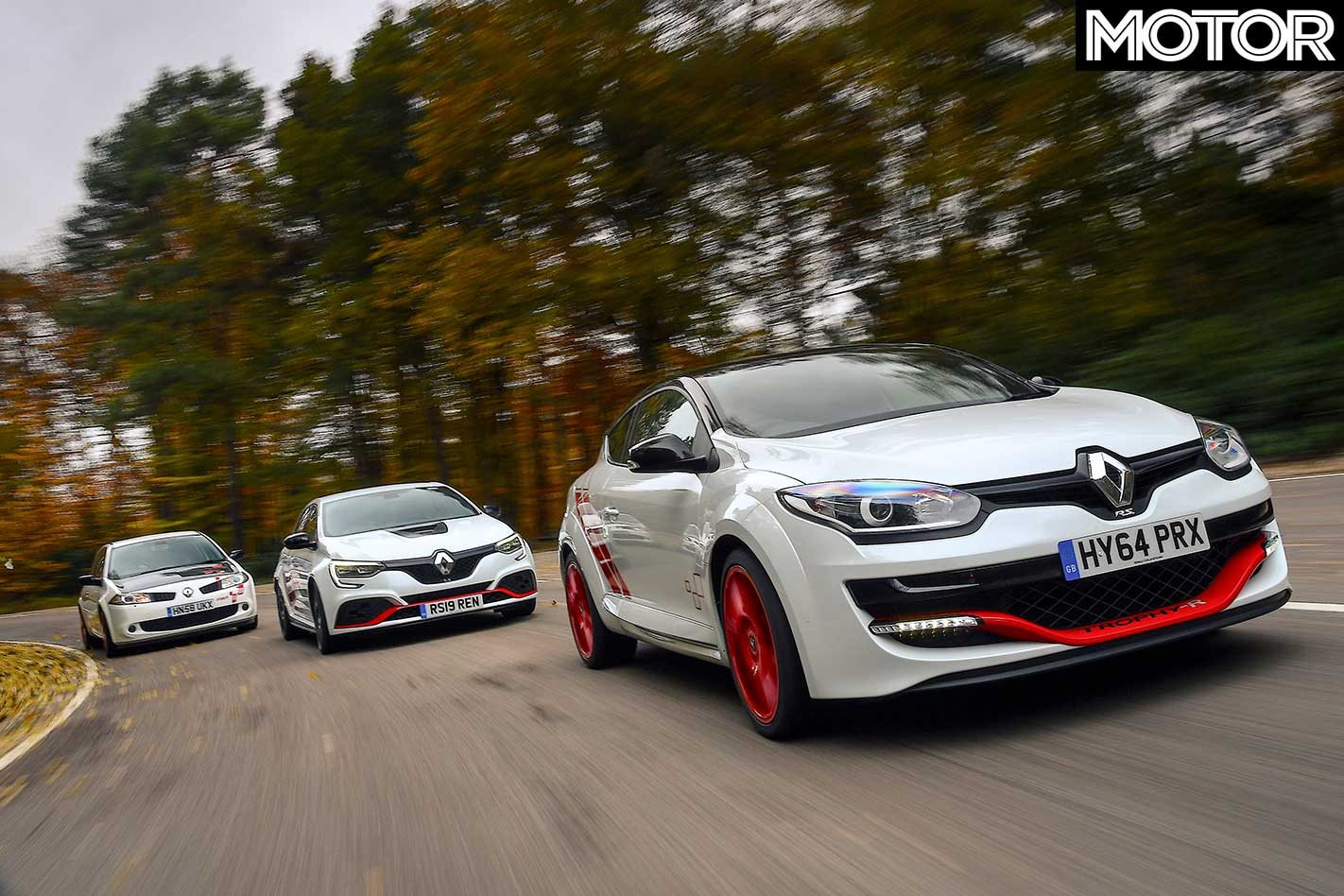 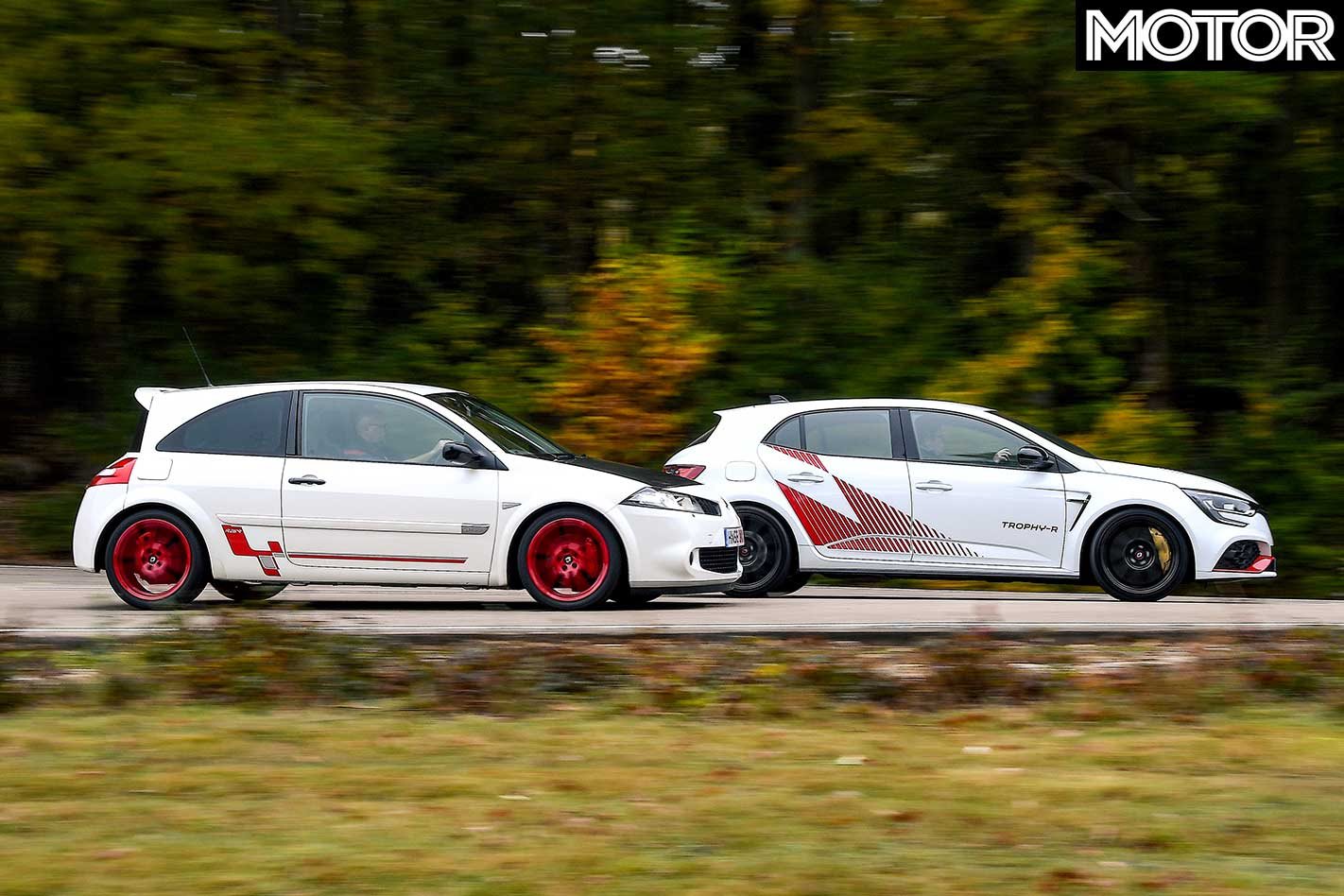 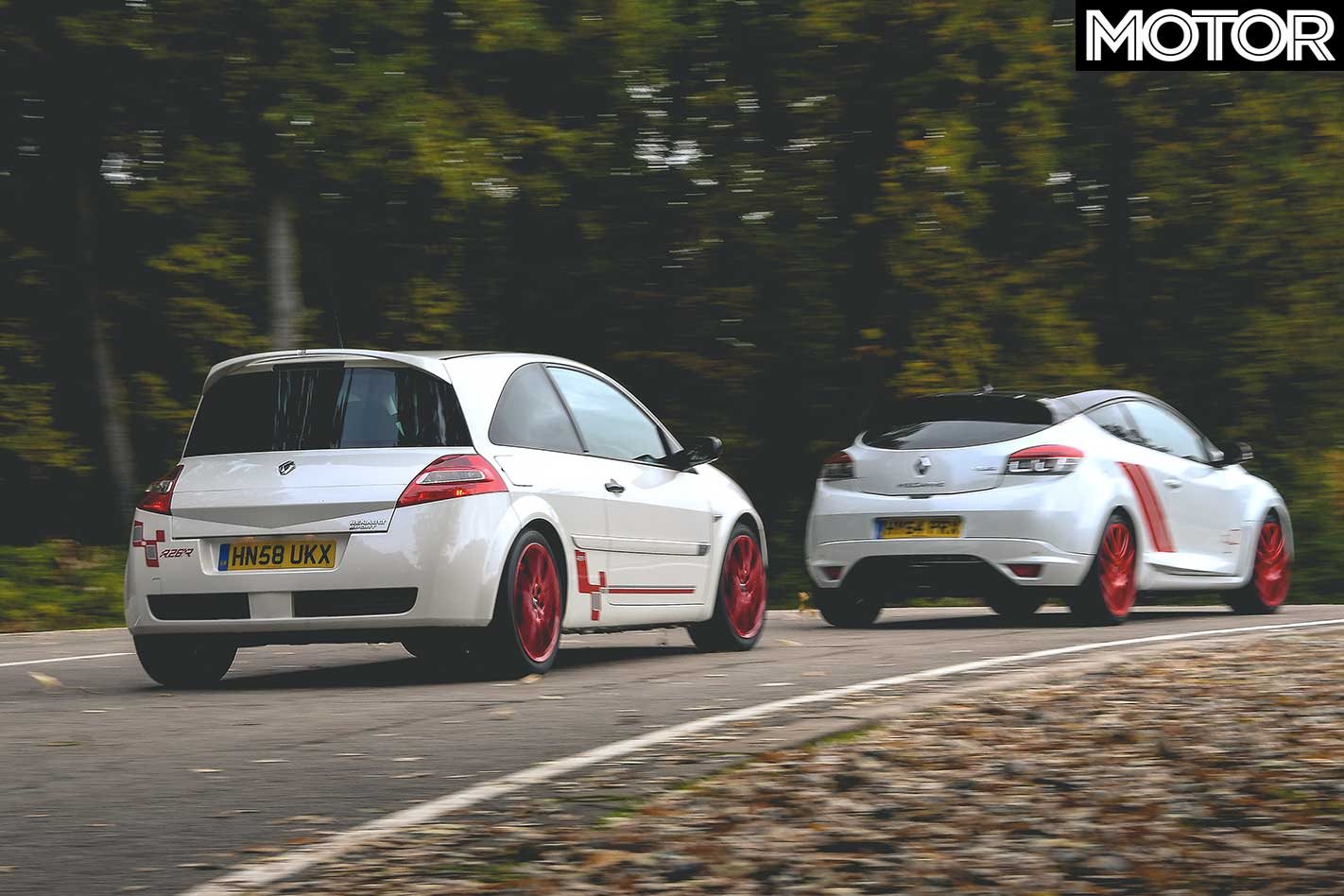 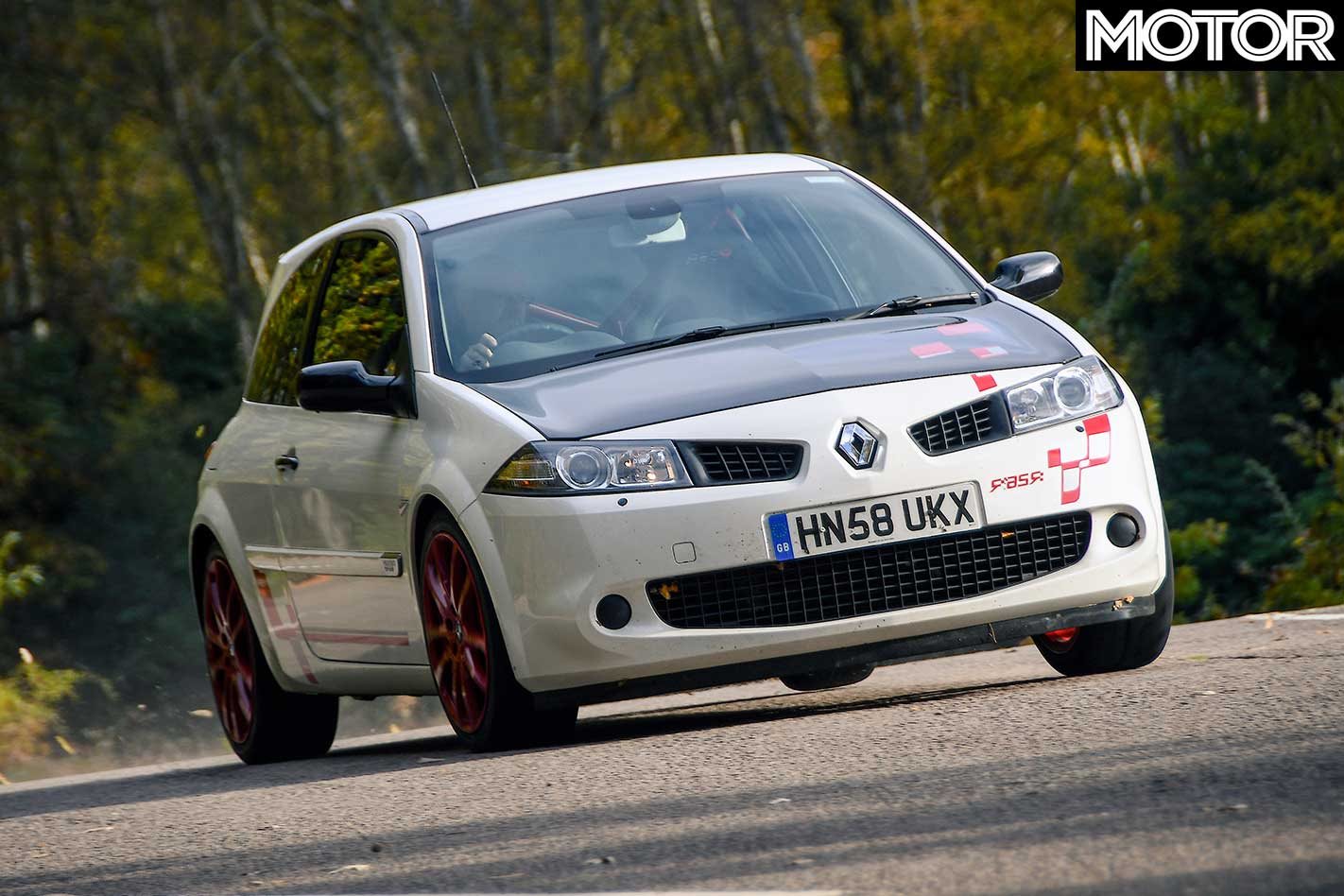 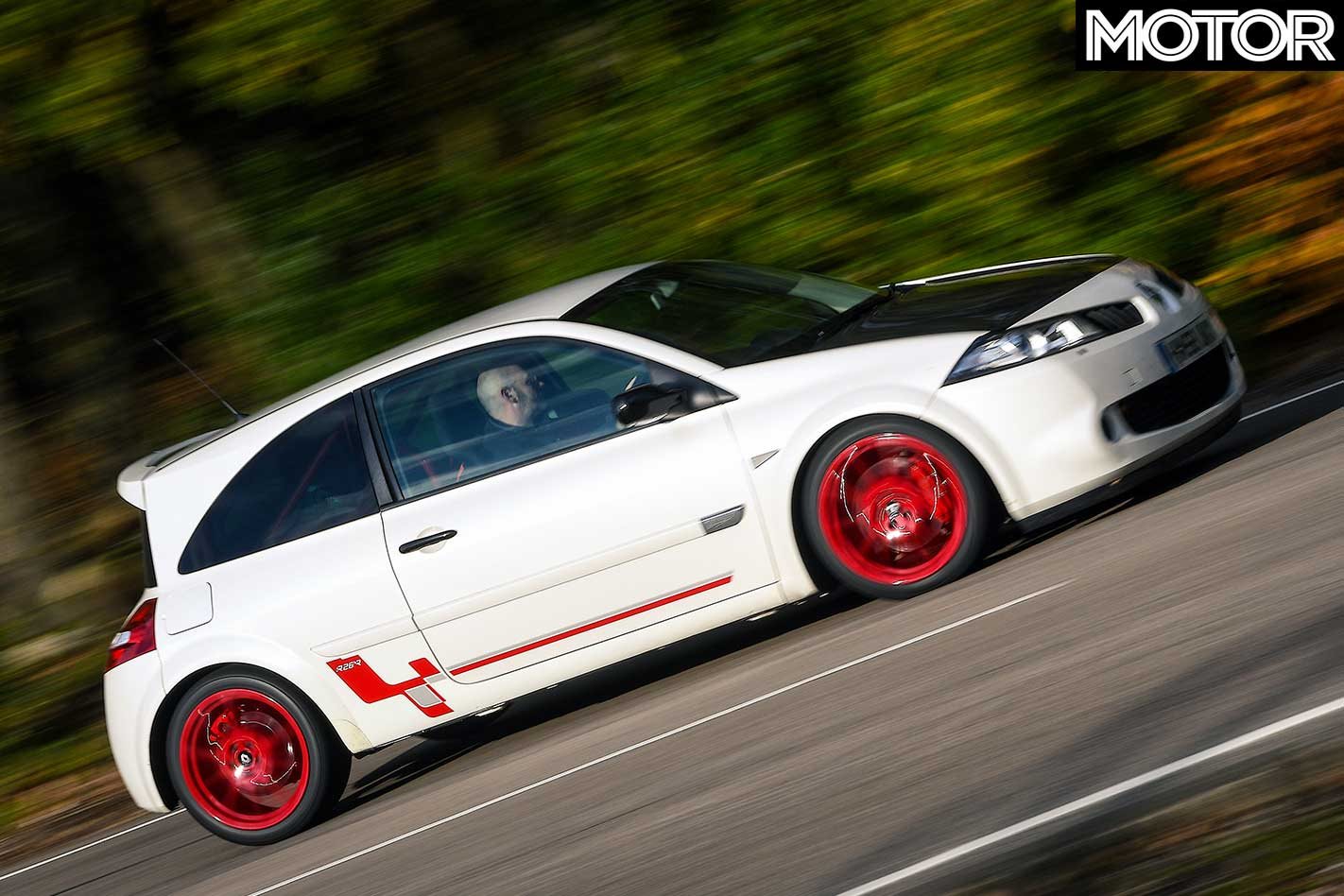 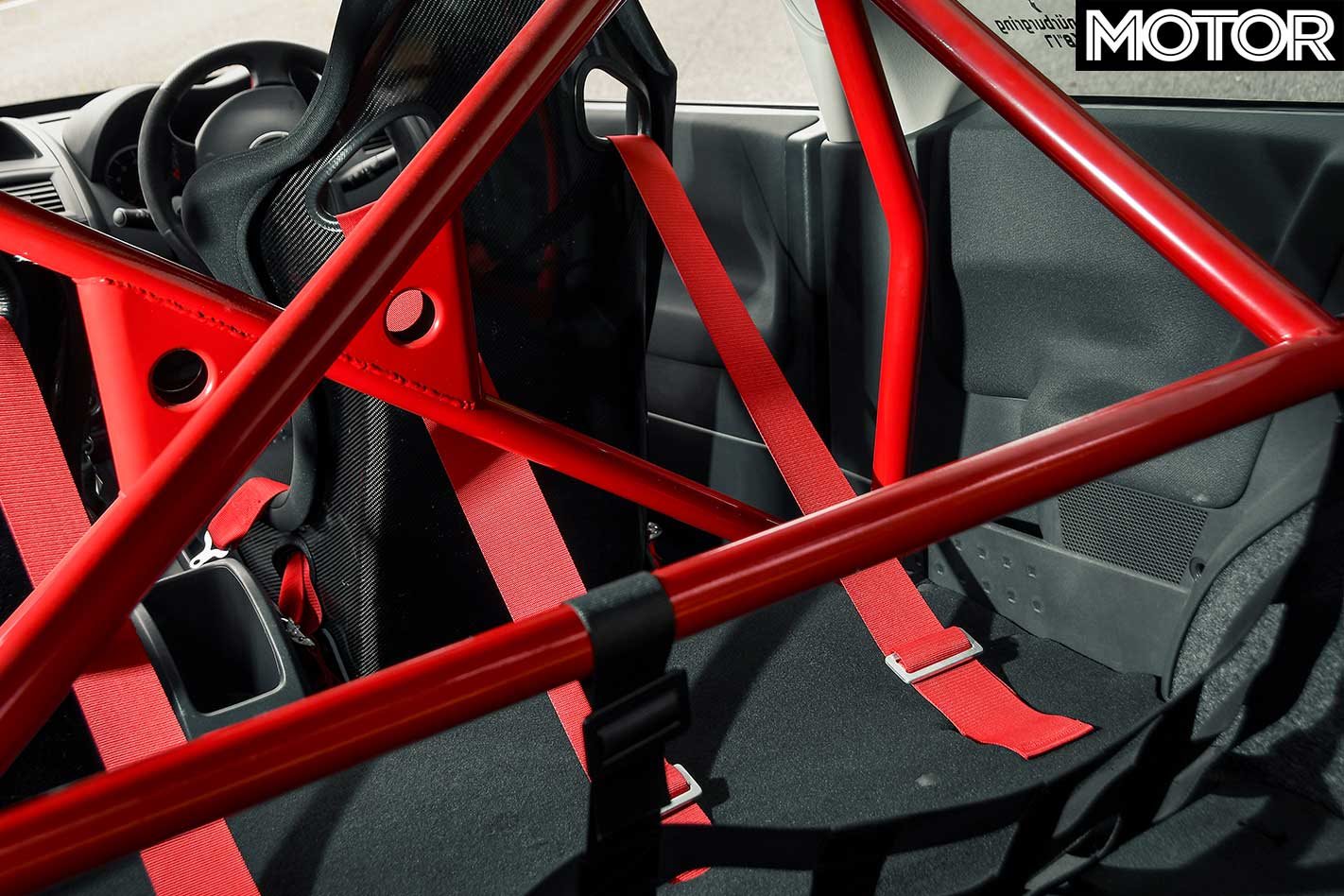 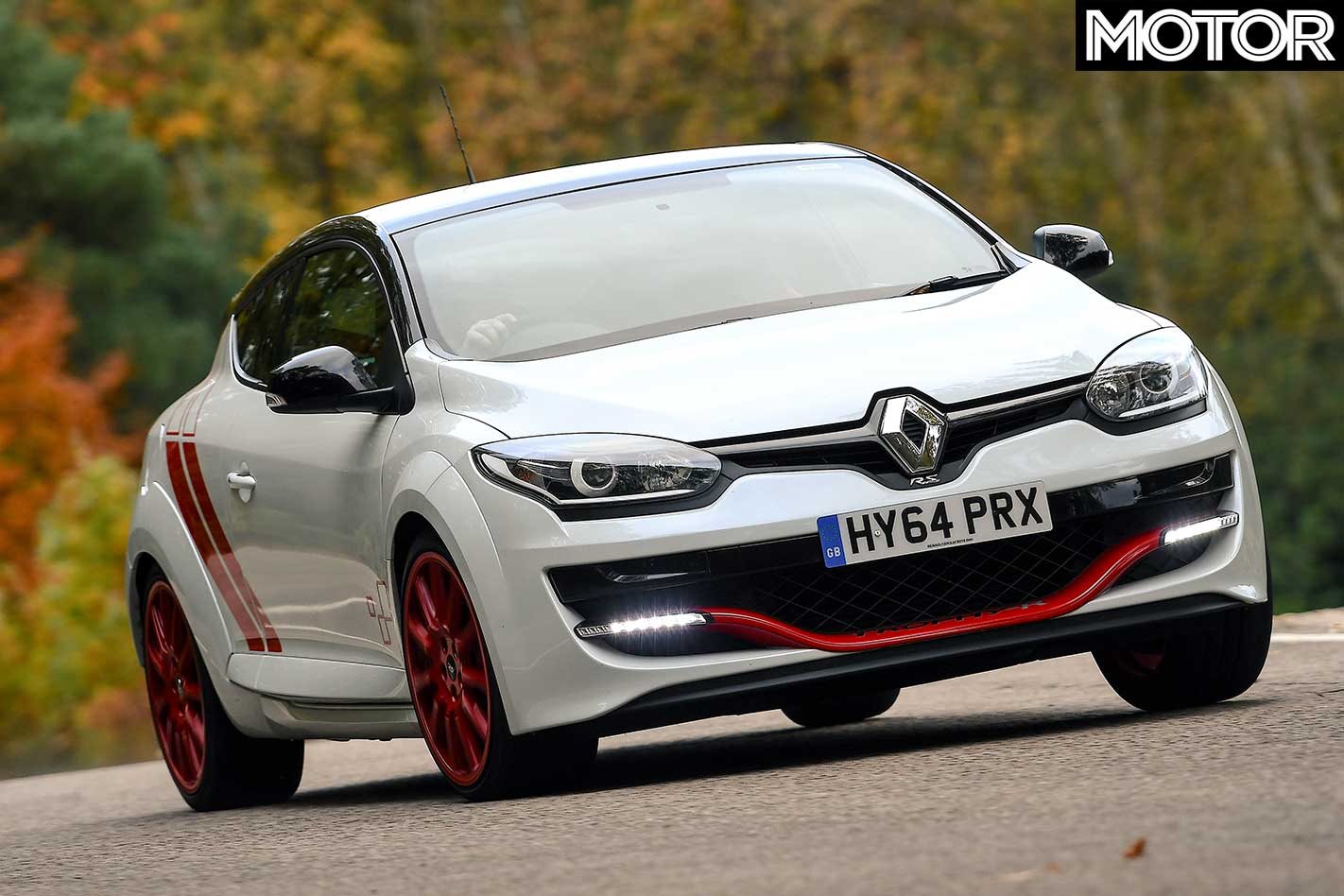 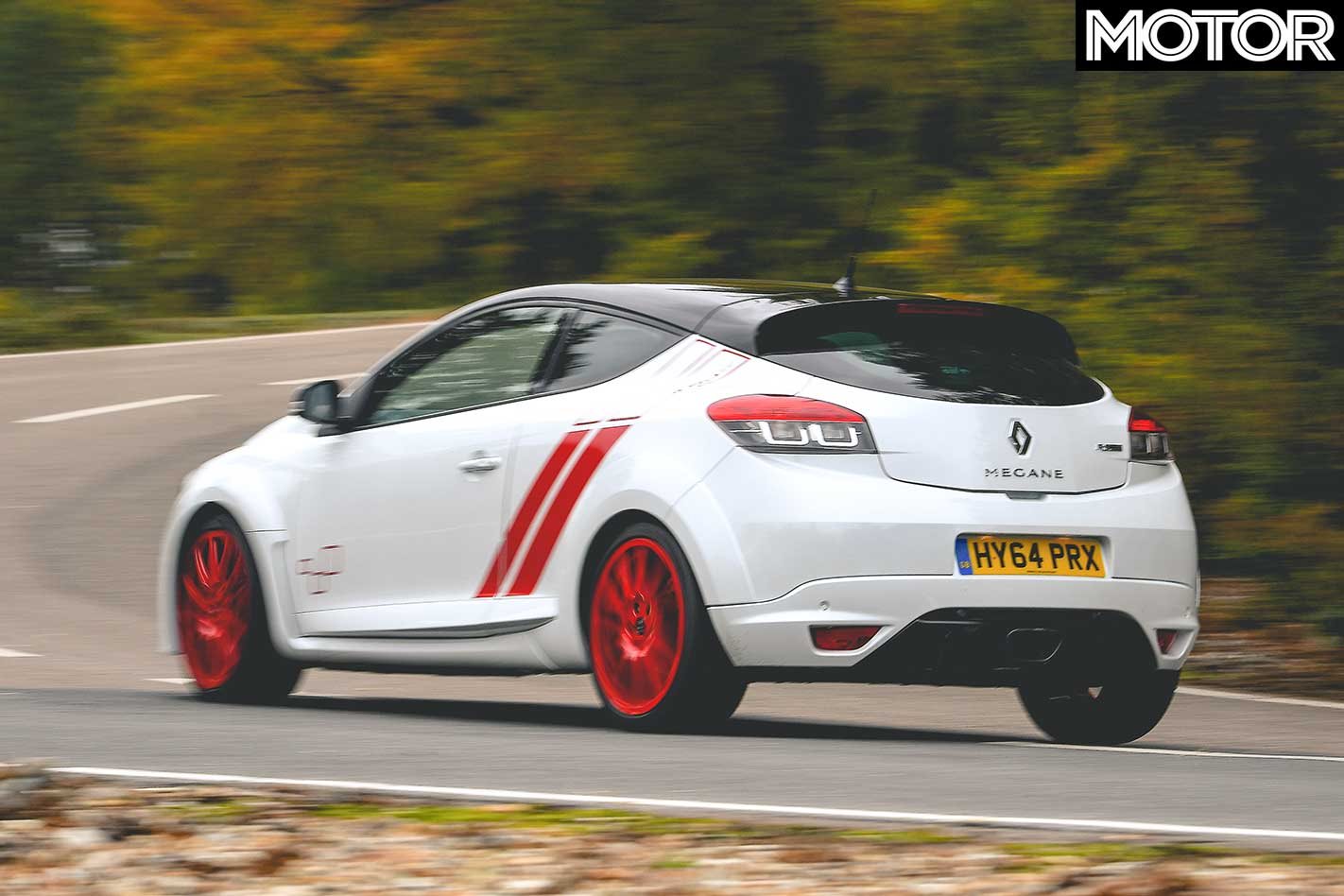 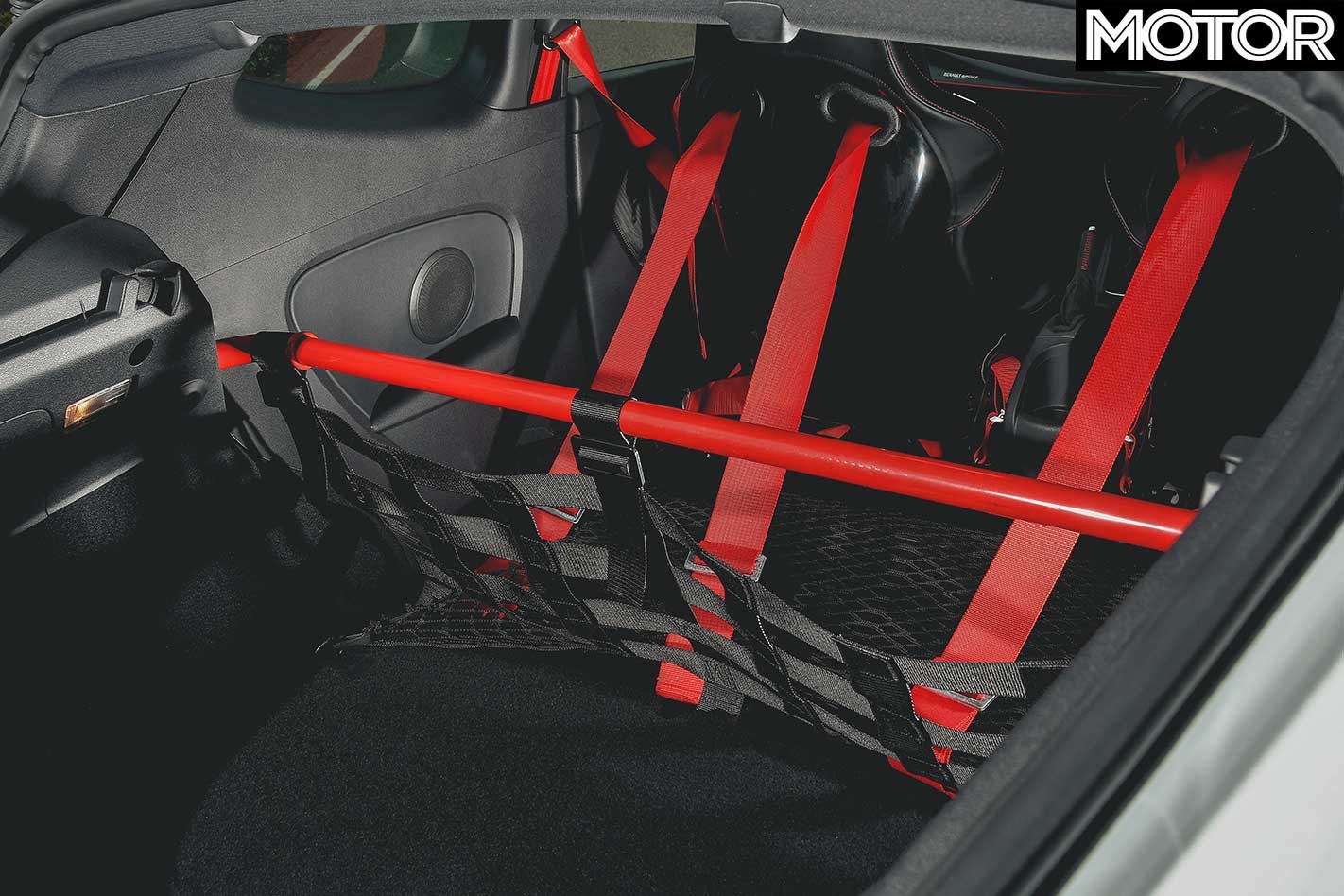 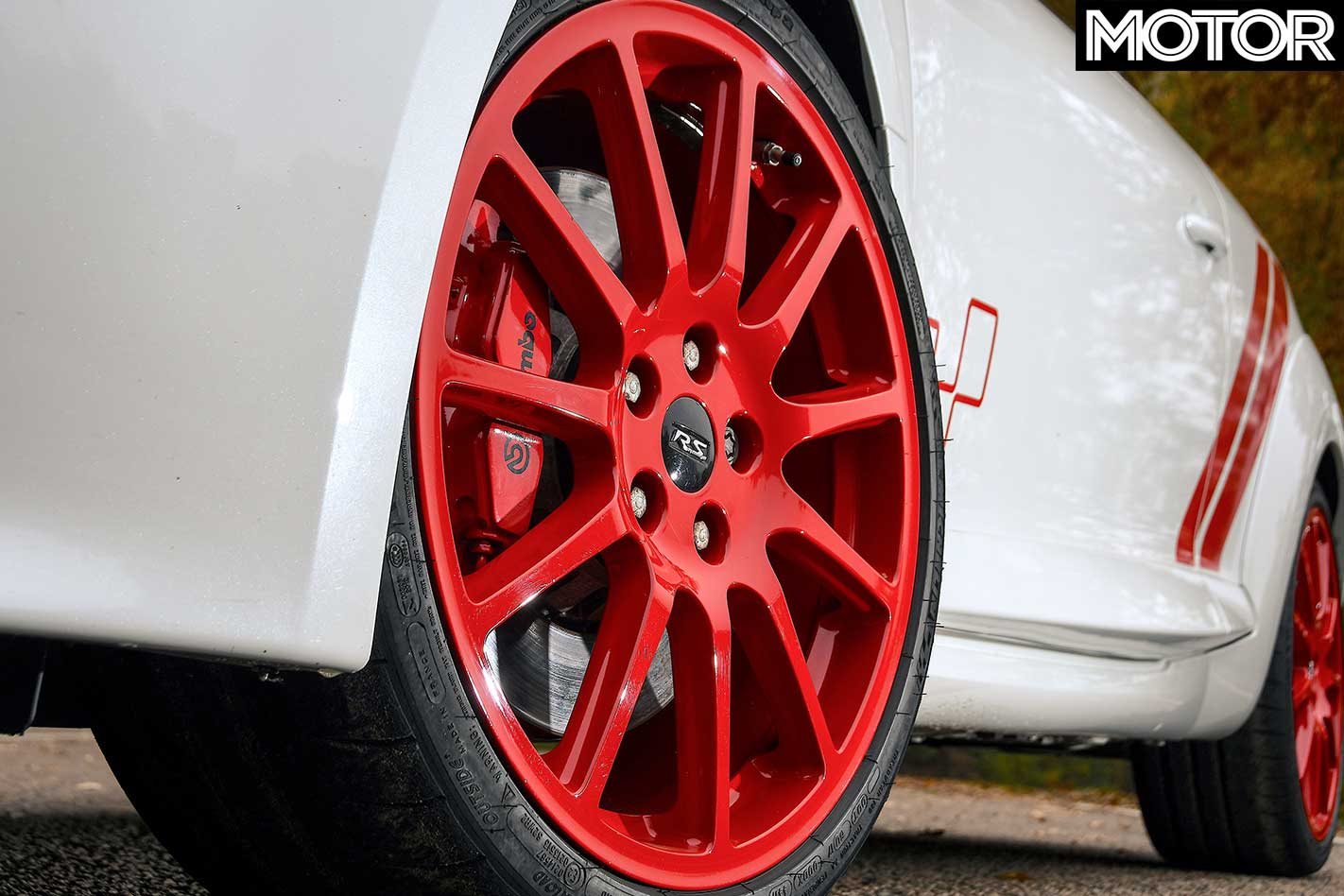 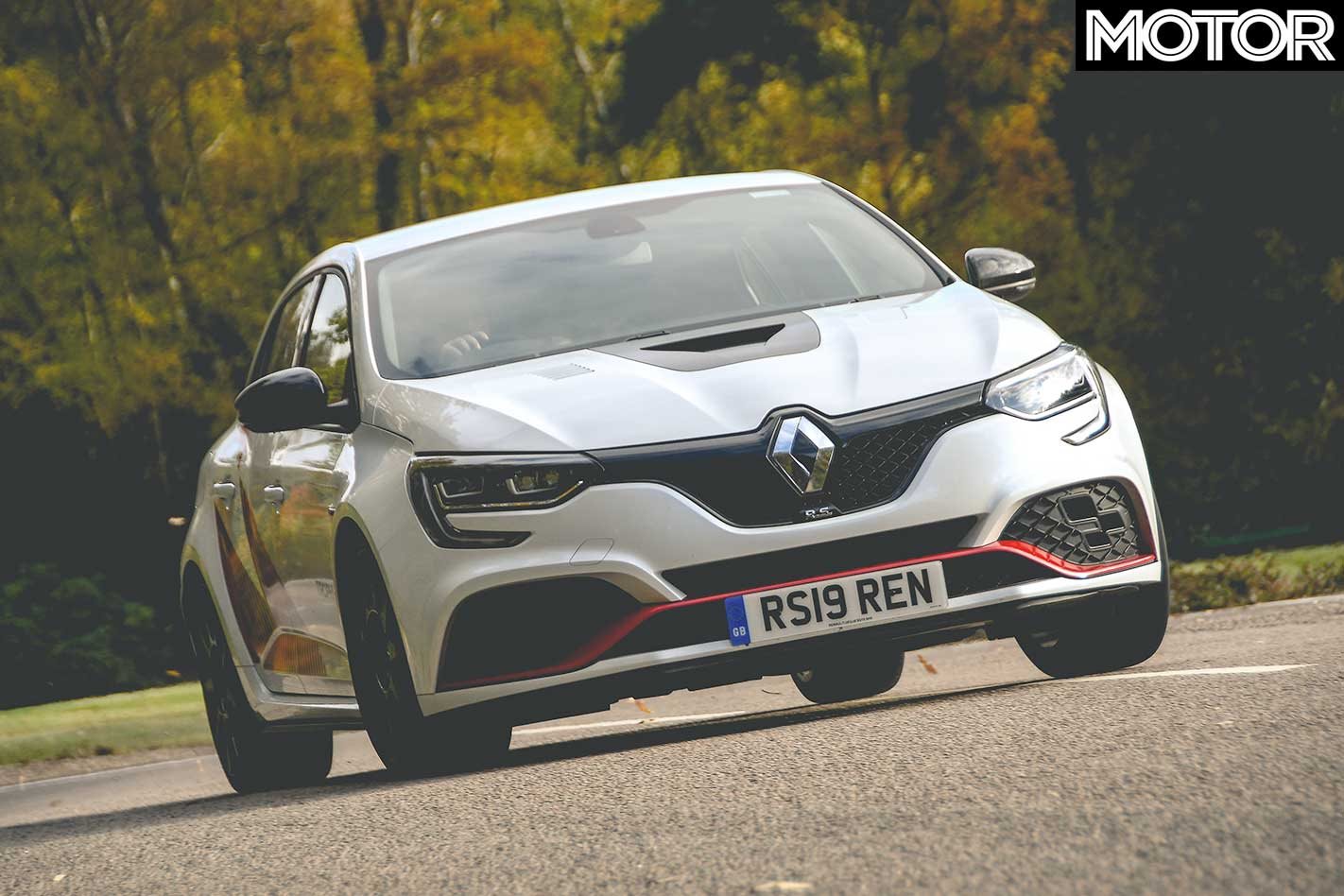 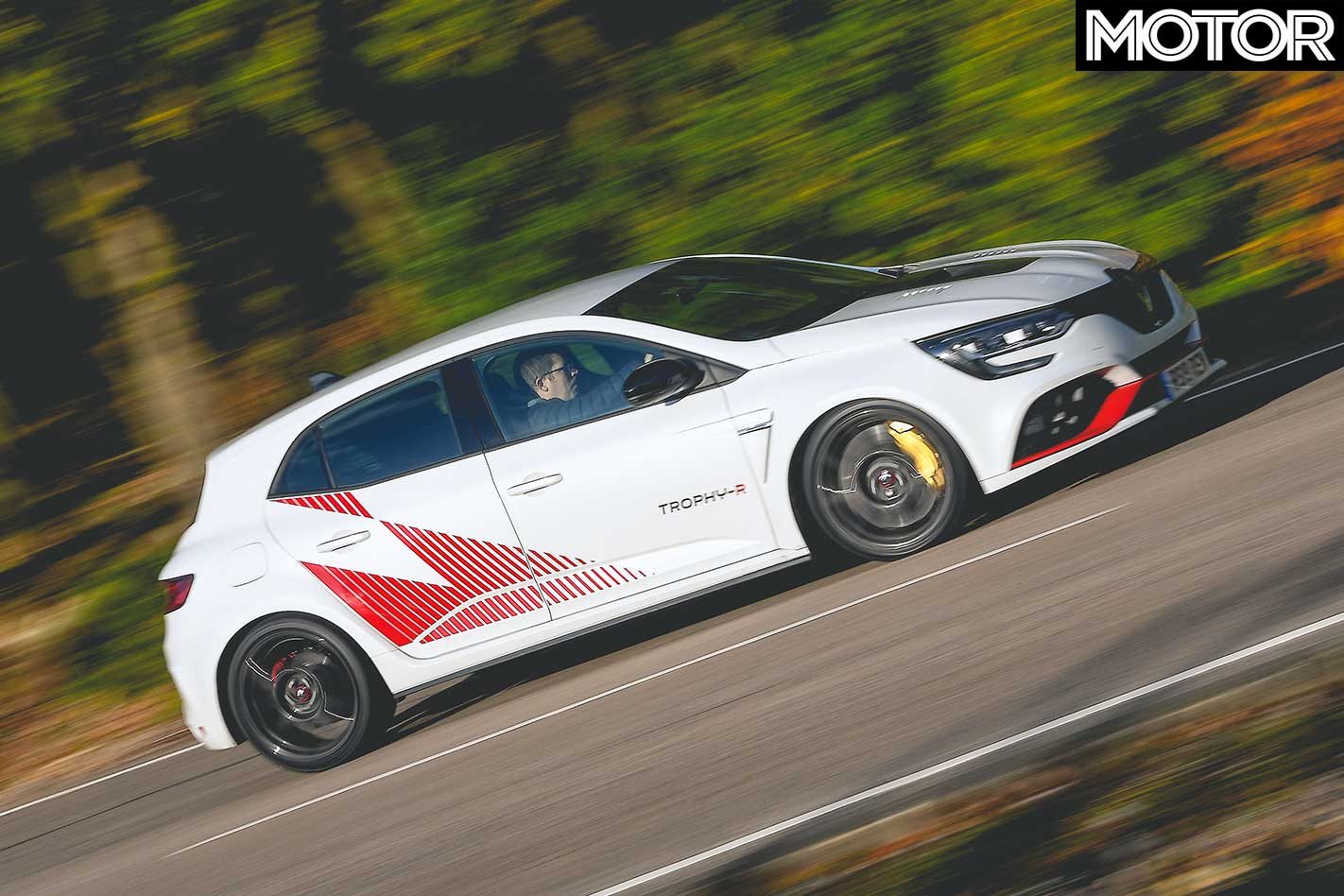 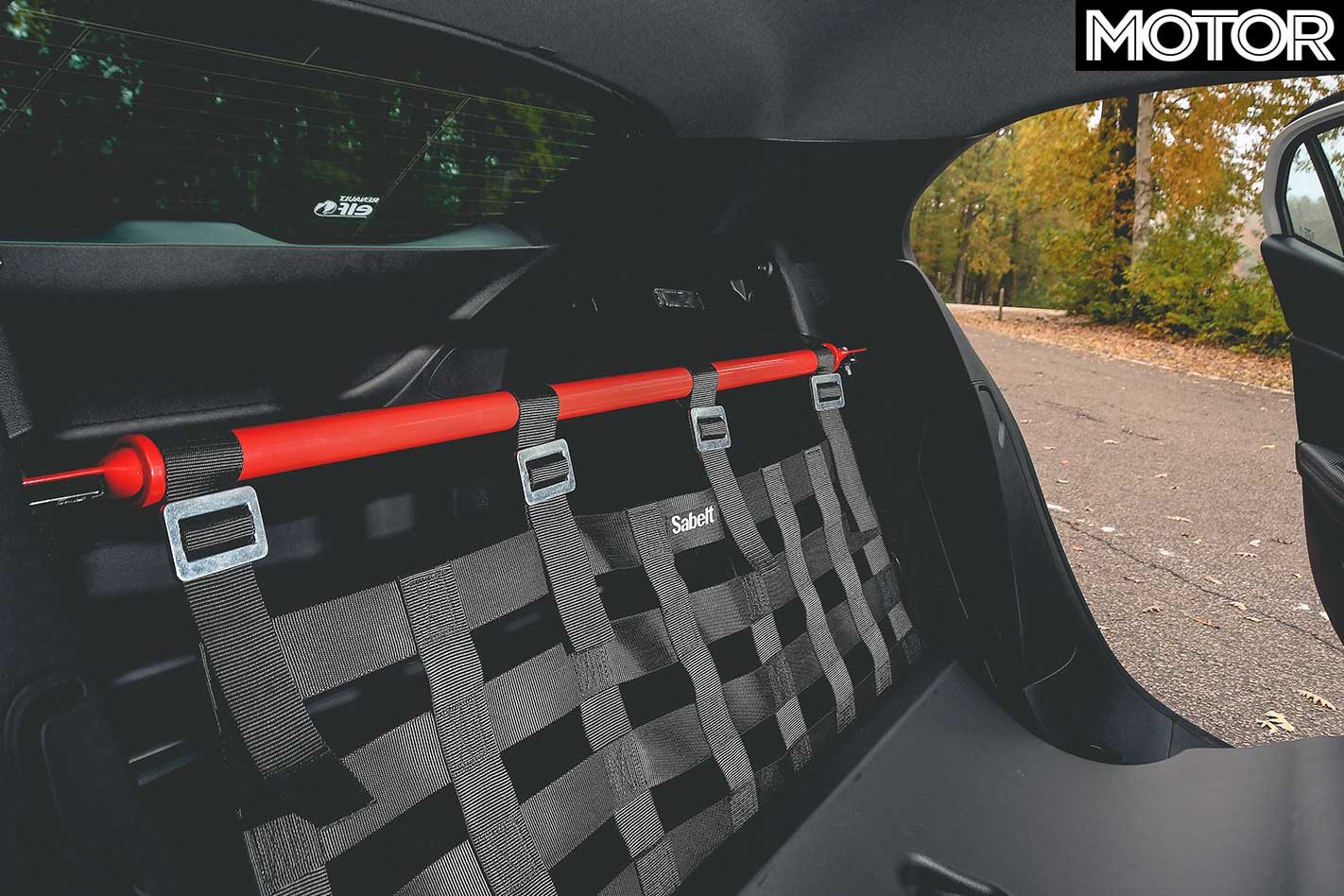 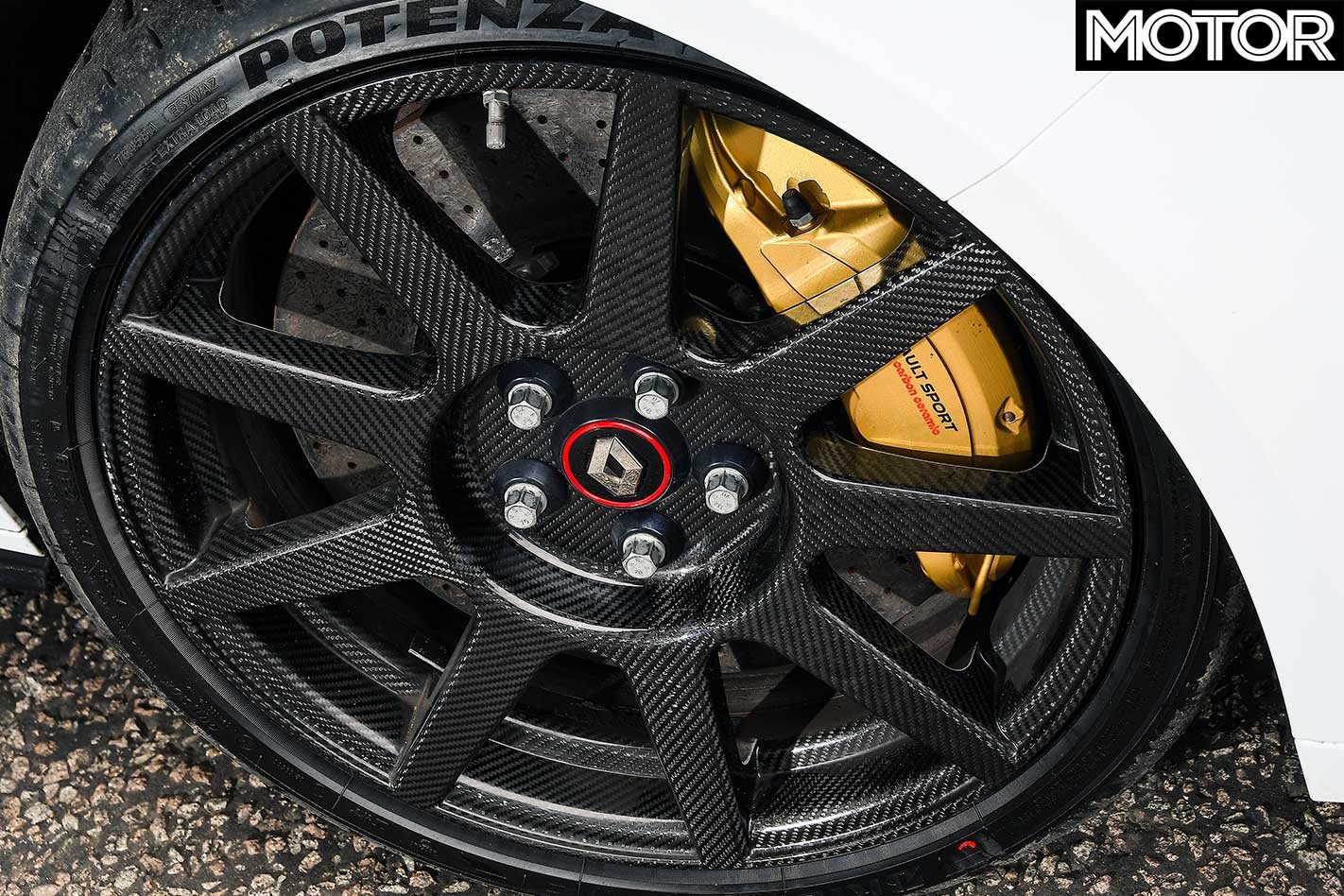