Does the all-new Kia Rio have what it takes to beat one of the benchmarks cars of the light car segment?

THE LIGHT car segment used to be the bargain basement class.

Buying into the category won you a daily driver replete with hard plastics, rudimentary technology and billy-cart handling primarily pitched at value-seeking younger people who supposedly didn’t care too much about driveability – despite the fact they were drivers like everyone else. 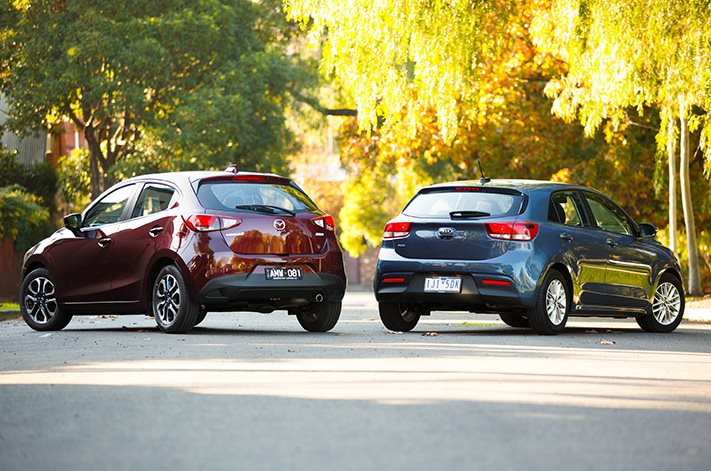 But as infotainment and driver assist technology becomes more mainstream, it’s now possible to get an affordable light car that’s well-equipped, safe and even pleasant to drive.

Mazda was one of the first to provide this, with the current generation Mazda 2 that has steadily improved with a series of evolutionary upgrades since first launching in 2014. So content is Mazda with its baby hatch/sedan that a recent ‘facelift’ offered little by way of aesthetic and performance changes, and instead concentrated on new technology such torque vectoring and automatic emergency braking. 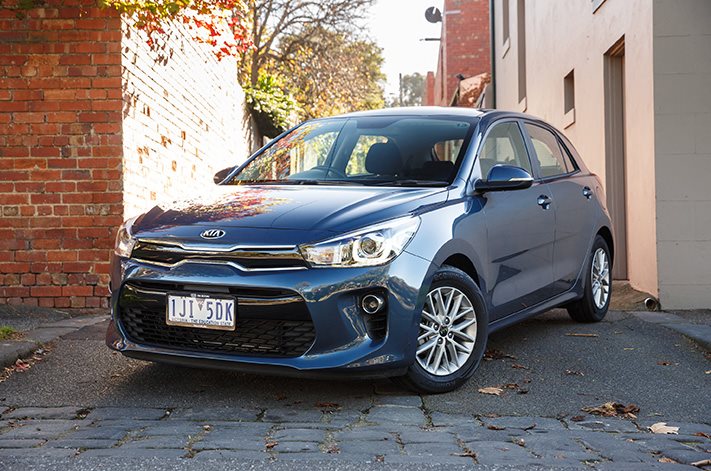 The new Kia Rio, on the other hand, is a very different beast to the third-generation model it replaced. It’s slightly bigger with European-inspired looks, improved ride and handling and higher interior trim levels including the latest in infotainment including Apple CarPlay and Android Auto integration. Add to that Kia’s seven-year warranty and you have car that more than holds its own against big-selling competitors such as the Hyundai Accent and Toyota Yaris.

But how does it stack up against the Mazda 2, which has done enough to be held up as its class benchmark? 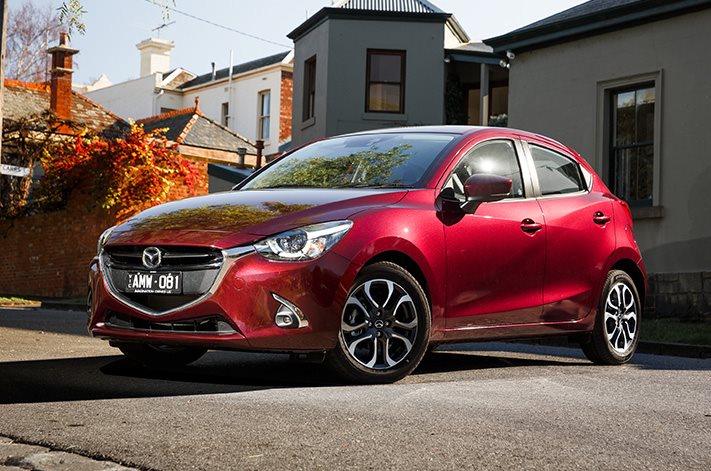 For this head-to-head we chose the mid-level, and arguably best value Kia Rio variant, the 1.4-litre Si, which retails at $21,490 and comes with additional equipment over the entry-level Rio S including cruise control, satellite navigation, digital radio, LED daytime running lights and 15-inch alloy wheels. 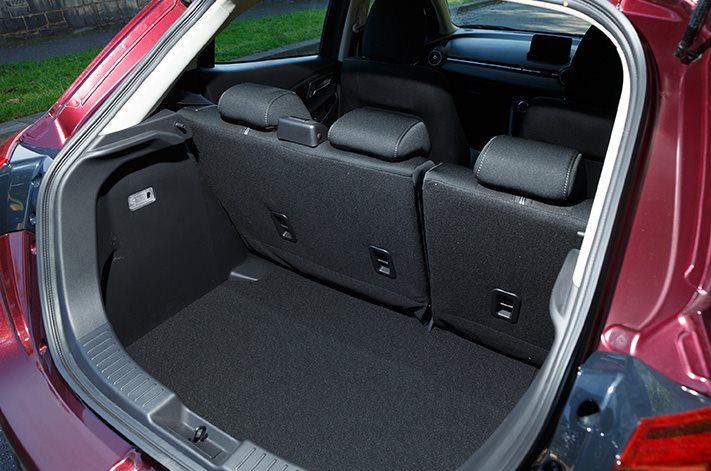 First released in 2014, the fourth-generation Mazda 2’s look has more in common with the previous-generation Rio with rounded lines and short rear overhang. The new Rio, on the other hand, has adopted more conservative straight lines to broaden its appeal. 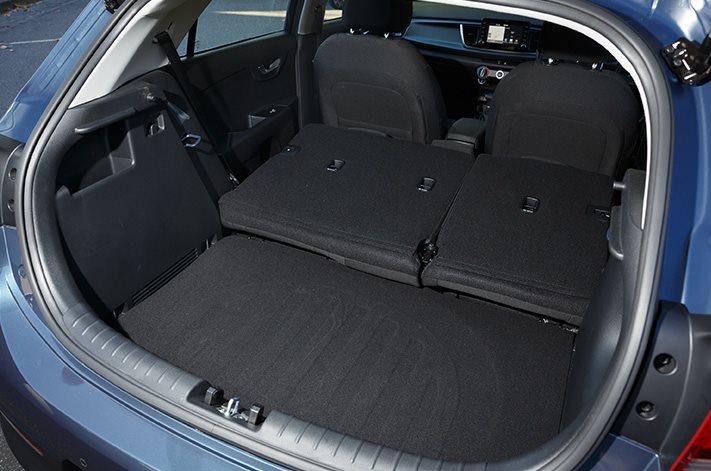 Both are attractive in their own way, but the Rio’s design gives it a more practical edge including a substantial 325-litre boot space compared to the Mazda hatch’s 250-litres – the Japanese sedan has a gaping 440-litre boot though that shape isn’t available in this Genki spec.

The Rio’s 2580mm wheelbase is 10mm longer than the Mazda’s as evident by slightly extra legroom despite a deeper rear seat that provides better lower back and under-thigh support. This and the 30mm extra width [1725mm compared to 1695mm] helps accommodate more cabin storage than the Mazda including a centre console bin with padded lid/armrest, cupholders and tray for phone and keys in front of the gear stick, and bins and cupholders in all four doors. 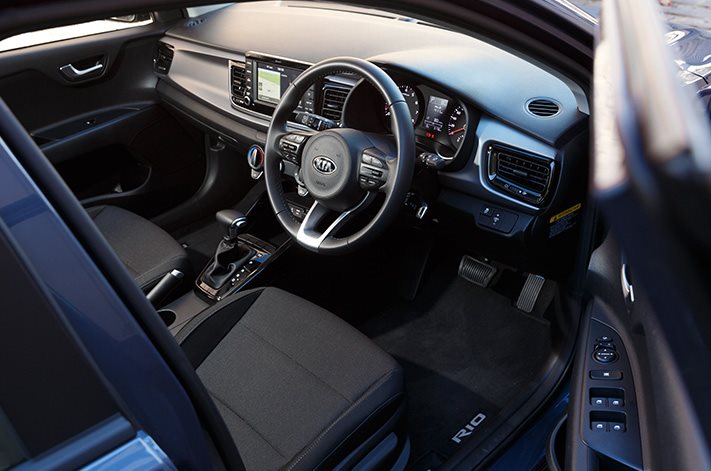 The Rio’s rear seats come with their own USB port, situated between the two front seats.

Each car has comfortable front seats that allow for a low driving position, through the Mazda’s have slightly better lateral support. 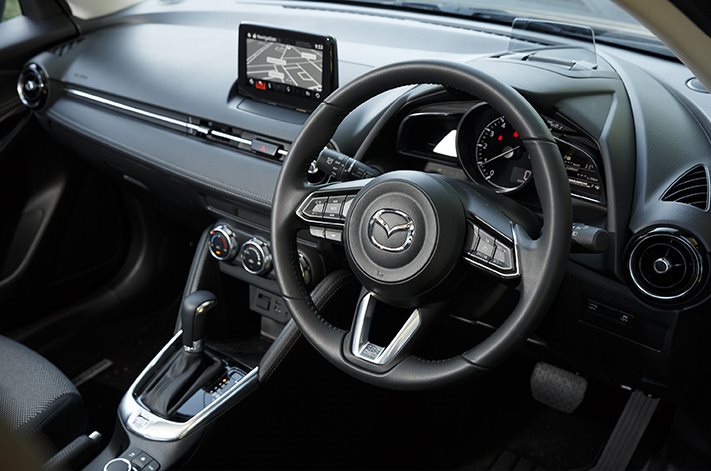 Both cars have attractive, clutter free interiors with nice attention to detail, particularly with touchpoints such as the steering wheel and gearshift (the Mazda 2 uses real leather for these, while the Rio uses leather-look plastics).

The Mazda 2’s interior echoes the rest of the Mazda range in terms of materials and layout including the floating infotainment screen with rotary controller on the centre console. Infotainment functions are intuitive, though Mazda is yet to embrace Apple Carplay or Android Auto. 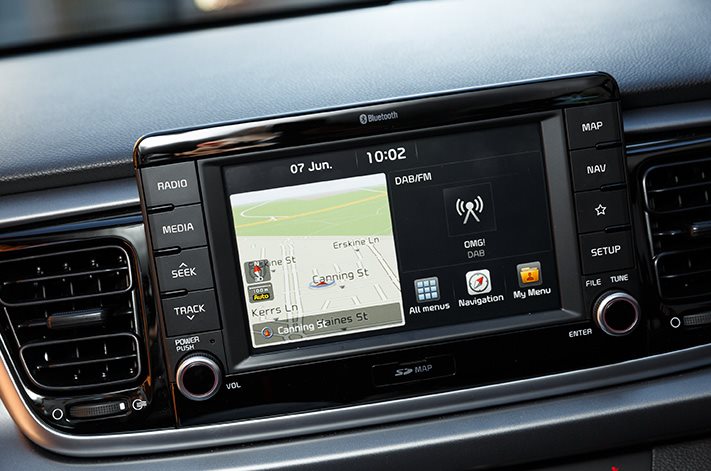 The Kia’s touchscreen is easy to operate on the move, has a ballsier six-speaker audio system and the Apple CarPlay and Android Auto connectivity.

Where the Rio maintains the status quo from the previous generation is performance, with the 1.4-litre engine/four-speed auto powertrain carried over. 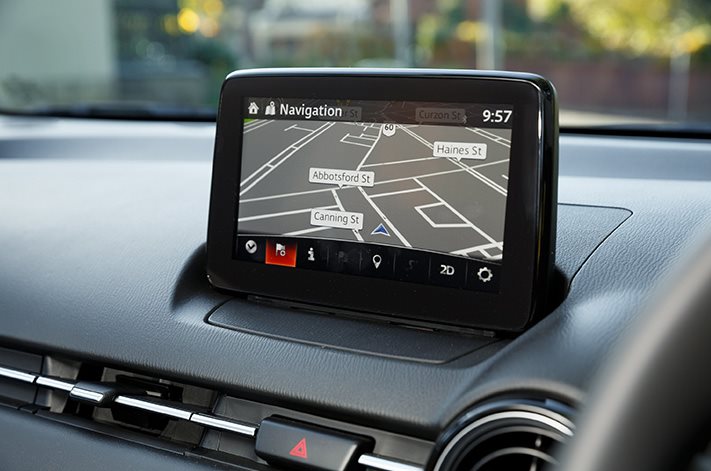 Mazda’s Skyactiv powertrain, including the 1.5-litre direct injection petrol engine and five-speed automatic transmission, seems full of beans by comparison. The Mazda has good response, particularly in the lower gears, and the Sport mode provides some oomph even if the high revs sometimes take a while to settle once you get to your desired speed.

One way around this was to use the manual mode, which provides a nod to driving enthusiasts with a forward downshift/backward upshift movement and quick engine response. 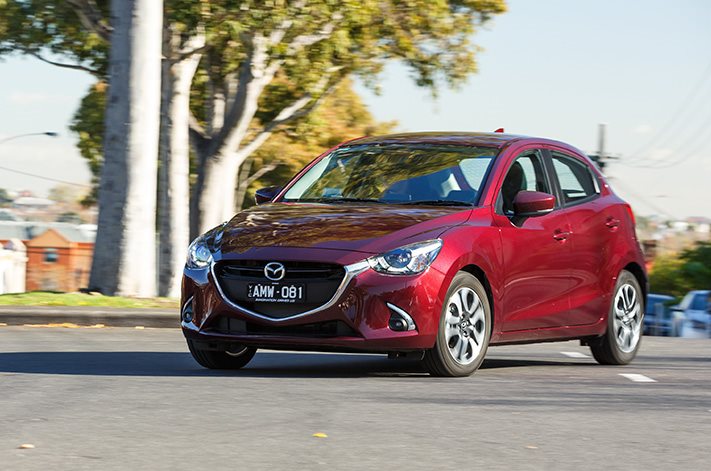 The Kia feels a little more utilitarian. The smaller engine gives an admirable effort and is fine around town, but putting the foot down results in plenty of noise but little motivation – an extra gear would make a hell of a difference.

Fuel economy on test, around Melbourne’s north-west suburbs and out to the Western Plains saw both maintain a fuel economy rating of 7.2 litres. To be fair to the Mazda, a lot of this was in high-revving sport or manual mode and probably would have been higher if not for the “i-Stop” idle-stop function, which you barely notice. 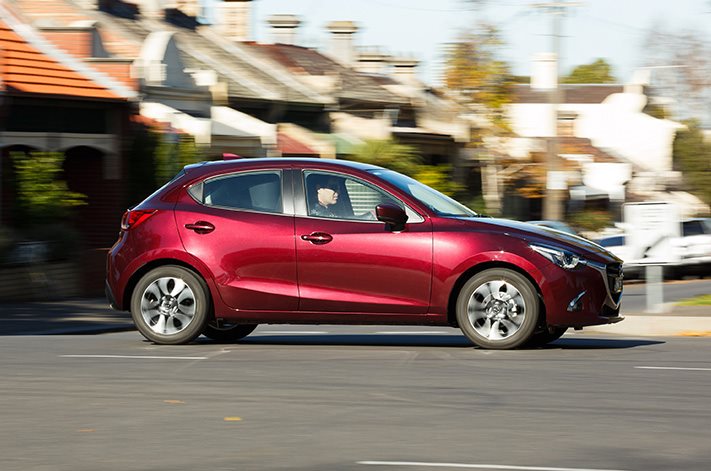 The Mazda’s steering is well weighted and direct. The April 2017 facelift added G-Vectoring Control, which adjusts engine torque according to steering action. This works well in slippery conditions and drivers will generally be unaware if and when the electronic stability control [ESC] is employed to correct direction.

The Mazda’s ride can be a little stiff on rougher roads, partly due to its 16-inch alloy wheels, but the dampers absorb bumps well with little bounce back. Vibration and road noise is far less an issue than it was with previous versions. 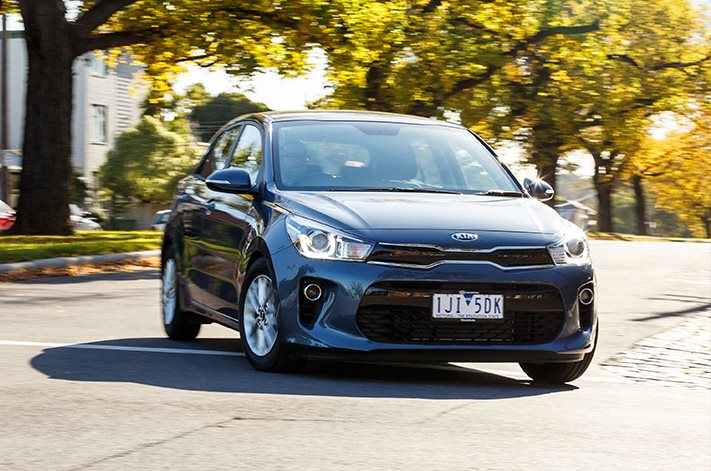 The Rio’s handling also feels refined, with Kia’s Australian engineering team tuning the chassis and suspension for local conditions. The ride is firm but not hard and it negotiated urban speed bumps with grace. The dampers also comply well on choppy roads but are a little bouncy on bigger bumps. On dirt bends I noticed a bit of disconnect between the front and rear ends, which made the ESC work hard to avoid fishtailing.

Steering also feels nicely weighted though there’s a little bit of play when driving in a straight line, necessitating minute corrections to stay in control. 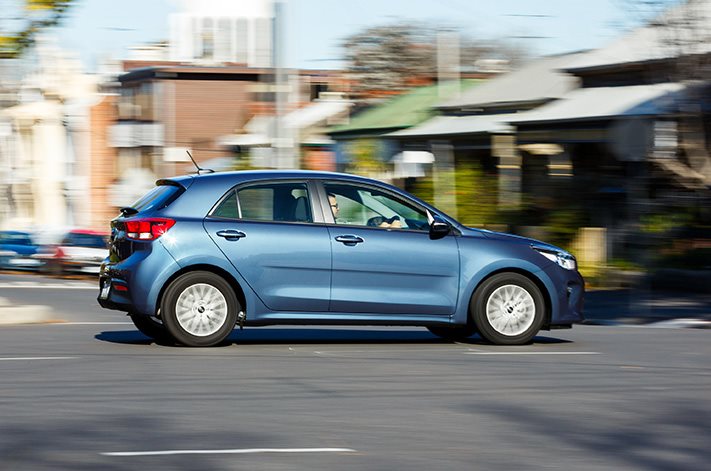 The Mazda’s driveability is marginally better. While it won’t necessarily wow potential buyers, you don’t have to know anything about vehicle dynamics to appreciate when a car simply feels good. And it is surprisingly good.

The Rio is a good car, but the Korean car maker is still an aspiring brand and has worked hard to make this a more sophisticated and capable car with well executed design changes. But it also took the easy route to attract people to showrooms by upping its size and spruiking practicality and few new bells and whistles without doing the hard work, such as improving performance and active safety.

Mazda has achieved this without compromising affordability, and putting the two side by side the $1200 premium on the Japanese car is something of a bargain. 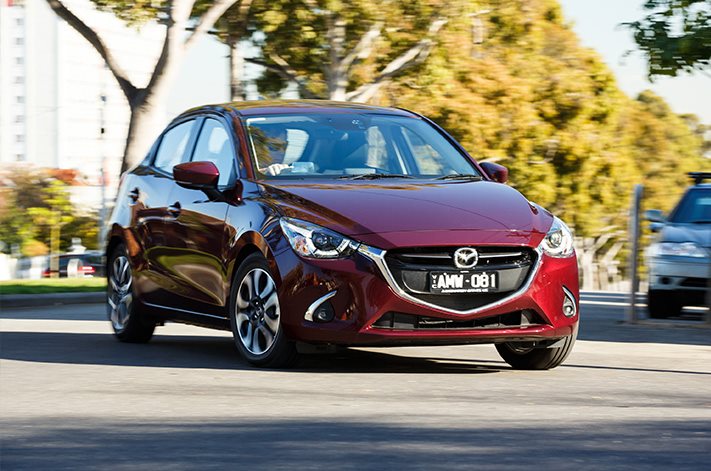