There’s never been a better time to review the dual-cab 4x4 class of 2016 than right now. Wheels pitches eight of the biggest sellers in the segment for the title of King of the Heap. Here's number six, the Mitsubishi Triton.

SIMPLY being the best drive in class doesn’t automatically make a car a best-seller, but brilliant value for money is a sure-fire way to make an impression on buyers. And that’s Mitsubishi’s approach with the Triton.

The launch of the fifth-gen model in May 2015 helped Triton’s buck-beating credentials while attempting to bring its on-road and off-road abilities closer to those of its rivals. Trouble was, changes in the ute market reduced the impact of Mitsubishi’s re-engineering and re-bodying, particularly in comparison with all-new rivals such as the eighth-gen Toyota Hilux. 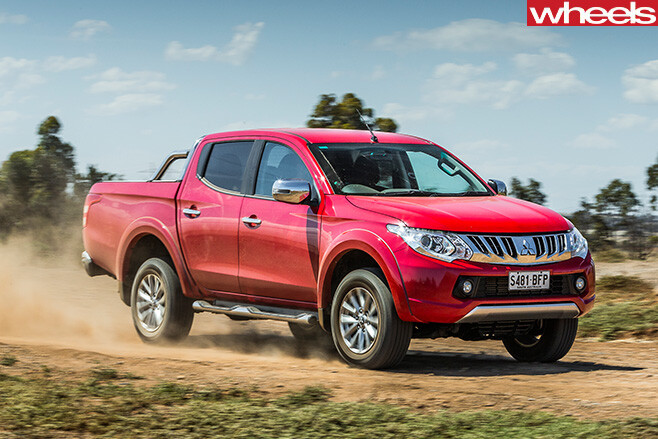 Our mid-spec Triton GLS auto brings safety features such as ESC, a driver’s knee airbag and a reversing camera to put it firmly in the family-car frame. A five-star ANCAP crash rating is a must, while hill-start and trailer-stability assist systems are nice to have. Dual-zone climate, HID headlights, LED DRLs, fog lights and a sporty styling package with 17-inch alloys add to the attraction.

Triton’s appeal extends beyond price and equipment to a roomy cabin with a neatly presented dash with clear silver-rimmed instruments, and an appealing 6.1-inch central touchscreen as part of the new model’s updated audio system (which features digital radio).

The GLS-spec side-steps make the Triton easy to get in and out of, and redesigned front seats banish the old model’s legs-out-in-front seating position for a more comfortable, upright position. The new Triton’s cabin is 20mm longer, almost entirely translated into rear legroom, with more head and shoulder room as well. Pity the rear door aperture is relatively small, and rear occupants miss out on air-con vents. At least there are big door bottle-holders for all. 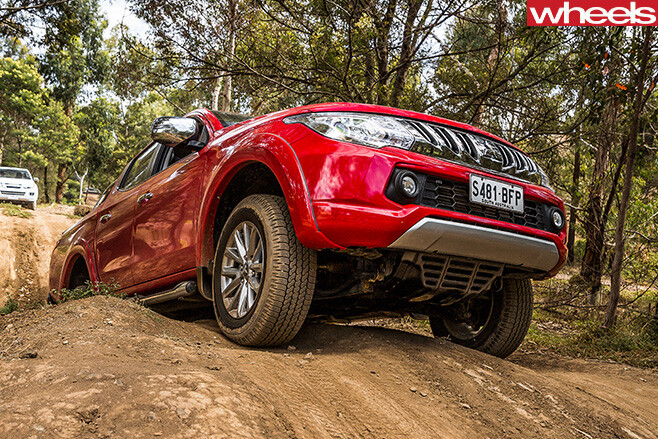 Aussie suspension tuning sought to improve high-speed stability on gravel roads, but it hasn’t smoothed the ride, which remains jittery on lumpy surfaces.

The leather steering wheel is nice to hold and twirls through a typical 3.8 turns lock-to-lock, but it’s connected to light, limp steering that is at odds with the ute’s image and abilities. Big turning circles rule in this realm, though the Triton’s is relatively tight at 11.8m. A beefier new five-speed auto means all Tritons now get the full dose of torque (a stout 430Nm, up 80Nm). In practice the Mitsubishi isn’t as instantly punchy as some of its rivals, but it powers along with authority from the peak torque point of 2500rpm to the 4000rpm redline.

Clocking 11.5sec from 0-100km/h, it sees off Hilux, Amarok and the Isuzu D-Max, but not Ranger or Navara. In that context, an official consumption figure of 7.6L/100km is quite respectable. 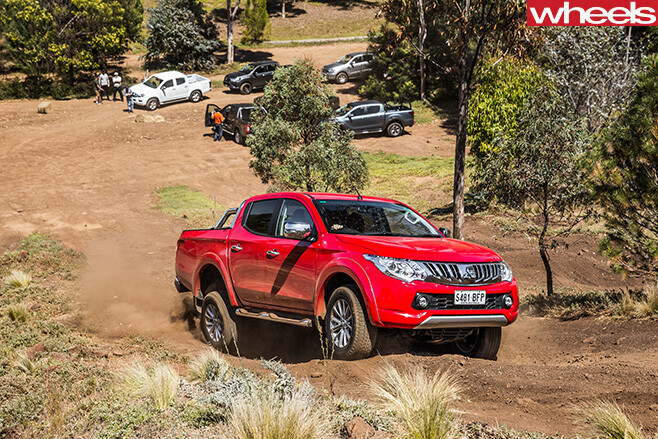 Triton isn’t the best ute off-road – or on it – but considering its roominess, equipment level and affordable pricing, and the fact it’s well-mannered and capable enough for most buyers, we can still see the appeal.

Mitsubishi’s five-year warranty could certainly swing punters in Triton’s favour, even if its styling does the opposite.

The Triton is at an initial disadvantage because it lacks a rear locker (it’s standard only in the top-level Exceed). Combine this with limited rear wheel travel and an unpolished traction-control system and the Triton does it tough on the gnarliest climbs. On the flipside, the full-time Super Select II 4WD system (in GLS and Exceed versions) means no switching between 2WD and 4WD when you go from tarmac to beaten track and back (you can engage 4x4 mode without locking the centre diff), which is handy. Compact dimensions aid manoeuvrability while the engine now picks up air from the guard rather than beneath the bonnet lip.