Wheels pitches 10 of the biggest sellers in the medium-to-large car segment to see which is the best of the current crop. Here’s number 2, the Ford Mondeo.

FORD’S spiritual Falcon replacement seems to be perpetually behind the eight-ball. Two years late getting here due to European factory issues, the fourth-generation Mondeo is now struggling to gain traction in a declining segment – an undeserved predicament for such a capable car.

On many important fronts, the latest Ford Mondeo is at the top of its game. Engineered to be profoundly enjoyable, it possesses comfort and refinement to catch out a Mercedes-Benz C-Class, and dynamic prowess to challenge a BMW 3 Series, for up-spec Camry cash. If only Ford adopted Audi’s design, interior presentation and quality acumen… 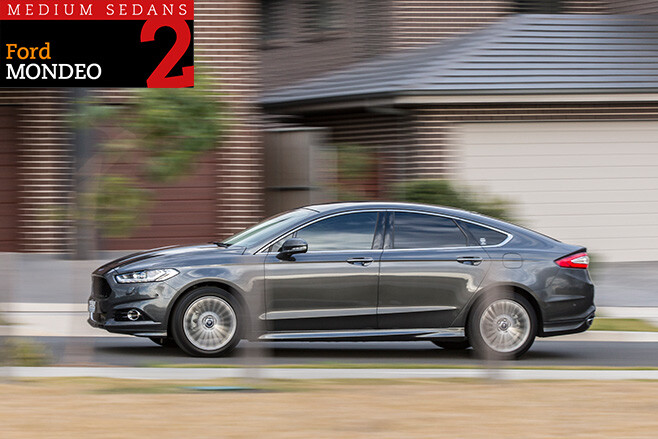 Not that Mondeo Titanium’s cabin is terrible, as the fundamentals – access, space, comfort, ventilation and storage – work admirably. It’s just that dated or oddball detailing undermine Mondeo’s greatness: squeaks and gremlins (see sidebar); complicated instrumentation; an over-proliferation of buttons; no digital speedo (and the analogue’s markings are too small and tightly spaced). 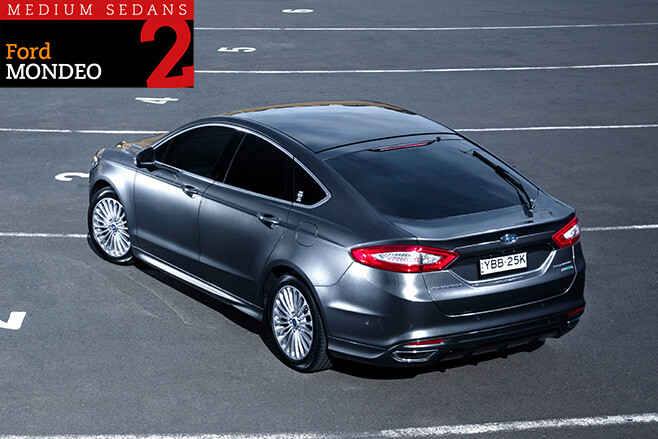 Furthermore, by the time you read this, Ford’s next-gen (and much-improved) SYNC3 multimedia will usurp the flawed SYNC2 system in Mondeo, bringing massively improved functionality and visuals, as well as a broader range of capabilities including Apple CarPlay/Android Auto compatibility.

Any initial hesitations melt away the moment you sink into the sumptuously supportive seats. Adding to high comfort is low fatigue. Mechanical and road noise intrusion is notably muted, aided by this group’s only adaptive suspension with electronic dampers that virtually smother bumps and irregularities away, without feeling floaty. Mondeo’s refinement would wow at twice the price. 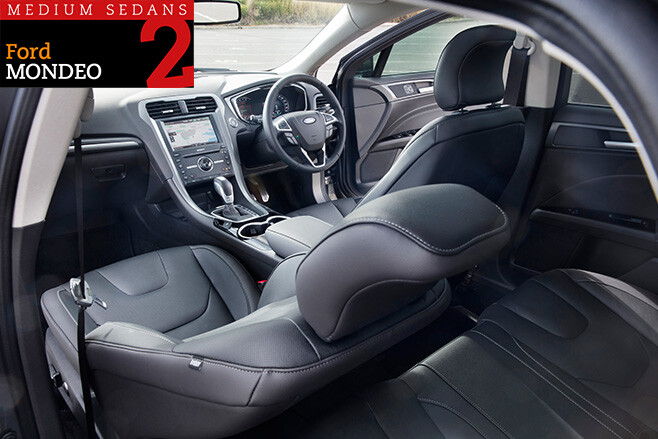 Prodding the pedal reveals how well harnessed the 177kW four-pot turbo’s muscular power delivery is through the front wheels, though performance feels perkier than our track numbers suggest. Brisk rather than blistering (exposing the 1690kg Titanium’s weight), out in the real world the turbo kicks in quickly yet progressively, providing a sizeable and smooth wallop right up to the low-ish 6250rpm redline.

The six-speed torque-converter auto is a useful companion, with an intuitive Sport mode, and properly sorted ratios keeping the spirited engine on the boil.

Just as fast and fluid is the electric steering, defined by an effortless finesse for pin-point cornering and backed up by satisfyingly taut body control, regardless of prevailing conditions. Though assisted by torque-vectoring tech, it’s still astounding how Ford’s lounge suite on wheels manages to handle so sweetly. No competitor is as poised or as plush. 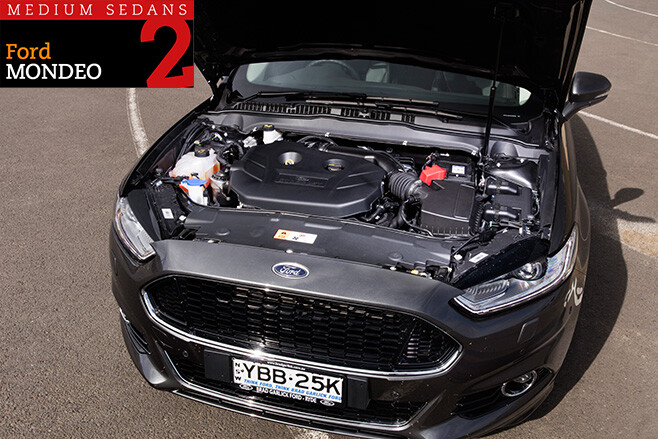 Or as thirsty. Its 11.2L/100km test average was a huge 3.2L/100km adrift of the strapping Skoda Superb, almost matching the big-capacity Holden V6, and that’s what ultimately undermines the Mondeo.

Not so much behind the eight-ball, then, as ahead of the other eight, the charming, occasionally frustrating Mondeo Titanium EcoBoost comes tantalisingly close to sinking every mid-sizer.

Our intended mid-range Trend ($37,290) ended up being a Titanium range-topper, slapping on $7000, more weight and bigger wheels to potentially compromise the Trend’s fabulously supple ride. We needn’t have worried, as it turned out, but increasingly frequent rattles from the sunroof blind, glass roof seal and A-pillar trim almost drove us to distraction. It also suffered from an intermittent electrical glitch that affected the driver-assist systems, voice control, sat-nav and multimedia connectivity. But with Ford’s completely re-engineered SYNC3 system rolling out in Mondeo from July, such problems should be a thing of the past.