Wheels pitches 10 of the biggest sellers in the medium-to-large car segment to see which is the best of the current crop. Here’s number 5, the Kia Optima.

Wheels pitches 10 of the biggest sellers in the medium-to-large car segment to see which is the best of the current crop. Here’s number 5, the Kia Optima.

IT WAS just over five years ago that Kia’s trendily styled but dynamically dire Optima finished dead last in an 11-car Wheels Medium Megatest. Yet here we have the latest Optima GT sitting proudly at number five, just one position behind Skoda’s lauded Superb and two ahead of the well-liked Mazda 6. That’s the level of improvement Kia has wrought with this all-new car. 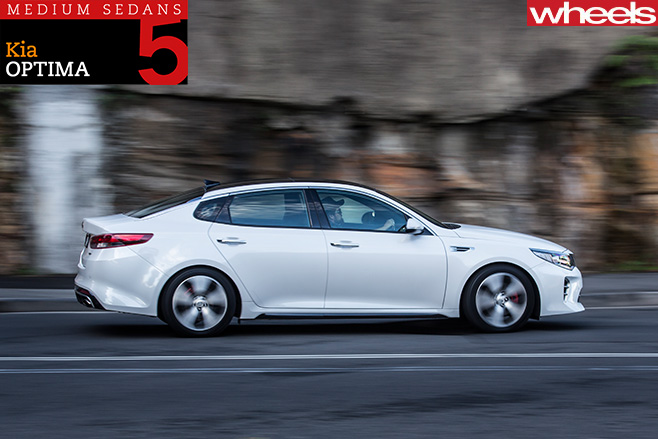 That impression begins the moment you sink into the Optima GT’s better-bolstered, higher-quality leather seats, drink in its more creative dashboard design and grip its sexier, sportier three-spoke wheel. The Kia scores wheel-mounted shift paddles, too, along with a heated steering wheel, cornering headlights, automatic high-beam and a rear-seat USB port. If Sonata Premium heaves with kit, then Kia Optima GT is fit to bursting.

In so many ways, the Optima and its Sonata cousin are so alike it’s uncanny. Voluminous 510-litre boots, similarly opulent and accommodating rear seats, and real-world performance and fuel economy so close to identical it’s almost freaky.

What really advances the Optima GT’s cause are its tyres – expensive 235/45ZR18 Michelin Pilot Sport 3s. Having so much more grip to play with enables the Optima to properly capitalise on the urgent performance it offers. Doesn’t matter if the surface is wet or dry, the Optima gets its power to the ground with far more confidence than the Sonata, let alone the axle-tramping Skoda, and that’s important in a turbo-boosted, family-focused front-driver. 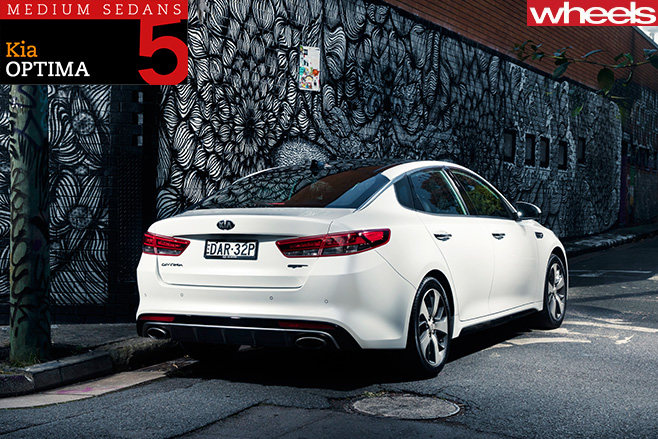 Those Michelins also allow the Optima a bit of leeway when it comes to dynamics. They clearly telegraph the car’s handling limit, making the Optima almost chuckable on sinuous roads, and even though the Hyundai, Mazda and Peugeot display greater handling polish, there’s a deep-seated ability in the Optima’s chassis that makes it quite entertaining when you’re up it.

What the Kia ultimately lacks is finesse. Until there’s quite a bit of lock wound on, the steering feels rather wooden and disinterested, and even though it enthusiastically favours its outside-rear wheel once pointed into tighter corners, the transition is rather abrupt and lacking in fluency.

The flipside is a smooth, reasonably level and relatively sophisticated ride compared to many of its rivals, though again without the sweetly damped finesse it deserves. That said, what the Optima lacks in rough-road composure – especially compared to something like the unflappable, if unrefined, Camry – it makes up for in overall smoothness and quietness. 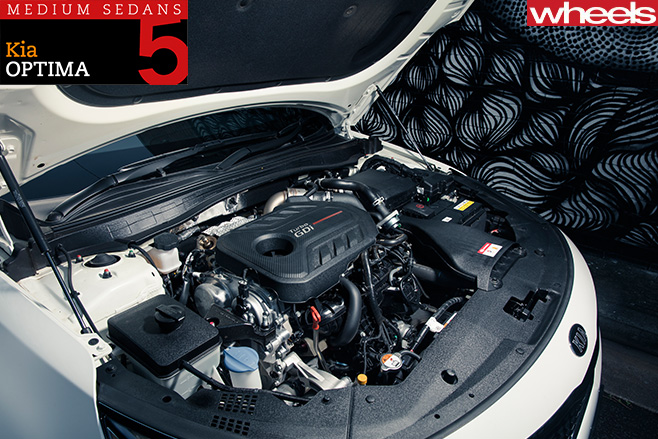 So while the Optima GT may not have the Toyota’s Aussie-bred toughness, the Subaru’s all-wheel-drive purchase, the Hyundai’s dynamic fluency, the Peugeot’s Gallic poise, or the Mazda’s hard-driven precision, it’s a better all-rounder than all of them.

With a colourful, beautifully built interior, more performance and grip than most people could ever want, as well as a market-leading seven-year warranty, suddenly paying $45K for a Kia sedan seems like value. It isn’t exciting, or brimming with personality, or stunningly beautiful to look at, but there’s an honesty to the Optima GT that somehow makes it more impressive the more time you spend with it. NP

Like seven of the other cars in this test, Kia’s latest-gen Optima is available in wagon form, though not in Australia just yet. Unveiled at the Geneva Show in March for a European on-sale later this year, the handsome Optima SW shares the sedan’s engine line-up, as well as its overall length, though it’s 15mm taller and accommodates 552 litres of cargo space underneath a retractable blind. Kia Australia is currently evaluating the SW, but is yet to make a decision. 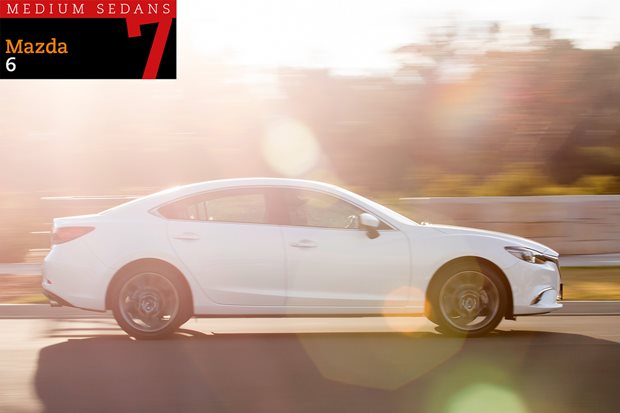 Wheels pitches 10 of the biggest sellers in the medium-to-large car segment to see which is the best of the current crop. Here’s number 7, the Mazda 6 GT. 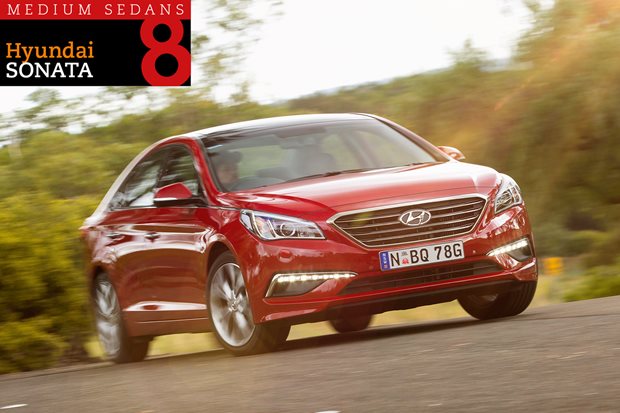 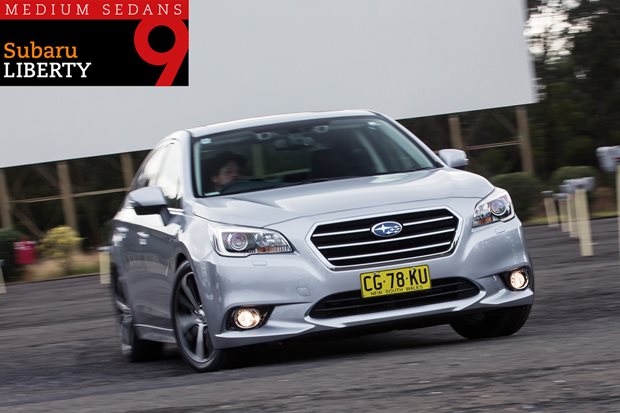 Wheels pitches 10 of the biggest sellers in the medium-to-large car segment to see which is the best of the current crop. Here’s number 9, the Subaru Liberty.