G-Vectoring Control and a bunch of other subtle upgrades bring the MY17 Mazda 6 into line with the rest of its family.

The debut of Mazda’s G-Vectoring Control technology on its flagship sedan and wagon range, in conjunction with a bunch of noise-reducing, luxury-enhancing measures to give the Mazda 6 a chance up against Volkswagen’s hugely talented Passat.

This is the third update for the current-generation Mazda 6 since it launched here in December 2012, and while it’s more of a spruce-up than last year’s serious makeover, it brings G-Vectoring Control to the table, promising more cohesive handling and improved steering connection.

A more polished car than last year’s model and a significant, if subtle, step forward in contemporary Mazda dynamics. While the 6 lacks the packaging and refinement credibility that makes the Volkswagen Passat such a force to be reckoned with, the Mazda continues to offer a unique blend of bulletproof Japanese reliability with European-style driver appeal.

IT MIGHT be four years old, and counting, but Mazda’s flagship passenger car, the Mazda 6, simply refuses to fall behind the rate of progress. Like an older sibling who’s not yet prepared to give-up the spotlight, the 6 has put its hand up for yet another round of improvements barely 18 months after 2015’s extensive mid-life update.

Playing catch-ups to the new-generation CX-9 and recently updated Mazda 3, the changes to the latest 6 focus on further improving its refinement, updating its technology and making the flagship Atenza’s cabin feel a bit more special. But then there’s also Mazda’s patent-pending G-Vectoring Control system, which is surely of greater interest to Wheels readers than titanium dashboard trim and a satin-chrome glovebox latch.

Externally, you’ll need to be the world’s biggest car nerd to spot the difference. The side mirrors have been redesigned and now electrically fold when you lock the car (except on the base Sport variant), and there’s a new high-flake paint colour (Machine Grey Metallic) that gets a premium-sparkle finish like the optional Soul Red hue. 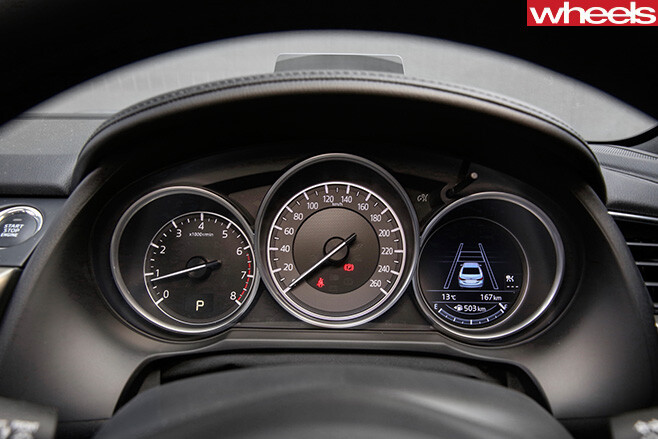 Inside, the big giveaway is a new-generation steering wheel (from the CX-9) with a more intuitive button arrangement, and if you’re in the range-topping Atenza variant, Nappa leather trim with contrasting piping, black headlining, and titanium-effect trim inlays. Everything gets full-colour for the right-hand instrument dial’s ‘Active Driving Display’ and standard DAB+ digital radio, while the GT and Atenza score a heated rear seat, with switches mounted in a new centre armrest with exposed stitching.

The remaining MY17 changes come down to the bits you can’t see. There’s G-Vectoring Control, of course, but also several measures to reduce the 6’s noise, vibration and harshness (NVH). Improved rear door sealing, thicker front door glass (a ‘soundproof’ type on GT and Atenza), and more sound deadening in the roof combine with several NVH measures on the turbo-diesel 6 to put a pillow over this car’s often-flappy mouth.

A ‘High Precision DE Boost Control’ system improves the precision and response of the engine’s torque delivery in light-throttle situations, while a ‘Natural Sound Smoother’ (a damper in the hollow part of the cylinder-piston pin) reduces diesel knock, particularly from standstill, and enhances the diesel’s acoustics. Finally, ‘Natural Sound Frequency Control’ (the Japanese love their marketing terms!) monitors injection timing to ensure sound waves from different stages in the combustion process cancel each other out, in order to reduce vibration.

That sounds promising in theory, but it’s not something we can report on yet, seeing we only drove a 6 Atenza petrol sedan. The NVH improvement is marginal at best, and over some types of road surfaces, noise still manages to find its way into the cabin, which isn’t helped by the firm ride on the Atenza’s 19-inch wheels. The unchanged 2.5-litre SkyActiv-G petrol four also gets a bit vocal higher up in the rev range, but it remains a strong, lively and responsive engine that never sounds unpleasant. 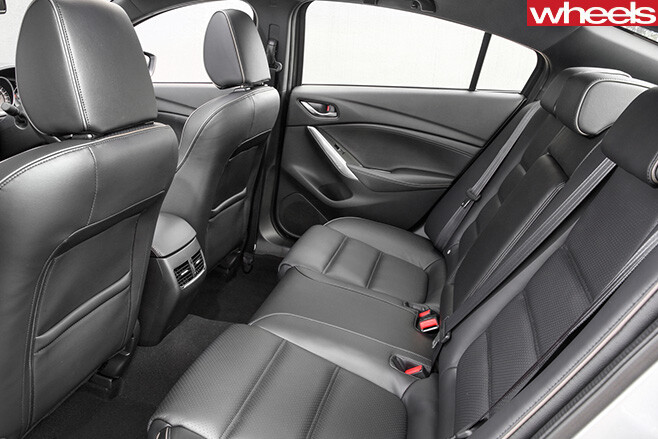 But the biggest addition to the 6 is Mazda’s GVC technology. Mazda claims that GVC reduces fatigue and increases stability by altering the amount of torque delivered to each front wheel while driving, resulting in smoother steering inputs and less roll movement. On our first taste in Melbourne and its outer surrounds, the updated 6’s steering flowed smoothly, with enough feedback for it to be both relaxing and entertaining to the keen driver, suggesting GVC achieves what it set out to do.

Handling-wise, there really is a linear and controlled feel to the way the 6 turns into corners. Gone is the vagueness and moments of disconnection of the previous model, replaced by a crisp consistency as you apply throttle through corners, further underlining the effectiveness of GVC.

But if your attention does begin to stray, the MY17 6 gets an upgraded version of ‘i-ACTIVESENSE’, adding pedestrian recognition to its ‘Smart City Brake Support’ function while extending the autonomous braking’s intervention threshold to 80km/h (up from 30km/h). The ‘Smart Brake Support’ function (audible collision alert and two-stage autonomous braking) also expands its operating range, now 15-160km/h, while traffic-sign recognition displays the speed sign in the instruments new full-colour data display.

So, besides a bunch of blink-and-you’ll-miss-them improvements, the 6 line-up carries on in very much the same fashion as last year. Yet it’s now a more driver-friendly experience, while retaining the sporty flavour that has always been a 6 hallmark. Kudos to the Japanese for hedging their bets on stuff that makes a car feel better, rather than simply look different.