WHAT IS IT?
It’s Mazda’s biggest and most expensive vehicle; a seven-seater SUV designed with Aussie families in mind that boasts a wider range of technology than any other Mazda on sale. It is cheaper, lighter, smaller, and available in a broader model spectrum than before.

WHY WE'RE TESTING IT
CX-9 introduces a brand new engine that combines Mazda’s SkyActiv engineering philosophy with forced induction for the first time. The CX-9 also promises to add some sparkle to the otherwise dull cohort of family-friendly, three-row SUVs. 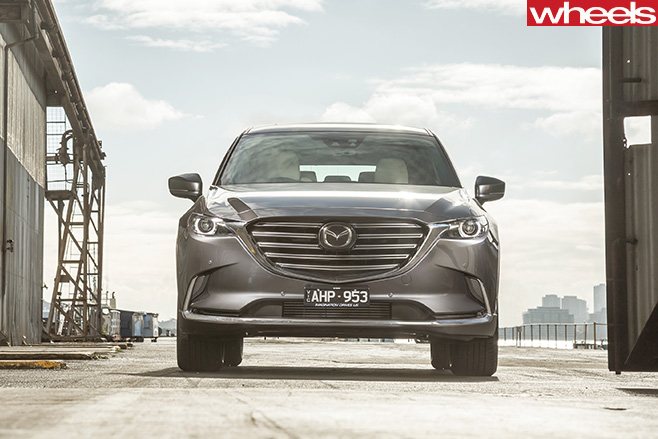 THE WHEELS VERDICT
Mazda is onto a good thing. The Mazda CX-9 ticks boxes for practicality and cost effectiveness without sacrificing style. Families will find it hard to go past.

THE WHEELS REVIEW
AS A rule, purely functional seven-seaters are a snooze-fest. Space-hungry families demanding a third row are often forced to choose between lacklustre high-riders and the coma-inducing boredom of owning a people mover. Driving either is like an early night on New Year’s Eve – there’s a lot you’re missing out on. 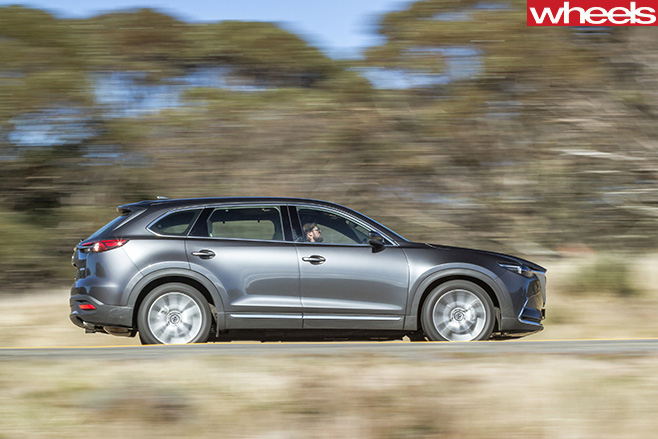 Mazda is taking aim at the status quo, with its all-new CX-9 in the chamber and the hammer cocked. The flagship’s second-coming injects a welcome dose of design flair to the large SUV segment dominated by the dowdy and drab. It’s almost a decade since its predecessor launched, and CX-9 is now an entirely grown-up and genuinely interesting proposition, still majoring in practicality and providing an image-conscious choice for more discerning buyers. 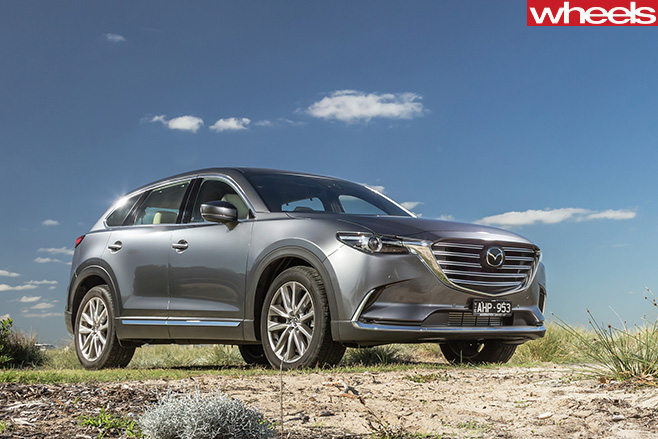 It’s quite a big change, then – and we haven’t even mentioned the 2.5-litre, turbocharged four-cylinder centrepiece. This engine is the first to couple Mazda’s SkyActiv engineering philosophy with forced induction, producing outputs of 170kW and 420Nm on regular 91RON unleaded. High octane fuel can eke out an extra 16kW.

The turbo petrol four-pot is the only engine available across the CX-9 range. Its 34kW deficit to the silky V6 it replaces is made up for by the effectiveness and delivery of its extra 53Nm. Adding a turbo hasn’t muffled the vocal nature of the SkyActiv engine, which has a harsh edge to its note that can be intrusive at higher revs. Thankfully, the full force of its torque is available from a low 2000rpm so there’s little need to drive it near the redline. 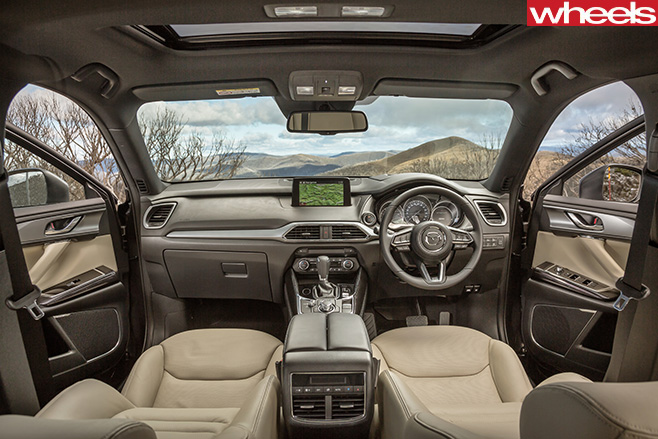 Even before the CX-9 has turned a wheel, it is ahead of its competitors in terms of showroom sizzle. In top spec Azami trim, with its LED headlight package and larger, 20-inch alloys, the CX-9 does a lot to bridge the gap between the current crop of humdrum seven-seaters – we’re looking at you Toyota Kluger and Holden Captiva – and more upmarket offerings like the Volvo XC90 and Audi Q7.

Up front, a squinty gaze and huge chrome grille form the latest, and most striking incarnation of Mazda’s Kodo design language. The sheer size of the CX-9’s dramatic bodywork verges on imposing, yet it retains handsome proportions and an athletic form, that when studied closely reveals a level of subtlety and attention to fine detail rivalling the more premium brands.

It gets even better once you pull the door handle. The front half of the cabin is a particularly refined composition of textural materials and elegant styling. Mazda has deliberately created a feeling of separation from the two rows behind. Its hushed and well-equipped interior houses a full suite of safety technology as standard. Only the base model misses out on leather trim and a larger, top-mounted touchscreen. 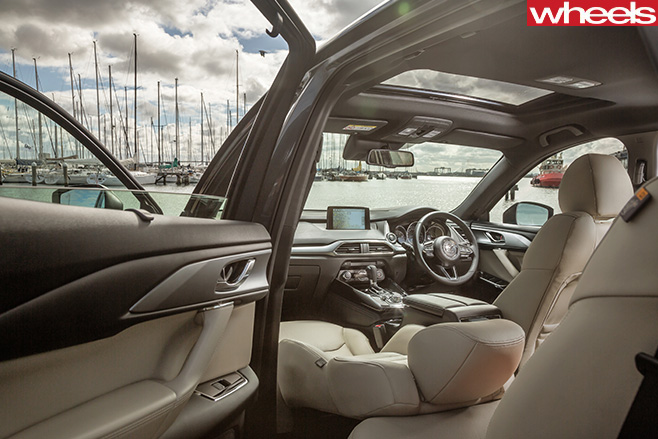 Smarter packaging has created more room inside by pushing each wheel further toward the corners of the stretched CX-5 platform. The wheelbase is 55mm longer than the old CX-9’s, though the body is 31mm shorter at 5,075mm overall. Boot space is a useable 230 litres with the third row seats deployed, rising to 810 litres when they aren’t, and a mighty 1641 litres when the second and third rows are stowed.

Passengers in the nosebleeds miss out on third-row air vents, but won’t feel short-changed thanks to great visibility through generous window apertures, and head- and leg-room accommodating enough to host adults for short trips.

The CX-9’s ride shows initial polish. Mazda’s trustworthy dynamic competency is felt in its well-controlled tautness, though the 1.9 tonne wagon can’t disguise its heft when thumping over sharper deviations. Braking lacks bite at the top of the pedal travel, and asks for more input than expected, even in stop-start traffic. 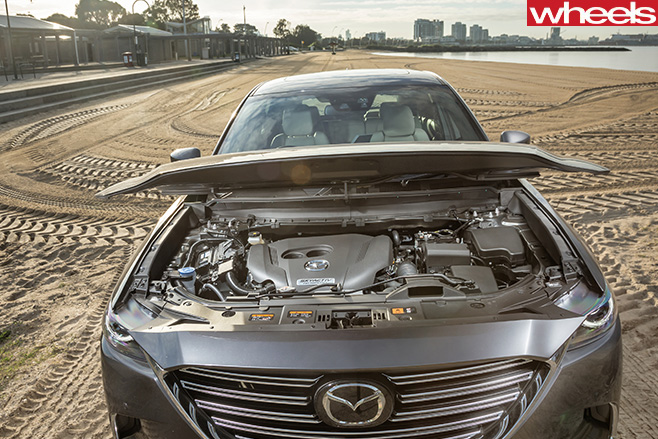 A weighty steering tune requires a fussy amount of wheelwork at times, and that too makes the car seem big. U-turns, for example, now need 11.8 metres of road – almost a full metre more than the Hyundai Sante Fe – and feel similar to the orbit of a small moon. That said, these are the difficulties inherent with many cars of this size, and in its class the CX-9 strikes a favourable balance of ride vs handling.

Mazda has put a bullet in the customary blandness of seven-seater load-luggers, and delivered an SUV that extends beyond the mundane task of putting bums on seats. Hiroshima has cracked the code. 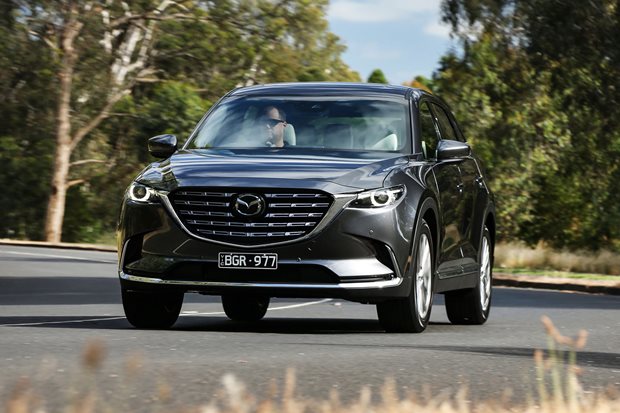 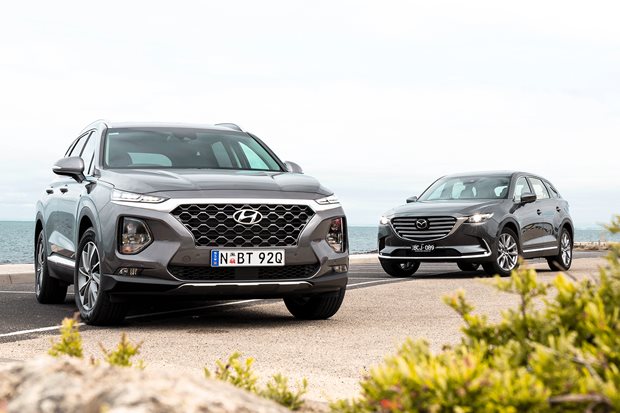