AFTER a world-beating 53 years building cars in this country – longer than anywhere else outside Japan – the Camry tested here will be Toyota’s sayonara to Australia. Yet in much the same way it signals the conclusion of domestic production, the evergreen Camry bookends the back end of this megatest field.

Perhaps unfairly, the Camry Atara SL Hybrid’s last-place position has more to do with the strength of the competition than any serious weaknesses on its behalf… apart from its interior. While last year’s extensive facelift refreshed every exterior panel, cost considerations meant the Aussie-built Camry missed out on the new dash and fittings that debuted elsewhere, leaving it with 2011’s cheap, cheerless plastics and a low-rent feel about as desirable as a home invasion. 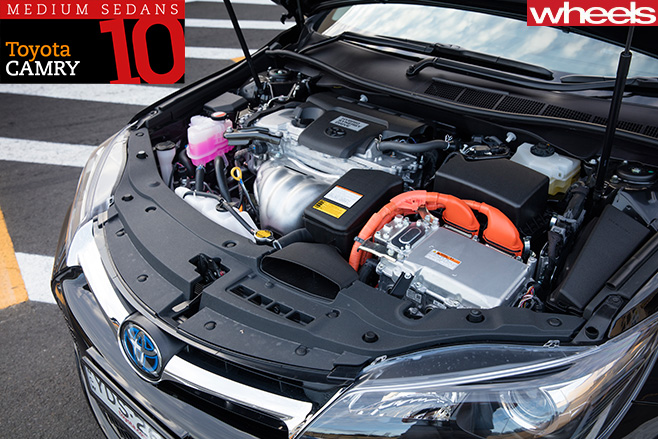 In the Toyota’s defence, it’s roomy inside, with just enough acreage to seat three across the back seat, but it has obviously been designed for maximum wear over flair. There’s precious little beyond the basics – a centre-rear armrest, rear air vents, 600ml bottle holders in the doors, an electric rear window blind, leather-faced trim and pretty ‘Optitron’ instruments in this top-spec variant – and Camry’s seats merely keep bottoms off the floor. It’s a cabin of shapeless surfaces, minimal four-way adjustment for the front passenger and a wash-’n’-wear back section with an overly reclined backrest guaranteed to send tipsy ladies night-night on their way home from the club.

Things improve on the move, thanks to Camry’s sweetly muscular petrol-electric drivetrain and its effective suspension tune. Most punters would be surprised how quickly you can hustle a Camry Hybrid, particularly once you get used to the CVT’s lag and learn to stamp on the right pedal early. Its undeniable punch (15.8sec for the quarter) teams with a fluid and nicely balanced chassis that inspires confidence, at least until the ESC senses any kind of yaw and slams on the stability anchors like an irate parent smacking the dinner table. 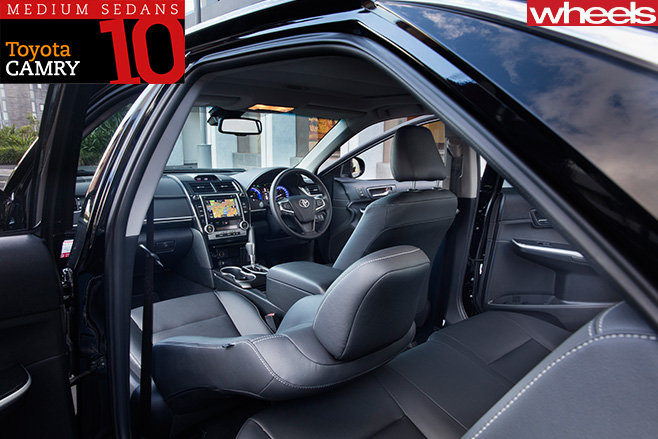 That’s a pity because this Toyota has a genuine affinity for Aussie roads. Through bumpy corners, the unruffled Camry holds its line gamely, though suspension refinement isn’t its strong suit. That impression could have been exacerbated by the test car’s rattly centre console – seven of our test cars suffered cabin rattles – but there’s no escaping Camry’s five-year provenance. Like a Hollywood starlet past her prime, Toyota’s mid-sizer is a rapidly ageing proposition among a sea of fresh faces.

Yet there’s a fundamentally sound decency to the workmanlike Camry. Even outside the Hybrid’s preferred environment – city gridlock – its 9.1L/100km test average puts it well ahead of the similarly swift Mazda 6 and Ford Mondeo, if not Peugeot’s parsimonious 508 and the VW Group’s outstanding Superb and Volkswagen Passat. And Camry Hybrid’s deep boot is much roomier than it used to be, supported by a full-size 17-inch alloy spare lurking underneath. 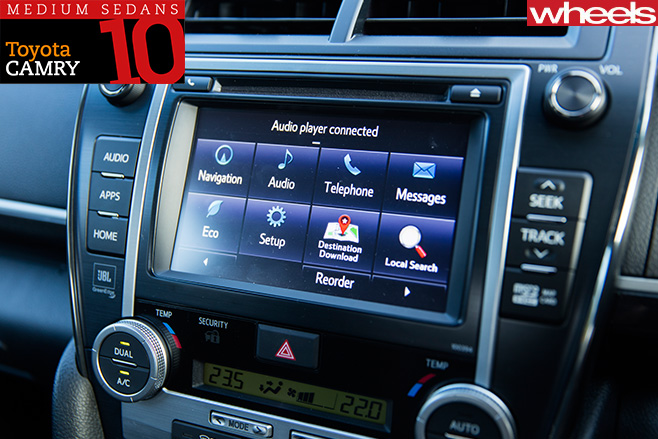 While it does nothing spectacularly, the Toyota Camry is also completely inoffensive (if you can tolerate its interior presentation) and surprisingly capable when the point-to-point chips are down. And let’s not forget its driveability superiority to other Japanese mid-sizers like Honda’s dismal Accord and Nissan’s invisible Altima that didn’t even make this field. Just don’t bother with this $40K variant – value lies with the far cheaper Atara S Hybrid.

In several areas, the final Aussie-built Camry is an admirable piece of work. But compared to where the global benchmark is in 2016, it’s well adrift.

Soon to be expat

Toyota’s ninth-generation Camry is aiming for a US launch in the third quarter of 2017 and will be a substantially altered car. Riding on a brand-spanking Toyota New Global Architecture platform (shared with new-gen Prius), the next Camry is expected to be lighter, stronger and funkier than today’s model, whose underpinnings date back more than a decade. A 2.0-litre turbo-petrol four is rumoured to replace V6 models in the US, likely the 8AR-FTS unit used in Lexus’s 200t variants. No official word as to where Australia’s next Camry will hail from, but expect Thailand, sometime in 2018.