JACK of all trades. It’s something many of us would love to be, kinda like any bastard who can bench press 100kg-plus, but also sing, dance, make people laugh, build a new front fence and effortlessly command a barbeque.

But if we’re talking cars – or, in this case, range-topping dual-cab utes with delusions of passenger-car grandeur – trying to be all things to all people is a hard thing to master. The original ’48 Holden did it. Roomy enough for six, light enough to be both lively and fuel-efficient, yet strong enough to tackle much of what the unpaved Aussie Outback could throw at it, the monocoque-bodied ‘humpy’ Holden was a bit like Hugh Jackman dressed in an Akubra and wife-beater singlet.

By 1950, it was our best-selling car. Sixty-six years later, that title is held by the separate-chassied Toyota Hilux (with 42,104 sales), leaving the once-dominant large-car class in a state of abandonment. And Holden? The evergreen Commodore continued to defy the large-car trend with a steady 25,860 sales, but the Colorado pick-up (18,386) is quickly closing the gap, and that’s without any sales boost from the extensively facelifted (and comprehensively improved) MY17 model range. So this is what a working-class Ford versus Holden stoush looks like in 2017. Two fully-loaded five-seat utes, powered by torquey turbo-diesel engines with six-speed automatic gearboxes, and enough equipment sizzle to fill a warehouse. Besides the long-departed TRD Toyota Hilux (with its supercharged petrol V6) and the gutsy Volkswagen Amarok TDI V6, the Ranger Wildtrak and Colorado Z71 are about as sporty as a dual-cab is gonna get. The Holden even has a muscle-car-esque model name, though in truth it’s simply an upper spec level borrowed from GM’s unrelated Chevy Colorado and Silverado pick-ups sold in the US. 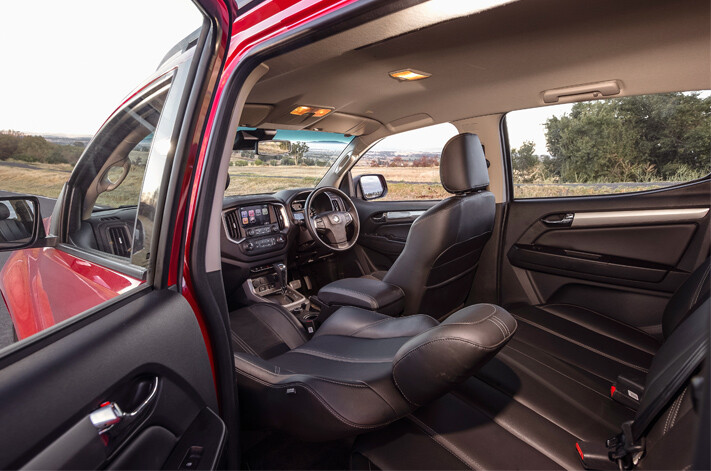 At least the Colorado Z71 backs up its tough-sounding name and sinister black rims with class-best performance. Alterations to the MY17 Colorado’s transmission calibration and a multitude of refinement-enhancing measures ensure its 500Nm-strong turbo-diesel four defies its capacity deficit to put clear distance between the Colorado’s LED taillamps and the Ranger’s bluff snout.

Off the line, the Holden is instantly in the game, hooking up and charging forward with positive upshifts and significantly more snot than the five-cylinder Ranger.

The Colorado’s 2.8-litre four is a more agricultural engine than the Ranger’s 3.2-litre five, with fan noise and diesel clatter at low revs, and more gravel in its voice, but there’s a sweet spot between 2800 and 3200rpm, and given the grunt on offer, it’s easy to forgive the Z71’s shoutier manner. The Ranger’s endearing five-pot might be the suave operator here, but it has less torque in all situations and has to be pushed hard to keep the Colorado in sight on fast country roads.

It, too, upshifts at just 3600rpm (and falls off a power-curve cliff shortly thereafter), though you can feel the Ranger’s torque-convertor slurring drive, particularly in third gear, when it should be throwing everything it has at its rear tyres, like the Colorado does.

There’s another 100kg to deal with as well, leaving the Ranger feeling slightly breathless at times, and thirstier too, drinking 1.2L/100km more than the Colorado on test. 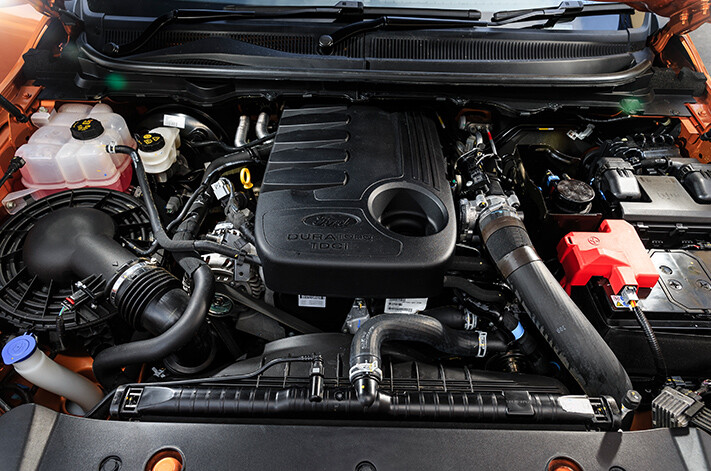 But the Aussie-developed Ford turns the tables when it comes to handling, steering and refinement. From the moment you climb aboard (over annoyingly intrusive side steps), the Ranger feels like a more expensive truck. Deeper, more supportive, more adjustable seats, a smaller steering wheel and a vastly superior driving position elevate it to proper passenger-car standards.

Turn the wheel and the Ford responds, immediately pointing its nose where you want, and informing its driver what the front and rear ends are doing.

Primitive as a leaf-sprung live axle may be, the Ranger’s rear end feels interconnected with the rest of its suspension set-up, resulting in nicely balanced handling and an unexpected level of feel.

It’s an effortless car to drive quickly over smooth, winding surfaces, though when bumps join the party, the Ford chooses to give its passengers a free horsey ride, whether they’d like one or not. 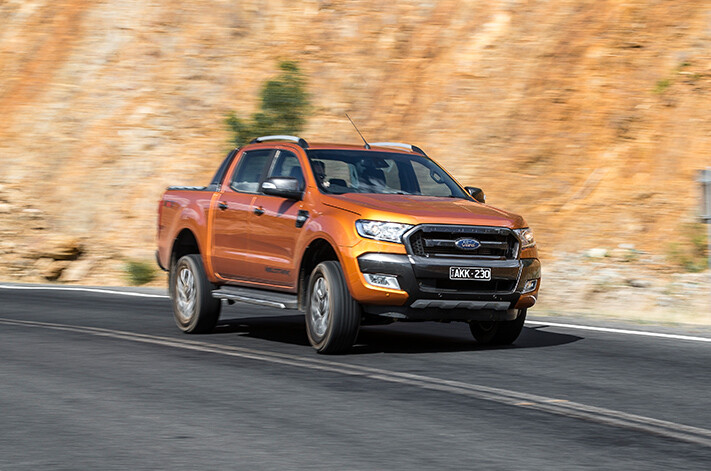 Indeed, it’s quite difficult to describe how bad the Ranger Wildtrak’s ride is without using expletives. ‘Equine’ was one we tossed about (pun intended), seeing as it alluded to the Ranger’s clod-hopping, clippety-clop gait over any kind of road scar, though it’s the urban ride that stinks most.

On anything bar a billiard-smooth surface, the 18-inch-wheeled Wildtrak transmits a jiggly, pattery motion up into its cabin that must surely be car-sickness kryptonite. Adding passengers improves it slightly, and so do 100km/h-plus speeds, but if this is the compromise for having a one-tonne load-carrying tray out back, then you get what you deserve if you aspire to owning a dual-cab ute as the family express. Compared to a regular car, the Colorado’s ride is also pretty dismal, but it’s far less reactive than the Ranger over bumps, and much less irritating as a result.

There’s an irony here, though, because the Colorado’s almost-comfortable ride is countered by a contorted driving position destined to offend almost everyone.

And in urban driving, the pedal positioning adds right-ankle torture to the mix. Bizarrely, the manually adjustable front passenger’s seat has better under-thigh support and is actually quite comfortable… The Colorado’s handling follows a similar hit-and-miss formula. In faster country-road corners it transfers load onto its outer-rear tyre as its body leans, achieving quite respectable chassis balance and a confident stance.

But in tighter stuff, there’s plenty of understeer to be had unless you do your best to try and minimise it, and same goes for the tyre howl from its 265/60R18 Bridgestone Dueler rubber (identical to those fitted to the Ranger). 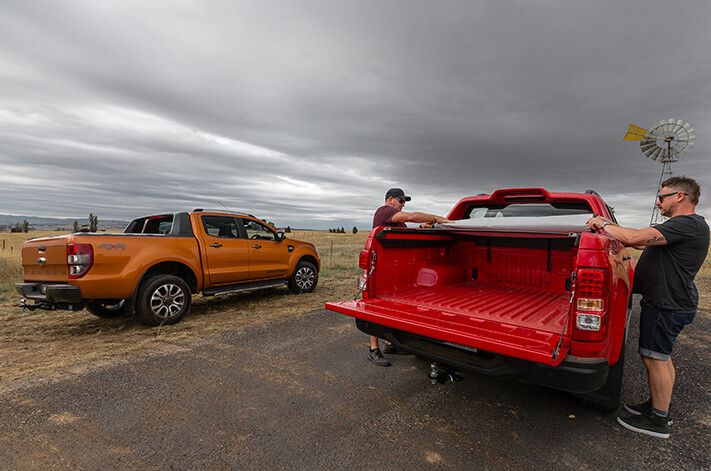 There’s a vagueness to the Colorado’s steering at straight ahead and a sense that its simpler strut front suspension (Ranger has double wishbones) falls over on itself, reducing the contact patch of its tyres.

Given the level of performance on offer, it can be frustrating trying to keep the Colorado tidy on really twisty roads, and then there’s its coarse-surface road noise, which is significantly greater than the Ranger’s.

At least the Colorado’s new dashboard is a revelation compared to the old model’s tat, though the Ranger’s stitched dashboard top, padded door trims/armrests and superior seating make it feel significantly classier. 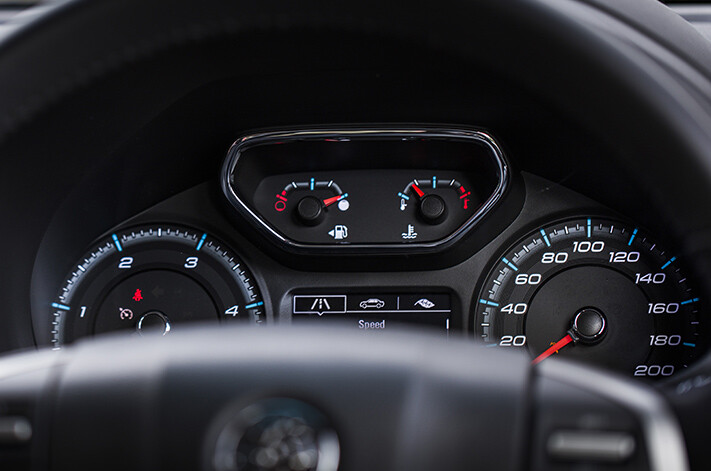 The Ranger’s main flaw is the button-fest on its steering-wheel spokes and lower centre-stack, forcing you to take your eyes off the road for some time in order to find stuff.

The Colorado’s GM-generic centre switches and column stalks are much easier to operate, with clear markings and a simple-to-use layout that also looks reasonably neat. But the ugly carry-over steering wheel is a sad reminder of just how rubbish the Colorado used to be before Holden dragged it into this century with this MY17 update.

What no amount of fettling can overcome, however, are the fundamentals of the Colorado’s ageing design, starting with its short wheelbase (over 120mm less than Ranger’s) relative to its overall length (longer than Ranger). The Holden’s seats are mounted higher, to the detriment of legroom and cushion support, front and rear, whereas you sink into the leggy Ranger’s lovely seats, and enjoy greater space and fields of vision. And that’s the divider in this latter-day Ford versus Holden battle. The Ranger is clearly a holistic design, feeling much more car-like in its people-carrying capability, but also better kitted-out for the tray-bashing duties it will hopefully undertake.

The Holden, on the other hand, simply can’t overcome its more obvious commercial-vehicle origins, and the lesser expectations of markets like Brazil, where this current generation was developed. That said, it makes the most of what it has on offer, and if you can cop its driving position, then it’s a more affordable, more efficient and inherently honest form of transport.

If it wasn’t for its terrible ride, the Ranger would walk this comparo. But the compromise of blending Ford dynamic DNA with one-tonne load-carrying ability means it isn’t such an obvious choice. STREET MACHINE
Ranger’s ride or Colorado’s driving position? Which pain can we handle the most? Ultimately, favour has to go to the Ford for its otherwise-impressive showing.

But we couldn’t help wishing we were at the wheel of a proper car – almost any new car – after nearly 700km in the Ranger and Colorado. Jack of all trades and master of none? At least they look cool.