It's time to embrace the best post-Ford Mazda that isn’t an MX-5 - the Mazda CX-9. The last time we were this pumped about a large SUV, it was 12 years ago, it wore a Territory badge, and it won Car of the Year.

It's time to embrace the best post-Ford Mazda that isn’t an MX-5 - the Mazda CX-9.

Since Mazda’s CX-5 kicked off the newly independent Japanese brand’s ‘SkyActiv’ model renaissance back in 2011, each proceeding model has earned widespread respect, if not universal acclaim, tempered mostly by persistent road-noise intrusion.

To Hiroshima’s credit, minor sound-suppression measures have been implemented with each respective facelift. But this second-generation Mazda CX-9 is a massive leap forward, finally breaking the noise, vibration, and harshness hex that has plagued Mazda for decades. It’s almost like driving with earmuffs on. 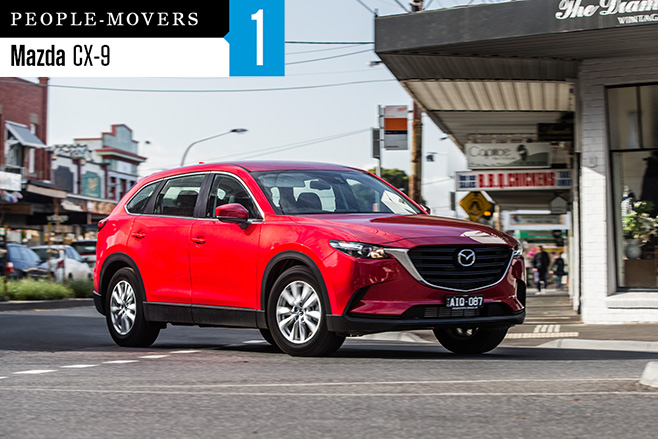 Yet this SUV makes the right noises in other areas. Consider, for example, a large and wide cabin offering a welcoming and quality environment. Supportive seats, a stylish dash, lovely steering wheel, classy instruments, tactile switchgear, abundant storage, and slim pillars for decent all-round vision all come through loud and clear.

While seats six and seven lack air vents, reading lights, and reclinable backrests, both offer adult-friendly accommodation (Mazda says it was designed to fit a pair of 170cm ‘Junior High’ kids). Beyond that, cargo capacity is ahead of this pack, but at 230 litres with all seats in use, the new CX-9 is 37 litres shy of its longer, heavier, and thirstier predecessor.

Quibbles are few, but they do include a weirdly oily and clammy dash-top finish, and an oversized centre console lid that fouls a wheel-twirling driver’s left elbow during fast cornering – something the CX-9’s deliciously limbre dynamics encourage. 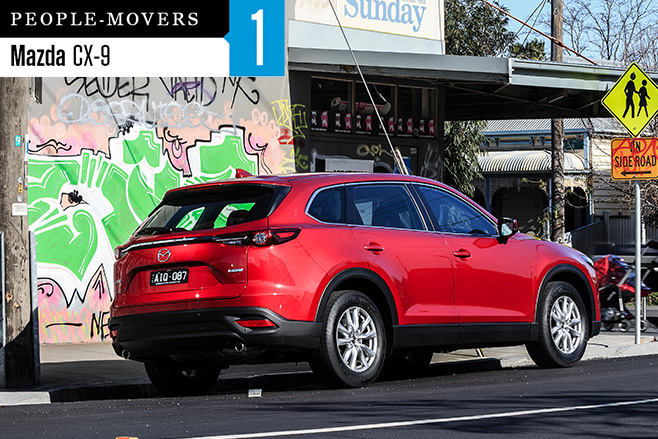 Dumping the old Ford-sourced V6 for a 70kg-lighter, seemingly less powerful 2.5-litre four-cylinder turbo might sound like a recipe for high-strung lag, but the 420Nm torque peak arrives at a lowly 2000rpm. And if you put 98 octane in it, Mazda’s boosted SkyActiv-G will give you 186kW instead of a modest 170.

Combined with alert gearing, the CX-9 is quick off the mark and strong on throttle response, for punchy point-to-point performance. At 7.7sec to 100km/h, it concedes nothing to the other’s six-pot powertrains, yet real-world economy is up to 20 percent better in some cases.

Our 11.6L/100km average is impressive considering how eager everybody was to cane the CX-9 Sport. It’s that sort of car (sorry, SUV), thanks to precise yet fluid steering, agile and controlled handling, and pleasingly supple suspension compliance. Even on low-grip tyres, the driver feels connected and the CX-9 feels planted, without the usual punishing ride compromises. This is real progress. The only worry is a soft brake-pedal reaction, which at higher speeds requires a hefty shove before full stopping force is applied. 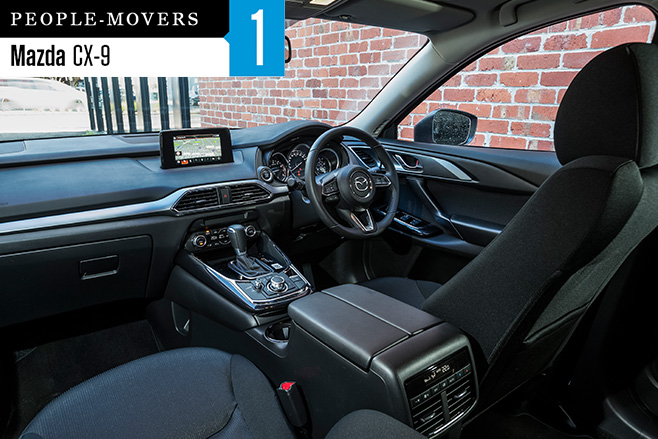 Still, this is the only SUV with core dynamic DNA, not tacked-on sportiness like in the overly firm Santa Fe. Additionally, it leads with standard Autonomous Emergency Braking, blind-spot monitoring, Rear Cross Traffic Alert, brake-energy regeneration and stop/start tech, upping the $42K Sport’s value quotient when a reverse camera, sat-nav, three-zone climate, and push-button start are also factored in.

The last time we were this pumped about a large SUV, it was 12 years ago, it wore a Territory badge, and it won Car of the Year. Ironically, then, the CX-9 is that dying Aussie Ford’s spiritual successor, and the first SUV to evolve what the Ford Territory started.

This TC-series CX-9’s SkyActiv chassis is actually a generation 1.5 evolution of the CX-5’s, with 24kg instead of 7.5kg of sound insulation, as well as a significantly thicker-steeled floorpan, to help cut NVH pathways.

Also helping out is a 65 percent torsionally stiffer body with more high-tensile steel (compared to the old CX-9), tighter panel gaps, improved aerodynamics, better sealing, and thicker glass. Result? On coarse roads at 100km/h, there is a 2.5dB noise cut.