WE GET our first fast blast in the all-new Vantage that highlights some serious steps up for Aston Martin.

The replacement for Astons cash cow. Despite a $60,000 price increase over the previous Vantage, the 2018 model is still the company’s most affordable car but it has to appeal to potential customers with a lot more than just a dollar sticker.

For the next generation, the Vantage brings a turbo V8 in place of atmo bent eight power courtesy of Mercedes-AMG and just about the only thing it has in common with its predecessor is the name and that winged badge on the bonnet.

Aston Martin is unlikely to ever offer a ‘volume’ seller but the previous Vantage sold 25,000 units over its lifecycle making it easily the most popular model. The new one will need to earn its keep and maintain strong sales if the company is to fund its planned expansion into new territory, including the DBX SUV.

The new Vantage shares some of the mechanicals of the Mercedes-AMG GT and a first blast in Portugal should reveal if the Brit is significantly different from its German cousin to enjoy enough breathing space in the high-end sportscar world. No high-end sportscar review would be comprehensive without a direct comparison to the consistently unbeatable Porsche 911 and, in the case of Aston Martin’s latest metal, the German still reigns supreme, but only just. The Brit can’t quite match the 911’s lightness and deft approach to demolishing B-roads, but the Vantage does bring a significant skill set to the party.

Its German DNA is a massive shot in the arm for both the Vantage model and entire Aston brand. A monstrous V8 that sounds as vicious as its performance and hugely enjoyable road manners that reward track and road driving will doubtless attract new faces to the showrooms as well as existing fans.

Handing back a complete Vantage with all its parts still attached and functioning is also a virtue the brand has not always been able to brag, especially after a full day of punishment. 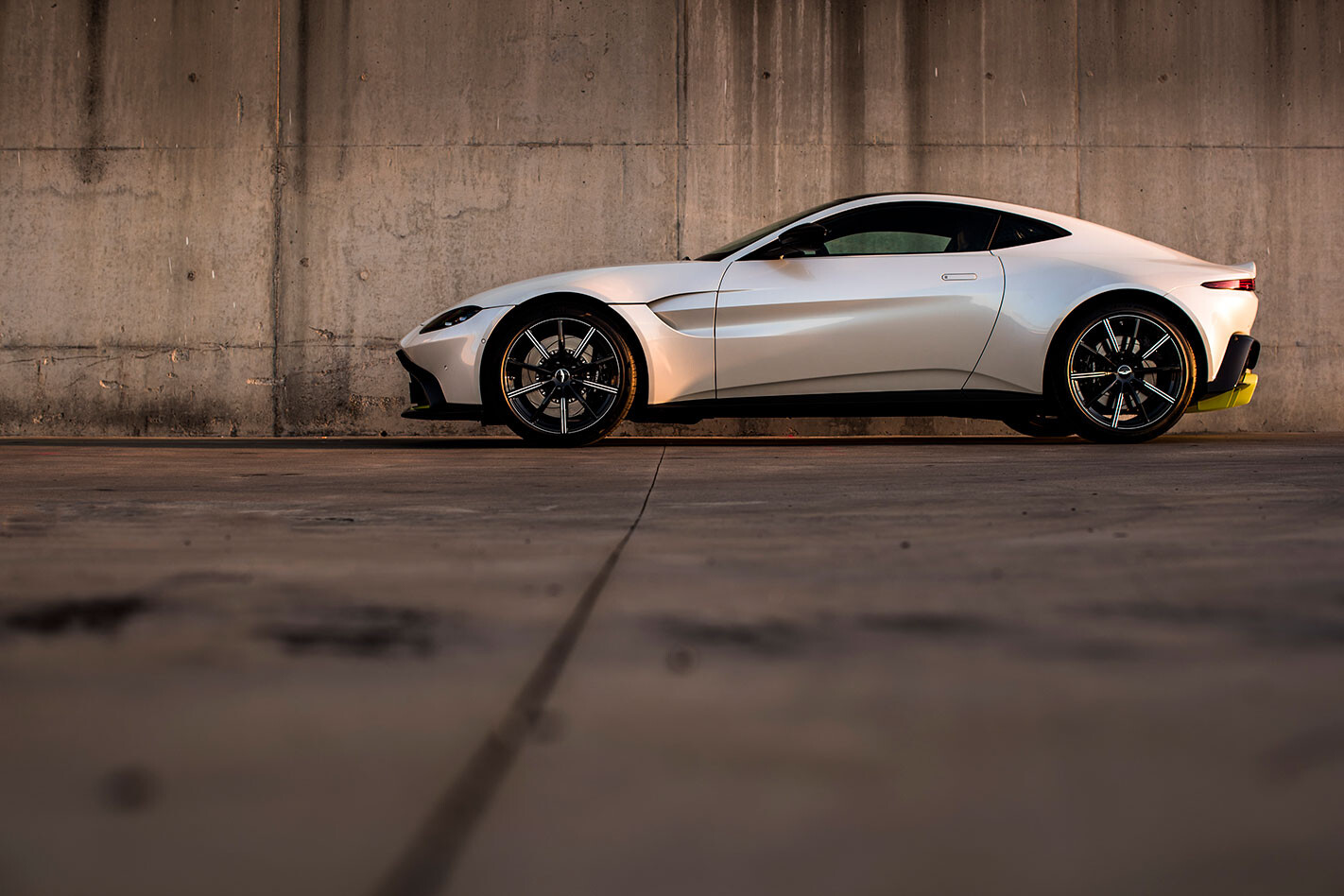 NOT long ago, Aston Martin was placing different badges on two different cars created shortly after God invented the wheel. Thankfully boss Andy Palmer has given the place a kick up the backside during three years in charge: lately we’ve had the DB11, DB4 GT Continuation, the introduction of V8 AMG power, and there’s a DBX crossover, an all-electric Lagonda, Newey’s Valkyrie hypercar, and two other mid-engined supercars coming too.

The new Vantage is arguably the most important. It replaces Aston’s most affordable, biggest-selling sports car, a model that shifted 25,000 units in its previous incarnation. We’ve got a day to get under the Brit’s skin, first on Portuguese mountain roads, then the epic Portimao race circuit.

The Vantage is an all-new car versus its predecessor, but its pricing represents a more fundamental shift: the old car was comparable to 911 Carrera S money, where the new one jumps $60K to cost $299,950 – slightly pricier than even the Carrera GTS. Performance with the latter is lineball: the Vantage produces 375kW, hits 100km/h in 3.6 seconds, and goes on to 314km/h.

Despite the Vantage’s newness, its steel bodywork looks familiar – the long-nose/sawn-off-tail proportions are true-to-template, and the one-off, Vantage-based DB10 driven by Bond in Spectre laid the groundwork. It’s a properly seductive thing to behold, with a steel body stretched taut over 20-inch alloys – cast as standard, forged as an option to save 10kg – like a tight T-shirt with ironed-in creases. 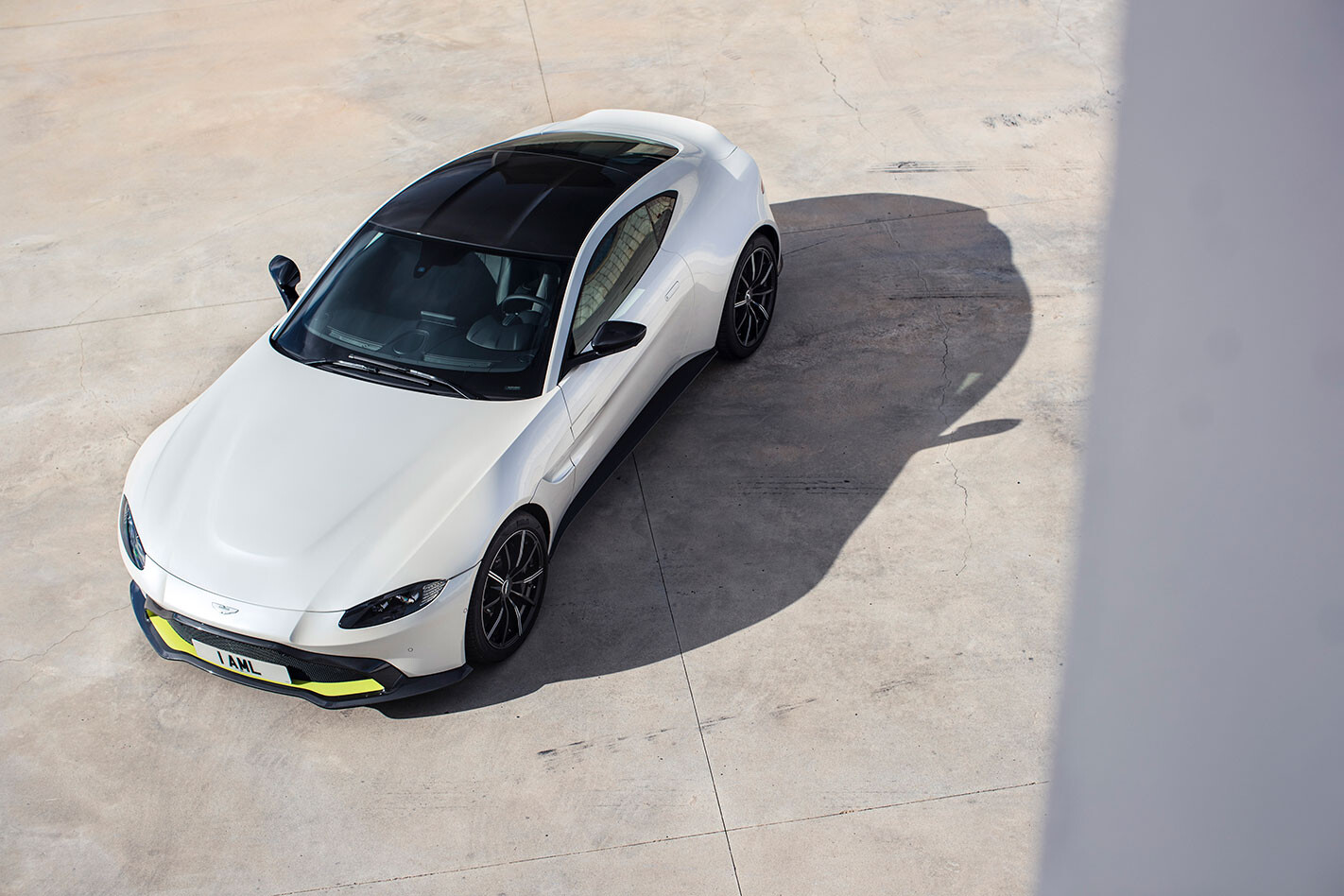 The Vantage rides on an evolution of the bonded aluminium chassis introduced with DB11, although Aston says there’s only 30 percent commonality. There’s carryover double-wishbone front and multi-link rear suspension, the same track widths, though naturally the tuning of springs and adaptive dampers is different, plus there’s a solidly mounted rear subframe where the DB11 gets comfort-focused bushings. The Vantage is also the first Aston with an electronically controlled LSD.

The low-slung nose – “like it’s sniffing out the scent, closing on the car ahead,” enthuses designer Miles Nurnberger (“like an MX-5,” says the internet) makes it clear that the engine is front-mid-mounted. The 4.0-litre twin-turbo V8 comes from Mercedes-AMG, makes 375kW and 685Nm, and clears its throat with a roar that’d empty the Savannah. The optional sports exhaust needs solitary confinement at the zoo, though thankfully there is a don’t-wake-the-neighbours button.

Mercedes uses a multi-clutch automatic transmission in the highly comparable AMG GT, but Aston has gone for a conventional torque-convertor eight-speed auto located as a transaxle between the rear wheels. All this helps to deliver weight distribution said to be 50/50. 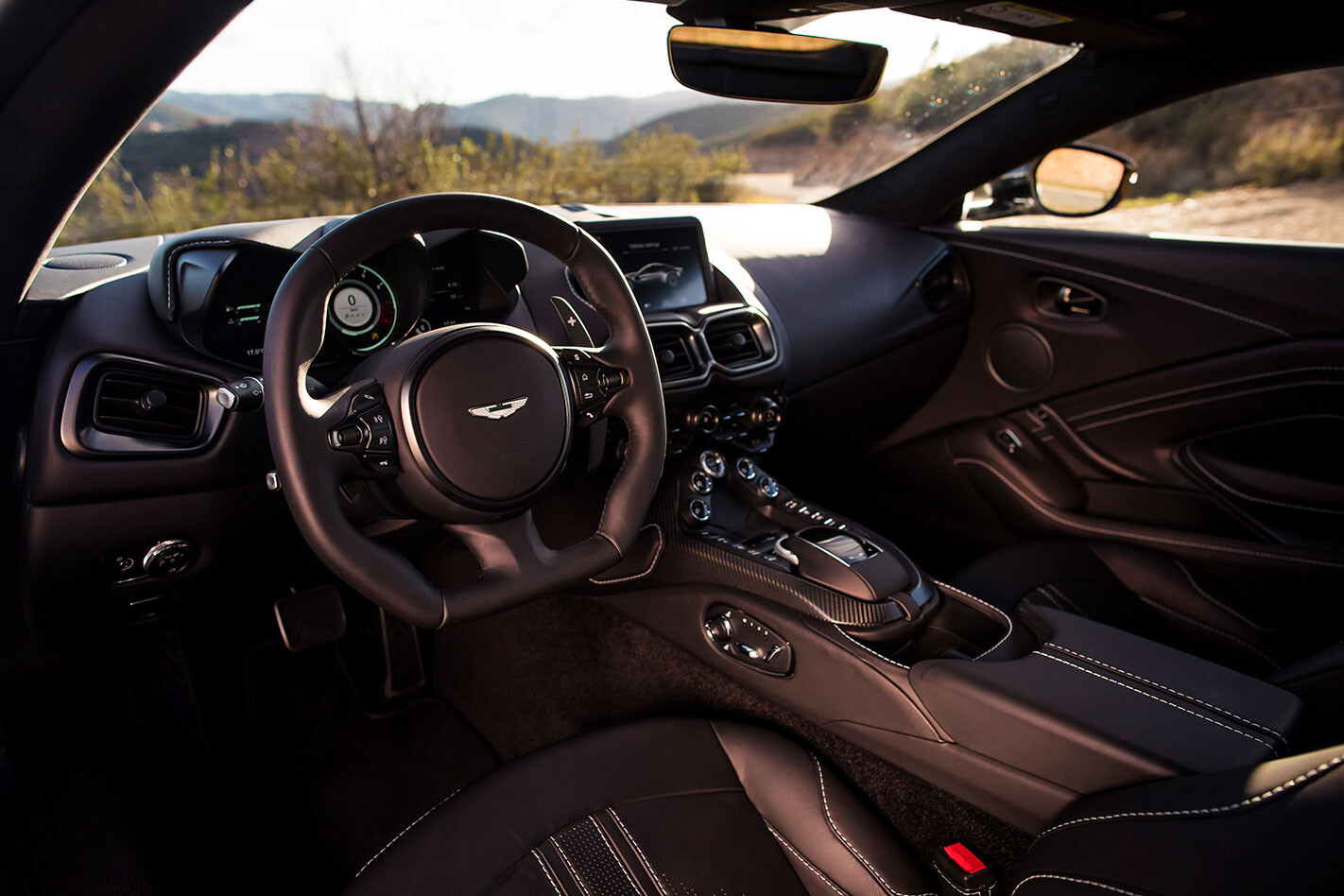 The interior quickly sets the mood for an engaging drive. The windscreen races over your head like a low-flying jet, the side windows are so hot-rod slitty I have to turn my large head sideways to poke it out, and you sit low down in seats that grip you snugly but comfortably, especially the optional sports seats trimmed in Alcantara.

Only pro-basketball players would grumble about the room offered – it’s ample for the rest of us – and mostly it’s a suitably exciting, nicely furnished environment, with Mercedes infotainment meaning you no longer punch your fist through the dash in frustration. Shame the air-con controls and paddle-shifters that are fixed to the column look cheap, especially when finished in silver – the darker graphite looks better – and the buttons are sprayed a little randomly.

The best sports cars immediately put you at ease and at the centre of the action, even at low speeds, and so it is with the Vantage. The low, bang-between-the-axles seating position is key, so too steering that has a chunky-yet-friendly heft, and is defined by less free-play than a juvenile detention centre.

String together a few mountain bends and the Vantage comes alive, with a turn-in response that’s rare in its energy for a front-engined car. That’s complemented by the ability to carry huge lateral G with only the occasional whiff of understeer, progressive and extremely well-controlled bodyroll, and reassuringly meaty brakes. 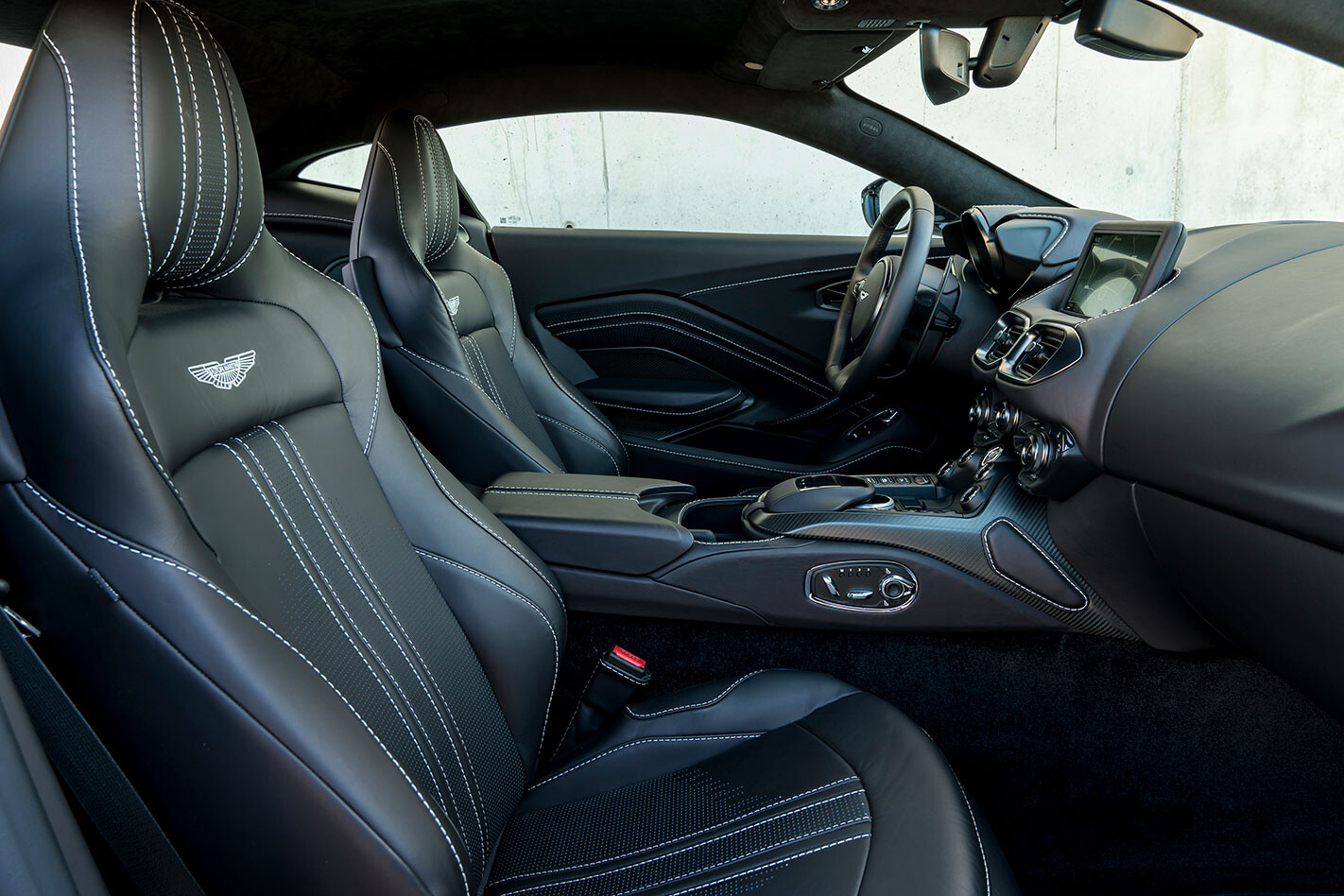 The steering is no faster than the DB11’s, but feels more responsive because the wheelbase is 99mm shorter. It’s an incredibly involving drive, even if some might find the suspension’s vertical movements a little abruptly curtailed, and the road noise on a motorway OTT. Perhaps more pertinent is that a 911 feels the purer, lighter machine, and that the Vantage could add a little more fizz to its communication skills, both through fingertips and the seat of your pants. But it’s a ball of fun to chuck over a great road.

Performance feels much stronger than the DB11, not only because the Vantage is 129kg fleeter, but because the final-drive ratio drops from 2.7:1 to 2.9:1. It pulls like James Bond in a casino from low revs, bounds forward with huge enthusiasm given even the lightest toe-twitch, and runs so hard for 7000rpm that drag barely registers.

Like the engine, the gearbox is a big step on from the old nodding-dog automated manual. It does the about-town stuff with the loungey ease you’d expect of a torque converter, but punches in changes with more authority than the DB11, especially in Track mode – which perhaps goes too far in proving that point. Some might prefer paddles fixed to the wheel, but boldly claim you prefer them on the steering column because you need to know where the paddle is when you’re opposite-locking and need fourth gear. Then invite any doubters for a passenger lap at Portimao.

This circuit might only be a decade old, but it’s already renowned as one of Europe’s best, with rollercoaster dips, blind crests and braking zones to pop your eyes out. The Vantage feels right at home. There’s no doubt that a mid-engined car would be more agile still, but that appetite for the apex is still there, and while the greater speed and space means you can find understeer in the slower turns, it’s well managed and provides a clear feel for the limits.

That V8 still feels quick too, even on a track this relentless. We tested cast-iron stoppers on the road, which worked well, but the track cars’ optional carbon-ceramic brakes combine strong pedal feel with the ability to compress braking distances into a space to baffle Neil deGrasse Tyson.

There is a lateral bobbing about on the rear axle when you’re fully loaded up through a fast corner, and you have to be quick with the steering and confident with the throttle if you’re intentionally sliding about, but drive it fast and hard and the Vantage feels nicely balanced and easily adjustable. There’s one particular turn at Portimao where it really shines, the fast downhill turn eight – as you tip it in it takes on just a bit of oversteer and drifts right through – not lairy, just very sweetly balanced and intuitive.

Aston let us pound that car for 20 minutes with an instructor, then 20 minutes on our own, equivalent to quali and a race in many championships. The brakes stayed firm, the warning lights stayed off, and as confidence grew we pushed harder and harder, running the track limits as close as we dared.

The Vantage was always ready to step up with us, and only the tyres wilted under the punishment. And when they put more on we found an excuse to sneak out for more. Not perfect this new Vantage, but it’s damn good.