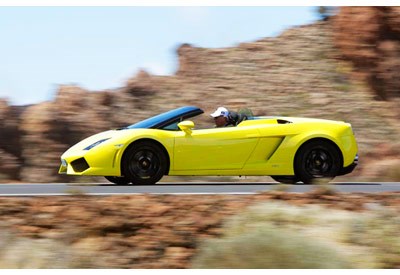 For better or worse, Lamborghinis have an edge that is rather sharper than Ferraris. You can see it in their exterior designs, and things happen--ride motions, throttle response, etc--with more firmness. Lambo has honed that edge a bit finer with the LP 560-4 Spyder.

The Italian exotic car maker launched the Spyder version of its Gallardo LP 560-4 at the 2008 Los Angeles Auto Show and we've had the chance to drive it on the island of Tenerife, one of the Canary Islands.

While the power numbers are up, CO2 and fuel consumption have been cut some 18 percent, the latter to a combined 14 l/100 km.

A manual 6-speed is the standard gearbox, while our test car had the optional e-gear "manual automatic."What Lambo fans really want to know, of course, is that 0-100 km/h number, which is a mere 4.0 seconds. Top speed? 324 km/h.

We couldn't test that latter number, but happily went after the former on a drive up the Tiede volcano. There are suspension mods to go with the added power, a general firming front and rear, with an added link and new anti-roll bar at the back. Combine the changes with the Gallardo's all-wheel drive and result, in non-technical terms, is still more sure-footedness.

Even Lamborghini refers to this as "intense road holding," and it's quite impressive as you tuck the car into turns that cut back and forth across a mountain face. Mind you, there's a penalty in ride on rough surfaces, but arguably worth the payment.

Lambo has reworked the front and rear exterior designs for the LP 540-4. The air intakes at the ends of the face are more aggressive and now flank a low spoiler. New taillights are smaller and above a full-width grille, a layout that, in general, makes the back of the car look wider and lower.

The soft top glides from open to closed or the reverse in just 20 seconds.

It's interesting how different the Gallardo is than Ferrari's F430...less subtle than the Maranello machine and a bit rawer for a more aggressive character.

How do you say, "in your face" in Italian? 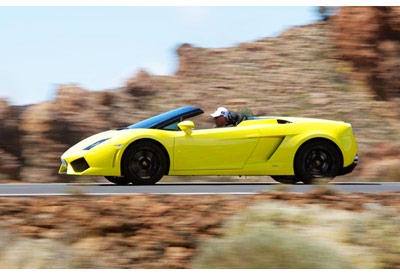 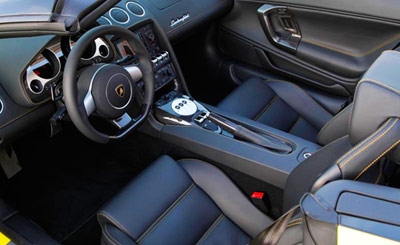 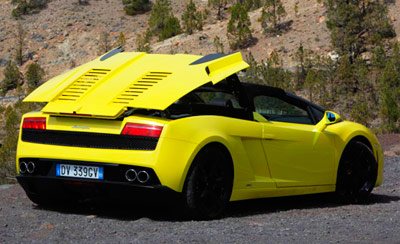