THE bump and following so-slight dip are not visible to the eye. On the outside of the track, at the point immediately above the tunnel that connects Pista di Fiorano with the road to the world, the bump – the only one on the super-smooth circuit, test ground to generations of Ferrari F1 and road cars – is now, suddenly, an issue. In previous models, even those as fast as the Enzo, the bump was no more than a trivial touch, felt momentarily and ignored.

Not in LaFerrari. Slide out of the sweeping right-hand hairpin, power nailed in second, tacho fleetingly hitting the 9250rpm cut-out, snatch third on the uphill climb, belting to 160km/h at 8000rpm-plus, Ferrari’s extraordinary new supercar lifts over the tiny rise. Momentarily elevated above the road, it flies. The kick, so quick, the time too rapid for the revs to soar further and the rear wheels to spin up, I begin to doubt my perception. No time for analysis before the next right-hander looms large.

They told me later, smiling, “Yes, you are right”. Seems that, if you’re on the right line, you now really do feel the bump and, if you are going fast enough, the car lifts, maybe just 20mm clear of the track, but off the ground.

At the end of a great day, I’d wanted three more fast laps. The French TV crew was finished and there was time enough before the track was closed.

As I was strapped in, I worried that too often it’s at times like this, late in the afternoon, confidence high after plenty of wheel time, that mistakes are made and people crash on the indulgence laps. Caution ignored, I went out and found that bump.

LaFerrari redefines speed, even by Ferrari’s lofty standards (though I’ve not driven a Porsche 918 or McLaren P1).

Some simple numbers perfectly illustrate the staggering upsurge in performance: 0-200km/h in 7.0 seconds, 2.5sec quicker than the Enzo; braking from 200km/h to zero is cut to 116 metres, 30m shorter; and a Fiorano lap time of 1min19sec, a truly incredible 6.3seconds faster than Maranello’s previous supercar. The LF makes the F1 McLaren, my previous benchmark, look somehow slow.

Believe me, LaFerrari is terrifyingly quick, a missile. Yet it’s also useable and amazingly easy to meander among the Fiats in suburban Maranello, dual-clutch transmission in auto.

On the pace, though, everything shifts to fast-forward and you wonder if Ferrari should teach all 499 buyers (Ferrari boss Luca Montezemolo swears they could sell twice that number) how to drive the thing properly. Tap its vast potential and it demands a huge level of skill and immense car control that’s way beyond my ability.

Ferrari shot a video of F1 racer Kimi Raikkonen at Fiorano, the LaFerrari looking out of control, sliding on every corner, flames spitting out of the exhaust pipes, until the inevitable spin on to the grass.

Matteo Lanzavecchia, who’s in charge of vehicle performance, likes to compare the car to the Enzo: “If you drive an Enzo and you drive LaFerrari, if you are in the same gear, you will have double the level of acceleration. And you will reach it in one-third the time when you go on the throttle. You will feel how safe it is and it needs 45 percent less steering input than the Enzo, which makes it much easier to control coming out of corners.”

LaFerrari displays a welcome rethink of the conventional supercar layout. Franco Cimatti, the creative engineer behind the LaFerrari concept, planned the car’s architecture around its seating position. His original idea was to lay the driver down into an almost F1-like recline, but he found that 32 degrees is as far as you can recline before the front neck muscles compress and breathing becomes difficult.

The driver sits 60mm lower than in the Enzo and the centre of gravity – one key to the car’s stability – is a massive 75mm lower.  “If you get the physics right, everything else falls into place,” Cimatti says. “A low centre of gravity is key.”

The cabin has only the space needed for a driver and passenger; no more, no less. This permits a far narrower glasshouse (for less frontal area) and room for the aerodynamics and the demands of cooling the powertrain – a 6.3-litre V12, plus electric and the batteries and gearbox – along the flanks.

Cutaway sills, way inboard of the car’s flanks, make ingress/egress brilliantly easy and leave the front wheels exposed, as if they are separate from the body.

The scissor-style doors open like wings. “Our doors are hinged from above, and we have no conventional door posts to get in the way,” Cimatti says.

The result is a surprisingly large aperture. The doors are easy to open, despite sitting so low. Initially you push outwards using the elbows, and then up.

The radical driving position means you sit in a padded area of the carbon tub, not in a separate, adjustable seat because that can flex and disturb the driver-machine connection.

Instead, the pedal box moves on a sprung handle and the steering wheel is adjustable for height and reach.  Owners get tailor-made padding.

The steering wheel is standard Ferrari 458, but oddly quadrate in shape and with too many controls. The dash readouts are all new, full TFT and riddled with information.

Twist the red key, push the red start button on the wheel and the 6.3-litre V12 instantly ignites. Foot on brake, pull the right-side carbon-fibre paddle, foot on throttle, and it moves easily, fluently. There’s no sound insulation, only the intoxicating rrrraaappp of the V12, with no hint of the electric hybrid drivetrain.

My first stint at the wheel is on Fiorano, the ideal way to learn such a powerful car. Building speed and confidence, the LF feels utterly relentless, instantly responsive, the hybrid system adding more low-end torque so that throttle responses, on and off, are instant, almost brutal.

While you don’t hear any of the aero elements moving under the sound of the engine, you certainly feel their effects, whether under braking – the pedal travel so short yet so linear and progressive – or in corners.

As well as mechanical grip, this car also has aero grip and up to eight-tenths it’s a dream drive. The steering is light, accurate and linear, yet lacking true feel, and it’s surprisingly low-geared, despite just 1.9 turns lock to lock.

Even in Race, the recommended mode, the car’s attitude is adjustable on the throttle. Turning off the electronic safety net transforms the car into a tyre-shredding oversteerer covered by a haze of blue smoke. It’s fun for the camera, adrenaline at the redline, but ultimately not as fast or as satisfying as Race mode, with the electronic traction helpers controlling the dynamics.

The car stays flat, even on rough surfaces. Select ‘bumpy road’ mode and the ride is astonishingly good on the street.

This car is a work of genius – beautiful, efficient, fast beyond belief, a sensory experience. 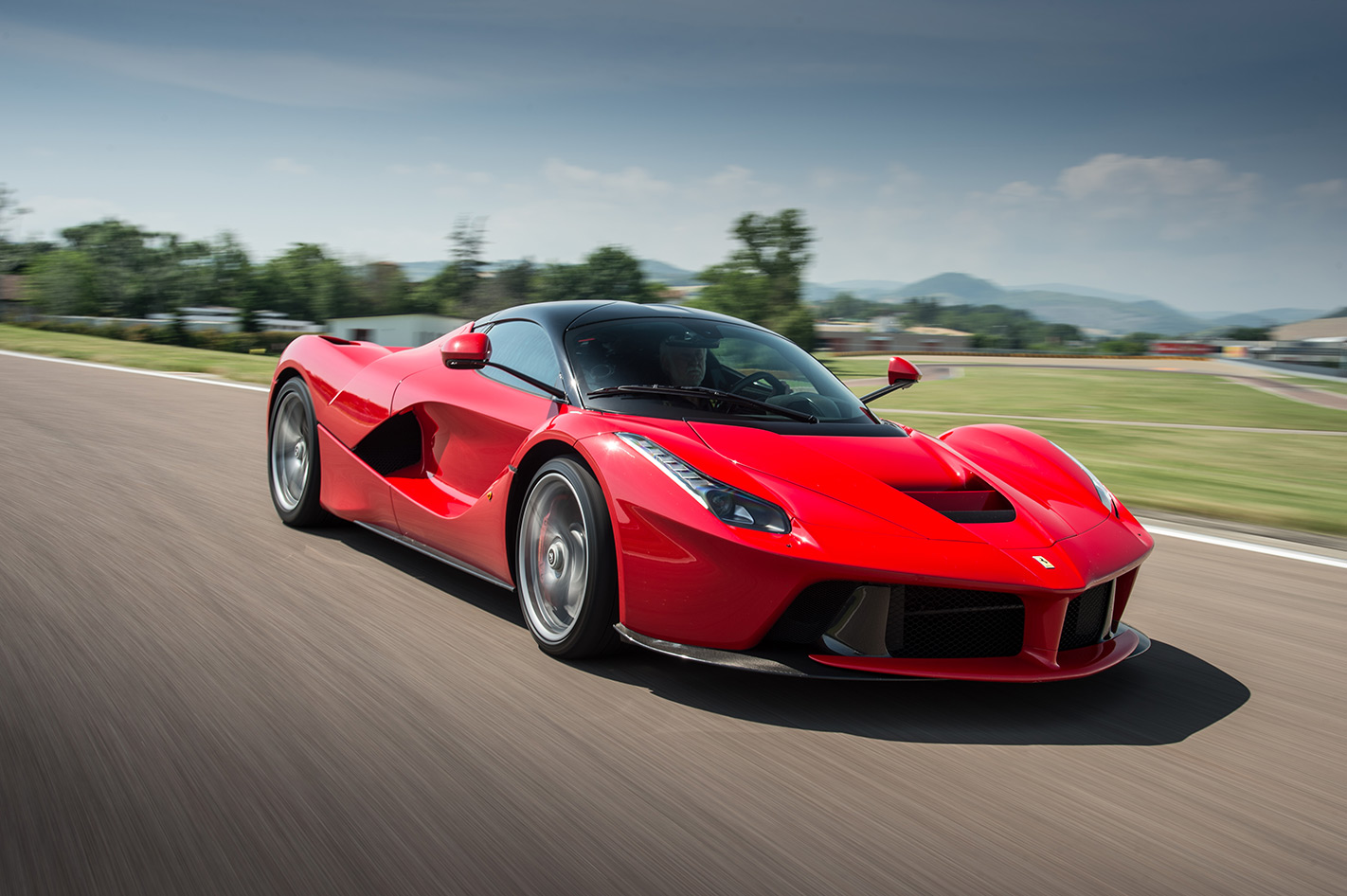 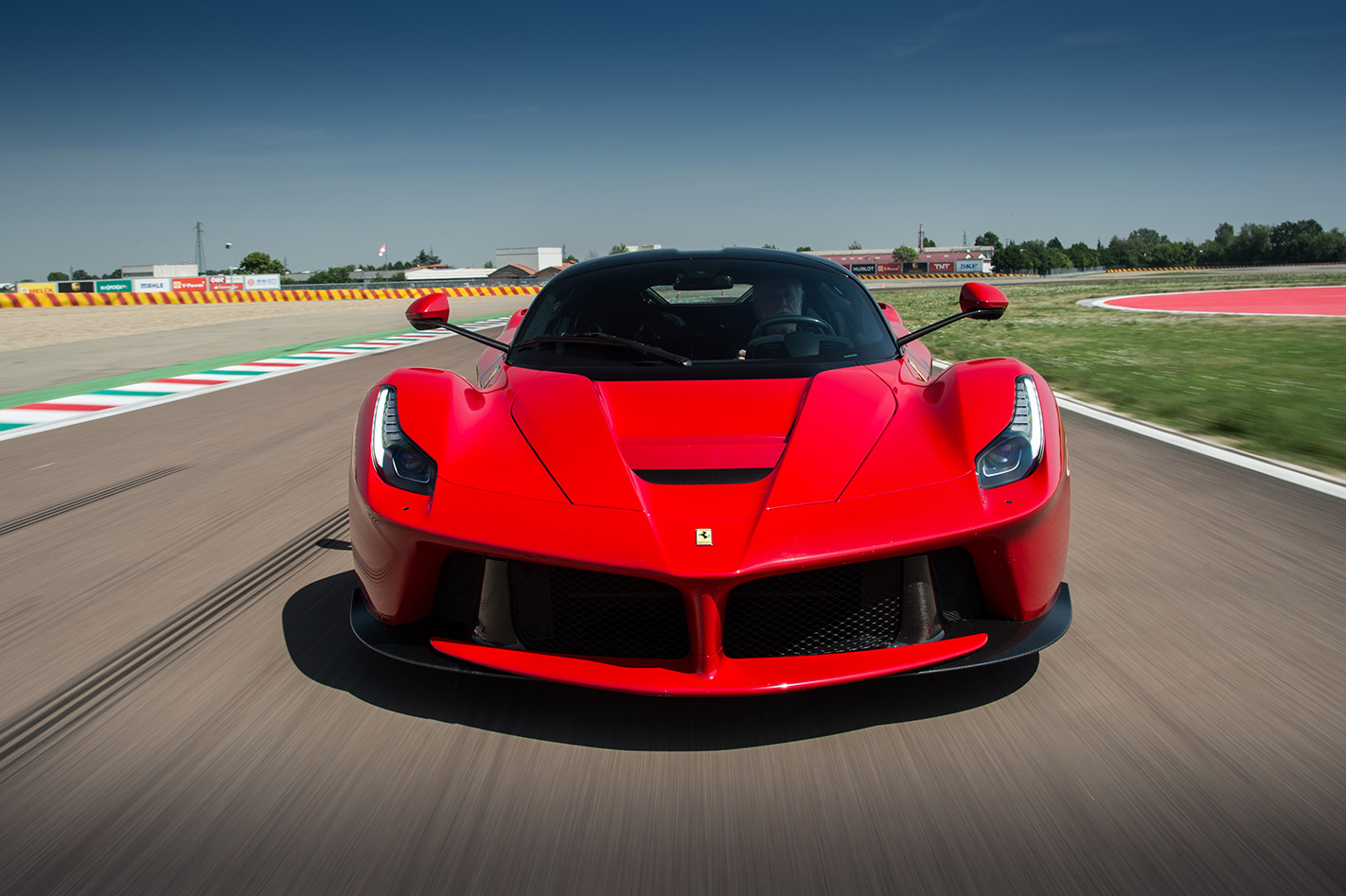 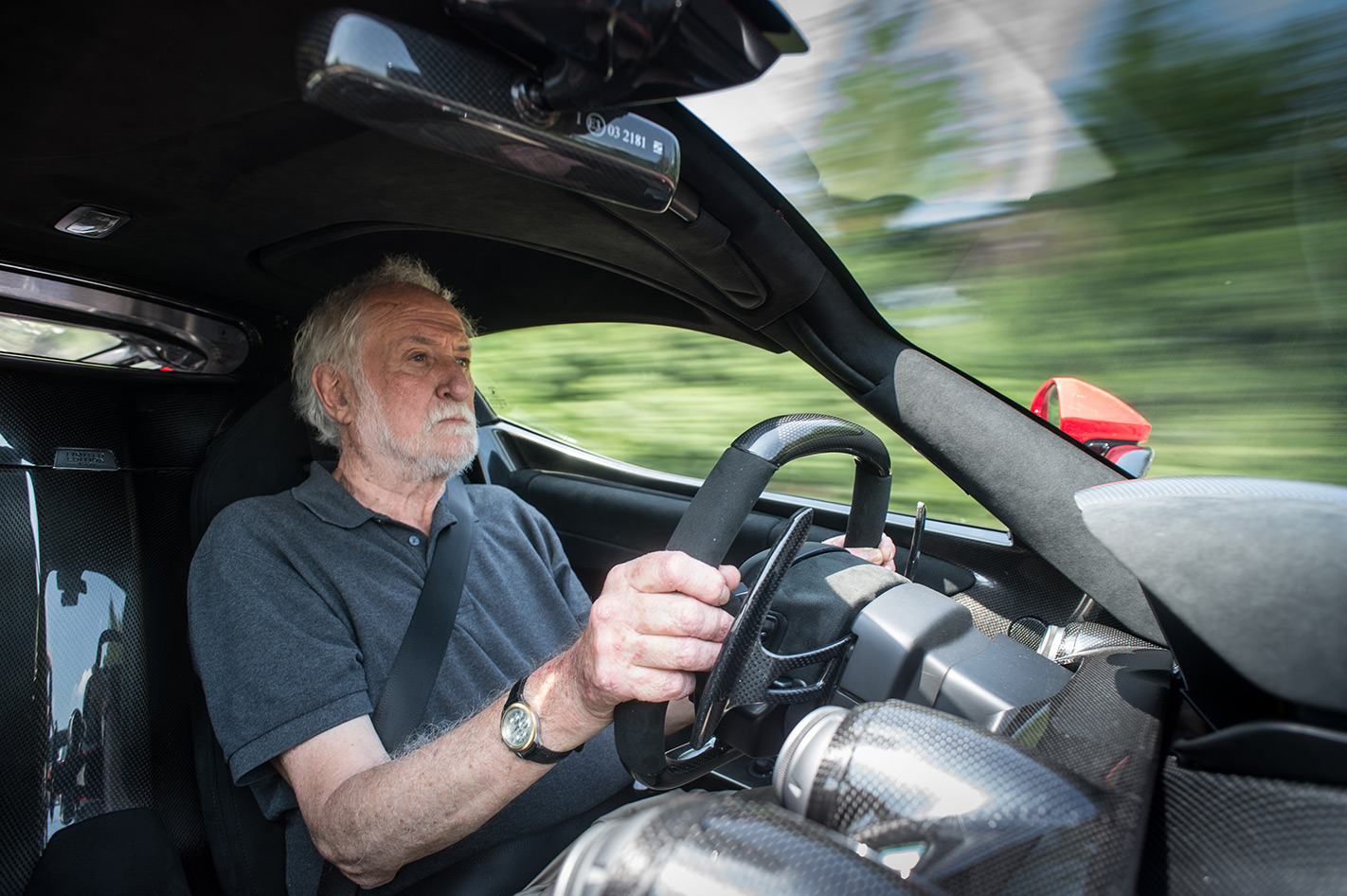 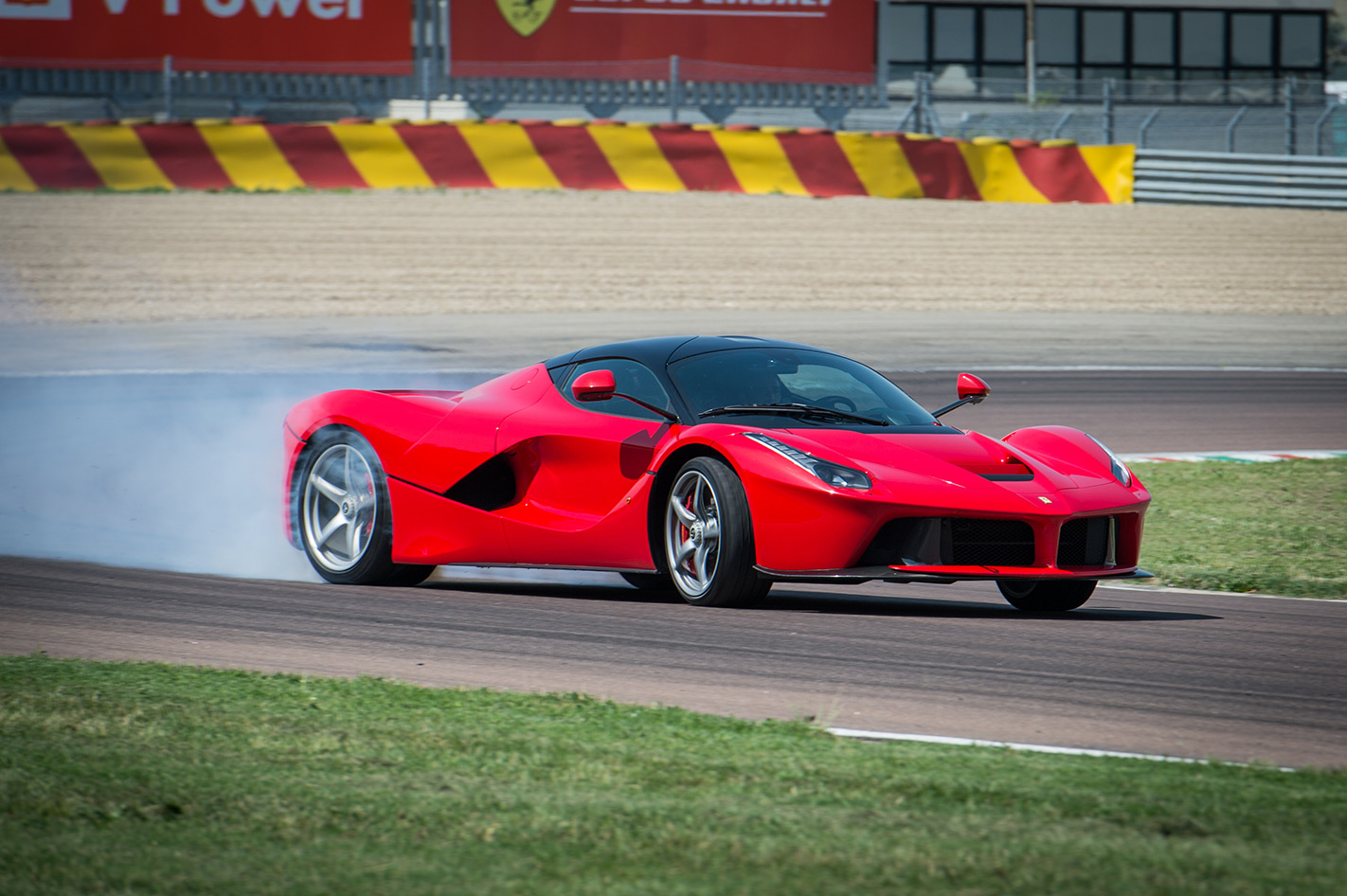 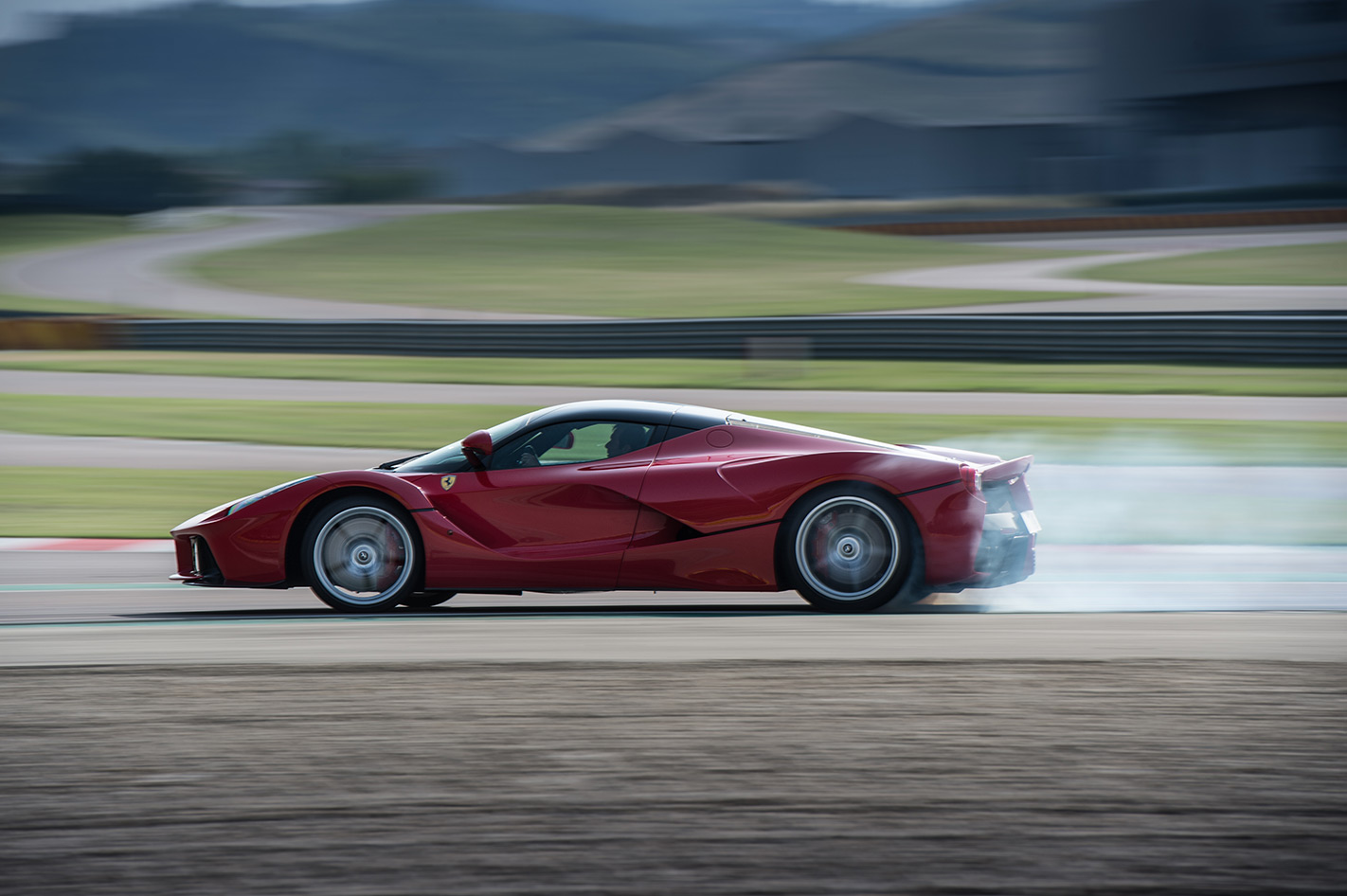