WITH the imminent launch of this new-generation 2, Mazda’s SkyActiv portfolio has grown to four models, each one better than the last. Which makes this feisty, sophisticated little supermini the best expression yet of Mazda’s weight-conscious, naturally aspirated thinking.

The premium, fully optioned pre-production model we drove at Tokachi raceway in Hokkaido, Japan showcased just how grown up the little 2 has become.

At the top end, it’s loaded with features seldom offered in the next class up, let alone in the light-car segment. Stuff like radar-based cruise control, autonomous braking, rear cross-traffic alert, lane-departure warning, an idle-stop system and a first-in-class head-up instrument display.

If the top Australian model – continuing the Genki designation and due to go on sale in November – sticks to the bulging feature list of the Asian-market versions, we’ll also get the choice of five ‘Style Collection’ interior options that include white or black leather trim, and even one with bright red seat fabric. It’s a taste of Mini and Audi A1-style customisation at an everyman’s price point.

Inside, the all-new 2 is a striking departure from the previous model’s cheap-but-cheerful ambience.

Mazda has aimed for “refined beauty beyond the class” and, particularly up front, the 2 feels like it delivers more comfort than its big brother, the Mazda 3.

A great driving position – at last, featuring a telescopic steering column – and a superb, high-quality dashboard prepare you for a similarly polished driving experience.

The third-generation Mazda 2 might look similar to its hugely successful predecessor, but underneath its edgy bodywork is a thoroughly new car. Brand new front and rear suspension designs, new engines and compact all-new transmissions specific to the 2 headline this more mature but still fun-to-drive five-door hatchback.

Both are tuned to run on Australia’s regular 91-octane petrol, though the Singaporean-spec Mazda 2 Genki we drove in Japan ran a higher 14.0:1 compression ratio (13.0:1 for Aussie engines) and drank 95RON fuel, resulting in 85kW and 148Nm.

Given our experience with the same 91RON tuning on other Mazda models, expect the real-world performance difference to be negligible. Which means our six-speed auto range-topper will deliver solid torque, a free-revving top end (right to 6700rpm) and a sporty induction note that suits the 2’s eager handling.

The new SkyActiv six-speed auto is a ripper, too. Smooth and intuitive in regular drive mode, the 2’s auto introduces a ‘Sport’ function (via a toggle below the gearlever) that wakes up the shift calibration, holding gears when backing off and shifting down when braking hard.

The flagship 2 also scores steering-wheel paddles, attached to the same brilliant three-spoke leather wheel as the 3 and 6.

But the most grown-up aspect of the new Mazda 2 is the way it drives.

Riding on 185/60R16 Toyos, the 2 rode with quiet subtlety over the test track’s “real-world” road sections and, out on the very wet raceway, it cornered with unexpected confidence. Chassis balance and wet-surface grip were both impressive, as was the 2’s composure when lifting off mid-corner.

And all this with an Asian-market suspension tune. Australia’s will be slightly firmer for sharper steering response.

About the only area where the 2 doesn’t shine is in its rear compartment.

The seat itself is quite comfortable, but in prioritising the front-seat package (including taller seats for greater shoulder support), adults in the rear find themselves staring at the front headrests. And there are no roof grab handles, door bins or drink holders anywhere. Just a single left-seat map pocket.

Room is class-competitive, though, despite slight reductions in front and rear headroom and legroom, and a 30mm drop in rear shoulder room.

On paper, boot space is an unremarkable 220 litres, though in reality it’s quite deep (with a space-saver spare underneath) and highly useable for a supermini.

So, with more than one eye on Europe, Mazda’s benchmark-challenging new 2 looks set to smash the popularity of its well-liked predecessor.

When it launches here in November, expect to see Neo, Maxx and Genki grades, each with six-speed manual and six-speed automatic options.

And a proper sports version is in the pipeline – likely to feature a turbocharger and wear an MPS badge. Given the promise of the standard car, we can’t wait! 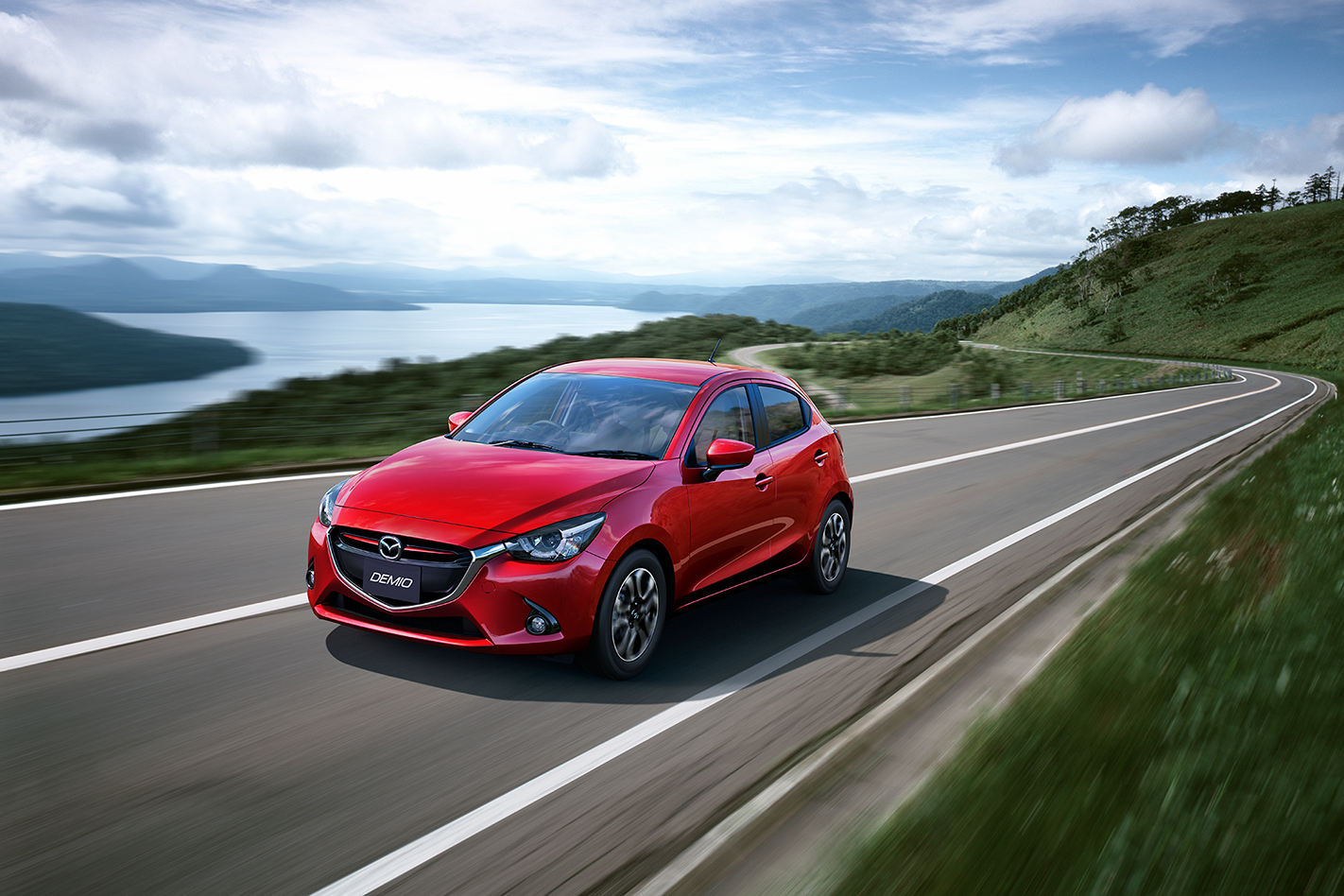 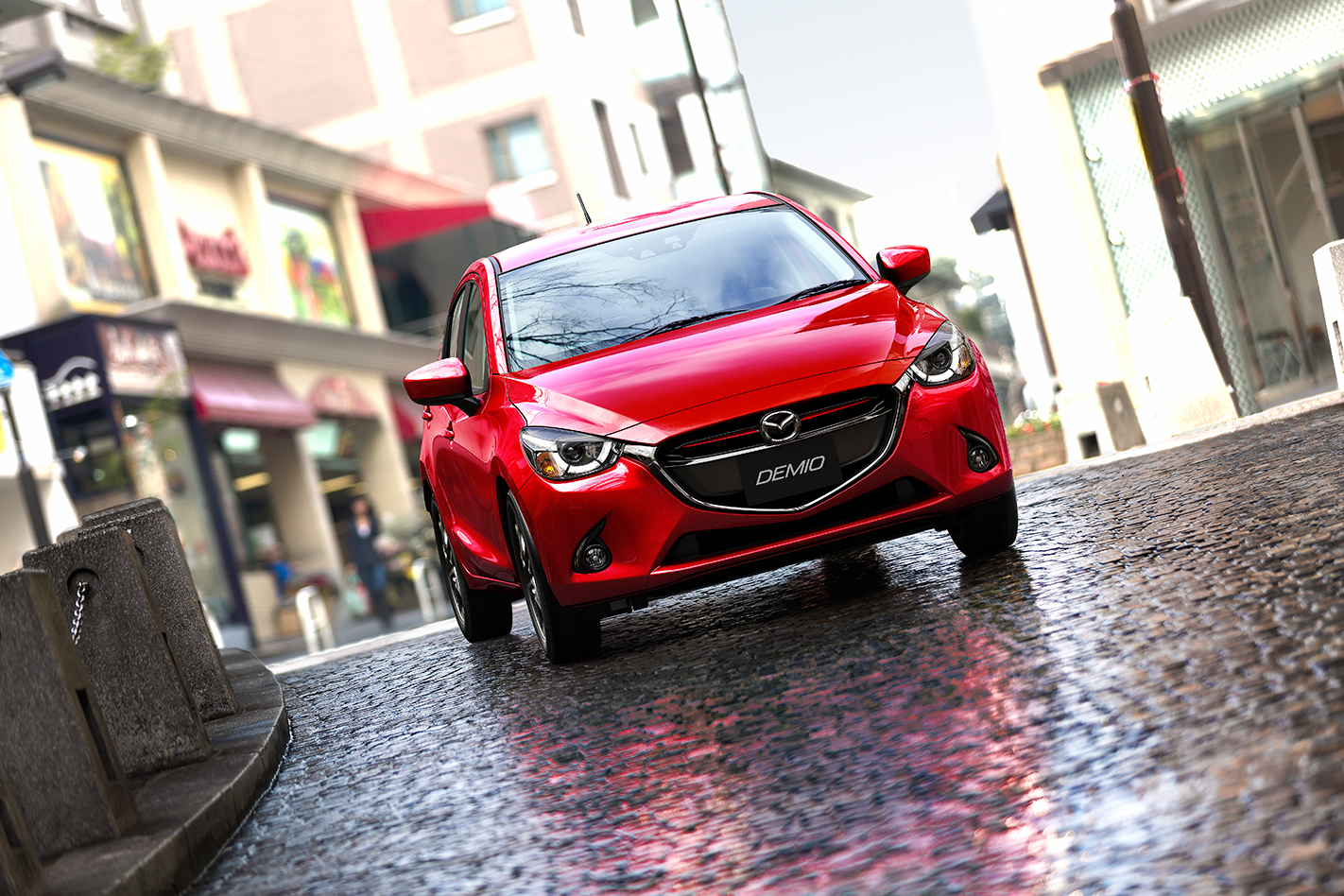 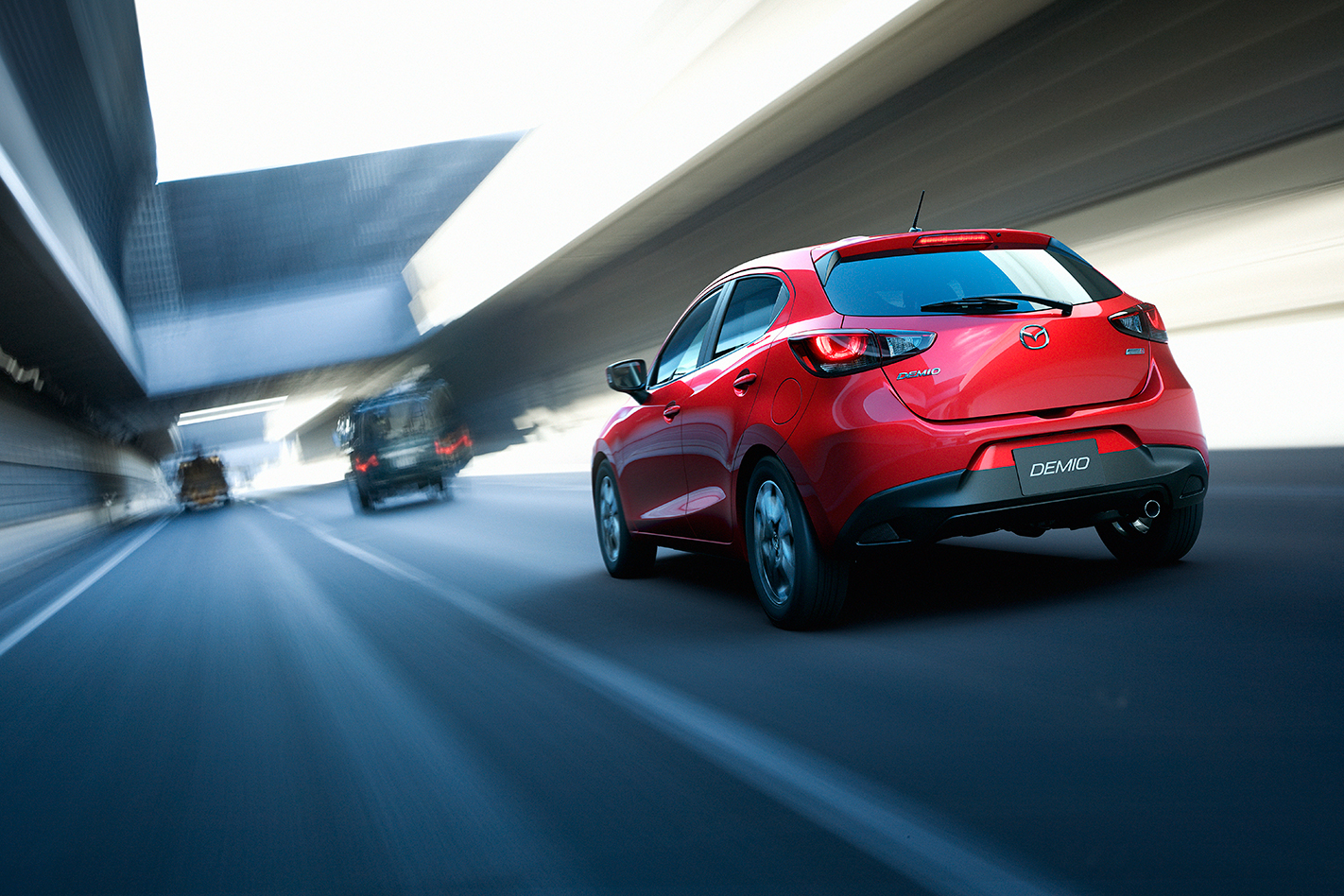 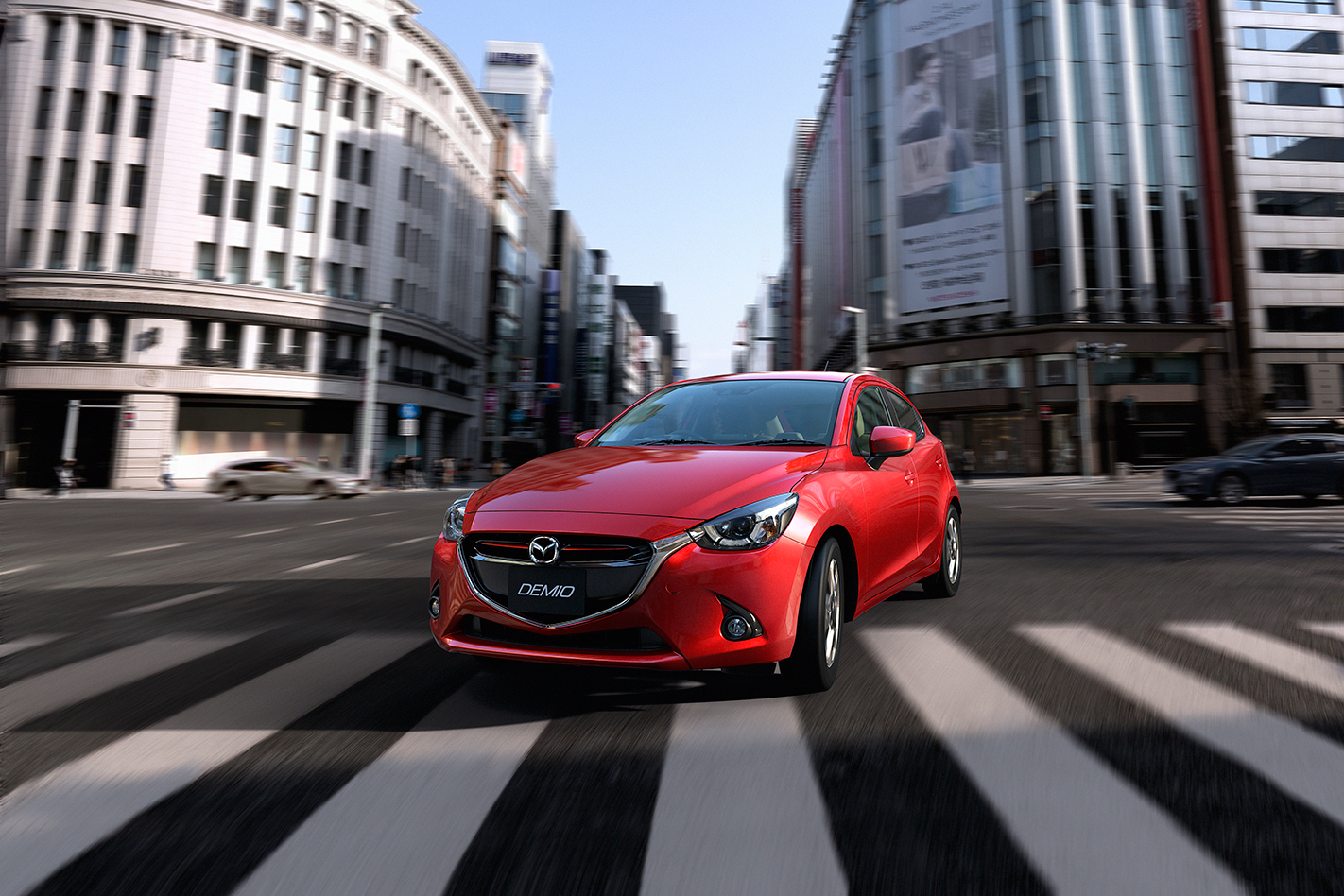 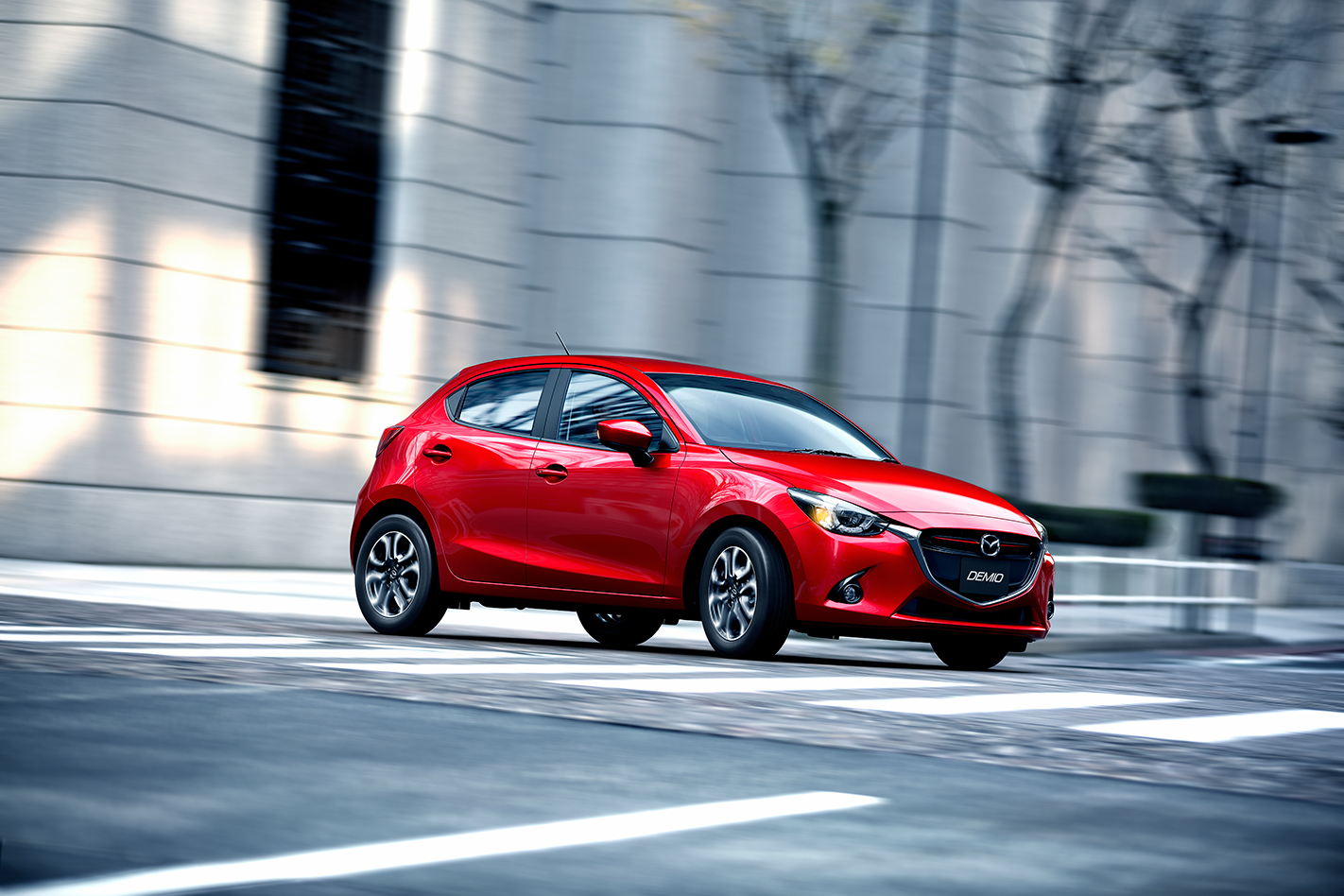 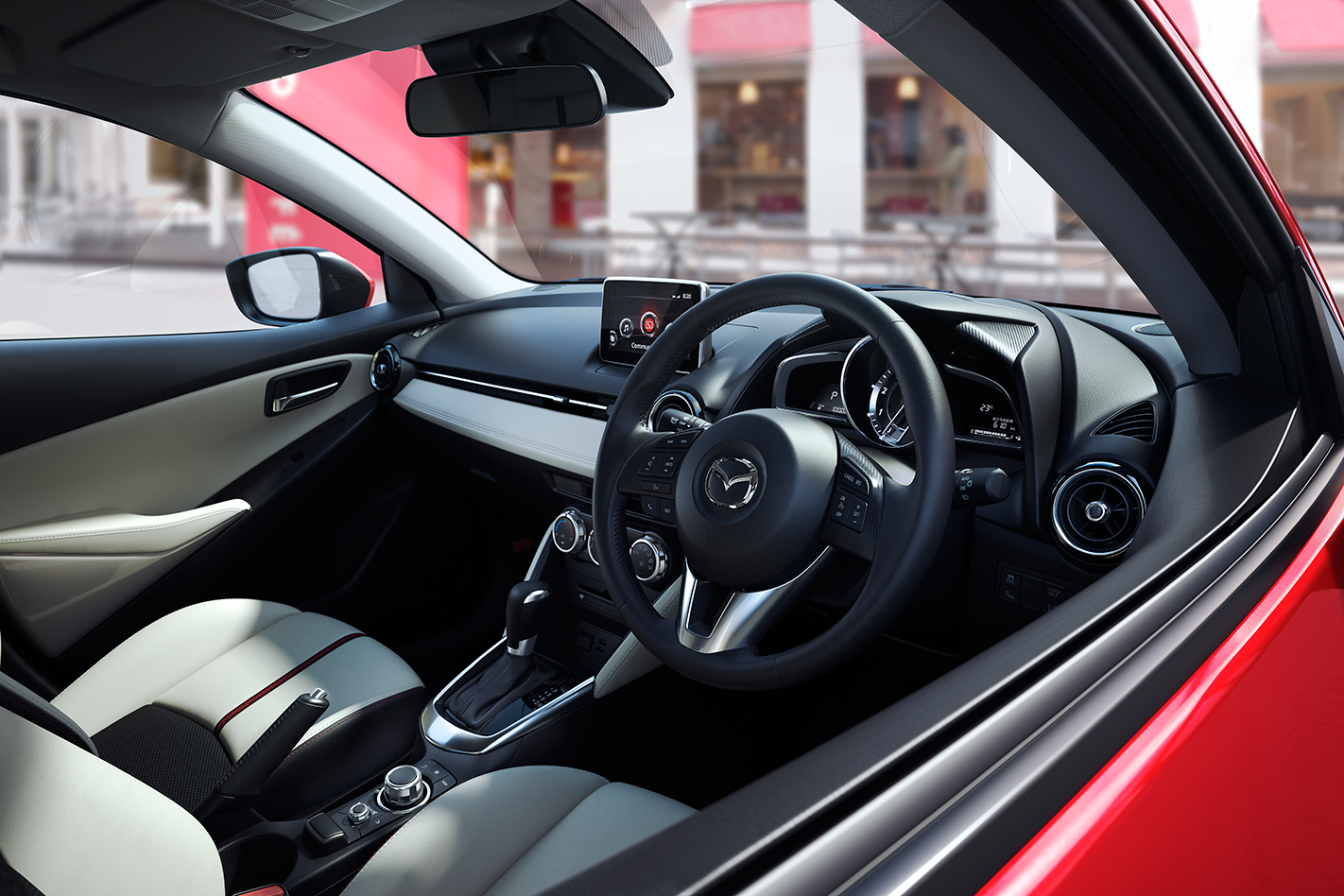 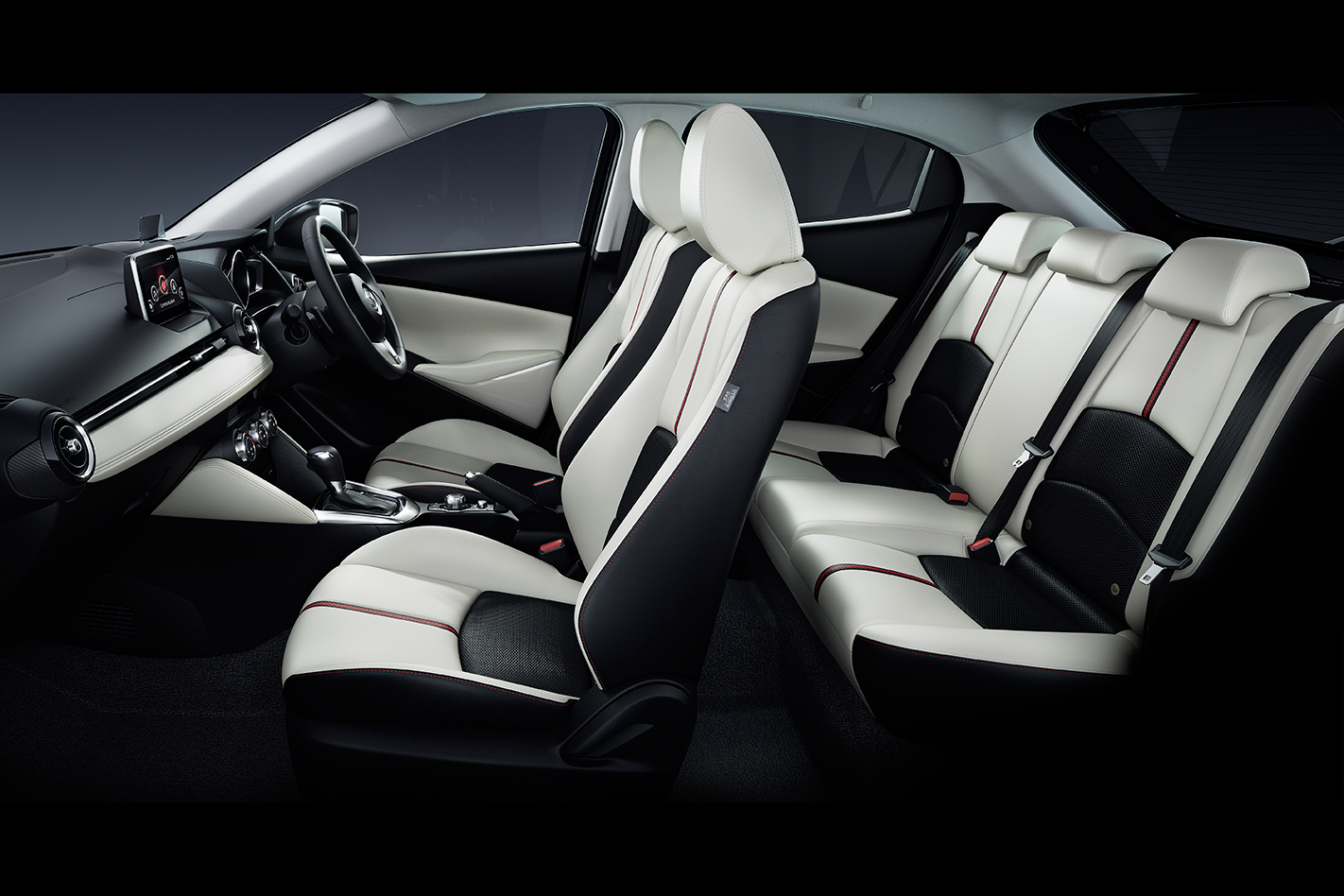 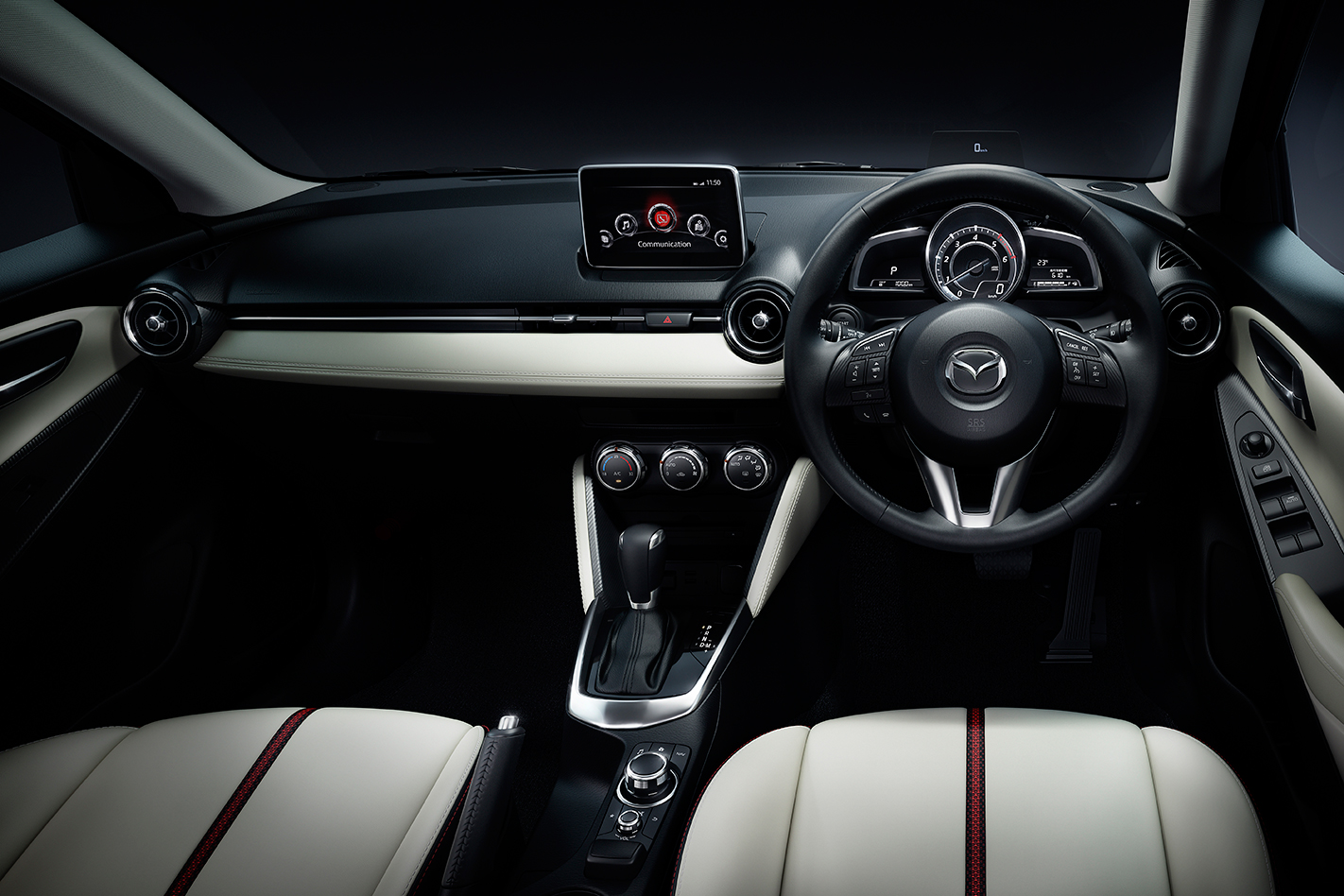 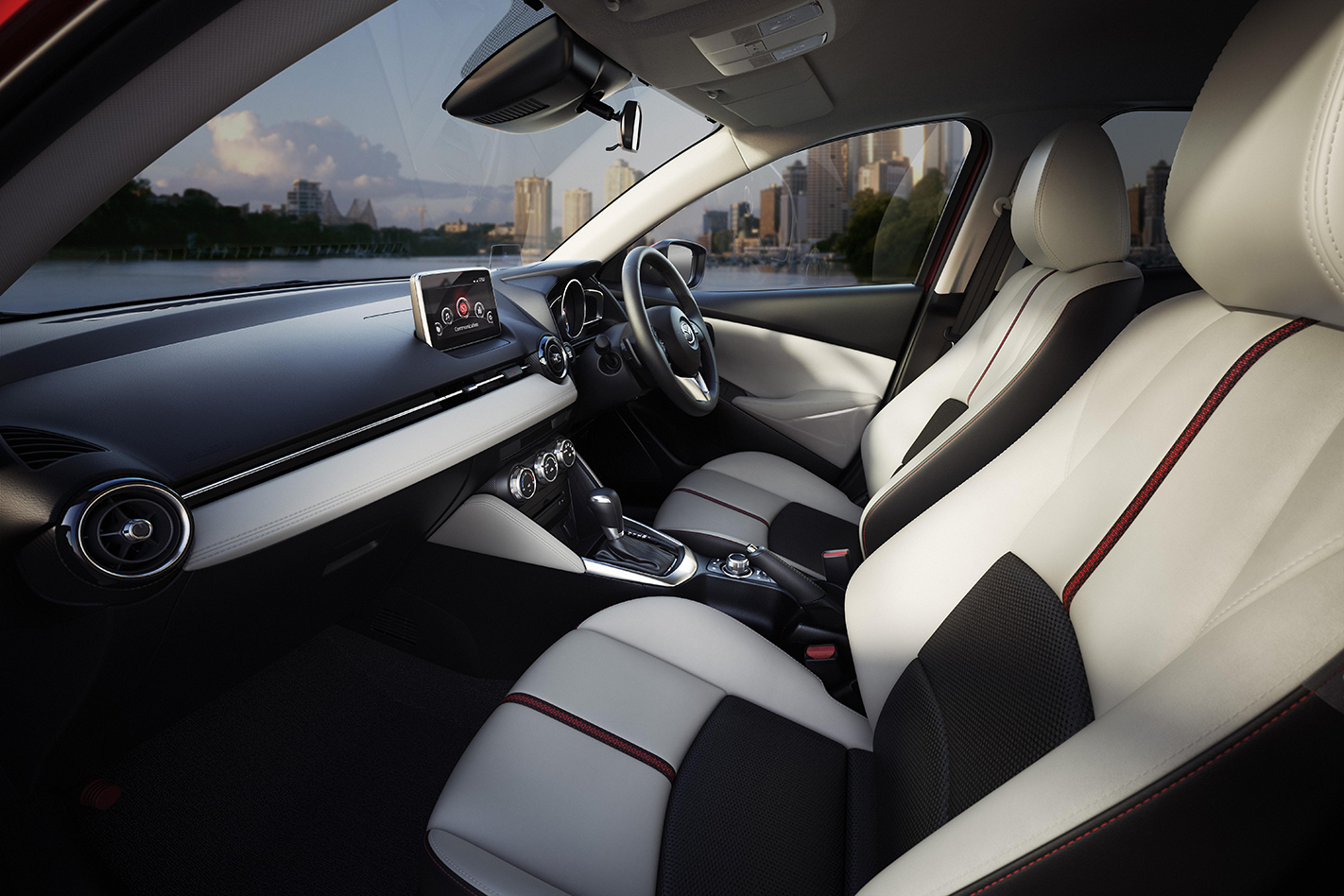 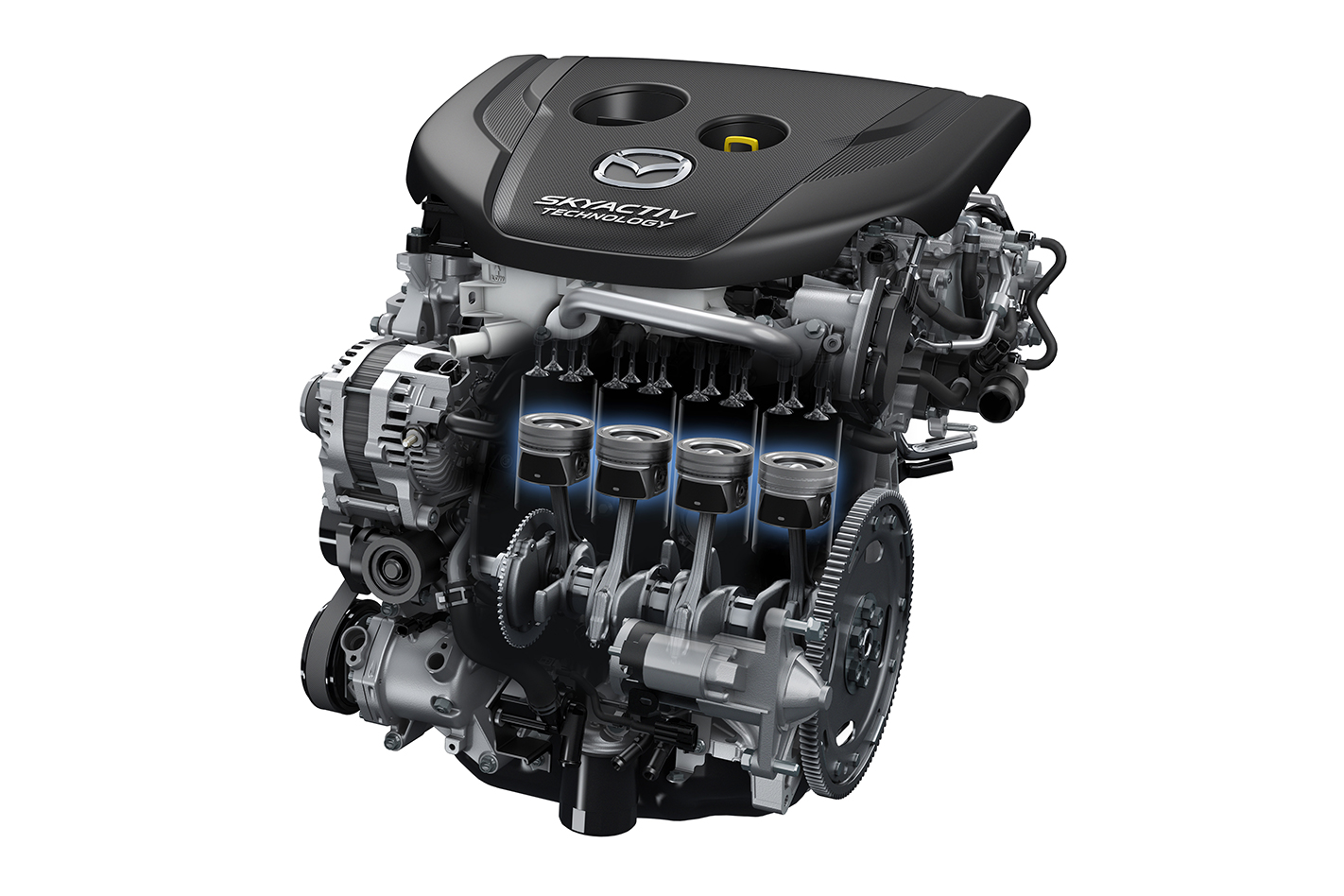