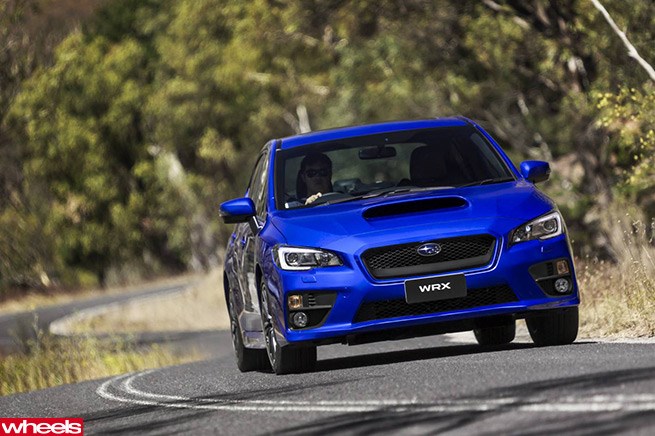 If the Subaru WRX – now 20 years old – were the product of any number of other (particularly Euro) carmakers, it could well have evolved by now into a dual-clutch-only hybrid four-door grand touring coupe.

Indeed, when the 2013 Detroit motor show WRX Concept suggested that the new Rex would morph into a sexier and more exclusive creature, we doubted that Subaru would see it through to production, or that, if it did, it would be a repositioning for the better.

Turns out we had little to worry about because, as you can see from the images of the Mitsubishi Evo X-inspired new WRX before you, Fuji’s heavies clearly lost their bottle. And, on the whole, we’re glad about that.

The fourth-gen model remains nothing more or less than a WRX – an everyman’s practical, turbo flat-four, all-wheel-drive, compact performance car.

There’s no dual-clutch (though an auto returns in the form of a CVT) and no stop-start; the height of tech in the WRX is that it adopts electro-mechanical steering, and finally has six rather than five forward gears.

However, by refining the ingredients that gave rise to two generations of icons (and a decent enough outgoing model), the new WRX crowns the former rally hero’s two decades on sale.

The doors thud shut, the quieter new cabin is constructed using better-quality soft-touch materials, and the sculpted flat-bottom leather wheel is connected to the best WRX steering yet. Before, you trusted the grip level – now you can feel it.

The all-paw chassis turns in with hitherto unknown enthusiasm and goes about its business of despatching corners with poise, polish, control and compliance, banishing the rubberiness of the outgoing WRX without ruining the ride.

Although the turbo flat-four engine is new, the 2.0-litre capacity is a throwback, while the mid-range thrust and unburstable boxer burble have long been trademarks.

The FA20 turbo is a development of the BRZ/86 engine and brings smoothness and refinement, though it lacks the fast-spool and low-rpm shove of the outgoing 2.5, while 9.2L/100km combined cycle economy reflects the fact that efficiency, while important, wasn’t Subaru’s top priority.

It’s still clearly a WRX, then, but a more refined, better-handling, more involving iteration in which the all-paw giant-killer’s time-honoured practicality lives on (although the hatchback doesn’t – America didn’t want it, so no-one gets one).

Last year’s WRX concept foretold a spectacular standalone model. However, despite dropping the Impreza nameplate, the production car remains a Rex to its centre diff and, with an entry price of $38,990, the famed value equation is stronger than ever.