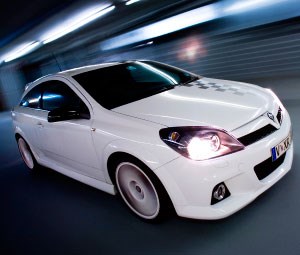 Limited-run NURBURGRING edition reminds us why we like HSV's VXR.

Limited-run NURBURGRING edition reminds us why we like HSV's VXR.

When it comes to brawny hot hatches, few punch harder than HSV’s Astra VXR. The 177kW turbo four, straight from the Opel Performance Centre (OPC) in Germany, stands alongside the Mazda 3 MPS as one of the fastest, if unruliest, front-drivers ever created.

It’s fierce all right, but it lacks a little polish compared to the benchmark Renaultsport Megane R26. With almost as much power, the sweet-handling R26 owes a lot to its limited-slip differential.

Which is why we hoped HSV’s Astra VXR Nurburgring Edition, named in commemoration of the VXR’s 8min 35sec laptime around the Nordschleife, might also employ something similar to set it apart from the ‘standard’ VXR and to help put all that grunt to more productive use.

Unfortunately, the Nurburgring's additional $2K ask buys you nothing of the sort. Sure, the lightweight, all-white 18s marginally reduce unsprung mass and they look cool until covered in brake dust, but they’re no fix for the Astra’s errant on-throttle behaviour.

After the initial promise of the front-end’s grippy, responsive turn-in on your way into the apex, powering out of corners isn’t easy. As soon as you accelerate, the front wheels bicker between themselves about which way each wants to pull the car, blunting the steering’s usefulness and leaving finite throttle control as your only hope of exiting the corner on-line.

The Remus sports exhaust is a welcome addition, with the edgier note from the chrome centre-rear exhaust drowning out some of the standard VXR’s Hoover-like whoosh. HSV claims the system also offers a slight performance increase, but even they admit that any gain is negligible.

But what the Nurburgring pack does award you is a pair of snug leather Recaros with the track map stamped in the back, which look great, and a host of other cosmetic bits and pieces.

The striking love-it-or-hate-it chequered decal that stretches over the length of the car, along with the imitation carbonfibre external door mirrors, B-pillars and side sills all look the business.

But what doesn’t look so hot, as with the standard HSV VXR, is the mis-match of HSV, Vauxhall, OPC and Opel badges scattered throughout the car. We’ve no complaints about the Vauxhall-derived VXR logo, as it’s the name of the car, but the whacking great Opel badge staring you in the face from the centre of the steering wheel is an expedient touch.

Sure, it’d cost money to glue an HSV logo on a standard Astra wheel boss, but when it’s that prominent, we reckon it’d be worth the expense. The OPC dials – necessary because of our km/h requirements – don’t match, either.

Of the 835 Nurburgrings to be built (again, a reference to the car’s laptime), Australia will only receive 20. So if you’re considering buying a VXR anyway, the Nurburgring's tougher exhaust note, all-white style, and model exclusivity make it worth the extra $2K. It’s been a while since we last drove the VXR, but its raw appeal, along with the overt Nurburgring styling, reminds us exactly why we like it.