The Wheels Verdict: It may not make much sense in an Aussie context, and the price seems fanciful, but as a re-engineering exercise, the Project 8 is a triumph. It’s a hardcore track car that we suspect would still be tolerable on the road in LHD markets, so if you were to resist the temptation of the two-seater configuration, you would be the proud owner of the world’s most bonkers family car. 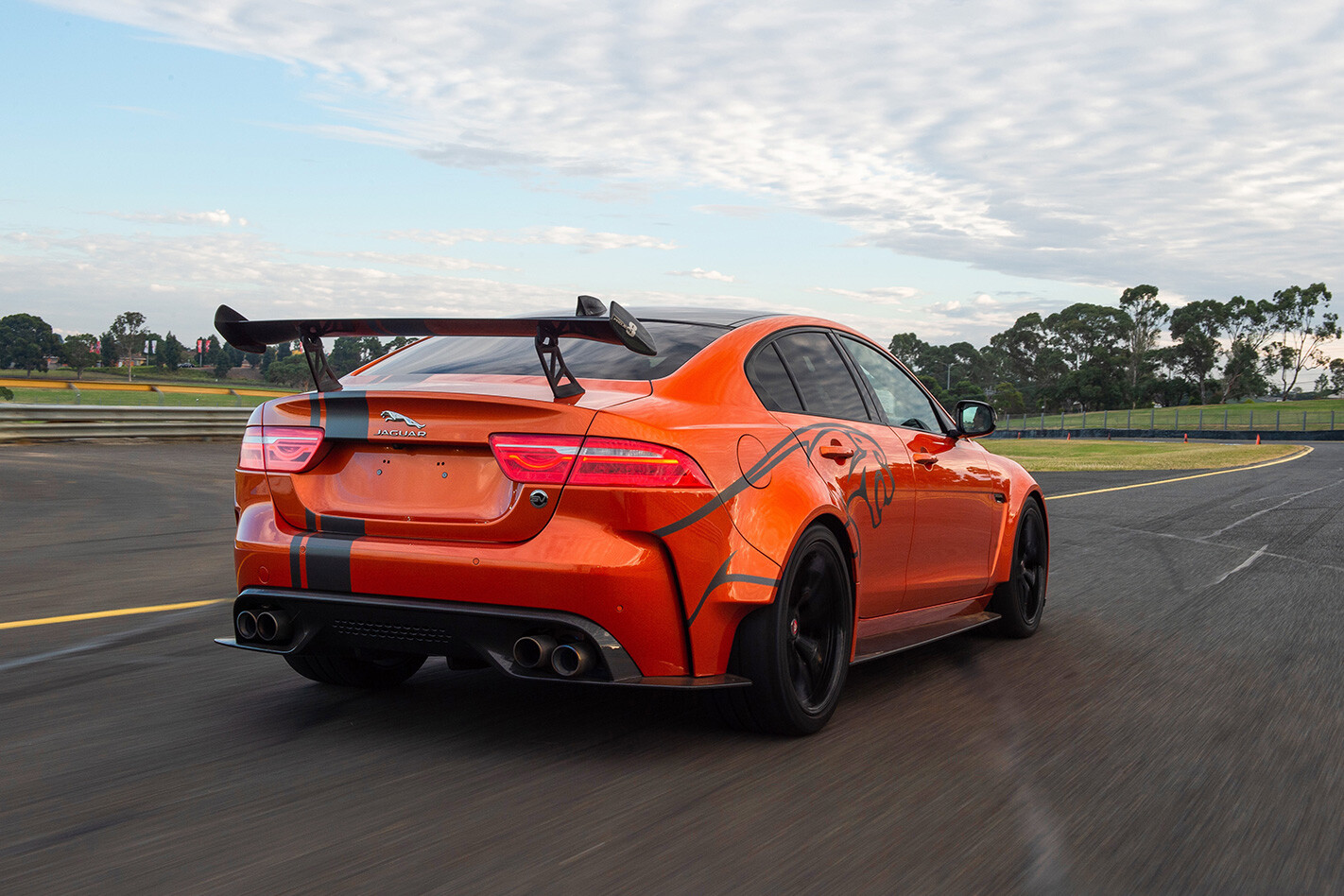 Jaguar brought out this example of its most powerful production road car to gauge potential customer interest at the Australian F1 grand prix. The car is now being shown to existing customers at Jaguar drive days, which allowed Wheels to snag three laps of the Sandown circuit in Melbourne.

We can’t think of a direct four-door rival for performance or price. You could spend similar money on a Porsche 911 GT3, but until AMG-Mercedes builds a four-door C63 S Black Series, or BMW revisits the M3 GTS formula, Jaguar would appear to own this (admittedly very narrow) niche.

If your eye happened to glance straight to the price tag of this, Jaguar’s most powerful production road car in the company’s history, it’s possible you’re now spluttering up a spray of chai latte, or perhaps your smashed avocado is exiting your nose. In its simplest context, this is a mid-size Jaguar XE sedan re-engineered by the company’s SVO division that now wears a tag of $325,000.

Oh, wait, that’s when configured as a four-seater. If you want the version that adds a half roll cage, deletes the rear seats and includes a data logger, the price jumps to $349,000. Still with us? Great. Just know that it’s built as a left-hooker only, so its road-going talents will remain unuseable in Australia.

Are they kidding? Actually, no. That price seems to be what the market will wear for a car that claims to be the fastest production four-door on the planet ( it nailed a 7min 21.2 around the ’Ring) especially when Project 8 is capped at 300 units.

Let’s start with the XE’s body, or at least, what’s left of it. Only the roof and front doors remain from the donor car; everything else is carbonfibre or aluminium. The rear track is now 73mm wider than the XE, while the front has been bumped out by 24mm. Bushings are hardcore, and springs are four-and-a-half times stiffer than standard. Ride height can be dropped a further 15mm for track use.

The engine is the venerable AJV8 supercharged 5.0-litre V8 used across the JLR portfolio, most closely related to the version in the F-Type SVR, but reworked to bump up outputs to 441kW and 700Nm. Claimed 0-100km/h is 3.7 seconds, top speed is 322km/h.

Front brakes are 400mm carbon ceramics clamped by huge six-piston calipers; tyres are 20-inch Michelin Cup Sport 2s, 305mm rear, 265mm front. Then there’s the vast man-hours that went into the recalibration of the electronic systems. The E-diff has been retuned, as have the ESC Sport parameters, along with the shift mapping of the eight-speed ZF automatic.

By the time I’m squeezed in the low-set, single-piece carbonfibre race seat, lashed in with the four-point harness, and said g’day to pro racer Tony D'Alberto sitting next to me, the price tag is starting to feel (marginally) less outrageous. This is Jaguar’s four-door equivalent of a Porsche 911 GT3 RS; a car costing around $416K, and by comparison, Porsche’s most track-focused 911 is as common as a head-cold.

Nor does any Porsche sound like this thing. The engine erupts with an old-school, free-breathing bark, its exhaust resonance felt pulsing under the car and out the vast rear quad pipes. Its character is a real departure from the twin-turbo V8s offered by AMG, BMW M, Audi RS et al; in that it feels increasingly manic the harder you wind it out. There’s no tapering of the power curve at the top end, it just get more and more feral until it head butts the limiter just shy of 7000rpm.

But it’s the chassis that really sparkles. The traction is phenomenal, the feedback and adjustability quite delicious. The steering gives a laser-cut connection to the pointy end; the suspension is ultra-disciplined but retains an expensive-feeling damping compliance and doesn’t crash when you use the kerbs. And the brakes; just … wow. The middle pedal conspires with the seat harnesses to squeeze expletives from your lungs when you mash those carbon ceramics the way D'Alberto insisted I did.

Okay, the gearbox doesn’t quite deliver the lightning-fast shifts of the best dual-clutches, but the ratios still punch home quick and clean, the diff hooks up aggressively, and there’s a nuanced tactility to the whole set-up that I hadn’t expected.

So don’t be too quick to dismiss this as a cash-grab for a limited-run novelty model. The Project 8 highlights the depth of ability that JLR has in its SVO division, and relevance be damned; that’s to be celebrated.