Lamborghini’s Gallardo was the company’s biggest-selling vehicle of all time, and its replacement is better looking, smarter and faster. And, in Australia at least, cheaper as well. What’s not to love?

Lamborghini’s Gallardo was the company’s biggest-selling vehicle of all time, and its replacement is better looking, smarter and faster. And, in Australia at least, cheaper as well. What’s not to love? We take the new Huracan for an exclusive first road drive in local conditions.

WHAT IS IT?
It may not look as different from a Gallardo as it could, but it’s genuinely all-new underneath, with a carbonfibre and aluminium chassis that’s 10 percent lighter and a hefty 50 percent more rigid than its predecessor. The 5.2-litre V10 now makes 449kW and 550Nm, shoving it to 100km/h in a claimed 3.2 seconds, a full half a second faster than the Gallardo (and rumour has it they’re sandbagging the time, to protect the virtue of the V12 Aventador). A 0-200km/h time of 9.9sec proves this is a proper supercar.

WHY WE'RE TESTING IT
We pestered sooner and louder than anyone else and managed to secure the first Australian road drive of the Huracan, and we were given this unique-looking matt-black model with just 82km on the clock when we picked it up. We already knew it was majestic on the track, where the car was launched, but how would it cope with broken and battered Australian tarmac?

MAIN RIVALS
The new Lamborghini has somehow made it to our shores at a price of just $428,000, some $35,000 cheaper than the Gallardo it replaces, which means it also nicely undercuts the McLaren 650S ($441,000) and looks like a bargain next to the Ferrari 458 Italia ($526,950). The McLaren is quicker, but nowhere near as impressive, while the 458 is possibly more beautiful, but less brutal. The Huracan is hard to beat.

THE WHEELS VERDICT
Apparently there are some people who don’t like Lamborghinis, but they must have two heads, or they haven’t driven a Huracan yet. The new baby bull erases the Gallardo’s few failings – the lurching gearbox being the worst of them – and perfects the formula. And the noise, the last dying roar of naturally aspirated mega-engines, is worth the price of entry alone.

THE WHEELS REVIEW
SERIOUSLY, how does Batman ever get any crime fighting done? We’ve just driven the real-world equivalent of the Batmobile, a matt-black Lamborghini Huracan that looks like the Tumbler from The Dark Knight had sex with a shark, and as quick as it is, it can never escape the crowds that cluster around it, everywhere you go.

This is, first and foremost, a desperately dramatic-looking car, and would remain so even if painted mauve, but our $20,000 optional non-paint job makes it even more eyeball arresting.

The way the nose plunges towards the road, the hexagonal  hegemony of the design, the sharp creases in the roof – which you can really only notice in a car that stands barely waist high – the jet-intake inspired nostrils, all of it seems like the over-the-topness you find in concept cars or children’s cartoons.

The more you stare at it in the metal, the more you involuntarily guffaw with joy. Hats off to Lamborghini for being mad enough to actually build it like this.

Showing a similar disregard for reality is the company’s use of a naturally aspirated 5.2-litre V10 engine, quite likely the last of its kind. With the rest of the world looking to turbos and hybrids to keep fuel economy and emissions under control, Lamborghini has given a palms-up Italian shrug and said “maybe next time”.

The weight savings made by moving to a carbonfibre and aluminium chassis have helped this 1422kg Huracan achieve an official fuel figure of 12.5L/100km, but in the real world we averaged something closer to 30L/100km, and didn’t care a bit.

The natural aspiration is to blame, and not just for the obvious reasons. The problem is that it sounds so addictively, ridiculously wonderful that you can’t help treating the throttle inappropriately.

Ferraris are high-pitched and operatic, but there’s something darker and more malevolent about the bellowing howl this Lambo produces under hard acceleration, a noise only equalled by the percussion of the crackle-bangs you get on the overrun. Getting off the throttle has never been this much fun.

Getting on it is still better, of course, because it allows you to access the serious thrills delivered by 449kW and 550Nm, which kicks in at just 1500rpm.

It’s the kind of acceleration that makes women scream and threaten to cut off your testicles, and produces loud “oooph” noises from men, even those who occasionally drive fast cars for a living. Editor Butler requested a lift in the Huracan and made grunts from the passenger seat I’ve not heard him make before. Although his wife may have.

Accessing all the car’s performance takes time, because both your body and brain need to adapt. It’s alarming enough at half or three-quarter throttle, but away from the race track you really need some space, or some temporary insanity, to put your foot flat. The rush to 9000rpm in first and second gears is so intense that you find yourself hitting the rev limiter while your body is still frozen in shock.

While this makes the Huracan at least half a second quicker than the Gallardo, this is not the new car’s greatest leap forward. It’s also a seemingly implausible 50 percent more torsionally stiff, and uses similar software to the Eurofighter jet – along with three accelerometers and three gyroscopes – to keep it pointed in the right direction no matter what, so it corners with new and improved aggression and ease.

The old Gallardo’s greatest failing was that its E-Gear system was as lurchy as an alcoholic at Oktoberfest. Gearchanges in Corsa (it’s Italian for Track, but sounds sexier) were like having Tiger Woods imagine the base of your spine is a golf ball.

But the new Huracan’s dual-clutch system is brilliant. Even left in automatic mode it delivers smoothness when you want it, and brrrapping barping downchanges when you’re having a go.

In manual mode, though, it is astonishingly great. I’ve never enjoyed a flappy paddle gearbox as much, the instantaneous insouciance of millisecond shifts at the merest flick of a finger, the complete lack of a gap between surges of power.

The fact you can no longer get a gated manual Lambo still makes me sad, but the new box makes me almost equally happy.

The Huracan is not perfect, although it comes close in some departments. The seats are not far off awful, with too much lumbar support; it’s adjustable, of course, but you can only make it even worse, not better.

Putting the wipers and the indicators on the steering wheel is all the rage, but it’s simply not as practical as doing it the old way.

The interior is, particularly compared to a Ferrari, a bit on the plasticky side, and there are still too many reminders of the parts-sharing with Audi – the buttons, the sat-nav software, the fonts and, worst of all, the key, which could be from an A3.

On the plus side, you get a version of Audi’s virtual cockpit, with shiftable TFT screens that allow you to choose a big central map display when you’re lost, for example.

The two highlights of the interior are the ‘torpedoes away’ switch over the start button, and the shift paddles, which are just about sharp enough to cut yourself on and big enough to be used as Ninja-style weapons in an emergency.

The steering could use a little more weight because it now feels closer to an Audi R8 than a Gallardo, which was more muscular.

And you can’t see a damn thing out the back; the blind spots sure can make life interesting, particularly when other drivers are swarming around you, trying to use their smartphones and drive at the same time.

Still, if I had a dollar for every time someone said, “Wow, that looks like the Batmobile”, I’d have enough money to buy a Huracan. And, those few flaws aside, I genuinely think I would, because it’s almost as much fun to drive as it is to look at. 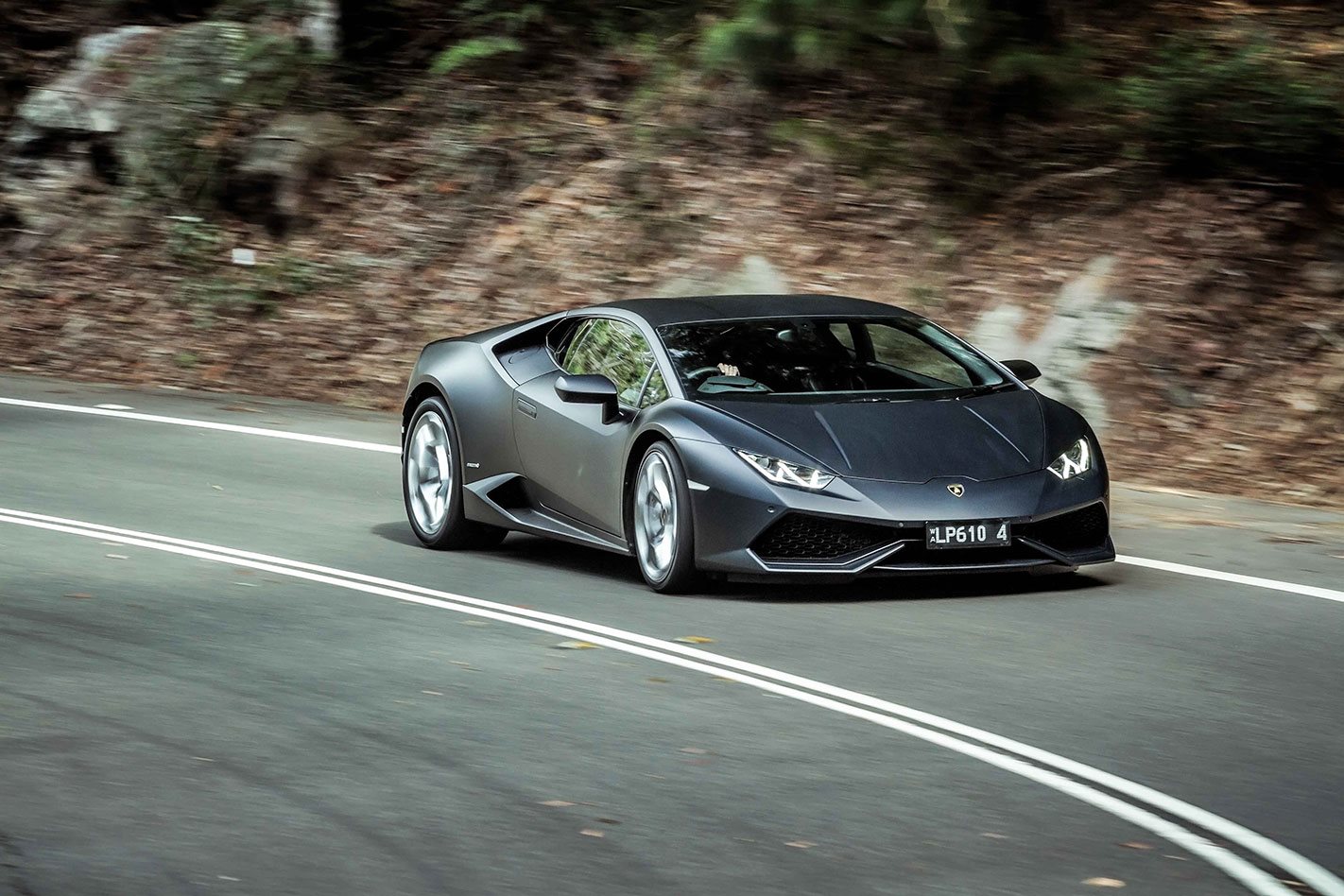 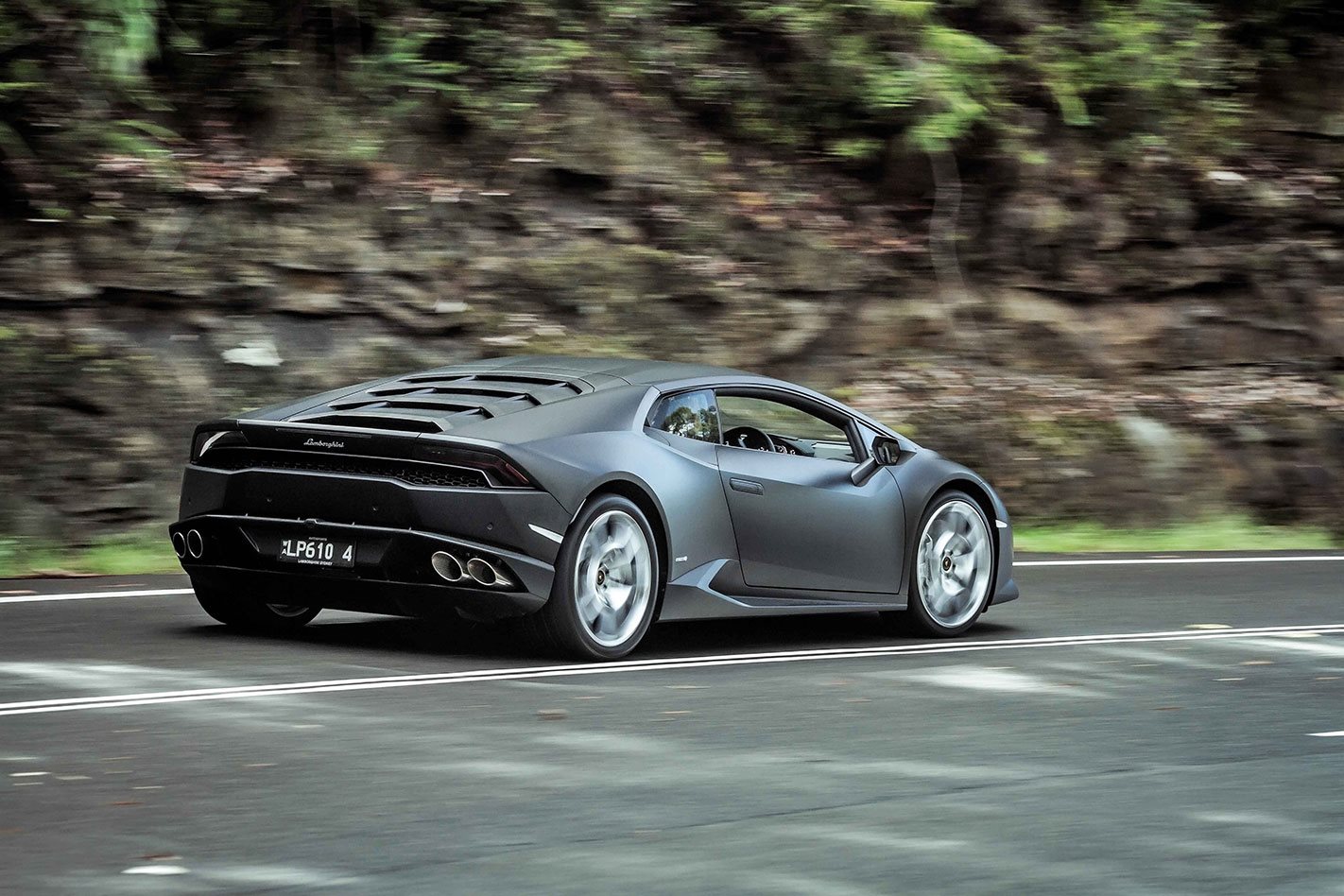 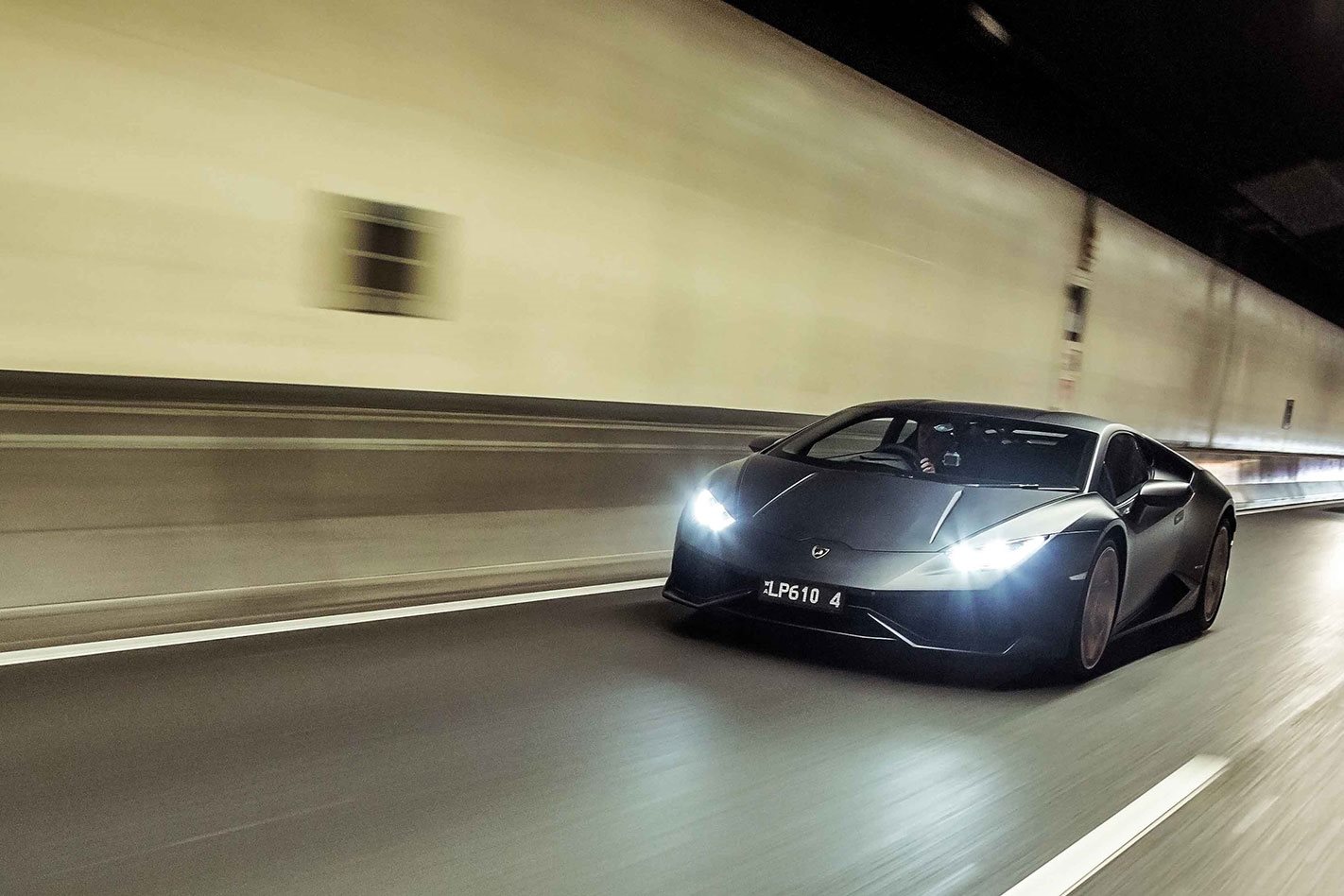 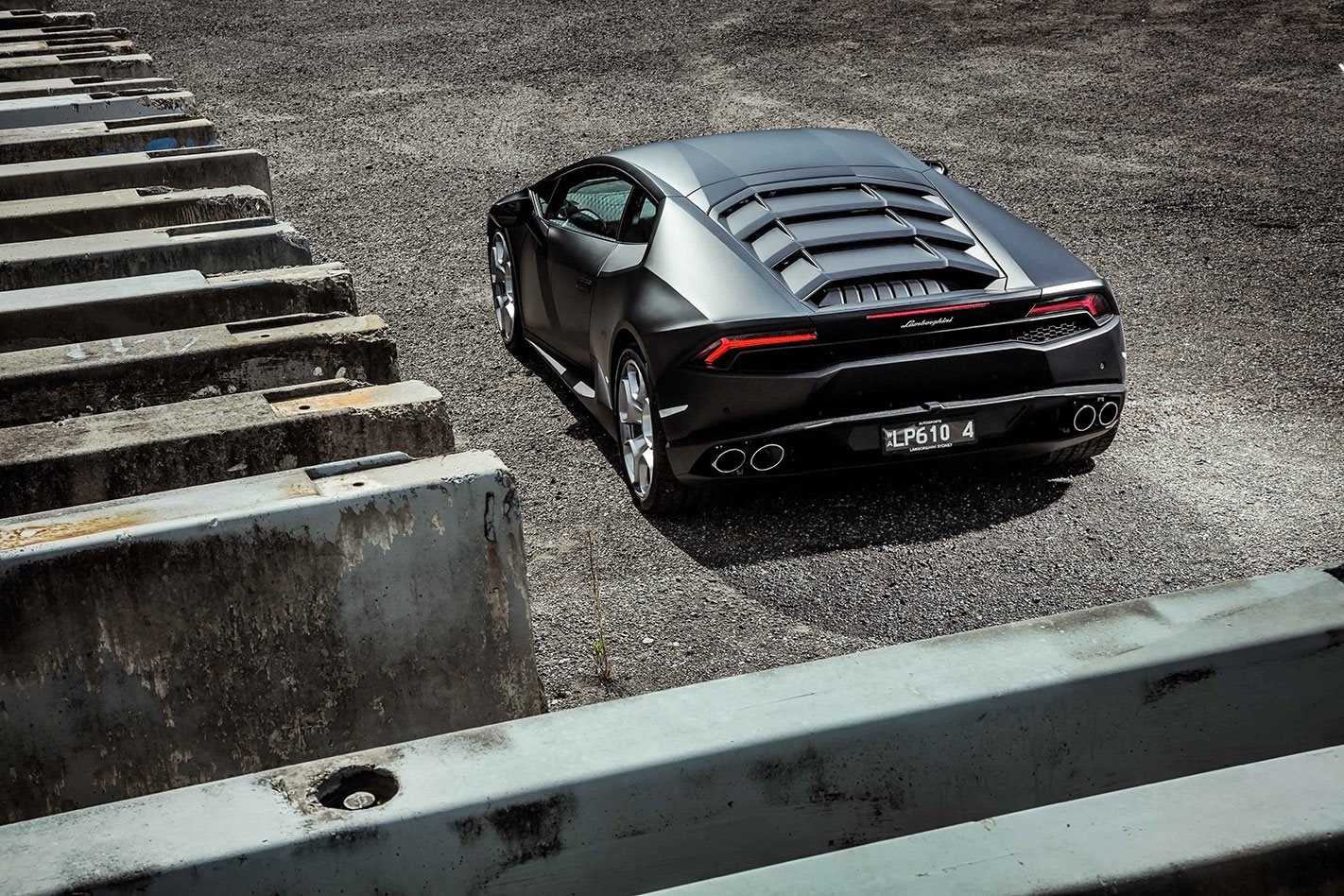 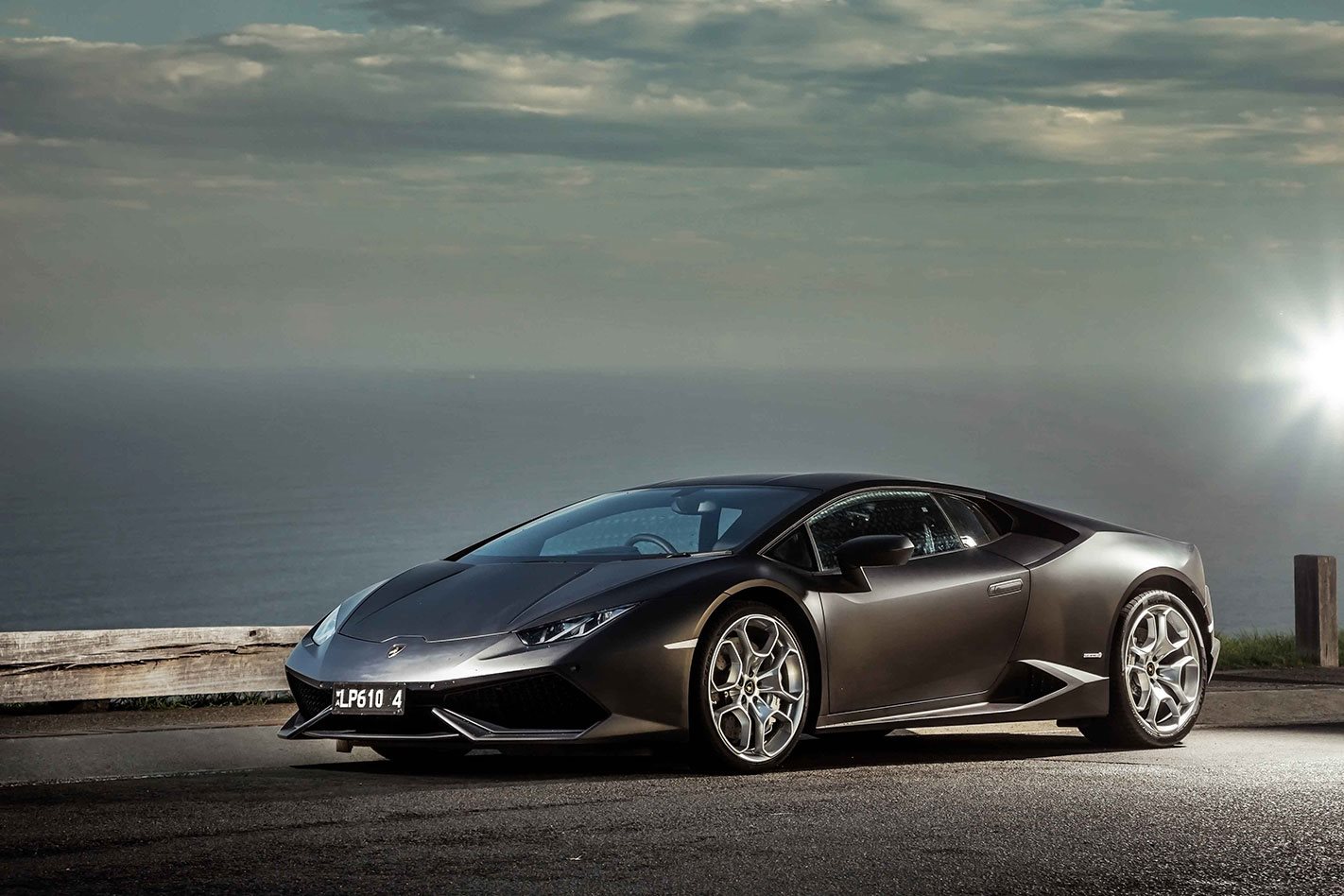 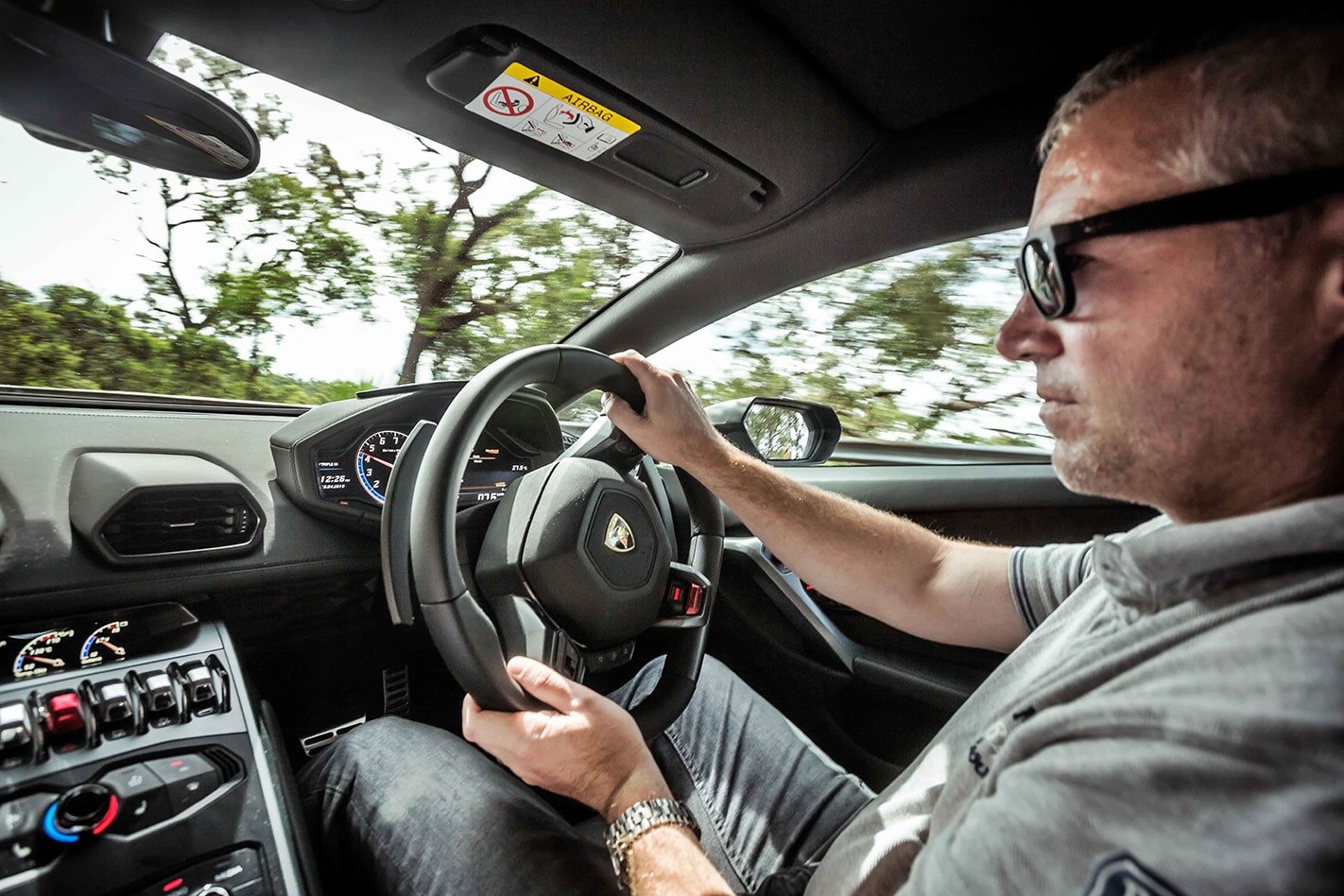