The Wheels Verdict: It’s hard to think of another car that has changed so much but looks so similar. The Lamborghini Huracán Evo’s continuity of shape undersells the massive step change that this vehicle represents. Finally, we have a Lamborghini that needs no excuses as a driver’s car. It feels a genuine landmark model that heralds a certain coming of age at Sant’Agata.

WHAT IS THE LAMBORGHINI HURACÁN EVO?

You’re probably familiar with the Lamborghini Huracán. The junior supercar has been around since 2014 and the Evo could probably be described as a very extensive facelift. Aside from the styling changes, the Evo carries forward a lot of technical know-how gleaned from the best of Lamborghini’s other models. The net effect of this raft of upgrades has been to polish and fettle the Huracán to devastating effect.

Our first Australian drive of the Huracán Evo was an invitation too good to turn down. A perfect day at Phillip Island GP Circuit where we could safely exploit the Lamborghini’s limits gave us a great opportunity to see whether the Evo could live up to the big billing. 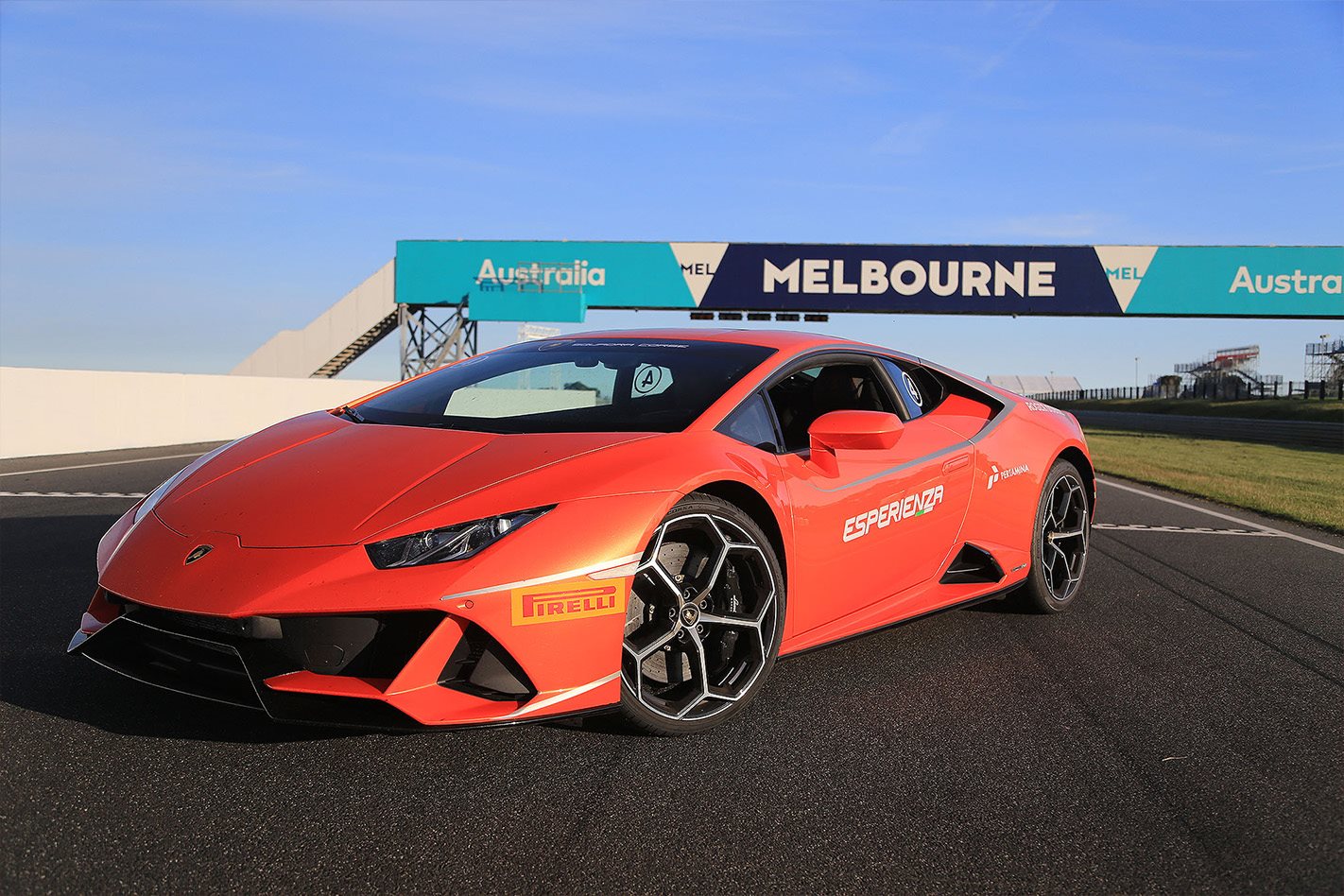 It seems quite remarkable that a 610hp Lamborghini could be described as dull. Yet read the reviews for the original Huracán and testers came away somewhat crestfallen. They’d moan about its understeer, its flaky electronics and the fact that that typically Lamborghini frisson of danger had been excised from its DNA. In short, they felt the Huracán had become sanitised, a supercar for the snowflake generation.

This didn’t sit to well with Sant’Agata. We saw a rawer rear drive version and then the perpetually furious Performante model, which grabbed Nurburgring record thanks in no small part to its fiendishly clever aero package. Most cars become more polished as the years progress. The Huracán was going the opposite way. Then, five years after the hanky was whipped off the Huracán at the 2014 Geneva Show, we were presented with the Huracán Evo.

I can understand if you’re a little underwhelmed by the Huracán Evo. Let’s face it, the Evo doesn’t look that different to the original 2014 Huracán. The silhouette is similar and it’s still powered by an atmo V10 engine. When the Huracán was launched, Ferrari’s junior supercar was the 458 Italia. Since then, Ferrari has first switched to the all-turbo 488 GTB and then replaced that model with the F8 Tributo, a 530kW monster. Has the 470kW Evo been left in Maranello’s wake? 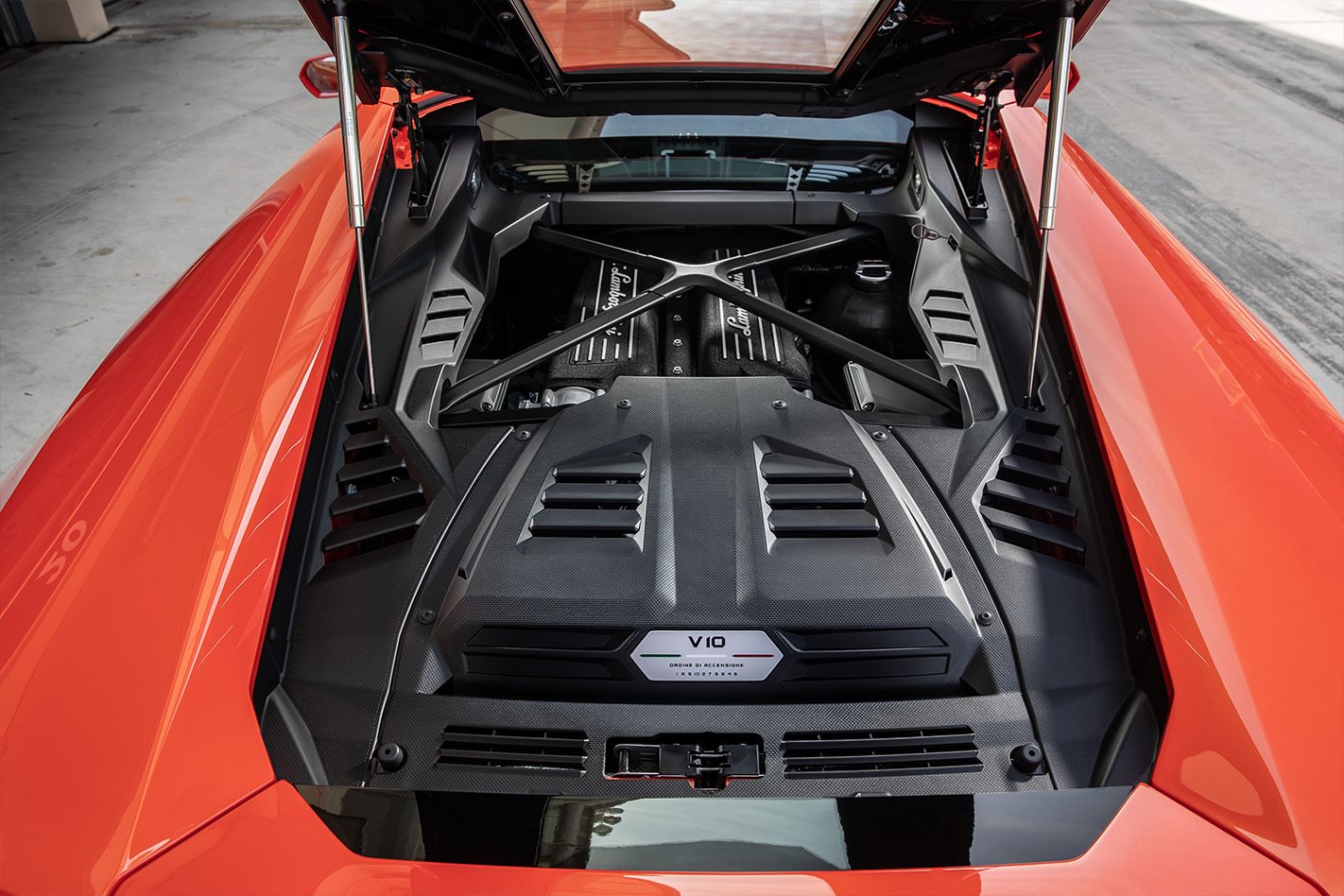 Then you drive it and realise that it might just mark the pinnacle of normally-aspirated supercar capability. That in itself will be enough for most. There are a number of key advantages the Evo enjoys over its predecessor, none of them related to horsepower. The first is its aero package.

While the Evo does without the track-focused Performante’s extrovert array of big wings and active aero elements, it nevertheless increases downforce sevenfold over its predecessor. The really clever part is that it manages this while at the same time reducing its overall drag coefficient. That’s the very embodiment of working smarter rather than harder.

The entire nose cone of the Evo has come in for revision, now featuring a deeper front splitter with a suspended front wing integrated within. A pair of air curtains directs cooling air to the ceramic brakes and then depressurises the front wheel arches, before being directed to the engine intakes ahead of the rear wheels.

Shifting the exhausts upwards allows the rear end to work the air far more cleanly, the underfloor area and wall-to-wall rear diffuser combining with a subtle slotted rear spoiler that features a venturi to accelerate air across the planes. 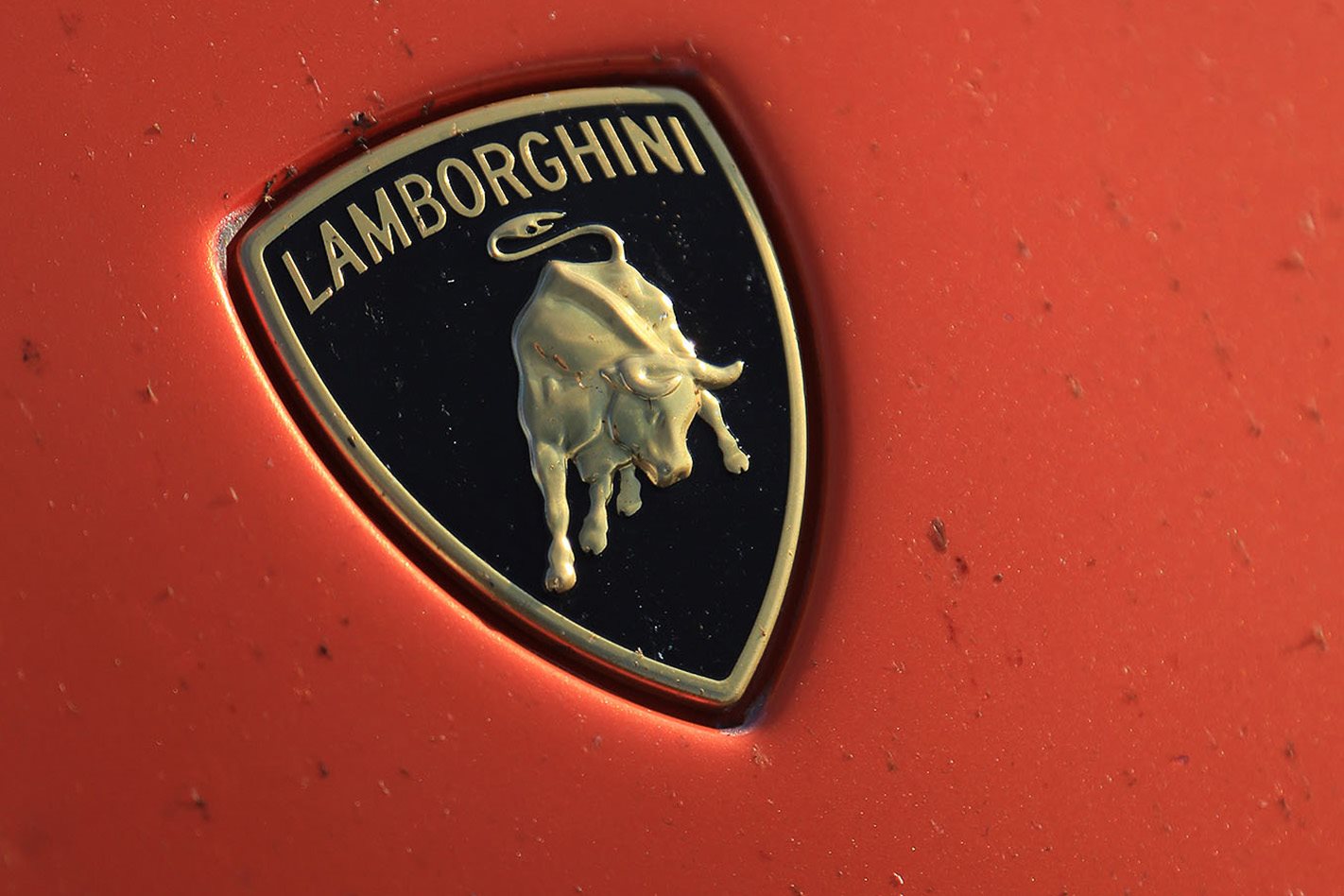 It works too. In the old Huracán, you’d need to be very careful when trail braking into corners at high speed. The Evo feels a good deal more planted when you take liberties with it. Traction out of corners was never a Huracán shortcoming and the Evo’s mechanical limited-slip diff and MagneRide active dampers help ensure that all of those 600 Newton metres are put to effective use.

It’s helped in its deployment of torque by LDVI (Lamborghini Dynamic Vehicle Integration), a hugely powerful processor that monitors and marshals all the vital signs of the Huracán’s dynamics. The Evo gets a four-wheel steering system, with tech lifted from the Aventador S. There’s also a clever all-wheel torque vectoring setup, plus traction and stability control functions to juggle.

Lamborghini calls LDVI’s responses ‘Feed Forward’, in that it is a predictive rather than a traditionally reactive system. The ‘brain’ takes inputs fifty times per second from its dynamic sensors, monitoring throttle, gear change, steering and braking while assessing the amount of grip available.

The four-wheel steer system has been developed in-house at Lamborghini. There’s a remarkable degree of subtlety to the way that the rear wheels steer. In effect, it takes the front axle’s dynamic steering system and applies a ratio of ten percent to the rear wheels, up to a maximum rear steering angle of up to three degrees. On track, this gives the Huracán an agile, all-of-a-piece feel when turning in to sharper corners without the offputting transitional phase of many four-wheel steer setups. 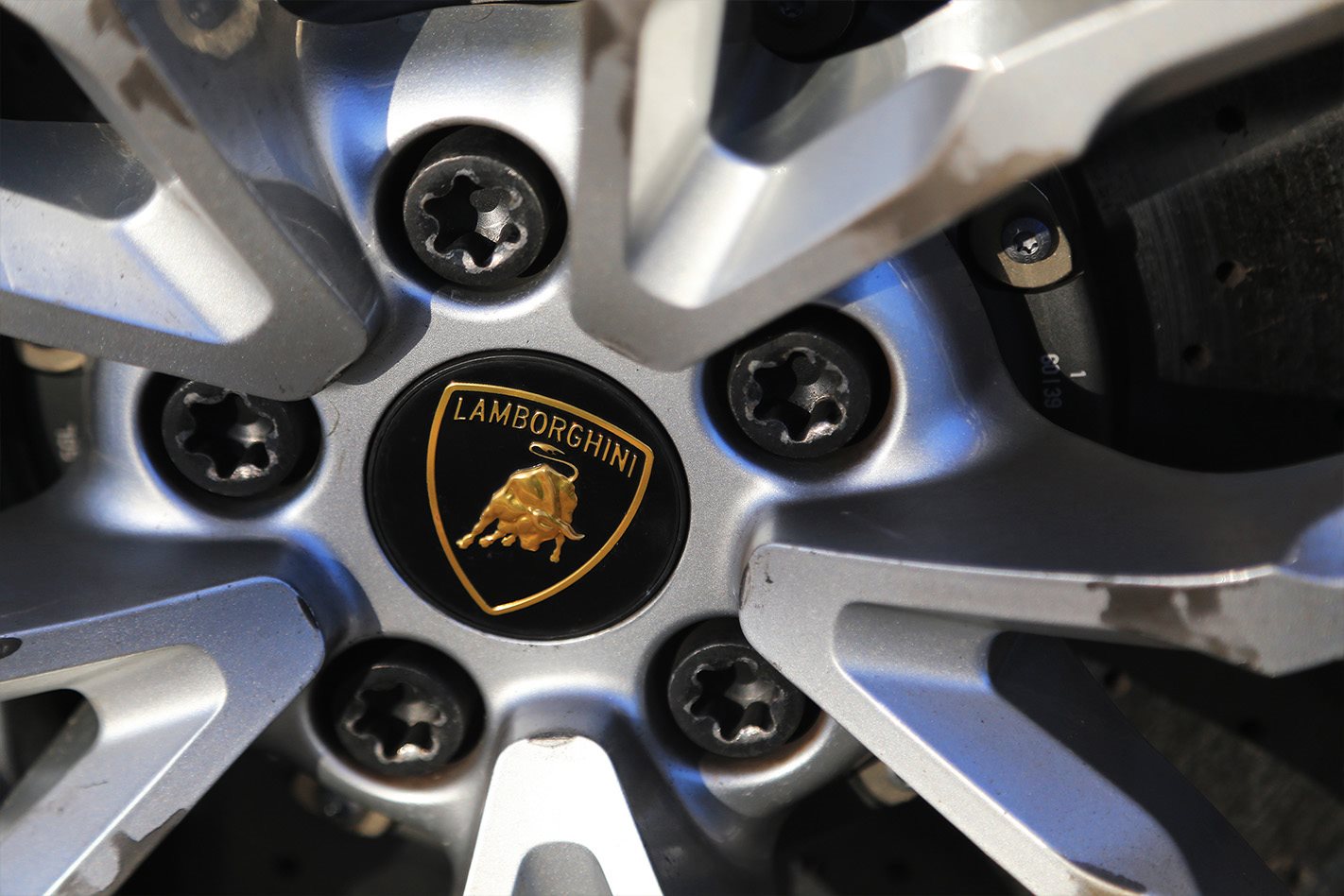 What it doesn’t do is endow the steering with a whole lot of feel. Compared to a McLaren 600LT, the Huracán’s electrically-assisted helm feels distinctly taciturn. Loading the car up with a stack of lateral-G doesn’t offer the detailed feedback that a hydraulic steering system offers, but it’s nevertheless easy to feel where the limits reside and, unlike its predecessor, this Evo model responds playfully if you want to tuck the nose in and swing the tail wide by a few degrees. When you do break the Huracán Evo’s adhesion, you will need quick hands. The electronics can’t totally disguise the fact that this is a wide, short-wheelbase car with stiff tyre sidewalls.

It would have been nice to have a fully customisable drive mode. As it stands, you’re not able to separate the damper settings from the drivetrain settings. When you’re attacking a mountain road, it would be good to have Corsa or Sport mode for the drivetrain with the dampers set into their softest setting. Given that we were limited to a race circuit smoother than a Bruce McAveney segue, we didn’t get to put the Evo’s bumpstops to the test.

Any notional shortcomings of steering or ride are offset to some degree by the soundtrack. The V10 was always an angry, urgent sounding thing, but the new exhaust on the Evo makes it sound even more aggressive. That’s because the engine is that of the ball-tearing Huracán Performante, trick titanium valves and all. Aided by all-wheel drive grip and gumball 305/30 ZR20 P-Zero Corsas, the Huracán Evo rips to 100km/h in 2.9 seconds and to 200km/h in 9.0 secs. That’s quick. A Tesla Model 3 Performance would take 14.1 seconds. A Porsche 911 GT2 RS (8.0sec) or a McLaren 720S (7.1sec) demonstrate the advantages of turbocharged grunt but neither sings like the Huracán Evo as it ramps into its demented lunge from 5500rpm to the 8500rpm redline. It’s one of modern motoring’s great events.

The cabin’s an event too. Some of the ergonomics are a bit old-school Lambo, but materials quality has improved considerably and the 8.4-inch capacitive touchscreen mounted in the centre console is surprisingly good. There’s no head-up display, which is a bit of a miss, but the steering wheel-mounted drive mode selector is cool and there’s even a decent amount  of seat recline for taller drivers. 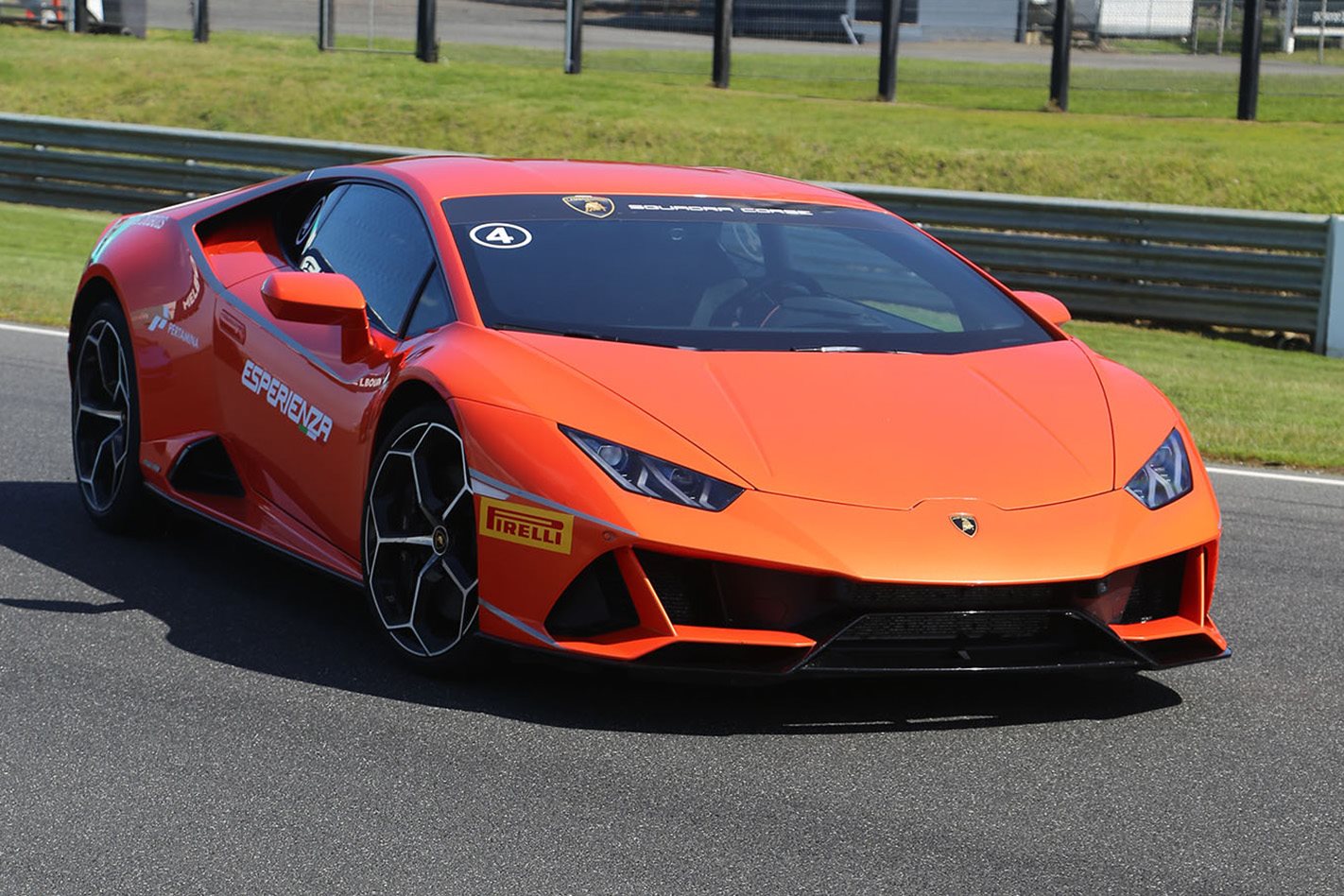 Where the Huracán Evo excels is in dragging a resolutely analogue formula into the here and now. By rights, this thing ought to feel like a bit of a dinosaur, but as Lamborghini’s technical director Maurizio Reggiani likes to proclaim, “I’m a hardware engineer… the software is always the slave to the hardware.” Get the fundamentals right and the rest is easy. We could well be driving the last great atmo Lamborghini sports car. If that is indeed the case, the Huracán Evo is a fitting send-off. 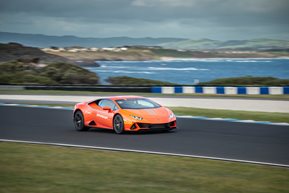