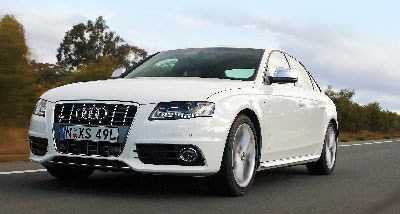 Occasionally a car comes along that completely sabotages your best efforts to like it. Exhibit A: the previous-gen Audi S4.

On paper, its free-revving V8, sports-tuned chassis and four doors sounded tempting. Then you experienced the remote, feel-free steering, the nose-heavy cornering stance, brittle, edgy ride, and suddenly parking it overnight in downtown Baghdad was a tempting proposition. Its CV suggested professional athlete, yet the reality was a dumb jock with a learning disorder who cried in chick flicks.

Thankfully, the ghosts of the past are largely exorcised in this, the latest generation of Ingolstadt's most sporting mid-sizer below the RS. For the uninitiated, this is Audi's retort to BMW's 335i; a focused sports sedan aimed at keen drivers who aren't sufficiently committed or cashed up to stretch to an M3 ... or RS4, if those non-multi-tasking types at Quattro GmbH ever get around to building the next generation one.

The most obvious departure here from the previous model is the engine. Gone is the 4.2-litre V8, replaced by a warmed-over version of the 3.0-litre supercharged V6 first seen in the recently revised A6 range.

To continue the nomenclature nonsense created by rival BMW, Audi sticks V6T badges on the flanks in a baffling attempt to suggest there are turbochargers, rather than a Roots-type supercharger, lurking under the snout. Never mind, the fact is the new blown V6 is slightly down on power compared with the old V8 (245kW v 253kW) but compensates with a far more muscular torque curve (440Nm from 2900-5300rpm) and reduced thirst (9.4L/100km). Transmission? Anything you like, as long as it's a seven-speed dual clutch.

Any lament for the V8's cultured warble is quickly forgotten when tapping into the new V6's reserves. It digs in with far greater stoicism from middling revs, yet still spins eagerly into the upper reaches. It preserves all the expected qualities of smoothness and general refinement, with only a slight low-revs drone when cruising drawing unwanted attention. Held wide open through the rapidly plucked gears, the S4 feels seriously swift rather than ridiculously rapid. Audi claims 0-100km/h in 5.3 seconds for the 1685kg sedan, but the more pressing question is: will it stay with the twin-turbo 335i? The definitive test awaits, but with the Audi packing an extra 20kW and 40Nm, but penalised by an additional 75kg, it'll be close.

More telling will be the issue of dynamics, because it's here the S4 really redresses its previously dead-ordinary game. Although this claim does come with a couple of provisos — the launch in Queensland only gave us the chance to drive an example equipped with the rear limited-slip sports differential packaged as part of the $6700 'drive select' option. The effects of the sports diff feel pronounced as soon as driving intensity rises, but first you need to configure your preferences for steering assistance, level of electronic damper control and gearbox shift speed, which some owners may love, but I reckon is more a marketing affectation than a genuine breakthrough for keen drivers.

The steering has reasonable weight and directional sense in the most dynamic mode, but never feels entirely natural or organic. Much better is the body control, which remains resolutely poised through fast undulations, while the suspension blots up big hits and rarely allows crash-through.

Yet it's the sense of improved balance and greater involvement of the rear end that really stands out. The sullen nose-heaviness of the old model is gone, replaced by more eager turn-in and loads less understeer. Push the chassis hard and the benefits of the sports diff are felt with small but agreeable levels of rear-steer, and power-down traction on wet roads that would leave a 3 Series driver either sideways or in an ESP-flashing frenzy.

Then there's the cabin, which is more stylish and better detailed than the slightly dour 3 Series effort. But whether S4 can woo 335i buyers is a question for another day. Right now, what's important is this is a proper Audi sports sedan that will never ask you to pass it a tissue in a Jennifer Aniston film. 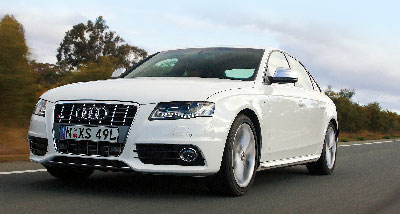 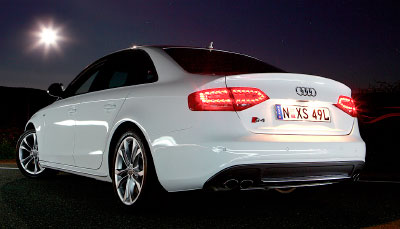 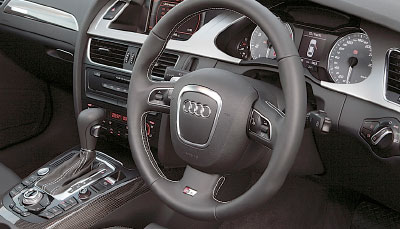