It’s back to the future with Mazda’s fourth-generation MX-5. Shorter than the original and with a smaller engine, it focuses almost solely on the driver for a pure wind-in-your-hair experience

It’s back to the future with Mazda’s fourth-generation MX-5. Shorter than the original and with a smaller engine, it focuses almost solely on the driver for a pure wind-in-your-hair experience.

WHAT IS IT?
The world’s best-selling roadster and Mazda’s fun-to-drive hero car. Front engine, rear-wheel-drive and powered by new four-cylinder engines, the latest ND-series MX-5 is for those who enjoy the drive.

WHY WE’RE TESTING IT
It’s an all-new model and comes with the smallest engine ever offered in the MX-5, a 1.5-litre based on that used in the Mazda 2. It’s a drip-feed launch campaign with the base engine wheeled out ahead of the flagship 2.0-litre.

MAIN RIVALS
Toyota 86 and Subaru BRZ are the most obvious because of their similar fun-fun ethos, even if they both have fixed roofs. The upcoming Fiat roadster – which is based on the MX-5 and will be built in the same factory – will also get some attention.

THE WHEELS VERDICT
Raises the roadster driving bar and a fantastic demonstration of the importance of power-to-weight.

PLUS: Peppy 1.5-litre surprises; beautifully balanced; simple but elegant interior
MINUS: No glovebox and limited storage; steering is sharp but lacks liveliness

THE WHEELS REVIEW
AUDIOPHILES will tell you there’s something better about listening to the analogue sound reproduced by vinyl. Even with the crackles and hissing, the purity of sound is said to be closer to the intended notes before Dolby, Sony and billions of 1s and 0s apparently made listening life easier.

In modern motoring the MX-5 is one of the closest things on four wheels to a classic EP. Simple, faithful and largely unfazed by technology. That mantra continues in fourth-generation ND guise, which we’ve sampled in prototype form in Spain.

While MX-5s have been evolving since the first in 1989 – roughly when CDs overtook vinyl in popularity – it was the Car of the Year-winning original that provided the inspiration for the newest model. While acknowledging the contribution of the second- and third-generation MX-5s, there’s clearly a soft-spot with designers and engineers for the early NA.

Countering a trend towards bigger and heavier, the new MX-5 is the shortest of the breed by 40mm. Yet it’s the widest MX-5 yet and has shorter overhangs front and rear.

Weight reduction was key, with more high-tensile steel, less cast iron, and aluminium employed for the boot, bonnet, front fenders, various soft-top components, and front and rear bumper enforcements. Some suspension components – wishbones up front and multi-link out back – and the engine frame are also aluminium, helping lower the centre of gravity and counter yaw.

The centre of gravity is closer to the ground thanks to an engine that sits 13mm lower and is shifted 15mm rearward. Reduced overhangs and clever design cues – the tapered rear corners and more heavily raked windscreen – create a sportier look.

It’s a different feel from the cabin, too. MX-5 enthusiasts will be used to scrounging for places to store odds and ends, but they’ll now be doing so without the luxury of a glovebox.

The dominant wheelarches provide a visual reference to the forward extremities, the central tacho reinforces purpose. That windscreen is deceptively close; you can inadvertently tap the glass while twirling the wheel.

Throw in the obligatory 50-50 weight balance and it amounts to a poised and animated machine. It feels precise and alert, albeit lacking the lively feel to return the wheel to centre.

While there’s some pitching under brakes, the body is controlled through bends; the lack of kilos certify the MX-5 as lithe and agile. Challenging mountain roads ultimately exploit the limits of the 16-inch Yokohamas, further revealing the joys of the chassis. Push too hard and it gently understeers, then feed on throttle and coax some oversteer.

The biggest surprise, though, is the engine. The 1.5-litre is the smallest to grace an MX-5 (with 96kW and 150Nm it almost exactly matches the 1.8 that was fitted early in the roadster’s life). Modest, then – at best.

Based on the 2’s engine, it gets a new crankshaft, unique head, unique block and new inlet and exhaust manifolds. But with the 1000kg frame (it’s difficult to think the marketing department didn’t have a hand in that one…), it makes for frisky performance. It happily spins to 7500rpm and pulls deliciously from 2000rpm.

The sound and vibration, too, are in sync with the car’s playful DNA, with adequate rumble and a gritty roar – with a breath of induction wheezing on initial throttle applications – adding to the multi-sensory sensation.

The close-ratio six-speed snicks beautifully between ratios with computer-game accuracy, but more realism and fun.

There’s meaningful bite to the brakes; despite our concerted efforts down a twisting, flowing mountain pass, we couldn’t kill them.

Like that original NA model, there’s a personality and perseverance that make the latest ND a riot of a machine, without a licence-losing bruise. It’s a pleasant way to get some wind in your hair but will equally devour challenging tarmac as though it’s having as much fun as you.

A bit like vinyl. Now, time to find my old turntable… 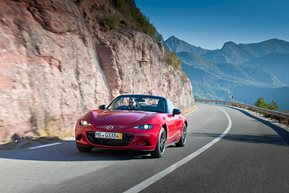 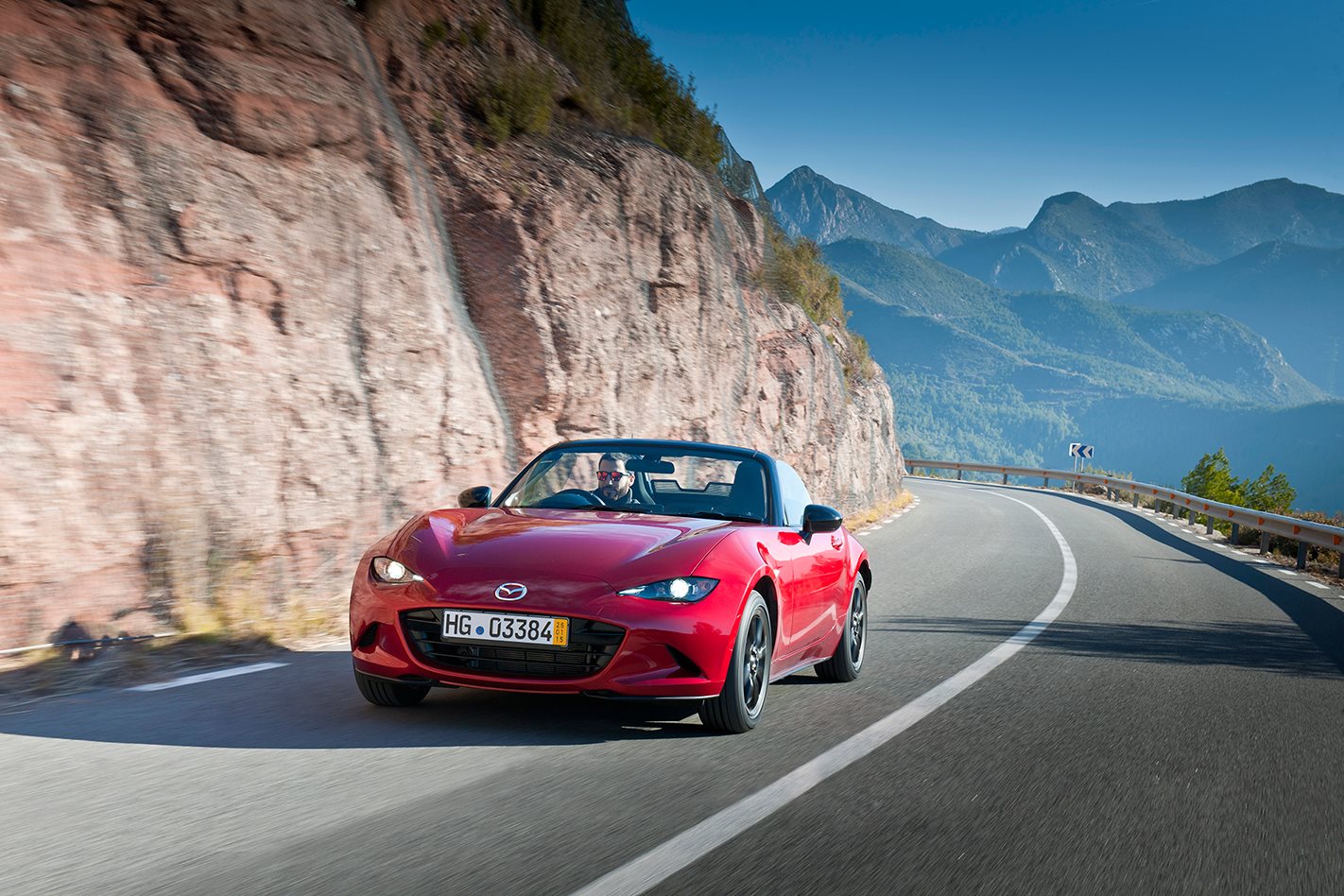 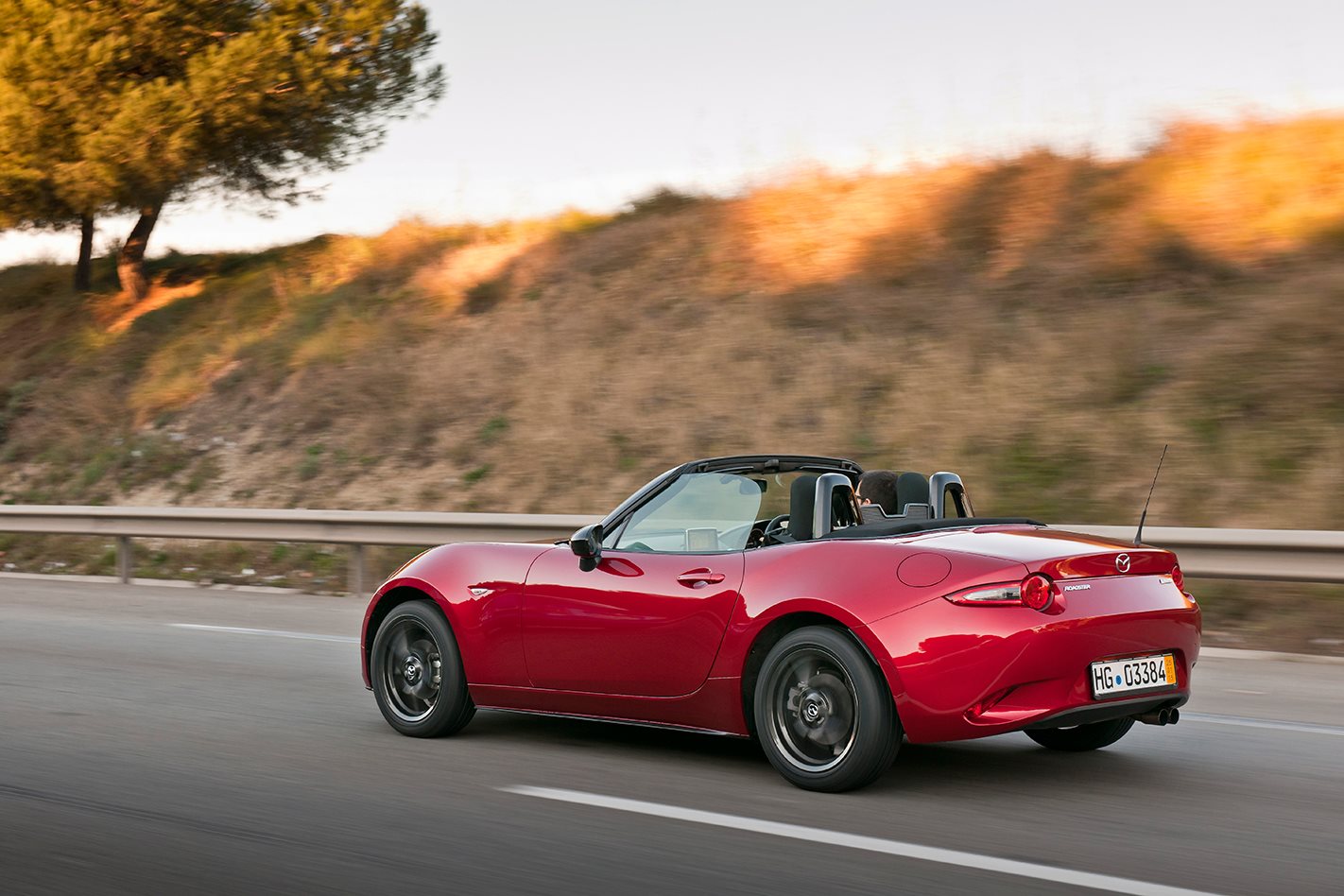 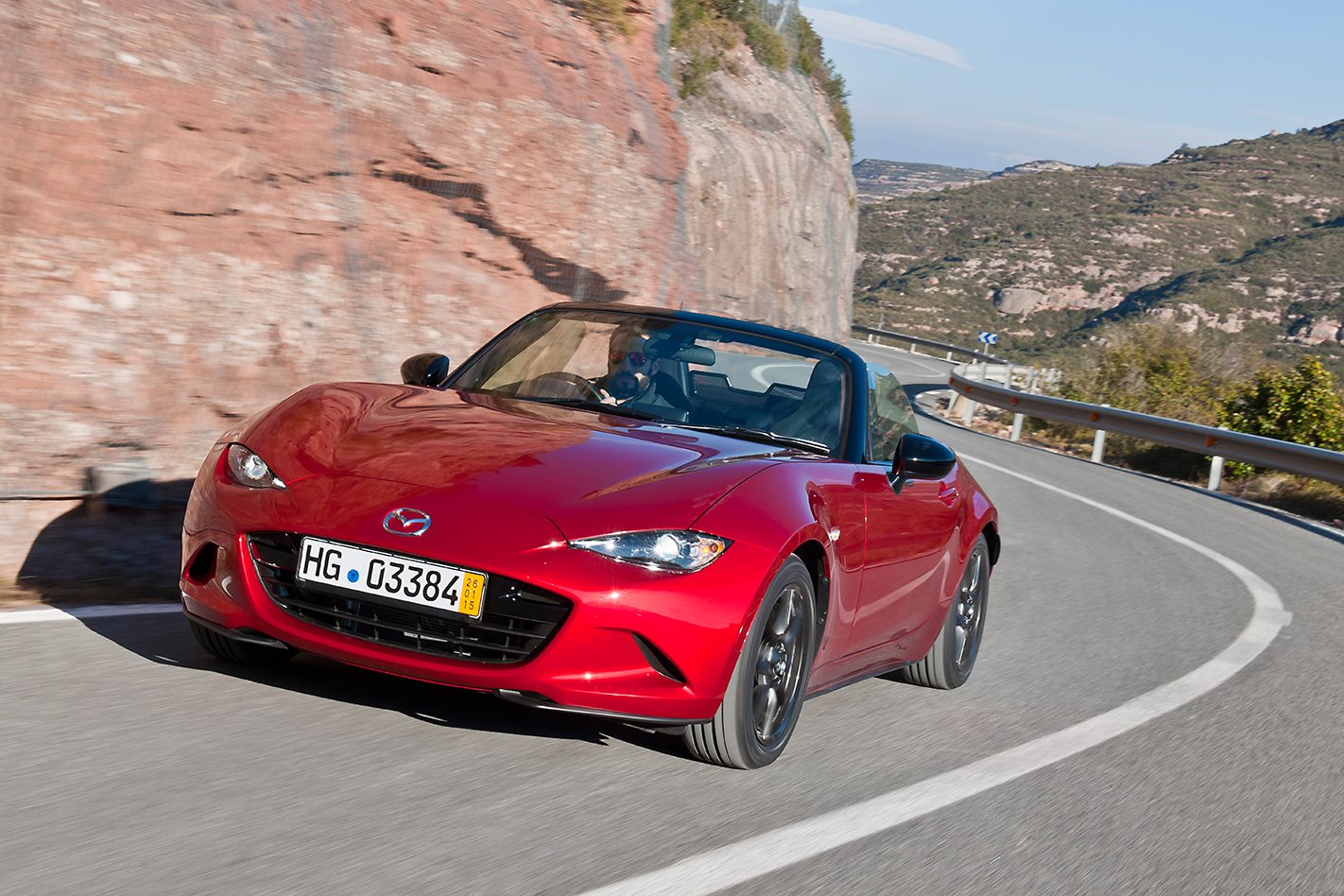 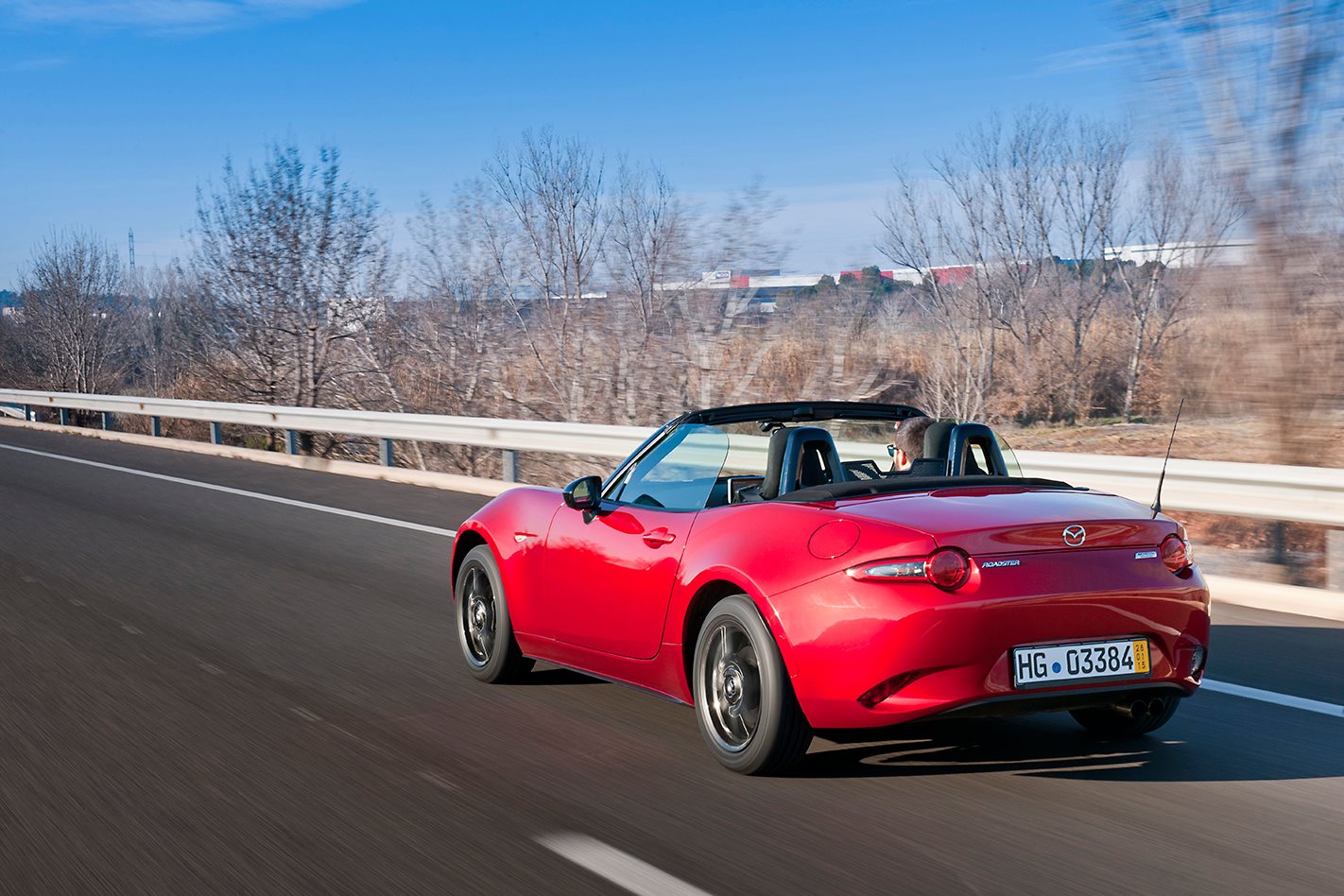 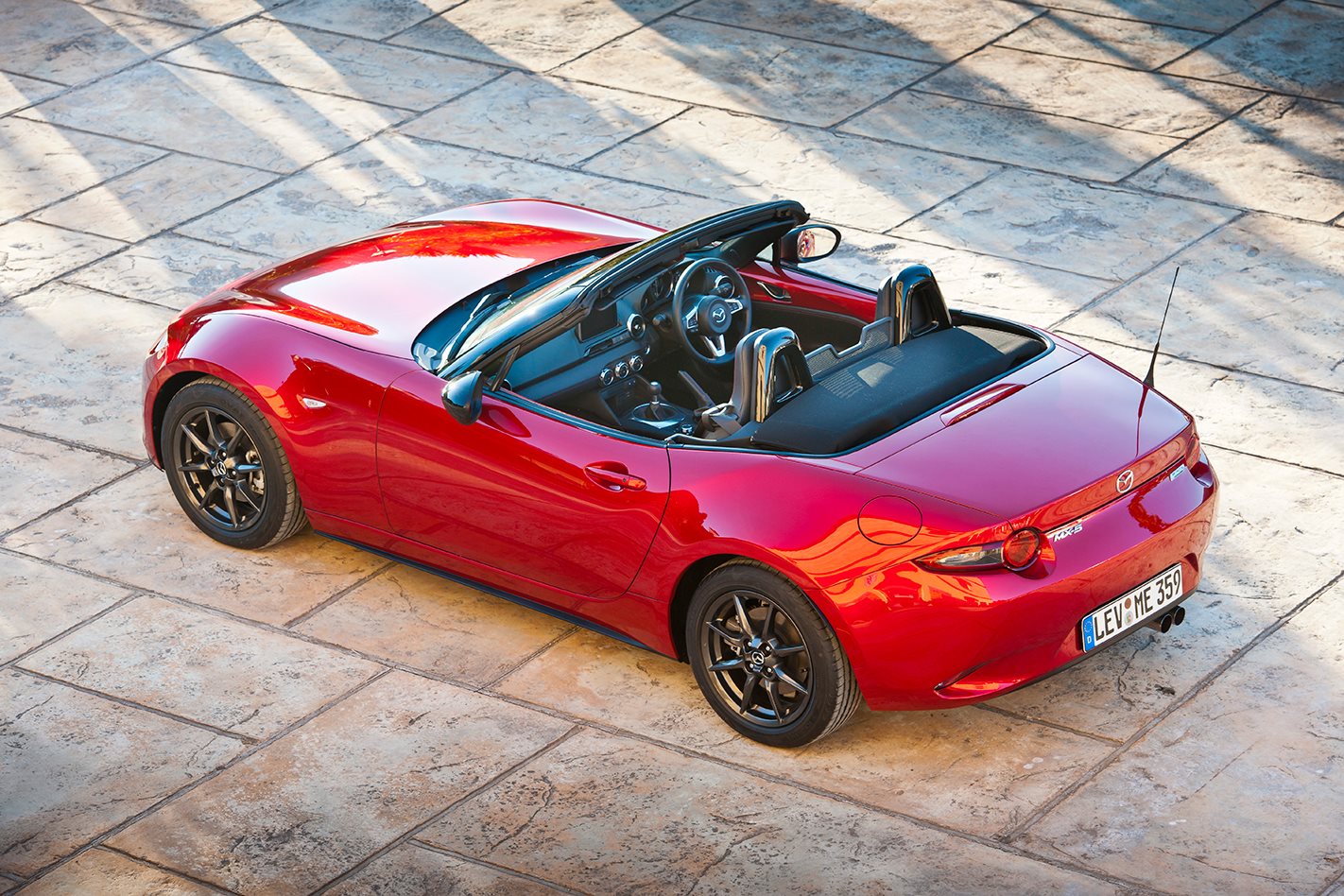 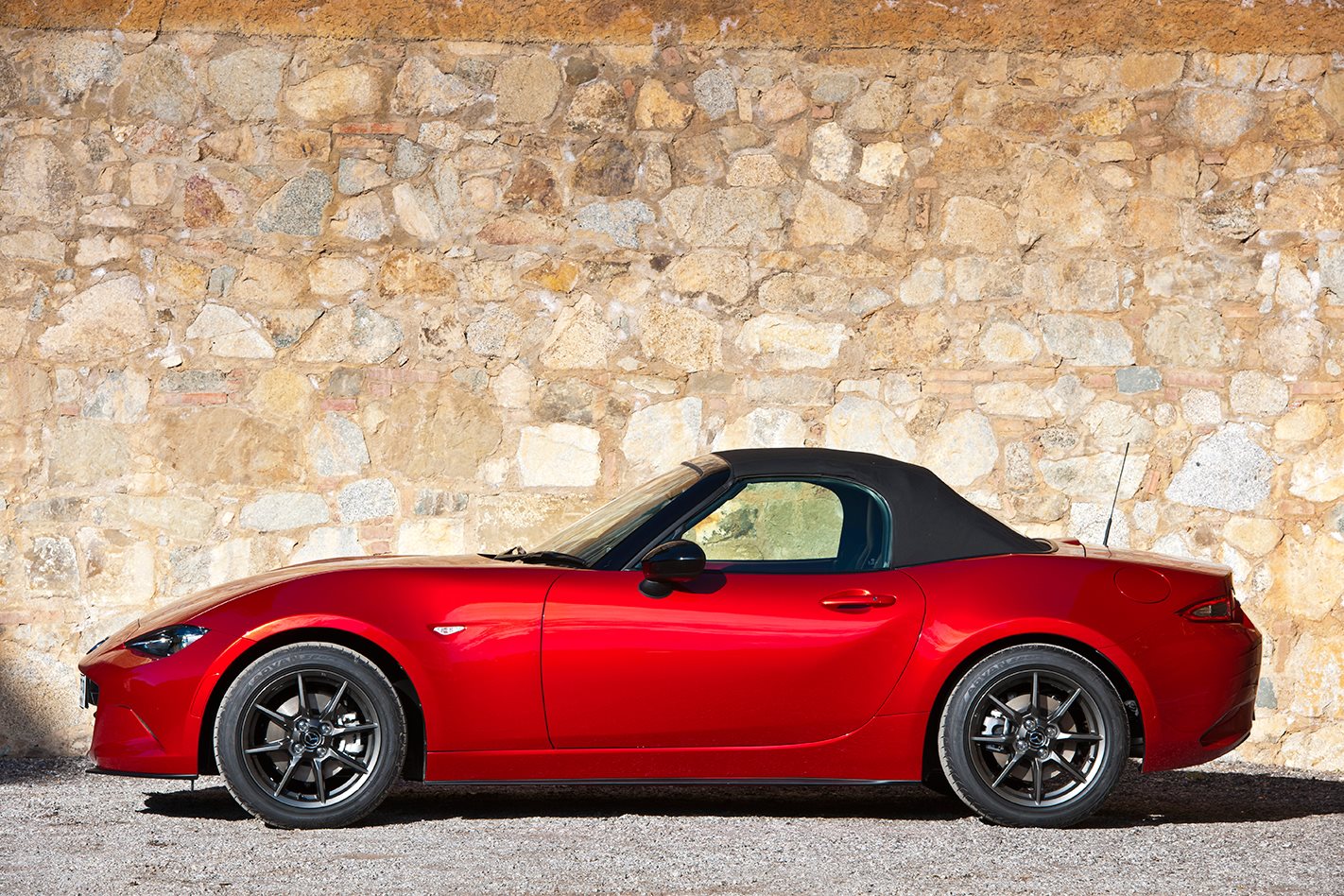 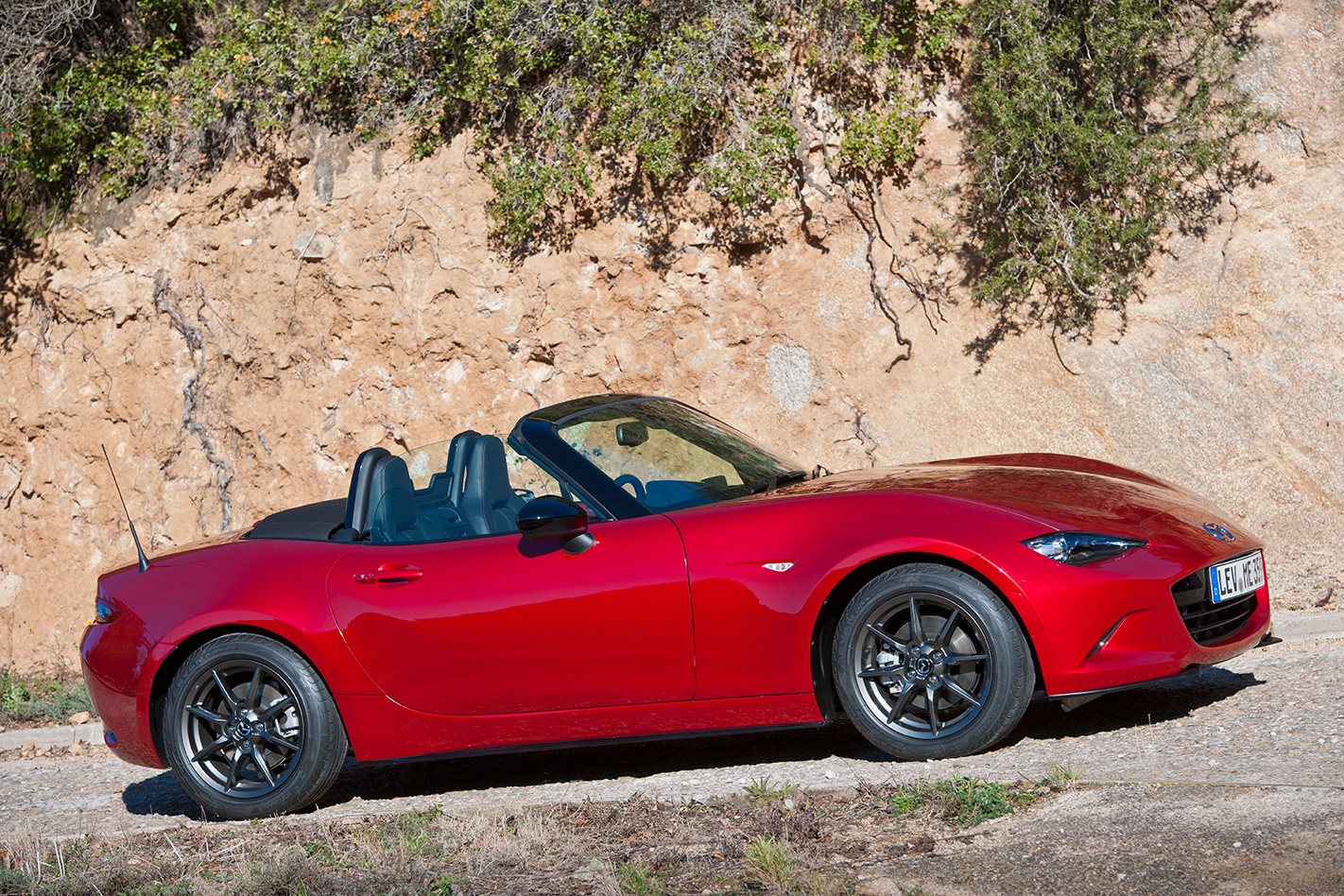 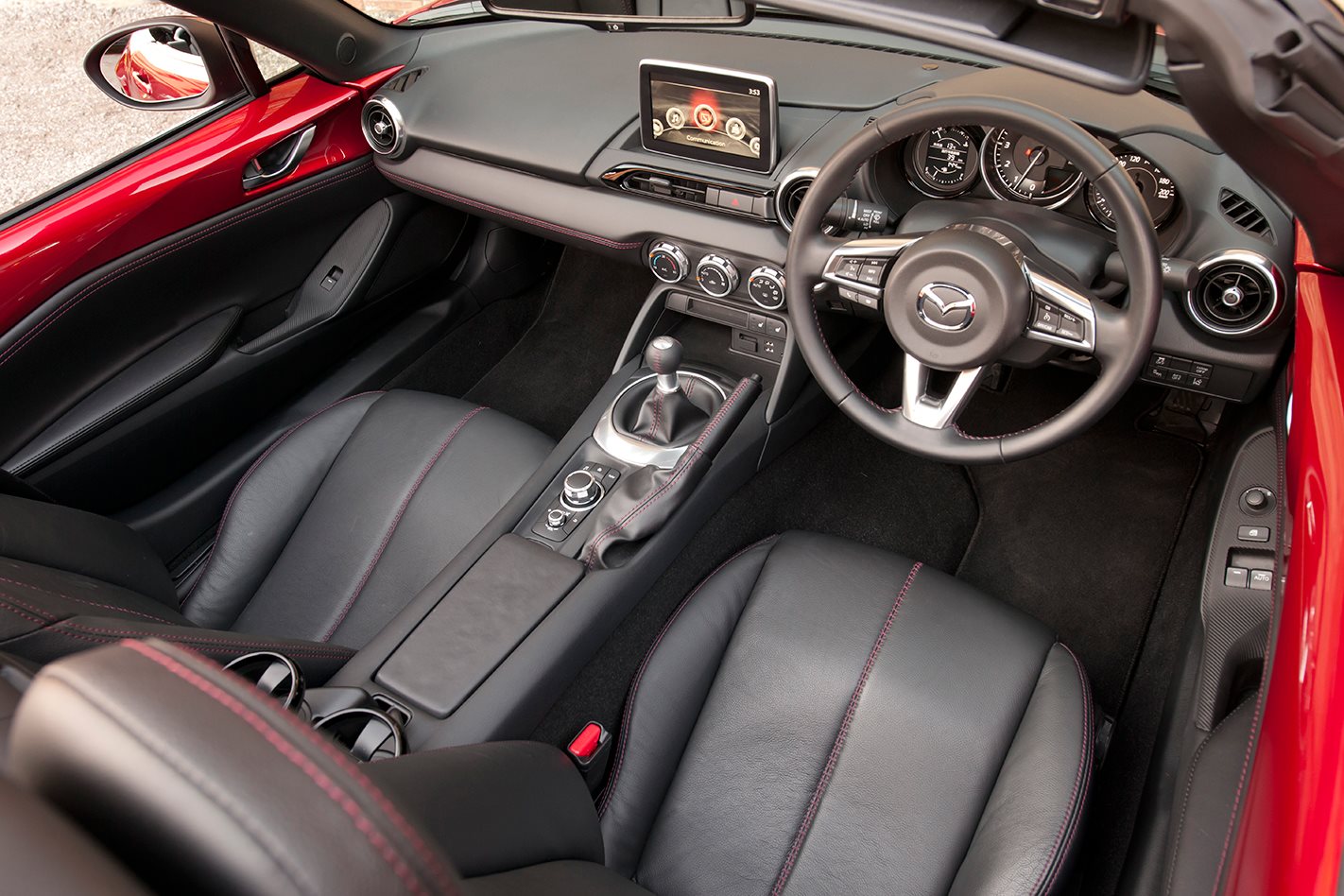 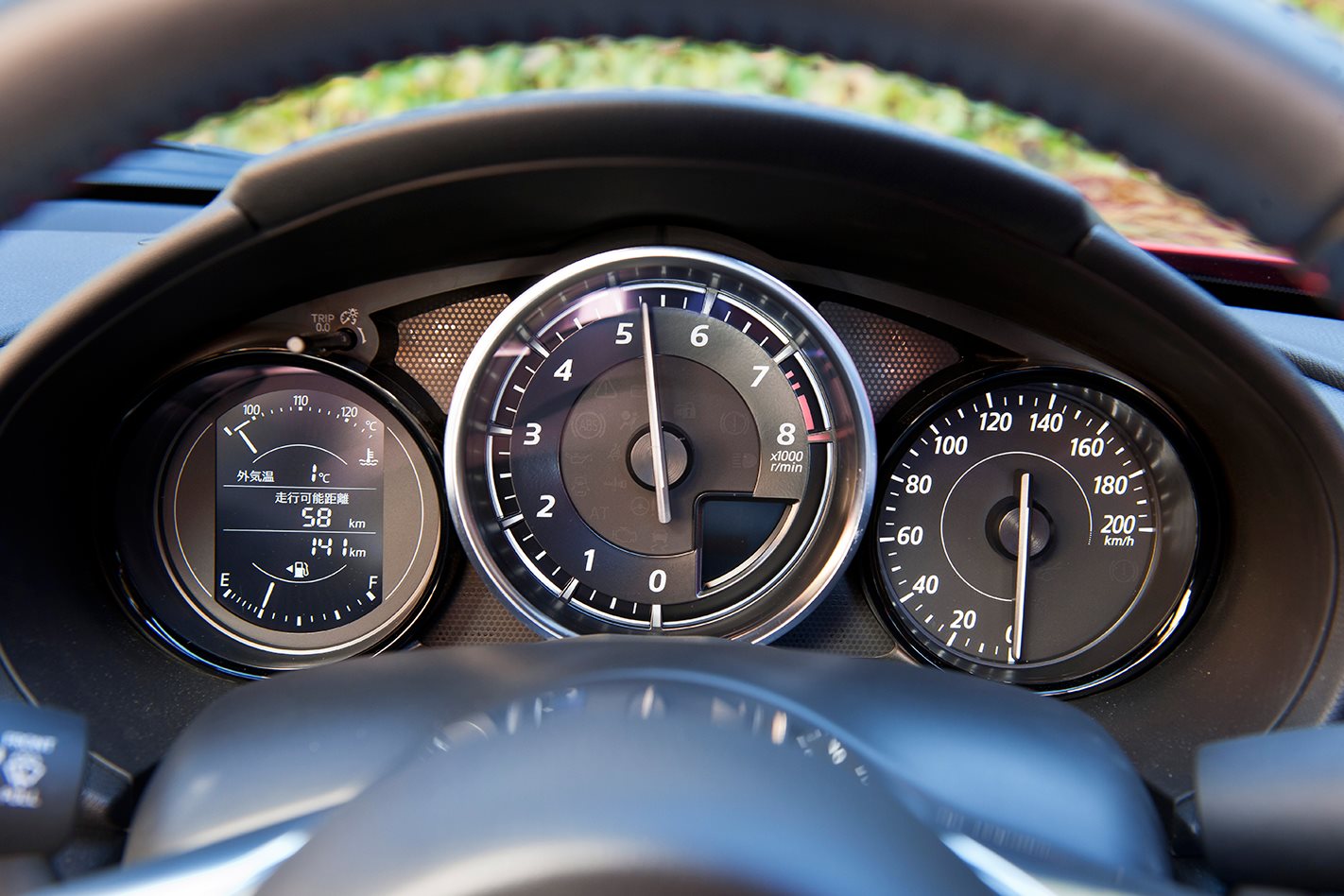 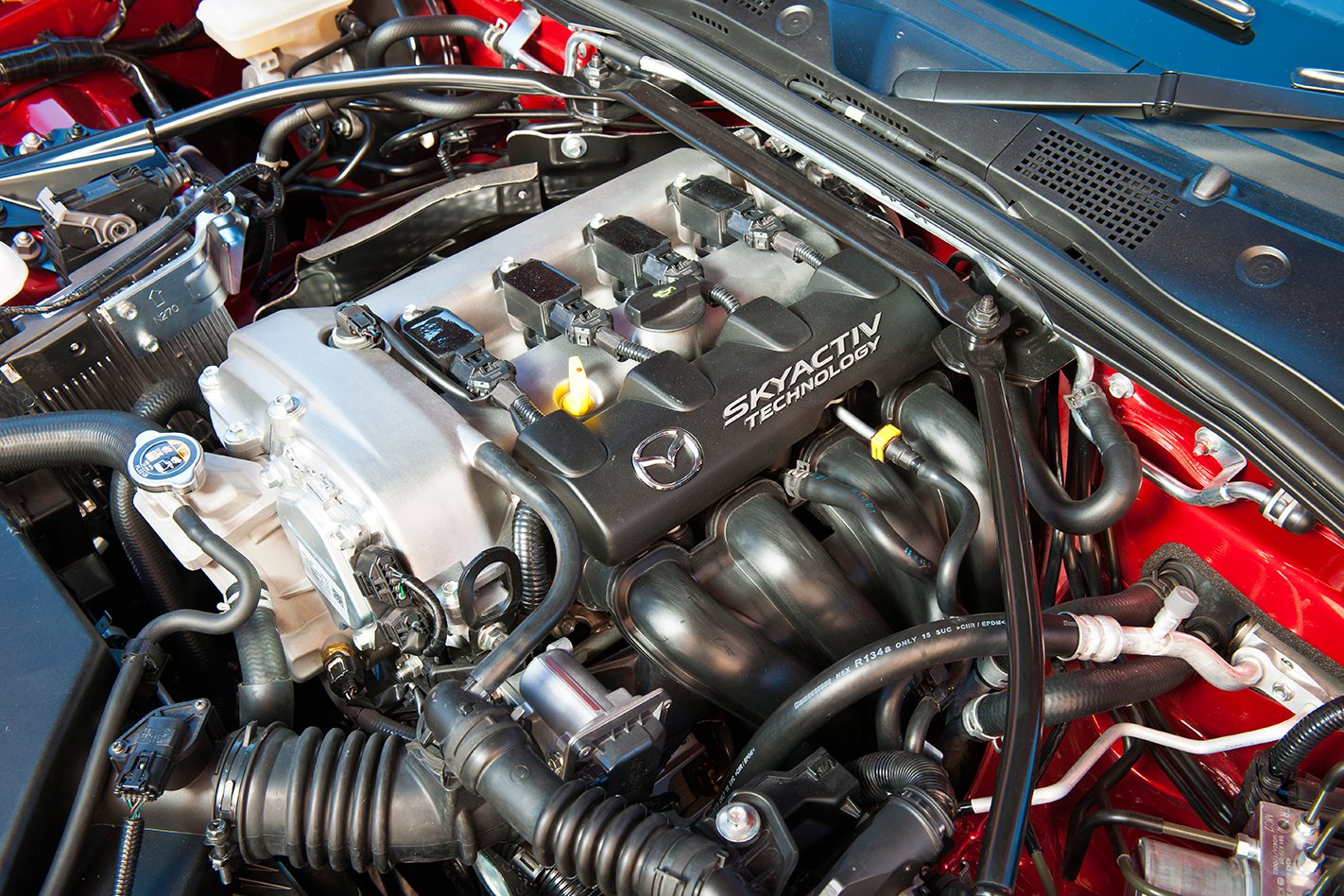