The Silvretta Alps mountain range is home to some of Austria’s most challenging alpine twisties, and today it’s playing host to a world exclusive drive of epic proportions.

We have our mitts on the baddest Mercedes ever made, an AMG GT-S – nastier even than last year’s SLS Black. When it lands in Australia in the middle of 2015, it will be the fastest accelerating offering from the three-pointed star.

Facing off against the Affalterbach special is the 911 GTS, which fuses elements of the GT3 with the DNA of the Carrera S. Boasting flared arches, performance-oriented details and a go-faster cabin treatment, this model is an integral part of a range which stretches all the way from 257kW Carrera to 412kW Turbo S.

For two days we’ll punish these dynamic Germans on challenging mountain passes and open autobahns in the ultimate front- versus rear-engine coupe comparo.

The passenger cell is short and wide, rear three-quarter visibility is compromised and the upright position behind the wheel is defined by the towering instrument panel, wide transmission tunnel and the too-close-for-comfort rear firewall. The interior is garnished with round air vents, a high-definition in-dash colour monitor, a blend of soft leather and matte carbonfibre inlays and a busy centre stack. Externally, the prestige of the low-flung GT-S is owed to the gleaming diamond grille and a pair of piercing triple reflector headlights complete with characteristic LED eyebrows.

To unsuspecting bystanders, the GTS is just another 911. In reality, the latest wide-body iteration wants to be the sportiest model this side of the super-potent halo specials. To stress the GT3 connection it comes with black 20-inch wheels, blacked-out bi-xenons, select aero-kit elements, low-drag mirrors, a made-to-measure rear apron, four black tailpipes and two lines of solid black badging on the bumper below the adjustable tail rudder.

Inside, we find snug sport seats, an alcantara-wrapped helm as well as special GTS cues like new instrument graphics and charcoal aluminium trim. In contrast to the AMG, the 911 has a more spacious cabin and optional rear seats despite its more compact dimensions. While it doesn’t take long to get used to the 911’s idiosyncrasies, it’s hard to pardon the absence of a multi-functional steering wheel and driver assistance systems including blind-spot monitoring and lane departure warning.

What better road to test the accelerative abilities of these German GTS twins than the lightly-trafficked Munich-Lindau autobahn that leads to the Austrian and Swiss border.

Heading toward the nation of neutrality aboard the AMG you can instantly feel, in the small of your back, the kick of the explosive twin-turbo V8, which loads the seven-speed dual-clutch transaxle with a massive 650Nm – on tap between 1750 and 5000rpm – with the Dynamic Plus pack fitted. Its mid-range acceleration is irresistible and you can treat yourself to the full urge of the 4.0-litre 375kW engine all the way to the 7200rpm redline.

The 316kW 911 GTS whips up an extra 22kW over the Carrera S, but it only does so above 6300rpm when a vacuum flap opens the second intake tract. Maximum torque is an unchanged 440Nm, though it now takes 5750 instead of 5600rpm to manifest. In a straight line the GTS is only marginally quicker than its lesser-powered sibling thanks to less favourable aerodynamics, slightly higher weight and wider tyres. So, it’s worth asking whether the new model is worth the extra cash. The answer is an emphatic yes. On the autobahn a combination of higher revs and later upshifts keeps the 911 in the slipstream of the AMG GT-S.

The ability of the Porsche to carry more torque through the gears allows more momentum and pushing power to play with. At the end of the long straight of autobahn leading to Lake Constance on the Rhine, the Porsche tops out at 307km/h. It is thus almost as fast as the Merc, but it takes quantifiably longer to squeeze out the final 25-30km/h.

Both cars excel on the race track. After all, both cars have honed the dialogue between input and response to perfection and both are wonderfully intuitive when driven hard. On a cordoned-off circuit, the Porsche begs you to hit Sport Plus which firms up the dampers, tops up the gearbox with adrenalin and puts the black box on alert.

Unlike previous generations of the 911, the 2015 911 GTS driven at nine- or ten-tenths won’t bite back. Instead, the latest breed displays a high degree of confidence-inspiring adaptability and transparency. Even when shod with extra-wide tyres – in this case 245/35 R20 Pirelli P Zeros up front and 305/30 R20 at the back – the handling is now modular, the breakaway characteristics nicely progressive and the attitude at the limit quite failsafe.

Not available in the 911 is an equivalent to the Merc’s Dynamic Select feature which allows you to choose from four different personalities when tweaking steering, throttle response, ride comfort, transmission strategy, engine sound and stability control.

Alternatively, the GT-S lets you put together your own personalised set-up. In Sport Plus and Race mode, the chips will blip the throttle during downshifts, clear the exhaust for maximum noise and speed up the entire throttle-to-wheel chain of command. At the same time, the shock absorbers flex their hydraulic muscles, the steering beefs up, the transmission concentrates on late upshifts and early downshifts and the ESP locks itself in handling mode; AMG-speak for controlled power oversteer. Unfortunately, the Porsche doesn’t come with such a risk-reducing stability control setting.

Before heading for the mountains, we stop for petrol and conduct a quick check of fuel guzzling habits. Over 811km the AMG’s V8 averaged 15.1L/100km, whereas the 911’s flat-six was content with 13.9L/100km. Somewhat anti-climactic, but alas, on to the mountains!

The northern climb to the Silvretta dam and summit – 2037 metres above sea level – favours the Porsche. The climb begins with a series of two dozen first-gear switchbacks. As it gains elevation, the road remains narrow and the terrain becomes tricky due to the low-grip surface that encourages early understeer and late oversteer, as if driving on snow. The approach from the south is better suited to the bigger and brawnier AMG GT-S as most direction changes will happily accept third or even fourth gear – with the exception of a few hairpins near the top.

With ESP in handling mode, the AMG GT-S is virtually unbeatable on the fastest stretches of this panoramic spiral climb. Laying down the full grunt can be a momentary struggle through first- and second-gear kinks, but once it pulls away the Mercedes licks up the road like a hungry lizard.

The 47:53 weight distribution, electronic diff, sticky Pirellis, ground-hugging centre of gravity and aluminium double-wishbone suspension make this car feel agile and alert. You’ll want to be in Sport Plus on demanding turf like this. Why? Well, the initially light steering now feels firm and meaty, the gearbox is eager to kick in the next ratio and moderate throttle input is all it takes to attract the engine’s attention.

The 911 can’t pull off as many dynamic tricks. Furthermore, Porsche puts an extra price on goodies like variable-effort steering, sports suspension and dynamic chassis control (PDCC). Carbon-ceramic brakes cost extra no matter whether you shop at Porsche or Mercedes, and in the case of the 911 you’ll also have to spend big for the dual-clutch tranny.

Thanks to the bespoke suspension setting, the fatter tyres and the wider track, though, the 911’s front-end sticks through a corner with more vigour than the AMG. At the same time, the rear end carves around in G-force-defying follow-me fashion until ESP eventually flashes its warning. The chassis of the Merc could do with more compliance for added control and confidence. Who would have thought that, when maxxed to the driver’s limit, the AMG is more challenging and less composed?

At the dawn of a new era devoted to downsizing, hybridisation, electro-mobility and fuel cells, V8s will soon be condemned as fossils from a wasteful past – so go and get one while you still can. Because nothing sounds like an eight-cylinder; because the blend of generous displacement and eager turbocharging never fails to excite; because a V8 is equally charismatic at a leisurely pace and at full song.

There is no doubt about it: the 3982cc kraftwerk is the soul and essence of the AMG GT-S. A similar hymn of praise can be sung for the flat-six installed in the 911. Now water-cooled, but in this particular application still normally-aspirated, the 3800cc motor makes all the right noises, is connected to the throttle pedal via a live wire and begs to be revved hard to deliver the goods.

Late in 2015, when the new 992 enters the scene, turbos will be mandatory across the range, so it’s now or never – unless your pockets go deep enough to afford the GT3.
Purists may prefer the boxer in combination with the seven-speed manual, but in case your left hoof has been numbed into early retirement by too many automatics, the PDK gearbox is a perfectly acceptable substitute to that third pedal.

So what’s the verdict? The Porsche 911 GTS is an emotional masterpiece. It combines the physique of the Carrera S with the heart of the GT3 while consciously avoiding the overly radical aspects of the winged warrior. It has nicely weighted steering which is damped and calibrated to perfection. It also has impeccable steel brakes, a wizard chassis engineered for an amazing ride-handling balance, a quick-shift transmission and an infectious engine. In this company, however, it could do with slightly more power and torque, and it needs to unpack its dynamic disciplines.

The AMG GT-S earns its merits as a compelling autobahn stormer, superfast long-distance cruiser and wholly superior SLS replacement with tonnes of street cred. Its transmission is intuitive, the brakes are razor-sharp, and the engine develops an incredible thrust as it storms through the rev range. Quite a touch heavier than the Porsche, the GT-S easily wins the cabin trophy, too. It’s more lavishly equipped, has a big enough and more practical boot, and oozes presence.

But the big AMG GT-S coupe needs wide roads, flowing curves, third- and fourth-gear sweepers and well ironed surfaces to shine. Its main weakness is its compromised packaging, while its suspension needs to be calmer at high speeds and smoother on bumpy roads. The Porsche 911 GTS, conversely, is the purer, more focused and more dynamic choice. The dynasty continues. 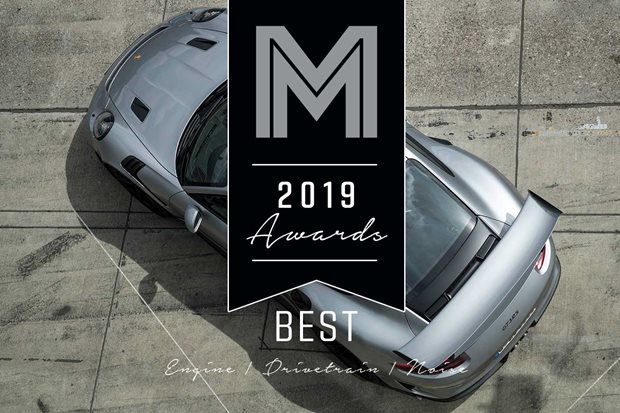 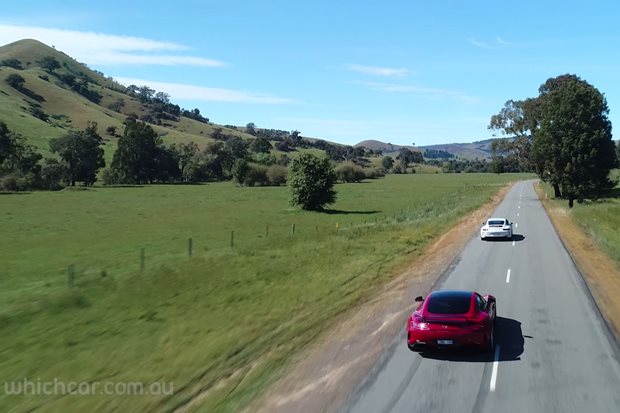 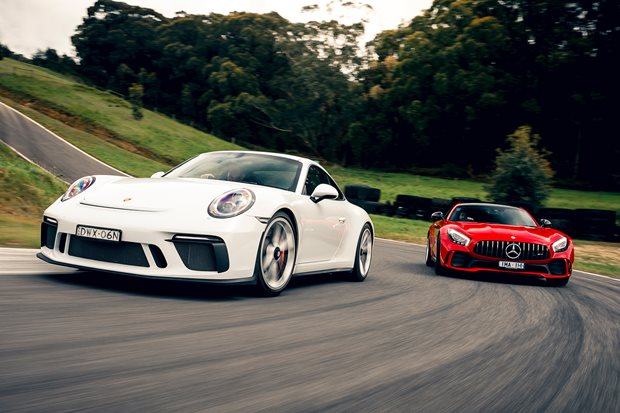 Mercedes-AMG GT R and Porsche 911 GT3 touring: divergent evolution and an ode to finding your joy 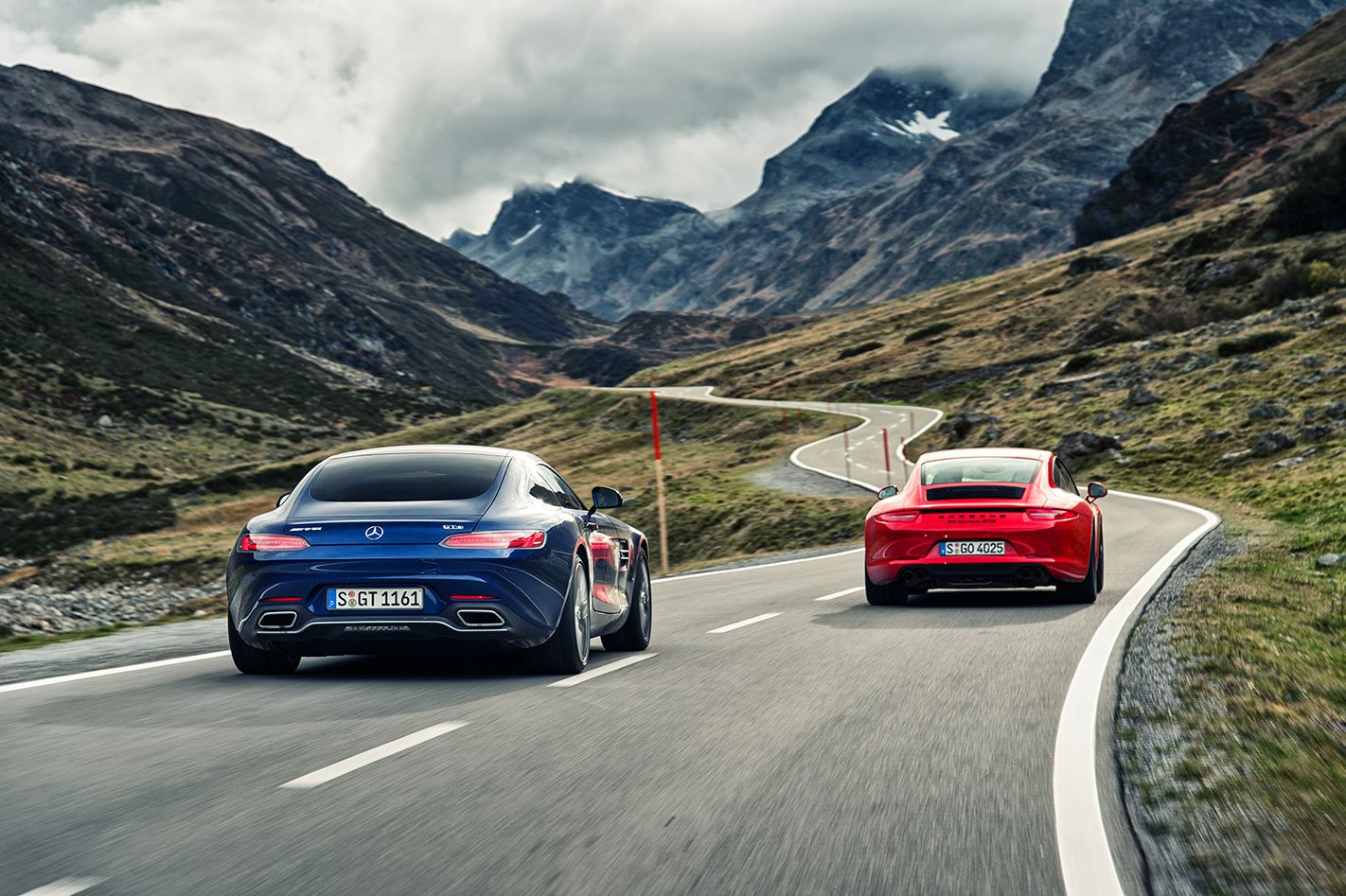 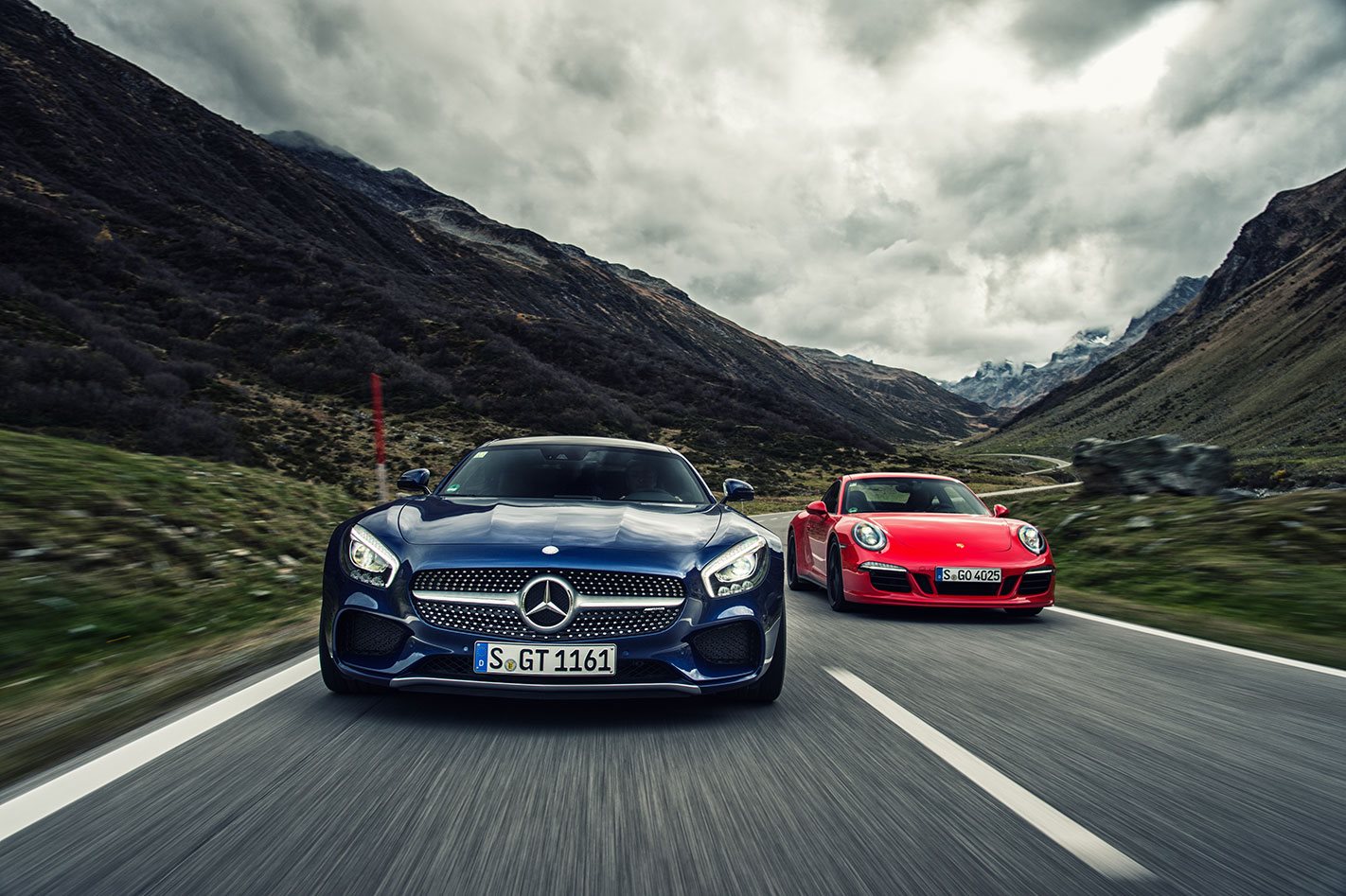 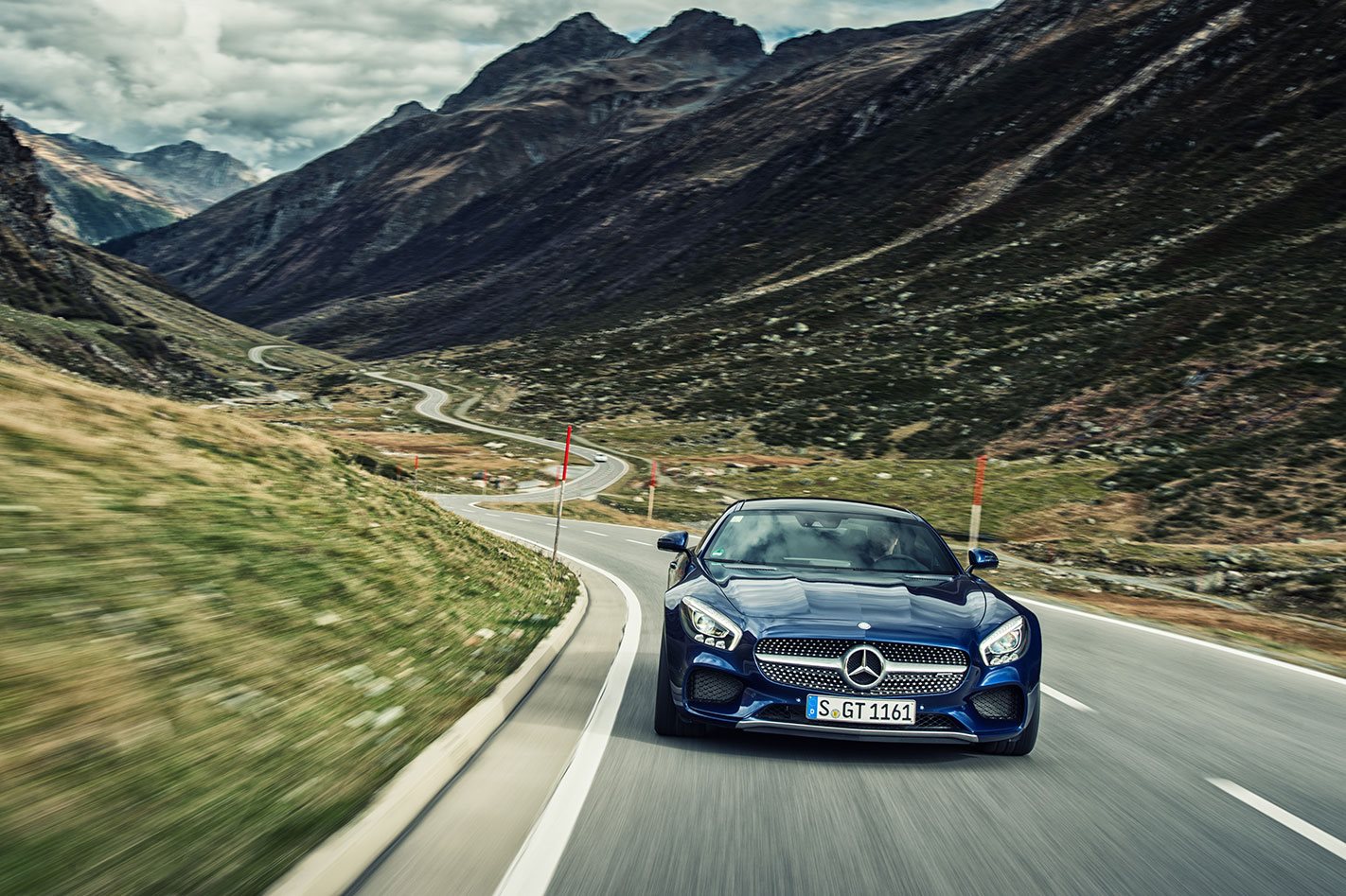 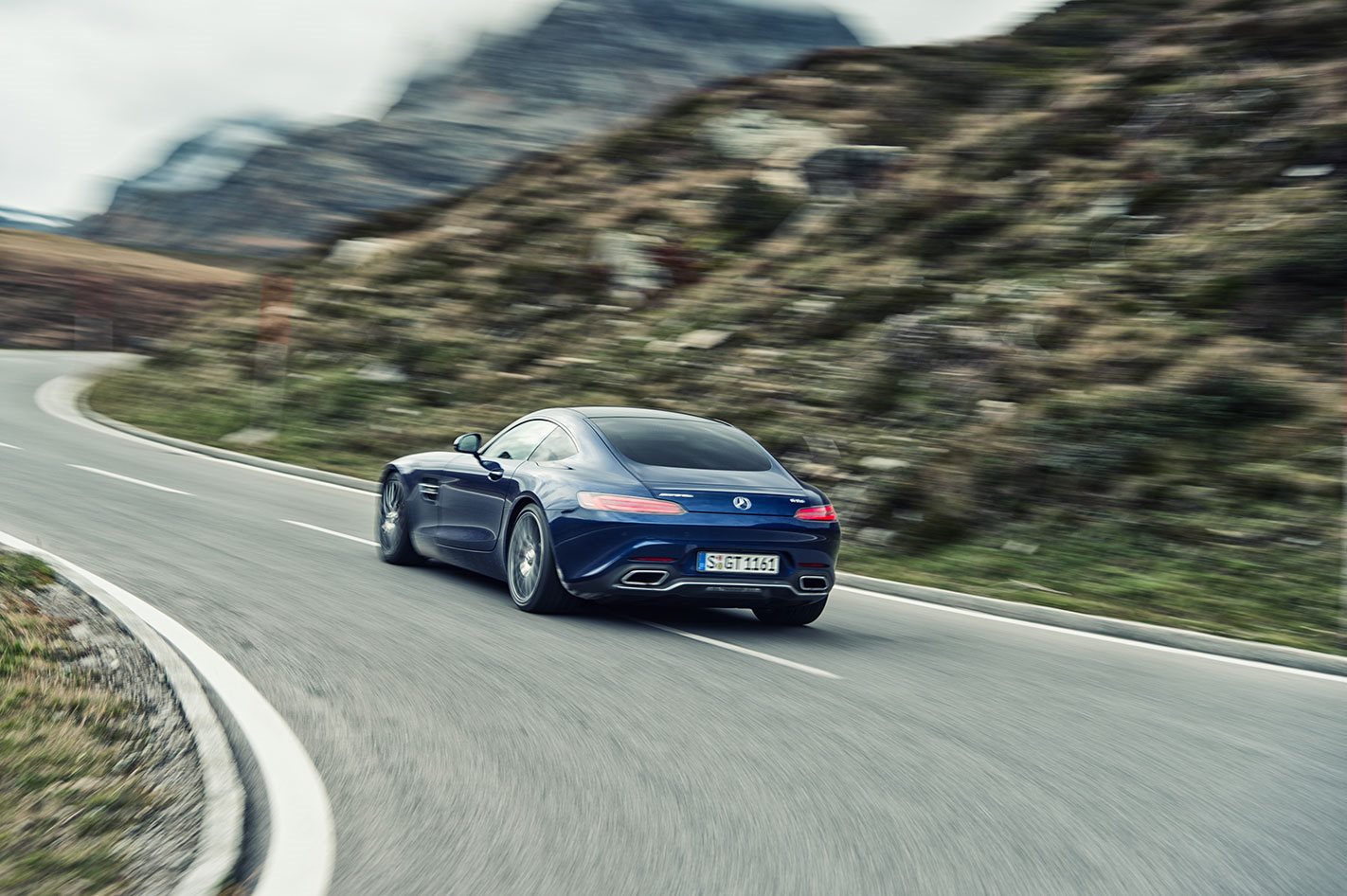 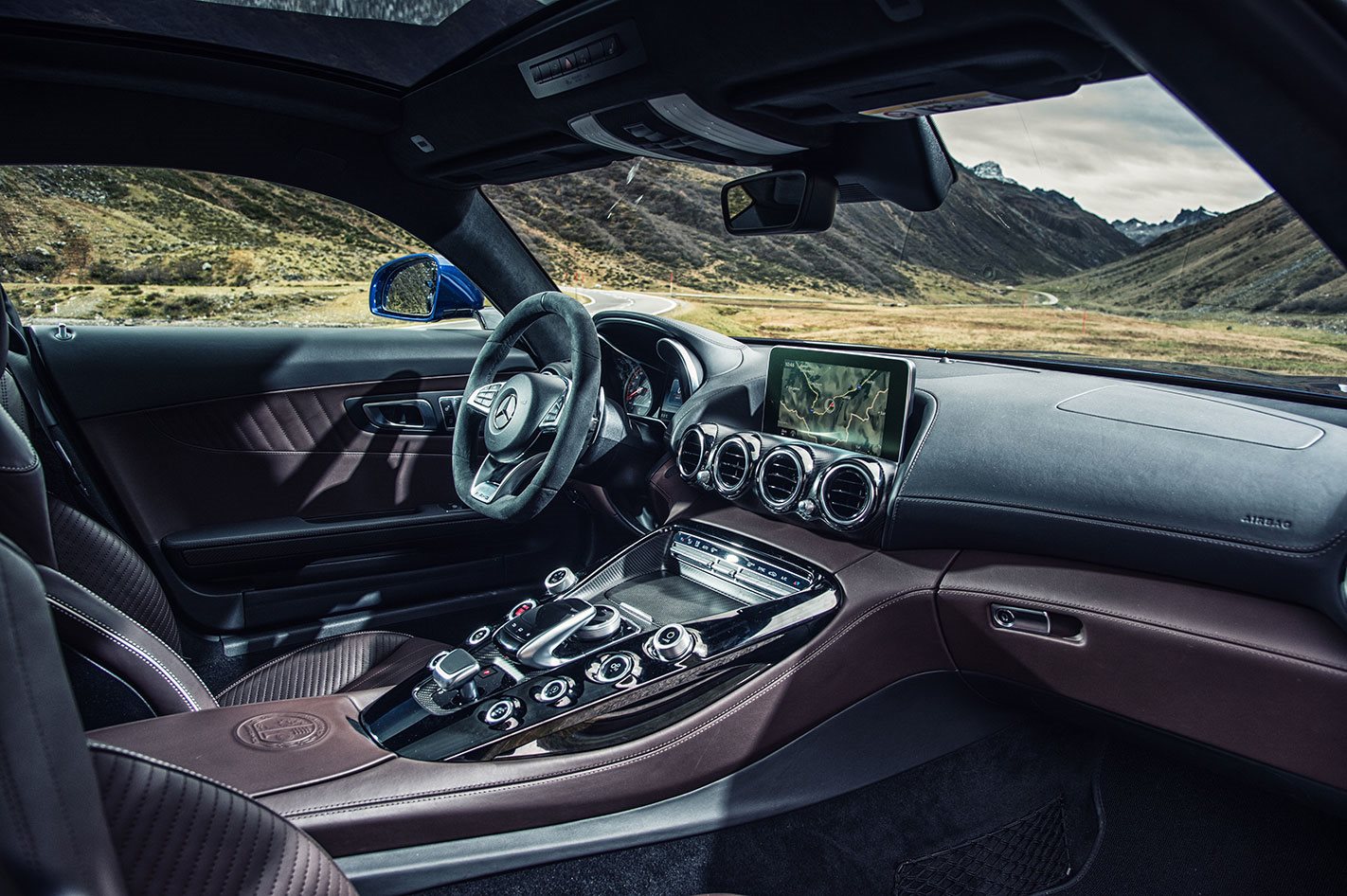 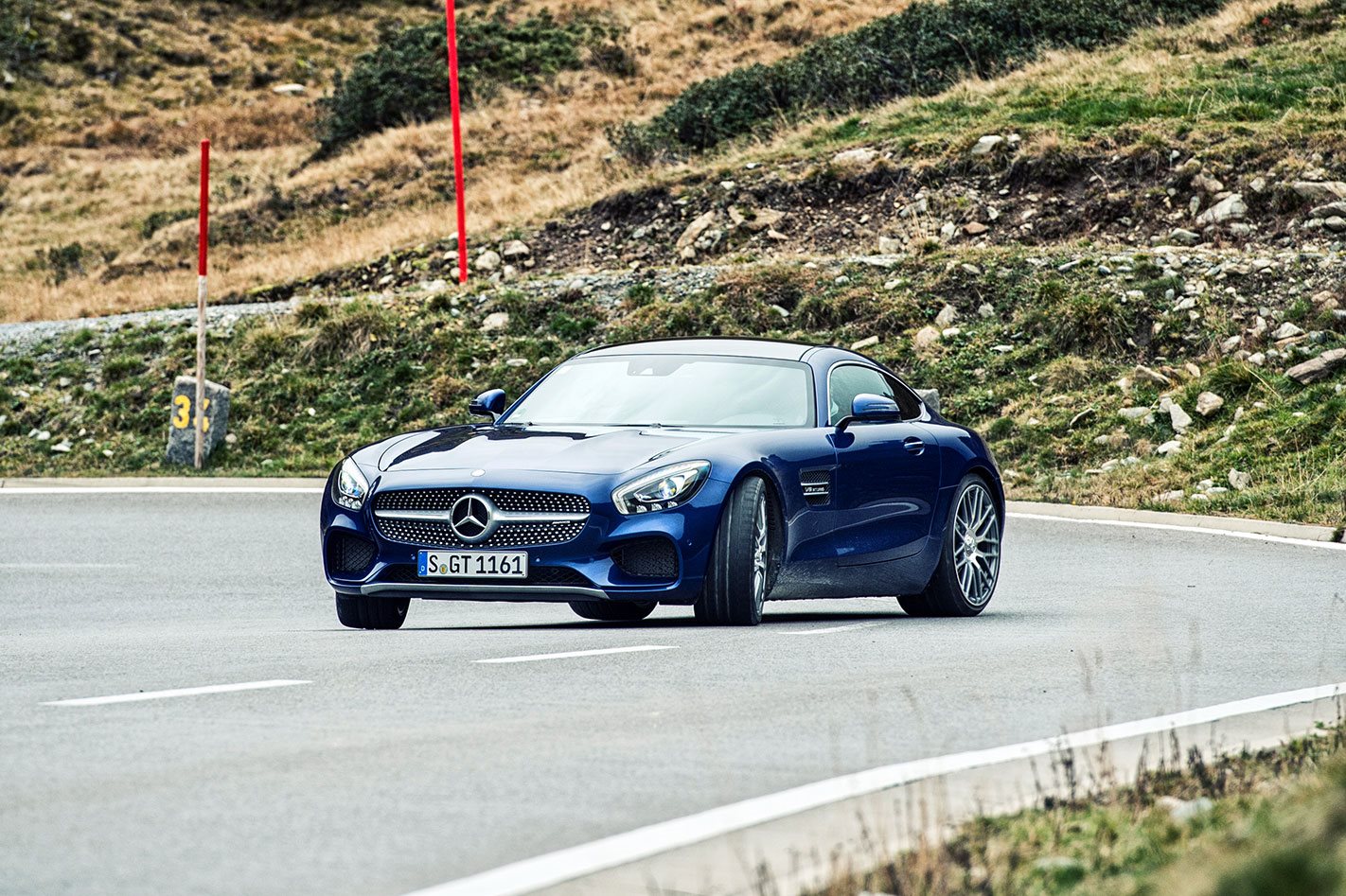 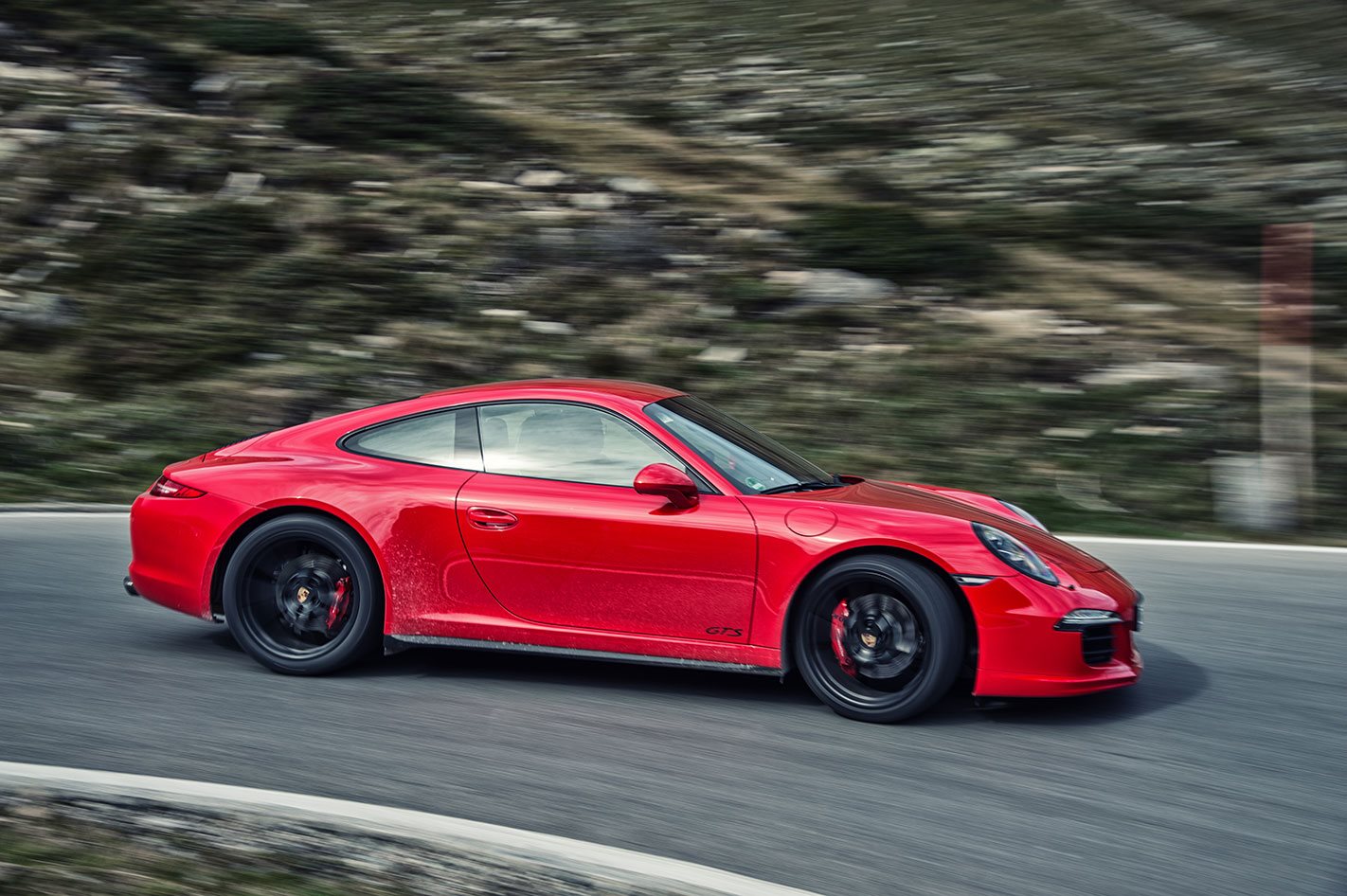 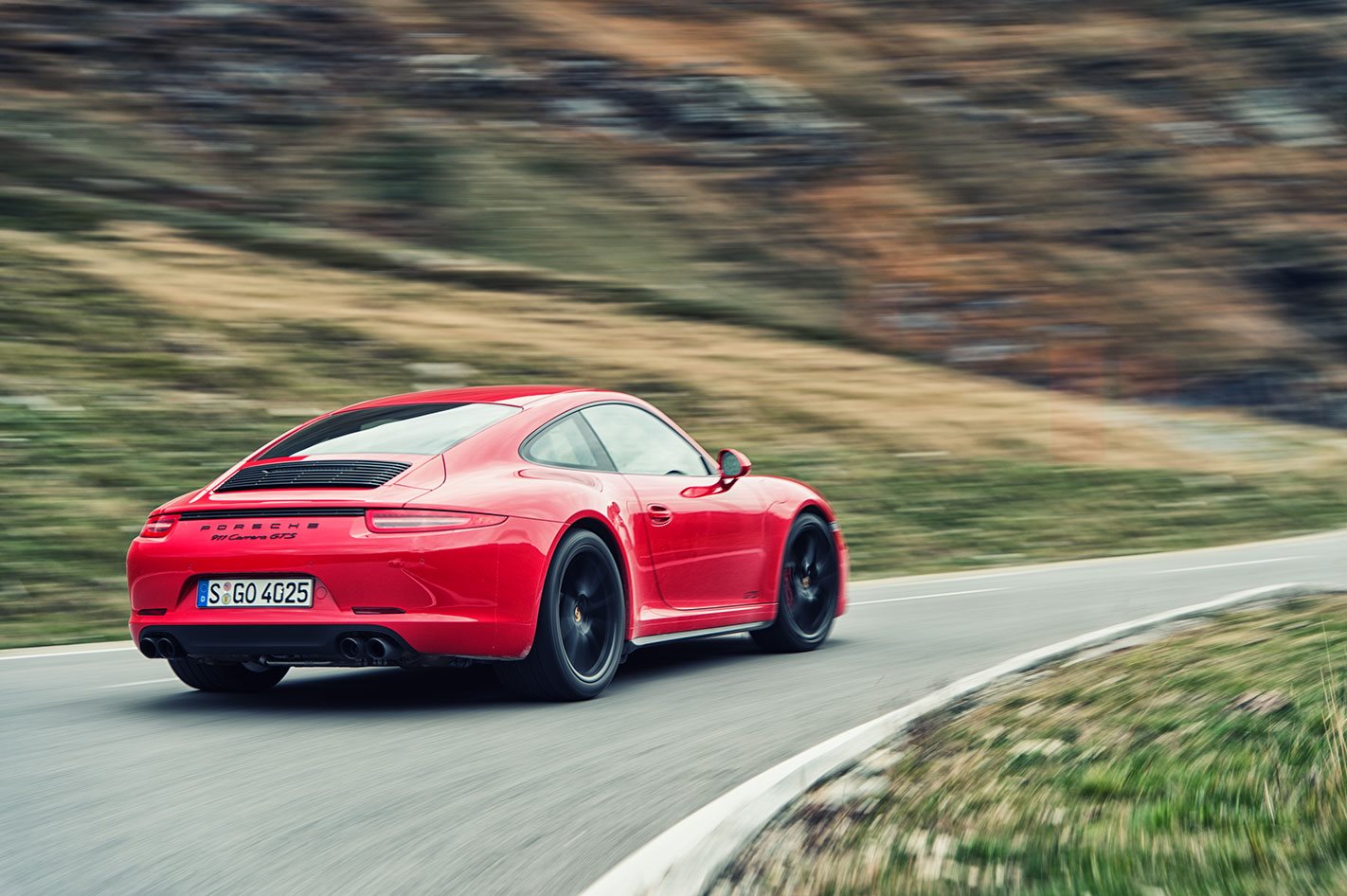 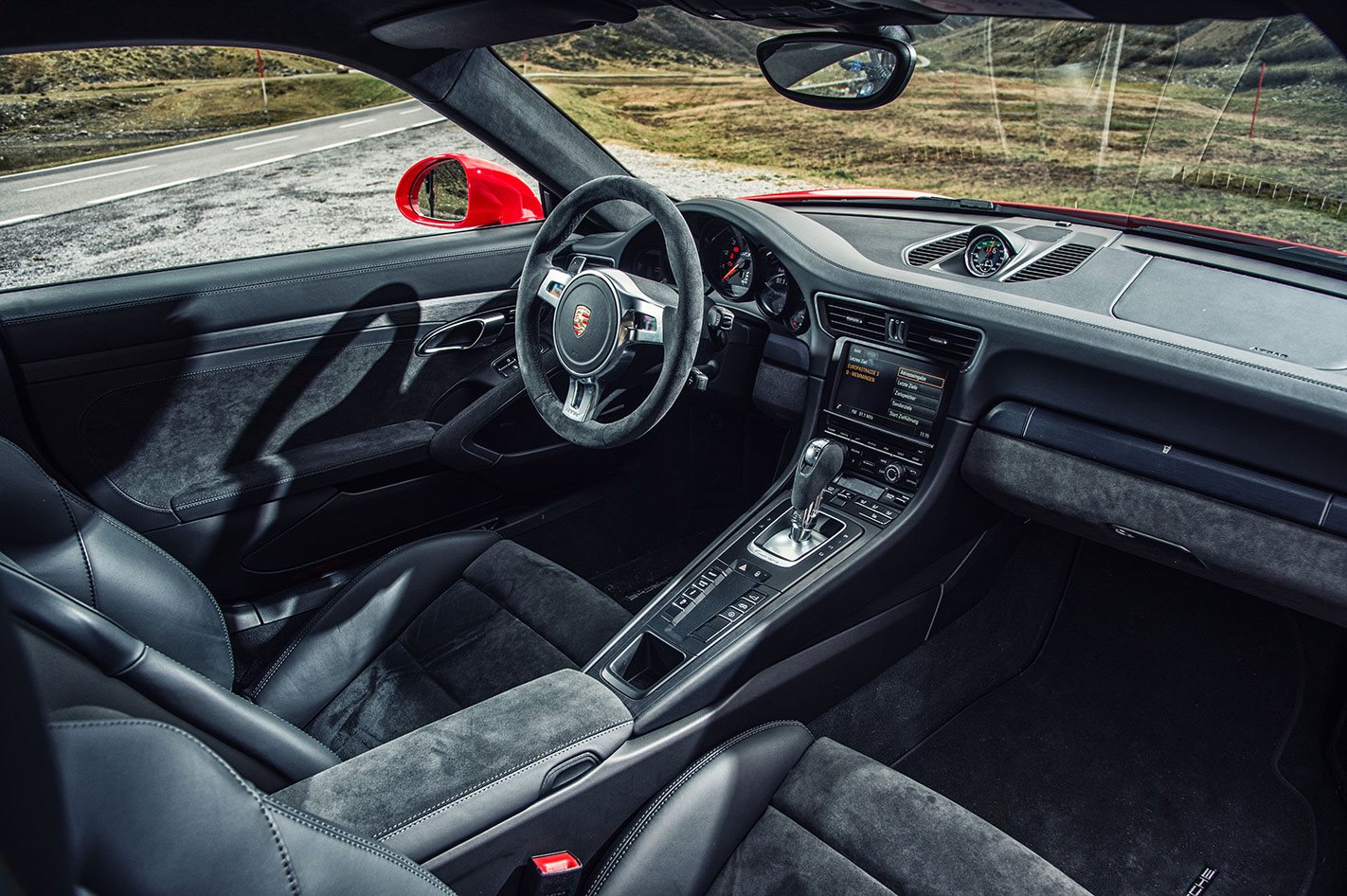 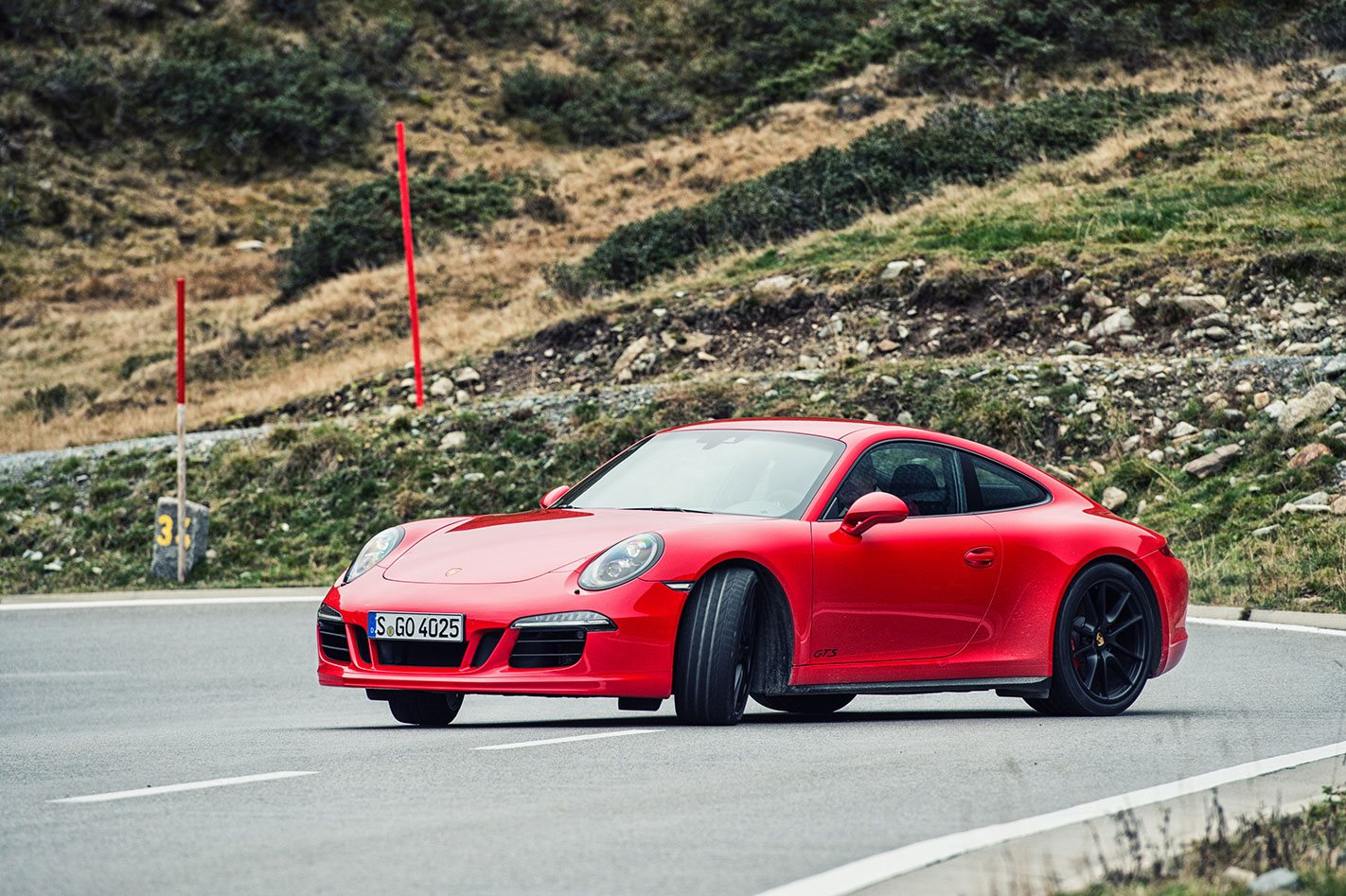 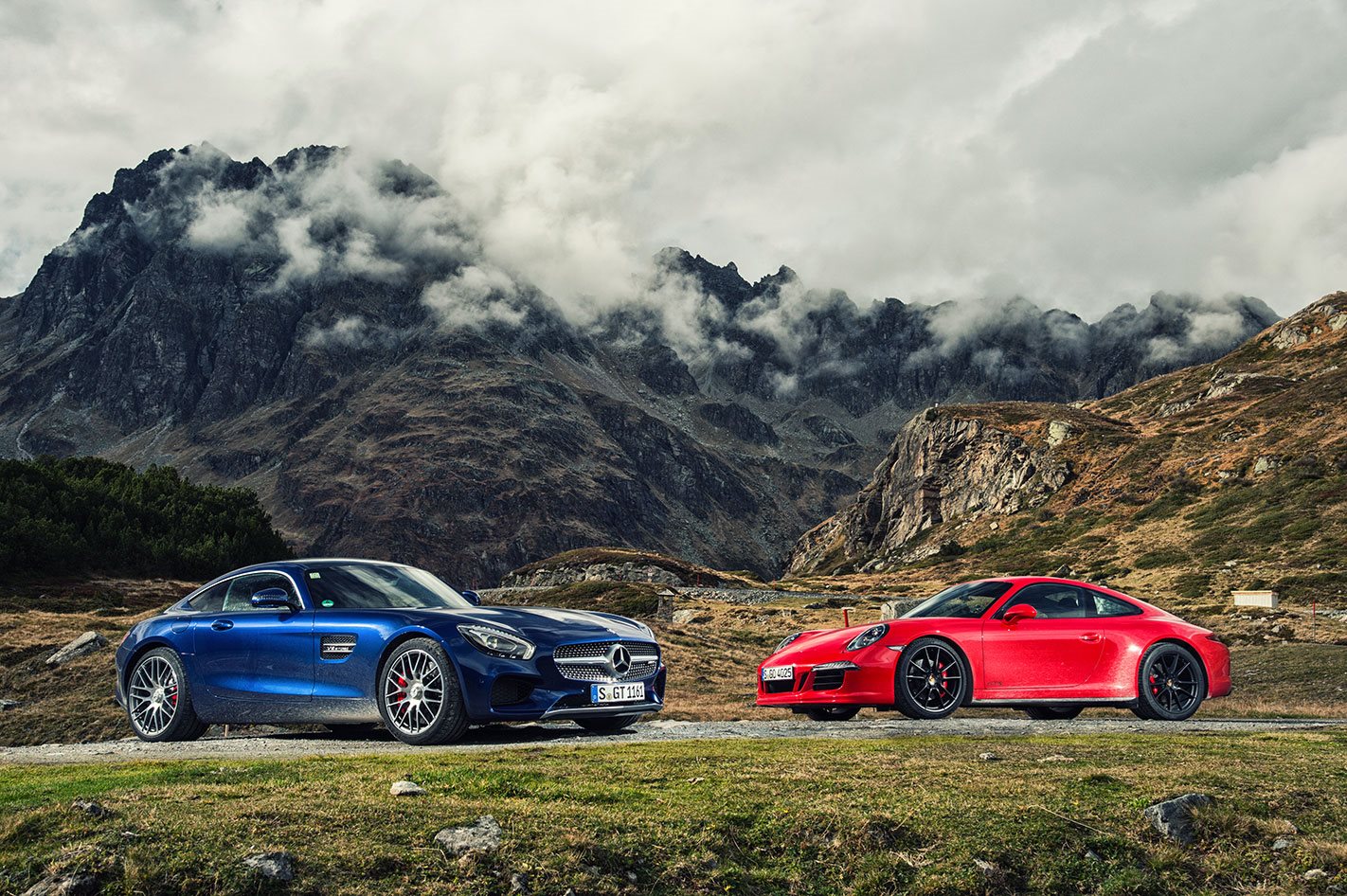