WHAT IS THE PORSCHE CAYENNE COUPE?

It’s time to welcome another swoopy coupe SUV to the ever-expanding crossover segment. You know ‘em - those big hulking family transports with a sportier aesthetic that doesn’t always translate to appreciably better dynamics.

The Cayenne wagon has been a huge success for Porsche and the new coupe should boost the model’s reach to both new and existing customers, the latter projected to make up around 20 percent of all Cayenne sales. Beyond styling, there are some further unique changes to the coupe, so we’re driving the new model around the mountains roads of Austria to find out what it’s all about. 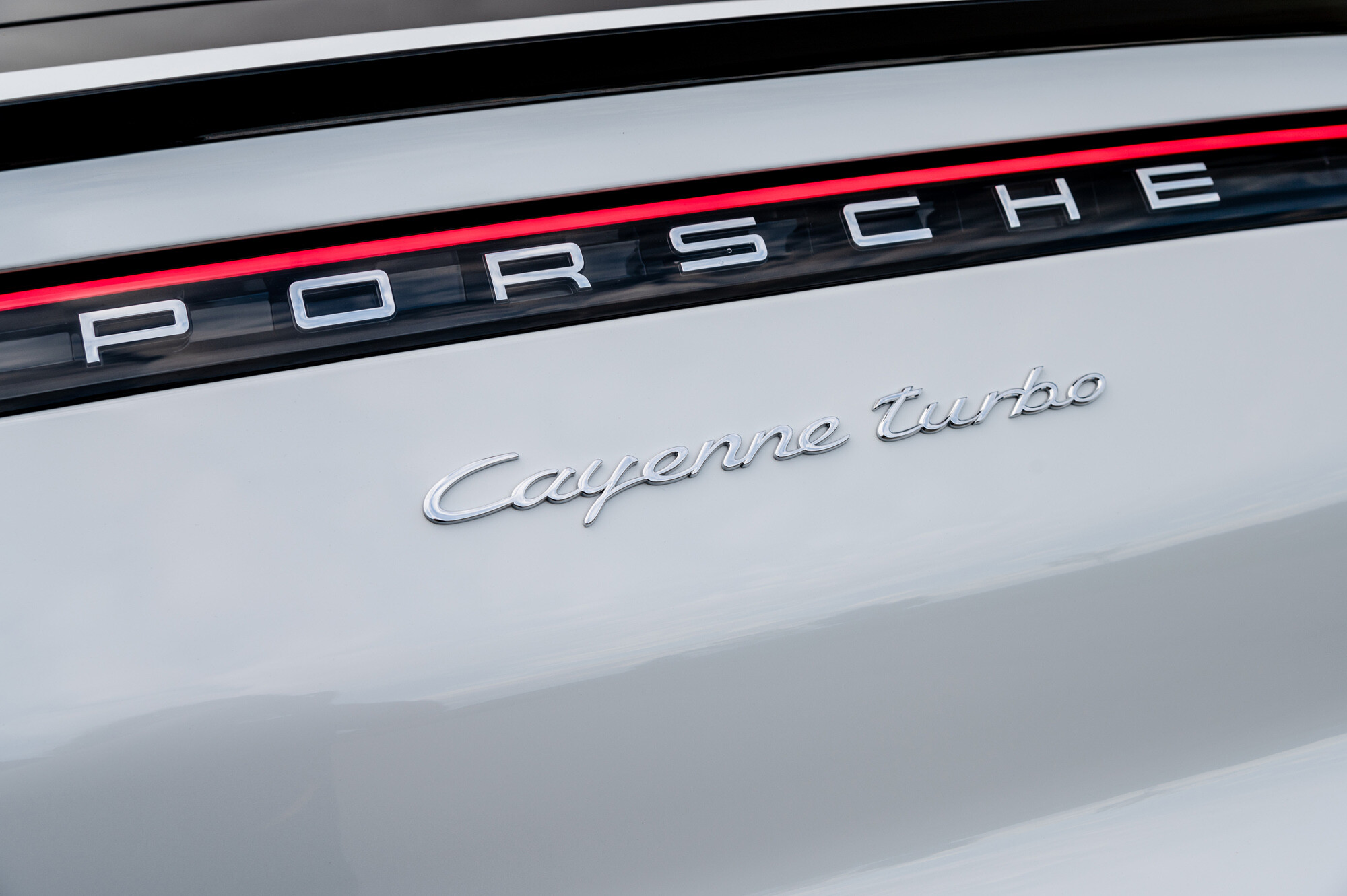 I wasn’t sold on the coupe SUV movement. SUVs are not sports cars. I get that, aesthetically at least, they tickle the fancy of some, but there’s a lot to be said for a car that offers substance over style. Sports cars should go fast and handle superbly; wagons should haul a family and their gear; and four-wheel-drives be built to endure the worst you can throw at them. So an SUV coupe? Nope. It’s hardly the epitome of practical family motoring with mild off-road cred. But when the Porsche Cayenne first landed in 2002 the idea of a Porsche SUV was hardly any less paradoxical, and look how well that’s done.

So I was a bit surprised when I saw the Cayenne Coupe in the metal. It’s what a Porsche SUV should be. Just as the Lamborghini Urus is outrageously undomesticated yet so perfectly aligned with the Raging Bull’s ethos, so too does the Cayenne Coupe meet the expectations of a company better known for building two-door sports cars than anything else. It’s the most Porsche feeling SUV in its stable, and isn’t that the whole reason to fork out big bucks on a car with the golden-flicker Stuttgart badge?

But there are more incongruities for the sensibly minded to get over, like optional sound insulation-delete that removes the stuffing on a premium family vehicle which often has refinement front of mind. Yep, this is SUV by Porsche. 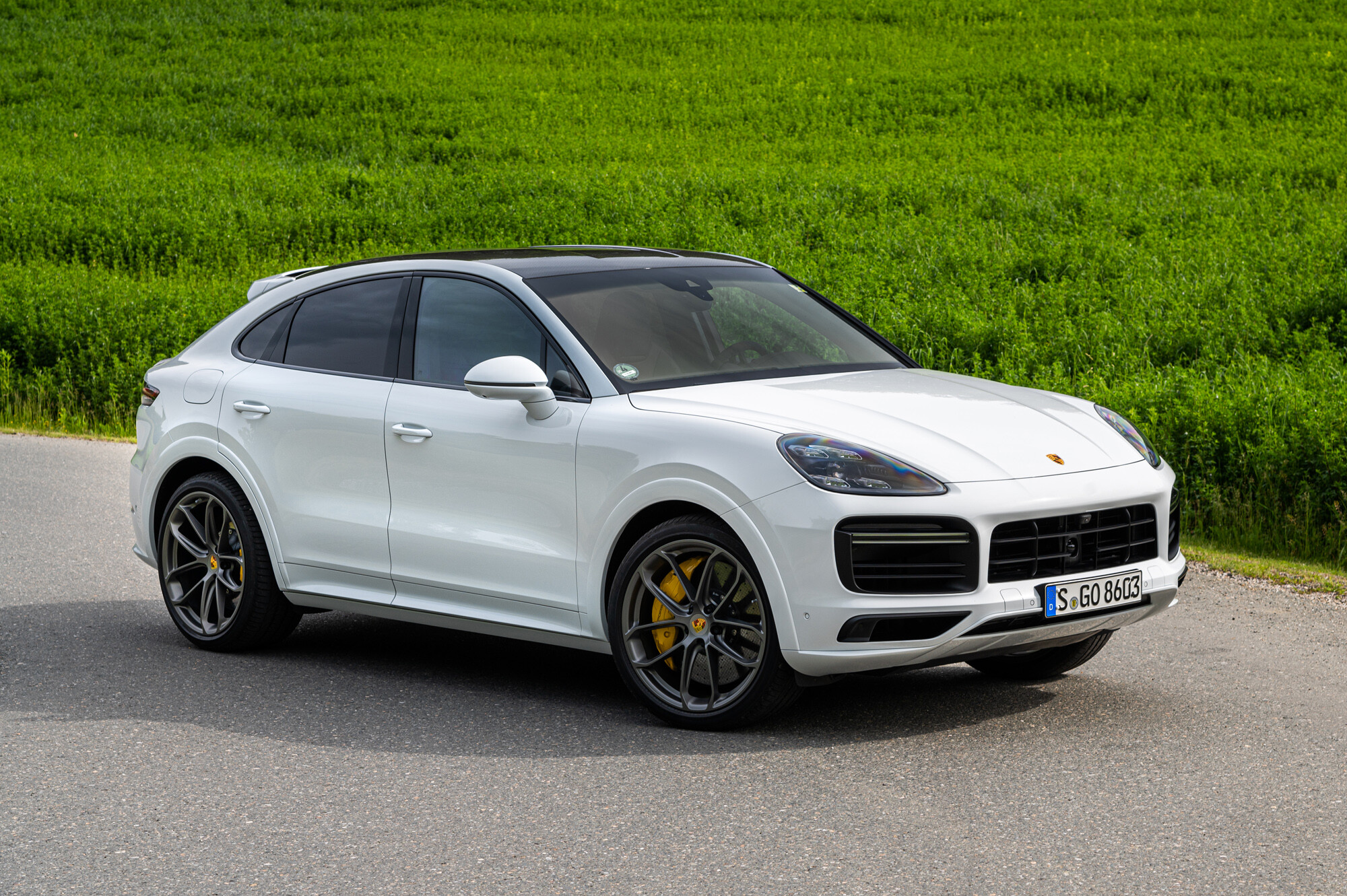 However, it’s not a hulking muscle monster like some other SUV coupes and that goes a long way to making its rear-end styling work. That transformation hinges largely on subtle alterations, like lowering the rear number plate so the haunches appear more slender. It doesn’t look like it’s trying to tuck excess flab into tights.

Despite some visual tricks, the Cayenne Coupe actually measures 18mm wider due to pumped out rear wheel arches, which accommodate a wider wheel track for better lateral stability. Above that, the roof drops 20mm from the regular Cayenne to facilitate the coupe look, and inside the rear seats drop 30mm so there’s a lower centre of gravity and enough headspace for the two (or, optionally, three) rear-seat occupants. If you really want to go all out on performance, an optional carbonfibre roof excises 21kg from the highest section of the car, and in turn opens up headroom for rear-seat occupants (the standard panoramic sunroof is a more than a bit bulky). There’s also a set of lightweight 22-inch alloys on the options list.

The Turbo is not so light on the wallet, priced from $254,000 plus on-road costs and cost-option trinkets. However, the extra standard inclusions in the coupe over the $15k cheaper Cayenne wagon go toward the steeper price, like speed sensitive steering, Sport Chrono pack, and PSM Sport. The base-model, powered by a 250kW/450Nm 3.0-litre V6 turbo is almost half the price of the Turbo at $128,400, but it doesn’t offer the same exhilarating performance of the Turbo or the 324kW/550Nm mid-tier S Coupe ($166,600), though the same weight-saving options are available across all three. 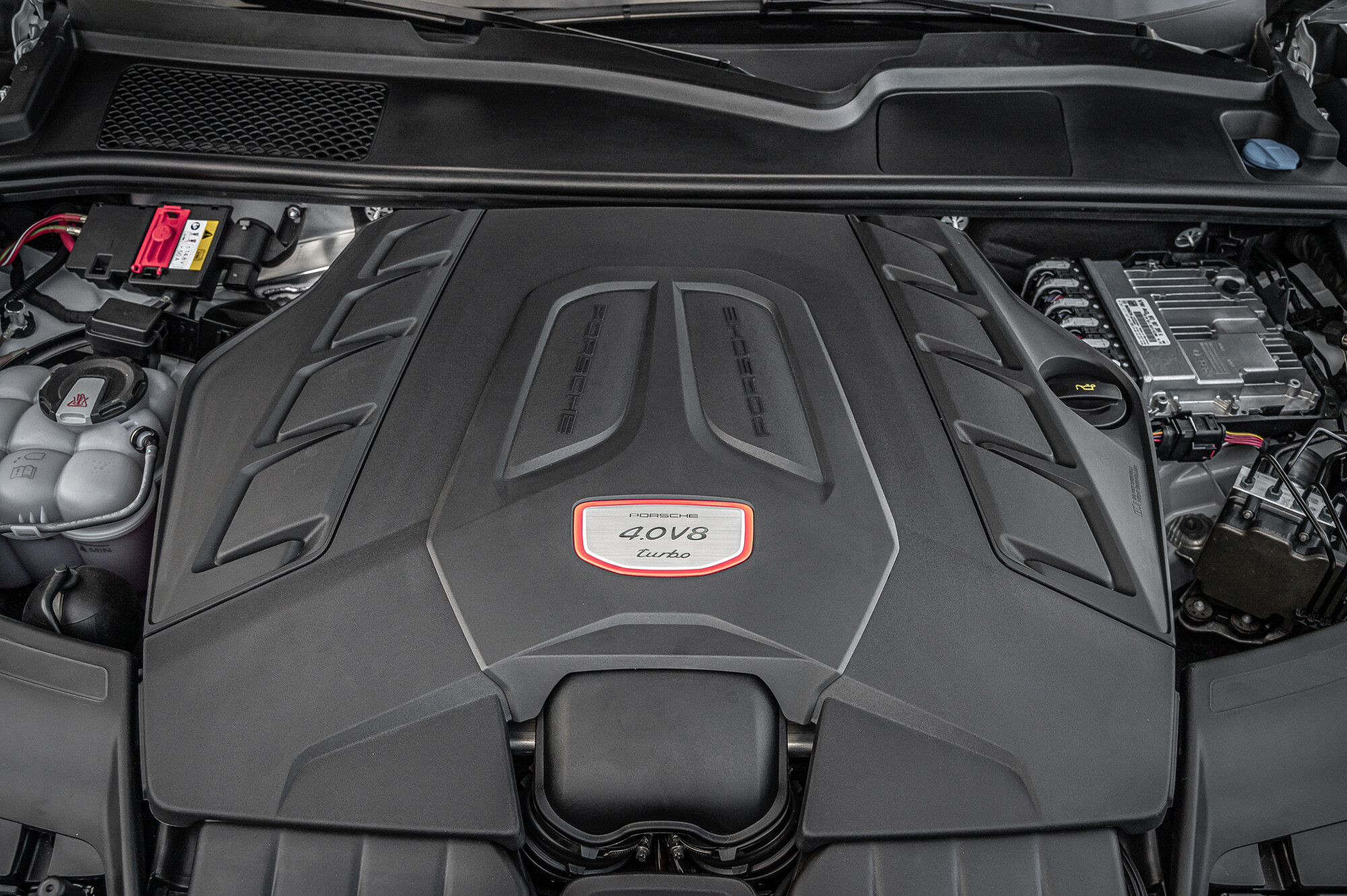 You should be getting the impression by now that there’s a focus on shaving gratuitous material to position the coupe as the higher-achiever in the Cayenne range. Though removing sound insulation from an SUV to help it go even faster around bends might sound like an unnecessary measure, the car does feel undoubtedly agile for such a big unit.

Crank over the V8 mill in the Turbo and the exhaust note purrs. It growls early in the rev range and howls towards redline, though the seat-of-your-pants drama isn’t entirely resolved at the exhaust, missing some of the guttural boisterousness exerted by eight-cylinder rivals such as the Mercedes-AMG GLC 63. Like the normal Cayenne, the twin-turbo 4.0-litre V8 produces 404kW at 5750-6000rpm and 770Nm at 1960-4500rpm. 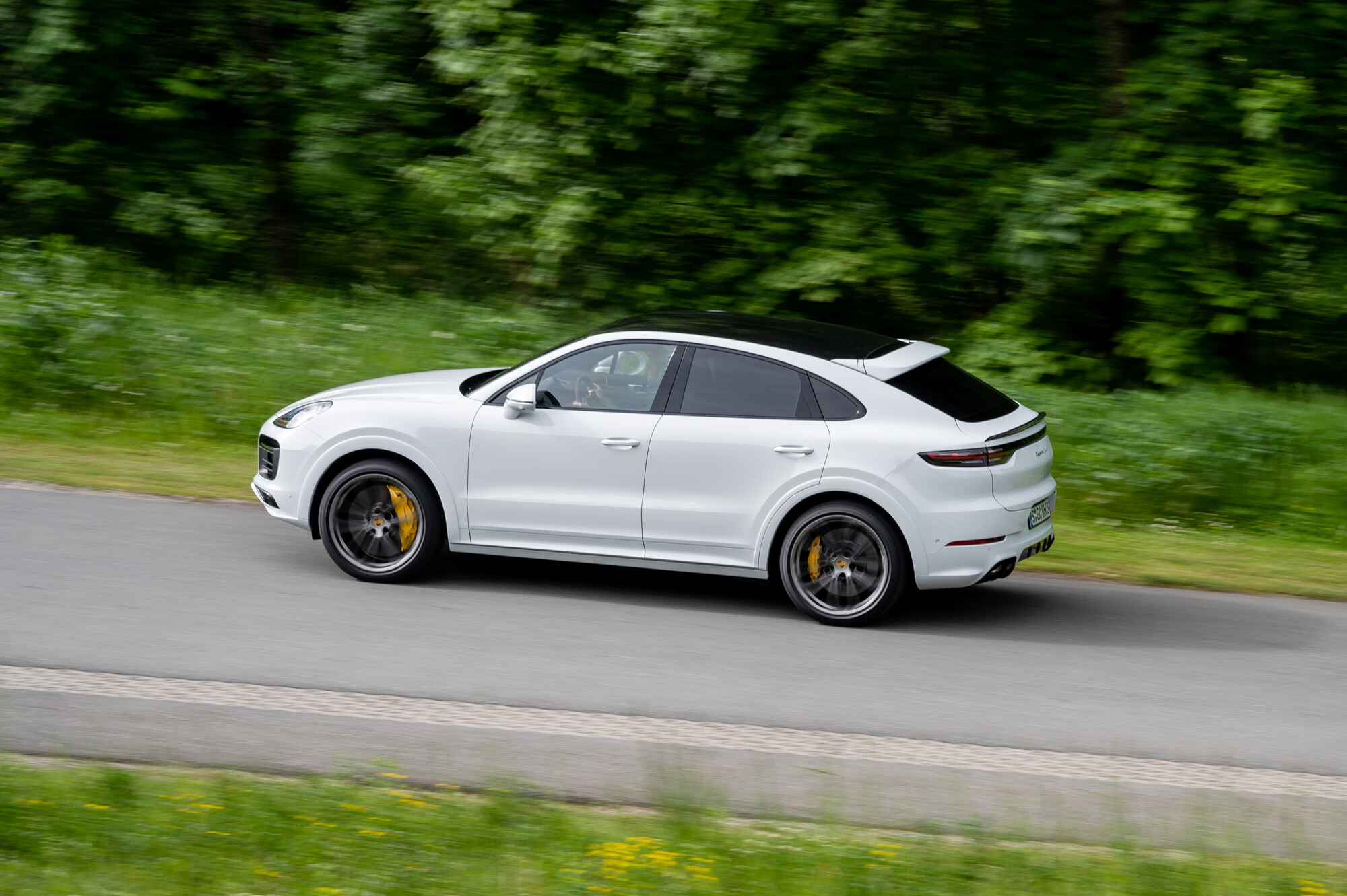 The already quick Cayenne Turbo wagon will sprint from 0-100km/h in 4.1 seconds; the coupe version, which weighs 25kg more (at a portly 2200kg), claims the same time in 3.9s thanks to Sport Chrono fitted as standard on coupe models. And it would have to shave off a tenth or two with the optional lighter parts.

Top speed for the Turbo and S is 286km/h, and aided by the coupe’s unique trio of spoilers. There is the obvious roof-mount wing that’s a styling piece as much as it also aids air flow down over the lower boot lip, which itself sits on a trick active spoiler that extents a tall 135mm from the boot at speeds over 90km/h. Subject to huge aerodynamic forces, the active spoiler was one of the coupe’s most problematic elements to design. 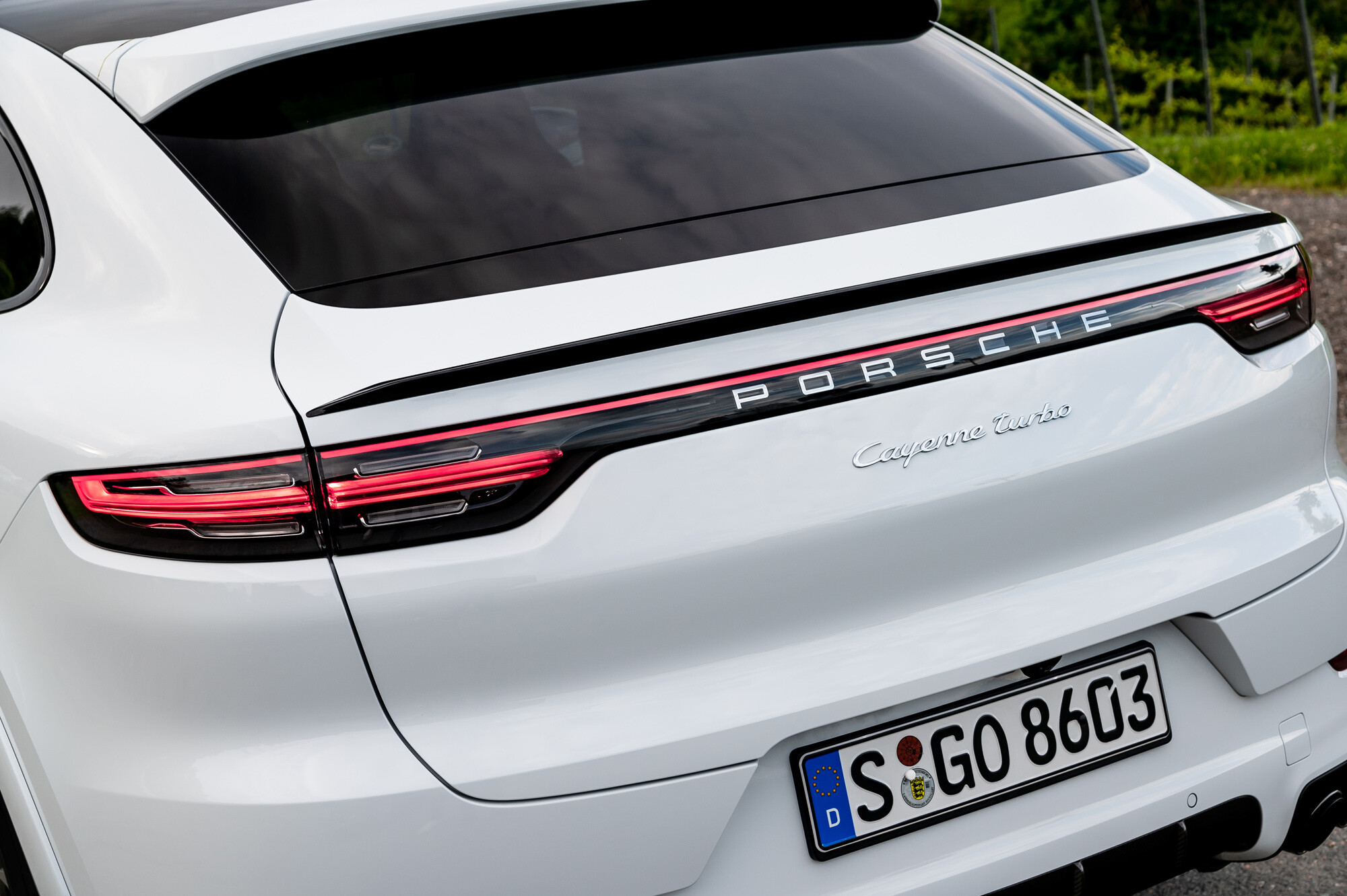 Riding on the same MLB Evo platform found beneath the Cayenne wagon, the coupe is incredibly athletic for an SUV of over two tonnes. The new 48-volt wiring architecture inside allows for incredibly fast computations and response from components like the three-chamber air suspension, traction control, and a more powerful anti-roll system. The result is a flat ride with stonking grip and corner speed. If you were sitting in the passenger seat eyelids shut, you could easily think you were in something much smaller, yet not necessarily more capable. 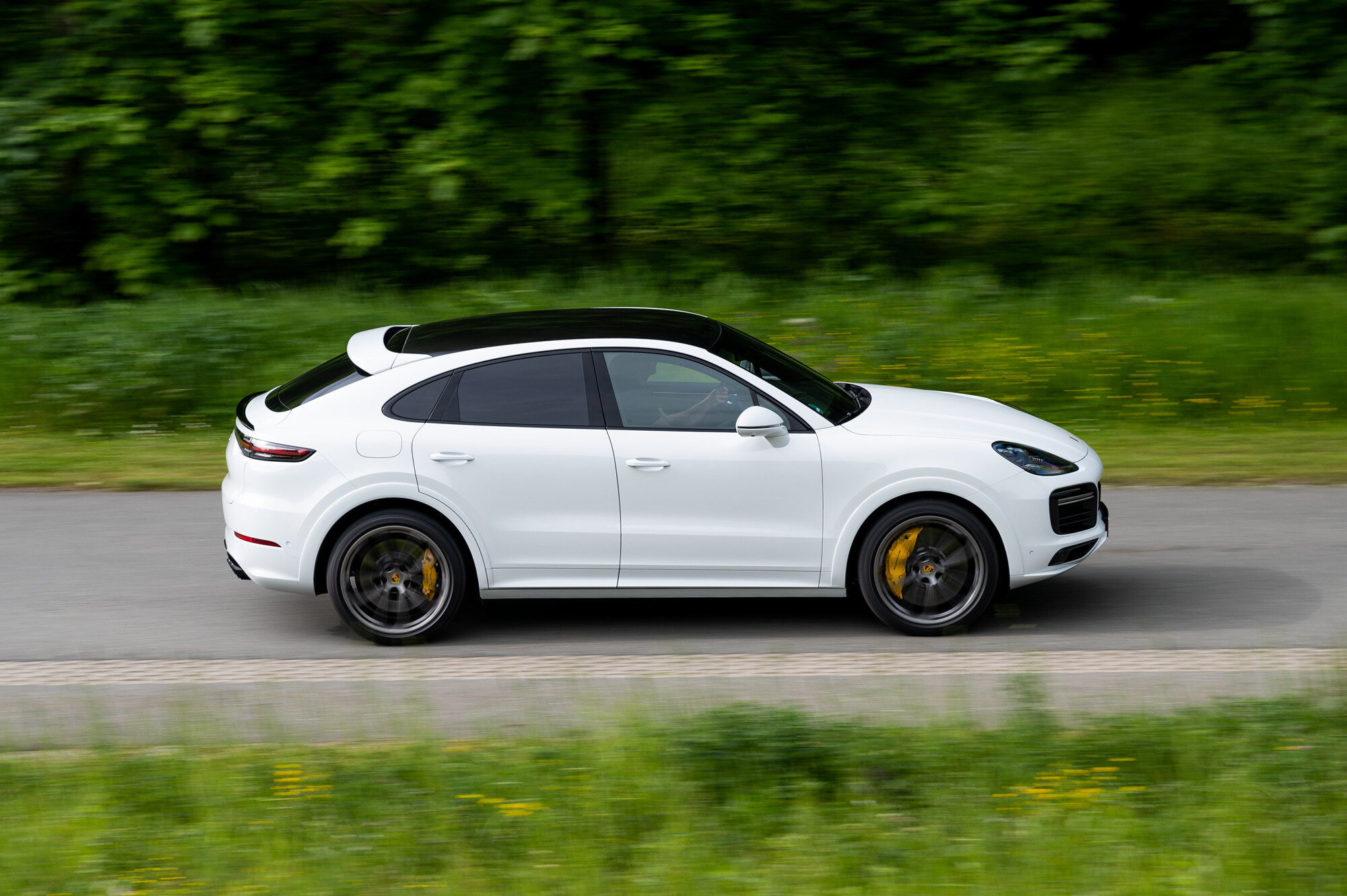 The weakness of the SUV is its weight and loss of communication through the front-end when really digging into corners. Porsche’s PSM Sport traction control system and all-wheel-drive does plenty to save the front-end from washing out, but feedback and feel through the tiller can become a touch numb as the tyres are put under stress.

Ten-piston front, 4-piston rear fixed-caliper brakes go further to defy the normal perception of SUV abilities, gripping with incredible strength on 415mm and 365mm internally-vented discs. We gave the German ship a blast down an Austrian mountain pass and it exhibited no less brake pedal feel and bite at the bottom than when starting atop.

Beyond critical performance faculties, the three-way dampers in their softest setting segue to a softly-sprung ride that soak up bumps and lumps along the road, even on the Turbo’s huge 22-inch alloys. It is easily switched from a highly-responsive sports ship to comfortable cruiser. 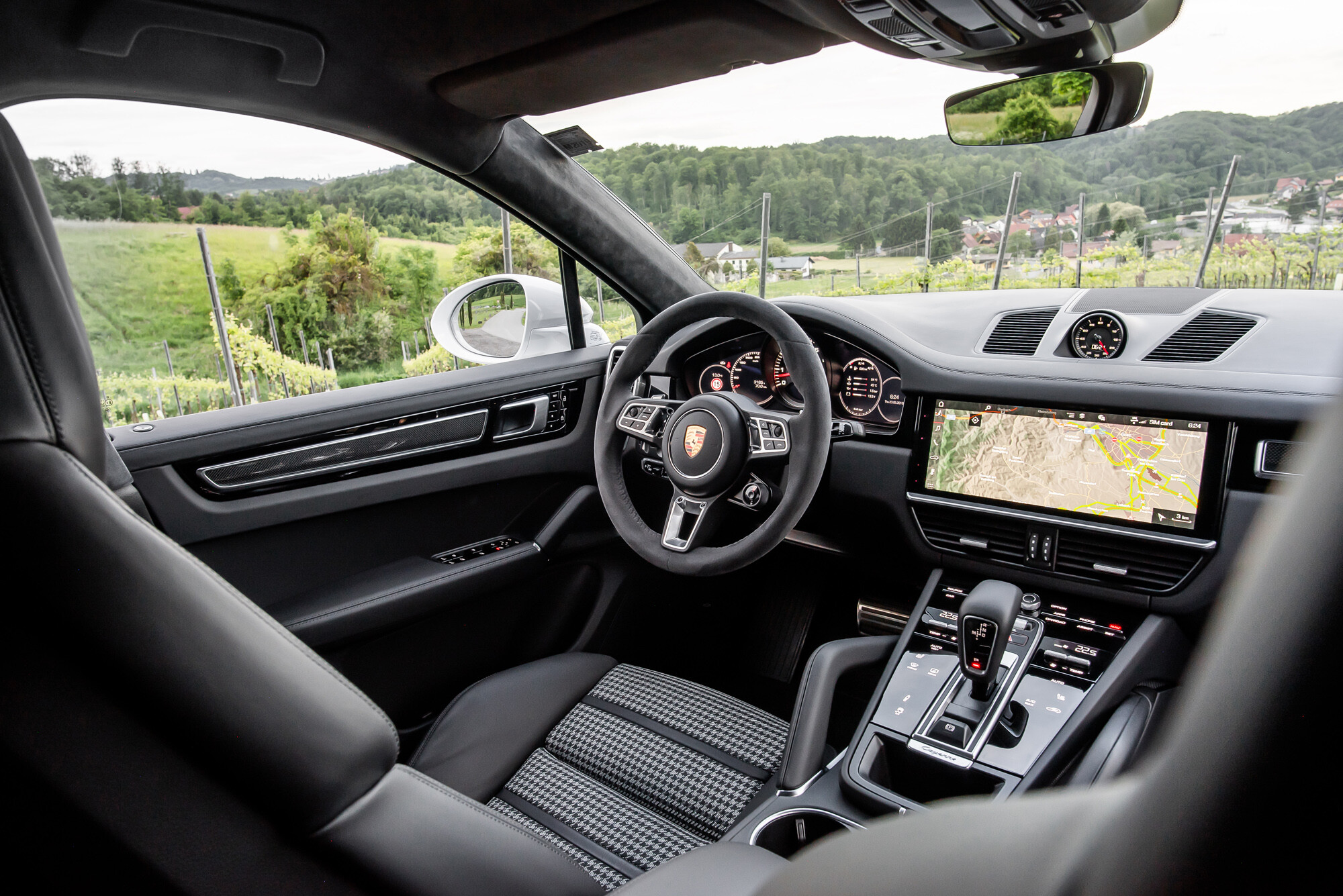 Inside is the same layout of the Cayenne, an expansive dash with a huge 12.3-inch infotainment system and digital driver instrumentation that are bright, crisp, and easy to use. The fabric grey scotch pattern and partial leather seats are classy and the standard two-seat rear setup looks much more sporty than the three pews that can be optioned for no cost. The boot is 145-litres smaller in the coupe, but a relatively large 625L overall. 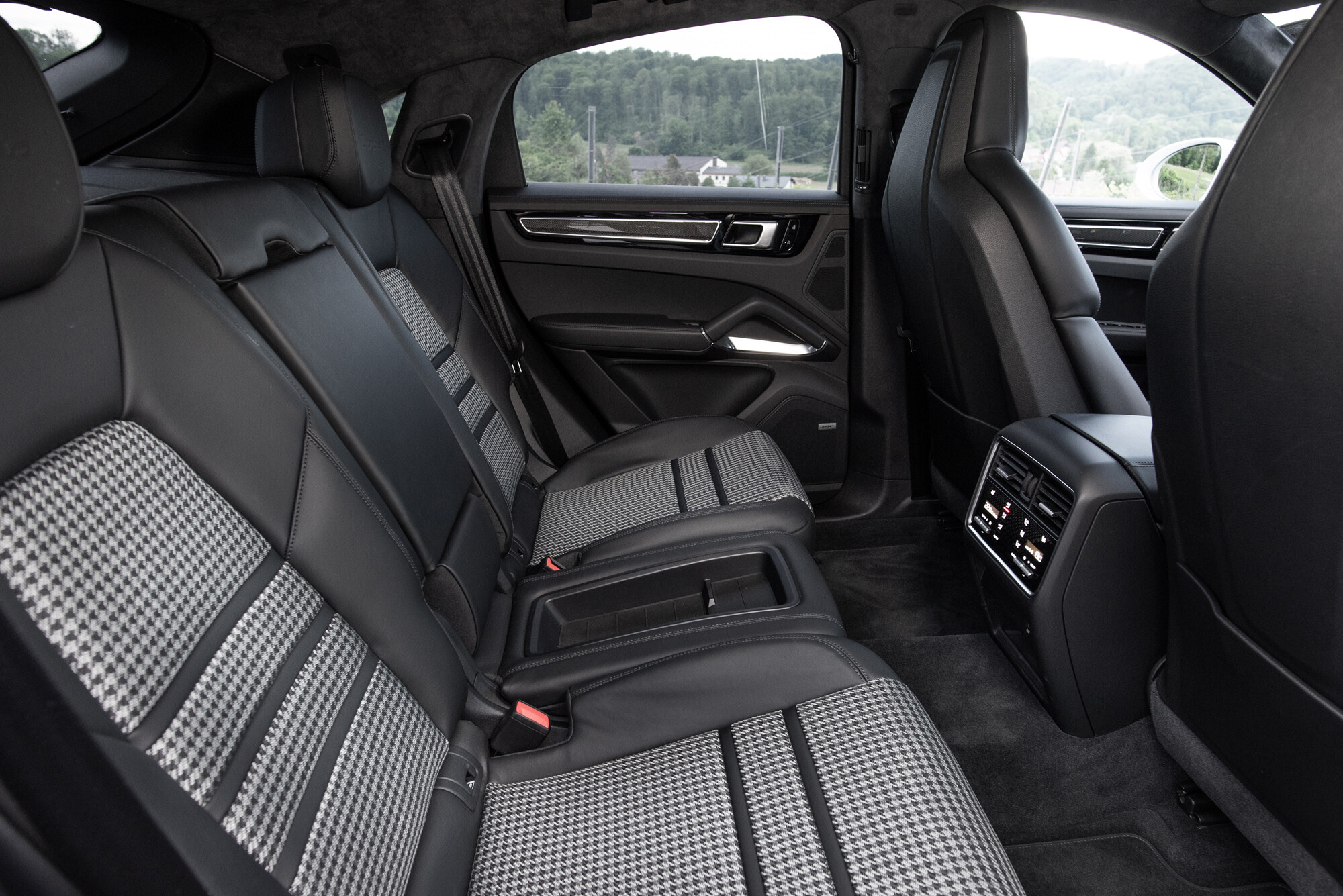 The only real contrast between the coupe and Cayenne inside is space in the back. Headroom shrinks as the roof rakes down over the rear seats, but then the optional carbonfibre roof opens up the cavity overhead; the lighter ceiling certainly does more for opening up the rear space than the standard panoramic roof’s pretense of airiness, and adds to performance.

That’s the crux of the Cayenne Coupe, a performance-focused SUV that has nipped away excess for performance without noticeable sacrifice to comfort. And visually, it’s a better Porsche SUV, and could well claim a larger percentage of the Cayenne’s sales than expected. 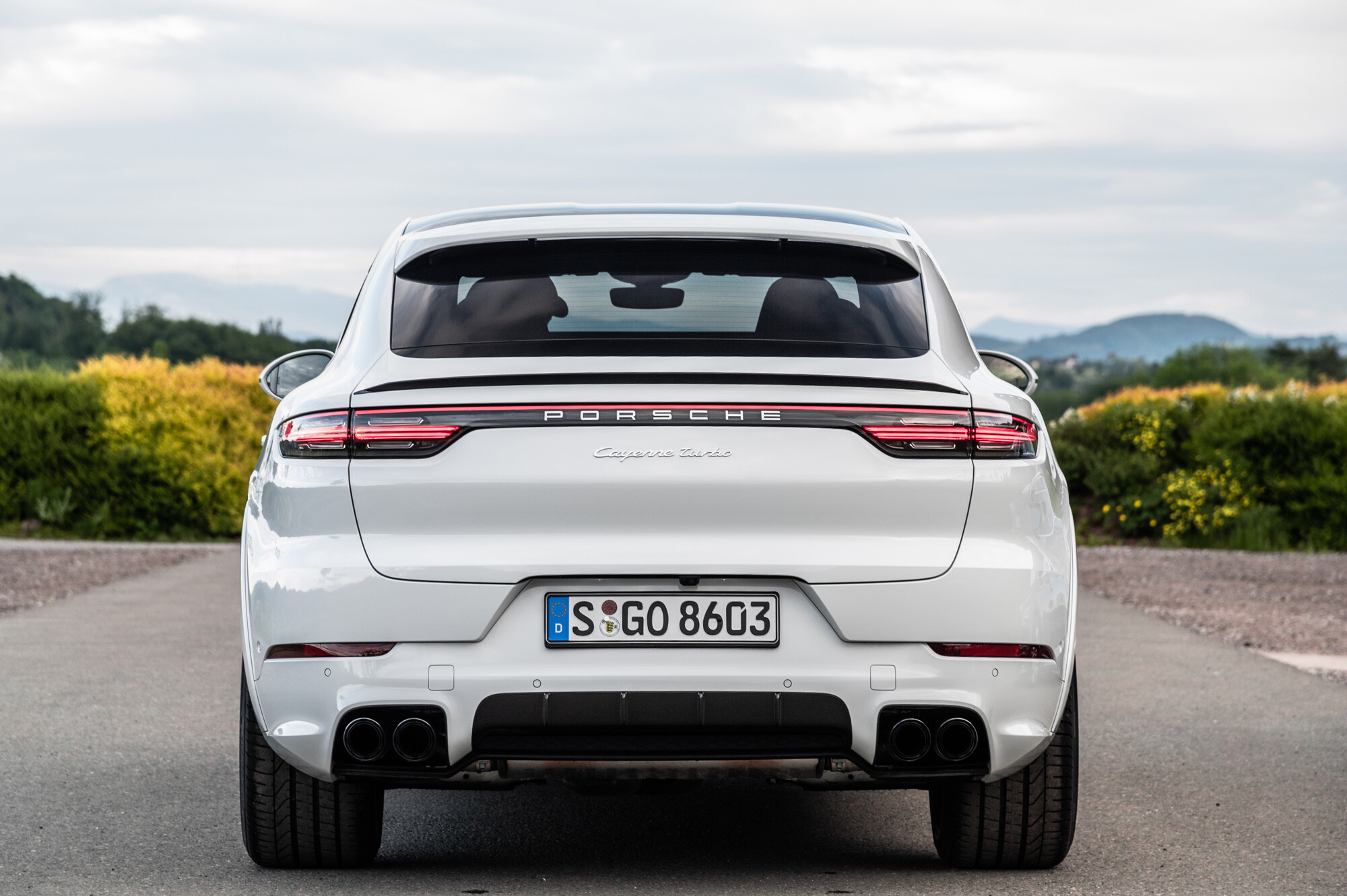