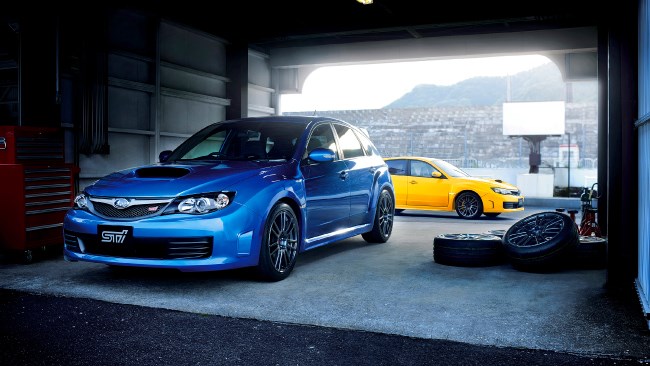 MEET THE latest, stripped-down, toughened-up wild child in Subaru’s Japanese domestic market line-up. For sheer adrenalin- pumping response, speed and grip, this limited-edition Scooby stacks up as the most spectacular of the factory STi offerings ever, a car with the kind of edginess and grin factor third-gen WRX STis have lacked to date.

A cracking drive, then, as you’d expect from a car that’s basically set up for motorsport. Yes, Subaru might be out of the WRC, but it still wants to be in rallying, at production-based Group N level, at least, and to field a semi-race-prepared STi for privateers and club racers.

The Spec C (for ‘competition’) is a limited-edition homologation special. Subaru’s aim is to crank out 900 units by the year’s end, then perhaps another 100 cars for export.

Under the bonnet is the high-revving, Japan-only 2.0-litre twin-scroll turbo engine, massaged with responsive ball-bearing turbo and reprogrammed ECU for a more urgent mid-range, though no extra peak power or torque.

Weight saving measures, which include a new aluminium bonnet, laminar glass for the front and side windows, and a funky set of new 18-inch alloys, trim 30kg from the basic STi’s kerb weight.

The chassis is reworked with a reinforced front crossmember, stiffer springs, harder rear bushings, and a thicker rear anti-roll bar. The rear Torsen LSD is also swapped for a more direct mechanical unit.

Departing from Subaru’s Shinjuku HQ, the Spec C immediately feels firmer and more resilient than the standard STi on the city blacktop, yet isn’t jarringly rigid, like early Rexes.

Slugging it out with Toyota Crown taxis in downtown Tokyo, the Spec C, with its stiff clutch, narrow-gate STi six-speed ’box (no auto available) and gumball tyres that thump over bumps and expansion joints, is far from the most restful car around. The Brembos also need a firm push.

Inside, the Recaro sports seats that come with the 18-inch wheel package are fine for support and look the business. Externally, it’s difficult to pick from a base STi.

It’s not until you’ve put some distance between it and Tokyo’s dazzling neons that the Spec C starts to show a new, exhilarating side. It’s fantastically tight and engaging along narrow, twisty roads, but a lot wilder in fast sweepers where it moves around more on the road and you really need to be at the top of your game to get near the limit. You need a tarmac or forest stage to extract the full potential. Going further and switching the VDC off and/or dialing in some rear-drive bias is best left to hot-shoes.

You still get the same hard-edged, throbby flat-four note as other STis but the way the engine picks up and positively surges from 4000rpm up to the 8000rpm redline is something else. Punch through the gears, second, third, fourth with the Spec C in this zone and it’s suddenly massively (and addictively) fast.

Steering, just 2.5 turns lock-to-lock, is likewise razor sharp and at speed has the firmly sprung, ultra-grippy STi changing direction with just a slight turn of the wheel. It’s great, the only downside being the huge turning circle.

For Subaru fans in Japan, the WRX STi Spec C is the new kid on the block, therefore automatically of interest, helped by the fact it’s virtually line-ball with the normal STi at the equivalent of $46,630.