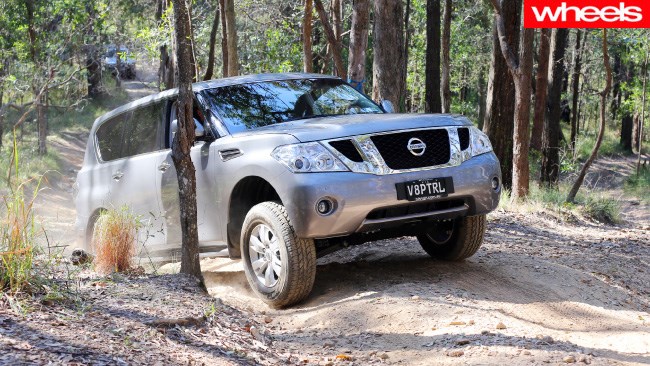 The new Patrol roughly approximates the dimensions of a tank. And that’s fitting because it’s already been attacked – actually, carpet-bombed – on at least three fronts long before it’s even due in Aussie showrooms in January, next year.

The new Patrol roughly approximates the dimensions of a tank. And that’s fitting because it’s already been attacked – actually, carpet-bombed – on at least three fronts long before it’s even due in Aussie showrooms in January, next year:

1. It’s only being offered with
a 5.6-litre petrol engine; there is no diesel variant;
2. It has independent suspension front and rear; no live axle; and,
3. It’s enormous.

The lack of a diesel is a problem for potential buyers because, among other things, the Patrol has traditionally been a popular off-road touring vehicle, so fuel economy has always been a serious consideration. Nissan reckons the Y62’s 140-litre tank and the model’s claimed 14.5L/100km should keep holidaymakers happy.

Independent suspension (in this case double wishbones, front and rear) is regarded by some 4WD traditionalists as too much of a concession to on-road refinement and, as such, Nissan has copped flak for its decision to go for independent suspension rather than the rigid axles of previous Patrols. But the company’s much-touted Hydraulic Body Motion Control (HBMC) is aimed at smoothing the Y62’s on-road ride and giving the model’s off-road cred an added boost, as well as crash-tackling any of those axle-related criticisms while it’s at it.

Size does matter – it’s the biggest SUV around – but with that bulk comes trade-offs. It is 5140mm long, 1995mm wide, and 1940mm high – and pops a vehicular belt buckle at 2829kg, so city driving will present a few challenges. Though the Y62 is, however, peppered with an Around View Monitor and sensors to give the driver at least a fighting chance of getting the Patrol into, through and out of a cityscape without knocking people, cars, or buildings down in the process. Its appeal for bush-touring is also in question as narrow tracks, squeezy rock spots and tricky water-crossings and creek beds will pose a problem.

It’s roomy – the ST-L and Ti models seat eight – and suitably posh for a luxury SUV. New Patrol is “the most luxurious and advanced Nissan ever offered in Australia,” according to its maker, with Landcruiser 200 Series and Land Rover Discovery et al firmly, if a tad unrealistically, in its sights.

On the move, the Patrol comes into its own – for a big bugger, anyway. Off-road, which is where it should be pointed straight away, the Y62 retains much of the classic Patrol prowess but with some new tech tricks.

The new All Mode 4X4 drive system – permanent four-wheel-drive that distributes torque where it’s most needed – offers four modes: Sand, Rock, Snow or On-road driving. There is no Mud mode. You can also push-button your way to 4H or 4L, or activate the rear diff-lock, Hill Descent Control and Hill Start Assist.

The Patrol dominated the moderately difficult off-road obstacles at Mt Cotton driver-training facility, south of Brisbane. It was not even close to being troubled by anything, and all the tech was effective and unobtrusive, although HDC (maintaining 7km/h in 4H, 4km/h in 4L) should be geared lower for safer, steadier steep descents.

When driven back-to-back, the HBMC-equipped Ti offered a more comfortable ride through off-road lumps and bumps than did its base-spec ST-L stablemate.

On a bitumen route – chicanes, switch-backs, tight corners etc – it was soon obvious that when push comes to shove, new Patrol is able to punch its way through twisty stuff without getting out of order. Through some corners, however, the Patrol’s combination of barn-sized bulk and over-protective tech resulted in an annoying drop-off in power under throttle.

The seven-speed auto ’box, with manual mode, is matched nicely to the donk. Again, the Ti with HBMC yielded a more driver- and passenger-friendly ride than the ST-L; tech proving its worth in a real-world sense. 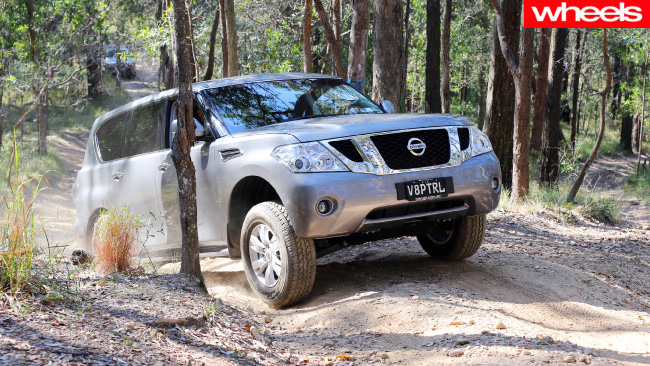 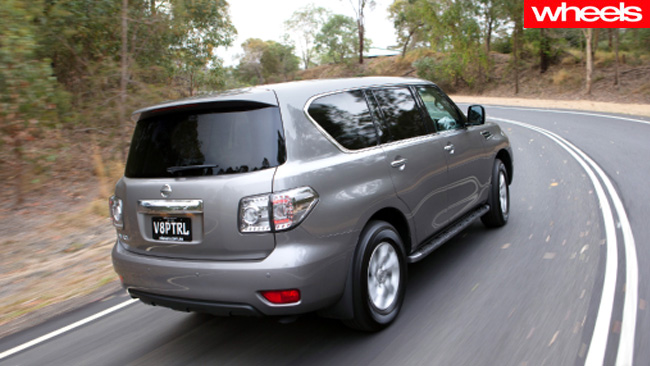 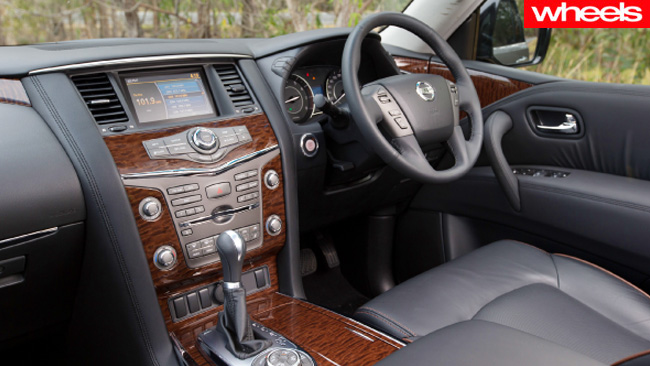