Audi RS3 to get powerful five-cylinder engine, as revealed at the 2016 Paris Motor Show.

The Audi RS3 sedan has been revealed in Paris, featuring an even more powerful version of Audi’s 2.5-litre turbocharged five-cylinder engine.

The RS3 Sedan’s 2.5 TFSI aluminium engine, which is shared with the Audi TT RS in this tune, produces 294kW of power and 480Nm of torque to push it from 0-100km/h in just 4.1 seconds. By comparison, the same engine in the five-door version, the RS3 Sportback hatch, produces 270kW and 465Nm and, despite being less powerful, sprints from 0-100km/h in exactly the same time. 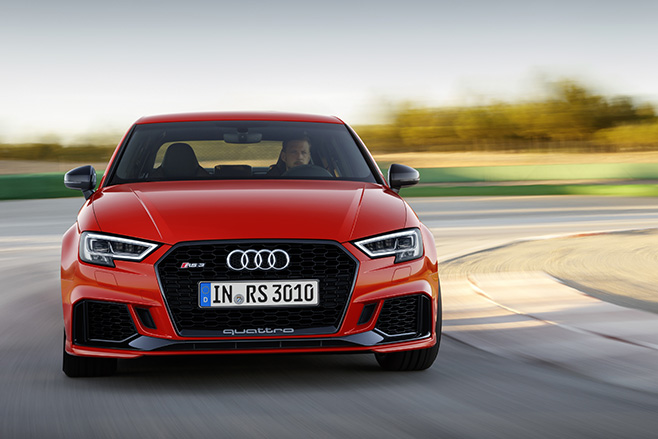 The engine, which is mated to a seven-speed dual-clutch transmission and sends power to all four wheels, can be tuned by Audi Drive Select system’s modes: comfort, auto and dynamic. Drivers also have the choice of controlling the suspension on the optional RS “sport suspension plus” with adaptive damper control.

Sport mode in the RS’s specially tuned ESC can be used for controlled driving, or it can be deactivated. 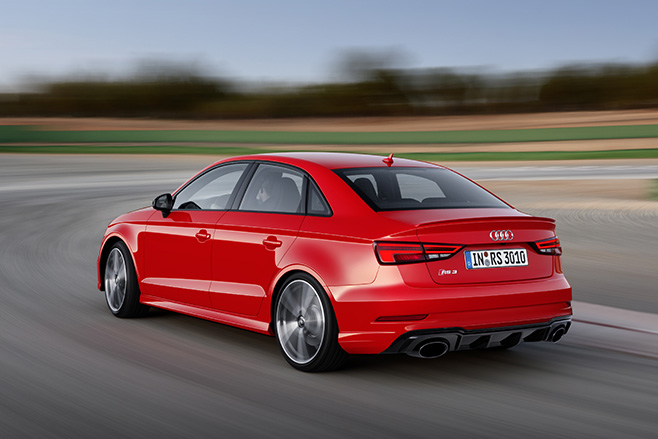 Cosmetically, the RS gets a slight makeover to its front and rear fascia. Measuring 20mm wider than the A3 with the rear wheels 14mm further apart, the RS 3 Sedan features flared wheel arches, while a fixed lip spoiler garnishes the boot lid.

Inside, the illuminated door sills sport RS3 logos. Nappa leather sport seats come as standard, as are the 19-inch wheels. 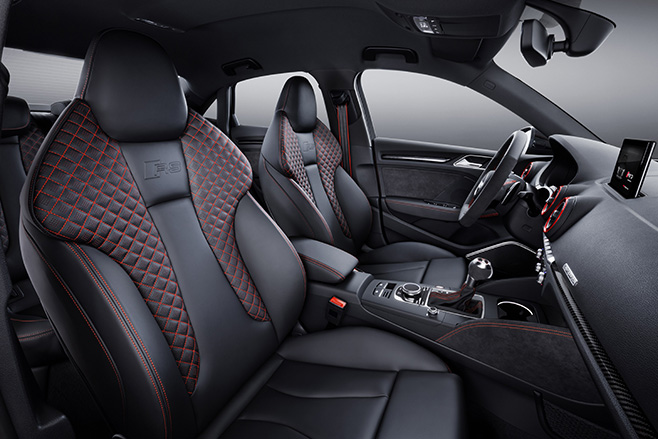 A seven-inch electrically extending infotainment system sits in the centre of the dash and includes satellite navigation. Analogue instruments are used for the driver’s dash, while an optional fully digital cockpit is available. Other options include Qi smartphone charging, and a Bang & Olufsen 14-speaker sound system.

In terms of safety, the RS 3 comes with driver assistance systems such as collision warning, blind-spot monitoring and traffic sign detection, while new technologies include semi-autonomous traffic jam assist that works at speeds of up to 60km/h, autonomous emergency braking and cross traffic assistance.

The Audi RS3 Sedan is due to go on sale overseas in 2017, but we’re yet to get word on an Australian sales date.