BMW is keeping things simple for its latest 2 Series update, with the so-called Life Cycle Impulse (LCI) limited to interior and exterior aesthetic changes and a light tech boost.

When the refreshed range of small sports coupes and convertibles arrives in September this year it will be the second update the German carmaker has treated its 2 Series line-up to, since the model was introduced in February 2014.

A major reshuffle of variants and offerings will not be rolled out with the latest revision as confirmed by BMW Group Australia product communications manager Adam Davis.

“Expect carry-over model variants with the same engines,” he said. “It’s an aesthetics and technology update and will mirror the existing variant spread.”

The current line-up extends from the entry-level 220i priced from $51,300 before on-road costs or $58,300 if you opt for the convertible version, through 230i coupe and cabriolet, to the sub-M range-topping M240i which is also available in drop-top or tin-top versions.

Performance enthusiasts will also delight that the LCI will be applied to the hugely popular M2, which will arrive at the same time as the rest of the range, as well as the stripped-down M2 Pure – the purist’s version formulated for Australia. 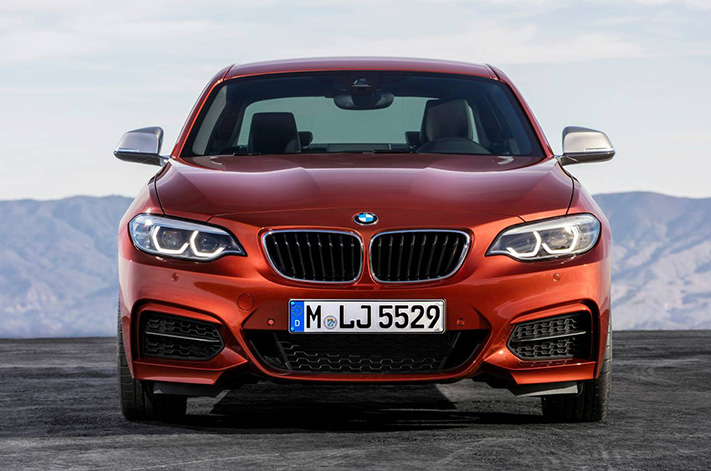 “That’ll include M2 as well,” said Davis. “We’ll do our Pure local edition again with manual only and your full-fat DCT-equipped but no-cost option manual M2 as well.”

Europeans are treated to a far more diverse 2 Series range with nine coupe variants on offer and eight convertible options including diesels and all-wheel drive xDrive transmissions, but Davis said no such additions would be making it down under. The lone 220d was dropped last year.

On the outside, the 2 Series LCI has a redesigned nose headlined by bi-LED headlights (adaptive versions are optional), wider signature kidney grille, air vents and fog-lights dependent on the variant specification, while a new all-LED taillight design provides a fresh look for the rear.

Four new alloy wheel designs from 16-inch to 18 inches have been added to the options catalogue for customers wanting to add a more personalised look, as have three new paint tones; Mediterranean Blue, Seaside Blue and Sunset Orange.

On the inside, a range of new fabrics and design themes give the 2 Series cabin “a more spacious, calmer and clearer feel” says BMW, complemented by a new instrument cluster design.

A new 8.8-inch dash-mounted touchscreen forms the centrepiece of the update, allowing occupants to access the iDrive information and entertainment options via a more intuitive operating system, which adopts swipe-style tiles similar to a smartphone.

Pricing has not yet been finalised for Australian customers but is not expected to deviate greatly from the current structure, given the relatively subtle changes.

In the sports cars under $80,000 segment, BMW’s 2 Series continues to attract consistent sales and 211 registrations to the end of April this year. It falls behind the runaway success Ford Mustang (639) but still holds strong in second place ahead of the Hyundai Veloster (180), and Toyota 86 with 145 of the affordable two-seaters finding homes since the start of the year.