He told WhichCar the single-frame 'grille'– now in a body colour because there’s no need for large air intake – sits behind a new interpretation of the honeycomb design with something three dimensional.

He also points out the wind-tunnel-honed air curtains.

“This is very effective and we thought maybe it could become a design principle, so we are stressing these two air curtains. And these are details you will see in future RS [and EV] models. The air curtains and body painted single frame.” Built alongside the revered Audi R8 in Bollinger Hofe, Germany, the E-Tron GT also boasts a lower centre of gravity than its supercar stablemate.

Of course, being an electric car, this is easier to achieve, given the electric-only platform places the heaviest component – the battery – low down in the car.

Audi’s keen to point out that it can fit full-size adults comfortably in the rear seats, thanks to a cut-out area in the battery cell so rear occupants can place their feet under the front seats. These are called a “foot garage” and maximise space. 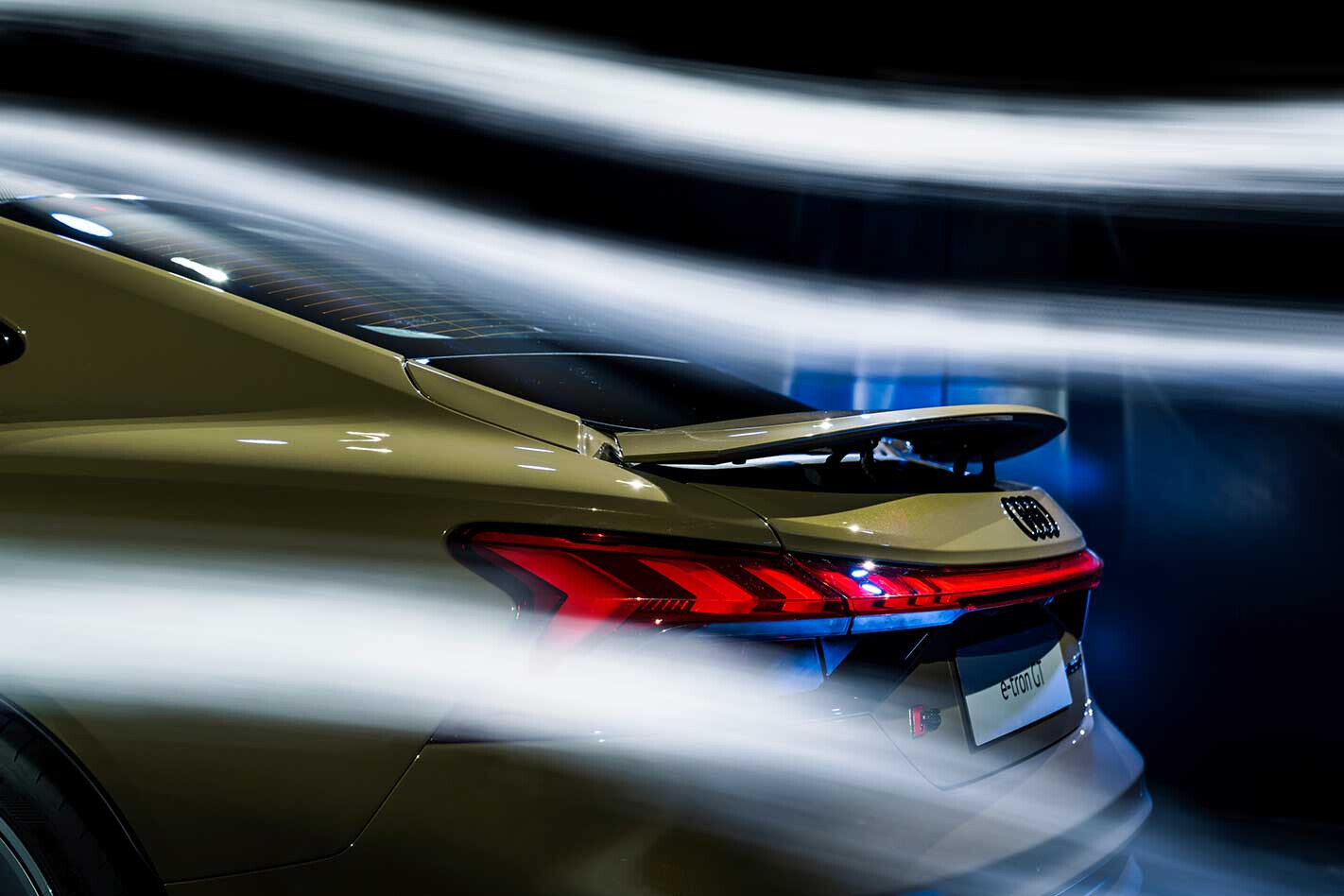 If you’ve read our comprehensive rundown on the official E-Tron GT specifications, you’ll know the duo manage over 400km of range from a single charge. But the reason the more powerful RS can crack that figure comes down to smart active aero.

Inlet louvres each side of the front bumper open when the car’s clever cooling circuit, hooked up to the electrical components, needs to bathe its radiators in air.

These combine with a completely flat underbody that extends to cover the rear axle openings under the rear suspension arms.

As well as an active rear spoiler, the adaptive air suspension on the RS model lowers the car as much as 22mm at high speed for aerodynamic and stability gains, and all up this boosts range by about 30km.

Curiously, the E-Tron GT features full-sized mirrors, rather than the sleek virtual mirrors found on the E-Tron SUV, due to electrical constraints of the platform. 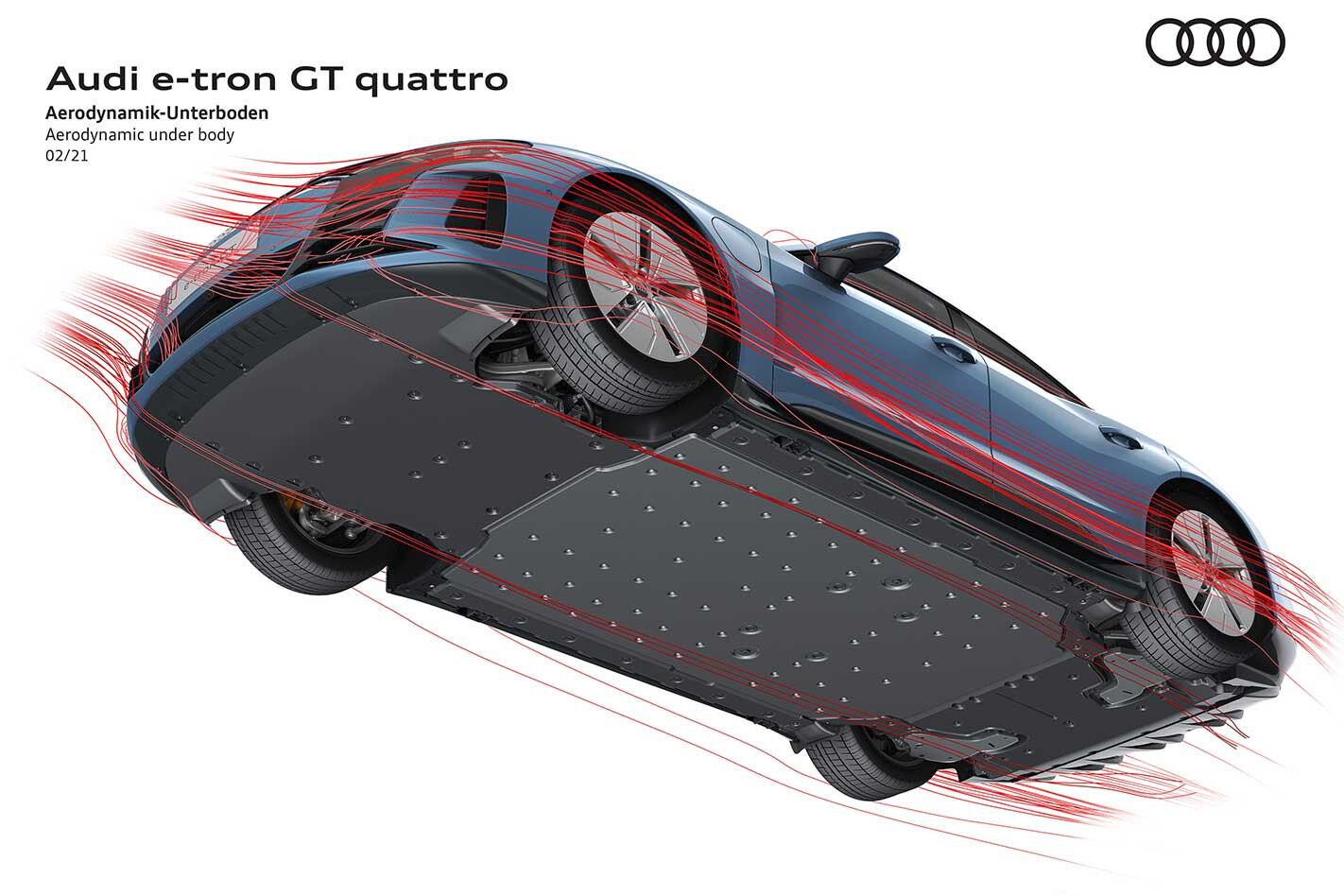 The 250km/h claimed top speed for the RS E-Tron GT seems fairly low for one of the most powerful cars Audi makes.

But we’re told this was done to preserve range. At around 100km/h, the main source of mechanical resistance is aerodynamic drag. Given drag multiplies exponentially as speed rises, Audi’s aerodynamic engineers say the battery would drain after a couple of minutes at top speed.

Further to this, in Performance mode, Audi’s aero engineers say the car produces neither downforce nor lift. Both E-Tron GT versions can wind up battery power to deliver a higher combined power output for serious acceleration, as we've touched on here, but this overboost function won’t last for long.

First of all, it’s only enabled during launch control, and then will hang around for 2.5 seconds.

“The release of the additional power is controlled by software,” as Audi explains, “the main reason why we are not providing the full power all the time is to protect the components (durability) and to ensure a proper temperature control in the pulse inverters as well as the battery (pack).”

Bonus: E-Tron GTs feature charging sockets on both sides, positioned at the front wings. However, only the right side is DC charging capable.

NEXT We virtually compare the Lucid Air with Tesla's Model S