Still available across four trim levels (S, S Premium, Si and SLi) and as either a five-door hatch or four-door sedan, the biggest mechanical change is to the Cerato’s engine range, with Kia ditching the old car’s 1.8-litre petrol engine.

Every model in the Cerato range is paired with a six-speed automatic, with only the base S available with the choice of a six-speed manual.

Visually, the most obvious differences for this mid-life update are a more aggressive front bumper that houses a larger Tiger Nose grille, sleeker wrap-around headlights and a deeper front air intake with integrated fog lamps.

Inside, Kia has changed the materials on the doors, dash and seats, and also made small alterations to the centre console and gearstick. 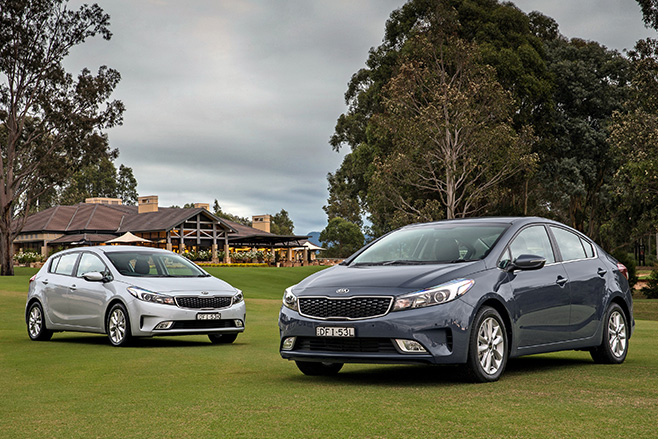 Other technical improvements include an updated 7-inch touch screen with sat-nav and reversing camera on S Premium models and above.

Base S models make do with a dated-looking 3.5-inch LCD centre screen, though customers can upgrade to the 7-inch head unit, which is compatible with Android Auto, for $500.

The steering is improved over the existing car too, thanks to an upgraded system that improves the driver’s sense of connection to the front wheels.

Kia is offering sharp drive-away pricing on all Cerato models from launch, plus the option of a free automatic upgrade on the entry-level S model, which Kia expects to be the top selling variant.