The Kia Cerato hatch and sedan have stylish cabins, strong infotainment suite, and drive nicely, with all versions featuring some kind of autonomous emergency braking and seven-year warranty. The range is topped by a fun-driving GT version powered by a punchy 1.6-litre turbocharged engine.

Wishing Kia had installed a not-so sluggish engine in the non-GT versions than simply carrying over the old 2.0-litre powerplant from the previous model. The new model is 19kg heavier than its predecessor, resulting in reduced performance and fuel economy; up from 7.2 litres/100km to 7.4 litres/100km.

Feeling fatigued after long drives in a Cerato GT thanks to the hard suspension tune that makes it great for handling but a harsh over less than perfect roads such as country highways.

The Cerato drives the front wheels, and are classed as a small car, lower priced.

What features do all Cerato versions have?

The Cerato has a seven-year, unlimited-kilometre warranty.

The 1.6-litre turbocharged engine in the Cerato GT hatch and sedan has an official economy rating of 6.8 litres/100km (city and country combined) through its seven-speed dual-clutch automatic gearbox. Our real-world testing has seen that figure rise to about 8.4 litres/100km. 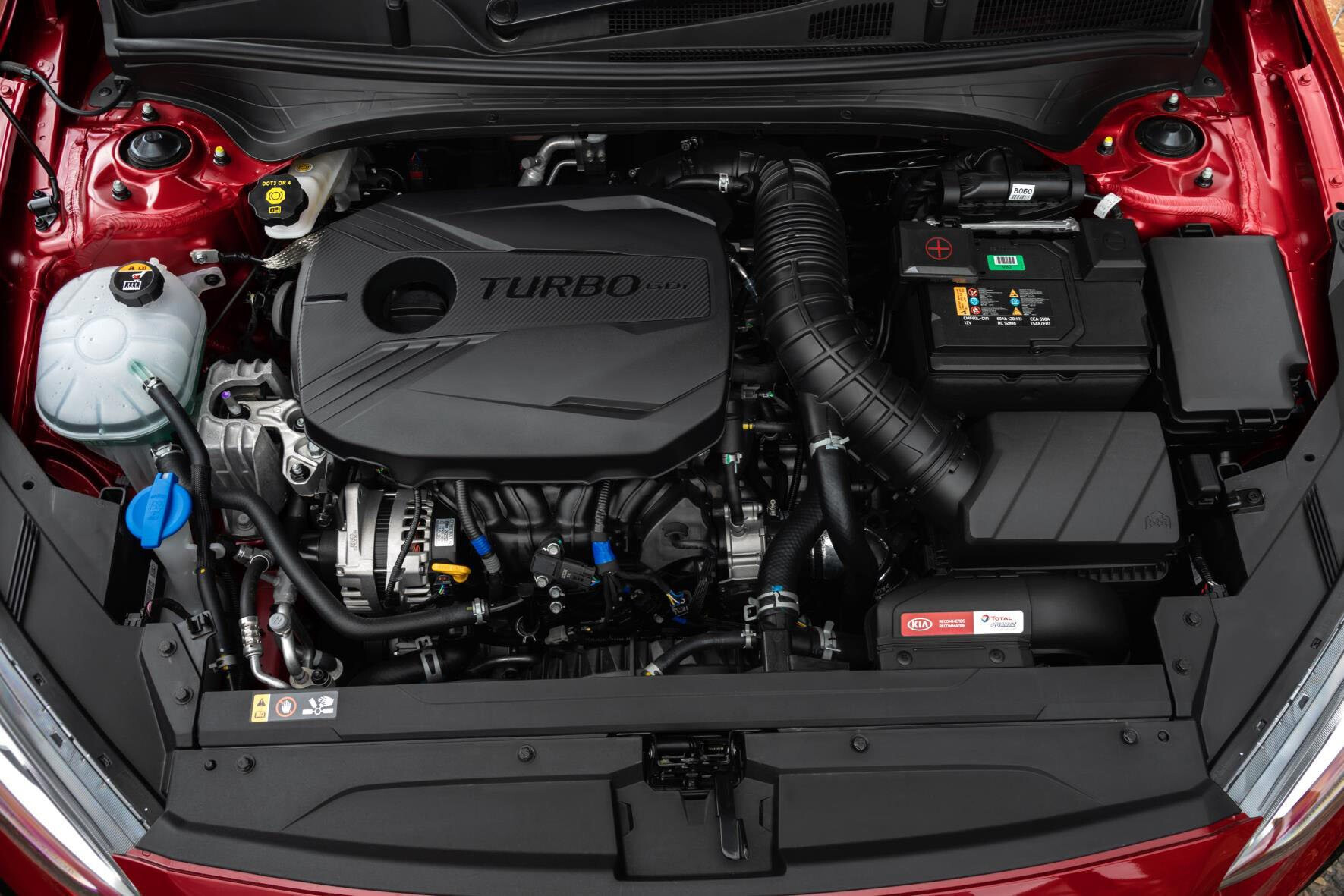 The main reason you wouldn’t choose this engine is that it’s only available in the most expensive Cerato, the GT, and you want to buy a more affordable version. This would bring you the 2.0-litre petrol engine that carried over from the previous model.

While a little dated, the 2.0-litre is a flexible engine that performs well in the city and cruises comfortably on the highway.

The Cerato S and Cerato Sport come with a six-speed manual gearbox but offer a six-speed conventional auto as an option. All other Ceratos have the auto as standard.

Spending as little as possible on a Cerato will get you a Cerato S manual, which has cloth seat trim, halogen daytime running lights, manual air-conditioning and 16-inch steel wheels with plastic covers. 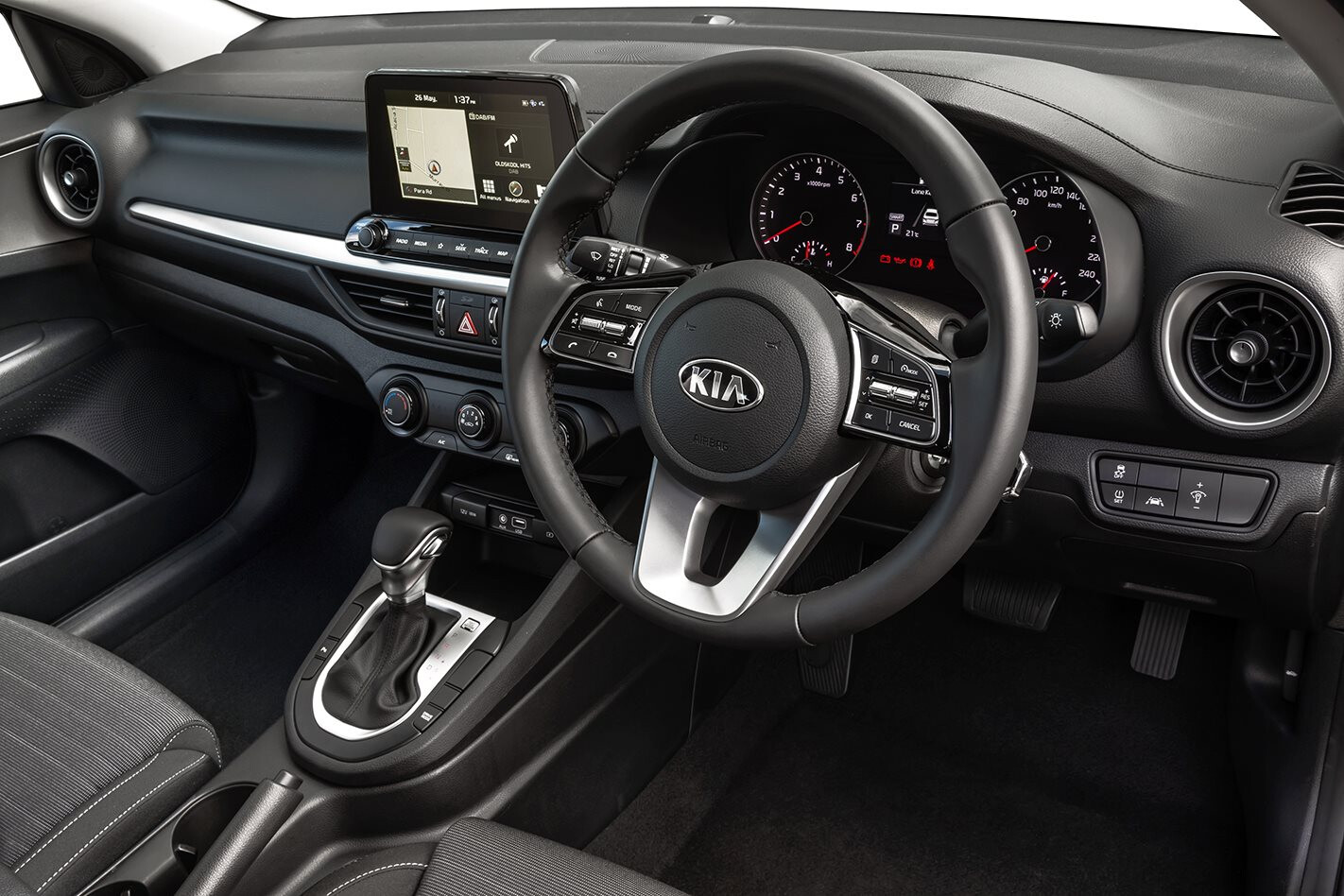 The automatic transmission is also a $1500 option, and you can also add a Safety Pack that brings the features that come with the Cerato S Safety Pack, with the auto version also gaining adaptive cruise control.

Spend more again on the Cerato Sport+ and you get the automatic transmission and safety pack as standard, along with a more advanced autonomous emergency braking system that also detects pedestrians and cyclists. 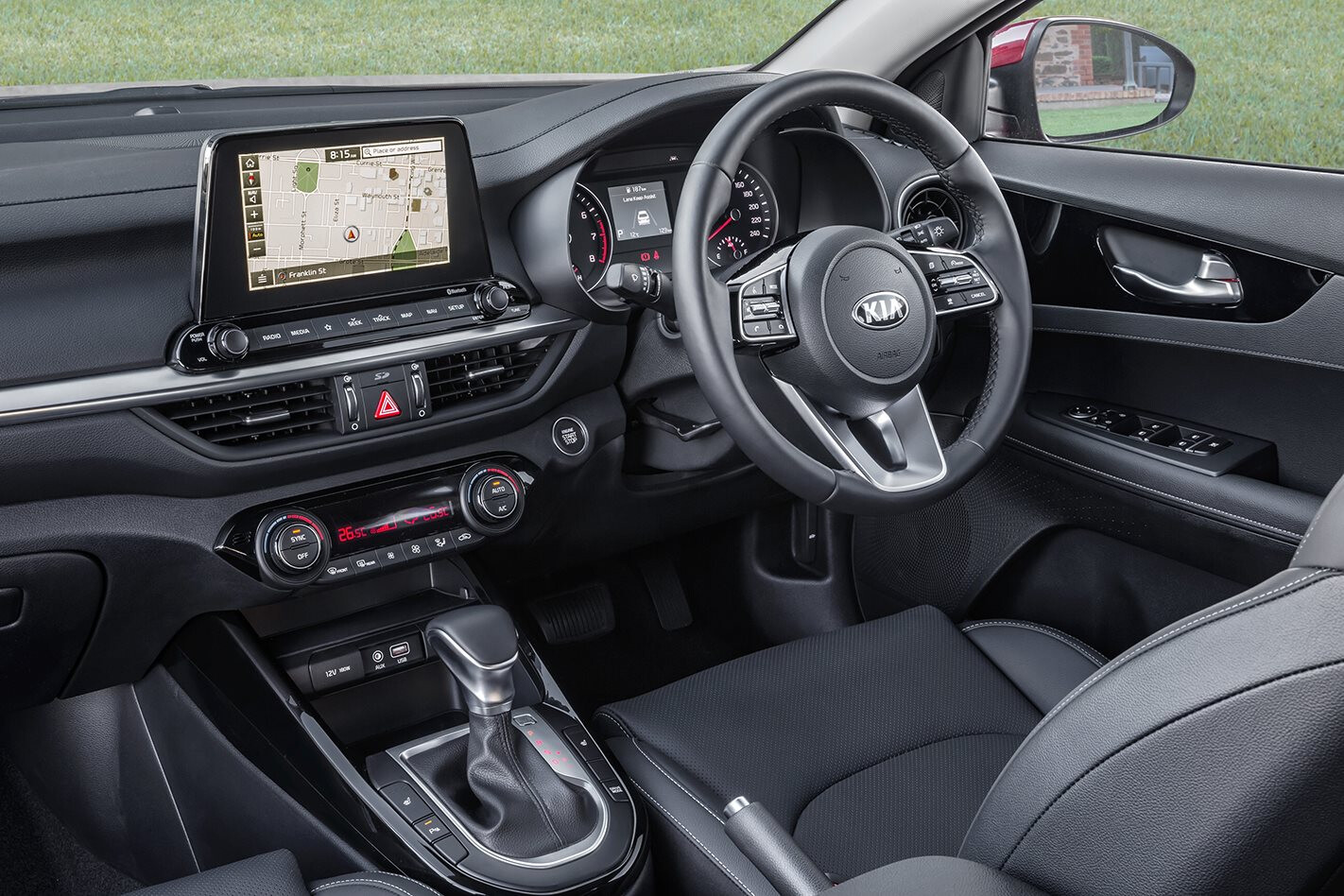 The leather-appointed seats are heated at the front, with powered settings for the driver including lumbar support. The centre console has a sliding armrest.

There are two optional safety packages available for Cerato S, Sport and Sport +.

Safety Pack 1 adds adaptive cruise control, autonomous emergency braking with pedestrian/cyclist detection braking (that are standard in Sport+), rear cross-traffic alert and blind-spot monitoring to S and Sport for about $1000.

Safety Pack 2 brings blind-spot detection, and rear cross-traffic alert to the Sport+ for an additional $500.

The range-topping Cerato GT, comes with both safety packs as standard, as well as the better 1.6-litre turbocharged petrol engine, and seven-speed dual-clutch automatic transmission. The GT’s leather seats are sportier too, with improved side bolstering, and have two additional seat settings for the driver and memory for two different driving positions. The seats are also ventilated as well as heated.

The steering wheel is also sportier, with a flat bottom and perforated leather, the pedals have metal finish, and there’s a wireless phone charging pad.

The lower-profile 17-inch tyres on the Cerato Sport and Sport+ and 18s on the GT don’t smother bumps quite as well, because there is less air between the wheel and the road. They could also cost a bit more to replace.

You don’t have an option of a cheaper manual transmission if you upgrade to the Cerato Sport, Sport+ or GT.

Clear White is the colour that doesn’t come with a surcharge. All other colours cost extra.

How comfortable is the Cerato?

The Cerato interior design is clean and elegant, with crisp instruments and a large central touchscreen that looks premium. It’s also ergonomically friendly, from the buttons and switches on the steering wheel to the main audio and ventilation controls placed quite high on the dash.

Storage is good for a small car, with a centre console tub, map pockets with bottle holders in all four doors and two cupholders each for the front and back seats. The centre console also has two USB ports, though only the high-grade Cerato Sport+ and GT have a seatback pocket and rear-seat air vents.

The Cerato GT’s front seats are far more deeply bolstered than the other versions, meaning much better lateral support through corners, and greater comfort and support overall.

In terms of climate control, seat ventilation or heating, space to drop your phone and wallet, the Sport+ and GT score top marks. 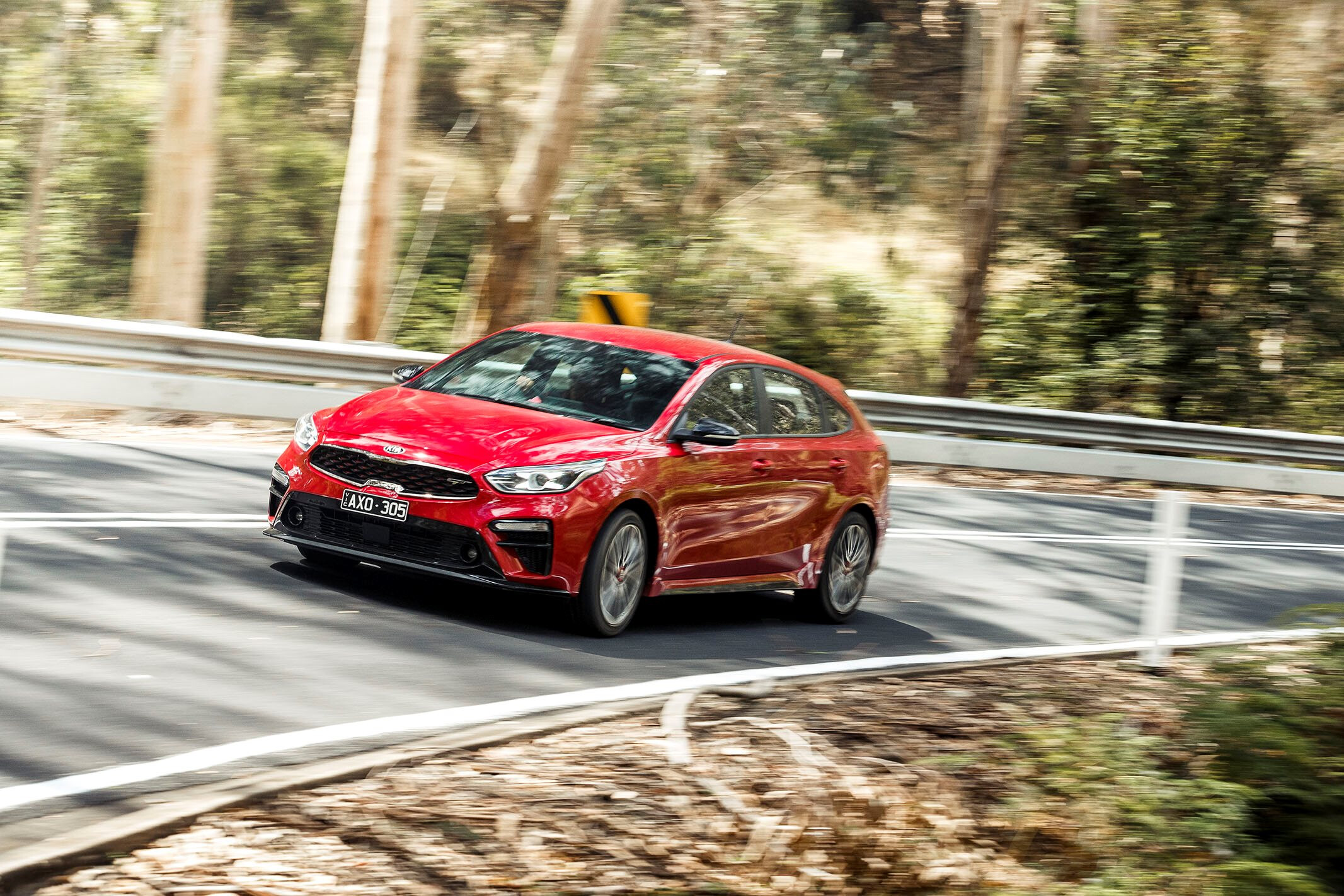 A local suspension calibration ensures all Cerato versions have decent ride comfort but GT can be a little taxing on long drives. Besides some thumping on rough-edged asphalt, the suspension is fairly well contained, though can border on floaty at higher speeds.

What about safety in a Cerato?

Six airbags, including two front, two side and two curtain inflators, contribute to good occupant protection in a crash, and rear-seat seatbelt reminders add security for people travelling with children or forgetful adults.

All Cerato sedans are equipped with autonomous emergency braking (AEB). In the S and Sport this detects vehicles in front and if necessary stops the Cerato to avoid or mitigate a collision. Lane-keep assist is another range-wide standard.

The Sport+ has a more advanced AEB system that also detects pedestrians and cyclists. This is also available, along with adaptive cruise control, in the S and Sport as an optional safety package.

Blind-spot detection, and rear cross-traffic alert that detects a vehicle or pedestrian coming from either side behind you when reversing, are available at extra cost for all three Cerato variants.

The Cerato GT comes standard with all the above safety features.

The Australasian New Car Assessment Program (ANCAP) has given two different ratings to the Cerato. The S and Sport versions were given a Four Star rating in May 2018 because they lack active certain active safety features including the advanced AEB, though they scored well for crash protection. The Sport+ and GT come with a Five Star rating.

The Cerato S, Sport and Sport+ provide a solid driving experience. The steering feels light but direct and the ride feels stable and tied-down in most regular driving conditions. It grips fairly well, but its cornering performance is typical front-wheel-drive Korean – safe, but unexciting.

The suspension, which has been specifically tuned to handle Australian roads, feels at home soaking up bumpy roads and handles corners with good grip and a satisfying sense of balance.

The 2.0-litre engine is a willing worker, even if it is not an inspiring element of the Cerato driving experience. It gets vocal when you ask for all of its performance, and up steep hills or with passengers aboard it can feel short on power and torque.

The six-speed automatic transmission is smooth and decisive.

The six-speed manual available in the Cerato S and Cerato Sport is an agreeable gearbox with a light shift action and is quite enjoyable to drive.

The 1.6-litre turbo-petrol four makes a world of difference to how the Cerato drives. It digs in early and feels eager and strong and doesn’t sound strained at higher revs like the 2.0-litre. It responds well to accelerator inputs aided by the seven-speed dual-clutch transmission.

Further driver satisfaction comes from the tauter chassis tune and improved wheel and tyre package resulting in an unashamedly firmer ride that’s felt around town but pays off on open roads where you’ll appreciate the better body control.

Apart from the Stinger, we reckon the Cerato GT could just be the best-driving Kia in the range.

The Cerato has a spacious back seat that’s welcoming for two – or for three small people. Headroom is adult-friendly and legroom very good, too.

For times when only two passengers are in the back, there is a fold-out armrest with a pair of cup holders. 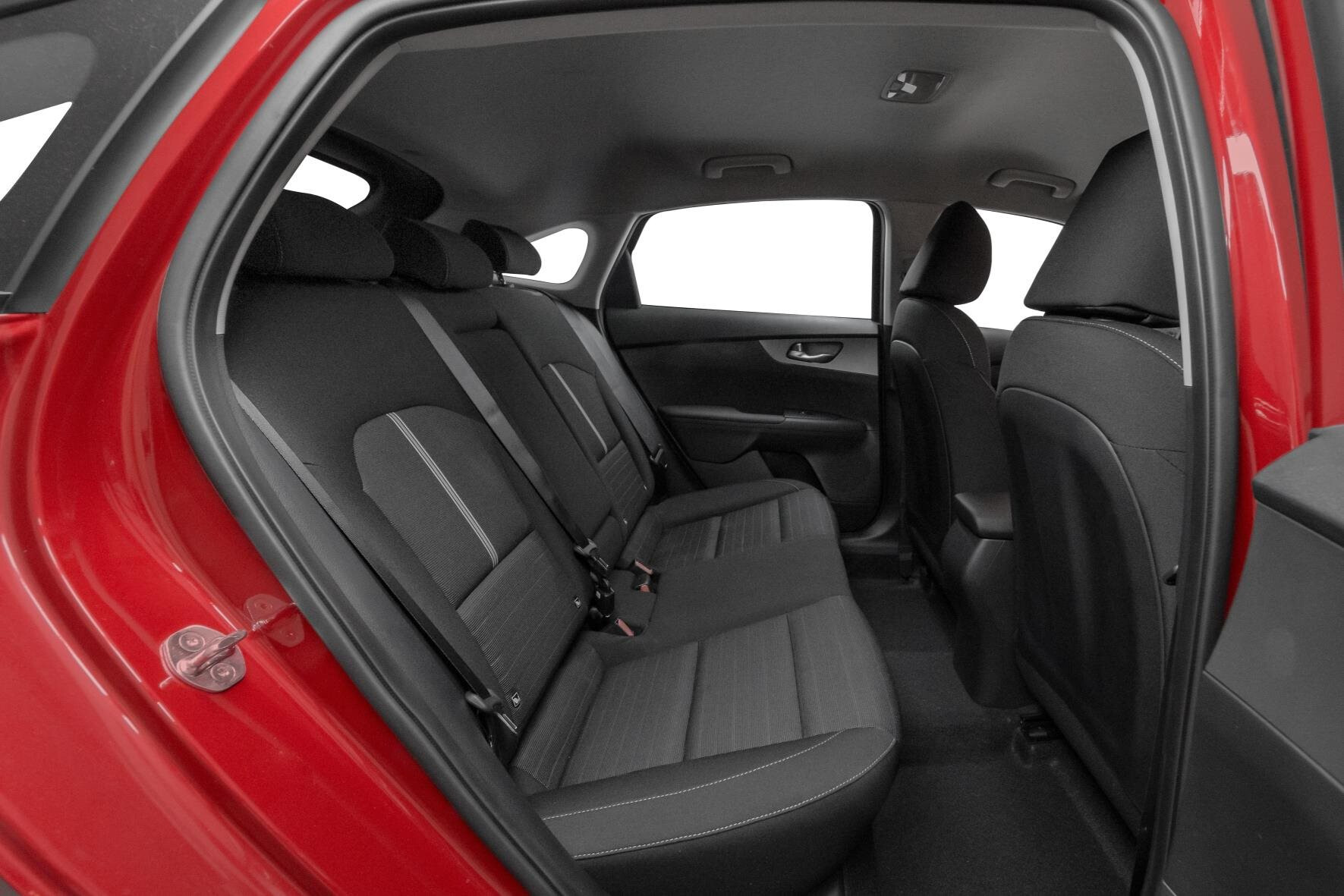 The Cerato Sport+ and GT have dedicated air-conditioning vents for rear passengers, and are the only versions to have a storage pocket on the front seat backrest

How is the Cerato sedan for carrying stuff?

The Cerato hatch has one of the biggest boot spaces in its class, which expands from 428 litres below the cargo cover, while the sedan holds up to 502 litres. 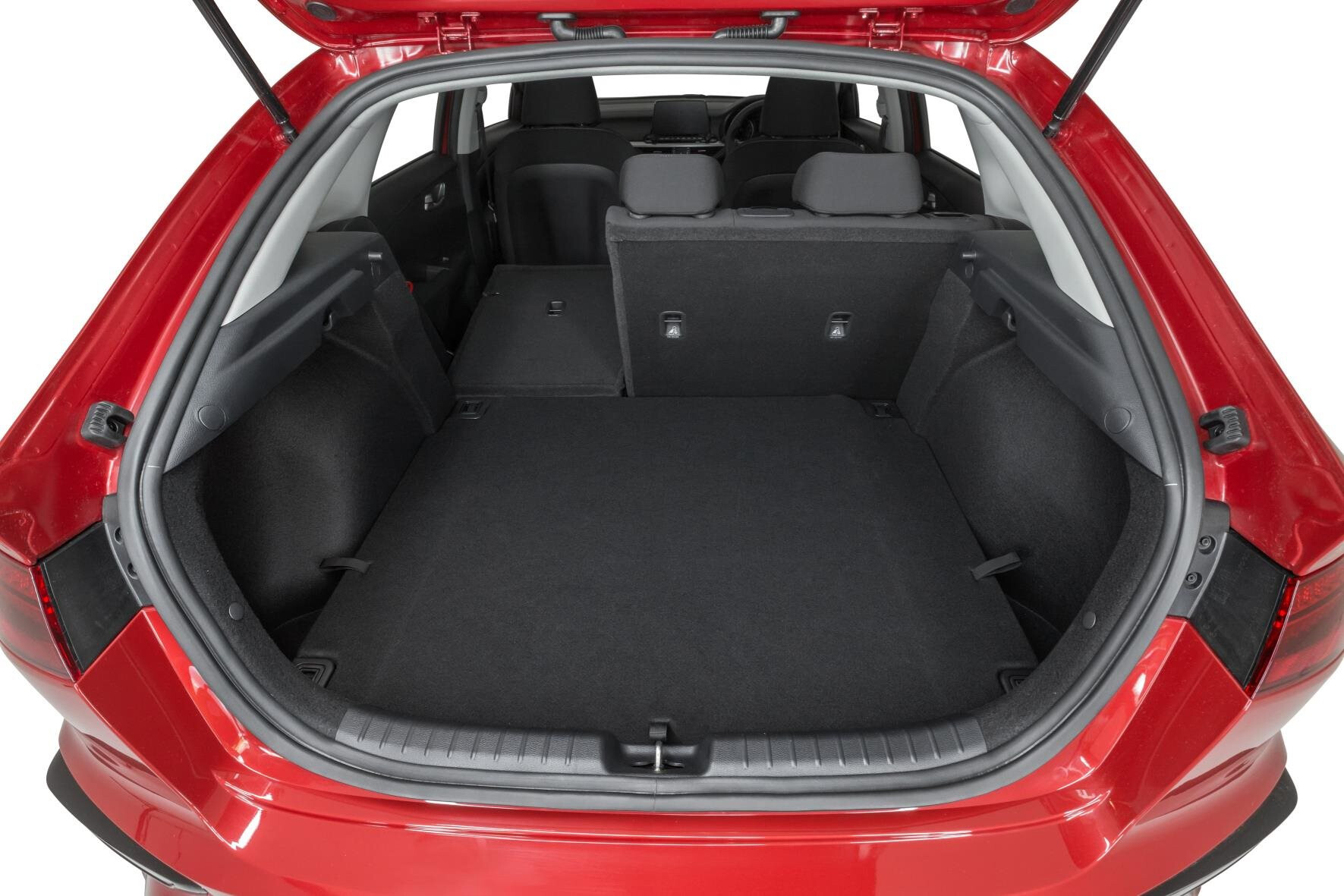 The hatch (pictured) does offer more practicality though, with a high-opening tailgate and bigger aperture to get bigger loads in.

The Cerato hatch has a braked towing capacity of 1100kg and the sedan 1200kg, which are both handy if you need to haul a small trailer.
MORE Boot sizes of Australia's favourite sedans

Where is the Kia Cerato sedan made?

The Kia Cerato is produced in South Korea.

In the non-GT versions, perhaps the stronger response to the accelerator that you might enjoy in a turbocharged small sedan such as a Ford Focus, some Honda Civics, Hyundai i30, Renault Megane or Skoda Octavia.

Or the greater security in slippery conditions of all-wheel drive, which is standard on a Subaru Impreza.

Other small cars you might consider include the Mazda 3, Hyundai Elantra, Toyota Corolla and Mitsubishi Lancer.

The Cerato GT the most impressive version, given its considerably superior performance and handling, sizable list of standard equipment and more upmarket presentation courtesy of leather upholstery.

It’s not all glitter, however, given that variant also packages a more capable AEB system for better safety, along with rear-seat air vents, dual-zone climate control and heated front seats – features most buyers would be keen to have.

If you’re not too fussed about having the GT’s extra oomph than you can opt for the Cerato Sport+ which brings most of the GT’s equipment levels and about $4000 in change.

Are there plans to update the Cerato sedan soon?

The fourth-generation Kia Cerato sedan arrived in Australia in June 2018 and for the rest of the year was sold alongside the previous-generation Cerato hatch.

The all-new hatch arrived at the beginning of 2019, along with the first-ever Cerato GT in both hatch and sedan body styles.

In October 2019, Kia added a manual version of the Cerato Sport for the 2020 Model Year and also threw in adaptive cruise control for the automatic Sport with the optional safety pack option.

Expect a light upgrade sometime in 2022.