Jeep’s new JL Wrangler has been dealt a hammer blow ahead of its early 2019 launch, scoring one star out of a possible five in Euro NCAP safety testing. It's one of the lowest safety scores ever achieved in the modern era.

While it’s still too early to determine if the Euro NCAP score will translate directly to Australian-specification cars, ANCAP does take crash data directly from its European counterparts, which negates the need to crash-test cars locally.

The test score, which came out overnight in Europe, showed that the left-hand-drive four-door Wrangler tested scored poorly in one of four categories it was marked under. Under Euro NCAP regulations, the lowest score from all four categories forms the basis of the final mark.

It draws parallels to the two-star score achieved by the Ford Mustang in early 2017, which scored poorly in the area of rear occupant protection.

In the case of the Wrangler, it scored 32 per cent in the category of Safety Assist, which involves the testing of systems like speed assistance, seat belt reminders, lane support and AEB operation. The test car wasn't fitted with AEB.

It scored just 50 per cent in the Adult Occupant test, indicating some deformity of the A-pillar and deforming of the footwell area on the driver's (in this case, left) side. "Deformation of the footwell showed that the structure had reached the limit of its integrity," read part of the report.

The Wrangler scored well in two other areas, including Child Occupant (which measures impacts on passengers seated front and rear) and Vulnerable Road Users (pedestrian impact and AEB operation for pedestrians and cyclists).

A statement from Jeep’s US press office is unequivocal in its defence of the JL Wrangler.

“The new Jeep Wrangler – an award-winning vehicle with unmatched capability and worldwide appeal – meets or exceeds federal safety requirements in every market in which it is sold,” it reads.

“Further, the Jeep Wrangler is engineered to deliver superior performance and unique driving experiences under the most demanding conditions. Testing protocols that apply exclusively to urban scenarios may not align with such a vehicle.”

The statement reiterates the Wrangler’s boxed body-on-frame construction and use of high-strength steels in critical areas.

“The vehicle offers more than 70 advanced safety and security features, including four standard-equipment air bags and, starting in early 2019, an advanced Automatic Emergency Braking (AEB) system that combines the benefits of camera and radar technologies,” it concluded.

Fiat Chrysler Australia, the importers of the Jeep brand, declined to be interviewed directly, instead issuing a statement that says the company takes safety “incredibly seriously”.

NEXT How does ANCAP testing work?

“The Jeep Wrangler arrives in Australia with a long list of standard and available safety equipment, including front and side airbags, blind-spot monitoring, rear cross-path detection, parking sensors, a rear-view camera and autonomous emergency braking, all of which is paired with the use of high-strength steel in its construction designed to protect the cabin in the case of an accident,” says the company.

An FCA source has confirmed that the 2019-specification JL Wrangler will be sold locally with AEB when it hits showroom floors in March next year.

The Wrangler also carries Australian Design Rule (ADR) approval for use on Australian roads, despite any safety score issued by crash test authorities.

ANCAP, meanwhile, told WhichCar that it’s too early to determine what score the Wrangler will be attributed under the local scheme.

“Until the local specifications are confirmed, ANCAP is unable to assess if the European test results and subsequent star rating can be applied to local models.”

Mr Goodwin added that the European result is “disappointing”.

“I’d encourage FCA to use the opportunity to improve the safety result in time for its Australasian launch,” said Mr Goodwin. 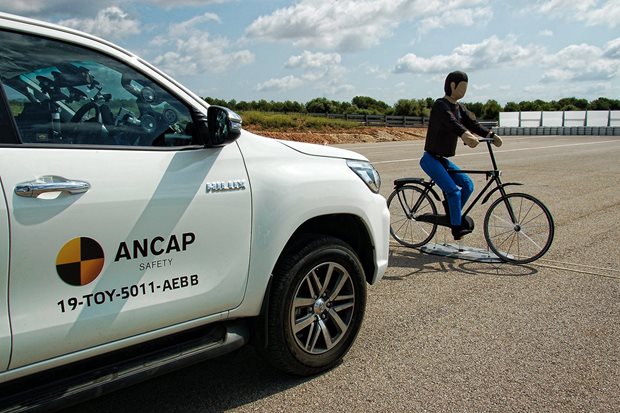