The Subaru XV brings you the elevated outlook many people enjoy in small SUVs, while performing much like the well regarded conventional hatchback it is based on. Cool-looking wheels, plastic cladding on the lower body and a more exuberant palette of colours add personality, and all-wheel drive helps control in poor conditions. This review covers cars on sale new prior to July 2017.

Trying to squeeze the family’s holiday luggage into the space behind the rear seats. Even the Impreza hatchback has more room there – but that’s because the XV carries a full-sized spare tyre. However, the XV has more luggage space than some alternative small SUVs.

The XV drives all four wheels, and it is classed as a small SUV, lower priced.

Bluetooth phone and audio connectivity, with a voice command function and audio controls on the steering wheel, and a touchscreen (6.2-inch on the least expensive version, the 2.0i). A radio and CD player, and Aux and USB inputs for the MP3 compatible sound system.

Hill-start assist, which operates the brakes automatically to make take-offs on hills easier.

All-wheel-drive, which improves drive and stability on slippery surfaces.

Seven airbags: two directly in front of the driver and front passenger; one alongside each front occupant to protect the upper body; a curtain airbag on each side to protect the heads of front and rear occupants; and a knee protection airbag for the driver.

Ten metallic, pearl and silica colours are available, and they come at no additional cost. The XV is offered in more vibrant shades than the Impreza, among them the eye-catching Tangerine Orange Pearl.

The sole engine available with the Subaru XV is a 2.0-litre petrol four-cylinder. When teamed with the continuously variable automatic transmission, it uses 7.0 litres/100km on the official combined cycle test.

With the optional six-speed manual it consumes 7.3 litres/100km, but you can make more of the engine’s modest power output with this gearbox.

Fuel use in city driving is reduced by the XV’s automatic stop/start system, which shuts off the engine when you stop and restarts it when you press the accelerator to drive away.

The XV’s engine differs from those found in cars from most other makers, in that it lies flat across the engine bay rather than standing up vertically. This places the weight of the engine lower in the car, which helps it steer more responsively.

Stepping past the least expensive 2.0i and into the 2.0i-L brings you a power-operated sunroof, a bigger 7.0-inch touchscreen interface with satellite navigation, and an SMS-reading function (compatible with some phones but not all). Dual-zone air-conditioning allows different temperatures for each side of the cabin. The steering wheel and gear shift lever are trimmed in leather.

Spend more again for the 2.0i-S and you get seats trimmed in leather. The front seats can be heated, and the driver’s seat is power-adjustable. Headlamps use very bright Xenon bulbs for low-beam, and switch on automatically when it’s geting dark. Windscreen wipers operate automatically when it rains. A smart key can remain safely in your pocket or bag while you unlock the car and drive away. Control pedals are finished in aluminium with rubber grip pads, for a sporty look and feel.

The sunroof reduces headroom for occupants in the front.

You might slide around more on the leather seats than on the cloth versions, in corners.

The Subaru XV is very comfortable to drive and ride in, although its suspension feels noticeably firmer than the Impreza’s.

The XV is among the quietest of the small SUV set. Its cabin is well insulated from outside noises, such as the noise of the suspension working and the sound of the tyres rolling over coarse road surfaces. The only noticeable sound at highway speeds is airstream rustle around the large, door-mounted side mirrors.

The cabin is made from good plastics and textiles, which fit together well. That brings an air of quality to the driving experience that elevates the Subaru above some Japanese competitors.

Like other small SUVs, the XV’s taller stance – it is 7.5cm higher than the Impreza – brings occupants a more commanding view of the road than they would have from conventional sedans and hatchbacks. Supportive standard seats stay comfortable for drives of two hours, and the driving position is easily tailored thanks to the standard height- and reach-adjustable steering column. The eight-way power- adjustable driver’s seat in the 2.0i-S makes it even easier to get comfortable behind the wheel.

The forward location of the XV’s A-pillars (those either side of the windscreen) allows good vision for tight corners and roundabouts, increasing primary safety. The door-mounted exterior mirrors aid vision in the same driving conditions.

No Subaru XV offers autonomous emergency braking or other active crash-avoidance features, however.

The Subaru XV is among the more enjoyable small SUVs to steer. It is based on a conventional Subaru hatchback, the recently superseded Impreza, and is nearly as responsive, notwithstanding its greater ride-height and all-season tyres.

The electrically assisted power steering is weighted just right, and the car turns into corners well. The XV’s body does not lean much when cornering, with help from the relatively firm suspension and the flat layout of the boxer four-cylinder. This adds to the feeling of good handling.

However, for those who sometimes drive with enthusiasm, the XV becomes less impressive. Vigorous driving exposes the limitations of the standard all-season tyres, which ultimately have less grip on paved surfaces than normal passenger car tyres.

The engine is a weak link in driver enjoyment of the XV. It is very smooth and quiet, and feels good in normal driving. But on hilly roads, or when asked to accelerate the car quickly, it lacks the ability to respond decisively.

The continuously variable automatic transmission can be manually operated using gear-shift paddles behind the steering wheel, which makes it more fun than some conventional automatics.

Entry and egress from the back of the XV is not quite as easy as it is with some alternative SUVs, such as the Mitsubishi ASX. That is because the XV shares its body with a conventional hatchback.

A comfortable, well-angled base and backrest, and good shoulder and foot room, contribute to a good level of comfort for rear passengers once inside.

There are no rear air-conditioning vents, although this is a common omission in small SUVs at this price.

The seat can carry three passengers, with lap and sash belts for all.

The Subaru XV provides less luggage space behind the rear seats than many small hatchbacks – its 310 litres is 30 litres less than the Impreza has, for example. This is because the XV comes with a full-sized steel spare wheel, which could be very handy on an extended trip but which takes up more space than the Impreza’s space-saver spare.

Nevertheless, there is more boot space than you get with some popular small SUVs – the Mazda CX-3, for example.

The XV’s cargo volume expands to 741 litres when its 40/60 split-fold seatbacks are folded.

The Subaru XV is manufactured in Japan.

Autonomous emergency braking. Cars with this feature can sense an obstacle ahead (typically another car that has stopped suddenly), warn you of the danger, and brake automatically if you fail to react. All versions of the Mazda CX-3 offer this as an option, for example, and all but the least costly Honda HR-Vs have it standard. (Subaru offers it on its bigger Forester.)

The ability to display some apps from compatible smartphones on the car’s touchscreen, and control them from there, via Apple CarPlay or Android auto. The Suzuki Vitara offers this, for example.

Alternatives that offer turbo-petrol or turbo-diesel engines, such as the Vitara, CX-3, Mitsubishi ASX and Nissan Qashqai, respond more eagerly to the accelerator pedal, particularly from low to medium speeds. They may also be more economical on fuel and offer greater range on a full tank.

Mitsubishi offers a five-year warranty for its ASX.

Among other cars you might consider are the Toyota C-HR and Jeep Renegade.

Absolutely – the Subaru XV 2.0i-L is our pick of the line-up.

It brings very useful extra features over the basic 2.0i, such as satellite navigation, as well as luxuries such as the electric sunroof and leather-trimmed steering wheel.

However the entry-level 2.0i is certainly worth considering if you can do without satellite navigation. It offers most of the necessities, including a reversing camera.

The Subaru XV arrived in Australia in 2012. It received a minor update in May 2015 that focused on a revised touchscreen interface.

An all-new XV went on sale in Australia towards the end of June 2017. It brought a little more power, better handling, more security on loose surfaces, auto-braking via Subaru’s EyeSight suite, and better smartphone integration (from support for Apple CarPlay and Android Auto), among other changes. 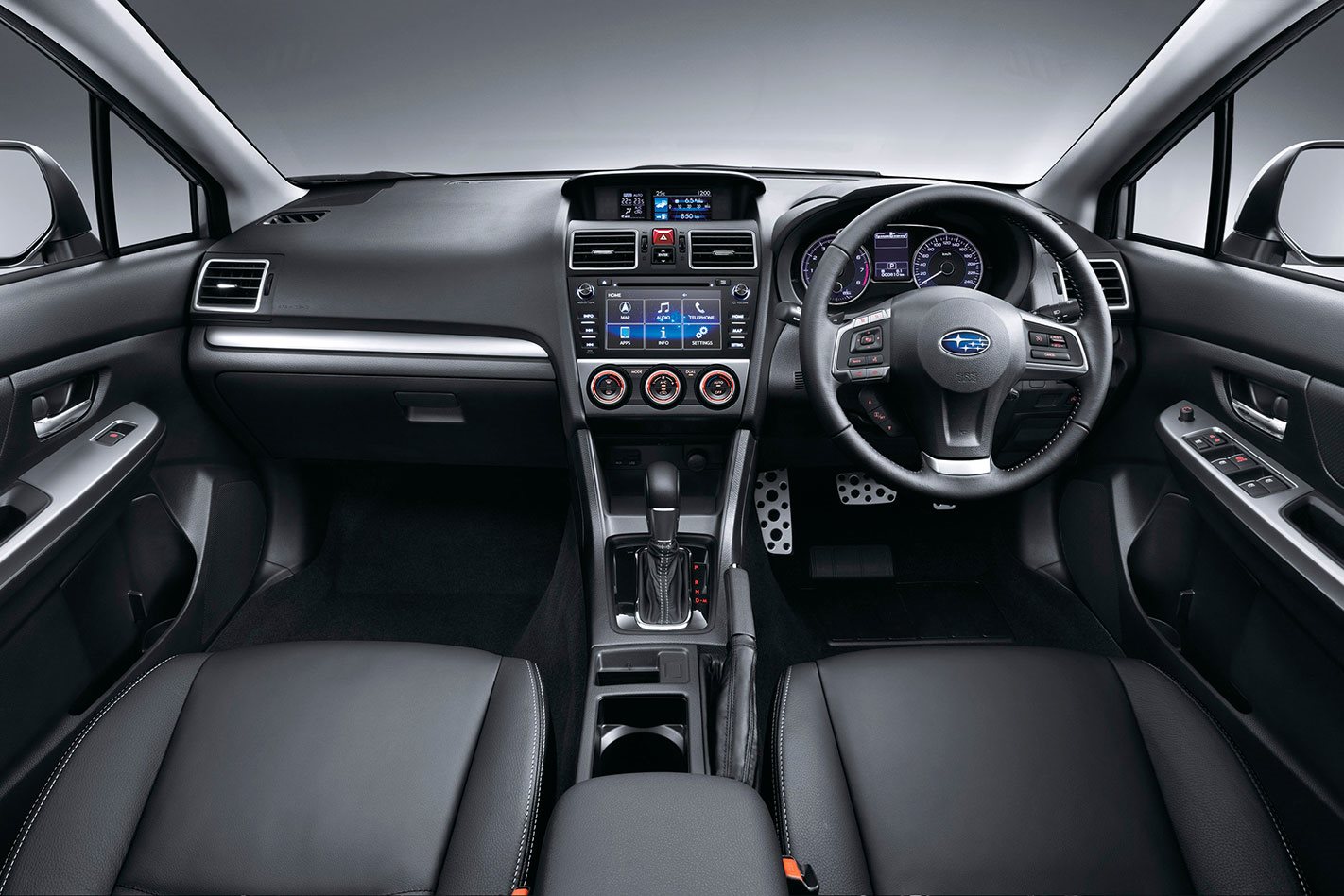