Mitsubishi's family SUV gets suite of upgrades making it better than the last Outlander, but still not quite enough to take top honours in the segment.

The updated version of Mitsu’s family SUV. The outgoing version was a bit pants, so Mitsu’s given it quite the going-over, including a new more stylish exterior: that new nose is called the “dynamic shield”, and it really does make the new model look a bit more special. (Mitsubishi says “exterior appeal is a key driver in this segment”, so if you don’t care about anything except how it looks, you can basically stop reading now.)

There’s three spec levels (LS, XLS and Exceed), three engine types (two petrol, one diesel) and three transmission types (manual, CVT and auto), which adds up to a total of eight variants to choose from: see the end of this review for all eight with pricing. For this road test, we only drove the 4WD petrol XLS with the CVT box, and the 4WD diesel XLS with the auto box.

All the new Mitsubishi Outlander variants get new 18in alloy wheels, which (to our eyes at least) look like interlocking wine glasses. Or maybe we were just thirsty at the time.

Mitsubishi’s also spent a lot of time on the NVH equation, with 39 “improvement points” over the last Outlander – and it really is smoother, quieter and more refined inside.

At this point, there’s no new Outlander PHEV, the hybrid electric version – the PHEV remains the same as it’s been since it launched a year ago. 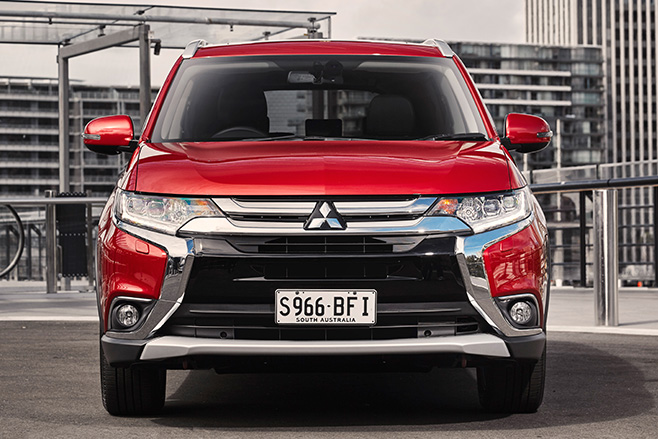 Find yourself some open road and the Outlander is willing to dial itself up if you give it the berries, but there’s no point pretending this is a sporty ride – it isn’t. It’s a family hauler. Tip it into bends at speed and it grips well enough, but it feels weighty and it’s clear the ride has been designed for comfort, not speed. That’s not an insult – if you’re in the market for a seven-seat 4WD, chances are you’re not looking to go racing in it.

But overtaking requires some planning – neither the 2.4-litre petrol XLS (with 220Nm) nor the 2.2-litre diesel XLS (with 360Nm) are beasts of acceleration, though the torquier diesel is better at it. Boringly, we got stuck behind an L-plater and then a pensioner in a LandCruiser on the twisty stretch of National Parks road in Kuring-gai Chase north of Sydney, and the Outlander is not the machine you want for lightning quick overtakes. 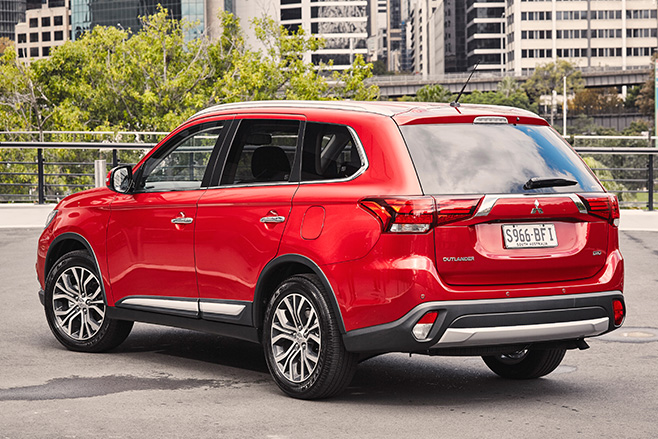 It’s a fine companion for the traffic slog. The seats are comfy, if nothing flash – all manual adjustments in all models except the top-spec Exceed – there’s enough head- and legroom for adults front and back, there’s a decent amount of storage space. It’s quiet inside, even at freeway speeds, and at commuting speeds it’s an easy and compliant drive.

The diesel did get a bit rumbly and grumbly at slow speeds, but nothing too intrusive.

The infotainment system remains as clunky as ever. Honestly, Mitsubishi ought to bump that right up their priority list of things to fix – it’s not intuitive, the sat nav looks like a video game from the Eighties, connecting Bluetooth is a pain, and it simply looks and feels outdated. The infotainment system is one of the most used features in any car, especially a family car – so why would you want this old clunker of a system in there? 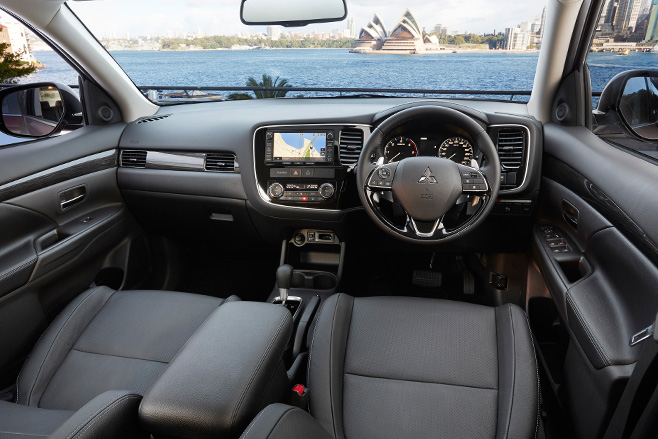 What’s it cost? And is it worth the money?

The 4WD petrol XLS we drove is $36,490, and the 4WD diesel XLS is $39,490. Both are a reasonable buy for the price – especially if you want seven seats. The entry-level LS (2WD with a manual ’box) starts at $28,490, but forgoes the third-row seating – you have to step up to at least the 4WD XLS to get the seven-seat option. All variants get reversing cameras, reverse parking sensors, hill start control, keyless entry, rear air-con ducts and a fairly generous helping of other fruit.

But the Outlander is perhaps best labelled competent, not outstanding. Competent is fine. Competent gets the job done. But it’s not at the level of some of the competition.

Would you take this or a Mazda CX5?

Depends on whether you want seven seats or not. If you have a massive family, or coach a kids soccer team, or run an Uber service for circus midgets, the Outlander’s pop-up third row of seats is perhaps a clincher. But all things considered, we’d opt for the Mazda, which just feels a bit more premium inside.