By Toby Hagon and WhichCar Staff

Toyota’s RAV4 is one of the more popular mid-sized SUVs, and with good reason. Its biggest strengths are its low cost of servicing for the first three years and a reputation for good resale values. Among its best features are great front seats, and on 2WD models an excellent automatic transmission. This review covers RAV4s on sale prior to the facelift of December 2015, which brought revised styling and more equipment.

The bumpy ride at low speeds.

Driving at less than 80km/h on the space-saver spare, until you can fix your full-sized flat tyre.

It is classed as a medium SUV, lower priced – but it is the smallest and cheapest SUV from Toyota.

What features do all RAV4s have?

A 6.1-inch touchscreen with main menu buttons down each side (the buttons make it easier to toggle between different screens, such as audio and phone).

Roof rails. These act as mounting points for the optional roof racks. (If you want to carry something on the roof, you do need the racks.)

A space-saver spare tyre. (A full-sized spare is available as an option).

Electronic stability control, which can help control a skid. All new cars must have this feature.

A capped price servicing scheme under which Toyota subsidises its dealers to service your car. It runs for the first three years or 60,000km, and means the RAV4 is cheap to service over that period.

The 2.2-litre four-cylinder turbo diesel, which is officially rated at 5.6 litres/100km in manual form (city and country combined), or 6.5 litres/100km with auto transmission.

However, the diesel is the most expensive of the three engines offered with the RAV4, and is available only in four-wheel-drive versions.

It performs well, and is easy to drive as an auto. Around town, it can be hard work with a manual ‘box, because it requires you to change gear more often than a petrol engine would.

Most buyers choose one of the petrol engines. The 2.0-litre petrol is fitted to all front-wheel drive versions and is available as a six-speed manual or excellent CVT auto. Fuel use is 7.4 litres/100km officially in auto form – slightly better than the manual version can do.

The 2.5-litre petrol is fitted to all four-wheel drive RAV4s, and is available only as a conventional auto. It offers about 25 per cent more power than the 2.0 in most driving conditions, although the 4WD system increases fuel use.

The CVT, or continuously variable transmission, offered in front-wheel drive models is not restricted to a fixed number of gear ratios, and therefore can match the gear to the driving conditions more effectively. The design fitted to the RAV4 works particularly well. However, the six-speed conventional automatic in four-wheel drive versions also shifts smoothly and intuitively.

The least costly, GX model, RAV4s roll on 17-steel wheels. Step up to the GXL and you get lighter and better looking wheels made from an alloy of aluminium.

The RAV4 GXL also has smart key entry (which allows you to unlock the car while the key stays secure in your pocket or handbag), and headlights that switch on automatically when it is dark. Dual-zone air-conditioning allows you to set a temperature for each side of the cabin. The steering wheel is trimmed in leather, and windows have been tinted to reduce sun penetration. There is a reversing camera, built-in apps for audio streaming, and you can buy a satellite navigation app from dealers.

The most expensive RAV4, the Cruiser, adds partial leather seats (it’s a mix of real and fake leather), a sunroof, a power-adjusting driver’s seat, and a powered tailgate that can be opened remotely. Headlamps dip automatically for oncoming vehicles. There is satellite-navigation, and a better sound system. The wheel size grows to 18inches and the tyres are slightly wider and lower in profile, mainly for styling but also for better grip on hard surfaces.

The RAV4 Cruiser is available only in four-wheel drive.

The sunroof in the Cruiser reduces head room up front by 24mm.

White is the only standard colour: all others cost extra.

Optioning the full-size spare tyre raises the floor height of the luggage bay, reducing load capacity from 577 litres to 506. Additionally, the load space will no longer be flat.

How comfortable is the RAV4?

The RAV4’s front seats are among the best fitted to any medium SUV, with great support that translates to good comfort over longer trips.

Circular air vents on each side of the dash seem retro on what is otherwise a modern-looking and generally classy cockpit layout. A small storage area above the glovebox is handy for odds and ends.

The touchscreen can be fiddly when toggling between radio stations.

Suspension on the RAV4 feels firm at lower speeds but the ride is otherwise comfortable. The steering is light and the car has a tight turning circle, making it easy around town. It is also quiet.

What about safety in a RAV4?

A full complement of airbags gets the RAV4 off to a good start on the safety front. GX variants do not have a reversing camera, but all others do.

The RAV4 Cruiser has a lane-departure warning system, which monitors lane markings and alerts the driver if the car wanders out of the lane.

The Australasian New Car Assessment Program (ANCAP) has given the RAV4 a five-star safety rating.

There are sharper SUVs around when it comes to cornering accuracy (the Ford Kuga and Mazda CX-5, for example), but the RAV4 is not far behind. It is good to drive and stays relatively flat in corners.

On wet road however, the standard Yokohama tyres don’t inspire much confidence.

The 18-inch tyres on the Cruiser are a better bet, improving roadholding with little cost in ride quality.

Those chasing maximum performance will like the 2.5 litre engine, which revs enthusiastically to reach its maximum output.

For extensive country-road driving, the diesel justifies its price premium with lower fuel use and easy highway-speed cruising.

The RAV4 is a light-duty off-roader.

The RAV4 seats three at the rear, for five seats in total. Rear leg room is good and the floor is almost flat, giving the person in the middle more space. The seats are fairly flat but comfortable.

The seatbelt for the middle rear passenger is mounted on the roof, and therefore needs two clips into buckles to latch it.

There are no rear air-conditioning vents.

The load space is fairly broad and helped by a 60/40 split-fold seatback. There is a retractable luggage cover.

There is some underfloor storage in which you can hide small but valuable items.

The tailgate on the Cruiser can be opened from the remote keyfob.

Where is the RAV4 made?

All RAV4s are produced in Japan.

A third row of seats. The Nissan X-Trail and Mitsubishi Outlander each have a seven-seat option.

A diesel engine with more power, an option on some rivals.

Other competitors include the Mazda CX-5, Subaru Forester, Hyundai Tucson and Kia Sportage.

The front-wheel drive GXL with the CVT auto. Our reviewers like the CVT transmission, and this car uses less fuel than the 4WD models. The GXL costs thousands of dollars more than the GX but the extra equipment raises the interior ambience and boosts safety.

When did Toyota update this RAV4?

This generation of RAV4 went on sale in 2013, and equipment was added in 2014. The RAV4 has since been updated. This review covers RAV4s on sale prior to the facelift that arrived in December 2015.

The December 2015 facelift brought a restyled nose, extended the reversing camera to all models, and adjusted suspension settings. Automatic braking and other active safety aids were added to the Cruiser, and were made available as an option for most GXLs. 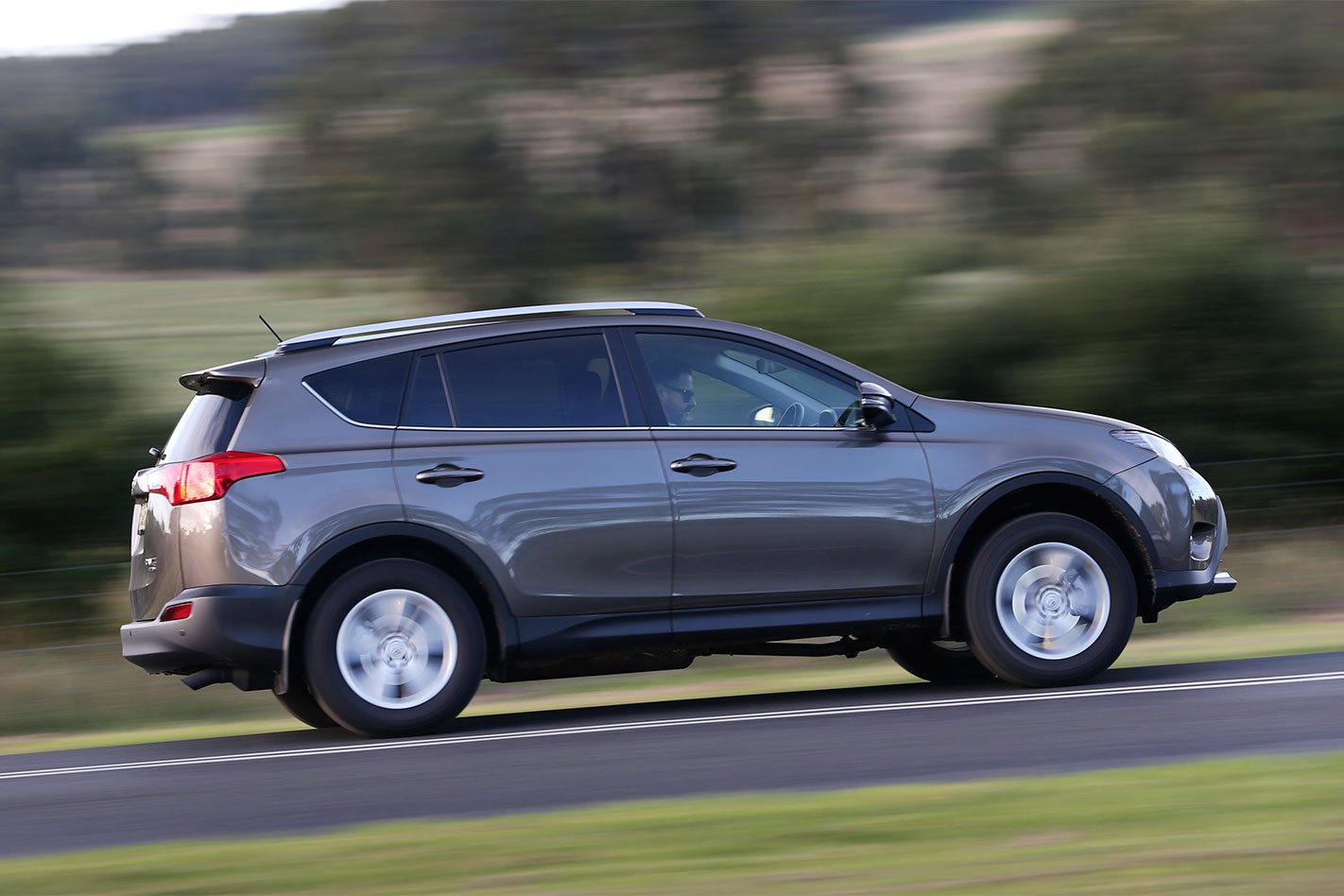 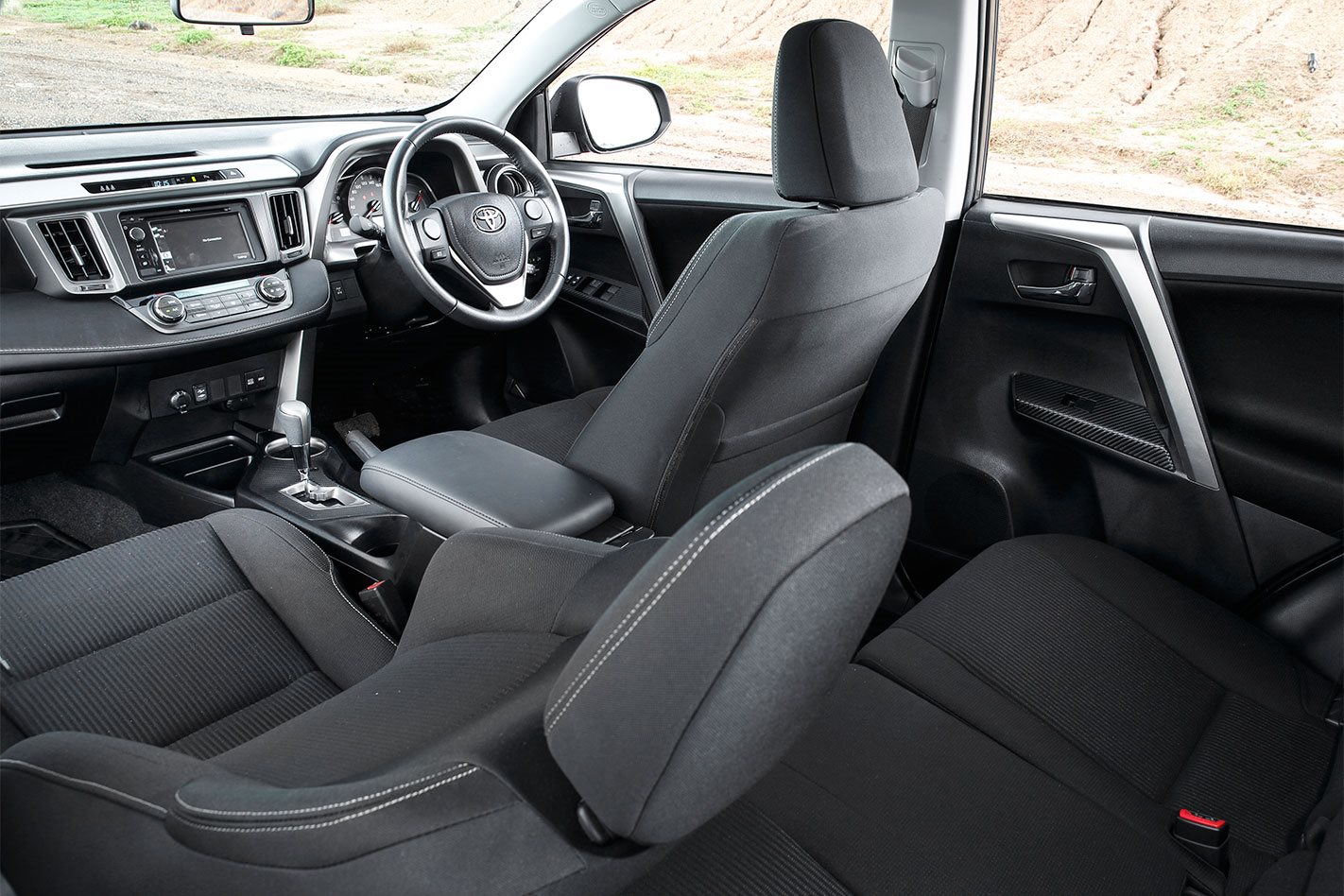 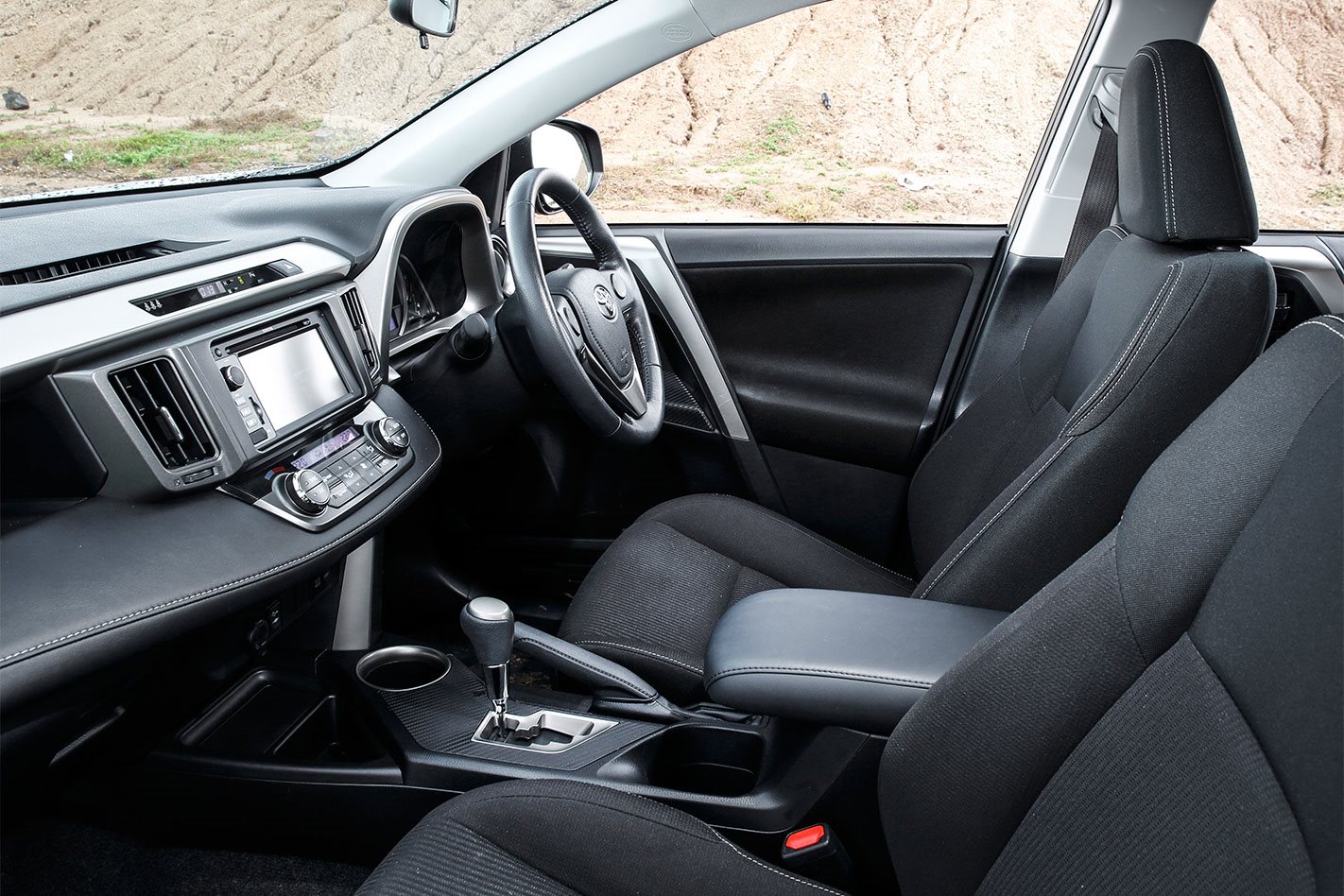 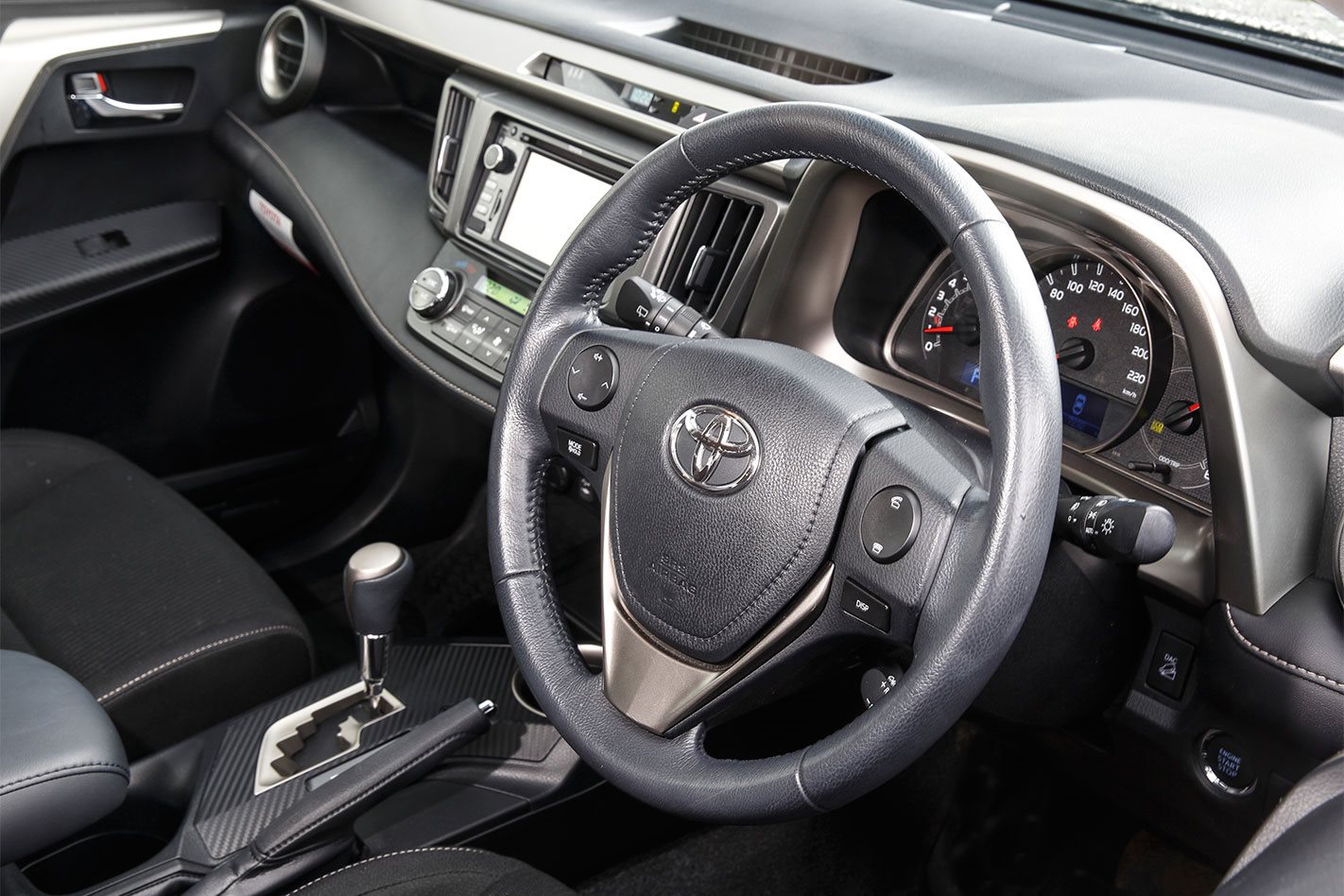 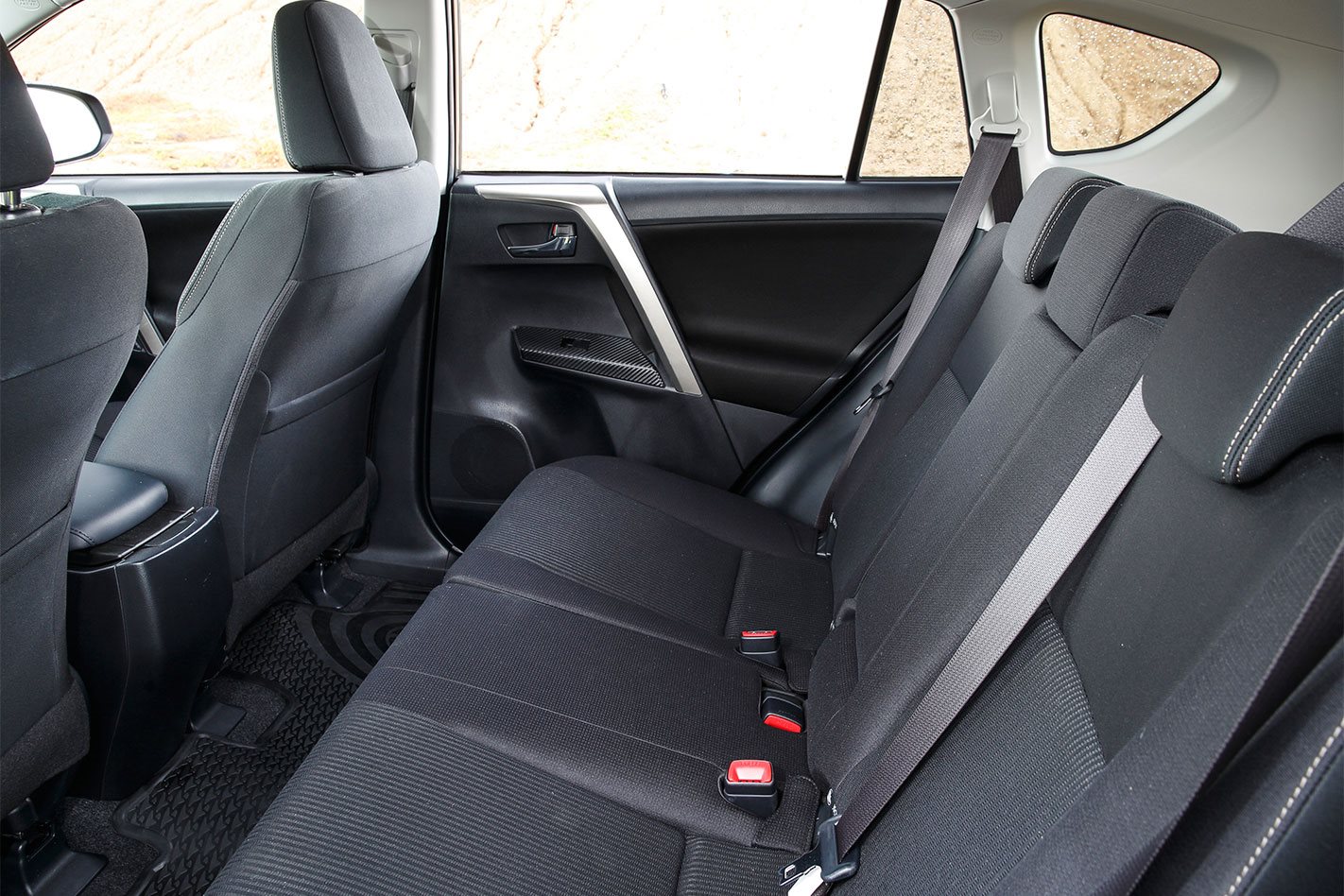 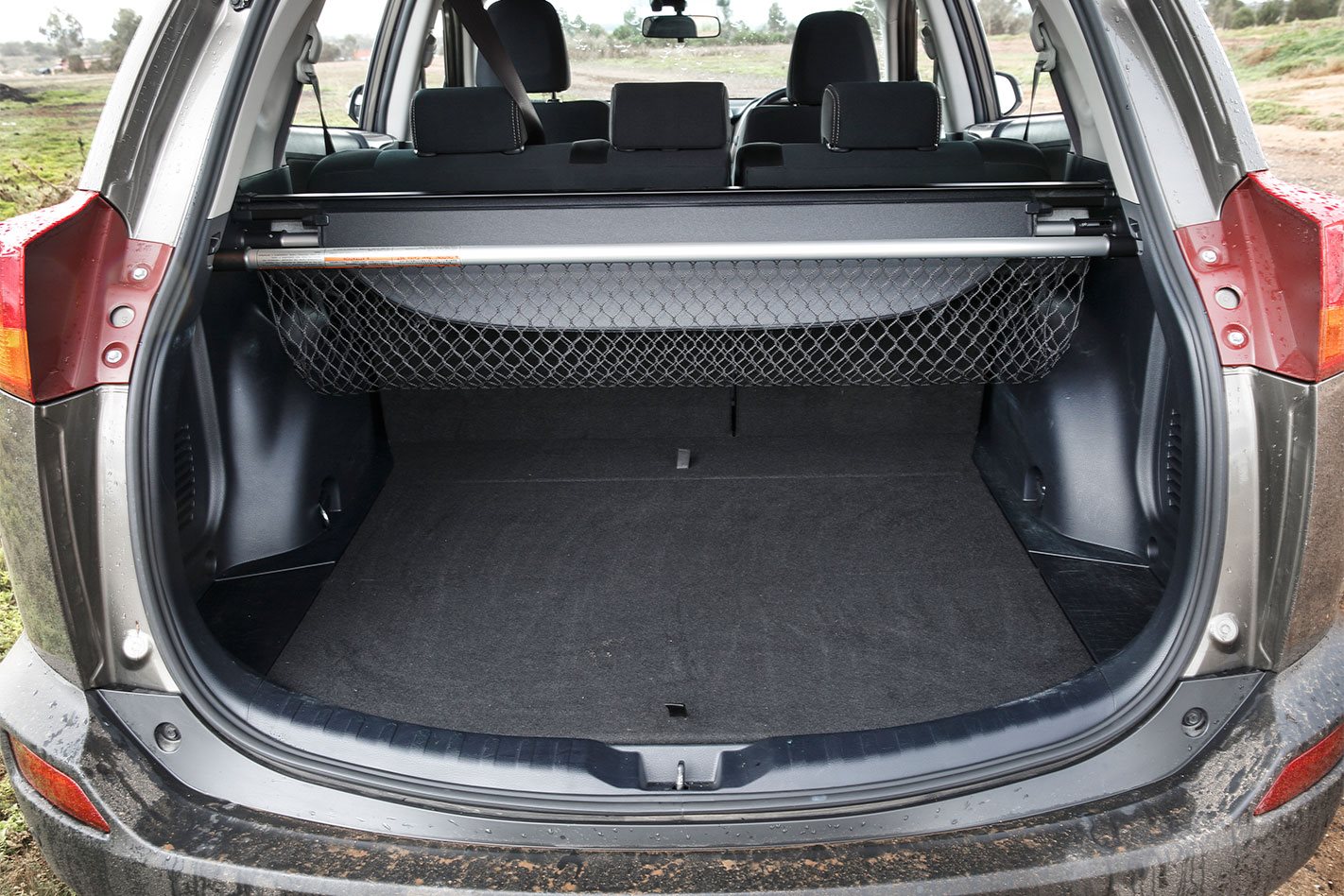 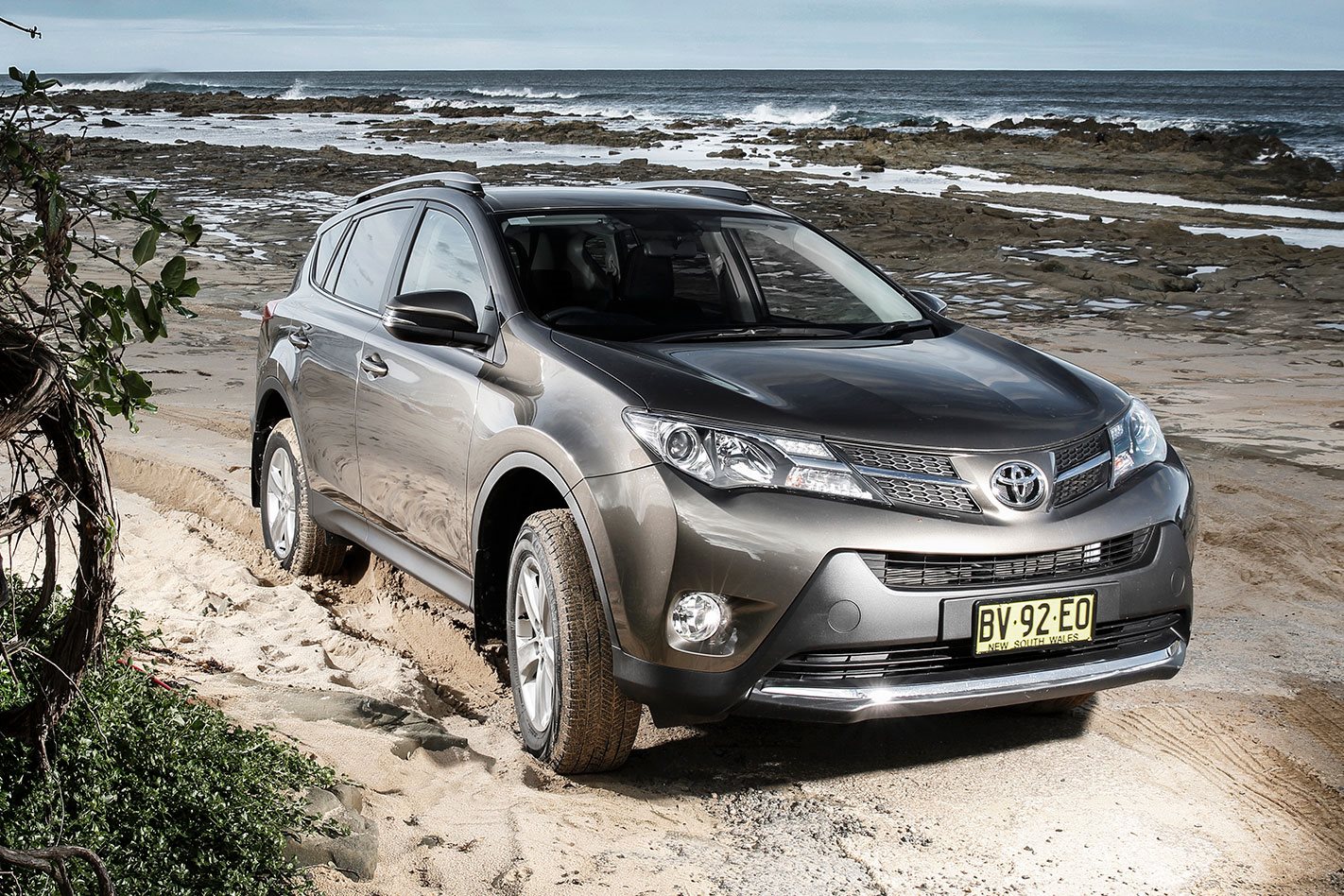 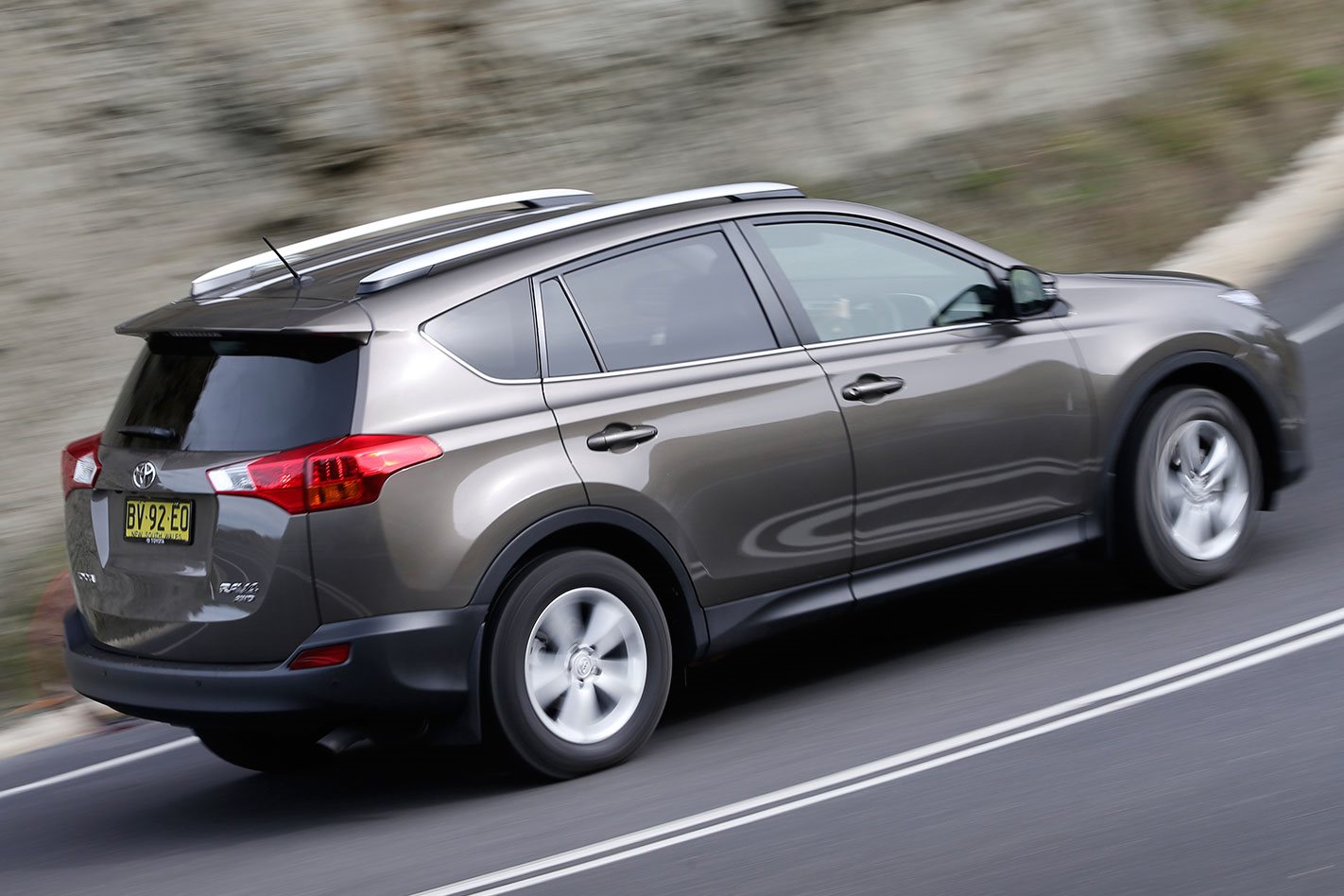 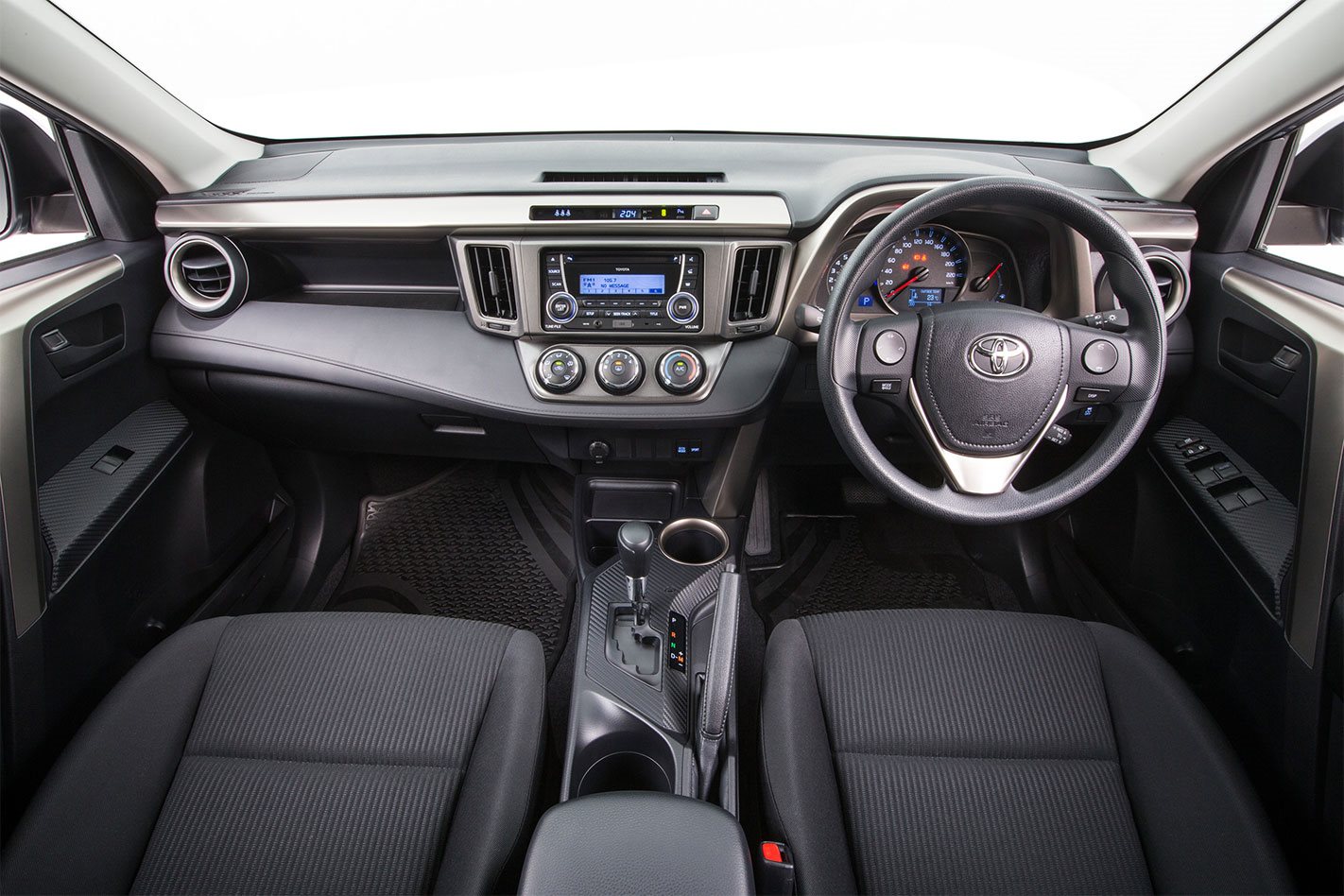 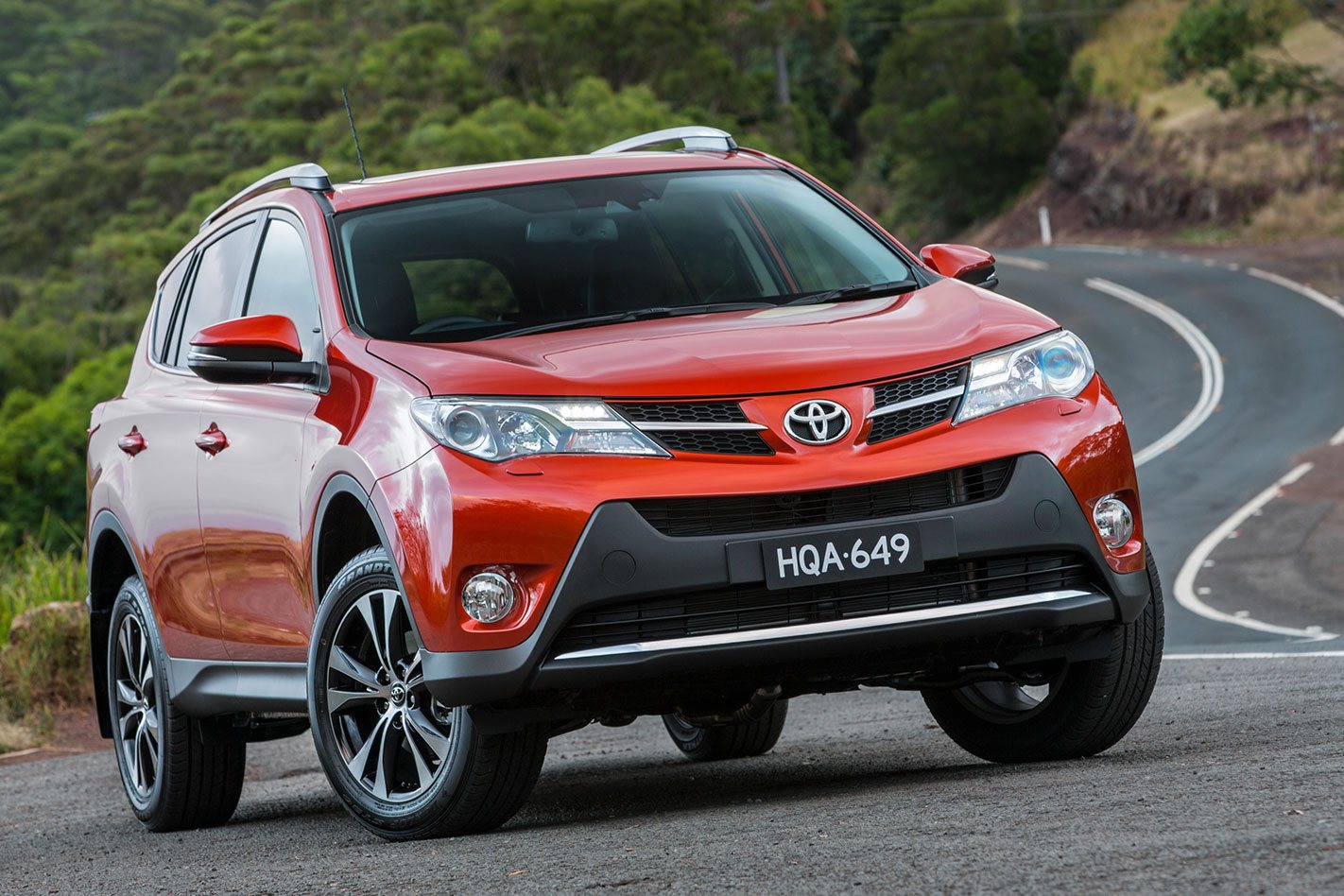 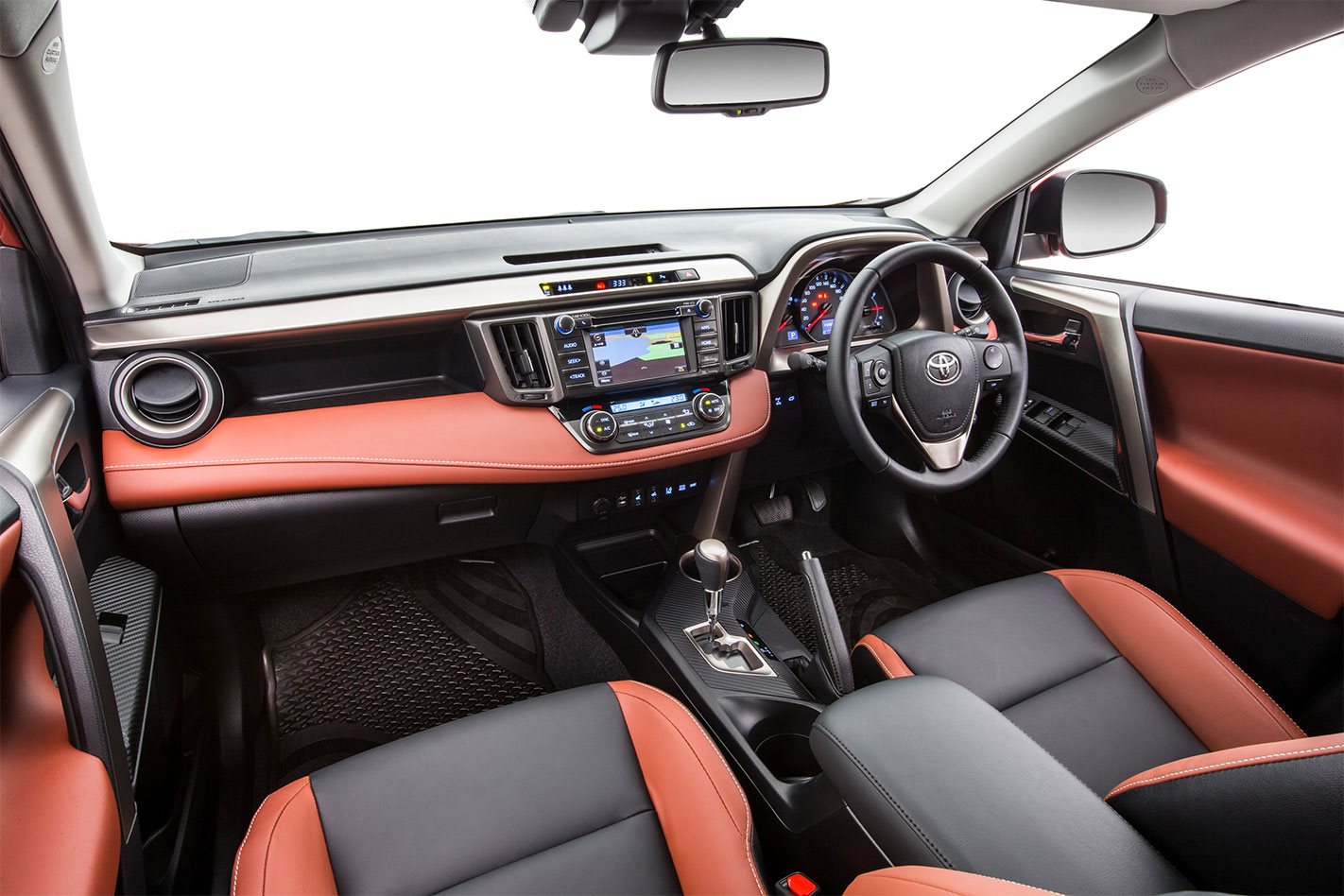 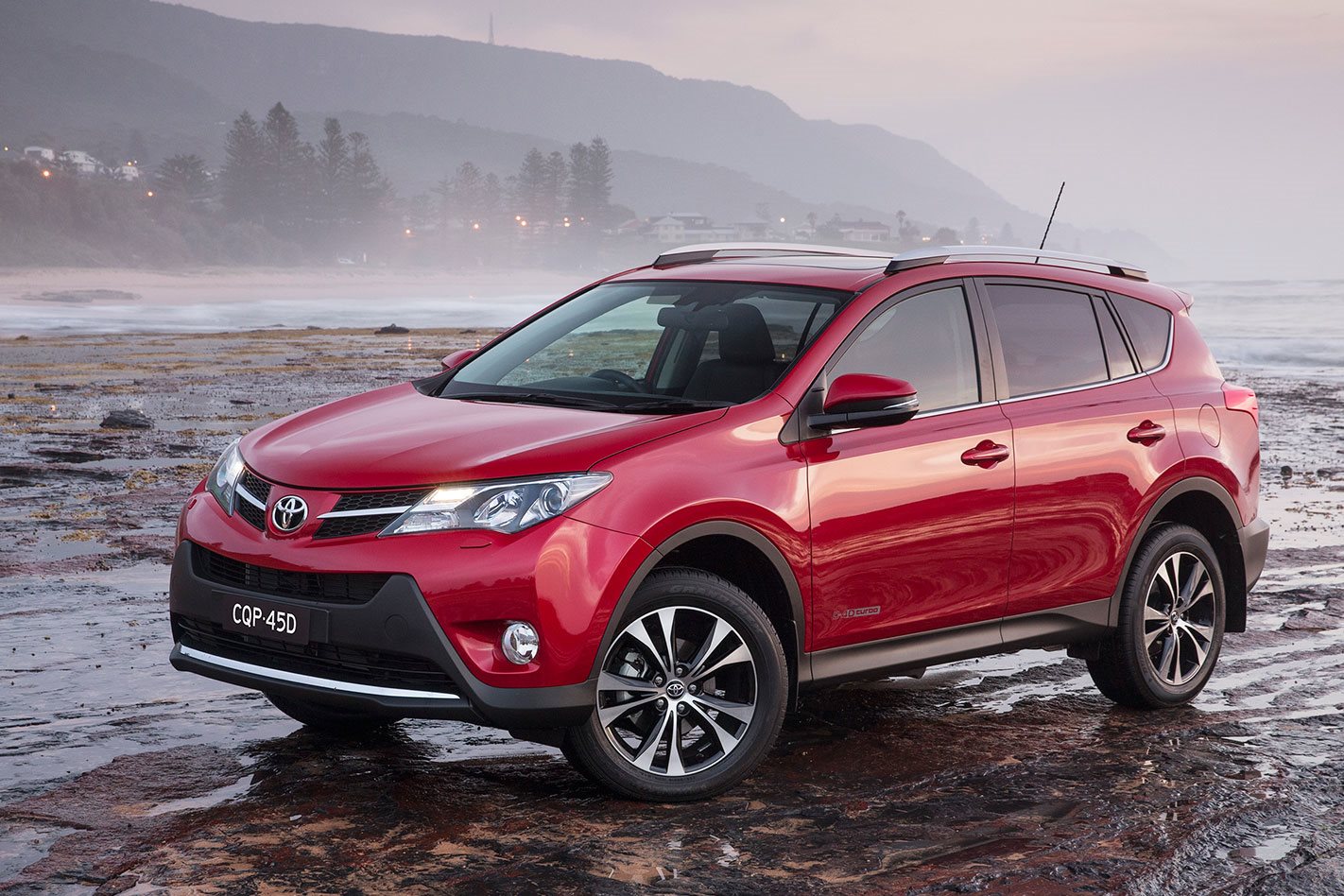