It’s the mildly upgraded Golf Scirocco R. Dangling precariously on the edge of banishment from the Australian market for 2015, only a positive reaction to OS news of this update from fans and press types saved it.

Looking at it dispassionately, it’s a Golf GTI in a pretty new dress. And it’s quite an old Golf GTI – the underpinnings are essentially those from the Mk V. A 2.0-litre turbocharged four-potter makes 188kW and 350Nm, so it’s pretty handy. It’s a four-seat-only proposition, though. 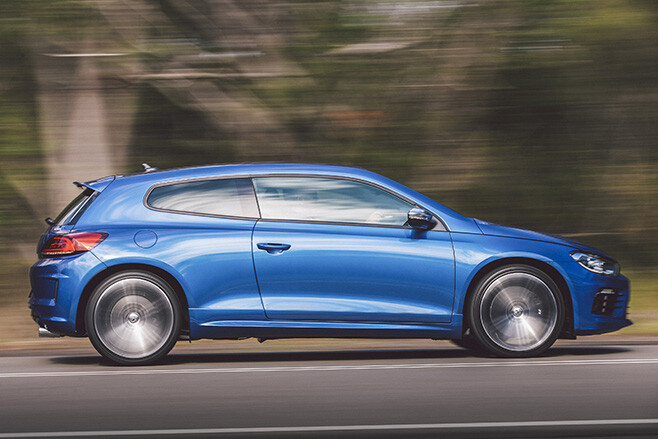 Let’s face it – the Golf is a pretty handy thing, but it still looks like a regular hatchback. The flat, sleek Scirocco does not, and that’s the attraction. You’re also buying into a bit of VW performance history, if that’s your thing.

Not a lot, if we’re honest. The front and rear lights have been brought up to spec in terms of the corporate message, and there’s a new set of rims (which do look pretty sweet). Inside, an array of gauges on top of the centre console pays homage to its dad, and the dials are new. In a big tick, a rear-view camera is now fitted as standard.

Where the new-gen Golf performance cars are polished and precise, the Sirocco is a bit edgier and more raw. Give the touchy throttle a bit of a tickle, and the front tires squirm and shimmy on the road surface before biting.

The chassis is more firmly tied down than the newer cars, and it comes equipped with three-stage adaptive dampers as standard. While the Scirocco might not feel as composed and as polished as a Golf R, it feels a lot more alive.

Its mechanical steering is (surprisingly) slower-geared and more dim-witted than its electric counterpart; the Scirocco needs a firm hand at the tiller.

The six-speed DSG is an older model unit, and it feels like it; its final tune lacks the precision and subtlety of later-model DSG boxes.  The Scirocco is one modern car that really benefits from a six speed manual. 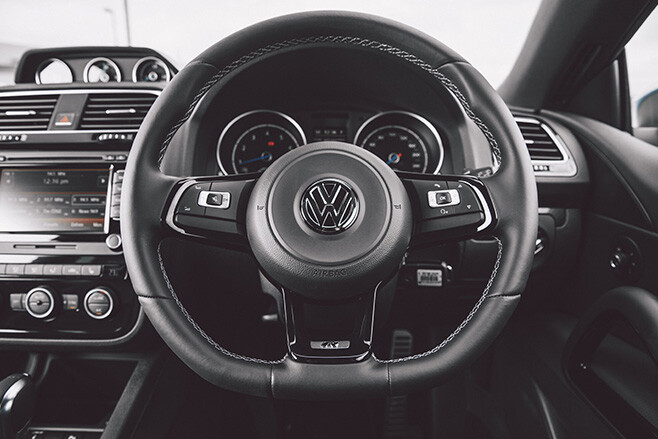 Great. There’s plenty of room behind the wheel, you can knock the shocks into Comfort mode, and the exhaust note is pleasant and unobtrusive when you’re just pootling along – something that can’t be said for the Golf R, for example.

It is an oddly shaped little hatch, which means that cargo carrying is a bit compromised.

There’s none of the modern electronic devices (like radar cruise and blindspot monitors) you might expect at this price, either.

Too-short sun visors, lack of storage in the door pockets and higher-than-expected levels of road noise from the tyres. The low roofline, narrow side rear windows, and large headrests on the back seats also means visibility is a bit pants, too.

The DSG-equipped version is $48,490. For something that’s a little bit left of centre and goes this well, it’s definitely worth considering.

Would you take the VW Scirocco or the Renault Megane RS265?

Hmm. Tough call. The Renault’s chassis will go down in history as one of the greats – but it’s even older than the Scirocco, and it’s not as civilised around town. The VW gets it by a nose.

Click here to find out more about the Volkswagen Scirocco R.