It’s a tough segment these days, the small SUV category, and the Trax has been playing in it for a long time now. Does it still have what it takes to keep up with the pack?

The Holden Trax was one of the first modern compact SUVs to enter the market, but, with the current generation having gone on sale way back in 2013, the Trax’s time in showrooms now works against it.

It’s not the oldest option in the segment – that award goes to the thoroughly ancient Mitsubishi ASX, but there are now a myriad of other, much fresher options for buyers to choose from. It’s a tough market for a car that’s now six years old.

How much is the Holden Trax LTZ?

The LTZ is the highest grade available in the Trax range, and retails for $30,490 before on-road costs. It sits at the high end of the compact SUV market, but nevertheless undercuts top-spec versions of the Honda HR-V, Hyundai Kona, Mazda CX-3 and Nissan Juke.

While lower-spec versions of the Trax are more attainable for buyers looking for their first car, or who are upsizing to an SUV from a conventional small hatch or sedan, the Trax LTZ will probably find more favour among older folks looking to downsize from a bigger SUV or sedan/wagon.

Whatever the case may be, though, the bulk of those buyers will likely be drawn to the Trax’s very tall seating position, which affords the driver a jacked-up vantage point without requiring the mass or expense of a full-size SUV.

Is the Holden Trax LTZ easy to live with?

The Trax’s footprint on the road is modest, roughly equivalent to that of the average small hatchback like a Corolla. The biggest dimensional difference, however, is height – the Trax is incredibly tall.

And that’s really the Trax’s calling card. Its elevated body and high seating position allows the driver a commanding view of the road ahead, while also giving easy access to the rear seat for strapping in kids. For many people considering an SUV, a high H-point – or the height of a seated occupant’s hips above the road – is paramount.

The LTZ is equipped with faux-leather upholstery which admittedly isn’t too bad as far as synthetic hide goes, and there’s reasonable comfort from the front seats – which are heated in the LTZ too.

Cabin width isn’t huge though, given the Trax’s light car underpinnings, and that serves to only enhance the car’s feeling of tallness. Even with the LTZ’s standard sunroof eating away a little bit of available headroom, you could probably still get away with wearing a top hat.

Rear seat comfort is poor, however. A very upright seating position with flat and horizontal seat cushions means it’s not a space you’d want to be in for any great length of time.

However, rear passengers do at least get padded armrests, generous legroom, plenty of headroom, a good view out the side glass, small door pockets for storage and a fold-down centre armrest with a pair of cupholders.

Oh, and there’s also a 230-volt household-style power outlet on the back of the centre console. That’s not a feature you’ll commonly find at this end of the SUV segment, and it means you could conceivably plug in - and use - whatever light-duty household appliance you wish. We question the wisdom of anyone who elects to plug in a sandwich press or hair straightener into their Trax, but it’d be perfect for charging up something like a laptop during a long drive. 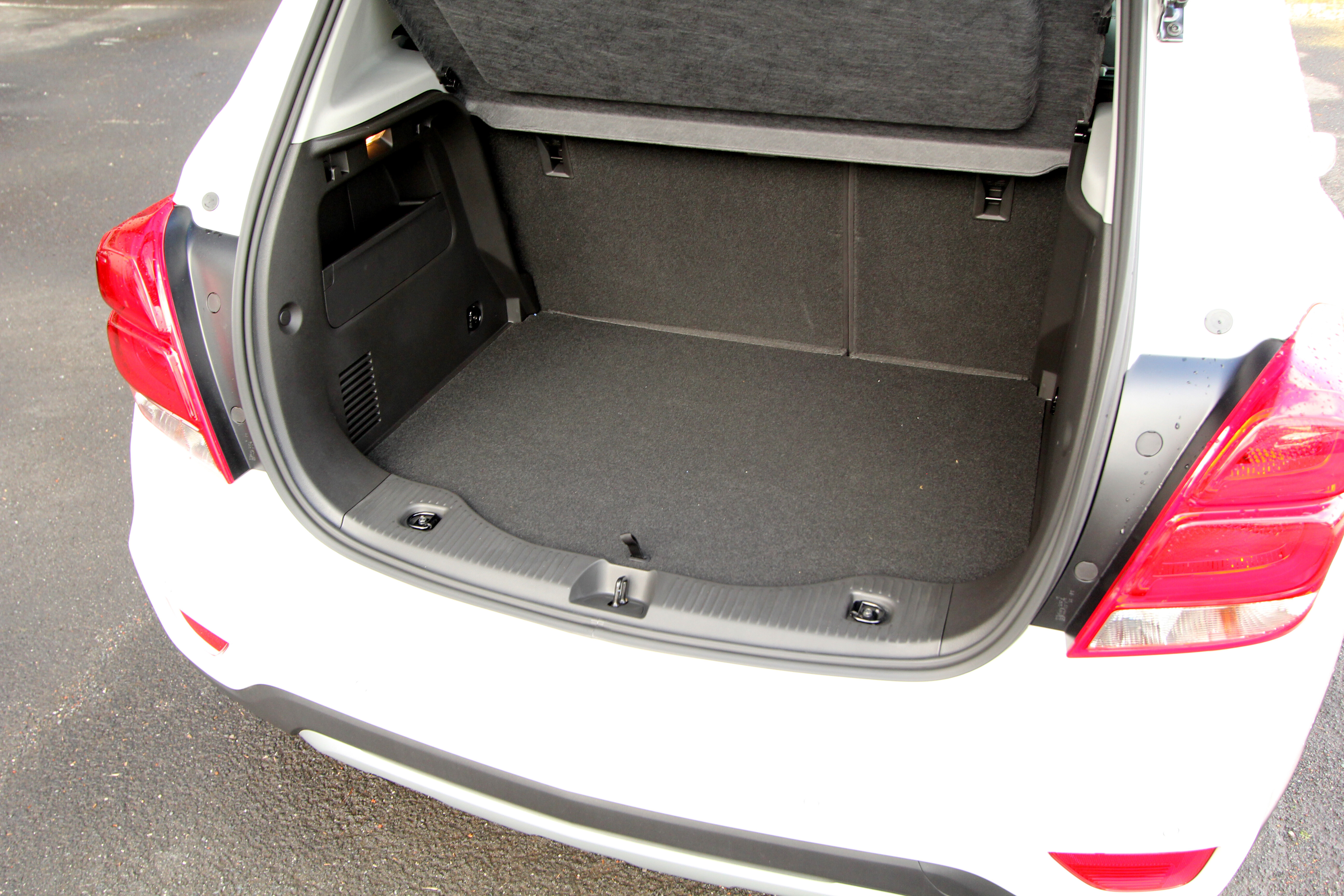 There are other thoughtful features too, like a quartet of shopping bag hooks in the boot (a very much underrated feature), and a full-size steel spare wheel beneath the boot floor. The 356-litre boot is also a useful size, especially for empty-nesters or singletons who don’t need to pack a pram or other large luggage on a regular basis.

However, those positives are let down by a cabin design that not only looks old, but lacks a cohesive style. It’s dated, and the organic bulges of the Trax cabin plastics are nowhere as appealing as the more thoughtfully designed Mazda CX-3 or Toyota C-HR. The infotainment system is also looking a bit old hat, and while Android Auto and Apple CarPlay smartphone mirroring is standard, the absence of a built-in sat-nav system for that colour touchscreen seems a bit stingy at the LTZ’s $30K+ price point, as is the lack of climate control. 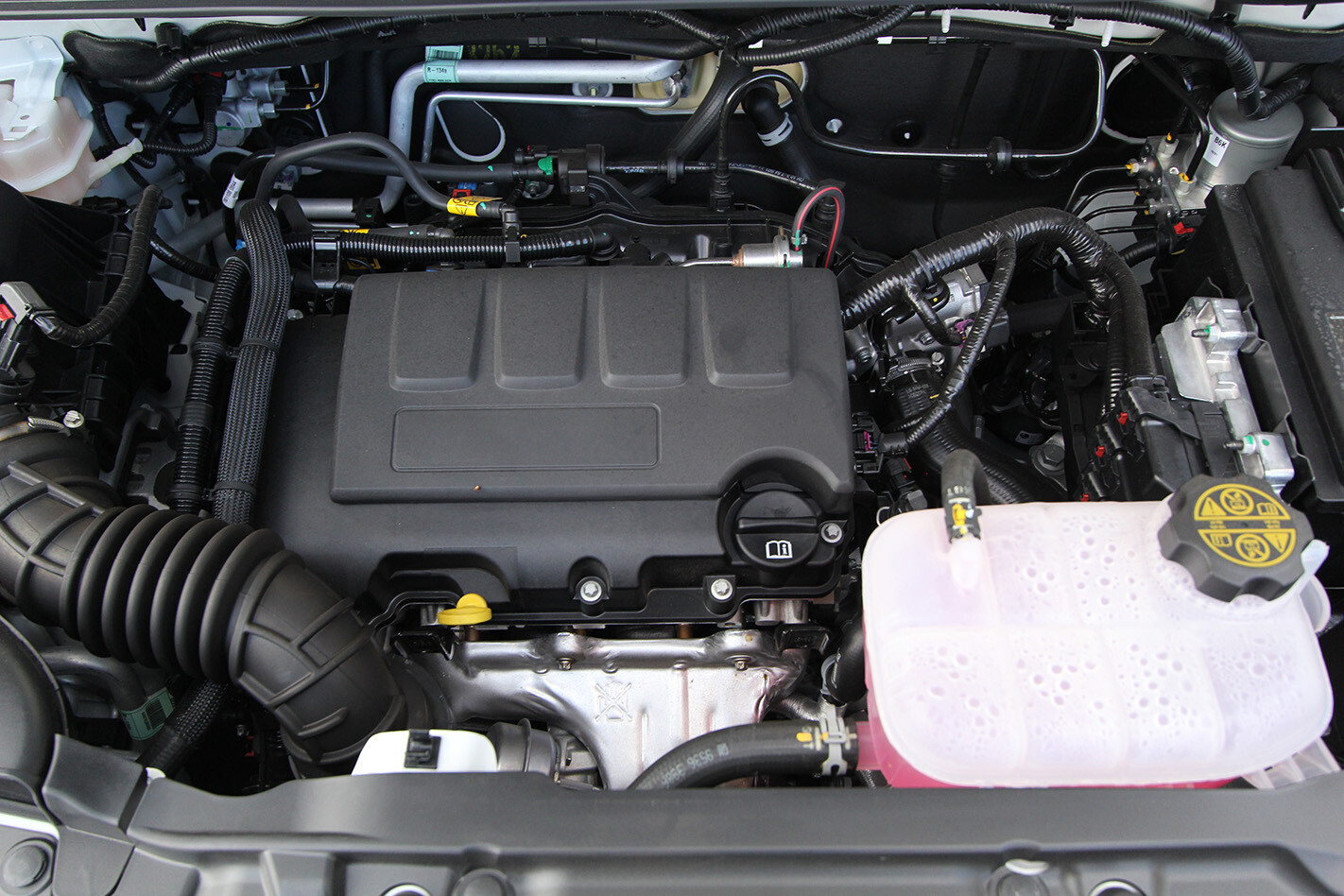 How well does the Holden Trax LTZ drive?

Powered by a 1.4 litre turbo with 103kW and 200Nm, the Trax LTZ has a generally relaxed nature when motoring around town and suburbs. The engine develops plenty of torque down low, and the calibration of its six-speed automatic works well to exploit that.

However, it’s not quite so impressive when you need to put a little more pep in its step, with the engine becoming coarse and noisy at high rpm and the engine being reluctant to kick down and provide you with that extra thrust.

Weighing in just under 1.4 tonnes, the Trax is also heavier than you’d expect what is essentially a high-riding front-wheel drive hatchback to weigh, and it’s that mass that blunts its performance.

That said, the Trax LTZ actually handles quite well. A well-tuned suspension and surprisingly accurate steering means there’s actually some enjoyment to be had if the road gets twisty, and taut body control translates into stable and predictable handling – this SUV definitely doesn’t wallow like a boat in choppy waters.

But the other side of that coin is an overly firm ride on urban roads. You’ll sense a restlessness with this suspension as it wants to react to every bump, no matter how minor, which can get tiring the longer you spend behind the wheel.

Ride comfort, then, could certainly be improved – rivals like the Honda HR-V, Mazda CX-3 and Toyota C-HR do it better.

The Trax is showing its age somewhat, and while it’s a decent buy in less-expensive lower grades, the top-spec LTZ isn’t quite as competitive as it should be given what else now exists in the segment.

It handles roads well and boasts a generously-sized cabin, and that tall seating position will no doubt be a huge drawcard for many small SUV shoppers. Lacklustre engine performance and a stiff ride takes some of that sheen away though, as does a feature fit-out that’s a little inconsistent (why seat heaters, but no climate control?).

On the whole, it’s a middle-of-the-road performer, with a few virtues that are cancelled out by a corresponding number of minuses. Its price is on the wrong side of $30K, but for some the fact that it boasts a good amount of equipment and plenty of space for a little less money than rival range-topping compact SUVS might be enough to earn the Trax LTZ a spot on their shortlist.