Before the dual cab, there was… well, no such thing, really. A ute was just that – a tray with seating for two people in front of it. The notion of carrying extra people in a ute seemed a bit silly.

Fast forward to the present day, and the poor old ute has to do it all – carry people in comfort and safety, handle nicely, go reasonably well and STILL carry a load.

There is something that falls between the pure two-seat ute and the five-up dual cab, and that’s the crew cab (or king cab or extra cab, depending upon who you ask).

We’ve grabbed Mitsubishi’s updated Triton GLX+ crew cab to see how it handles a week in and around the city.

The Triton GLX+ sits in an interesting spot in the line-up. It’s the only Triton that comes with a styleside body (as in a ute tray) and club cab configuration; the only other clubby on the roster is a cab-chassis. At present, Mitsubishi is offering driveaway pricing of $39,990 and an extended seven-year warranty (August 2019), against a regular RRP of $40,490 plus on-roads.

Compare the Toyota HiLux to the Triton, and the $41,865 SR Hi-Rider is the most logical competitor. The HiLux has fewer driver safety aids but more power and torque, while the cheapest Ford Ranger in club cab/styleside guise is $48,340.

Fuel economy-wise, the Triton claims 8.6 litres per 100km on the combined cycle. After 410km of driving, we returned 9.2L/100km. A 75-litre tank gives the Triton a theoretical range of around 870km.

Servicing costs are pretty keen, too, with each of the first three services capped at $299 per service, while Mitsubishi provides – until the middle of next year, at least – a seven-year/150,000km warranty as standard.

There are 17-inch alloy rims, but there is no sports bar or tray liner.

Mechanically, there’s a simple on-the-fly switch to switch between 2WD and 4WD, but the Triton still sports a drum brake-equipped and leaf-sprung rear end.

A few small misses – despite a neat digital screen in the instrument binnacle, it misses out on a digital speedo, while those rear ‘seats’ don’t get top tethers or ISOFIX mounts for baby seats.

Interior dimensions for front seats are identical to those in the dual-cab, but the occupants of the two small, flat jump seats are going to be more squashed. There’s almost 50mm less headroom, more than 10cm less legroom and slightly less shoulder room to boot.

Of note, the crew cab can only tow 3000kg of braked trailer, compared to 3100kg of the dual cab and 3500kg of many of its rivals. However, it can carry 971kg of payload; this is an increase of 25kg than the GLS dual-cab despite being some 27kg lighter. 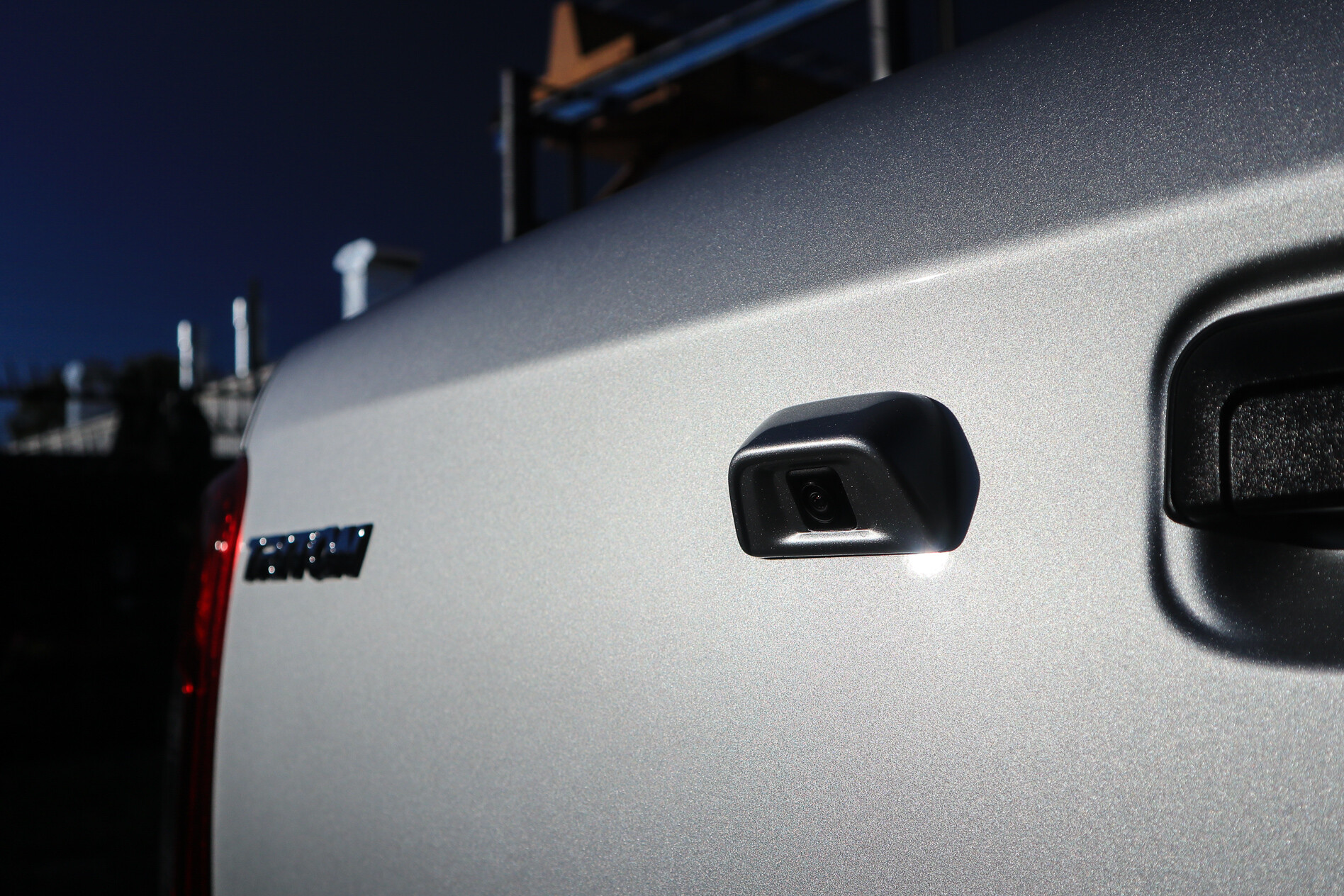 The GLS+ misses out on many of the safety innovations that come standard in the top-spec GLS Premium, and its safety aids are limited to AEB and lane departure warning. It comes with seven airbags, rear parking sensors and a rear-view camera, but as mentioned it doesn’t come with any form of child restraint mounting points.

It still holds a five-star maximum ANCAP score that’s carried over from the previous model Triton.

The Triton’s steering wheel is adjustable for both rake and reach, and the front seats are decently sized and comfortably shaped.

Big tick for storage, too; the front door pockets comfortably swallow larger water bottles, and there’s plenty of room for bits and pieces throughout the cabin.

The rear seats, though, are seats in name only. Accessed through narrow suicide-style doors, rear seaters can only climb in if the front belt isn’t secured.

Once on board, the completely vertical backrest and minimal legroom make it an uncomfortable ride for anyone of regular human dimensions. Dogs will love it, but kids won’t.

Those seats can be flipped up to provide more in-cabin secure storage, and we’d guess that’s where they’ll spend most of their working lives.

Like its competitors, the Triton crew cab ute is tall, narrow and stiffly sprung, which means its handling prowess is always going to be compromised in some way.

The Triton’s rear end is suspended by leaf springs, which are tuned to deal with its 2900kg gross vehicle mass. This means that the 1929kg GLX+ has the ability to carry 971kg of people and payload, and so the suspension has to be tuned to cop that load, whether it’s on board or not.

Overall, the Triton feels firm and fidgety around town, though it stops – just – on the right side of being nervous and skittish. Throw some kit in the back, and it calms down nicely, but carrying more weight means higher fuel consumption.

The steering feel is a bit muffled but generally comparable with its competitors, and its brake feel, too, isn’t amazing, but it’s an easy enough drive around town and out on the highway.

The alloy 2.4-litre direct-injection four-cylinder was, in Mitsubishi’s words, the best diesel engine it could make when it dropped in 2015. Its outputs of 133kW and 430Nm are a little shy of the HiLux and Ranger’s peak values, but it still holds its own thanks to the Triton’s reduced mass when compared to its rivals.

Now combined with a six-speed auto – the only choice for the GLX+ – the small engine does its best work at higher speeds and lower revs. Off-throttle, it all but disappears into the background, and its diesel rattle is well contained when the throttle is mashed again.

It can be caught off-boost, though, exhibiting some turbo lag under 2000rpm. With its peak torque reached at 2500rpm and peak power not long afterwards, it’s a fair-sized torque hole that needs careful management to fill.

Overriding the six-speed with the paddle shifters behind the wheel is one way to overcome it, but it’s definitely not as linear a drive as Ford’s five-cylinder diesel, for example.

Mitsubishi has carved out a profitable niche in the utility space by offering fair value for money at the expense of a smidge of size, and by extending the life of key components like platforms and powertrains.

It also knows where its bread is buttered, and the value of the GLX+ is a standout, thanks to improved multimedia and other features over its rivals and its own stablemates in some cases.

If you need four seats on a regular basis, the crew cab may not be the best choice, especially with kids under seven. If, however, you need a longer tray and a bit of extra security for items like bags and tools, then the Triton GLX+ crew cab is the perfect alternative to its dual-cab siblings.