Nissan’s injected a bit more visual brawn to its volume-selling utility, but is it enough to help the Navara battle its dual-cab rivals?

The Navara is one of Nissan’s top-sellers, sitting behind the popular X-Trail in the Japanese carmaker’s lineup and accounting for around one in four of every Nissan sold in this country.

Yet it’s a middle-of-the-pack performer in the highly competitive commercial ute category. Nissan has given the range a shot in the arm via the arrival of a ruggedised, value-packed high-end variant – the Nissan Navara ST Black Edition - however is that enough to sharpen up Nissan's tough pickup?

Selling at $48,690 drive-away with a six-speed manual or $51,190 drive-away for the seven-speed auto model we’re testing here, the Nissan Navara ST Black Edition is a compelling deal against the ST-grade model it’s based upon (which retails at $47,190 as a manual, $49,490 as an auto). The value-adds are mostly cosmetic (and we’ll detail them in the next section), but for many in the market for a new ute, appearances do matter.

And considering its price point and tough looks, the Black Edition is indeed an attractive thing. Dual-cab 4x4 utes that happen to boast barrel-chested physiques also tend to perform quite well in sales figures, and we wouldn’t be surprised if the big plastic fenders and other exterior add-ons of the Black Edition help make it one of the more popular Navara variants among buyers. 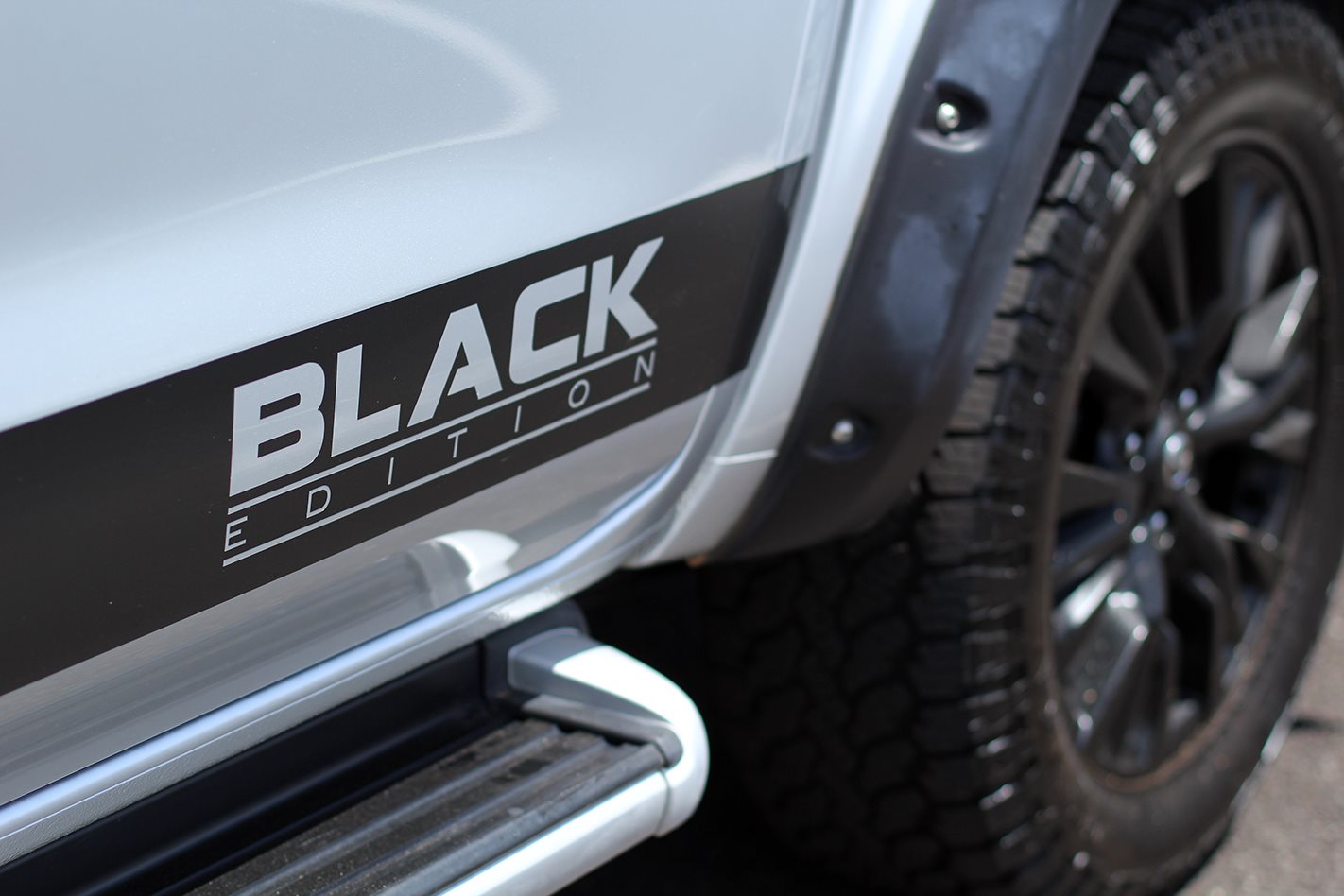 That’s on top of the usual Navara ST inclusions of satellite navigation, LED headlamps, a reversing camera, air conditioning, power windows and cruise control. A solid list with all of the basics covered, but the 7-inch infotainment headunit is showing its age with sluggish responses and unavailability of Android Auto/Apple Carplay smartphone mirroring. 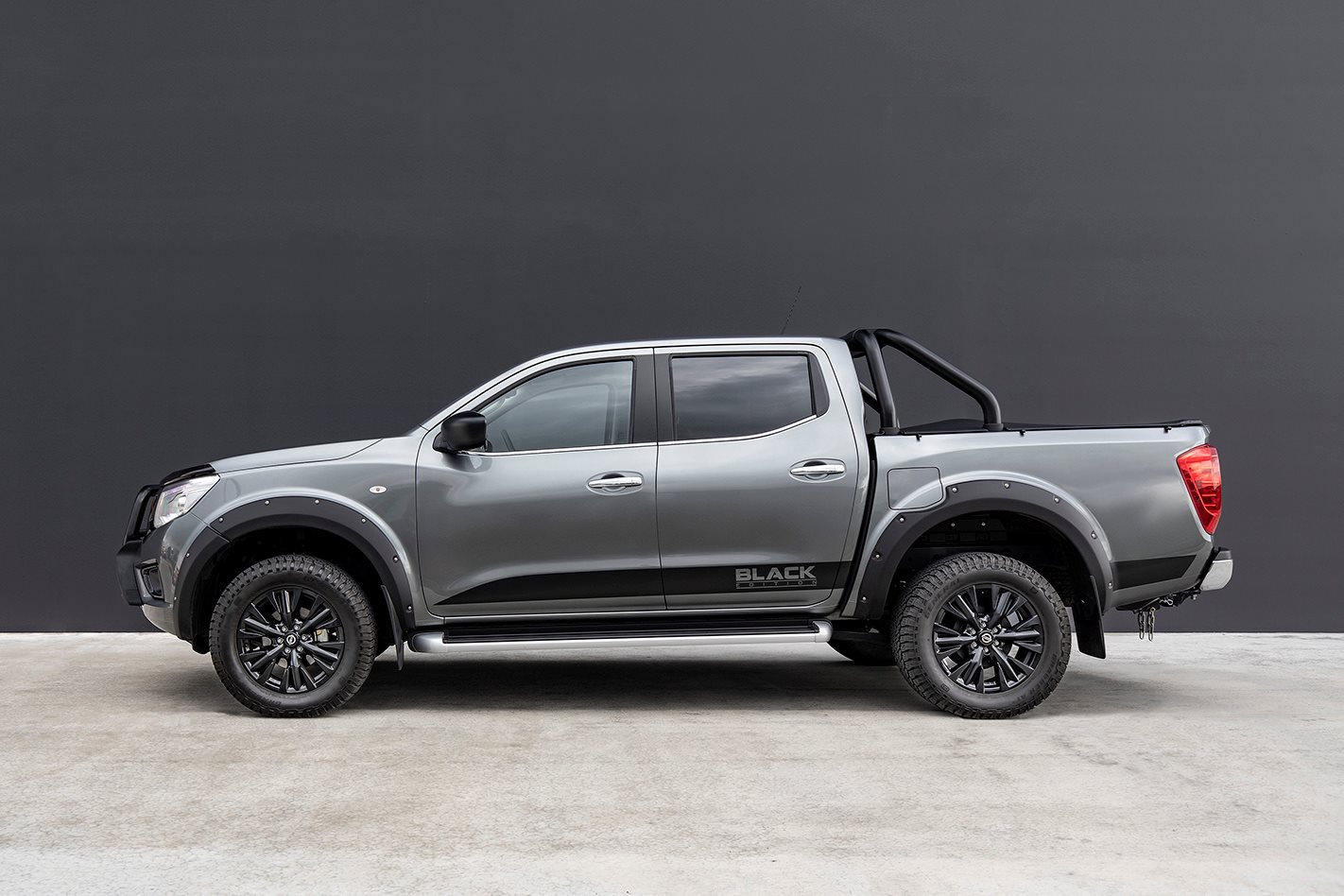 The Navara is sized to compete with the rest of the 4x4 dual-cab flock, with a 5.25m by 1.85m ‘footprint’ allowing plenty of cabin space and cargo space. That said, while the tub’s length, width and height of 1.50m, 1.56m and 0.47m sound generous, the 1.13 metre gap between the rear wheelarches isn’t wide enough to accommodate an Australian standard pallet.

Maximum payload is 968kg for the automatic tested here, while towing capacity comes in at 750kg for an unbraked trailer and 3500kg for one with trailer brakes. 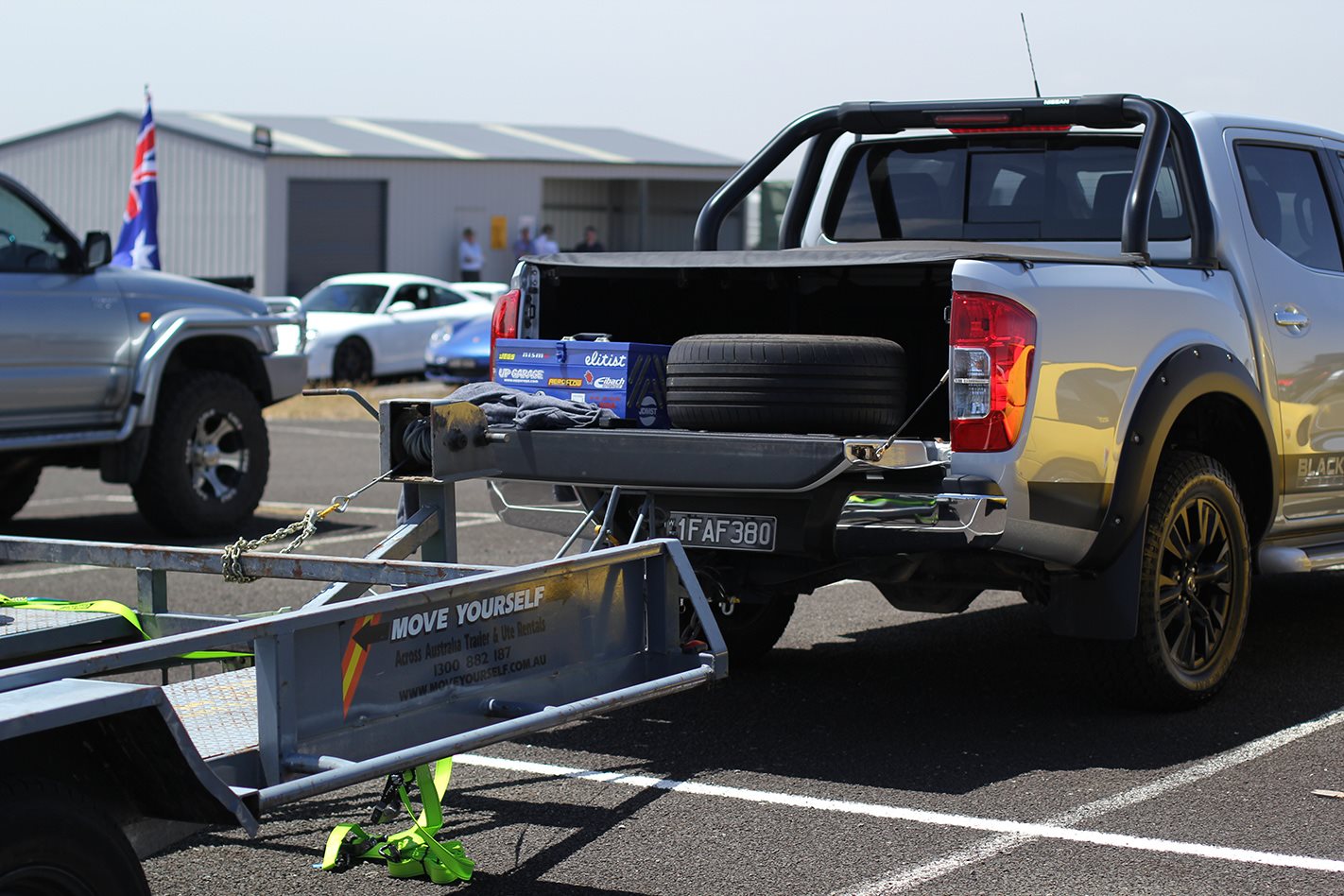 As standard, the Nissan Navara comes with stability control, ABS, EBD, brake assist, traction control, a reversing camera and six airbags – front, front side, driver’s knee and full-length curtain. However for the ST grade that the Black Edition is based upon, rear parking sensors are not available nor is the 360-degreee parking camera of the top-grade ST-X.

Additionally no Navara is available with autonomous emergency braking, a safety feature that is slowly making its way from passenger cars into the light commercial vehicle segment and is already present on the Nissan’s platform-mate, the Mercedes-Benz X-Class.

The Navara’s cabin is due for a redesign. Though functional, the presentation is dated and there are certainly opportunities to boost the usefulness of this interior through the application of more intelligent design.

For one, the storage trays at the top and bottom of the centre stack are made of hard, slippery plastic that sees devices slide around on every corner, while the shape of the horn pad can have you inadvertently honking whenever turning the wheel from lock-to-lock – but at least the steering wheel is clad in hard-wearing leather rather than bare urethane. 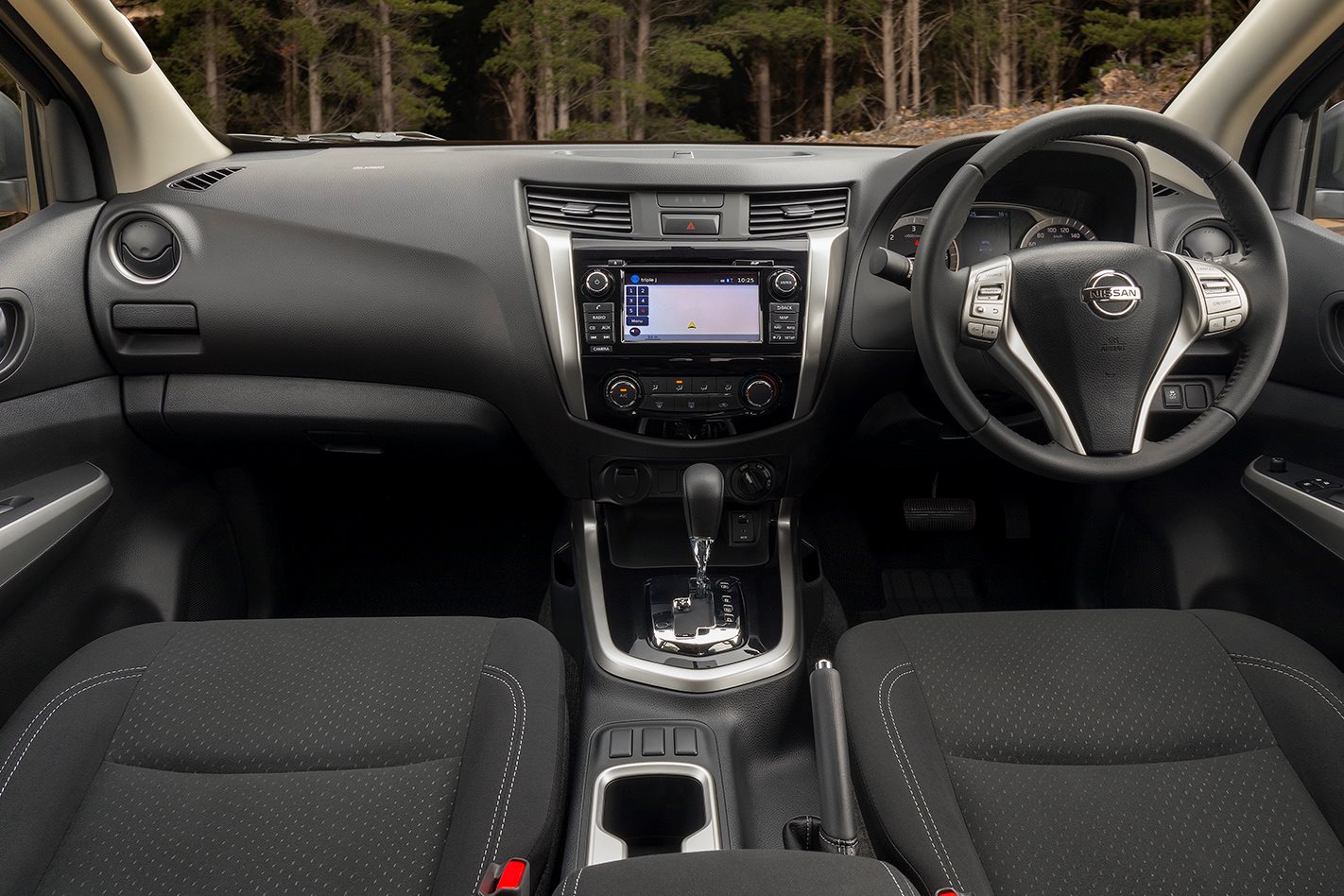 For the Black Edition, the only real addition to the interior is a fairly flimsy multi-fit phone holder that slips into one of the centre console cupholders, which thus places the phone too low in the cabin to make it useful as a defacto sat-nav unit.

There are air vents on the back of the centre console for your back seaters, however, and the rear bench is indeed spacious enough for a couple of – or even three – fullgrowns, although there are no cupholders or 12V/USB charge ports for them. The electric centre panel of the rear glass can slide to the side to get plenty of cross-flow through the cabin when the front windows are wound down, however, which is nice.

Overall, it’s a middle-of-the-road ute in terms of its interior. Vehicles like the X-Class and Volkswagen Amarok boast better quality and design flair, though both do come with a price premium over the Nissan. 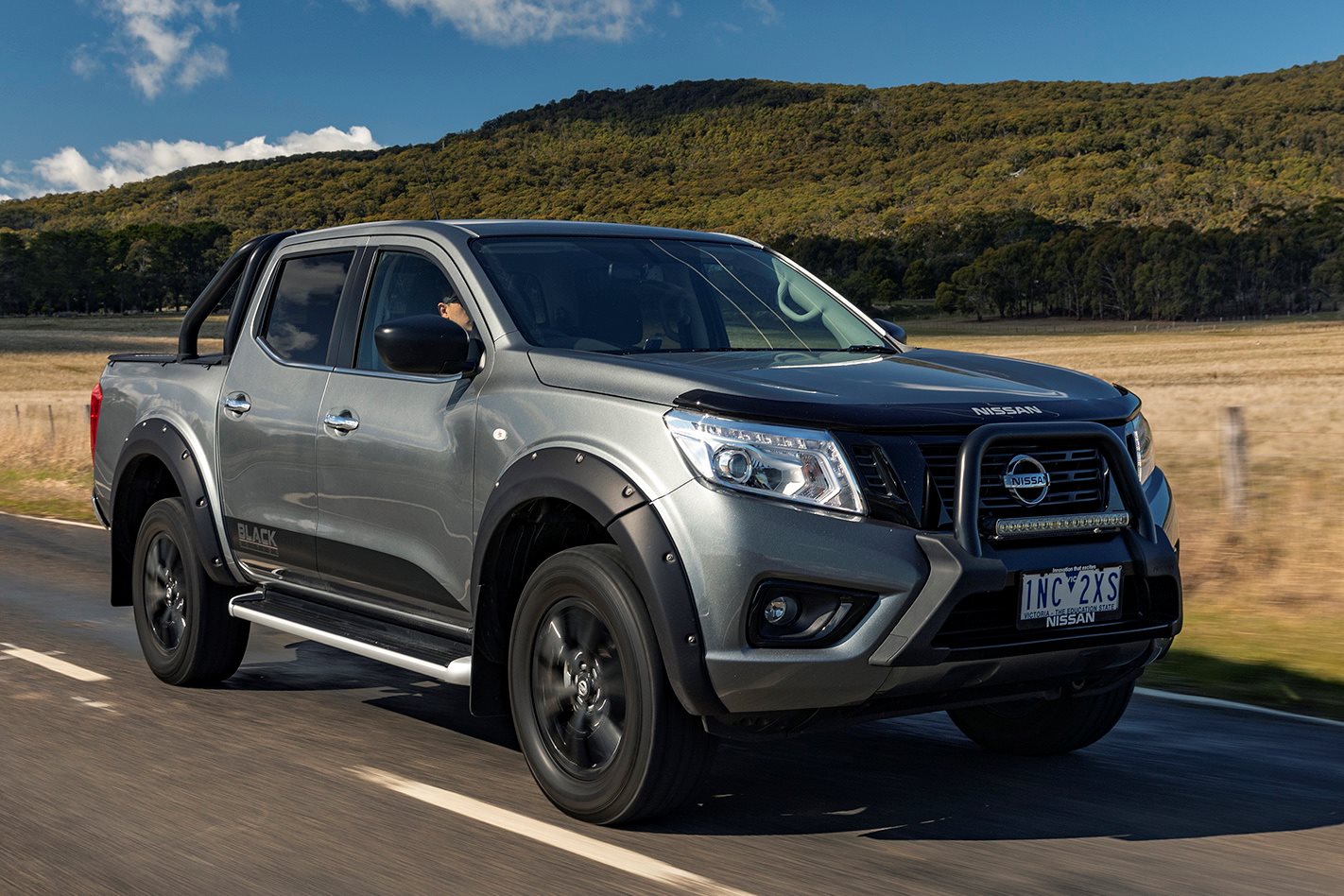 One thing that always surfaces when we review the Navara is how its on-road ride doesn’t match up with expectations. After all, the Navara dual-cab boasts a coil-sprung rear axle rather than the leaf-sprung arrangement that’s far more common in the ladder-frame ute class. With that kind of configuration most people expect a greater level of refinement, comfort and handling, but in the Navara’s case that’s not true.

Often feeling unsettled at higher speeds the Navara could benefit from better suspension tuning to tame its on-road manners, but we decided to take a different tactic when reviewing this particular Navara – we wanted to see whether hitching a bit of weight to the towbar might change things. 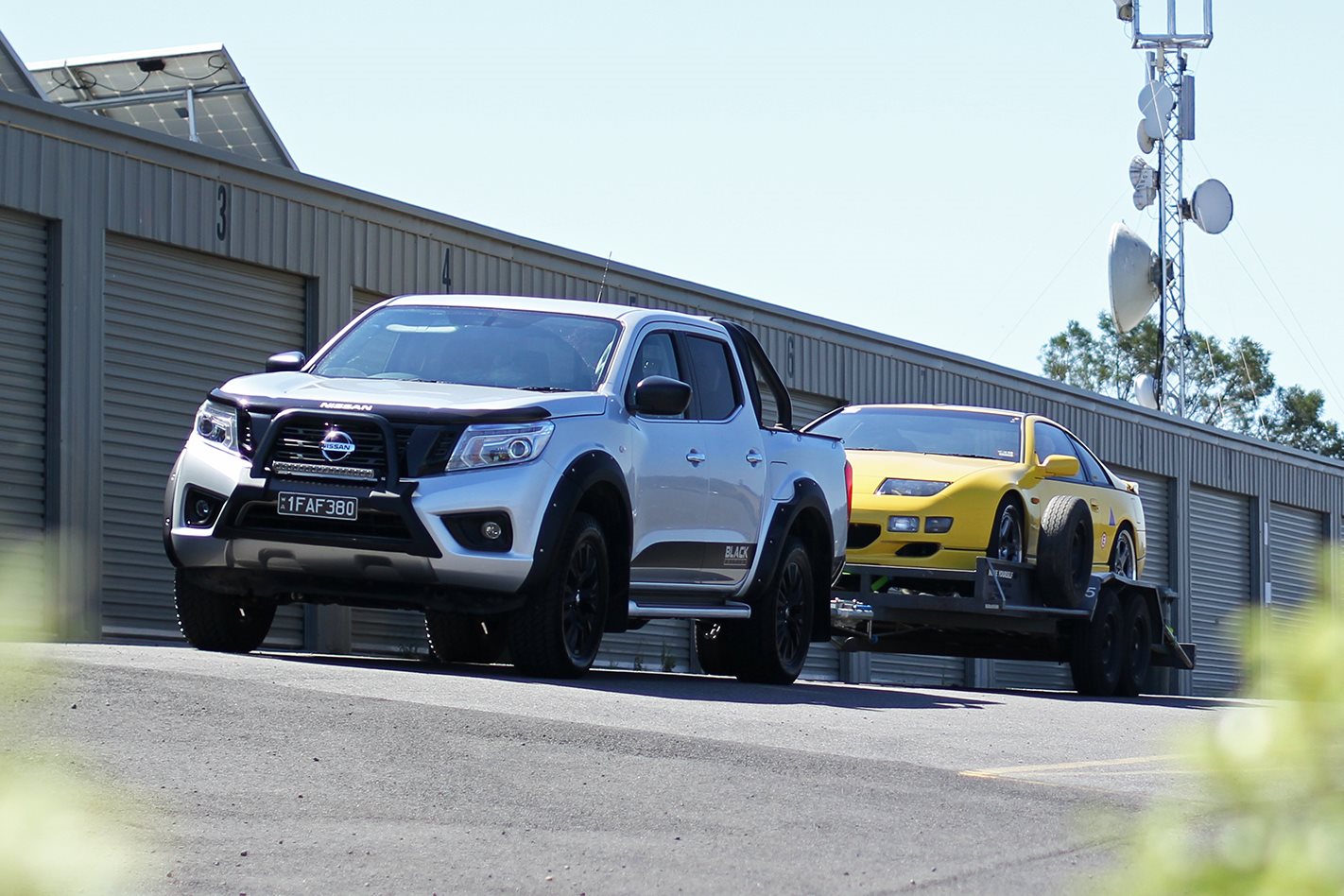 A track day formed a convenient excuse to do so, and with a trailer weighing a couple of hundred kilos carrying a car weighing a further 1300-odd kilos the Navara certainly felt a lot more composed. With a substantial towball download pushing the rear down, that highway-speed lateral sway and chassis shimmy mostly disappears – as does its propensity to over-react to bumps.

However, towing heavy stuff like another car predictably takes some of the sheen off the engine. While perky and responsive when unladen, the Navara’s 2.3-litre diesel stuggles to maintain momentum up mild grades despite its lag-reducing twin-turbo technology.

Bigger engines may feel more relaxed in such scenarios, but if all you need is to carry 200-400kg of tools and other hardware in the tub then the Navara’s powertrain – and its seven-speed automatic – should supply all the oomph you need. Meanwhile the extra weight should alter that rear suspension’s character for the better (though obviously at the cost of fuel economy). 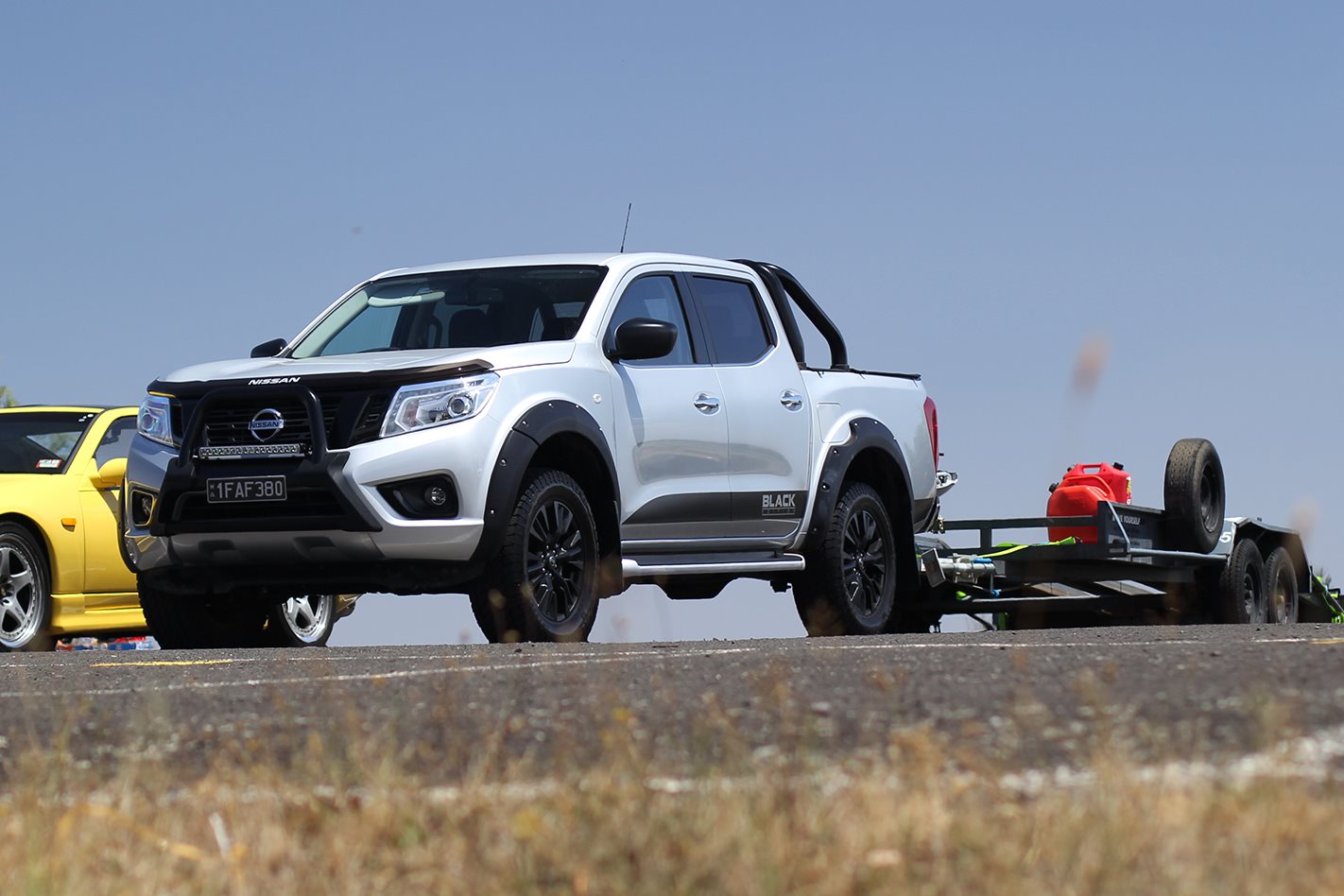 The Nissan Navara Black Edition is far from a dud. From a value standpoint it’s a compelling thing, and while it’s still not a dynamic winner within its segment it’s perfectly fine for travelling from home to worksite with plenty of gear in the back – or towed behind.

But we have to admit that the juiced-up exterior really does play to the wants and needs of the ute-buying crowd rather well. It stands out against the sea of vanilla-spec utes that fill Australian roads, and for the self-respecting tradie that’s certainly important.

Buyers will need to test-drive to see if the Navara’s ride is up to their own personal standard, but in this writer’s opinion it’s the Navara’s fairly ordinary interior and ancient infotainment that are more niggling issues from an ownership point of view. If that doesn’t bother you, the Navara Black Edition certainly warrants a look. 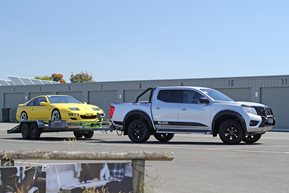 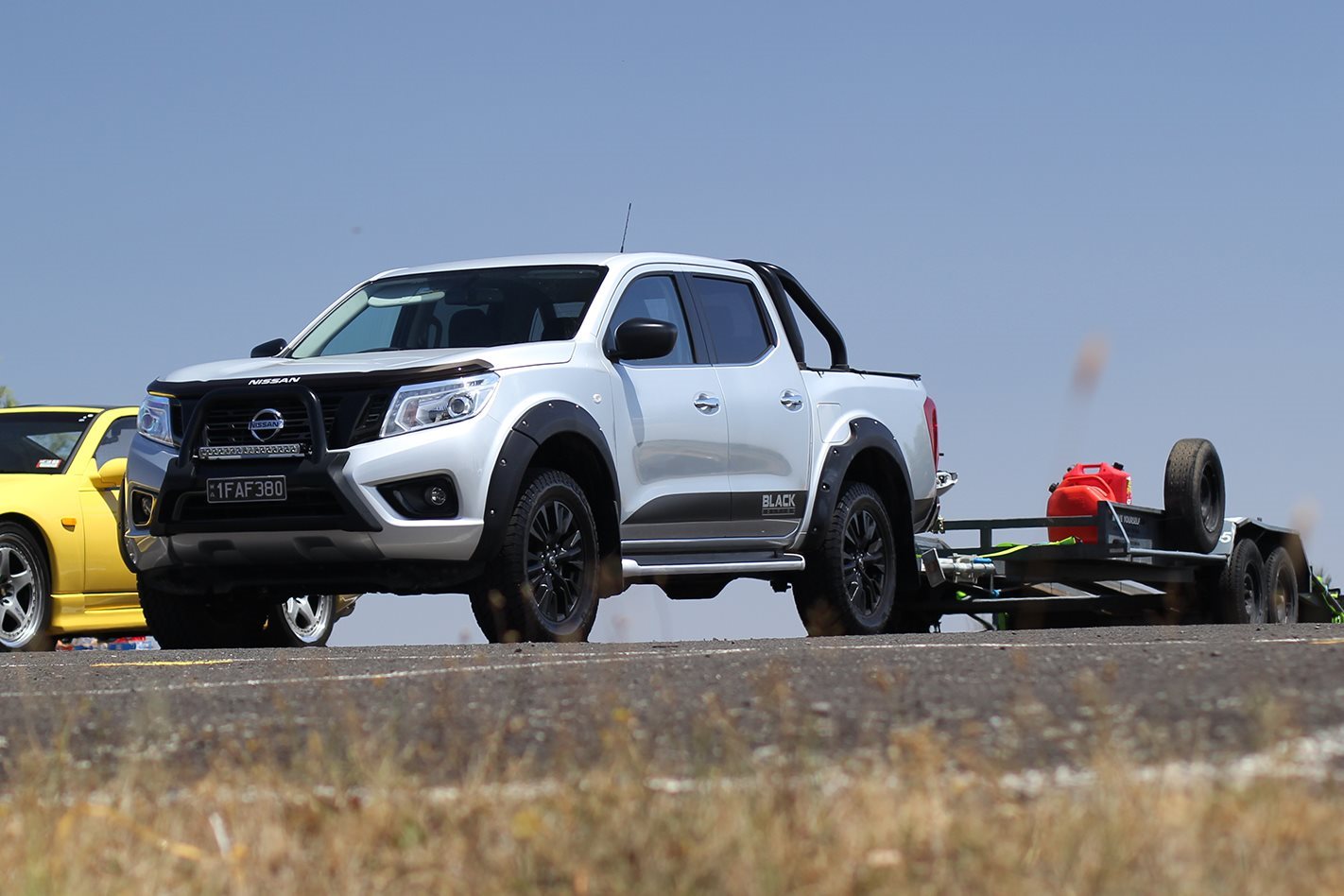 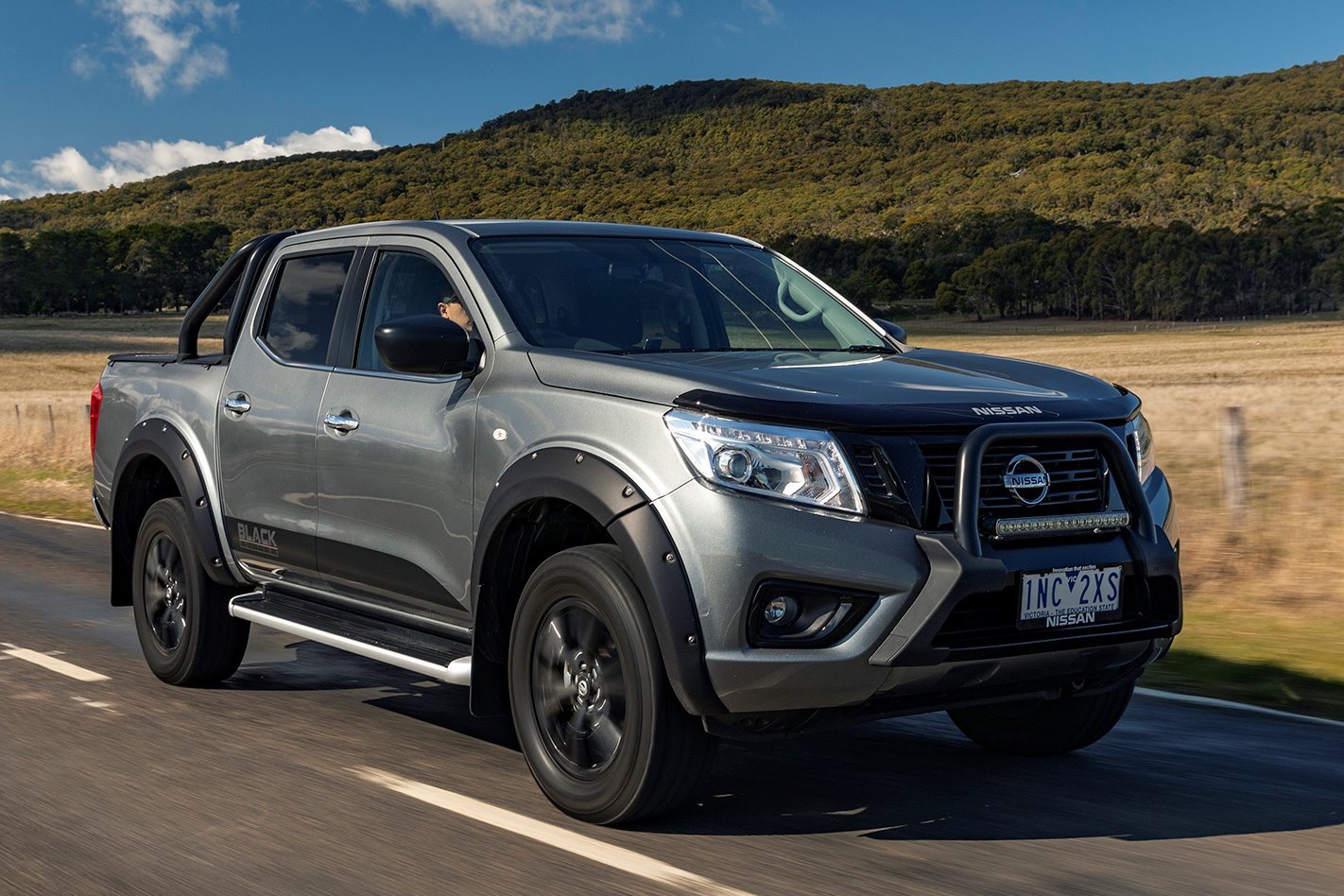 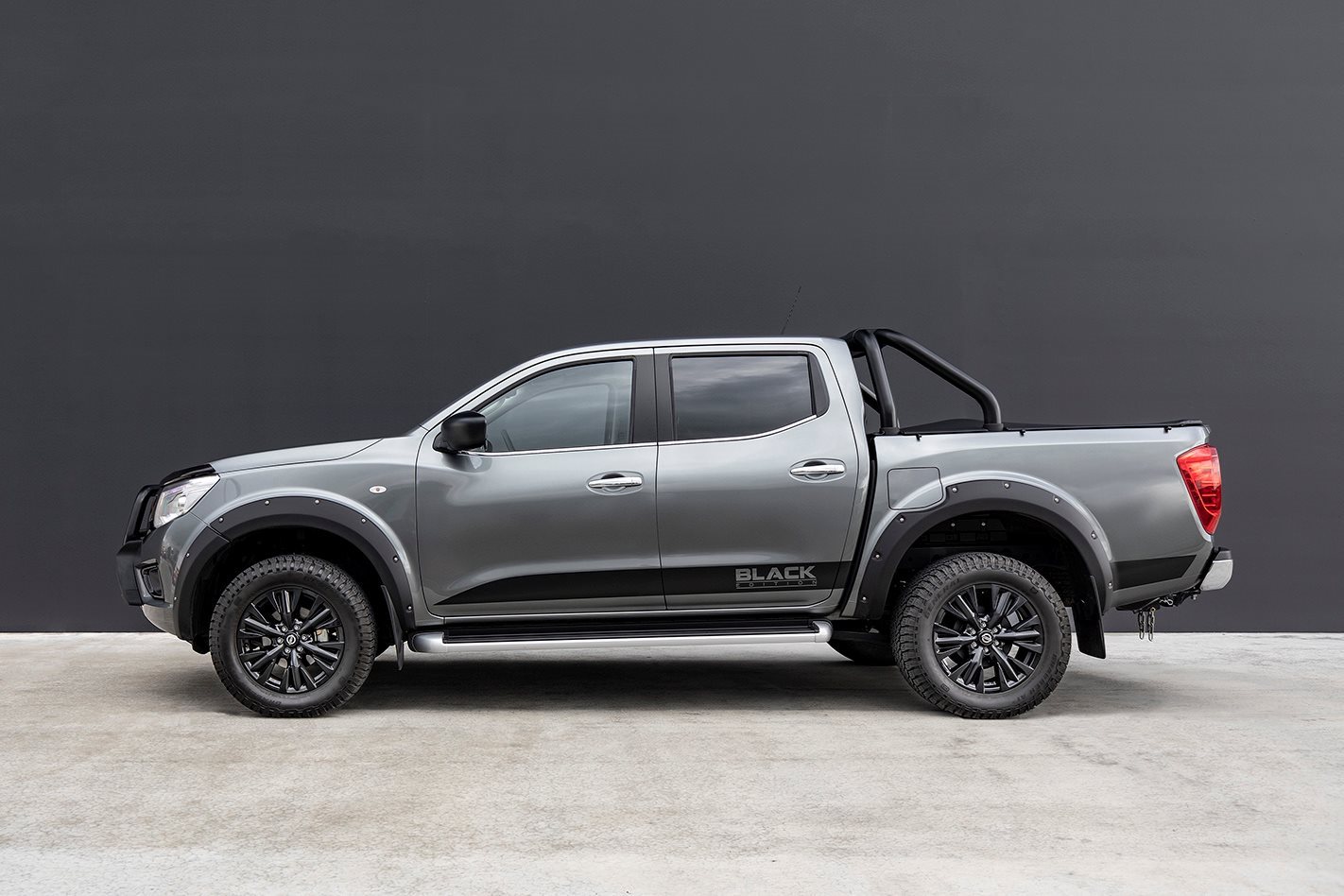 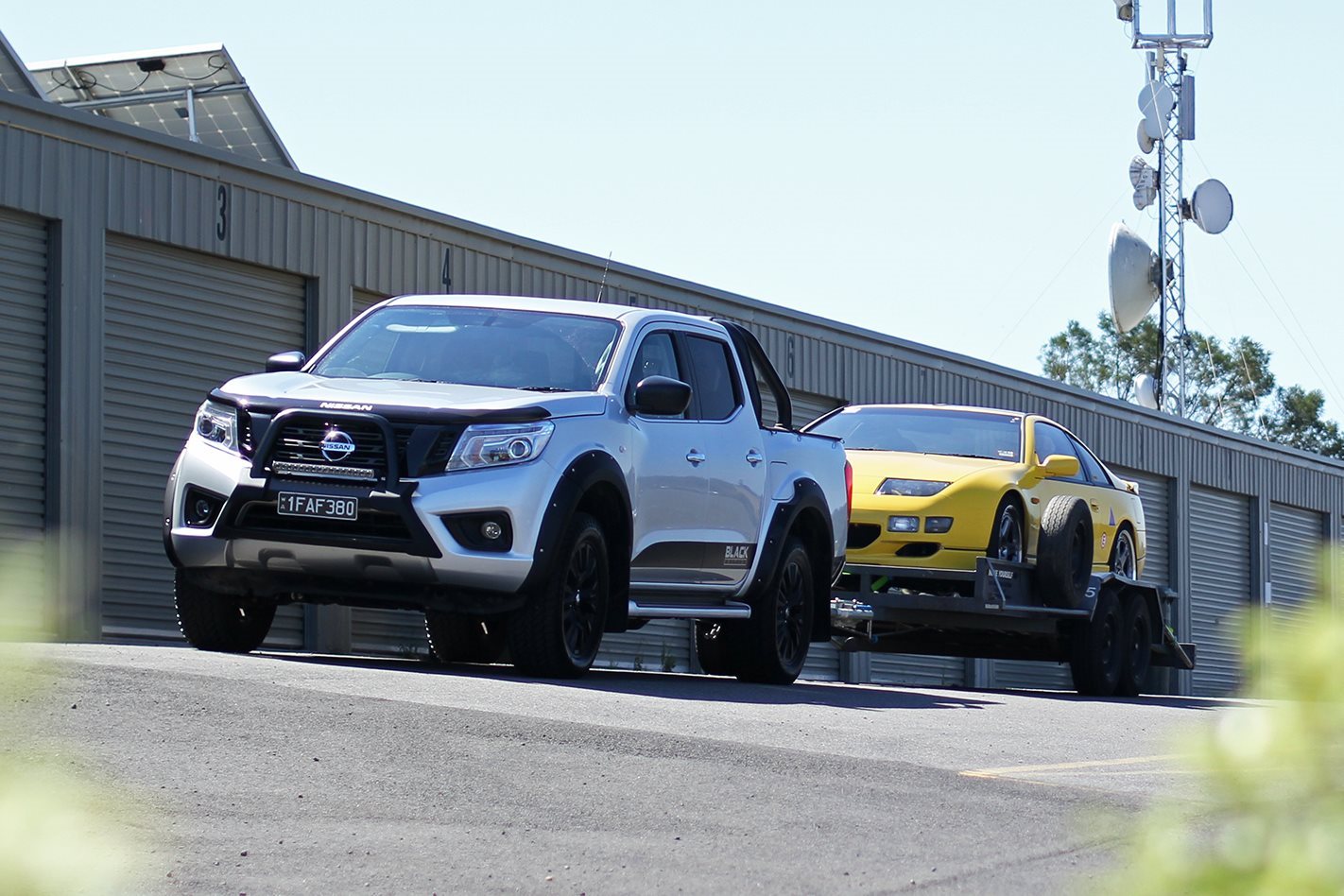 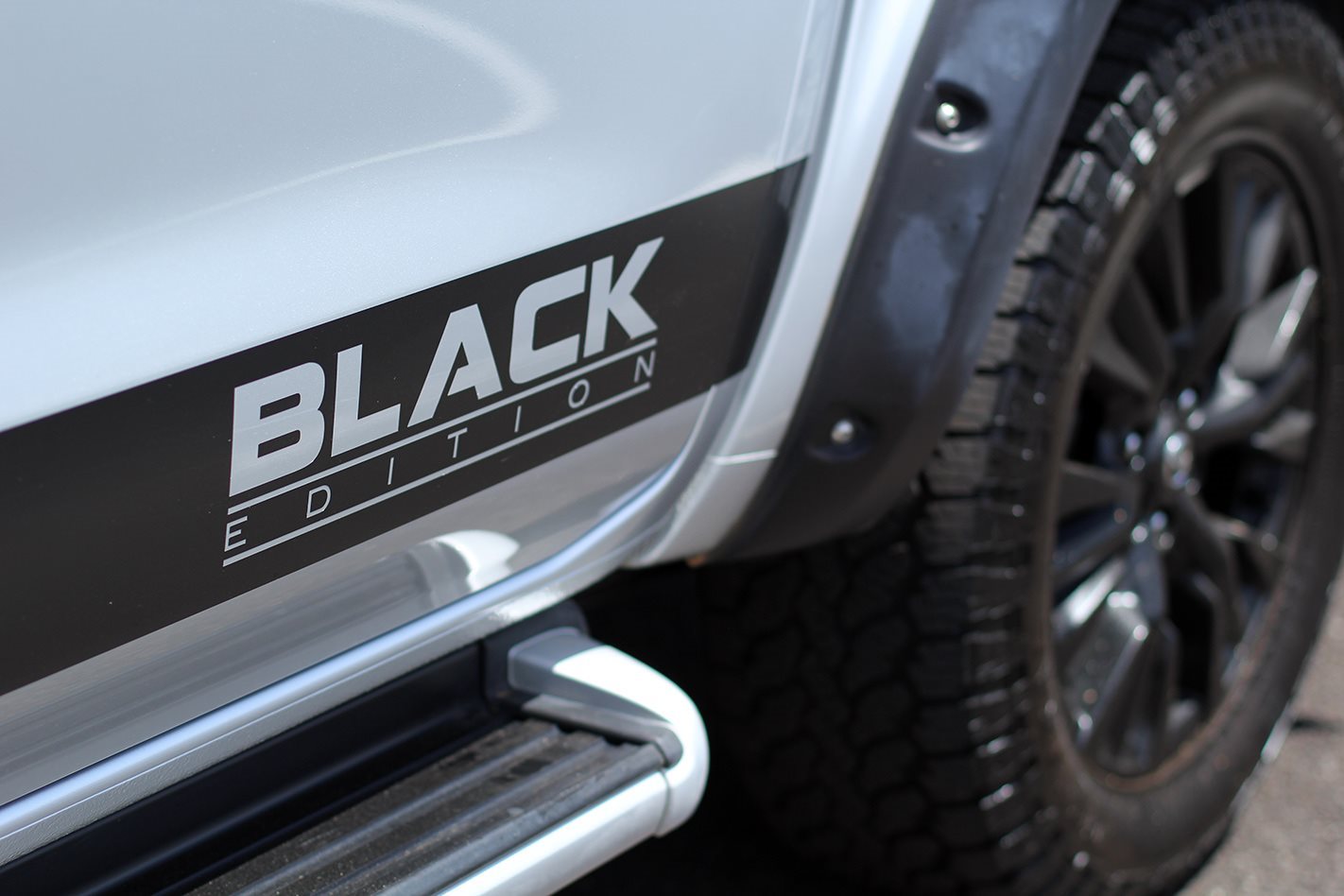 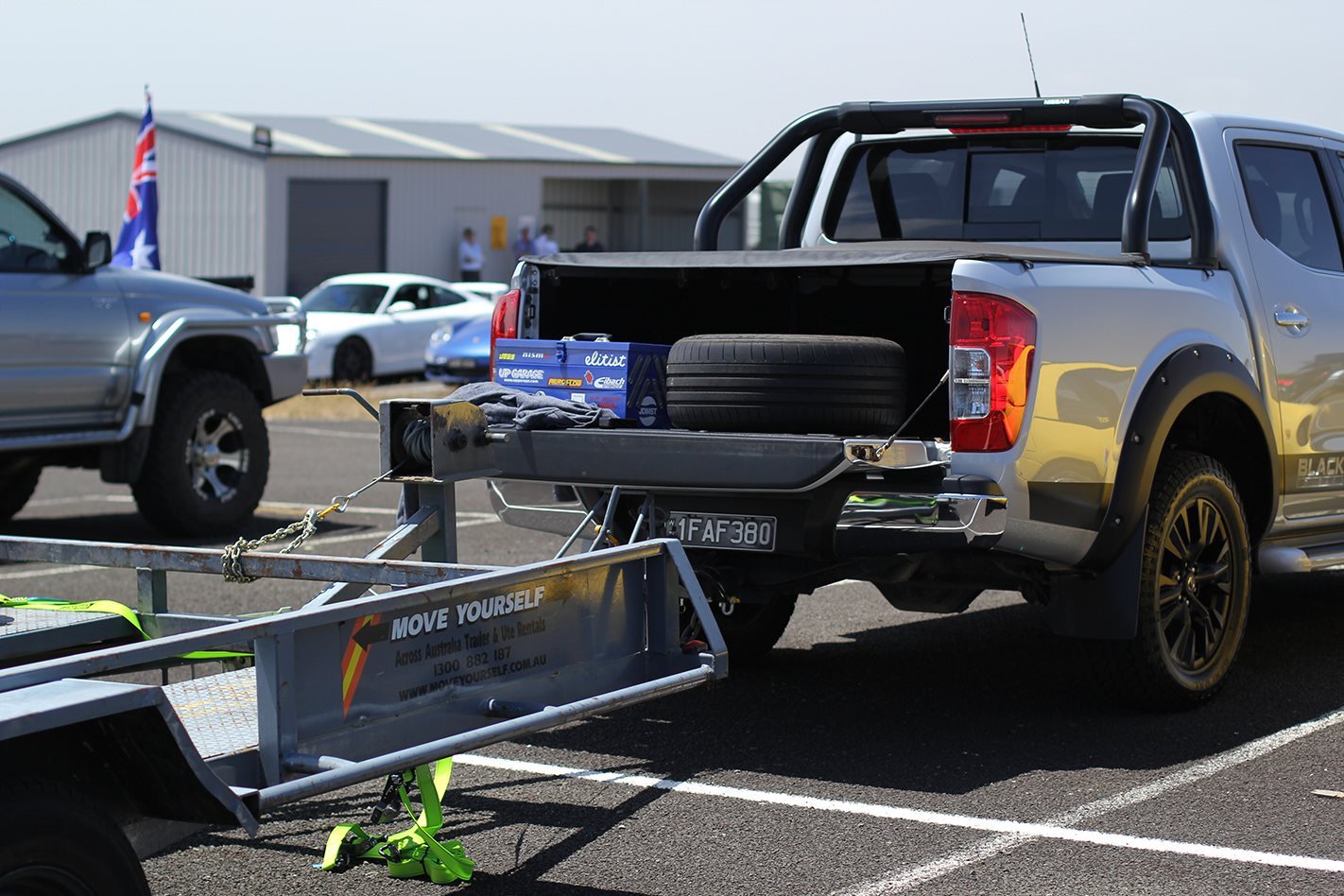 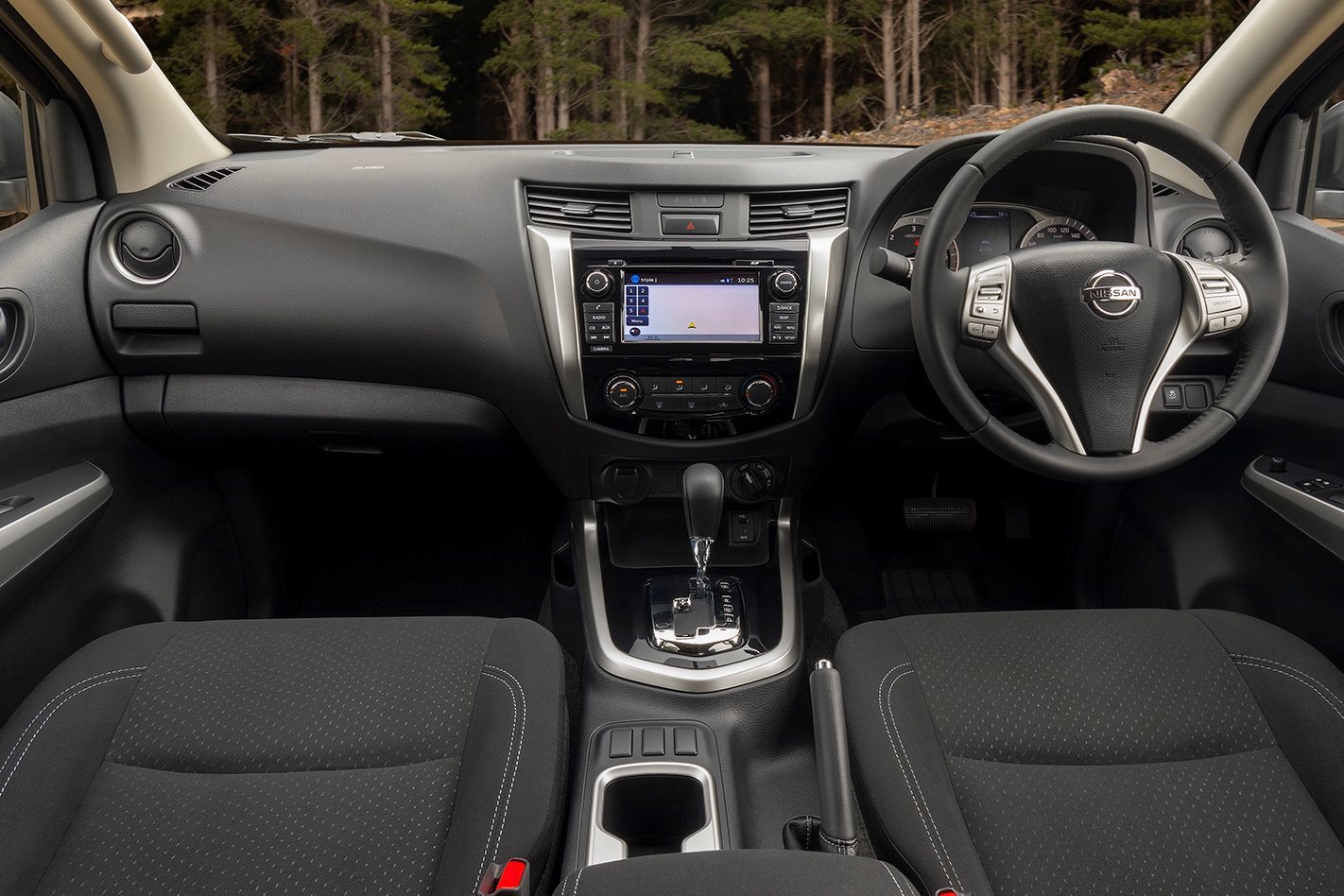